In recent decades, lung cancer has become a critical global health concern affecting an increasing number of people, as well as the leading cause of cancer-related mortality in China (1). In many cases, lung cancer patients need a surgical operation to remove the tumor. Owing to advances in medical technologies over the last decade, traditional wide-exposure, open surgery has been replaced by minimally invasive thoracic surgery (2). Video-assisted thoracic surgery (VATS) has matured into a reproducible, standardized procedure for the removal of pulmonary nodules. In spite of such advances in medical technology, a disequilibrium still exists between the perpetually increasing demand for operations and the limited supply of healthcare resources, including operating rooms and experienced surgical staff. Therefore, maximizing the operational efficiency and utilization of operating rooms is vital and significant.

In this study, we endeavored to solve the problem of disequilibrium between the ever-increasing demand for operations and the limited supply of healthcare resources by introducing barn-integrated operating room into the realm of general thoracic surgery. In specialized Chinese hospitals like Shanghai Pulmonary Hospital, most surgeries performed are a single type of uniportal video-assisted thoracic surgery (uniVATS), during which the risk of airborne spread are low.

However, for multiple operations to take place simultaneously in a single open space, proper ventilation of the physical space is crucial in providing protection against cross-contamination that in a traditional operating room would normally be provided by walls. Also, it is of critical importance that energy-efficient strategies that would decrease operating costs as well as achieve an acceptable level of contamination control are considered. 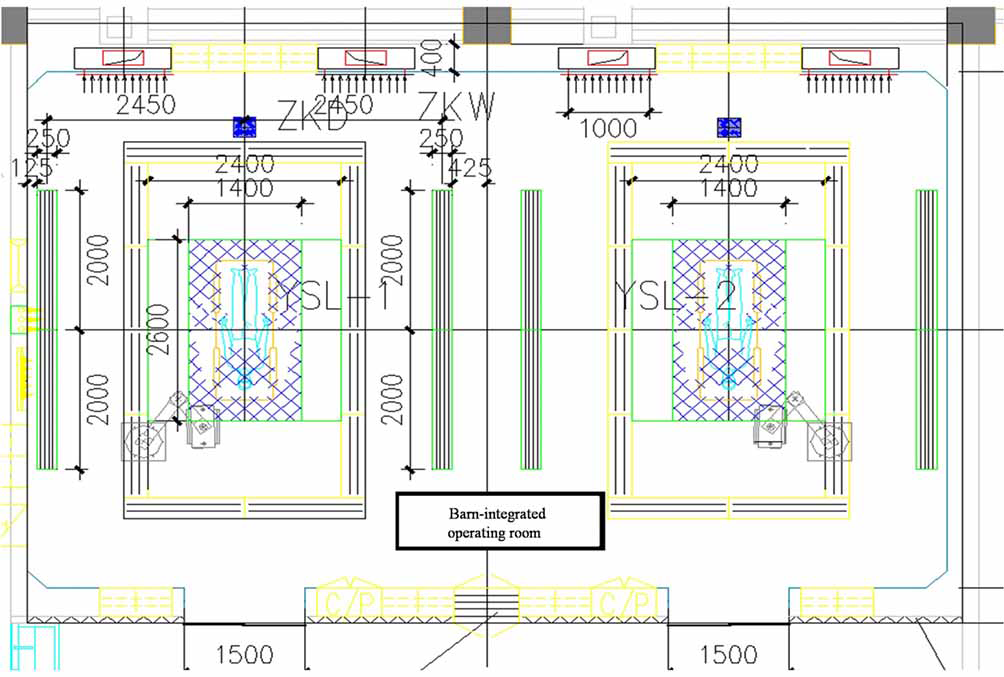 Figure 2 Schematic diagram of the canopy.

Numerical model of the velocity field

The velocity field of the model was simulated with CFD software Fluent16.0 (ANSYS Inc., Pennsylvania, USA). Grid dependency tests were carried out to ensure that the results were appropriate and would not vary when the grid density was increased. Grid-independency was achieved by refining the mesh size when the total number of the meshes reached 1.86×106. The human body and equipment were modeled as cuboids to ensure the simplicity of the model. Table 1 shows the configuration of the vents. All of the interior walls were seen as no slip, and the wall boundary conditions of personnel and equipment are shown in Table 2. All sensible heat energy released by surgical personnel and medical equipment was taken as 100% convective and was assumed to be uniform at the emitting surfaces; Chow et al. found that such simplification had little bearing on simulation results (6).

The standard k-ε model was employed to simulate airflow. SIMPLE algorithm was applied in the pressure-velocity coupling calculation. In the k-ε model, a second-order upwind difference scheme was used for discretization of the convection terms. Converged solutions were assumed when the summations of residuals were lower than 10-6 for energy equations and lower than 10-4 for other equations.

A Lagrangian-based discrete random walk (DRW) model was used to simulate the particle concentration field. In our simulation, bacteria-carrying particles (BCPs) were assumed to be 6 µm in diameter and have a material density of 1,000 kg/m3 (7). It was assumed that no bacteria was emitted from the patient. The bacteria emission from members of surgical staff membersis shown in Table 3. The particle boundary conditions were defined as “trap” for the body surface of the patient and the instrument table and surgical table surfaces, “escape” for inlets and outlets, and “reflect” for walls. All contaminant sources were assumed to be uniform at the emitting surfaces.

Airflow velocities were measured with a thermal anemometer (TSI Inc., Shoreview, MN), which is a unidirectional air velocity transducer with a range of 0.13–50 m/s and a reading accuracy of ±2%. The uniformity of the air velocity was checked by taking measurements at 15 cm underneath the plenums. Data were collected once per second. Figure 3 shows the locations of the air velocity collection points. 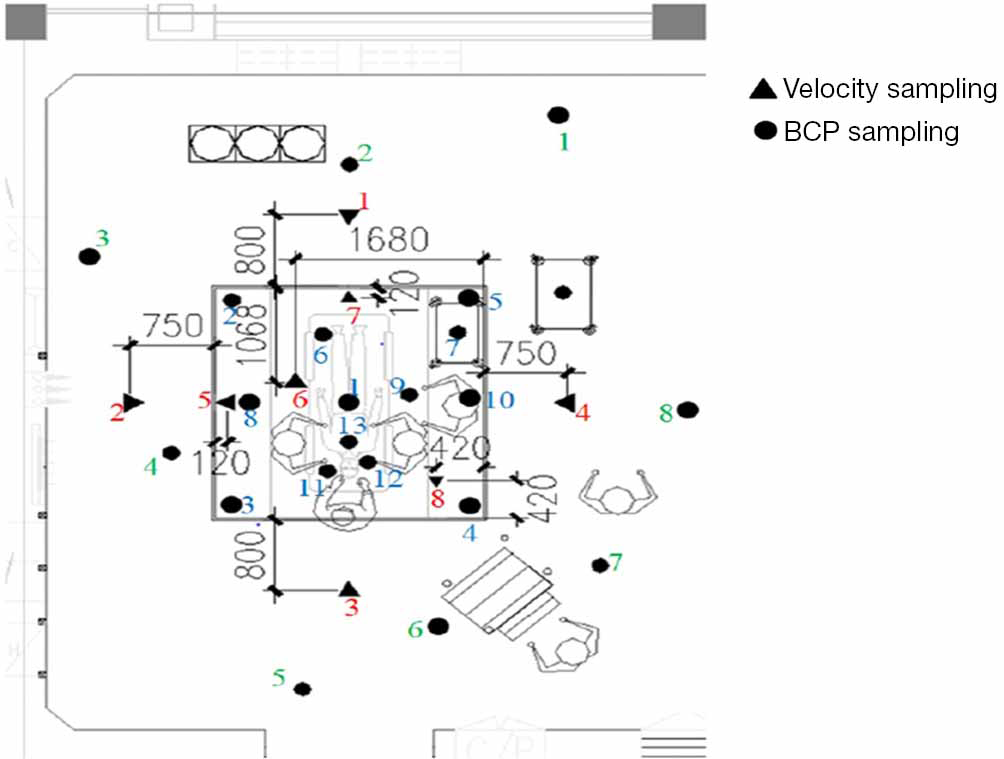 Field tests of particle counts and microbial counts were conducted during mock surgeries. Samples were taken from the positions shown in Figure 3. The deposition and distribution of BCPs in the operating room were estimated using the passive air sampling (PAS) and active air sampling (AAS) methods. For PAS, nutrient agar plates were exposed to the air for 0.5 h. BCPs were impacted onto the surface of the nutrient agar plates and then incubated for 24 h at 37 °C. For AAS, the air was sampled using a slit sampler working at 40 L/min for 8 min, and then directed toward the surface of nutrient agar plates, followed by incubation in 37 °C for 24 h. The number of colony forming units (CFU) was counted to establish the number of aerobic bacteria/m3 in the air.

Figure 4 displays the CFD predicted airflow pattern under the class I operating room setting. As shown in Figure 4A and B, the surgical lamps influenced the airflow above the operating table considerably, leading to turbulence underneath the surgical lamps. The flow velocity in the region below the medical lamps dropped, and the unidirectional airflow diminished locally, while the streamlines were basically parallel in the area away from the surgical light. As Figure 4C shows, there was a degree of air turbulence in the clean corridor; nonetheless, this occurrence had a negligible effect on the air flow in the critical surgical region, which remained relatively uniform due to the large volume of supply air. The air velocity at the centerline of the operating table decreased from 0.45 to 0.125 m/s above the waist of the patient, because of a thermal plume caused by heat dissipation from the surgical personnel and medical equipment. Nevertheless, the clean air from the main air supply device continued to exhibit a good washing effect in the vicinity of the patient's chest (the wound site). As shown in Figure 4D, upper return air velocity was large enough to form an air curtain between the two cabins, while no re-entrainment, which can cause clean air to become contaminated, occurred. Thus, the clean supply air to above the operating area was delivered directly and smoothly. Figure 4E shows the velocity field at the horizontal section of Z=1.2 m, which covered a large area of high-velocity above the surgical site, with the air velocity at its perimeter region approaching 0.35 m/s. A velocity separation zone was formed in the shared region between the two cabins, which was conducive to avoiding mutual interference between the two surgical areas. 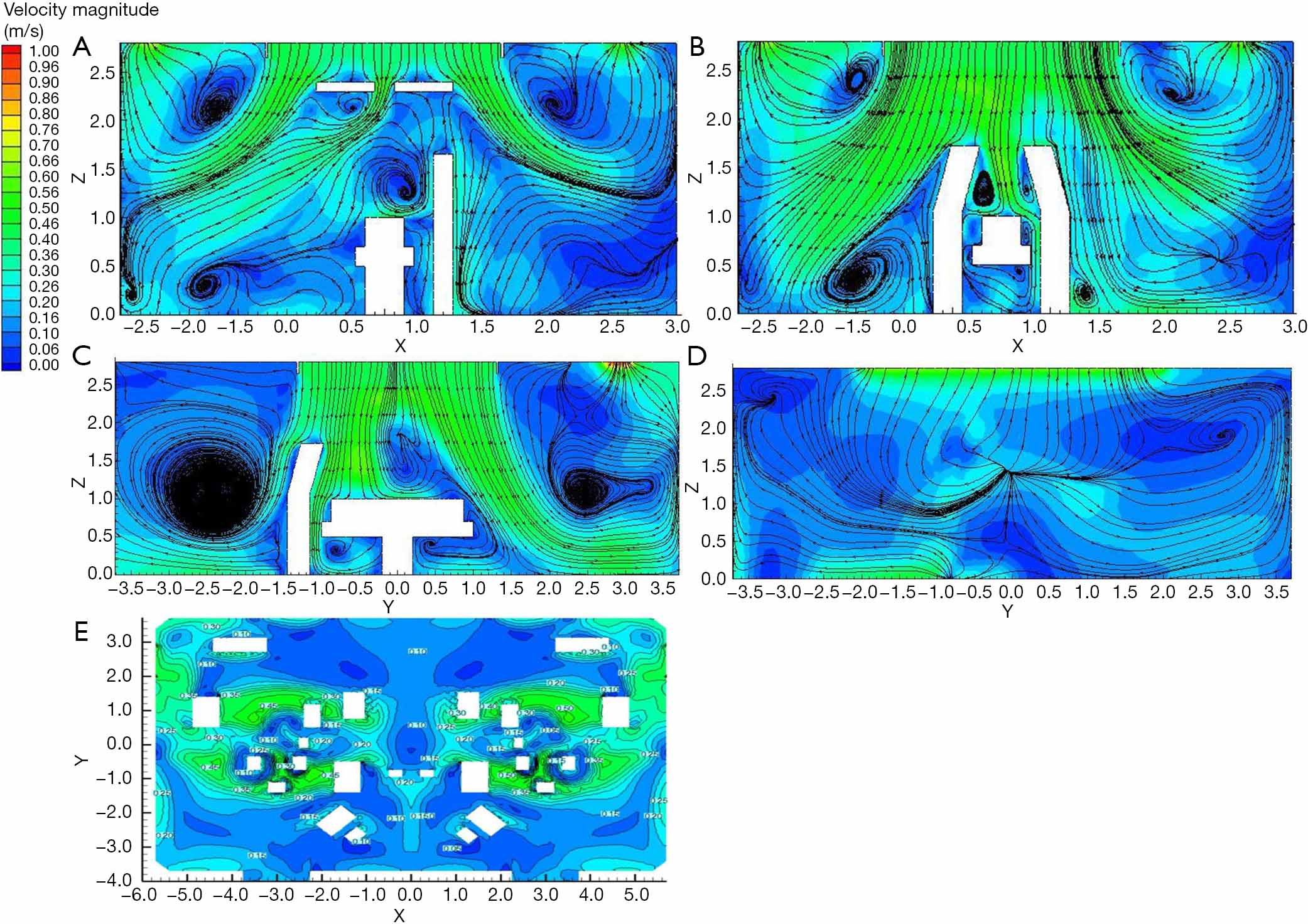 Figure 5 reflects the velocity distribution under a class III operating room setting. As shown in Figure 5A and B, a zone of low velocity beneath the surgical lamp and turbulence existed, while the airflow streamline in the area not obstructed by the operating lamp basically remained parallel, with the maximum flow rate approaching 0.4 m/s. Turbulence existed on the clean corridor side (Figure 5C). Due to the heat dissipation from the patient, the airflow above the patient decreased slightly, with the air velocity reaching the body surface of the patient at about 0.2 m/s. The air velocity in the surgical area was well above 0.2 m/s, which effectively prevented the interference of airflow from the adjacent area (Figure 5D). 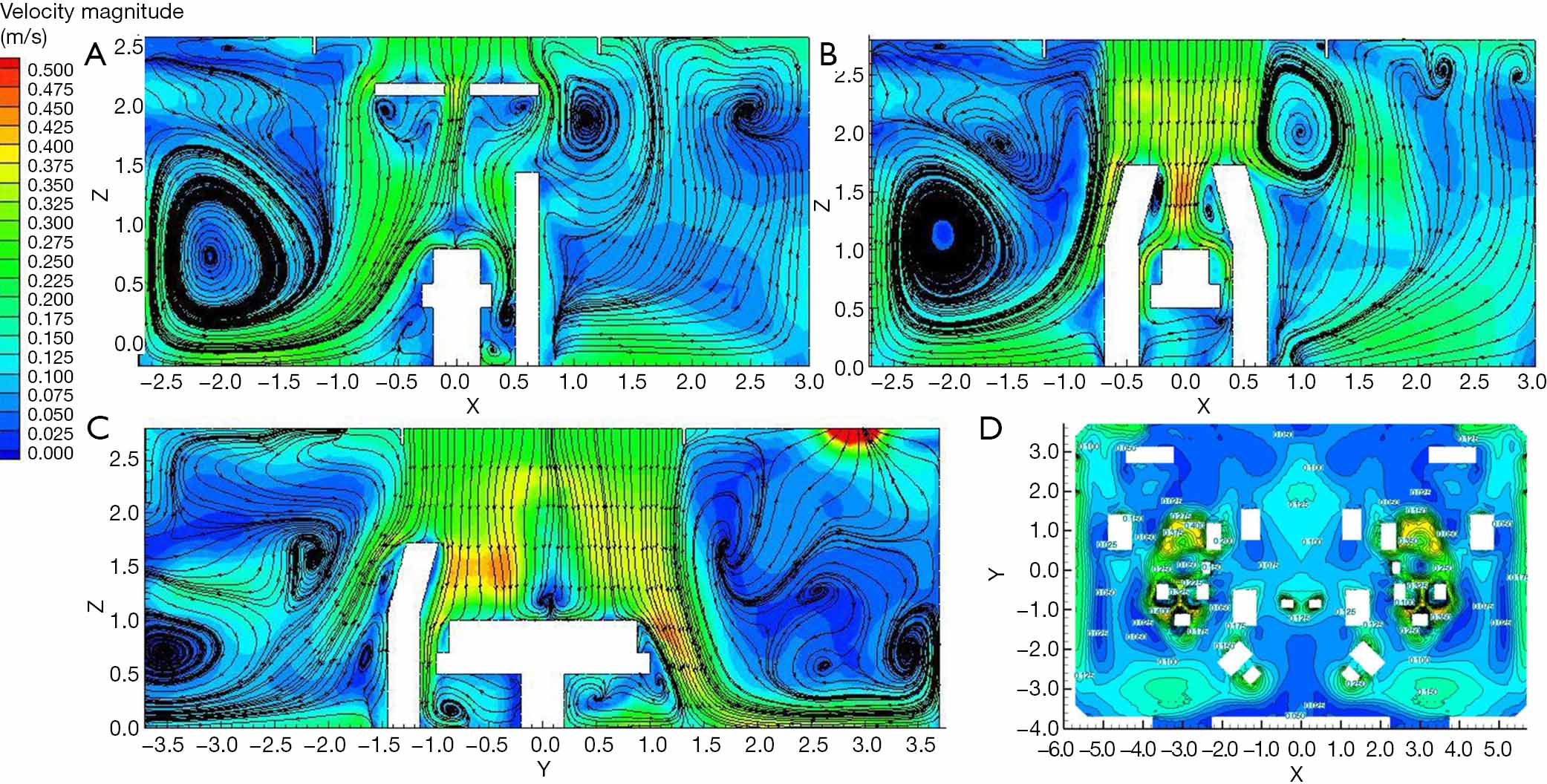 Figure 6 shows the particle concentration contours for different sections in a class I operating room. As shown by Figure 6A and B, a stagnant area with a high concentration of BCP developed underneath the surgical lamps, owing to its close vicinity to sources of contamination, such as the surgeons, and the obstruction of airflow by the surgical lamps. The BCP concentration at the waist of the patient reached 10 CFU/m3. However, at the chest of the patient, it was reduced to 5 CFU/m3, which indicated a fast decay rate of the pollutant particles. Despite the existence of a region with BCP concentration of 10–35 CFU/m3 caused by heat dissipation from medical personnel and the obstructive effect of the surgical lamps, the high pollutant concentration area was not in the vicinity of the patient’s body surface (Figure 6C). The concentration of infectious particles near the patient’s body surface was reduced to 5 CFU/m3, which met the specification of a class I operating room. Meanwhile, the particle concentration at the front side of the operating room was significantly higher than that at the back side, due to the lack of exhaust and return air outlets in the front, which generated turbulence in the clean corridor and led to particle retention (Figure 6D). The BCP concentration on the exhaust corridor side was much lower, as the polluted air was discharged smoothly. The concentration of pollutants near the medical personnel was high, since the skin squames emitted by the medical personnel were the main source of pollution (7). Nevertheless, the decay rate was high, and the concentration of infectious particles in the vicinity of the patient was reduced to 5 CFU/m3, which indicated an effective washing effect of the airflow. 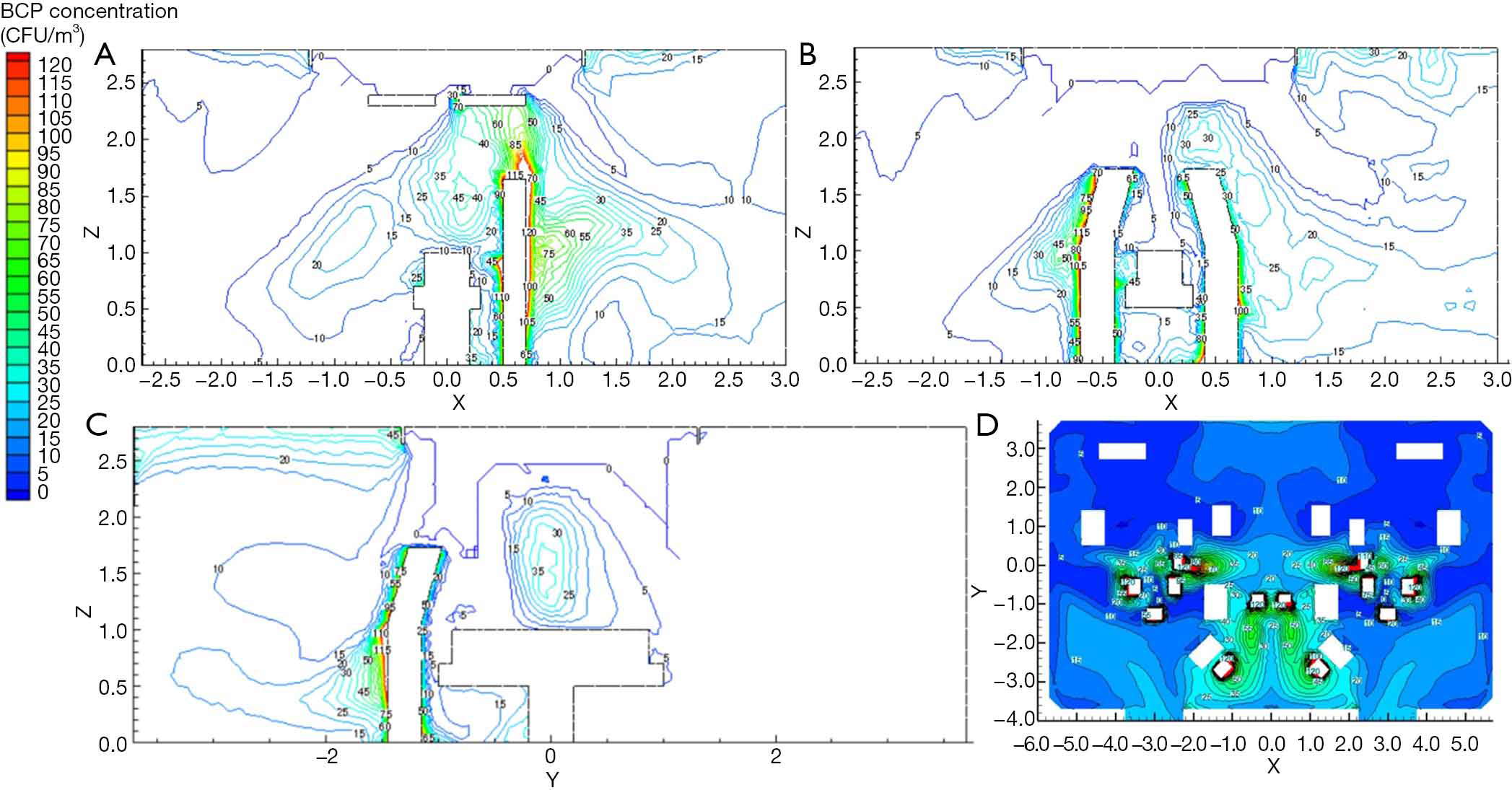 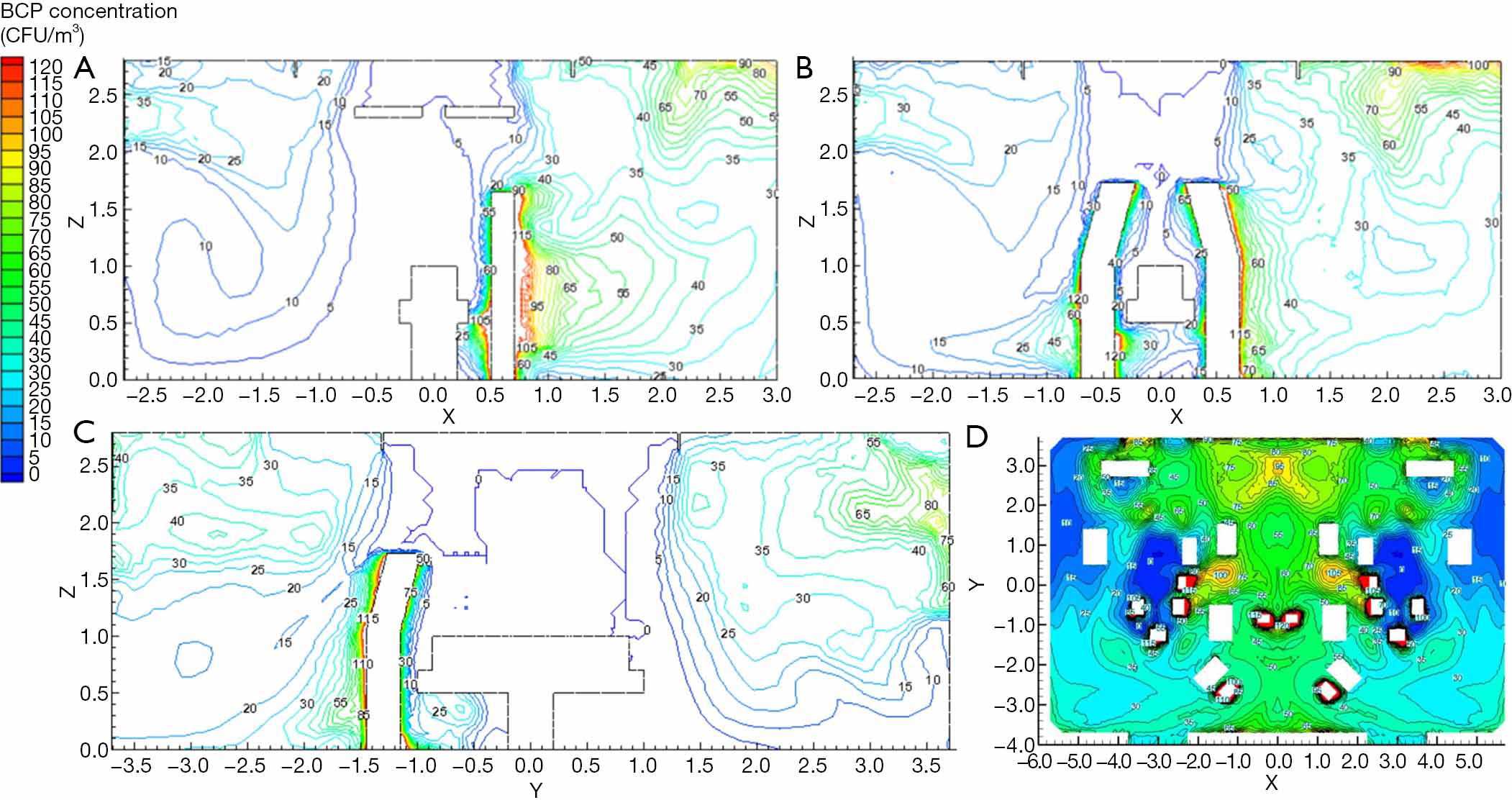 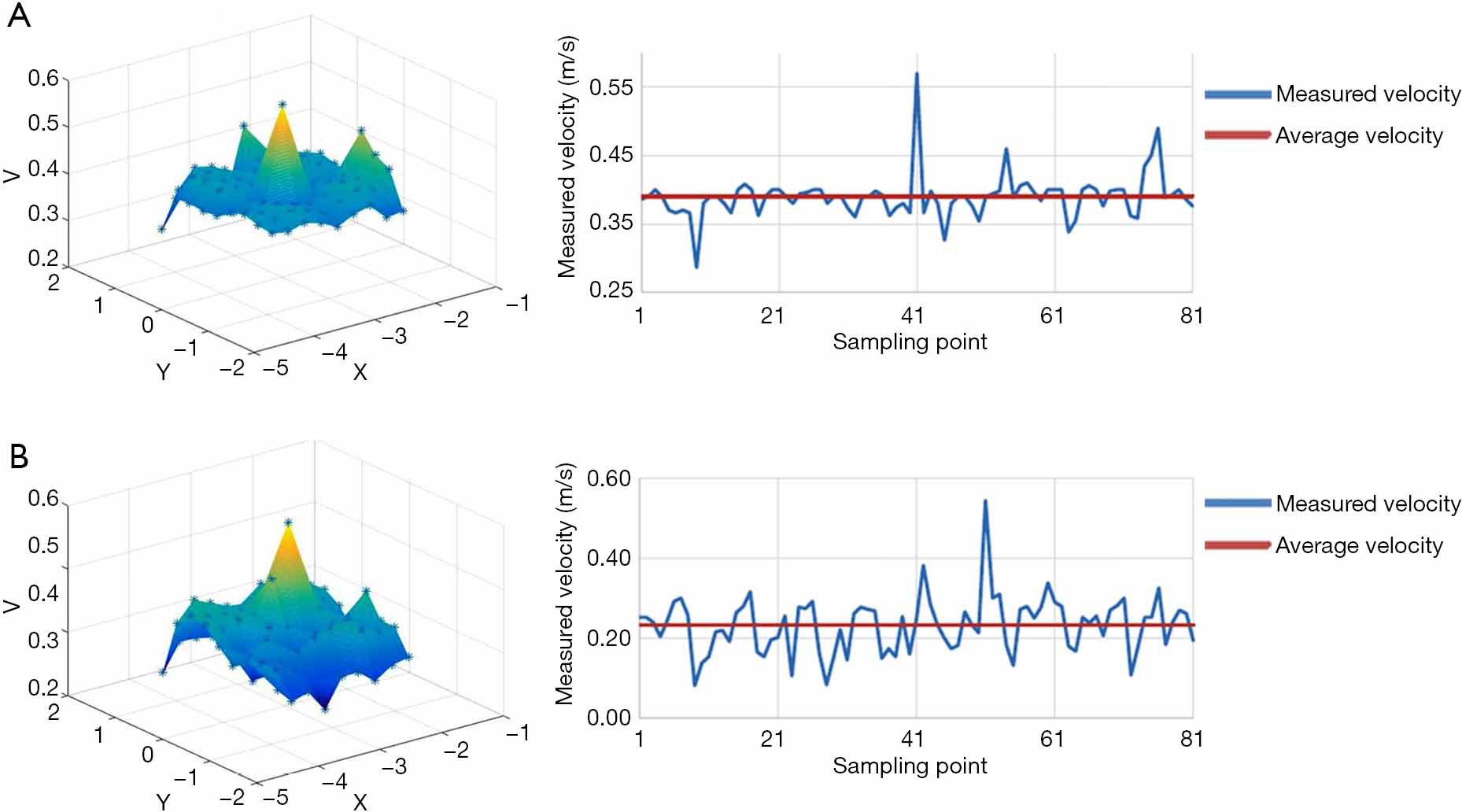 Figure 9 displays the measured airflow velocity of a class I operating room in a dynamic state. The mean measured air velocity at heights of 2.7 and 1.2 m was 0.39 and 0.232 m/s, respectively, which met the requirements of 0.20–0.25 m/s in the specification. 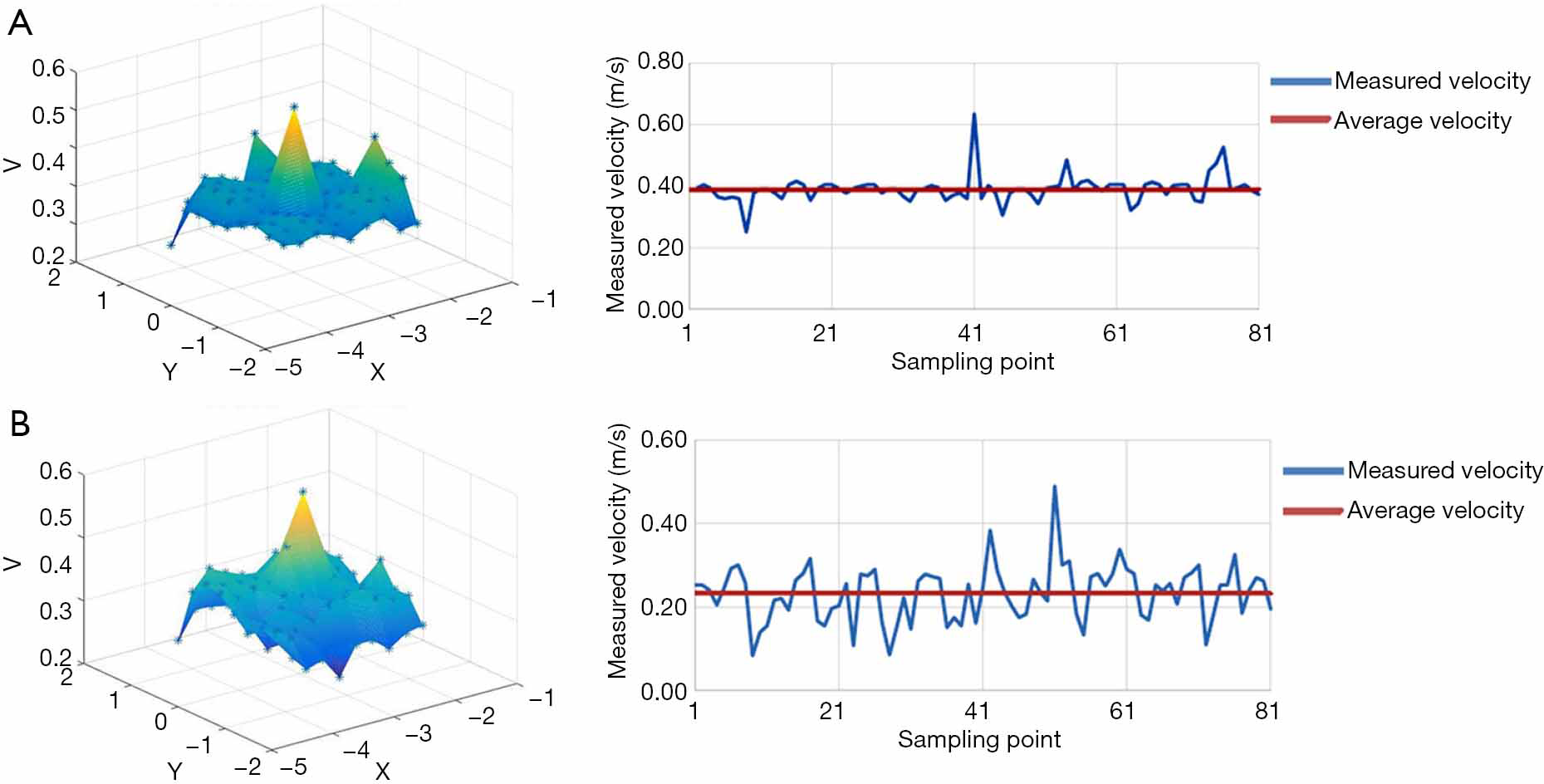 In situ assessment of BCP concentration

Table 4 shows the concentration of BCPs captured by the slit samplers or settled over the agar plates. Bacterial counts by AAS and PAS at the surgical site and surrounding area were extremely low and well within the current standard recommended in GB50333-2013 (8). The desired concentration of <10 CFU/m3 for infection-sensitive surgery was achieved.

Barn-integrated operating rooms enable several operations to be performed simultaneously. Moreover, they ensure optimum use of operating room capacity by facilitating the sharing of support services, and if necessary, they can provide sufficient space to accommodate the surgical team and larger items of mobile equipment. These benefits offer solutions for the ever-increasing demand for surgeries.

Importantly, the cleanliness level of the operating room could be adjusted flexibly depending on the particular surgery to be performed. For certain types of surgery during which the risks of airborne spread are low, such as minimally invasive surgery, the ventilation system would be set to class III. Meanwhile, for surgeries with high risk of airborne infection, like lung transplantation surgery, the ventilation system would be adjusted to class I. In this way, substantial amounts of energy and running costs would be saved, while the demands of infection control could be met.

One major limitation of the present study was that the airflow velocity and BCP concentration measurements did not include the presence of real surgical staff, which was mimicked by the presence of thermal dummies. Since the airflow velocity distribution and BCP concentration above the surgical bed would be influenced by the movement of surgeons and the thermal plume generated by them and the patient, these results should be carefully interpreted (9,10). Therefore, the infection rate cannot be predicted at this stage. Further investigation is needed to generate the most appropriate design of ventilation systems for the use of barn-integrated operating rooms in thoracic surgery.

Conflicts of Interest: All authors have completed the ICMJE uniform disclosure form (available at http://dx.doi.org/10.21037/atm-20-4349). The authors have no conflicts of interest to declare.