Artesunate induces apoptosis and inhibits the proliferation, stemness, and tumorigenesis of leukemia

Leukemia, which is characterized by tumors of the hematopoietic system, is one of the main malignancies endangering human health. Its incidence among all malignant tumors (liver cancer, stomach cancer, lung cancer, oesophagus cancer, rectum cancer, breast cancer, pancreas cancer, leukaemia, bran cancer and central nervous system cancer and colon cancer) ranks seventh in China (47 cases per 100,000) and sixth in Europe and America (64 cases per 100,000) (1). Chemotherapy and bone marrow transplantation are the main treatment methods for leukemia. Although they have a certain curative effect and prolong the survival of patients, due to the lack of specificity of chemotherapy drugs, they often cause severe side effects to patients, and some patients eventually develop drug-resistant recurrence (2). Therefore, more effective and less adverse therapeutic strategies need to be explored.

Artesunate (Art), a semi-synthetic derivative of artemisinin from Artemisia annual, is a first-line medicine for malaria (3). In the past decade, Art has been tested for its anticancer effects on various types of human malignancies including leukemia (4-6). For instance, Art has been found to induce the apoptosis of acute myeloid leukemia THP-1 cells, myelodysplastic syndrome SKM-1 cells, and HepG2 cells (7-9), and inhibit the cell proliferation of breast cancer cells (10). Leukemia stem cells possess self-renewal capacity and differentiation potential, which play a critical role in leukemia resistance, relapse, and prognosis (11). Stem cells can also confer a unlimited proliferative capacity to cancer cells (12). Art has been shown to kill several kinds of leukemia cells (6,7,13), suggesting its antileukemia effect. However, the mechanism underling this effect is poorly understood.

Therefore, this study aimed to clarify the antileukemia mechanism of Art in regards to the proliferation, stemness, and tumorigenesis of this malignancy. To this end, human acute promyelocyte leukemia HL-60 cells and acute myeloid leukemia KG1a cells were examined in vitro. Then, the expression of MEK/ERK and PI3K/Akt pathway proteins were determined in both Art-treated and non-Art-treated leukemia cells. Finally, a nude mice xenograft model was established in vivo to detect the effects of Art on tumor growth and stemness.

We present the following article in accordance with the ARRIVE reporting checklist (available at http://dx.doi.org/10.21037/atm-20-4558).

The proliferation capacity of HL-60 and KG1a cells was measured by colony formation assay. Then, 2×103 cells were cultured in six-well plates with 2 mL of RPMI 1640 medium containing 10% FBS at 37 °C for 10–14 days, until the colonies were visible to the naked eye. The cells were fixed with methanol and stained with 1% crystal violet for 15 minutes. Then, colony numbers were counted. All experiments were performed in triplicate.

First, 0.5×103 cells were seeded in Ultra-Low Attachment six-well plates (Corning, Corning, NY,USA) in the serum-free RPMI 1640 medium supplemented with 20 ng/mL EGF, 20 ng/mL bFGF, N-2 and, 2% B27 (Invitrogen, Carlsbad, CA, USA). After 14 days of culture, microscope images were acquired from the plate. The number and diameters of tumor spheres (diameter >30 µm) were counted from 4 to 6 images for each well. All results were reported relative to the negative control.

Each of the animal experiments in this study was conducted according to the principles of the NIH Guide for the Care and Use of Laboratory Animals and received approval from The First Affiliated Hospital of Zhengzhou University (No. 20190918). Five-week-old male athymic nude mice were purchased from the Model Animal Research Institute of Zhengzhou University. Approximately 1×107 KG1a cells were injected subcutaneously into the right flank of each nude mouse. The mice were randomly divided into the control and treatment group. The treatment group received 100 mg/kg Art i.p. three times a week for 3 weeks. The mice were humanely killed, and the tumors were photographed.

Immunohistochemistry for Ki67 and survivin was performed to detect tumor expression. Sections (2 µm) were deparaffinized and pretreated with citrate buffer using a heat-induced epitope retrieval protocol. Endogenous peroxidase was blocked with 20% hydrogen peroxide for 15 minutes at room temperature followed by incubation with anti-Ki67 and anti-survivin for 30 minutes respectively. A biotinylated goat anti-mouse immunoglobulin G secondary antibody (Dako, Denmark) was then applied for 30 minutes. Slides were incubated with peroxidase-conjugated streptavidin reagent (Dako, Denmark) and developed with 3,3’-diaminobenzidine for 5 minutes. The slides were counterstained and dehydrated.

The results are expressed as mean values ± standard deviation (SD) or standard error (SE). Statistical comparisons were analyzed by one-way analysis of variance (ANOVA) followed by the least significant difference (LSD) test. A significance level of <0.05 was used for all tests. SPSS-PASW statics software version 18.0 (SPSS Inc., Chicago, IL, USA) was used for all the statistical analyses.

To determine the influence of Art on the apoptosis of leukemia cells, HL-60 and KG1a cells were treated with 0, 10, 25, and 50 µM of Art, and flow cytometry assay was performed. As shown in Figure 1A, 10, 25, and 50 µM Art stimulated cell apoptosis in a dose-dependent manner. To confirm the enhanced apoptosis, Western blotting was conducted. As depicted in Figure 1B,C,D, the protein level of cleaved caspase3 and the ratio of Bax/Bcl-2 were significantly up-regulated by Art in a dose-dependent manner (P<0.05). 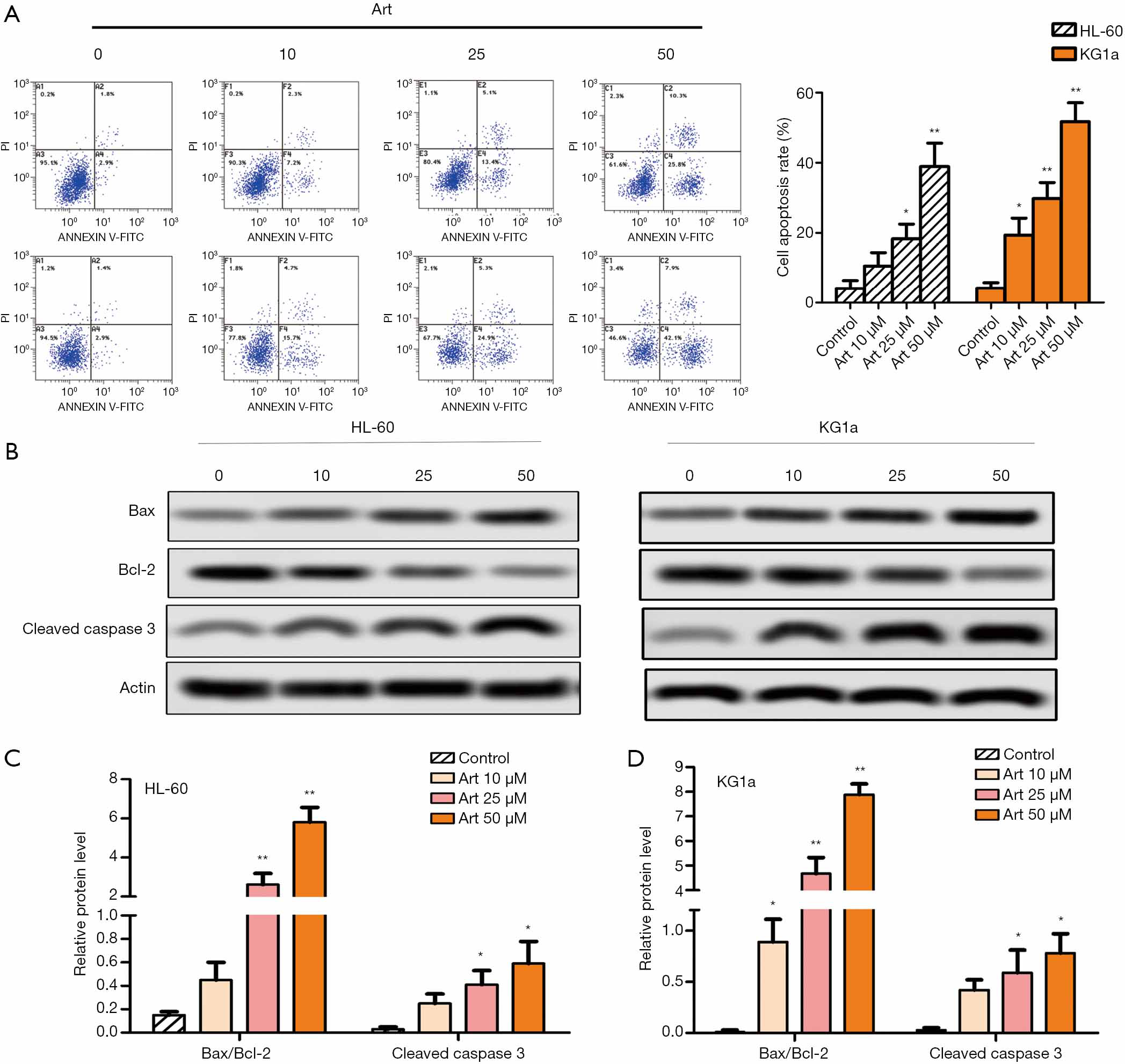 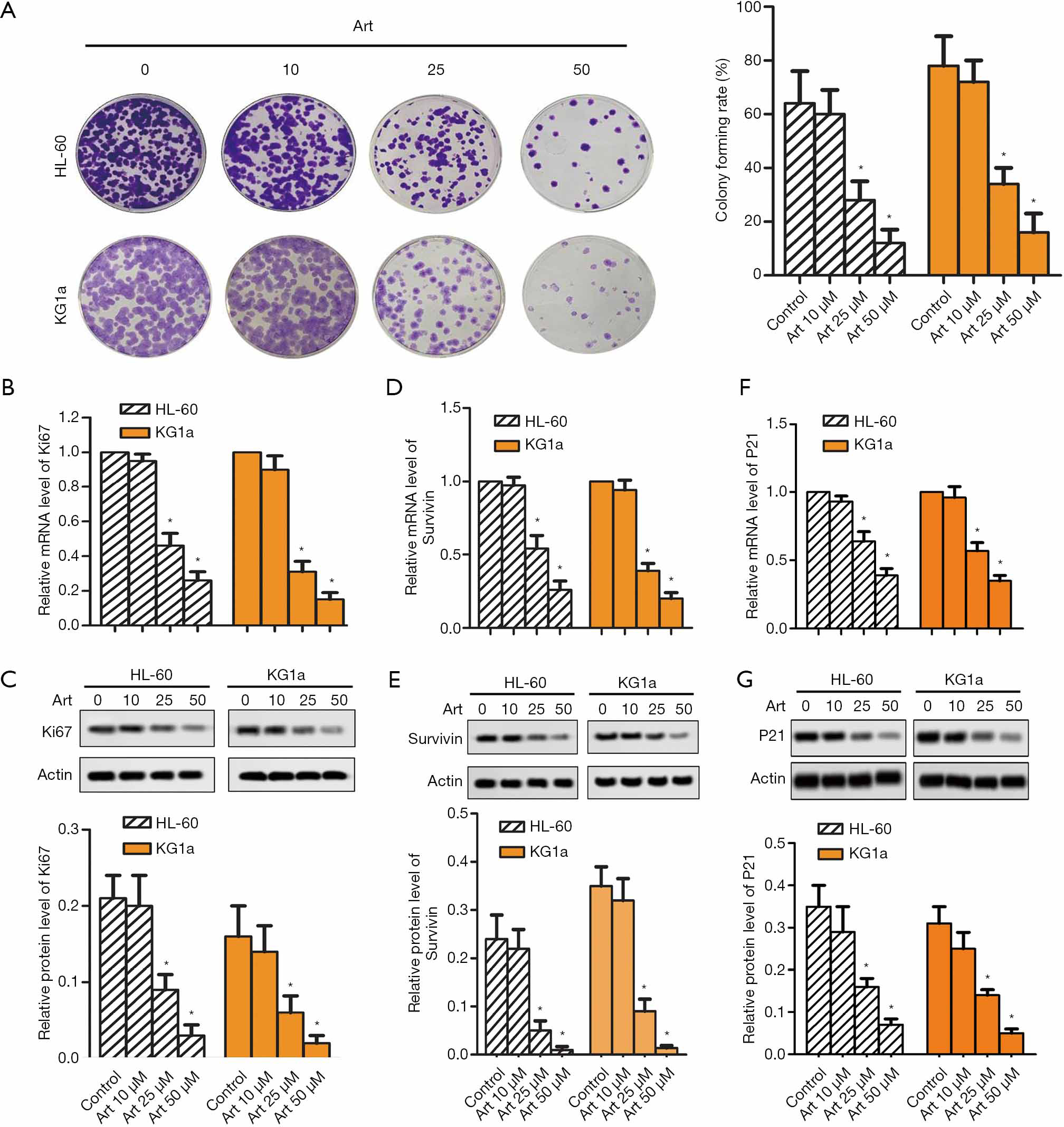 To determine the role of Art on stemness of HL-60 and KG1a cells, cell sphere formation assay was performed, and the result was observed under a phase contrast microscope. As shown in Figure 3A, 10, 25, and 50 µM of Art suppressed the cell sphere formation ability in a dose-dependent manner as evidenced by the reduced diameters of the spheres (Figure 3B) and sphere numbers (Figure 3C). Detection of expression of stemness marker proteins was then performed. The expressions of CD44, SOX2, ALDH1 and OCT4 were all inhibited by Art in a dose-dependent manner (Figure 3D,E,F, P<0.05). These results indicated that Art significantly reduced stemness of HL-60 and KG1a leukemia cells. 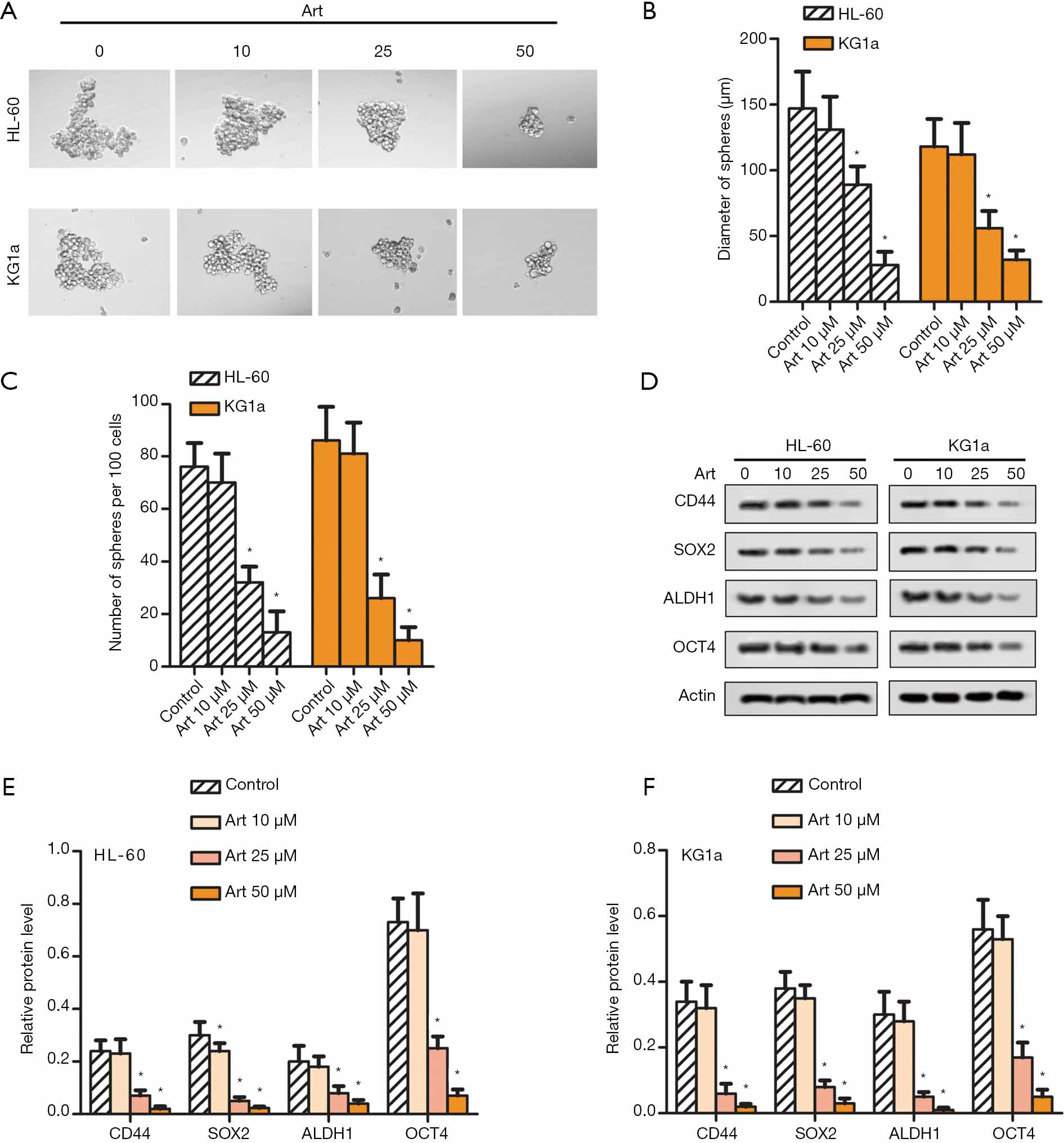 Figure 3 Art suppressed stemness of leukemia cells.(A) Cell stemness of HL-60 and KG1a cells was analyzed by sphere formation assay (magnification, ×100). (B) The diameters of the spheres were quantified. (C) The number of spheres was counted. (D) The expressions of proteins CD44, SOX2, ALDH1 and OCT4 were determined by Western blot in both HL-60 and KG1a cells. (E-F) The representative column diagrams show results of relative protein expressions in both HL-60 and KG1a cells. *, P<0.05, compared with Art 0 µM group. Data are mean ± SD for the result of three replicates. 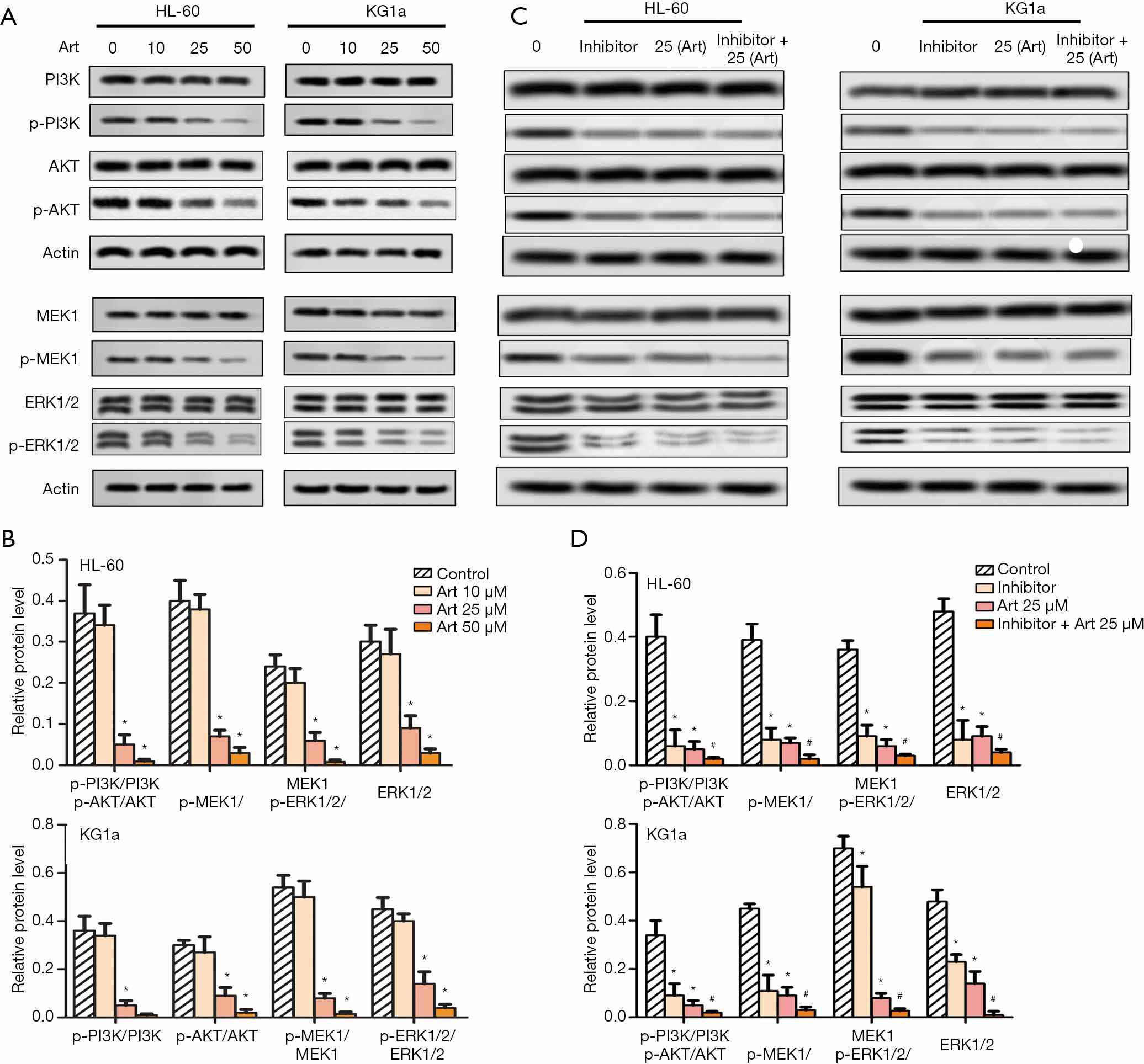 KG1a xenograft mouse models were established to confirm the anticancer role of Art in vivo. Some mice were treated with Art and some were not (100 mg/kg). Tumor size (Figure 5A) and tumor weight (Figure 5B) were significantly decreased by Art. Immunohistochemistry analysis (Figure 5C,D) showed that Art significantly reduced the expression of Ki67 and survivin, indicating that cell proliferation was restricted. Art also impeded the cell sphere formation ability as evidenced by reduced diameters of spheres and sphere numbers (Figure 5E,F) in vivo. These results suggest that Art inhibited growth and stemness in KG1a xenograft models. 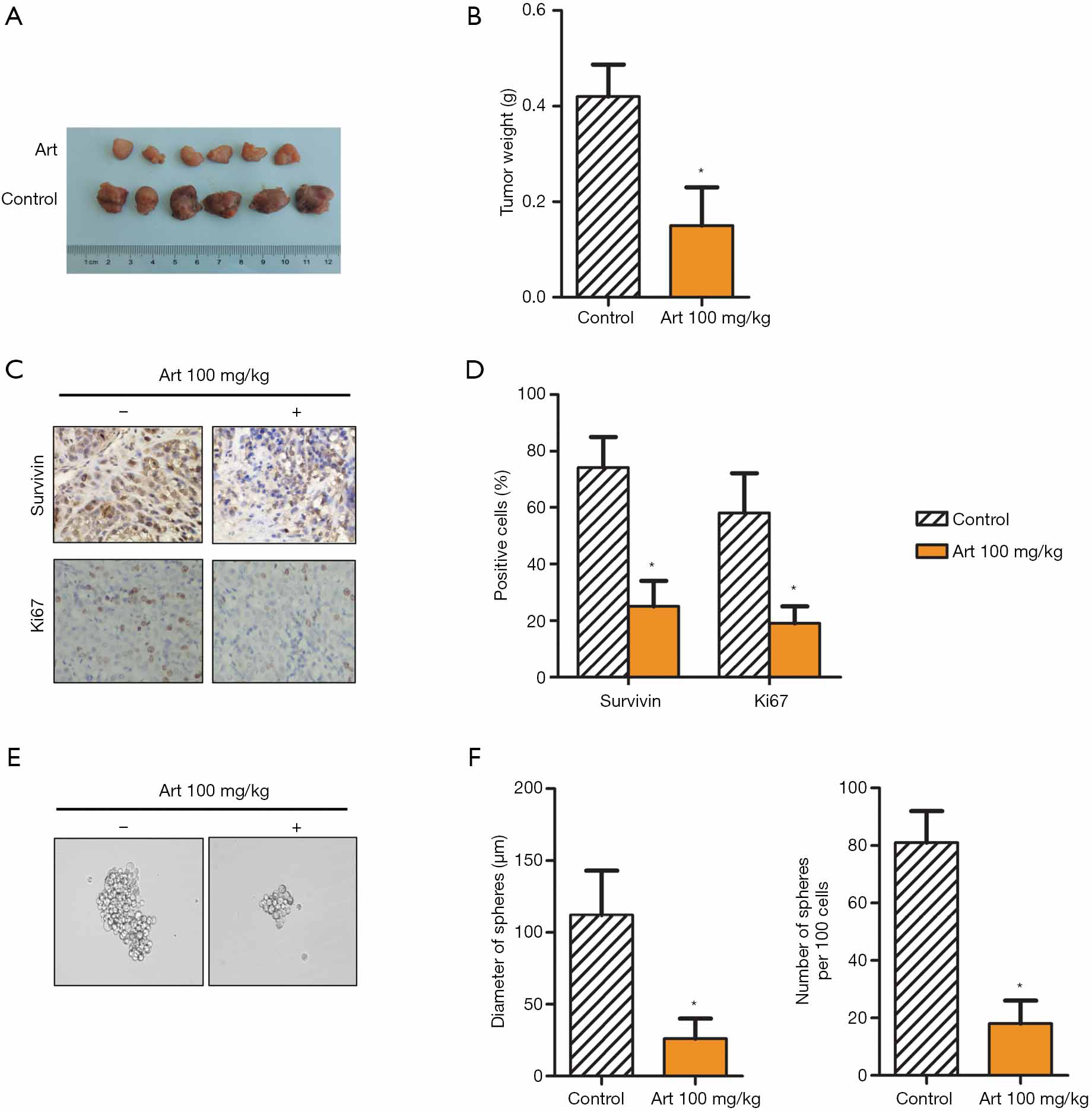 Figure 5 Art inhibited growth and stemness in KG1a xenograft models. (A) Some nude mice bearing subcutaneous xenograft leukemia were treated with100 mg/kg Art and some were not. (B) The representative column diagram shows tumor weight. (C) Immunohistochemistry analysis of expression of Ki67 and survivin (magnification, ×200). (D) The representative column diagram shows the results of positive cells (brown). (E) Cell stemness of KG1a cells was analyzed by sphere formation assay (magnification, ×100). (F) The diameters of spheres were quantified. *, P<0.05, compared with control. Data are mean ± SD for the results from three replicates.

Due to advances in chemotherapy regimens and supportive therapy, the application of hematopoietic stem cell transplantation, and a greater understanding of its pathogenesis, the prognosis of leukemia has improved (14). However, many obstacles, such as multi-drug chemoresistance, high cost, severe side effects, and limited bone marrow bank resources, have greatly restricted the treatment of leukemia in modern medicine (15). Therefore, there has been an intensification of research into developing effective and low toxic anti-tumor cell agents from natural drugs.

Pharmacological studies have confirmed that artemisinin and its derivatives not only have antimalaria and antitumor effects but can also inhibit the proliferation of white blood cells (16). Pharmacokinetic studies have proven that artemisinin can be absorbed quickly, distributed widely, and excreted quickly from the body (17), while toxicological studies have confirmed that its side effects are mild (18). Interestingly, the main target organ of artemisinin toxicity is bone marrow (19). Artemisinin can inhibit bone marrow hematopoiesis and has a strong targeting effect on leukemia cells, which is one of the characteristics of antileukemia drugs. Art, as a derivative of artemisinin, has long been used clinically as an antimalarial drug (20). In vivo and in vitro experiments have shown that Art can selectively kill tumor cells and reverse the multidrug resistance of tumor cells, without cross-resistance to traditional chemotherapy drugs (21). Therefore, Art may serve as a new type of antileukemia drug in clinical application. Many researchers have studied the antitumor effect and mechanism of Art, and the main anti-tumor mechanisms primarily involve proliferation inhibition and apoptosis promotion.

Survivin is expressed in most human tumors, and can inhibit key members of the caspase protease family (such as caspase-3 and -7) and exert an apoptosis-inhibiting effect. P21, the first CKI gene found, mainly acts by modulating the activity of CDK. P21 blocks the activity of all cyclin-CDK complexes, such as cyclin E-CDK2, cyclin D-CDK4, and cyclin A-CDK2 (22). Overactivation of the P21 gene can result in cell cycle disorders and block cell proliferation (23). Previous studies have shown that, in conjunction with surviving, p21 and p27 may also inhibit cell apoptosis (24,25). Results of this study suggest that Art enhances tumor cells apoptosis and inhibits cell proliferation.

Cancer stem cells, which are defined by self-renewal, differentiation potential and tumorigenicity, are proposed to be responsible for cancer initiation and maintain the tumor mass. Typically, growth factors are known to stimulate MEK/ERK pathways, which is responsible for mitogenic activity, while the PI3K appears more related with the maintenance of stemness (31). The ING family of epigenetic regulators (ING5) also enhances PI3K/AKT and MEK/ERK activity to sustain self-renewal of Stem cell-like brain tumor initiating cells (BTICs) over serial passage of stem cell-like spheres (32). CD44 is an important oral cancer stem cell marker, CD44v4 expression is more linked with ERK1/2 activation and promote cisplatin resistance, whereas CD44v6 expression is associated primarily with PI3K/Akt/GSK3β activation and driving tumor invasion/migration (33). Bufalin inhibited the activation of MEK/ERK and PI3K/AKT signaling pathways by inhibiting the expression of p-c-Met, thus inhibiting proliferation of GBC-SD cells and reducing the self-renewal ability of gallbladder cancer stem cells (34). Activation of PI3K/Akt and MEK/ERK signaling pathways has been proven to promote stemness of cancer cells (35,36). Consistent with the previous studies, Art inhibited stemness of leukemia cells, and interestingly, this mechanism might be regulated by PI3K/Akt and MEK/ERK signaling pathways.

In conclusion, this study showed that Art inhibited proliferation and stemness of leukemia cells in vitro and in vivo, and promoted their apoptosis. The mechanism of Art regulation of cell apoptosis, proliferation, and stemness consist of the modulation of PI3K/Akt and MEK/ERK signaling pathways.

Reporting Checklist: The authors have completed the ARRIVE reporting checklist. Available at http://dx.doi.org/10.21037/atm-20-4558

Conflicts of Interest: All authors have completed the ICMJE uniform disclosure form (available at http://dx.doi.org/10.21037/atm-20-4558). The authors have no conflicts of interest to declare.

Ethical Statement: The authors are accountable for all aspects of the work in ensuring that questions related to the accuracy or integrity of any part of the work are appropriately investigated and resolved. Each of the animal experiments in this study was conducted according to the principles of the NIH Guide for the Care and Use of Laboratory Animals and received approval from The First Affiliated Hospital of Zhengzhou University (No. 20190918).