Paraquat (1,1'-dimethyl 4,4'-bipyridine dichloride; PQ) is a quick-acting and non-selective herbicide that is widely used in agricultural production (1). It is highly toxic to humans and livestock, and acute poisoning caused by accidental or self-exposure to PQ has become a frequent cause of pesticide poisoning death (2). Despite many therapeutic methods being able to achieve some clinical effects, in the absence of a specific antidote, PQ poisoning has a mortality rate exceeding 90%, and the vast majority of surviving patients develop pulmonary interstitial fibrosis and have a poor prognosis (3). Previous studies have found that after entering the lung through energy-dependent polyamine intake, PQ accumulates and carries out an oxidation-reduction reaction, thus inducing the generation of a large number of reactive oxygen species (ROS) (4). Then, through lipid peroxidation, the relative balance between internal oxidation and antioxidant reaction is destroyed (5). Meanwhile, lung damage causes various inflammatory cells to accumulate and induces the secretion of tumor necrosis factor-α (TNF-α), interleukin-6 (IL-6), and other inflammatory factors. This sees an uncontrolled inflammatory response in the lung, leading to the aggravation of lipid peroxidation, inflammatory cell infiltration, and alveolar epithelial cell apoptosis. The subsequent pulmonary hemorrhage and destruction of alveolar epithelial cells, eventually cause acute lung injury (6-8). Many therapeutic strategies have been devised for the pathogenesis of PQ poisoning; however, their clinical efficacy has been unsatisfactory.

Polydatin, which is also known as resveratrol glycoside (resveratrol-3-O-beta-mono-D-glucoside; PD), is an active ingredient derived from the root of Polygonum cuspidatum (9,10). Previous reports have shown that resveratrol can play a vital role in preventing and treating hepatic fibrosis (11). Other studies confirmed that it demonstrated powerful antioxidant properties in different hepatitis models, thus reducing liver fibrosis (12,13). Compared with resveratrol, PD has higher water solubility and resistance to enzyme oxidation (14). Also, unlike resveratrol, which passively penetrates cells, PD enters cells through active mechanisms using glucose carriers (15). These characteristics mean that PD is more bioavailable than resveratrol. PD has been shown to play a biological role in oxidation and inflammation through the inhibition of ROS production and inflammatory injury (16,17). Recent reports have shown that PD has a protective effect on CCl4-induced liver injury in mice (18). The mechanism underlying PQ poisoning bears much similarity to the pathological characteristics exhibited during disease development in a hepatitis model (19). Therefore, we speculate that PD also has a protective effect on the disease. However, the effect of PQ in protecting human embryonic lung fibroblasts from damage has not been elucidated. In the current study, we aimed to examine the effect of PD on human embryonic lung fibroblasts induced by PQ poisoning to provide new ideas for the clinical treatment of patients with PQ poisoning.

We present the following article in accordance with the ARRVIE reporting checklist (available at http://dx.doi.org/10.21037/atm-20-4570).

Detection of apoptosis by flow cytometry

Cell suspension was transferred from the cell culture plate (5×105 cells) to a clean centrifuge tube. Then, 1.25 µL Annexin V-FITC and propidium iodide (PI, Sigma, Beijing, China) was added. The cells were kept in the dark for 15 min, and then centrifuged at 1,000 ×g for 5 min to remove the supernatant. The cells were gently resuspended with 0.5 mL of precooled 1× binding buffer, and 10 µL propidiumiode was added. The sample was placed on ice and kept away from light. The stained cells were analyzed by flow cytometry (FAC Scan). The results were analyzed with Cell Quest software.

The levels of GSH-Px, SOD and MDA were determined according to the GSH-PX kit, SOD detection kit and MDA detection kit. (Beyotime, Shanghai, China).

Total protein (Sigma, Beijing, China) was extracted from the cell line using RIPA lysate according to the manufacturer's instructions. To minimize protein degradation, each step was carried out on ice. The total protein was heated to 100 °C and incubated for 5 min. Then, SDS-polyacrylamide gel electrophoresis (120 V, 100 min) was used. The isolated protein was then transferred to a polyvinylidene fluoride (PVDF) membrane (300 mA, 80 min). After the transfer, the target band was sealed with 5% tris-buffered saline (TBS), and the membrane was incubated with anti-rabbit polyclonal antibody NLRP3 (ab214185, Abcam), rabbit monoclonal antibody caspase-1 (ab207802, Abcam), rabbit monoclonal antibody ASC (ab155970, Abcam), and rabbit polyclonal antibody GAPDH (ab9485, Abcam) at 4 °C overnight with a dilution of 1:1,000. After 48 hours of incubation, the polyclonal Goat anti rabbit IgG (Catalog No. ab6721) secondary antibody (1:10,000) coupled with horseradish peroxidase (HRP) was taken out, washed 3 times, and then placed at room temperature for 1 hour, then washed several times. The film had an enhanced chemiluminescence system and was imaged with X-ray film. The image was then quantized with Image J software (National Institutes of Health).

All data were expressed as mean ± standard deviation (SD) and analyzed with SPSS Statistics 20.0 (IBM, USA). A t-test was used to compare between the two groups; multiple comparisons between groups used one-way analysis of variance (ANOVA). A P value of <0.05 was considered to be statistically significant.

The activity of MRC-5 cells was measured by MTT assay after treatment with PQ at different doses (12.5, 25, 50, 100, 200, and 400 µmol/L) for 24 h. The results of the MTT assay showed that compared with the 0 µmol/L group, the activity and survival rate of MRC-5 cells in the 12.5, 25, 50, 100, 200, and 400 µmol/L groups were both decreased significantly (P<0.05) in a dose-dependent manner. The higher the PQ concentration, the lower the activity and survival rate of the cells. Among the groups, the cell activity of the cells treated with 100 µmol/L PQ decreased by 47%, which was consistent with the model concentration of induced cytotoxicity; therefore, the subsequent experiments were performed using this dose (Figure 1A).

PD slowed down the PQ-induced apoptosis of MRC-5 cells 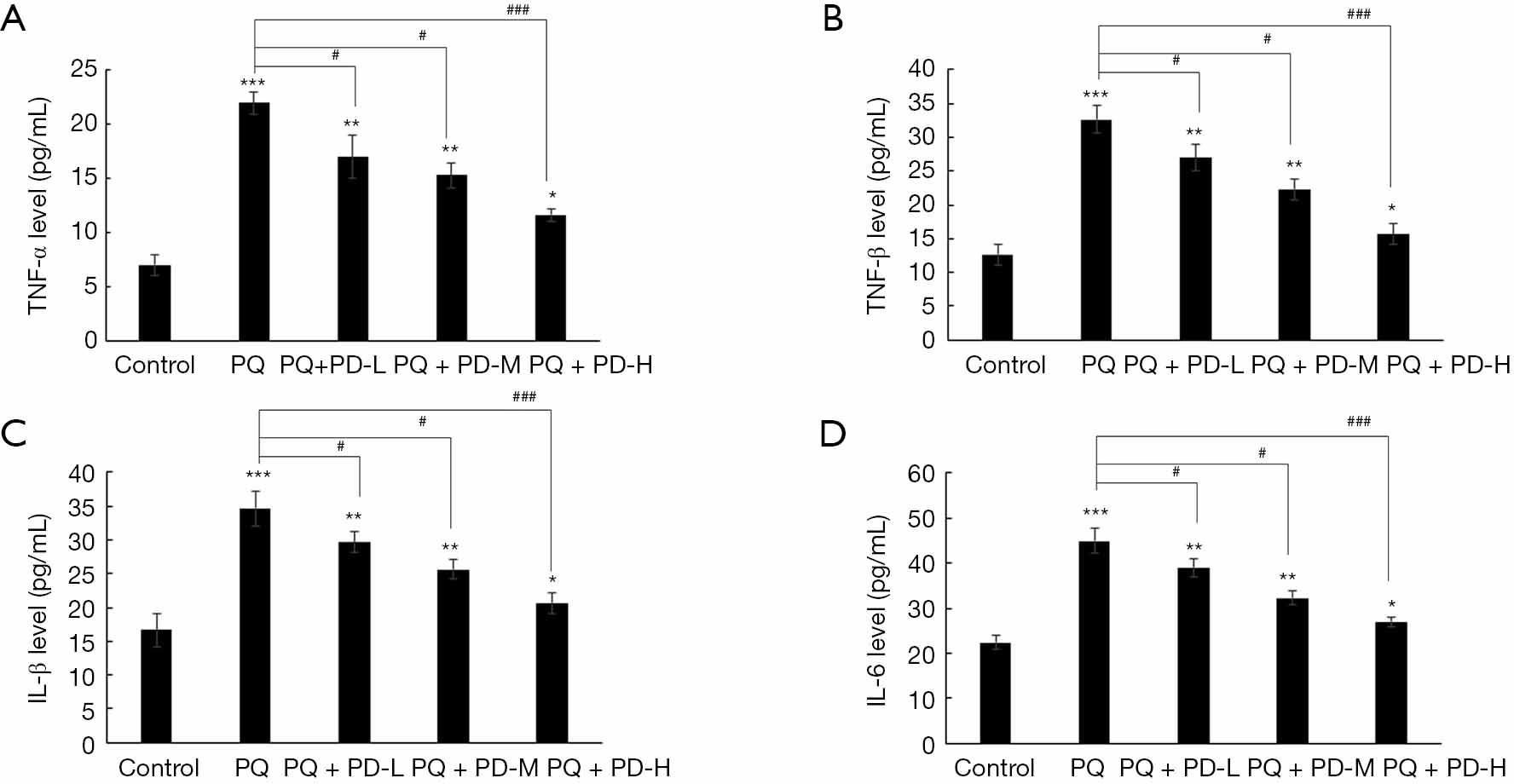 Previous studies have shown that PQ enters the esophagus, before being actively transported into the lung by alveolar type II cells, making the lung the main organ affected by PQ poisoning (20,21). PQ poisoning causes ALI and acute respiratory distress syndrome, and ultimately leads to respiratory failure, which is the major cause of PQ-associated death (22). After PQ has invaded the body, it destroys the balance of oxidation and antioxidation. Firstly, it produces a large number of superoxide radicals (H2O2, O2−, -OH) (23), induces the accumulation of lipid peroxidation (24), generates peroxidation products, MDA and other substances and destroys the cell membrane, endoplasmic reticulum, mitochondria, and other parts of the cell. Secondly, it reduces the activity of reductases, such as SOD (25,26). The inflammatory response in the lung is exacerbated by the accumulation of positive cells such as neutrophils and the activation of the NLRP3 inflammasome, and finally leads to apoptosis of lung cells, fibrosis, a sharp reduction in energy synthesis, and the inability of surfactant production, which results in further deterioration of the PQ-induced lung injury (27,28).

The normal level of oxidative stress mainly refers to the state of relative balance of oxides and antioxidants in the body (29). A large number of studies on PQ poisoning have confirmed that GSH PX is an important peroxidase that widely exists in the body, the activity of which can reflect the body’s antioxidant capacity (30). MDA is one of the lipid peroxides produced by the peroxidation of polyunsaturated fatty acids and is a reliable index for reflecting the metabolism of ROS in vivo and the degree of free radical attack on tissues (31). Its level is greatly elevated after PQ exposure, which can indirectly reflect the degree of PQ-induced lung injury (32). SOD is a marker of the body's secondary antioxidant system, which has the functions of scavenging free radicals and anti-lipid peroxidation. The reduction of its activity reflects the decrease in the antioxidant defense ability of the body (33). Our study shows that the MDA level in the supernatant of PQ-induced MRC-5 cells was significantly higher than that in the supernatant of the normal control group, while the levels of GSH PX and SOD were significantly lower. The results showed that PQ caused an obvious oxidative stress response in cells in lung tissue, produced superoxide free radicals, and led to lipid peroxidation, which caused MDA to attack the biofilm and destroyed the antioxidant defense ability; these findings are consistent with the existing reports (34). At present, the pharmacological study of PD has been confirmed, and its pharmacological antioxidant effect has been confirmed. In this study, compared with the PD induced group, the MDA level in the cell supernatant of PD intervention group was significantly decreased, while the levels of GSH PX and SOD were significantly increased, suggesting that PD has a certain regulatory effect on the oxidative stress response induced by PQ poisoning in human lung fibroblasts and reduces the production of ROS and other superoxide free radicals.

In the mechanism of acute lung injury, the inflammatory response mediated by lung tissue injury has attracted an increasing amount of attention. There is large bank of evidence that shows that PQ can mediate the production of excessive interleukin and TNF-α by inflammatory cells, which is closely related to the level of inflammation in lung tissue (35). TNF-α has been confirmed to be the promoter of the cytokine regulatory network in vivo. An increase in TNF-α triggers inflammatory response further, which is called an early inflammatory response cytokine (36). IL-6 has a wide range of biological functions. In the inflammatory stage, it mediates the inflammatory response through regulating the activity of helper lymphocytes, chemotactic granulocytes, macrophages and lymphocyte accumulation, which leads to the increase of IL-6 level (37). In the process of PQ-induced acute lung injury, the NLRP3 inflammasome is activated, which results in an increase in the level of inflammatory apoptosis genes, thus aggravating the inflammatory response and generating a vicious cycle (38,39). In this study, the levels of TNF-α, TGF-β, IL-1β, and IL-6 in MRC-5 cell supernatants in the PQ induction group were higher than those in the control group, and the levels of NLRP3, caspase-1, and ASC activated by NLRP3 inflammatory corpuscles were significantly increased. This was the direct cause of the increase of the lung wet-to-dry ratio, which results in cell fibrosis, increased lung permeability, and pulmonary edema and hyaline membrane formation. Eventually, this leads to uncontrolled inflammatory response in the lung and is closely related to the occurrence of ALI (40). After PD intervention, TNF-α, TGF-β, IL-1β, and IL-6 levels in the supernatant of MRC-5 cells were significantly lower than those in PQ group, and the levels of NLRP3, caspase-1, and ASC were significantly lower. It is suggested that PD plays an anti-inflammatory and anti-apoptosis role in PQ-induced MRC-5 damage.

In conclusion, oxidative stress and inflammatory factors (including TNF-α, TGF-β, IL-1β, and IL-6, and proteins related to NLRP3 inflammasome activation-including NLRP3, caspase-1, and ASC) are all involved in the process of PQ-induced MRC-5 cell injury. PD intervention inhibited oxidative stress, significantly reduced the levels of inflammatory factors, and inhibited the activation of the NLRP3 inflammasome. However, since this study was conducted on MRC-5 cells in vitro, the effect of PD on PQ-induced lung injury needs to be further verified in an animal model, which is worth further study.

Reporting Checklist: The authors have completed the MDAR reporting checklist. Available at http://dx.doi.org/10.21037/atm-20-4570

Conflicts of Interest: All authors have completed the ICMJE uniform disclosure form (available at http://dx.doi.org/10.21037/atm-20-4570). The authors have no conflicts of interest to declare.