Total knee arthroplasty (TKA) is a common surgical procedure performed in clinical settings. The reported rate of complications after TKA in most publications is relatively low, but when complications are reported in detail, the proportion of knees with complications may rise to 23.6% (1). Wound complications after TKA can manifest variously, including superficial skin infection, wound dehiscence, skin necrosis and deep joint infection. A previous study of patients after TKA showed that the incidence of deep infections from the poor healing of incisions was 6%, whereas it was only 0.8% in those without surgical wound complications (2). This suggests that early management of surgical wound complications after surgery could prevent deep infections, which may have a pronounced impact on patient prognosis. Skin necrosis rarely occurs after TKA, but it is difficult to manage and may cause severe complications when it does occur. Presently, some patients do not receive appropriate or timely treatments of their surgical wound complications, and this is partly due to lack of attention or inadequate clinical knowledge and reconstruction skills. Inappropriate treatments might result in devastating consequences, including exposed prosthesis and deep joint infections, and further lead to removal of implants or amputation (3,4). Whether to use a single- or multiple-stage approach to treat the incisional infection or skin necrosis after TKA is still unclear. Here, we report a rare patient who suffered massive skin necrosis after TKA surgery. We performed extensive debridement and then developed massive soft tissue defect with exposed implants. Single-staged surgery was conducted to reconstruct the large tissue defect by the medial and lateral gastrocnemius muscle flaps and the patient finally achieved satisfactory outcome. We present the following case in accordance with the CARE reporting checklist (available at http://dx.doi.org/10.21037/atm-20-4445).

A previously healthy 78-year-old female patient was diagnosed with right knee osteoarthritis and underwent TKA at the local hospital on May 15, 2018. A medial parapatellar approach through the anterior midline skin incision was performed. Low molecular weight heparin (4,100 IU per day) was used to prevent deep venous thrombosis after surgery. Postoperatively, she developed skin necrosis surrounding the incision site, and the area of necrosis gradually enlarged. She was transferred to our hospital on May 25, 2018. She claimed the medical history was normal other than the current condition. Her temperature was 36.9 °C at the hospital admission. On the physical examination, her right knee was slightly swollen with normal skin temperature. A large area of irregularly shaped black necrotic skin was observed at the incision and anterolateral aspect of the right knee (Figure 1A). The range of motion of the knee was between 10° and 40°. Laboratory examination showed the white blood cell (WBC) count was 7.7×109/L, C-reactive protein (CRP) was 5.2 mg/L, and erythrocyte sedimentation rate (ESR) was 46 mm/h. We conducted aspiration of the knee joint and synovial fluid analysis. The bacterial culture was negative and the WBC count of the fluid was 700 cells/mL. Based on these evaluations and the patient’s medical history, the possibility of joint infection was excluded. Massive skin necrosis was confirmed. 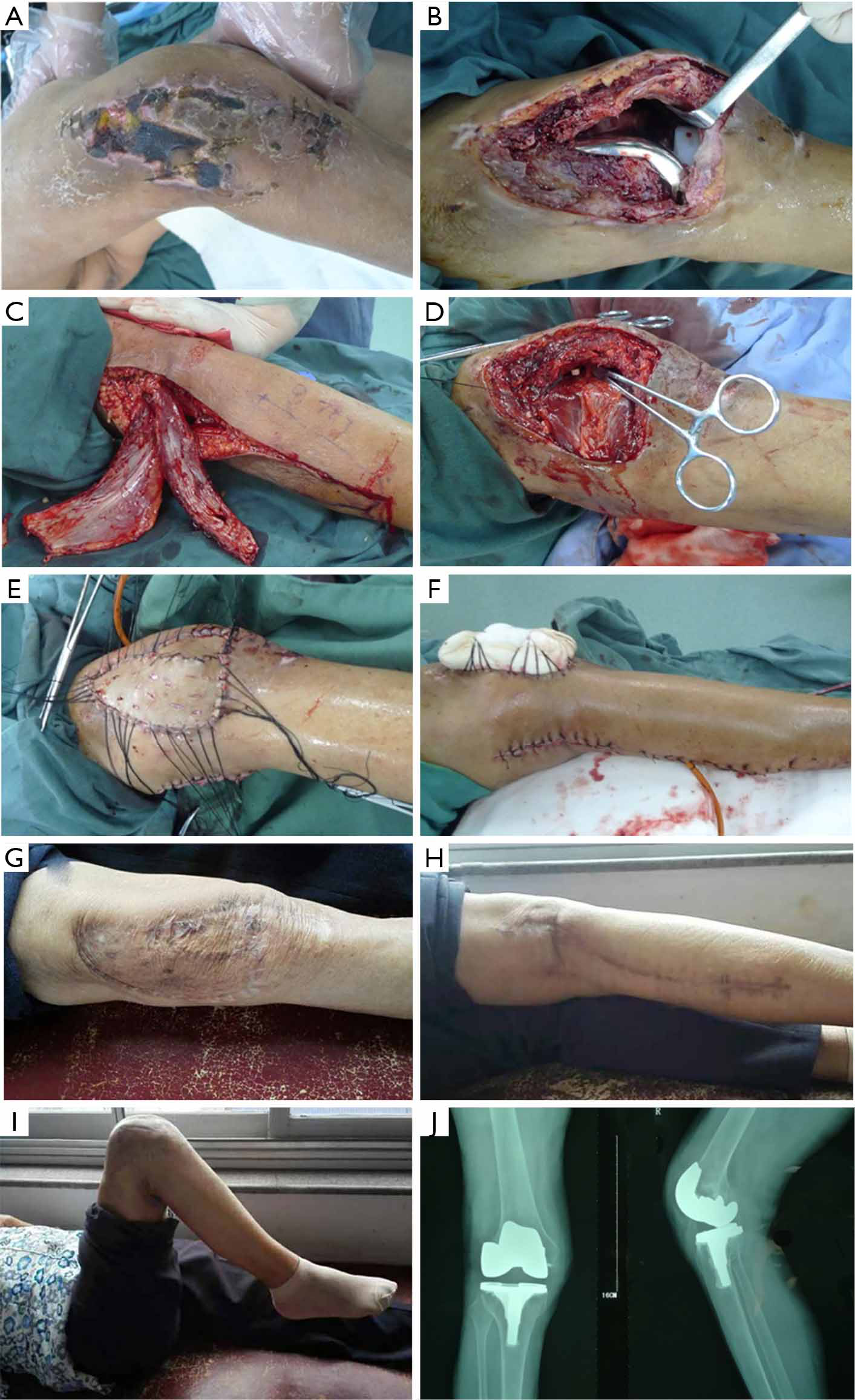 Three days after admission, this patient received single-staged surgical debridement and reconstruction of the skin and soft tissue defect under general anesthesia. Firstly, the necrotic skin and subcutaneous tissues were thoroughly debrided. Joint capsule was opened and the knee prosthesis was exposed, and no apparent inflammatory fluid was found in the joint cavity (Figure 1B). Partial synovectomy was performed; the joint cavity and wound were rinsed with hydrogen peroxide, and followed by thorough irrigation with at least 6 L of normal saline. After wound hemostasis, as massive tissue defect (about 18 cm × 10 cm) was left, the medial and lateral gastrocnemius muscle flaps were both released and transferred through a subcutaneous tunnel to completely fill the wound defect (Figure 1C,D). The knee was kept in the extension position and the muscle flaps were sutured to the surrounding soft tissues. A drainage catheter was placed under the muscle flap. The muscle flaps were covered with meshed split-thickness skin graft and then packed with a gauze pad (Figure 1E,F). The donor site wound of the muscle flaps was sutured directly.

The knee joint was secured with a plaster cast and kept immobilized in the extended position for 2 weeks after the operation. Intravenous antibiotic (vancomycin 0.5 g twice per day) was given for 2 weeks. One week after the operation, the cotton pad was removed, and the skin graft showed good healing. The surgical incisions had also healed well with no incisional complications. The patient was then discharged and followed up in the clinic every month. No swelling, tenderness, or evidence of knee infection was noted during follow-up. 1 year after the operation, the skin graft maintained a satisfactory appearance without scar contracture (Figure 1G,H). The right knee maintained good function, and the range of motion was 0° to 130° (Figure 1I). Reexamination of X-ray showed that the prosthesis was normal without signs of loosening, bone destruction etc. (Figure 1J).

Written informed consent was obtained from the patient for publication of the case report and accompanying images or photos.

Wound complications after TKA can result in significant morbidity to the patient, deep infection, additional surgeries, and increase cost and recovery period (3,5). It is reported that patient risk factors, such as immunosuppressive therapy, poor nutrition, infection elsewhere, diabetes mellitus, smoking, renal failure, and alcohol abuse, could contribute to development of postoperative wound complication (6,7). Intraoperative risk factors of wound complication can be greatly reduced with careful planning. Consensus had been formed that most of the blood supply arises from the medial knee (8). Moreover, the vastus lateralis muscle extends less distally compared to the vastus medialis (7). Blood supply is therefore more at risk on the lateral aspect and skin necrosis is illustrated more commonly seen on the lateral skin edge, which was consistent with our case. Better understanding of the blood supply to skin around the knee, detailed preoperative planning, gentle handling of soft tissues and meticulous hemostasis during operation are essential to avoid wound complications. Postoperative risk factors for wound complications include tight dressings and large subcutaneous hematomas (9). There is still controversy whether the use of thromboprophylaxis would increase the risks of postoperative bleeding and infections (10). In addition, it is proposed that passive knee motion would reduce the transcutaneous oxygen saturation (11). For high-risk patients, very aggressive physiotherapy is recommended to be avoided in the postoperative early stage.

Clinically, there is no consensus on how to manage skin necrosis after TKA. Due to concerns that the infection could result in loosening of the prosthesis or even surgical failure, a number of surgeons recommend a multiple-stage approach. However, this treatment requires extensive time, and the patient might miss the optimal time window to initiate knee exercises and rehabilitation. Wound complications require prompt attention and expedient care, as they could cause devastating outcomes. Modifiable risk factors should be addressed prior to surgery. Detailed preoperative planning and meticulous surgical technique were warranted. A tension-free closure is crucial to prevent skin necrosis. Thus, use of soft tissue expanders preoperatively, or a planned gastrocnemius flap at the time of the TKA could help avoiding wound complications (9). When a wound problem is present, decrease the intensity of physiotherapy is necessary to prevent the complications aggravated. A strong consensus had provided that a persistently draining wound for >5 to 7 days should expeditiously undergo surgical intervention to prevent deep infection (12). Aspiration of the knee joint should be performed to confirm the presence of a deep infection. Differential diagnosis is based on the systemic and local evaluations and on laboratory tests. Patients with joint infections commonly have fever and local symptoms such as redness and swelling around the knee joint with pain or purulent exudation from the incision. A WBC count in the synovial fluid >28,000 cells/mL should be considered highly indicative of deep infection (13). Incisional exploration, excising necrotic or non-viable skin, and evacuating any hematoma should be performed. If the joint capsule is compromised, treatment should include opening the joint, performing a thorough debridement and irrigation. For deep joint infections, it is suggested that multiple-staged treatment approach might be more effective and reliable (9,14).

In our patient, we excluded the possibility of joint cavity infection, even though massive tissue defect was left and the prosthesis was exposed after extensive debridement, a single-staged approach acquired complete reconstruction. This allowed the patient to perform rehabilitation as early as possible and obtain satisfactory knee joint functional recovery. The gastrocnemius muscle was chosen during the surgical repair, as it can provide wide coverage for the repair of soft tissue defect while usually result in minimal functional loss and comorbidity (15). A medial gastrocnemius muscle flap has been suggested for wound closure in the knee, but for large tissue defect as like our case, a combination of medial and lateral gastrocnemius muscle flap could obtain adequate coverage. The gastrocnemius muscle flap is supplied with sufficient blood which may be help in resisting infection and wound healing. The tendon of the gastrocnemius could also facilitate reconstruction of the patellar or quadriceps tendon (16,17). Multiple local flaps, such as saphenous fasciocutaneous flap, lateral supragenicular perforator flap, reversed gracilis pedicle flap, as well as free flaps have also been introduced for the coverage of knee defects (14,18).

In summary, our experience has informed us that surgical wound complications after TKA are manageable. Prompt attention and expedient care should be paid before a minor problem aggravates to a major one. Extensive debridement should be performed. Wound reconstruction skills, such as skin graft, flap coverage or microvascular techniques, are invaluable for management of the challenging problems. Necessary examination and tests should be performed to rule out infection of the joint cavity. If there is no deep infection, we suggested one-stage surgical treatment can repair the wound in a timely manner and facilitate early rehabilitation to achieve satisfactory knee functional recovery.

Reporting Checklist: The authors have completed the CARE reporting checklist. Available at http://dx.doi.org/10.21037/atm-20-4445

Conflicts of Interest: All authors have completed the ICMJE uniform disclosure form (available at http://dx.doi.org/10.21037/atm-20-4445). The authors have no conflicts of interest to declare.

Ethical Statement: The authors are accountable for all aspects of the work in ensuring that questions related to the accuracy or integrity of any part of the work are appropriately investigated and resolved. The study was conducted in accordance with the Declaration of Helsinki (as revised in 2013). Written informed consent was obtained from the patient for publication of the case report and accompanying images or photos.