Locally advanced non-small cell lung cancer (NSCLC) has always been recognized as a highly heterogeneous clinical issue (1). Concurrent chemoradiotherapy and surgery along with chemotherapy or chemoradiotherapy, as the two main treatment modalities, have been offered for patients with locally advanced disease. Although neoadjuvant chemoradiotherapy has been recommended as one of the clinical practices based on current National Comprehensive Cancer Network guidelines, a multimodality regimen for this malignant disease is still heterogeneous, and the prognosis remains unsatisfactory (2). In previous research, neoadjuvant therapy prior to surgical resection has been demonstrated to provide favorable tumor shrinkage and disease-free survival (DFS) for patients with locally advanced NSCLC (3-5).

The anaplastic lymphoma kinase (ALK) gene rearrangement is one of the significant driver mutations that can be detected in 4% to 6% of NSCLC patients (6). Enormous progress in efficacy and long-term survival has been achieved by applying ALK receptor tyrosine kinase inhibitors (TKIs) in advanced NSCLC (7). Crizotinib, as a typical ALK-TKI drug, was proven to be superior to combined chemotherapy in the first-line setting for advanced ALK-positive NSCLC by the PROFILE 1014 trial (8), with an improved objective response rate (ORR) (74% vs. 45%) and progression-free survival (PFS) (10.9 vs. 7 months). Furthermore, crizotinib has shown a more rapid 6-week response compared to the 12-week response of chemotherapy (9). However, research focusing on applying ALK-targeted treatment in locally advanced NSCLC or neoadjuvant therapy has rarely been reported, and the scant trials and studies that are available are limited in offering reliable evidence due their small sample sizes.

Thus, definite conclusions concerning the efficacy and optimal settings of neoadjuvant ALK-TKIs urgently need to be found. Here, we present a patient with stage IIIB ALK-positive NSCLC who obtained significant response to perioperative crizotinib treatment. Clinicopathological features of the patient are described in this article in accordance with the CARE reporting checklist (available at http://dx.doi.org/10.21037/atm-20-3927).

Figure 1 Prior to neoadjuvant immunotherapy, computed tomography (CT) images of the chest in November 27, 2018 indicated a 65.0 mm × 61.5 mm mass (★ marked) in the right upper pulmonary lobe, together with enlarged hilar and mediastinal lymph nodes (★ marked). 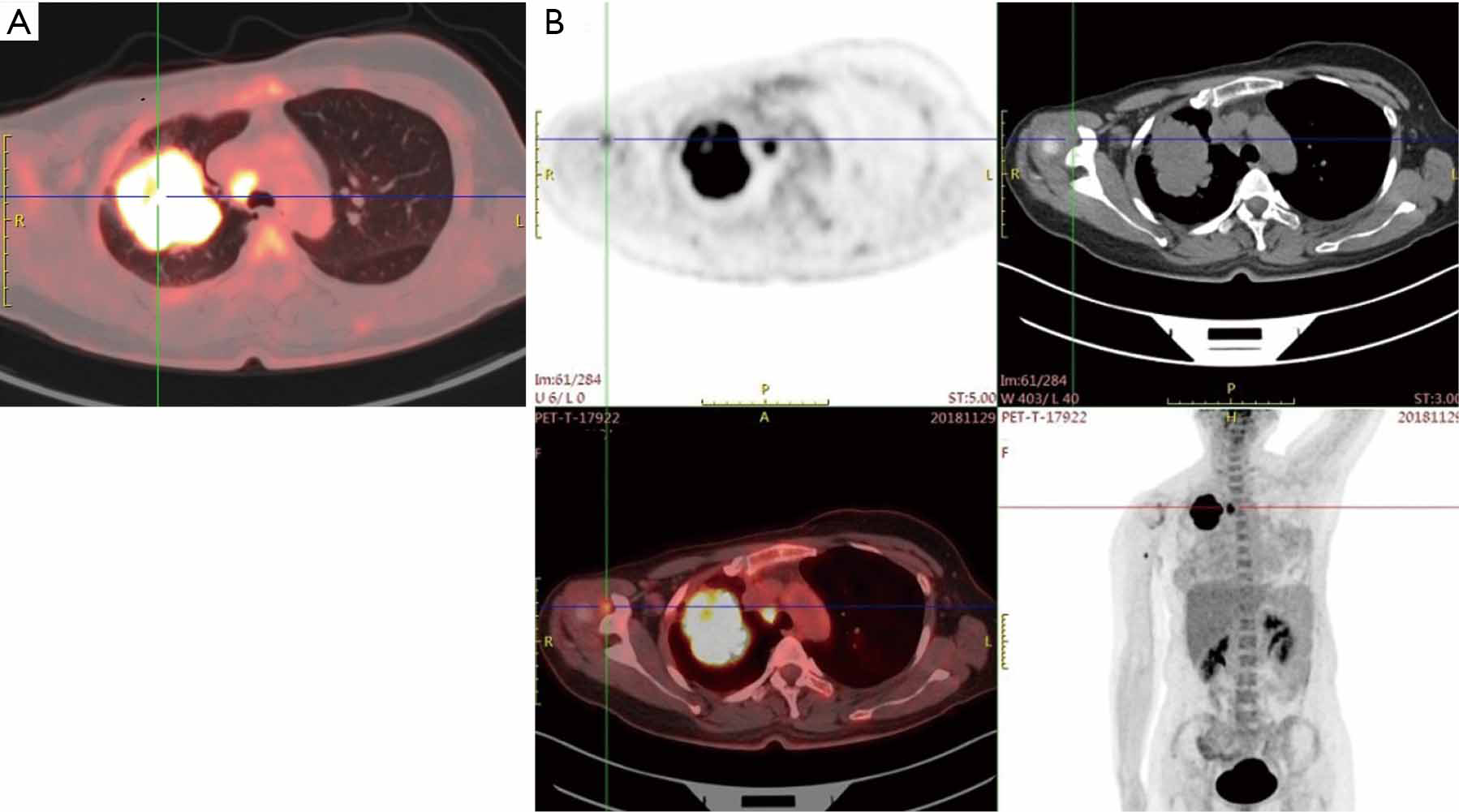 The patient preferred surgical treatment, and the primary tumor and involved lymph nodes were technically resectable. With the assessment of upfront multidisciplinary consultation, neoadjuvant crizotinib administration was selected to induce the downstaging and facilitate the subsequent surgical treatment. The patient proceeded to accept neoadjuvant targeted therapy with crizotinib (2×250 mg per day) from December 20, 2018 to March 4, 2019. Side effects were limited to grade 1 hepatic damage and mild edema of the lower limbs. Chest CT scan (March 10, 2019) after treatment showed that the lesion in the right upper lobe had obviously reduced to 29.3 mm × 28.3 mm, while the enlarged hilar and mediastinal lymph nodes had almost disappeared (Figure 3). Partial remission (PR) after neoadjuvant targeted therapy was achieved in the patient.

Given his good recovery situation and the risk of recurrence, the patient received adjuvant concurrent chemo- and radiotherapy. Four cycles of pemetrexed (860 mg on day 1, every 4 weeks) and cispla­tin (600 mg on day 1, every 4 weeks) were accepted. The postoperative radiotherapy was given at a dose of 1.8 Gy × 28 fx. During the combination therapy, the patient presented grade 1 hepatic damage which was relieved after symptomatic treatment. Treatment was completed by July 2019, and the compliance and tolerance of the patient appeared to be quite high (Figure 4). The patient was last followed up at the clinic 8 months after surgery (December 6, 2019), and no recurrence was observed (Figure 5).

Figure 4 Timeline of diagnosis and treatment.

Figure 5 Comparison of computed tomography (CT) scan after adjuvant chemoradiotherapy indicated no evidence of recurrence during the 8-month follow-up. Imagine of lung window (A) and imagine of vertical window (B).

Written informed consent was obtained from the patient for publication of this case report and any accompanying images.

Since ALK-TKI treatment was proven superior to chemotherapy for advanced ALK-positive NSCLC (9), the indication of ALK-TKI has tentatively been extended to the neoadjuvant therapy settings. In the case series report by Zhang et al. (4), crizotinib (250 mg twice per day) was administered to 11 patients with ALK-positive locally advanced NSCLC in the neoadjuvant setting. In total, 10 (90.9%) of 11 patients had a partial response, with the remaining patient experiencing stable disease response. Surgery was successfully performed on all patients after perioperative crizotinib, with 2 patients (18.2%) achieving pathologic complete response and 3 (27.3%) experiencing pathological node downstaging. Meanwhile, 6 patients had disease recurrence, and the median DFS time was 10.1 months (range, 5.3–20 months). Another case report showed that a patient with ALK-positive mediastinum-invasive NSCLC achieved radiological major response and pathological partial response after neoadjuvant crizotinib (10), with the DFS lasting 44 months as of publication. Previous trials demonstrate that neoadjuvant administration of crizotinib might be a promising therapy in providing an opportunity for resection and prolonged DFS for locally advanced ALK-positive NSCLC patients. The SAKULA trial was a multicenter single-arm phase II study aimed at assessing the efficacy and safety of neoadjuvant therapy with ceritinib followed by surgery in patients with ALK-positive resectable locally advanced NSCLC, with its preliminary results being reported in the 2019 World Conference on Lung Cancer . The ORR was 100% in the all 7 enrolled patients, and 6 out of 7 patients completed the full cycle of treatment and accepted surgery, with complete (R0) resection being achieved in 5 of them. Among the 7 evaluable patients, 4 patients achieved major pathologic response (57%, 95% CI: 18% to 90%) and 2 patients achieved pathologic complete response. Adverse events occurred in all the patients leading to 7 cases of dose interruption and 5 cases of dose reduction. The results revealed the efficacy of neoadjuvant ceritinib, but the optimal dose arrangement and further observation of safety require continued study.

In the case presented here, the patient achieved PR and pathological tumor downstaging in response to the neoadjuvant crizotinib, which suggests that locally advanced ALK-positive NSCLC patients may also benefit from minimally invasive surgery after the induction of targeted therapy. The administration of perioperative crizotinib provided a safe and efficacious chance for resection without increasing the difficulty and complications of the surgery. However, the duration of crizotinib therapy is still open to discussion as it concerns its optimal regimen. Considering that the effect of postoperative crizotinib remains unknown, we applied conventional chemotherapy and radiotherapy to achieve a better prognosis. Moreover, since the second-generation ALK inhibitors such as alectinib and brigatinib have been shown to be more effective than crizotinib in advanced NSCLC (11,12), their tentative application in the neoadjuvant setting is expected.

In conclusion, this is the first report of an ALK-positive stage IIIB NSCLC patient receiving neoadjuvant ALK-TKI treatment and radical minimally invasive surgery. This case demonstrated the safety and efficacy of crizotinib combined with minimally invasive surgery for the adjuvant setting. Further research focusing on neoadjuvant targeted therapy in locally advanced NSCLC can be expected to provide more substantive evidence and clarify the optimal regimen.

Reporting Checklist: The authors have completed the CARE reporting checklist. Available at http://dx.doi.org/10.21037/atm-20-3927

Conflicts of Interest: All authors have completed the ICMJE uniform disclosure form (available at http://dx.doi.org/10.21037/atm-20-3927). The authors have no conflicts of interest to declare.

Ethical Statement: The authors are accountable for all aspects of the work in ensuring that questions related to the accuracy or integrity of any part of the work are appropriately investigated and resolved. The study was conducted in accordance with the Declaration of Helsinki (as revised in 2013). Written informed consent was obtained from the patient for publication of this case report and any accompanying images.