This study aimed to evaluate the effect of adjuvant chemotherapy on the oncological prognosis and prognostic factors of ypT0-2N0 rectal cancer patients after NCRT and radical resection.

We present the following article in accordance with the STROBE reporting checklist (available at http://dx.doi.org/10.21037/atm-20-1278).

Patients and evaluation before the treatment

This retrospective study was conducted at the Department of Colorectal Surgery, Changhai Hospital, Shanghai, China. The study was performed in accordance with the ethical standards of our institutional research committee, and the principles of the 1964 Declaration of Helsinki and its later amendments. Informed consent was obtained from each individual participant included in the study.

The data of resectable locally advanced rectal cancer patients who received NCRT in the Department of Colorectal Surgery in Changhai Hospital between January, 2010 and June, 2018 were retrospectively analyzed. The inclusion criteria were: (I) low or middle rectal carcinoma (a distance of <10 cm between the inferior tumor edge and the anal verge); (II) pretreatment clinical stage was II/III; (III) no obvious distant metastasis; (IV) postoperative pathological results showed R0 resection; (V) pathological diagnosis of ypT0-2N0 after NCRT and radical resection; and (VI) completed neoadjuvant treatment and adjuvant treatment. The exclusion criteria were: (I) other malignant tumors present (except for locally advanced rectal cancers); (II) a history of malignant tumor or relapse; (III) managed by a watch-and-wait strategy after NCRT; or (IV) pathological results showed tumor deposits.

All of the patients underwent colonoscopy and pathological consultation before treatment to confirm the pathological diagnosis. Before treatment, chest computed tomography, magnetic resonance imaging, or computed tomography with intravenous contrast of the liver and pelvis were also performed for clinical staging. Clinicopathological classification and staging were based on the American Joint Committee on Cancer tumor-node-metastasis (TNM) staging system (19).

Follow-up data were retrospectively obtained from the medical records. The follow-up ended on July 21, 2019. Each patient was followed-up every three months for the first two years, every six months for the next three years, and once a year thereafter. Digital rectal examination was performed and the levels of carcinoembryonic antigen (CEA) and carbohydrate antigen (CA) 19-9 were determined at every follow-up visit. Chest computed tomography, magnetic resonance imaging, or computed tomography with intravenous contrast of the liver and pelvis, and full colonoscopy were regularly undertaken. Disease-free survival was defined as the time between the surgery and tumor recurrence or distant metastasis. Overall survival was defined as the time between surgery and death or last follow-up.

All statistical analyses were performed using IBM SPSS Statistics 22.0 (IBM SPSS Statistics, IBM Corporation, Armonk, NY, USA). Categorical values were reported as frequency and percentage, and continuous values were reported as the mean ± standard deviation (SD) or median with range, depending on whether the values were normally distributed or not. Categorical variables were statistically analyzed by the chi-square test and continuous variables were compared using the Student’s t-test or the Mann-Whitney test. Survival analysis was performed using the Kaplan-Meier curve method, and differences in survival between the groups were compared with the log-rank test. Multivariate analysis, using a Cox proportional hazard model, was performed to identify independent predictors of overall survival (OS) and disease-free survival (DFS). P<0.05 (two sided) was considered statistically significant. 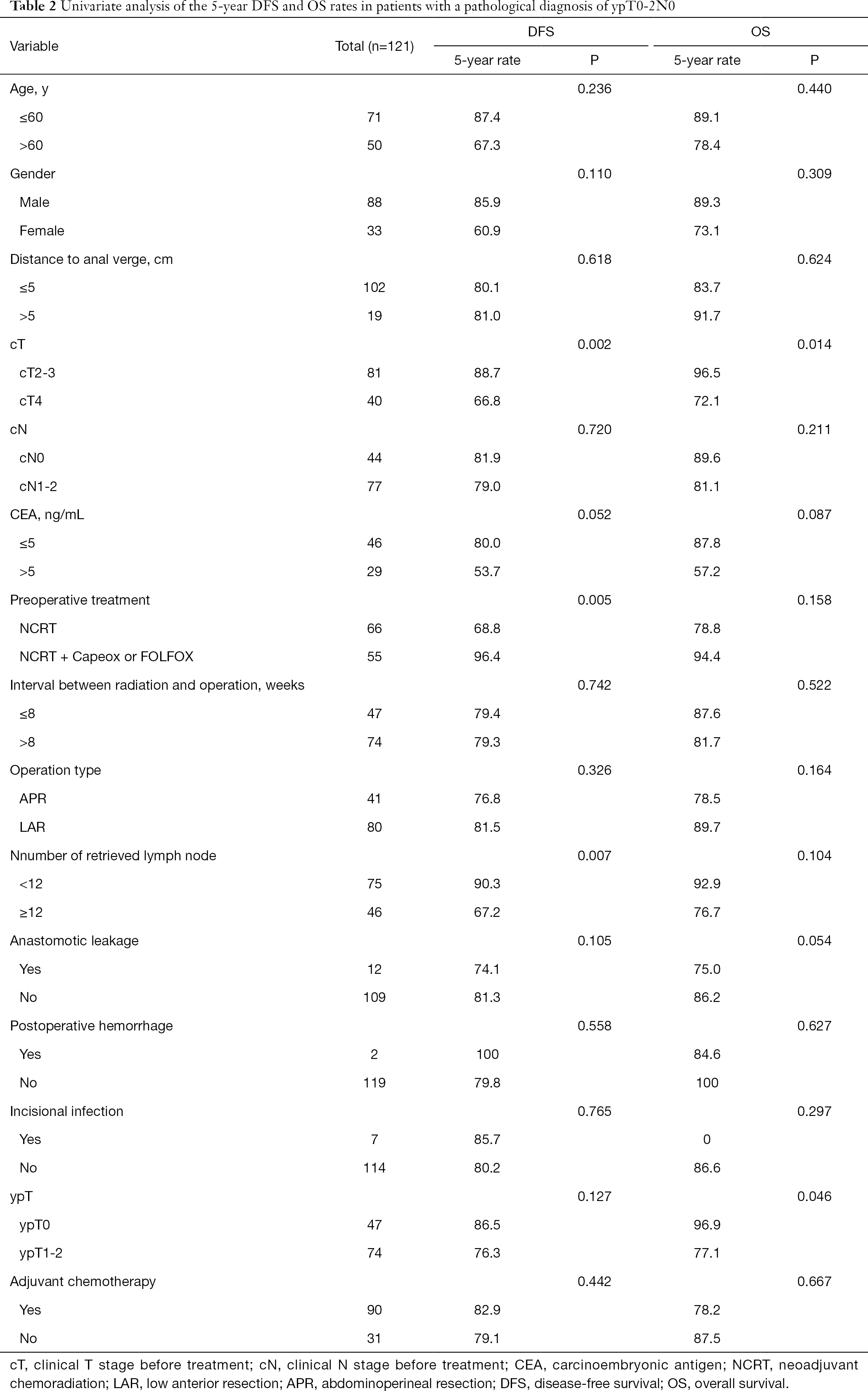 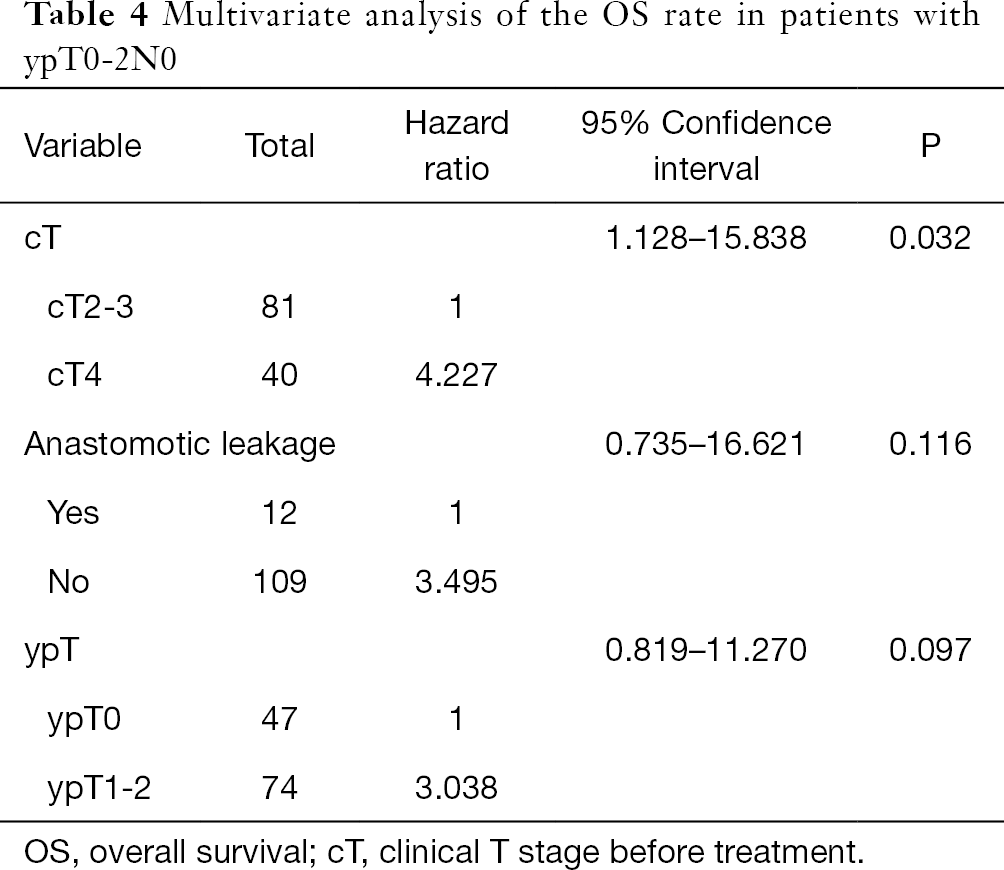 This study showed that rectal cancer patients who underwent NCRT and radical resection with postoperative pathological diagnosis of ypT0-2N0 did not benefit significantly from adjuvant chemotherapy.

The prognosis of patients with tumor regression and T or N downstaging after NCRT for rectal cancer has been shown to improve significantly. Rödel et al. analyzed 385 patients with rectal cancer who underwent NCRT before surgery in the CAO/ARO/AIO-94 study and found that the 5-year disease-free survival rates of TRG4, TRG2 + 3, and TRG0 + 1 patients according to postoperative pathology were 86%, 75%, and 63%, respectively (P=0.006) (12). Multivariate analysis revealed postoperative ypT to be an important independent prognostic factor for disease-free survival (12). Rectal cancer patients with ypT1-2N0 after NCRT and surgery have a better prognosis than patients with ypT3-4N0 (14). Postoperative pathological T and N staging is significantly better for predicting the prognosis than clinical stage before NCRT (12-14). This study showed that ypT0-2N0 rectal cancer patients had favorable prognosis after NCRT and surgery; however, 11 patients (12.4%) still had distant metastases during the follow-up period, including 4 patients whose pathological results showed pathological complete response (pCR). In Cox multivariate analysis, cT instead of ypT was found to be an independent prognostic factor for DFS and OS. This is probably because we only recruited ypT0-2N0 patients with good response to neoadjuvant chemoradiotherapy. Consistent with our results, Shahab et al. found that cT is an independent prognostic factor of OS for patients who show good response to preoperative chemoradiotherapy and surgery (28). Our further analysis showed that cN is not an independent risk factor for these patients, which can possibly be attributed to the accuracy of lymph node metastasis assessment being lower than that of cT staging with MRI (29,30). Shahab et al., also did not find cN to be an independent risk factor of OS in the patients with good response to preoperative radiotherapy (28).

There are several limitations in the current study. Firstly, this is a single-center, retrospective study with a small number of patients. Besides, there were fewer patients in the non-chemo group than in the chemo group. Secondly, some baseline characteristics, including age and anastomotic leakage, were different in the non-chemo and chemo groups. Thus, multivariate analysis was utilized to avoid the possible bias. Thirdly, the data of the level of differentiation in the tumors and serum CEA of patients before NCRT were incomplete. As ypT0-2N0 patients represent a large proportion of patients with rectal cancer after neoadjuvant chemoradiotherapy, randomized clinical trials should be performed in the future.

The authors thank research assistant Yan Cai at the Department of Colorectal Surgery of Changhai Hospital for helpful data support.

Funding: This study was supported in part by grants from the Application Research of Precision Medicine Translation (No. 2017jz06) and National Natural Science Foundation of China (No. 81572358).

Reporting Checklist: The authors have completed the STROBE reporting checklist. Available at http://dx.doi.org/10.21037/atm-20-1278

Conflicts of Interest: All authors have completed the ICMJE uniform disclosure form (available at http://dx.doi.org/10.21037/atm-20-1278). WZ serves as an unpaid Section Editor of Annals of Translational Medicine from Oct 2019 to Sep 2020. The other authors have no conflicts of interest to declare.

Ethical Statement: The authors are accountable for all aspects of the work in ensuring that questions related to the accuracy or integrity of any part of the work are appropriately investigated and resolved. Ethical approval from the Ethics Committee of Changhai Hospital was not required, because of the study’s retrospective case-control nature. The study was conducted in accordance with the Declaration of Helsinki (as is revised in 2013) and approved by the ethical standards of our institutional research committee. Informed consent was taken from all individual participants.