Lung transplantation (LT) is proved to be effective in patients with end-stage lung disease who are failing optimal therapy (3). Recipient selection and the timing of LT is an important (4). Most of the transplant centers use the guidelines published by the International Society for Heart and Lung Transplantation (ISHLT), however it may also be done on individual bases (3-5). Because of the natural history of most recipients with EMP, it could be difficult to decide which patient should be listed for LT (4). LT is a complex surgery and like other major surgeries, it might lead to complications and mortality. For this reason, it is extremely important to choose a recipient in whom expected survival is at less equal or comparable to the survival without surgery (4). Forced expiratory volume in 1 second (FEV1) is used as a prognostic indicator for survival of EMP recipients (4). Studies from Vestbo et al. and Nishimura et al. have shown that drop in lung function up to 5-year period was minimal (6,7). Also, in A1ATD recipients, Seersholm et al. reported 50% 2-year survival when FEV1 is 15% (8). On the other hand, degree of airway obstruction is not the only factor that affects the natural history EMP. Age, hypoxemia, hypercapnia, pulmonary hypertension, low body mass index, poor exercise capacity, magnitude of dyspnea, and emphysema severity are reported to be also important risk factors (2,4,6,9,10).

Unfortunately, these factors have limited strength to define the prognosis of a patient. In order to overcome this limitation, Celli et al. have put together those confounders in order to predict outcome in EMP patients (11). They included four factors that might predict an increased risk of death in EMP patients. They named it as BODE index. The factors they used are body mass index (B), airflow obstruction measured by FEV1 (O), dyspnea score (D), and exercise capacity measured by 6-minute walking test (E) (11). This scoring system (BODE Index) ranges from 0 to 10, with a higher score indicating higher risk of death (2,11). Increase in BODE index greater than 1 point over a 6- to 24-month period reported to double the risk of death (12). The recent ISHLT guidelines published in 2015 includes BODE index in listing patients for EMP (3). BODE index of more than five is recommended for referral (3,11). ISHLT guidelines recommend listing with a BODE score of 7 to 10 or at least one of the following: (I) history of hospitalization for exacerbation associated with acute hypercapnia (pCO2 >50 mmHg); (II) pulmonary hypertension and/or cor pulmonale, despite oxygen therapy; or (III) FEV1 <20% and either diffusing capacity for carbon monoxide (DLCO) <20% or homogeneous distribution of emphysema (3).

Early referral for patients who do not meet above mentioned criteria is also recommended as this might allow the transplant team to identify and address factors that might compromise the future candidacy of the patient, such as ongoing smoking, extremes of weight, poor functional status, severe osteoporosis, excessive corticosteroid use, and coronary artery disease (2).

Lung transplantation is a complex treatment option with a significant risk of perioperative morbidity and mortality. ISHLT guidelines for absolute contraindications are as follows (3): malignancy in the last 2 years, with the exception of cutaneous squamous and basal cell tumors; untreatable advanced dysfunction of another major organ system (e.g., heart, liver, or kidney); non-curable chronic extra-pulmonary infection including chronic active viral hepatitis B, hepatitis C, and human immunodeficiency virus; significant chest wall/spinal deformity; documented nonadherence or inability to follow through with medical therapy or office follow-up, or both; untreatable psychiatric or psychological condition associated with the inability to cooperate or comply with medical therapy; absence of a consistent or reliable social support system; substance addiction (e.g., alcohol, tobacco, or narcotics) that is either active or within the last 6 months.

Extracorporeal membrane oxygenation (ECMO) as a bridge to LT

In EMP patients hypercapnia or hypoxemia will develop despite maximal support and therefore ECMO would be their only chance to survive until a donor lung could be found (14). With the improved knowledge, bridging patients on ECMO is not a contraindication to LT with comparable one-and 2-year survivals to those that underwent LT without preoperative ECMO use (15-18).

Although the experience with LVRS has grown over the last years, the selection of patients for LVRS is still a matter of controversy when the emphysema distribution is not heterogeneous and differs widely among centers (21-25). This concept was first reported by Brantigan (26) and re-introduced by Cooper et al. (27).

For young patients LVRS does not replace the need for LT. However, LVRS is an option for definitive treatment for older patients with significant comorbidities, in whom the transplantation is not indicated.

LT improves the quality of life, however the procedure itself is complex, and requires life-long immunosuppression and confronted to side-effects of these drugs (28).

However, donor shortage is still the main limitation for LT and LVRS is rarely performed (28). In addition, LVRS might be a bridging strategy to LT due to the limited organ pool (29). LVRS is indicated in less advanced lung disease compared to LT candidates. However, there is a group of patients in which both procedures can be offered with improved outcomes (30). Our selection criteria in Zurich for LVRS and/or LT is summarized in Figure 1. 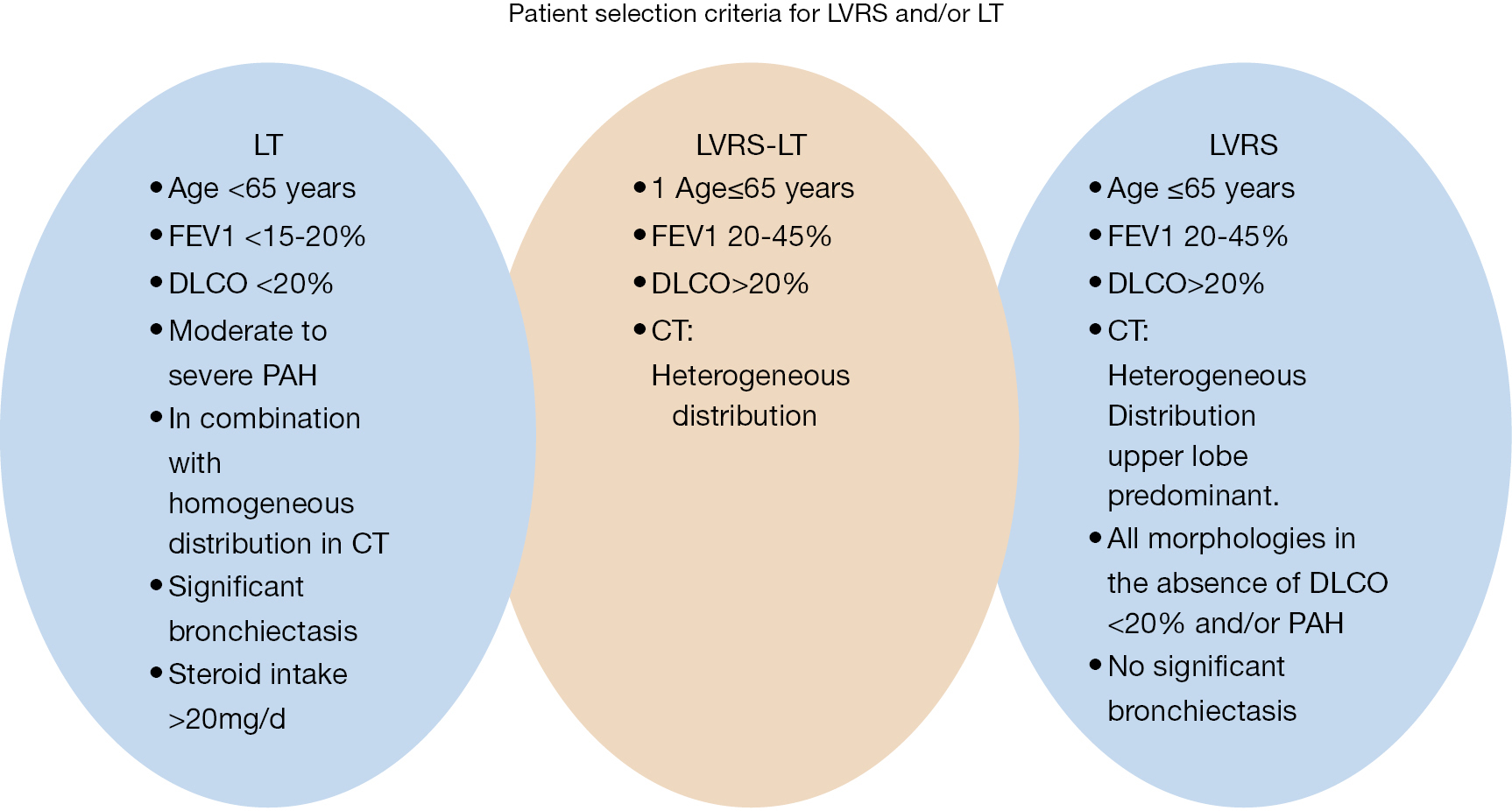 In heterogeneous and in homogenous emphysema relevant symptomatic and functional improvements has been reported. Three to 6 months after operation maximal values were observed with a subsequent decline towards preoperative levels over the following years (31,32). LVRS can be performed in selected patients with advanced EMP who has severe hyperinflation, if the FEV1 and the carbon monoxide diffusing capacity are not below 20% (30-32).

Discussion continues about the effect of pre-transplant LVRS on outcomes after lung transplantation. Early reports demonstrated comparable outcomes (33-35). The main limitation of these studies were the lack of patient selection criteria. Backhus et al. from University of Washington, Seattle reported inferior results in recipients undergoing LT following LVRS compared to LT alone (36). In this paper 174 patients underwent LT for EMP in 15 years of a period. Among these, 36 had pre-transplantation LVRS. They reported that selecting patients for LT with a history of LVRS requires a careful assessment as those recipients experienced inferior survival after lung transplantation (36).

We recently published our single center experience for patients undergoing LVRS followed by LT (n=52) (37). This patient population was, to our knowledge, the largest cohort published so far. We found that outcomes were not different for recipients who underwent combined procedures when compared to recipients who underwent LT only. In addition, Seattle Group reported longer operation times and hospital stays during LT in patients with a history of LVRS (36).

In EMP patients who are potential candidates for LT, LVRS might improve lung function, symptoms and quality of life that might postpone LT for couple of years (30,37). Although there are still concerns (36), previous LVRS had no negative effect on outcome following LT and these patients do not lose their chance for LT (30,37).

Choice of the procedure 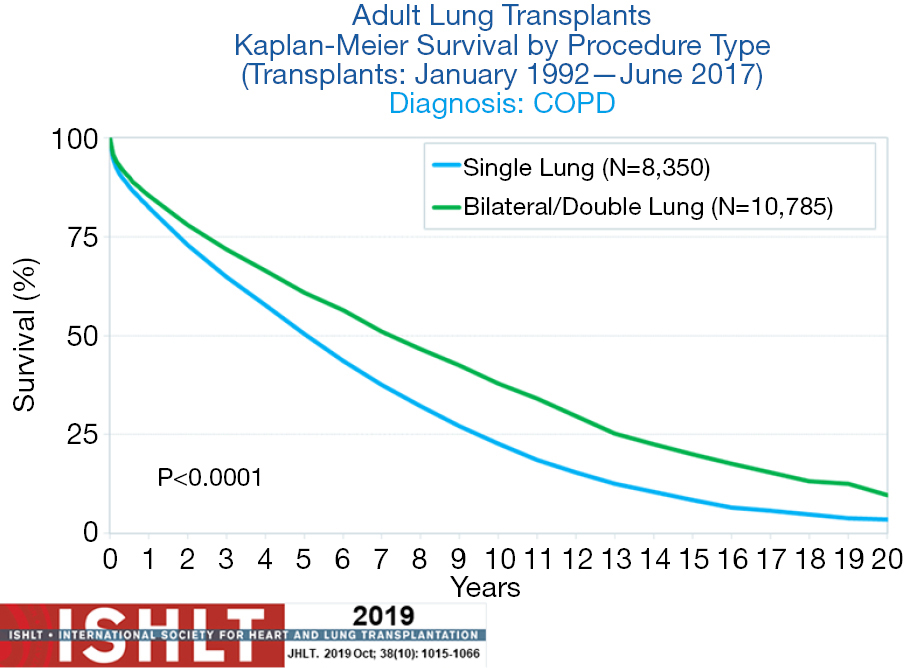 According to the recent ISHLT registry 22.121 lung transplants were performed for EMP (N=19,152) and A1ATD (N=2,969) from January 1995 to June 2018 (1). In 2005, only approximately 50% of the transplantations performed for EMP were BLT. Thereafter the rate of BLT increased up to 81% in 2017 (1). Ventilation-perfusion mismatching following single lung transplantation and possible graft dysfunction have influenced the centers not to perform SLT. Stevens et al. demonstrated ventilation and perfusion mismatch in SLT recipients (43). In spite of this report, transplant centers started to perform SLT in the early 90’s with good results (44,45).

Majority of the centers prefer BLT, due to complications that might occur from the native lung (45-48). Short total ischemic time and operation time are advantageous of SLT that lead to lower morbidity and mortality (49).

Sunderasan et al. demonstrated the outcomes of their EMP patients who underwent LT (50). They reported comparable outcome in patients received BLT or SLT. 5-year survival was 53% in BLT recipients and 41% in SLT recipients (50). In another study, Cassivi et al. reported 5-year survival rate of 66.7% in BLT and 44.9% in SLT recipients (51) Delgado et al. from Spain demonstrated similar cumulative 5-year survival rate, excluding preoperative mortality, with 54% overall, 59% for SLT and 56% for BLT. The frequency of BOS was 34% in SLT and 42% in BLT. Acute rejection episodes and perioperative complication rates were also comparable between SLT and BLT groups (52).

A multicenter study showed that BLT was superior to SLT (55). Based on these studies, BLT has similar short-term results compared with SLT, but better long-term results (56).

Following LT physiologic parameters like FEV1 and FVC improve in EMP recipients (64). Cases who undergo BLT show much more improvement. After SLT, FEV1 increases to 60%, whereas the FEV1 exceeds 80% in BLT (50,65,66).

6MWT distance did not show significant difference in daily physical activity between the SLT and BLT among recipients (67,68).

In addition, exercise performance as assessed by the age-adjusted parameter of maximum oxygen consumption was also comparable between SLT and BLT (69,70).

The type of the procedure and development of bronchiolitis obliterans syndrome (BOS) attracted the attention of several investigators. These studies failed to detect a difference in incidence of bronchiolitis obliterans syndrome (BOS) among recipients of SLT versus BLT (44,50,66). On the other hand, increased freedom from BOS in BLT recipients was reported at both 3 and 5 years following LT (71).

Careful patient selection and to offer the best surgical option are extremely important to reach successful outcomes in emphysema patients. Lung transplantation is an option for those who have failed optimal medical treatment. LVRS postpones the need for LT for up to several years and leads to improvement in nutritional and functional status until LT. LVRS does not compromise the outcome in case of future LT. Bilateral LT offers the best long-term outcome in these patients.