Diagnostic approach to orthostatic proteinuria: a combination of urine micro-proteinuria with ultrasonography of the left renal vein

In the current era, there has been a tremendous focus on proteinuria as a prognostic indicator of acute kidney injury and chronic kidney disease (CKD) (1-4). KDIGO in 2012 included albuminuria in staging and progression of CKD (1). Macroalbuminuria, defined as urine albumin >300 mg/day, is an independent risk factor for progression of CKD in children and adults (2-4). Proteinuria is classified as glomerular, secondary to damage to podocytes and filtration barrier (5,6). Tubular proteinuria develops when the proximal tubule fails to reabsorb the filtered low molecular proteins. Secretory proteinuria is from increased secretion of Tamm- Horsfall protein and finally Interstitial proteinuria (5,6). Proteinuria is further regrouped as persistent/fixed, transient, and orthostatic. Persistent proteinuria is seen in glomerular disorders, which can be nephrotic or non-nephrotic. Transient proteinuria is commonly associated with infections, fevers, dehydration, sepsis, and subsides with a resolution of the underlying cause (7).

Orthostatic proteinuria (OP) is a notable cause of asymptomatic proteinuria in children and young adults (8). It is frequently encountered in children with slender body habitus and low body mass index (BMI) (9). OP is defined as the presence of protein in the urine sample collected in an upright position while no protein detected in supine posture (10). It is evident that OP accounts for 15 to 20% of asymptomatic proteinuria in children (11). Although OP is a relatively benign entity, there are several reports of subtle glomerular lesions on renal biopsy specimens (12).

While underlying mechanism of OP is not clearly defined, multiple hypothetical concepts are proposed, Figure 1 (13). Some authors suggested that OP could be an exaggerated physiological response in an upright posture, while the total protein excretion is less than 150 mg/day (10). A probable explanation could be attributed to elevated levels of renin and angiotensin II. Hemodynamic effects of Angiotensin II results in renal efferent vasoconstriction, further leading to increased glomerular filtration pressure and elevated protein excretion (10). Angiotensin II also has non-hemodynamic local effects in releasing free oxygen radicles, cytokines, leukotrienes, and increased metalloproteins with subsequent proteinuria. Other theories include activation of the complement cascade, subtle Immunological damage to the basement membrane, and nutcracker syndrome (NCS) (13-15). 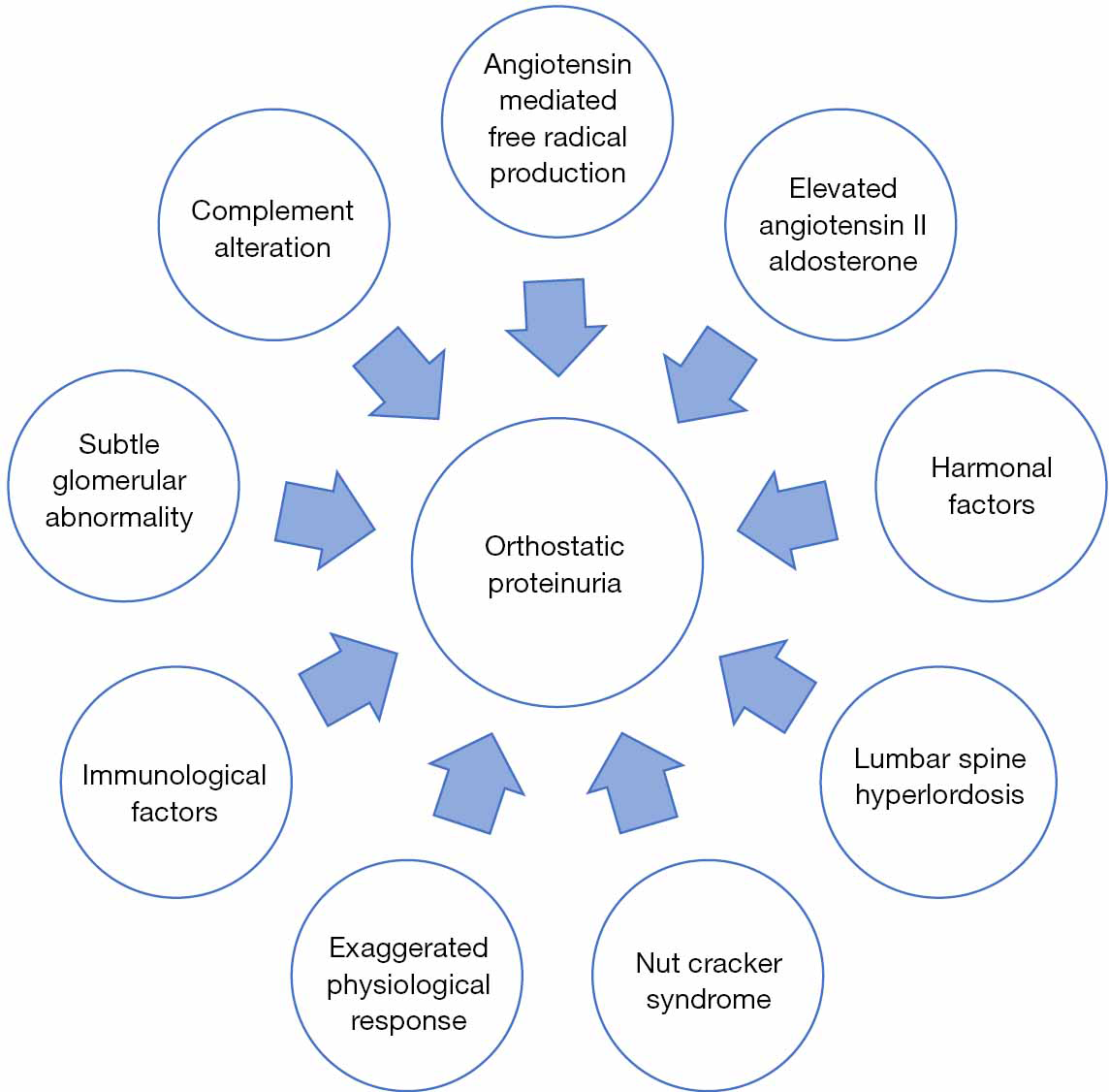 NCS is originally described by El-Sadr and Mine in 1950 as compression of the left renal vein (LRV) between aorta and superior mesenteric artery (SMA) (16). Later Shintaku et al. in 1990 correlated entrapment of LRV with OP (16). The two-common developmental variants of LRV are aorto-mesenteric (anterior origin) and retrocaval (posterior origin) (17). Aorto-mesenteric or anterior nutcracker is the entrapment of LRV between Aorta and SMA. Posterior nutcracker corresponds to the compression of retro-aortic renal vein between aorta and vertebral body (18,19). It usually becomes symptomatic in second and third decades of life. Nutcracker phenomenon is distinguished from NCS where later presents with clinical features secondary to distal renal and gonadal vein dilatation. In asymptomatic individuals, the presence of engorged renal and collateral veins could be seen as an incidental finding on imaging and is termed as nutcracker phenomenon. Patients with NCS commonly present with left flank pain, pelvic congestion pain (20), autonomic dysfunction, dysmenorrhea, dyspareunia, varicose veins, microhematuria, OP (21,22).

In the current issue, Niu et al. (8) evaluated the combination of microproteinuria along with Doppler ultrasonography in diagnosing OP. Sixty patients out of 75 are diagnosed with OP by clinical and imaging criteria. Fifty-eight subjects have entrapment of LRV, which implies nutcracker phenomenon contributes significantly to OP. Since no gold standard test is available to diagnose OP the combination of urine microprotein tests along with renal vein ultrasound significantly increased specificity, positive predictive value and positive likelihood ratio. Another interesting finding noted is that urine albumin/creatinine ratio, and IgG/creatinine ratio were subsequently high in the urine samples of patients with OP compared to patients with non-OP. Micro-molecules such as NAG and α1Mu were excreted at similar rates between both groups, which implies that glomerular proteinuria in OP mostly comprises of albumins and globulins. Doppler ultrasonography is used as an imaging modality in measuring the AP diameters and Peak velocities at different points of the LRV to yield diagnostic accuracy. Ultrasound is a safe, relatively cheap, noninvasive initial diagnostic modality used to diagnose NCS. Doppler ultrasound with flow and peak velocity measurements almost proved to be a near equivalent imaging modality to computed tomography angiography (CTA), magnetic resonance angiography (MRA). Doppler ultrasound, in combination with clinical test significantly increased the likelihood of a diagnosis of OP.

Focusing on some of the limitations, it is undoubtedly difficult for the patients to undergo all three tests, including the upright lordotic test and Robinson test, which are cumbersome. The sensitivity and specificity of ultrasound are less compared to CTA and MRA with less accurate reproducibility of the results. Also, the measurement of diameters and peak velocities of LRV can vary between operators in conveying consistent results. It could be challenging to measure the peak velocities and diameters of the narrow portion of LRV in children as the area is too small.

In the literature, there is no gold standard test for diagnosing OP. Thorough history taking and physical examination to delineate the extent of symptoms will be useful to determine the management approach. Clinicians can start investigations by checking urine analysis, urine culture, urine cytology, complement activity, and serological studies to rule out other causes of proteinuria (Table 1) (23). Upright and recumbent urine protein to creatinine ratio can be performed as an initial screening test. A 24-hour split urine test has been traditionally used diagnostic test. Patient is asked to collect a 16-hour urine sample during the day, followed by an 8-hour supine sample collection separately. Presence of elevated protein >150 mg/day in day sample with no protein in recumbent sample points to the diagnosis of OP. Other clinical test as narrated by Niu et al. include West test, Robinson test and upright lordotic test (8). 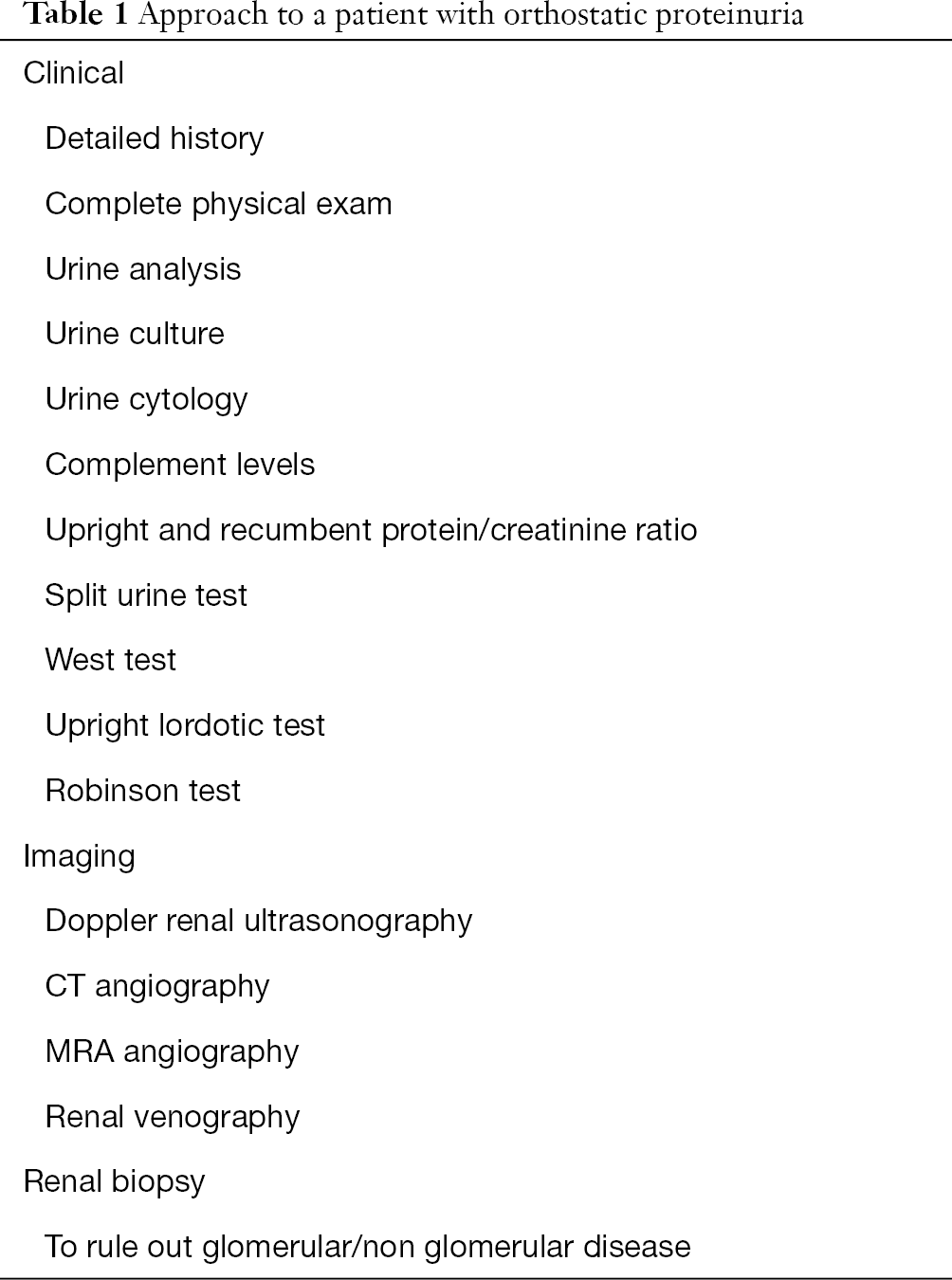 Table 1 Approach to a patient with orthostatic proteinuria
Full table

Renal venography is performed as a gold standard to confirm NCS (24,25). However, given the invasive nature of the test, imaging with Doppler ultrasonography, CTA or MRA are acceptable tools (26). A specific diagnostic criterion has not been standardized for diagnosis of NCS by Doppler ultrasonography. Having said that, in a study done by Kim et al. (27), the mean ratio of LRV diameter at hilum to aorto- mesenteric region >5 and ratio of peak velocities at the same points >5 has 80% sensitivity and 94% specificity. Takebayashi et al. also reported the detection of collateral veins around LRV could be a reliable criterion in diagnosing NCS (22). In a study by Takahashi et al., including 93 pediatric patients compared digital subtraction angiography, Doppler ultrasound, and venography pressures in defining imaging characteristics. They postulated several ultrasound grades in defining probable, borderline, and definite nutcracker phenomenon (28).

OP is a benign entity and conservative approach is indicated especially in children <18 years old. In most children, spontaneous remissions are reported with further growth and weight gain (29,30). In an Italian study including 13 subjects, OP disappeared after 6 years in at least 9 subjects with conservative management (31). Angiotensin-converting enzyme (ACE) inhibitors can be prescribed in adults with persistent proteinuria to slow down microalbuminuria. Use of ACE Inhibitors is substantiated in patients with persistent OP given subtle glomerular changes on kidney biopsy specimens and elevated angiotensin II levels (32). However, if patients are severely symptomatic from nutcracker syndrome, surgical procedures including LRV bypass, excision of varicosities, SMA transposition, renal to inferior vena cava shunts, external and intravascular stenting and even nephrectomy have been reported (33-35).

OP accounts for one of the common causes of proteinuria in children and is mostly asymptomatic. However, it becomes essential to diagnose OP and rule out other conditions. NCS plays a significant role in the etiology of OP. A combination of urine micro proteinuria along with ultrasonography, has increased specificity in diagnosing this condition and can be used as a confirmatory diagnostic modality.

Conflicts of Interest: All authors have completed the ICMJE uniform disclosure form (available at http://dx.doi.org/10.21037/atm.2020.02.50). WC serves as an unpaid editorial board member of Annals of Translational Medicine from Mar 2020 to Feb 2022. The other authors have no conflicts of interest to declare.