In the last decades, immune-checkpoint inhibitors have markedly improved the survival outcomes of many solid tumors (1). Multiple myeloma (MM) is a hematologic malignancy, in which there is strong evidence of the role of an altered immune system in the pathogenesis of the tumor. This hypothesis was corroborated by the efficacy of some drugs that target the immune environments, such as the immunomodulatory drugs (IMiDs) (2-4). High expression of PD-L1 (one of the ligands of the immune checkpoint receptor PD-1) on MM neoplastic cells and other bone marrow microenvironment cells added a biological rationale of its use (5,6). In the preclinical setting, the addition of an IMiD to PD-1/PD-L1 inhibitors increased tumor cell death (4,7).

Pembrolizumab is an anti-PD-1 humanized IgG4k monoclonal antibody (mAb) that showed a promising response rate in early phase I and I/II clinical trials in combination with backbone therapies against MM, namely lenalidomide and dexamethasone (Rd) and pomalidomide and dexamethasone (Pd) (8). Badros et al. reported an overall response rate (ORR) of 60%, a median progression-free survival (PFS) of 17.4 months and an overall survival (OS) not reached (NR) with pembrolizumab in combination with Pd (Pembro-Pd) in 48 heavily pretreated relapsed and/or refractory (RR) MM patients (9). In another phase I study combining pembrolizumab with Rd (Pembro-Rd), ORR was 44%, median PFS 7.2 months and 2-year OS 65%. In these two trials toxicities were similar, with 16% and 13% of patients who experienced immune-related adverse events (iRAEs; Table 1). 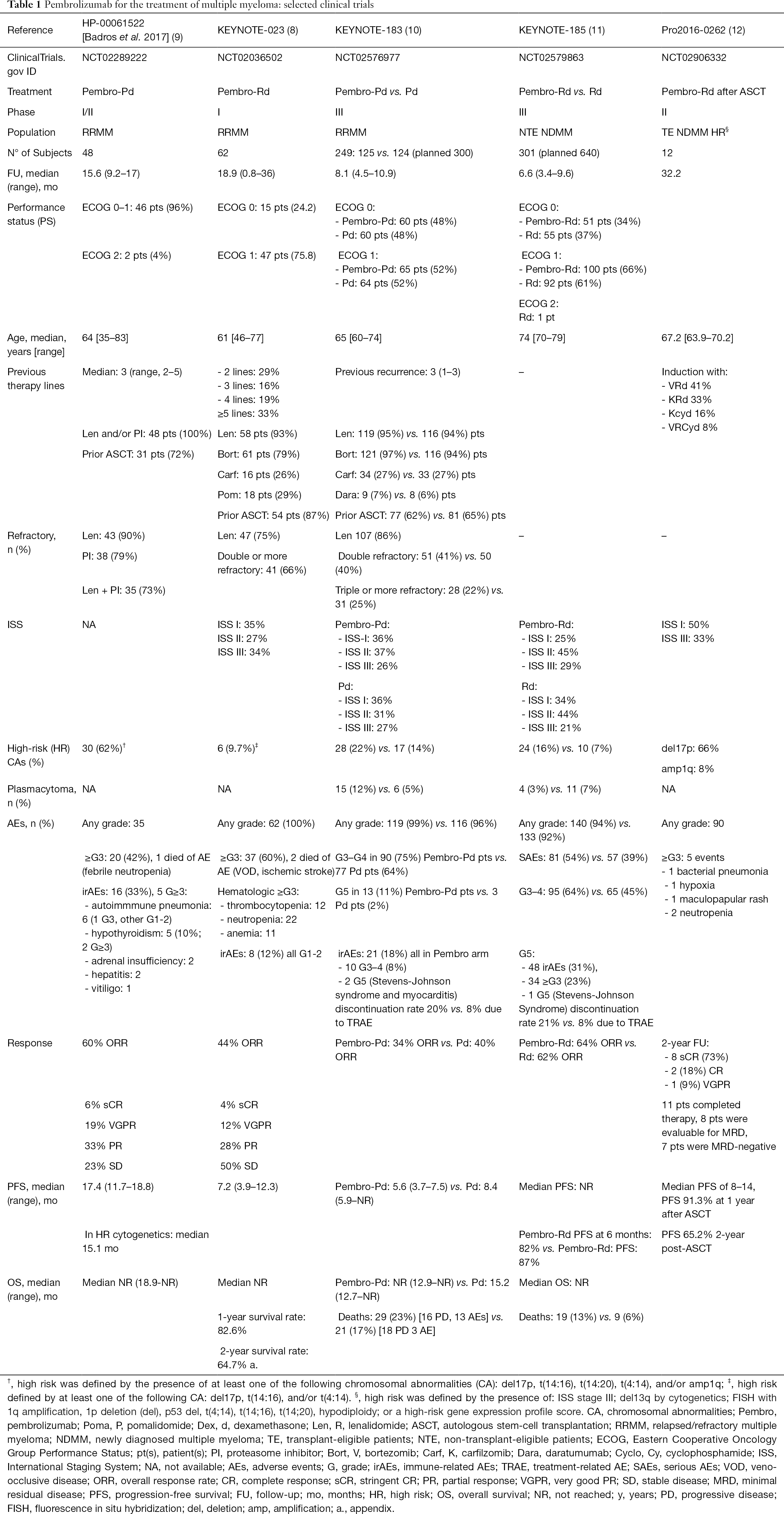 At the time of the interim analysis of the KEYNOTE-183, 29 patients died in the pembrolizumab group [16 due to progressive disease (PD) and 13 due to AEs] vs. 21 in the control group (18 due to PD and 3 due to AEs). Causes of deaths were mainly infections and cardiac events. Of the 13 deaths in the pembrolizumab group, only 4 were considered treatment-related AEs (TRAEs) and 2 were considered iRAEs due to pembrolizumab (Stevens-Johnson syndrome and myocarditis). This study also showed higher rates of serious AEs (SAEs), grade (G) 3–4 AEs and discontinuations due to AEs occurred with Pembro-Pd. In general, G≥3 iRAEs occurred with a higher incidence: ~18% of subjects, compared to 10% in the study reported by Badros et al.

Both trials failed to show higher ORR or time to progression (TTP)/PFS in the experimental arms. A subsequent FDA analysis on the response of patients who experienced or not iRAEs also did not detect a clear benefit of adding pembrolizumab to backbone therapies, not even in patients who developed iRAEs, who might have been those for whom the drugs should have been more active (12). Although iRAEs due to immune checkpoint inhibition are well known and manageable in most tumors, in those trials they seemed to be more frequent and severe; this should be related to a synergistic effect with IMiDs. Besides, irAEs were more frequent in NDMM subjects (KEYNOTE-185) than in RRMM subjects (KEYNOTE-183), possibly unveiling a less exhausted immune system.

The efficacy of continuous therapy relies on tolerability. In this context, it is clear that a high rate of discontinuation due to AEs hinders the efficacy of the treatment itself.

Of note, both trials were stopped after a relatively short follow-up (6.6 months for the KEYNOTE-185 and 8.5 for the KEYNOTE-183), since the increased deaths had been reported quite early. Both trials also showed an imbalance in baseline patient characteristics, with a high number of high-risk patients in the pembrolizumab arms, as compared with the control arms (KEYNOTE-183: high-risk cytogenetics 22% vs. 14%, extramedullary disease 12% vs. 5%; KEYNOTE-185: high-risk cytogenetics 24% vs. 10%). Early deaths, and in particular deaths due to infections, are well recognized in MM patients and often they are not merely related to the treatment per se, but to the immunosuppression induced by the disease itself, particularly in patients at high risk and high tumor burden. In fact, a review of disease characteristics of patients who died in the KEYNOTE-183 showed that high-risk features were more frequently observed in the pembrolizumab group than in the control group. Moreover, a post-hoc analysis looking for strong predictors of death showed that the ECOG performance status (PS) was both prognostic and predictive of outcome (ECOG PS 1 was associated with an increased risk of death: HR 2.3, 95% CI: 1.11–4.76). A similar analysis was performed on the KEYNOTE-185, but it was deemed inconclusive due to the low number of death events [28].

On the basis of the above-mentioned data and focusing on the excess of toxicity as the main reason for the failure of checkpoint inhibitor therapy, we could consider whether these drugs could give better results in a ‘safer’ setting. For instance, these agents could possibly have a role in the consolidation therapy after autologous stem-cell transplantation (ASCT), aiming at achieving a higher rate of minimal residual disease negativity or at sustaining a deep response. In this setting, tolerability may be better because of a better PS. In a phase II trial (NCT02906332), patients received a post-ASCT consolidation with Pembro-Rd, which was given for 2 cycles plus 2 additional cycles without corticosteroid. Twelve patients were treated, with a median follow-up of 32 months. PFS rates were respectively 91.3% and 65.2% at 1 and 2 years after ASCT, with 5% of AEs being of grade >3 (13). However, after the interim analyses of the KEYNOTE-183 and -185 studies, the study was stopped together with all the other studies involving checkpoint inhibitors for the treatment of MM.

One of the possible explanations for the low efficacy and high toxicity of these combinations of immune checkpoint inhibitors and IMiDs could be related to the important level of immunodeficiency in MM patients (10), similarly to what happens with congenital immunodeficiency syndromes, in which the immune response deficit both decreases the activity of the immune system against pathogens and cancer cells and increases the burden of autoimmune disease. Indeed, a deficient immune system is also unable to regulate immune reaction against the ‘self’. In the context of MM, we can hypothesize that the immune system becomes anergic against the tumor and that, at the same time, a deregulated immunity can be boosted by immune checkpoint inhibitors to perform an autoimmune reaction (14,15). Moreover, the use of dexamethasone at such high doses could also decrease the immune response and induce an anergic microenvironment, which cannot be susceptible to checkpoint inhibition (10). It should be noted that immune checkpoint inhibitors have not been combined with corticosteroids in trials for the treatment of solid or hematologic tumors other than MM.

If we consider that part of the toxicity with pembrolizumab plus IMiDs could be related to a synergistic effect of the two drugs on the immune system, but also that we need to overcome immunosuppression, an alternative should be the use of checkpoint inhibitors in combination with other drug classes, such as the mAbs. Anti-CD38 mAbs are known to have a immunomodulatory activity and to be able to activate the ‘frozen’ immune microenvironment, thus reducing immunosuppression (16).

To conclude, given the great results of immunotherapy for the treatment of MM, such as in the case of IMiDs and CAR T cells (3), checkpoint inhibition did not fulfill the promise envisaged during its early usage. Nevertheless, a further investigation of the exact role of checkpoint inhibition in the complex therapeutic scenario of MM is still a challenge that we have to face.

Conflicts of Interest: Both authors have completed the ICMJE uniform disclosure form (available at http://dx.doi.org/10.21037/atm.2020.02.65). FG has received honoraria from Amgen, Celgene, Janssen, Takeda, and Bristol-Myers Squibb; has served on the advisory boards for Amgen, Celgene, Janssen, Takeda, Bristol-Myers Squibb, Roche, AbbVie, Adaptive, and Seattle Genetics. LB has no conflicts of interest to declare.