The reference for esophageal varice (EV) diagnosis is endoscopy, but its invasive nature and certain logistic issues constrain its deployment to larger urban health facilities. Resultantly, endoscopy, especially in emergency settings, is generally not available in remote areas, be they in developed or developing countries, and in these latter, the cost of the intervention may further limit its availability to patients. Furthermore, even in developed countries, the recommended screening for varices needing treatment (VNT) is performed in only about one third of cirrhotic patients (1), thus decreasing the collective life expectancy of this population (2). To address these issues, non-invasive techniques to diagnose EV have been developed over the last 20 years with the main objective of improving VNT screening in cirrhotic patients with regards to primary prevention of variceal bleeding (VB). That body of research led to the Baveno VI recommendation to screen for VNT in compensated advanced chronic liver diseases (cACLD) using a combination of platelets count and liver stiffness measurement by Fibroscan (3). Beyond this popular topic, several teams have set their sights on evaluating the non-invasive diagnosis of EV in patients with upper gastrointestinal bleeding (UGIB) with, here, the main objective of improving causal treatment, especially early vasoactive drug delivery for VB. Classically, the prevalence and imputability of EV are considered sufficiently high to justify the use of vasoactive drugs prior to endoscopy in all patients with known or suspected cirrhosis. Endoscopy within 12 hours is considered mandatory (3) as delays to resulting interventional treatments are responsible for increased mortality (4). Additionally, the effectiveness of vasoactive drugs in suspected VB before endoscopy has been demonstrated in a randomized trial (5). However, this policy of early drug administration and endoscopy cannot be applied everywhere for logistic or economic reasons. In their report evaluating several markers or simple fibrosis tests (Table 1) in a cohort of 2,233 American patients, Rockey, Elliott and Lyles stated that “for all patients with UGIB, non-invasive markers appear to differentiate patients with varices from those without varices and to identify those with a variceal culprit lesion. However, these markers could not distinguish between a variceal culprit and other lesions in patients with cirrhosis” (6). In a work performed in Egypt, Hanafy et al. developed a scoring system for EV prediction in 300 critically ill patients with UGIB. They reported high accuracy in derivation and validation populations for their system, but this latter employed a high number of variables, including ultrasonographic and Doppler criteria, limiting its clinical application (10). In this context, limited by the few available data, a multicenter cross-sectional study was performed by Qi et al. in China in 363 cirrhotic patients of whom 260 had EVs and 180 UGIB (11). In that study, they found that ascites and platelets were independent predictors for EVs, both in the whole population (plus UGIB as a third independent predictor) and in the subgroup with UGIB. The logistic score they constructed with those variables was named the Liaoning score, after the Chinese province where the study was performed. There were however two main limits to that study: there was no validation population and only patients with cirrhosis were included. Two minor limitations were also present: high risk EV (HREV) were not evaluated and the method to select the score cut-off was not stated. 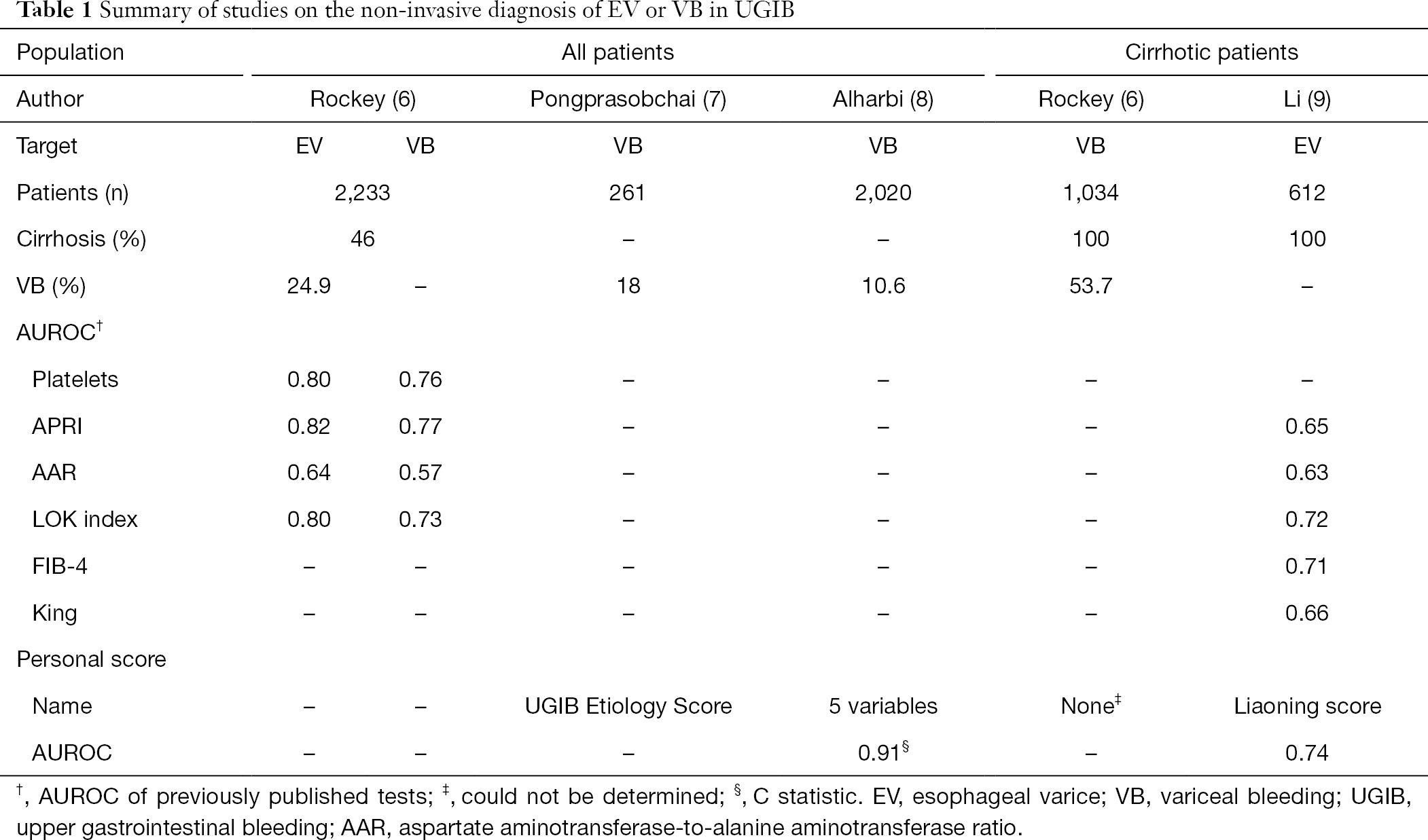 In this issue of Annals of Translational Medicine, Li et al. continue the team’s work and present a validation study involving 612 cirrhotic patients with acute UGIB (9). They evaluated the Liaoning score for patients with UGIB and several other simple tests for the prediction of EVs or HREVs either in their whole population (Table 1) or in a subgroup of patients with hematemesis. They found that the accuracy of the Liaoning score for EVs was higher than that of other simple tests and similar to that reported in the preceding exploratory study (11). However, the statistical significance of differences was not evaluated. The team reported that the Liaoning score could accurately predict the presence of EVs or HREVs (with slightly different cut-offs) and concluded by stating that “(their) findings promote the use of Liaoning score at some hospitals without emergency endoscopy”. This interesting study deserves the following remarks.

This work by Li et al. was not prospective, but we note that most studies in the field of non-invasive EV diagnosis are retrospective, very often in study design and less often in data recording. The team’s definition of HREV was different from that used in the Baveno VI criteria, for example, EVs with clotting were included. This was probably done because EV size can be under evaluated during acute bleeding due especially to hypovolemia. In any case, this aspect likely had very little impact since the EV and HREV prevalences were very close (96.2% and 95.6%, respectively). The most important limitation to the work is likely the selection of patients with cirrhosis. That choice resulted in an EV prevalence of 96% [vs. 86.7% in the previous study (11)]. This implies that a diagnostic study of EVs cannot be legitimately performed. Indeed, by construction, a diagnostic test that increases post-test probability (i.e., a gain better than chance alone) has a positive predictive value (PPV) superior to target prevalence and a negative predictive value (NPV) superior to 1 minus the target prevalence. But the PPV for EV was 98.4%, i.e., a gain of 2.2% (2.3% for relative gain). Likewise, the NPV for EV was 12.5%, i.e., a gain of 8.7% (229% for relative gain). Thus, contrary to the authors’ suggestion, the gain for NPV was superior to that for PPV. In any case, the two figures are not clinically relevant since the gains in PPV and NPV were too low. Finally, the main limit to the work by Li et al. is the too-high EV prevalence, which precluded any legitimate statistical analysis. Curiously, the sources of bleeding were not stated. In recent studies, VB proportions in cirrhotic patients of 63% in 116 patients (12) and 54% in 1,034 patients (6) have been reported. Indeed, in clinical practice, it seems more useful to predict VB than EV in patients with cirrhosis and UGIB, or in any patient with UGIB. Toward that, Rockey, Elliott and Lyles reported fair accuracy for simple tests to diagnose VB in any UGIB (Table 1) but they were unable to differentiate VB from other sources in cirrhotic patients (6). This important information is missing in the study by Li et al. (9).

The missed rate of EV or HREV was 18% in the study by Li et al., corresponding to a sensitivity of 82% for EV or HREV. We congratulate the authors for calculating this correctly. Indeed, there are three ways to calculate the missed VNT rate in the overall field of non-invasive EV diagnosis (13); that based on sensitivity is the most correct and the least optimistic. Nevertheless, a missed EV/HREV rate of 18% is too high. Indeed, the Baveno VI rule fixes the maximum missed VNT threshold at 5% for HREV diagnosis regarding primary prevention. This threshold cannot be higher in VB due to its severity. However, the VB prevalence in the study by Li et al. is unknown, so the calculation for VB or EV in this subgroup was not possible.

Urgent endoscopy has been shown to be an independent predictor of reduced mortality in 571 patients with acute non-variceal UGIB (14). So, even in that setting, as in VB, delaying endoscopy is harmful (4) and every effort should be made to limit it or ensure early drug administration. Other scores have been published to diagnose VB in UGIB (Table 1). The UGIB Etiology Score, based on previous diagnosis of cirrhosis or signs of chronic liver disease, red vomitus, and red nasogastric aspirate, was constructed in a work on 261 patients with UGIB of whom 18% had VB (7). The team behind that score reported 97% NPV and 79% PPV for VB in a validation set. Another study performed in 2,020 patients with UGIB, of whom 10.6% had VB, resulted in a score including five clinical variables and providing an AUROC of 0.91 for VB (8). However, diagnostic indices were not provided for that work. Finally, simple tests remain to be defined for the non-invasive diagnosis of VB among UGIB.

In conclusion, the study from Li et al. elicits different messages: their prediction of EV in UGIB is hampered by methodological limits in selected patients with cirrhosis. Indeed, their study is only a pyrrhic victory due to an excessive EV prevalence. We suggest that the authors assess the Liaoning score (or another simple score) in a population of UGIB of any cause, and then focus on the diagnosis of VB. In that way, several targets can be evaluated together: VB and EV/HREV first in an overall population of acute UGIB and then, optionally, in a subpopulation of CLD or cirrhosis (Table 2). Their merit however is to have developed a simple score, easily and rapidly applicable in clinical practice there where (emergency) endoscopy use is restricted. We look forward to further studies with the adequate target and culprit.

Conflicts of Interest: All authors have completed the ICMJE uniform disclosure form (available at http://dx.doi.org/10.21037/atm.2020.02.78). The authors have no conflicts of interest to declare.