Doctors’ assessment on their own job is largely based on work environment, compensation & benefit and career prospect, and these factors are primarily determined by which hospital doctors are working in. So, among the nationwide hospitals, which can provide more opportunities for career advancement and satisfactory remunerations to doctors and give them a strong sense of personal belonging? With the help of the world’s largest consultancy McKinsey & Company, the medical website dxy.cn carried out the second survey about China’s best employers in the eyes of medical staff. It released the first report of a similar survey last year (see 2011-2012 list of best employers for medical staff).

The survey took three months and received votes from roughly 20,000 members of the website. McKinsey & Company’s participation has helped improve the accuracy and analysis of the questionnaire, and voter turnout doubled from the first survey. Language expressions of the questions have also been bettered. The survey covers six major segments, including quality of medical service, compensation & benefit, personal career outlook and etc., with a total of 24 individual indicators. The simple arithmetic average approach was replaced by more sophisticated weighted average approach to calculate hospitals’ overall scores.

Totally 126 hospitals were shortlisted to qualify the final selection as other hospitals failed to garner at least 30 valid votes from respondents. All of the 126 are top-class hospitals, and eight of them are rated ‘very good’ based on scores of their overall strength. 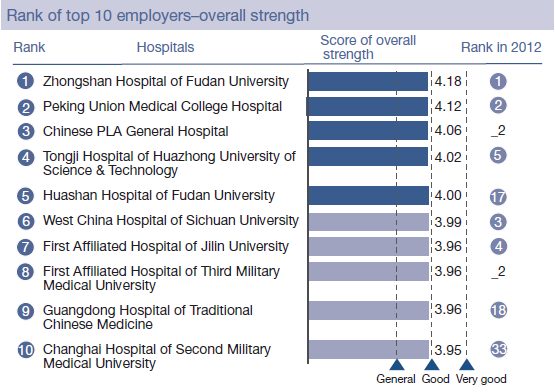 In addition, based on the scores of overall strength, the top 50 best employers are listed as follows. It should be stressed again that only hospitals with 30 or more valid votes are listed (Table 1).

Chongqing and Shanghai hospitals come out on top

We can see from the list that hospitals in Chongqing, Shanghai, and Hubei have relatively higher overall scores. Eleven out of the 126 hospitals are based in Shanghai and near the top of the list, underscoring their powerful overall strength (Figure 2). 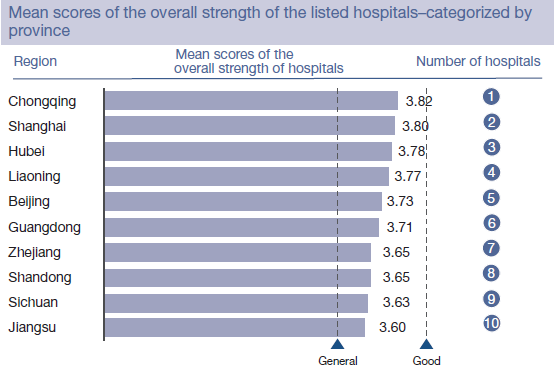 Figure 2 Mean scores of the overall strength of hospitals-categorized by province.

With respect to specific item, Shanghai hospitals were generally rated between ‘good’ and ‘very good’ on infrastructure facilities and service quality, and they came in at the middle of the list in terms of cultural buildup and career prospect, while they underperformed in the categories of work environment and compensation & benefit (Figure 3). 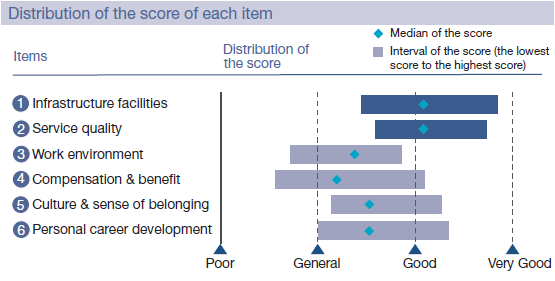 Figure 3 Distribution of the score of each item.

There is an old saying in China that academics, not architecture, make a university prestigious, but that is not totally true for a hospital. Infrastructure facilities indeed have some degree of impact on a hospital’s medical capabilities. Most medical staffs are satisfied with their hospitals’ overall strength, development outlook and medical facilities, but they opined that information buildup is a weak point.

According to the survey outcome, the Chinese PLA General Hospital secured the highest score of 4.77 points (full score is 5 points) on infrastructure facilities, followed by Zhongshan Hospital of Fudan University (4.65) and West China Hospital of Sichuan University (4.58). It’s noteworthy that four of the ten hospitals with the most advanced infrastructure facilities are affiliated to military forces or colleges. The top ten hospitals are listed as follows (Figure 4). 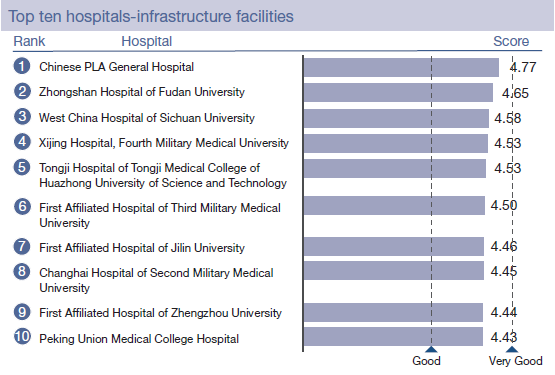 Guangdong Hospital of Traditional Chinese Medicine had the highest score of 4.62 points in the category of service quality, followed by Peking Union Medical College Hospital (4.58) and Zhongshan Hospital Fudan University. The top ten hospitals are listed as follows (Figure 5). 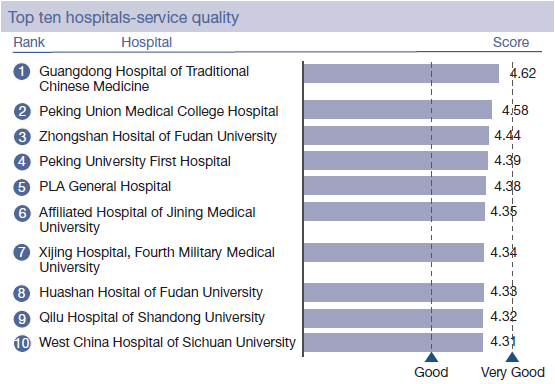 Relationships between patients and medical staff have become increasingly strained in recent years, and work environment is becoming a more important factor over the assessment of a hospital by doctors. In the survey, work environment is measured from four aspects-precautionary measures to protect medical staff’s personal safety, practicing climate and patient-doctor relation, patients’ trust and respect to doctors and work hours & intensity. Survey result indicated doctors appear to be not very worried about their personal safety, their relations with patients and earning trust from them, but they are fretted about the long working hours and high intensity of their job duties. 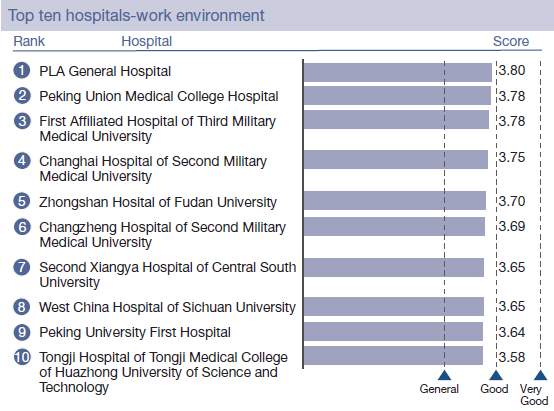 Doctors generally believed their compensation & benefit is roughly at the same level as workers in other sectors or other hospitals. They rated the amount of research rewards and bonus as between ‘general’ and ‘good’, but they were unanimously disappointed by the fact that they sometimes have to work on statutory public holidays. 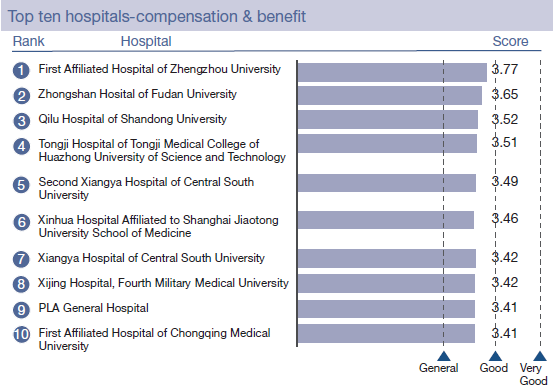 The sense of belonging should be something that every corporate employee hopes to, but in most cases is unable to, enjoy. The doctors scored for this category from four aspects-a hospital’s fairness to treat old and new staff, instructions and assistances from supervisors, work relationship with colleagues, arrangement of various staff activities, and their scores varied from ‘general’ to ‘good’.

Peking Union Medical College Hospital was the best performer in this category, followed by Zhongshan Hospital Fudan University and First University of Peking University. It’s surprising that no military-backed hospitals vaulted into the top ten, although they had a heavy presence in other categories of the list (Figure 8). 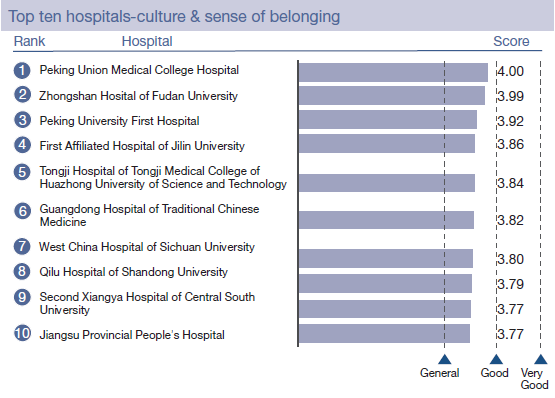 Various academic platforms provided by a hospital are crucial to doctors’ career outlook, and professional title is an important factor for doctors to further advance career development. In this category, doctors scored from four aspects-a hospital’s support for doctors’ further study and training, support for doctors’ attendance of domestic and international academic conferences, fairness and transparency over appraisal of professional title, and a hospital’s attitude toward doctors’ career planning. The survey outcome indicated doctors were generally satisfied with their hospitals’ support for their training and attendance of academic conferences, but less satisfied about professional title appraisal and career planning.

Peking Union Medical College Hospital was once again leading in this category, and Zhongshan Hospital Fudan University and West China Hospital Sichuan University came in at the second and third place. No military hospitals appeared on the top ten list (Figure 9). 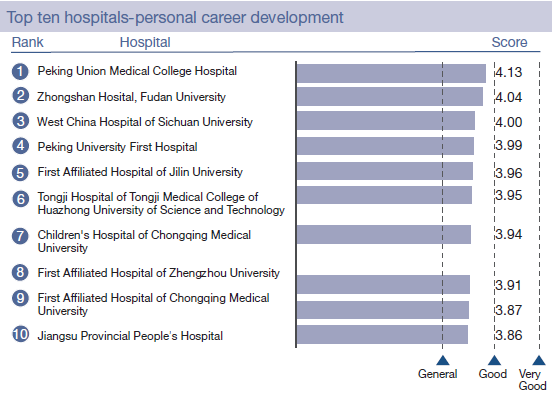 From these lists we can see that hospitals with the highest scores always have a long history of development. They can provide a perfect platform for doctors’ career advancement, and give them a strong sense of belonging, decent salary and favorable work climate. With these conditions well-educated doctors can make a good living with dignity, something that is not easy to get at the current society. Compiling a ranking list of hospitals is just a means to help doctors choose an appropriate job platform and encourage hospital managers to make their hospitals the top choice of workplace for medical staff.