Pulmonary transplantation (LTx) is a viable treatment option for patients with final stage lung disease such as cystic fibrosis (CF), chronic obstructive pulmonary disease (COPD) and interstitial lung disease (1,2). Advances in surgical techniques, pre- and post-operative management have improved overall survival of lung-transplanted patients over the past decades. Despite these developments, lung transplantation has still significantly higher morbidity and mortality than transplants of other solid organs such as kidney and liver. For these reasons, several studies have been conducted to investigate factors that potentially affect the prognosis of patients who undergo LTx (3).

Nutritional assessment plays a crucial role in recipient evaluation. Heterogeneous clinical features characterize LTx candidates from a nutritional point of view. In most cases, young patients with CF have pancreatic insufficiency leading to malabsorption and extreme thinness; on the contrary, patients with pulmonary fibrosis are older, with long smoking history and usually they are overweight or obese. This heterogeneity, as well as comorbidities, influence nutritional requirements and outcome of LTx patients.

In this context, we read with great interest the article by Lu et al. (4) “Can the preoperative nutritional risk score be a predictor of outcomes in critically ill patients of lung transplantation: a retrospective study”. The authors performed a single center, retrospective observational cohort study of 42 patients who underwent LTx and evaluated the role of nutritional assessment. Indices applied to characterize the nutritional status were nutritional risk screening (NRS-2002) and prognostic nutritional index (PNI) (5). The Authors concluded that PNI and NRS2002 were not independent predictors for post-operative mortality; on the contrary, ECMO assistance was the only independent predictor for increased mortality in their cohort.

Lung transplant’s literature is rather conflicting on this topic. In a meta-analysis including seven papers, Upala and coauthors found a significant risk of mortality after LTx in candidates with underweight and obesity (6). This meta-analysis also denied any significant risk of primary graft dysfunction in obese and overweight candidates. On the other hand, Singer and coauthors came to more articulated conclusions. Using multivariable-adjusted regression models in 9,073 patients who underwent LTx in the United States, Singer found that a body mass index (BMI) of 30–34 kg/m2 was not associated with 1-year mortality, but BMI >35 was related with a large increase in mortality (7). In the same paper, Singer reported a multicenter prospective cohort study aimed to correlate plasma leptin and mortality in 599 LTx patients. This second part of the paper found a doubtful correlation between high preoperative leptin level and 1-year mortality rates among patients who did not required cardiopulmonary by-pass during surgery. Singer speculated that higher preoperative plasma leptin levels was a better marker of increased adiposity than BMI and consequently leptin could better correlate with increased 1-year mortality after LTx.

Actually, obesity is a state of positive energy balance characterized by low-grade inflammation and weakened innate and adaptive immune responses; adipose tissue produces free fatty acid and activates pro-inflammatory serine kinase cascades (8). In a recent meta-analysis, the authors observed that the correlation between leptin and inflammatory biomarkers was stronger in young individuals but decreased with age (9). The age-dependent change in body fat distribution led the authors to attribute that finding to the shift of fat accumulation from subcutaneous to visceral areas. Conversely, this meta-analysis found an inverse correlation between adiponectin (an adipose tissue-derived hormone) and biomarkers of immunity and inflammation (C-reactive protein, interleukin-6, and tumor necrosis factor-α). Actually, additional studies are necessary to better understand the complex role of “adiposity” in LTx.

CF deserves some special considerations. There is a known association between the CF and malnutrition, which is partly the result of a combination of lower energy intake, higher turnover of essential fatty acids and higher energy consumption due to frequent pulmonary infections. In addition, patients with CF suffer from pancreatic insufficiency and CF-related diabetes that causes malabsorption (10). Recently, Ashkenazi and colleagues conducted a retrospective study that included patients with CF treated at the Sheba Medical Center and followed up for 10 years (11). The authors found a statistically significant correlation between BMI at the age of 10 and FEV1 at the age of 20 years; in additions, the multivariate analysis indicated low BMI as a determinant for future lung transplantation. A little retrospective study conducted in the same institution concluded that improvement in BMI could have a positive influence on patient’s survival after LTx (12). Recently, researchers from Vienna published a prospective study on 58 CF patients who received LTx; this study found that more than one-quarter of the cohort had a BMI <18.5 kg/m2 (13). Malnourished patients had lower pulmonary function versus normal or overweight individuals. In addition, the pulmonary function decreased over time in patient with low BMI. 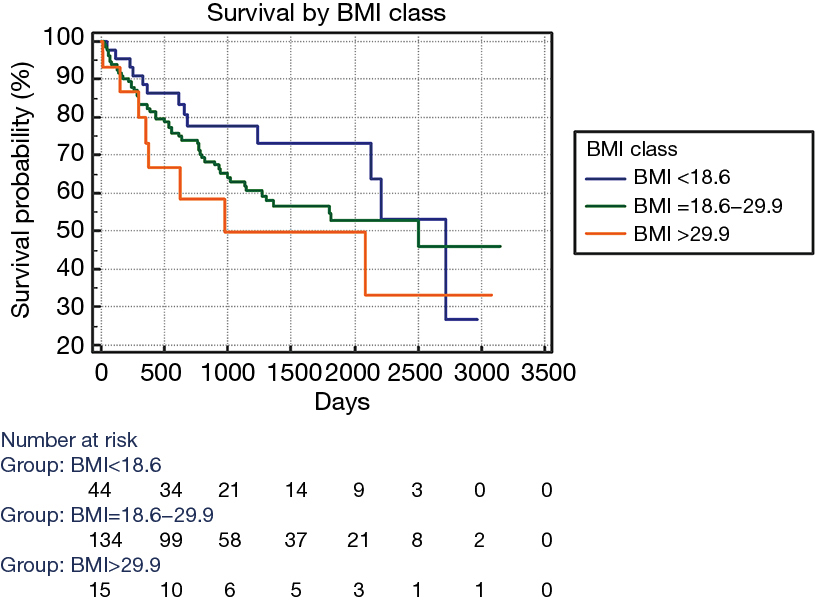 In conclusion, the paper by the Wuxi researchers raised attention to the problem of weight disorders in lung recipients but much remains to be studied to correctly understand the real impact of this important feature on survival.