The passive leg raising under pressure: focus on the impact of intra-abdominal hypertension

The prediction of fluid responsiveness (FR) is a crucial part of the algorithm in ICU management as fluid expansion is the corner stone between the first-line treatment of acute circulatory failure and fluid overload (1). Passive leg raising (PLR) is a dynamic diagnostic tool of FR. It can even be considered as a reversible fluid challenge. It is especially recommended when the other usual dynamic indices based on the respiratory variations of the left ventricular (LV) stroke volume are not reliable because of atrial fibrillation (2), spontaneously breath (3) or patients are mechanically ventilated with a very low tidal volume (4). In a prospective observational study including 2,213 patients worldwide who received fluid expansion, dynamic indices of FR were used in 22% of patients for clinical decision, among which PLR accounted for 50% of cases (5). Overall, PLR was then performed in 10% of all patients (5). A recently published study highlighted the potential limitation of PLR in case of intra-abdominal hypertension (IAH) (6). As IAH is a frequently encountered situation in the ICU (7), this gives us the opportunity to remind and discuss the essential points regarding PLR (Table 1). 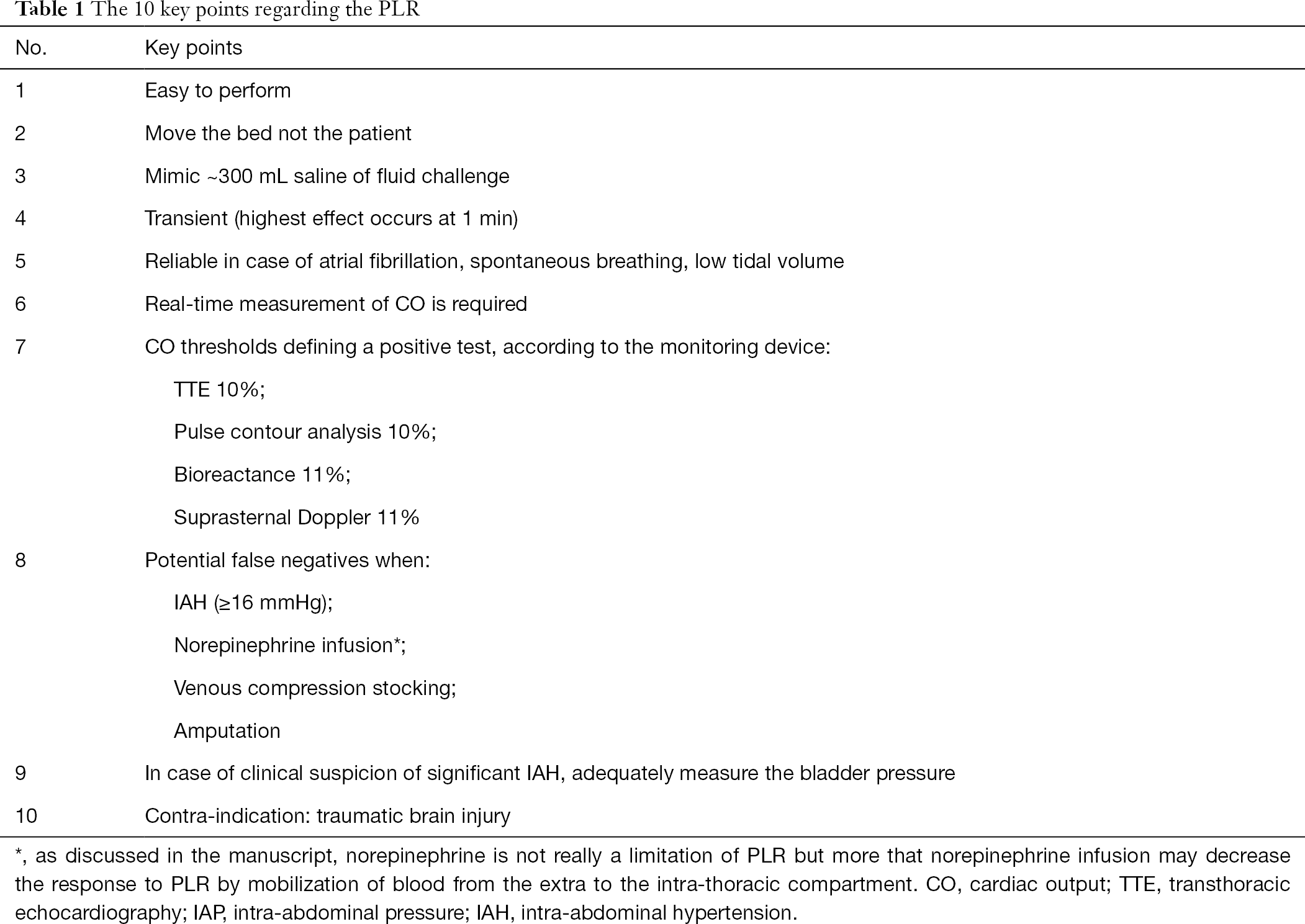 Table 1 The 10 key points regarding the PLR
Full table

Interest and value of PLR

To target the “true” hypovolemic patients (i.e., patients without enough blood into the chest and the heart) and not all the fluid-responsive patients has emerged as a new paradigm for a couple of years (8). The intra-thoracic amount of blood usually accounts for about 17% of the volemia, 9% being in the pulmonary circulation and 8% in the heart in diastole (9). As a matter of fact, PLR is able to detect hypovolemia whatever its mechanism. A relative hypovolemia, which is a misdistribution of a normal intra-vascular blood volume between intra-thoracic and extra-thoracic compartments due to venous vasoplegia leading to decrease in mean systemic filling pressure (MSFP), may be detected by PLR (positive test) and partially corrected by the infusion of norepinephrine (less positive test) (10). An absolute hypovolemia, i.e., not enough blood into the intravascular system, is obviously also detected by PLR and corrected by giving more fluids (11). The effect of PLR is to reversibly move blood into the right heart when it is possible. In the past, Caille et al. reported in 40 mechanically ventilated patients with shock that PLR was able to decrease the collapsibility index of the superior vena cava (SVC) and to increase the cardiac output (CO) and the LV end-diastolic volume in patients with significant SVC collapsibility at baseline (12). SVC collapsibility is known to be an accurate reflect of the adequacy between the volume of blood into the chest and into the heart according to the level of intrathoracic pressure induced by tidal volume (13). The best accuracy of the PLR test is obtained by monitoring CO and not the systemic blood pressure. The threshold above which the test is considered positive usually depends on the monitoring devices used for CO measurement and their respective variability in measurement. In a systematic review and meta-analysis performed in 21 studies and 991 adult patients, Monnet et al. reported the following thresholds: 10% for transthoracic echography, 10% for pulse contour analysis and 11% for bioreactance and suprasternal Doppler (14). It has to be reemphasized that accuracy of PLR is poor when its effect is only assessed by changes in systemic blood pressure (15,16).

Another interest of PLR is that it allows physicians to mimic fluid expansion in clinical research in unselected patients, including those with a potential contra-indication to fluids, avoiding any bias in studies aiming to evaluate the value of some hemodynamic indices to predict FR. Thanks to this approach, Vignon et al. reported the respective value of different indices in 540 mechanically ventilated patients with circulatory failure, in whom 18% had a cardiogenic shock and 22% an ARDS (17), both conditions that could preclude any fluid expansion. The conclusion was that thresholds and values of most indices were much lower than initially reported in small studies performed in selected population.

The PLR method in practice

Practically, the patient stands first in a semi-recumbent position and is then moved into a PLR position by moving the bed only and not the patient himself to avoid sympathetic stimulation. In this position the trunk is lying supine and the legs are raised to 45°. The legs volume is then “injected” into the inferior cava circulation as well as the splanchnic volume into the portal circulation by the hydrostatic pressure. It has also been suggested that PLR could act by increasing the MSFP and then the pressure gradient for venous return (18,19). However, it is not so clear how and why it could occur, as PLR is expected neither to modify the content (volemia) nor the container (tone of the venous circulation), both driving MSFP. Moreover, if so, it would be in opposition with the effect of norepinephrine infusion that increases MSFP but decreases the positive hemodynamic effect of PLR (10).

When adequately performed in a fluid-responsive patient, an increase in right heart preload mimics a fluid expansion of around 300 mL of saline (20). Because the highest effect appears during the first minute and is transient, it is recommended to use a monitoring device allowing a real-time measurement of CO (21). In this way, thermodilution techniques are inadequate for such a test.

Usual limits of PLR include situations where there is a decrease in the available blood volume due to venous compression stocking or amputation for instance. Traumatic brain injury is a contra-indication of PLR. Besides these easily-identified situations, IAH is probably the most important issue because such a situation is more and more frequent in the critically ill patients. In an old multicenter prospective single-day study including a mix of medical and surgical patients, half of them had IAH defined by a bladder pressure at least once ≥12 mmHg during the observational period (7). The only reported risk factor was the body mass index (7), while PEEP only slightly affects the intra-abdominal pressure (IAP) (22). Before the recent study by Beurton et al. (6), Mahjoub et al. already suggested the negative impact of IAH on PLR value. In 41 selected patients having a pulse pressure variation greater than 12%, an IAP ≥16 mmHg was the only one factor associated with false negative of PLR (negative test but positive hemodynamic response to fluid expansion) (23). As a matter of fact, in animals with an IAP >15 mmHg, the more IAP increase, the more heart volume and CO decrease (24,25). Briefly, several explanations may be discussed. When IAP rises, the mechanical compression of portal vein and inferior vena cava increases the venous resistance, the available splanchnic blood decreases and the right atrial pressure (RAP) increases, which may limit the venous return induced by PLR. Interestingly, we recently reported in a large cohort of mechanically ventilated patients that patients with an IAP ≥12 mmHg (30% of the cohort) had a less pronounced relationship between FR and end-expiratory diameter of the inferior vena cava (26). In their study, Beurton et al. prospectively included 30 mechanically ventilated patients with a potential indication for fluid expansion, some with IAH (IAP ≥12 mmHg) and others without IAH (6). Several results are interesting to discuss. First, 70% of the patients were responders to fluid expansion in the IAH group compared to 50% in the non-IAH group, the difference being non-statistically significant. Second, IAP decreased by more than 20% during PLR in both groups. Third, the increase in CO in fluid-responsive patients was similar in both groups after fluid expansion. Fourth, the area under the receiver-operating curve (AUROC) of PLR to predict the fluid-responsiveness was much lower in the IAH group compared to the non-IAH group (0.60±0.11 vs. 0.98±0.02). As expected, PLR increased CO in a more marked way in fluid-responsive patients without than with IAH (>20% vs. ~10% increase). This is probably especially true when the inferior vena cava is in zone 3 condition, meaning that pressure into the inferior vena cava remains higher than intra-abdominal pressure (27). These results are really provocative as they suggest that in many cases, PLR could not be accurate to predict the response to fluids or that a systematic measurement of bladder pressure should be performed for an adequate interpretation. However, few arguments may soften this message. The same team expert in the field reported a very high value of PLR (AUROC close to 1) (14), and it is very likely—even though not reported—that around half of the patients included in the meta-analysis had an IAP ≥12 mmHg (according to its incidence). Moreover, even if the mean value of IAP is not given in the IAH group, we suspect that this value was much higher than 12 mmHg, as 43% of patients had a value higher than 20 mmHg, 27% between 16 and 20 mmHg and 17% of patients had an abdominal compartment syndrome (6). IAP was then very likely close to the threshold of 16 mmHg initially suggested by Mahjoub et al. (23). Finally, in the large study by Vignon et al. who used PLR like a fluid loading to evaluate the value of different parameters of FR, results were very similar in the 84 patients with a sinus rhythm, a tidal volume ≥8 mL/kg and an intra-abdominal pressure <12 mmHg compared to the other patients (17).

In conclusion, the PLR appears to be an accurate technique to predict fluid-responsiveness when adequately performed. Moreover, it is a reversible fluid challenge. Patients may hemodynamically respond positively or negatively according to their hemodynamic status exactly like they will respond after a fluid expansion. Physicians should be aware that IAH could be a limitation for high values of intra-abdominal pressure close to 16 mmHg.

Conflicts of Interest: All authors have completed the ICMJE uniform disclosure form (available at http://dx.doi.org/10.21037/atm.2019.12.139). The series “Hemodynamic Monitoring in Critically Ill Patients” was commissioned by the editorial office without any funding or sponsorship. AVB serves as an unpaid editorial board member of Annals of Translational Medicine from Jan 2020 to Dec 2021. The other authors have no other conflicts of interest to declare.