Immune checkpoint inhibitors (ICI) have had significant impact on the treatment of metastatic lung cancer patients with initial pivotal studies showing survival benefit in second line setting favoring ICI use compared to chemotherapy (1-4). Subsequently, ICI has shown a benefit in first line setting with single agent pembrolizumab (5) or in combination with chemotherapy based on PD-L1 expression results (6-9).

The incidence of lung cancer is strongly related to age and it is estimated that about 60.4% of newly diagnosed lung cancer patients are 65 years and older (10). Paradoxically, elderly patients are often underrepresented in trials despite the high prevalence of malignancies (11). A recent survey on health-related quality of life in elderly patients with cancer incorporated pooled data from 25 EORTC trials involving more than 6,000 patients identified that only 9% of the trial population were above 70 years of age (12). In addition, fit elderly patients in trials may not represent the general elderly population who are often associated with multiple comorbidities and impaired functional status.

The field of geriatric oncology was developed as there are fundamentally biological and physiological differences between elderly cancer patients and their younger counterparts (11,12). Some of the many physiological changes that distinguish the elderly from the young include: decline in blood flow to the liver, decreased renal clearance and immunosenescence. The decline of blood flow and the reduction of first pass metabolism by the liver can lead to changes in the pharmacokinetics of the cancer drugs (11). Decreased renal clearance due to an age-related decline in renal mass and glomerular filtration rate can affect the clearance of the cancer drugs (11). Immunosenescence which occurs with ageing, is the result of an imbalance between the inflammatory and anti-inflammatory mechanisms leading to a proinflammatory profile causing immune dysregulation (13-15).

In the era of immunotherapy, there are currently no dedicated phase 3 trials on elderly patients to investigate the benefit of immunotherapy. Hence, current evidence is based on subgroup analysis of a few phase 3 trials as shown in Table 1. In a recent journal issue, Nosaki and colleagues (16) report a pooled analysis based on three keynote trials, mainly Keynote 010 (1), Keynote 024 (5) and Keynote 042 (9). Keynote 010 was a phase 2/3 randomized controlled trial of pembrolizumab at 2 and 10 mg/kg dosages vs. docetaxel in previously treated patients with advanced non-small cell lung cancer (NSCLC) with a PD-L1 expression of at least 1%. Primary endpoints were overall survival (OS) and progression free survival (PFS) both in the total population and in patients with PD-L1 expression of at least 50% of tumour cells. The trial showed that pembrolizumab in both dosages of 2 and 10 mg improved OS as compared to docetaxel with a HR, 0.71 (95% CI: 0.58–0.88) and HR, 0.61 (95% CI: 0.49–0.75) respectively. There was no significant difference in PFS between pembrolizumab and docetaxel. Grade 3-5 treatment related adverse events (TRAEs) were less common with pembrolizumab 2 and 10 mg/kg as compared to docetaxel at 13% and 16% as compared to 35% respectively. The authors concluded that Keynote 010 confirmed the efficacy and safety of pembrolizumab in previously treated patients with NSCLC and the data supports the 2 mg/kg dosing given similar outcomes between the two dosages of pembrolizumab. 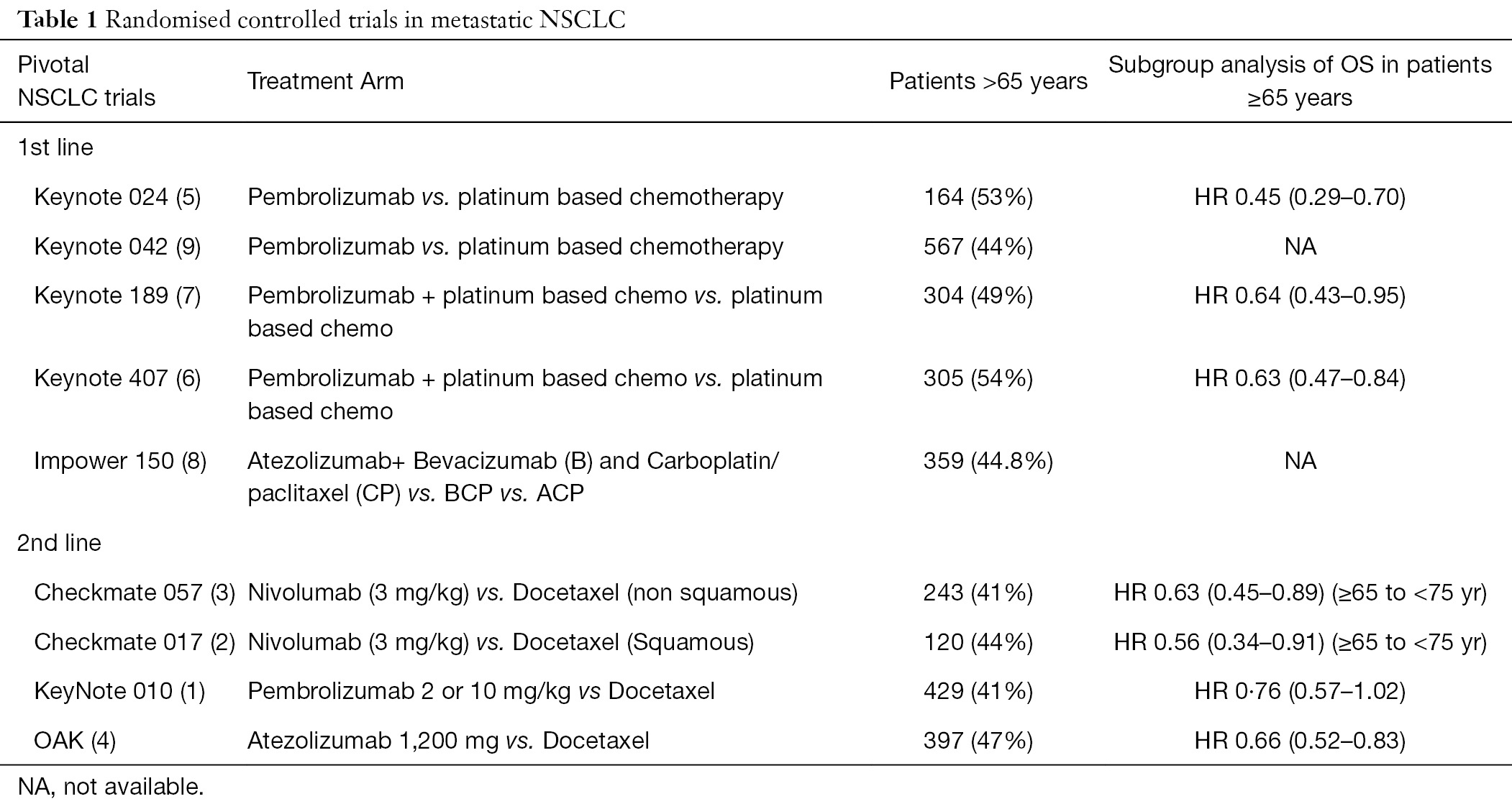 Several conclusions can be made from both the pooled analysis that investigated the efficacy and safety of ICI in elderly patients aged 75 years and older. Firstly, there is an ongoing difficulty in recruiting patients greater than 75 years old despite having more than 40% of the total trial population to be 65 years or greater. This could be the inherent nature of the elderly population above 75 years that often have multiple co-morbidities and poorer functional status and thus they are not eligible for the stringent trial requirements. Secondly, based on the current pooled analysis, Nosaki and colleagues (17) have provided us with the best evidence to date, to offer treatment to elderly patients who are 75 years and above and fit with an ECOG performance status 0-1. However, extrapolating the results from this study onto the general population of elderly patients needs to be taken with a pinch of salt as real-world elderly patients are often heterogenous and are associated with significant comorbidities and impaired functional status (15).

As such, data from phase 3B/4 trials like Checkmate 153 and real-world data may provide a more realistic assessment of treatment benefit and safety in this group of patients. Checkmate 153 (21) is a phase 3B/4 study of monotherapy nivolumab on previously treated patients with advanced NSCLC. In this study, which has been described to closely reflect the real-world setting, 1,426 patients were recruited of which 556 (39%) were of advanced age of 70 years and above and 128 (9%) had an ECOG PS of 2. Among the patients aged 70 and above, 330 (59%) had nivolumab as third or later lines similar to the overall population. Median OS across the population was 9.1 months (95% CI: 8.3–10.4) while in patients aged 70 and above, median OS was 10.3 months (95% CI: 8.3–11.5). Both the overall study population and patients aged 70 years and greater had similar 1-year OS at 43% and 44% and 2-year OS rates at 26% and 25% respectively. This is in contrast to patients with ECOG PS of 2 who had a poorer median OS of 4.0 months (95% CI: 3.1–6.2), with 1 and 2-year OS rates of 24% and 9% respectively. Reported incidence of grade 3–4 TRAE in the overall population, patients aged 70 years and above and ECOG PS of 2 were at similar rates of 6%, 6% and 9% respectively. The most common grade 3–4 TRAE in the overall study population and patients aged 70 and greater was fatigue at 2% and 4% respectively. In patients with ECOG PS 2, diarrhea and raised alkaline phosphatase levels were the highest grade 3–4 TRAE at 2% individually. Quality of life measures were also included in Checkmate 153. It showed that the patients’ quality of life as measured by European Quality of life-5 dimension (EQ-5D) and the lung cancer symptom scale (LCSS) had improved from baseline over the course of treatment with nivolumab. Importantly, in patients who continued to receive treatment, the QOL scores continued to increase close to that of the general population. This improvement was also noted in patients aged ≥70 years while on Nivolumab. In patients with ECOG PS 2, although there was a lower quality of life with a greater symptomatic burden at baseline, improvements in quality of life and decreasing symptoms were noted while undergoing nivolumab treatment.

Khozin et al. (22) recently published a retrospective real-world study based on the US electronic health record data in community cancer clinics in the years following US approval for anti PD-L1 treatment in NSCLC. It showed that out of 1,344 patients, 365 (27.2%) were aged 75 years and older. Six hundred and sixty-nine (49.8%) patients were treated with PD-1 inhibitors in the second line setting. The estimated median OS was 8.0 (6.4–9.5) months and neither age at PDL-1 initiation nor stratification by lines of therapy appear to influence OS. Steward and colleagues (23) also published a pilot study to explore the potential use of real-world end points extracted from data from diverse health care data organisations. It included 13,639 patients initiated on PD-L1 inhibitors where 4,047 (29.6%) patients were 75 years and above. In this study, the majority of the patients had anti PD-L1 as a second line treatment. The median OS based on patients aged more than 75 years old ranged from 6.83 to 13.22 months according to the six different datasets.

These findings along with Checkmate 153 showed that efficacy of ICI in the general elderly population seems to be similar to that of the young. Importantly, in elderly patients who had a baseline ECOG PS of 2, where a poor PS is a poor prognostic factor regardless of treatment, the current limited evidence (24) suggests an improvement in quality of life scores with a favourable safety profile. We currently await the results of several ongoing studies like the phase 3 ELDERLY study as well as the phase 4 EPITOP-01 study that would provide further insight into the efficacy and safety in the treatment of ICI in the elderly patients with NSCLC.