This figure is higher in patients initially treated with non-invasive ventilation or with standard conventional oxygen, in particular in those with a PaO2/FIO2 below 200 (4,5). These patients are obviously at high risk of desaturation during the procedure.

Timing and decision of intubation

In addition to initial level of hypoxemia, timing of intubation is a key feature to consider when discussing hazards of intubation and how to avoid them (6). Interestingly, data in the literature suggests that optimal timing may differ depending on the patient’s primary diagnosis. In the case of acute hypoxemic respiratory failure, studies have found that unduly delaying intubation worsens patients’ outcome (7). Conversely, in septic shock, a post-hoc analysis of the Sepsispam study found that practices regarding intubation affected patient outcome (8). Those ICUs with the highest rate of early intubation had a greater proportion of mortality in comparison to ICUs with middle rate of early intubation. Those ICUs with the lowest rate of early intubation had a non-significant increased mortality. Because intubation of septic patients may be prompted by either hemodynamic, respiratory or neurologic reasons, and because sepsis often originates from pneumonia, it is difficult to draw any firm conclusion from this post-hoc analysis, but taken together, data clearly indicates that late is not desirable, but early may also be associated with worse outcome. Hence, appropriate timing of intubation during high flow therapy is a daily challenge. Predicting which patients will fail and require intubation is hazardous and determining optimal time to intubate not always easy. Recently, we developed an index to help predict outcome of patients receiving HFNC. The ROX index (which is defined by the ratio of SpO2 over FiO2, divided by respiratory rate) has its best accuracy to identify which patients will succeed and which will fail under HFNC when it is calculated at 12 h after the start of HFNC therapy (2,3). Importantly, the dynamics of changes of the ROX are also discriminative, hence the index can be calculated over time, and an increasing ROX is associated with a better outcome than a decreasing one (3).

Preoxygenation in the ICU with HFNC or standard oxygen: analysis of the available data

Because an increasing number of patients with acute hypoxemic respiratory failure are treated with HFNC, those that ultimately require intubation will already have the device in place to perform preoxygenation.

To date, preoxygenation and apneic oxygenation during the intubation process of critically patients with HFNC was evaluated in one before-after study (9) and four RCTs (10-13) (Table 1). Very similar outcomes (lowest SpO2 and number of SpO2 below 80%), similar HFNC settings (50–60 L/min and 100% FiO2) were used in these five studies. Similarly, the comparator was mostly standard bag-valve mask oxygenation in these studies with the exception of one for which the comparator was NIV. 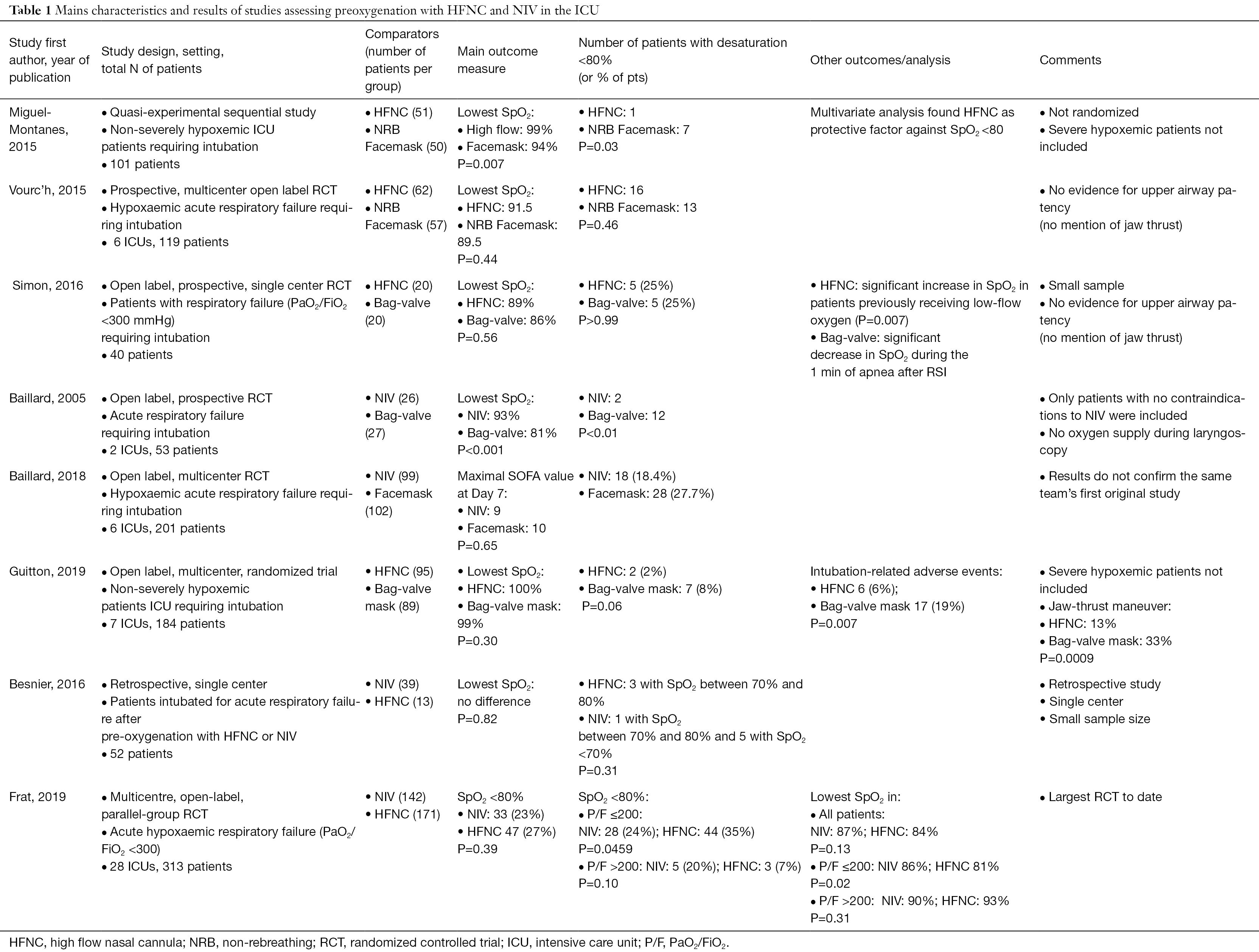 Taken together, none of these studies found a worse outcome with HFNC and some a significant improvement.

Despite these results, some are still reluctant to use high flow instead of standard oxygen (14).

This may seem intriguing.

No study ever demonstrated a better outcome of ARDS patients ventilated with a Dräger V500 ventilator compared to a Siemens Servo C. Had one the choice however, I am confident no one would hesitate today between the two when choosing a ventilator to manage an ARDS patient.

A significant technological gap separates the two, with better performances and new features in favour of the most recent one.

Isn’t the situation similar between standard oxygen and HFNC?

If so, why do would we require HFNC to demonstrate better outcomes?

The same analogy applies to administration of vasopressors in septic shock. Who would nowadays administer vasopressors diluted in a pouch of saline and adjusting the flow with a simple manual flow regulator rather than via a precision syringe pump? Teams readily accepted this technological improvement without requiring a study demonstrating a survival difference between the two devices used in septic shock patients.

Preoxygenation in the ICU with HFNC or standard oxygen: what this new study adds

Intubation of hypoxemic patients is a hazardous procedure and complications may be fatal (15). Should our concern not be the patients’ utmost safety? Most studies have focused on desaturation as primary outcome, because severer hypoxemia is frequent and may lead to cardiac arrest during intubation; however, other complications need also to be addressed.

Recently, Guitton and colleagues compared HFNC to standard bag-valve mask to preoxygenate patients with mild to moderate hypoxemia requiring tracheal intubation (12). The study was a multicentre, open-label, randomized controlled trial. HFNC was set at 60 L/min and preoxygenation oxygen flow was 15 L/min in the standard group. One hundred and eighty-four patients were enrolled.

The median lowest SpO2 during intubation was not significantly different between the two groups, despite a greater incidence of difficult intubations in the HFNC group.

Similarly, fewer patients in the HFNC group experienced drops in SpO2: 12% vs. 23% in the standard oxygen group. Overall, a significant higher incidence of severe adverse events was observed in the standard oxygen group compared to the HFNC group. This was also the case for the moderate complications. This was coherent with the results of the multivariate analysis that evidenced an association between HFNC and less episodes of desaturation below 90% and less intubation-related complications.

Preoxygenation in the ICU: does NIV perform better?

A landmark study by Baillard and colleagues indicated the superiority of NIV over standard oxygen to prevent severe desaturation episodes (SpO2 <80%) (16). However, in a subsequent study, the same authors failed to show any benefits of NIV as a preoxygenation method to reduce organ dysfunction compared with usual preoxygenation in hypoxemic, critically ill patients requiring tracheal intubation (17).

We recently conducted a randomized multicentre control trial that compared NIV to HFNC to ensure preoxygenation of patients with acute hypoxemic respiratory failure requiring tracheal intubation in the ICU (13). If there was no difference in the incidence of severe hypoxaemia (23% with NIV vs. 27% with HFNC) in the overall study patients, we found that patients with moderate-to-severe hypoxaemia (PaO2/FiO2 ≤200 mmHg), severe hypoxaemia occurred less frequently after preoxygenation with NIV than with nasal high-flow (24% vs. 35% respectively, P=0.0459). Importantly, serious adverse events did not differ between the two groups.

Hence, although there does seem to exist a benefit in using NIV in the more severe patients, this benefit is small, and is not found for serious adverse events other than desaturation.

Concluding remarks: our patients’ safety above all

Regarding desaturation, it is insightful to look at individual patient data. A quick look at Figure 2 of Guitton and colleagues’ study shows that 4 patients in the standard oxygen group experienced desaturation below 50% (versus none in the HFNC group)! Obviously, figures are much too small for any valid statistical analysis, but in an individual patient safety perspective, these four patients were at great risk for potentially fatal cardiac arrest. Interestingly, similar very profound desaturations were observed by Besnier et al. in patients preoxygenated with NIV but none with HFNC, despite the absence of difference in median lowest SpO2 values between the two devices (18).

Based on these results, we suggest in Figure 1, our practical approach on preoxygenation and apneic oxygenation during intubation of ICU patients.

Figure 1 Algorithm of intubation in ICU. The choice of the preoxygenation method is based on the device the patient is supported with at the time of intubation decision. 1, using the MACOCHA scale; 2, except in case of left heart failure or cardiogenic pulmonary. NIV, noninvasive ventilation; HFNC, high-flow nasal cannula oxygen support; RSI, rapid sequence induction.

It is our responsibility as intensivist we take all the necessary precautions so that none of our patients ever experience such desaturations. Data, including the important study by Guitton et al. (12), shows this is be better achieved with HFNC than with conventional preoxygenation.