Metastatic colorectal cancer (CRC) is now being better understood as a collection of diseases with each distinguished by distinct molecular profiles. BRAF mutant cancers are an important CRC subtype composing about 10% of metastatic CRCs. Of those with a mutation in the BRAF gene, 80% possess the V600E mutation (1). This alteration results in a constitutively active kinase which activates the downstream MEK/ERK signaling pathway. BRAFV600 mutant cancers are more commonly on the right side of the colon and have a higher prevalence in women (2). These cancers have a preponderance for extensive nodal disease, peritoneal disease, and a very poor prognosis, with a median survival for patients with BRAFV600 mutant metastatic CRC of less than 2 years (3-5).

BRAFV600 mutations are associated with relative chemotherapy resistance and rapid progression in the setting of chemotherapy resistance. For patients with appropriate performance status, combination cytotoxic chemotherapy remains the consensus standard of care. FOLFOX and FOLFIRI regimens are commonly utilized (6). BRAF mutations are associated with a lack of survival benefit from the anti-epidermal growth factor receptor (EGFR) inhibitors, cetuximab and panitumumab (5,7-9), but BRAF mutant cancers can still benefit from bevacizumab (10). Given the poor prognosis and decreased performance status, many patients with BRAF mutant CRC are not candidates for second-line therapy. This has led to interest in using FOLFOXIRI and bevacizumab in the first-line setting. The TRIBE study investigated this regimen in a post-hoc analysis of small cohort (n=28) of patients demonstrating an improvement in overall survival from 10.7 to 19 months when compared to FOLFIRI and bevacizumab, although not statistically significant with hazard ratio (HR) 0.54 (0.24, 1.20) (4).

In contrast to BRAF mutant melanoma, BRAF mutant CRCs are largely resistant to single agent BRAF targeted therapies (11-13). Preclinical studies have revealed feedback signaling results in increased EGFR signaling mediated downstream by direct activation of CRAF or by the transactivation of BRAF-CRAF heterodimers (14). This has led to combination EGFR and BRAF inhibitor regimens with improved response rates (15-17). The combination of vemurafenib, cetuximab and irinotecan demonstrated a response rate (RR) of 16% versus 0% with standard chemotherapy and an improvement in median progression free survival (PFS) of 4.4 versus 2.0 months (HR 0.42, P<0.001) in patients with treatment refractory metastatic BRAFV600 mutant CRC (18). Most recently triplet combinations targeting EGFR, BRAF, and MEK have been investigated to enhance the efficacy of this treatment strategy (16,19) (Table 1). 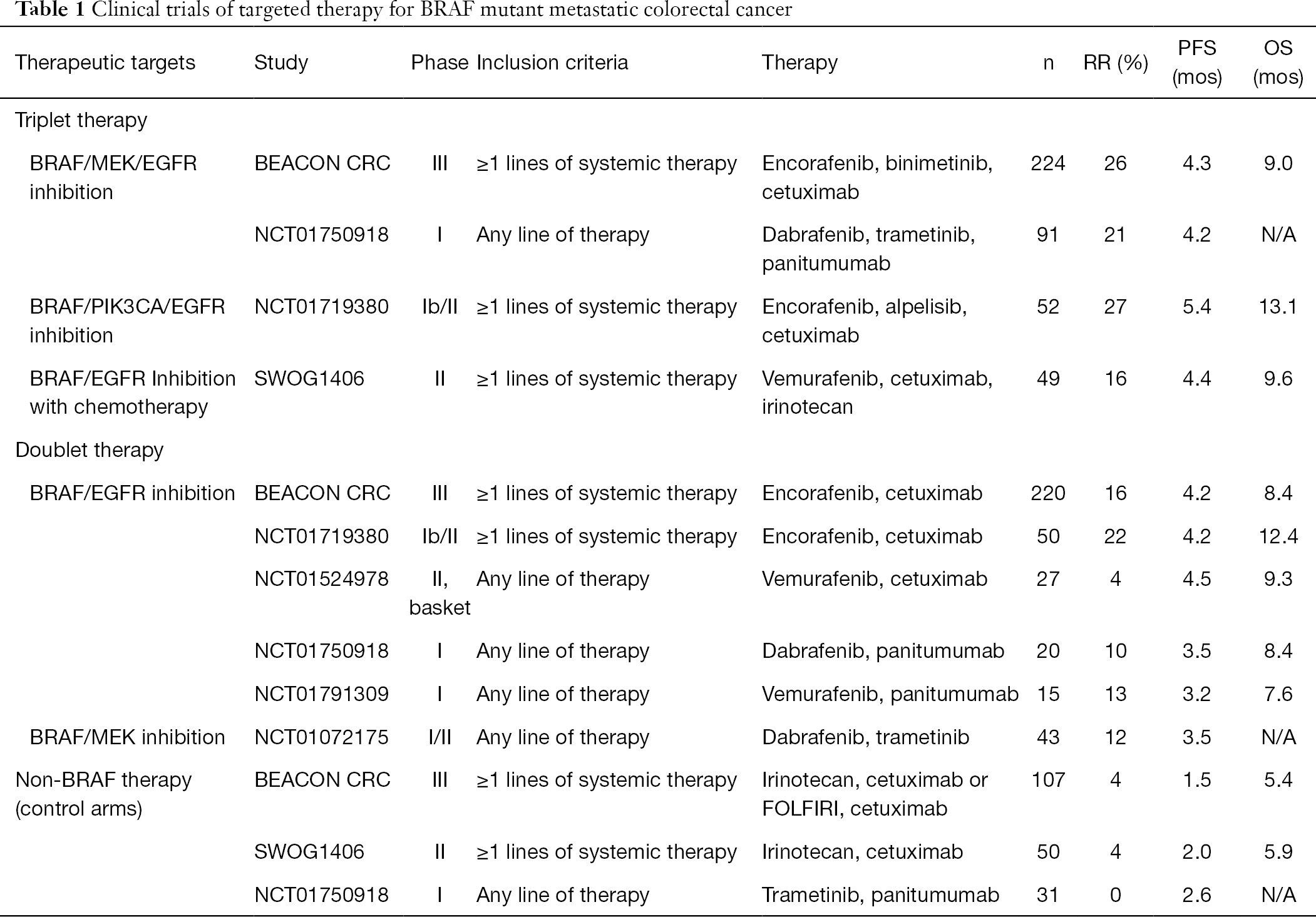 Dr. Van Cutsem, et al., published the results of the safety lead in of the phase III BEACON Colorectal Cancer Study examining the combination of binimetinib, encorafenib and cetuximab (19). This manuscript detailed the results of the first 30 patients enrolled in this clinical trial examining the use of this regimen for patients with BRAFV600E mutant metastatic CRC in the treatment refractory setting. The primary endpoint of the safety lead-in was to determine the safety and tolerability of this triplet regimen dosed at encorafenib 300 mg every day, binimetinib 45 mg twice a day and cetuximab 400 mg/m2 followed by 250 mg/m2 intravenously weekly in 28-day cycles. Dose limiting toxicities were observed in 5 of the 30 patients, including serous retinopathy, reversible decreased left ventricular ejection fraction, and cetuximab-related infusion reactions. The most common grade 3/4 adverse events included fatigue, anemia, increased creatine phosphokinase, increased AST, and urinary tract infections. Overall, this regimen was deemed tolerable. Interestingly, diarrhea and acneiform rash were less severe than reported prior studies of MEK and EGFR inhibition alone (16,20). Preliminary clinical efficacy was also evaluated in this cohort of patients identifying a RR of 48% and median PFS of 8.0 months.

Most recently, the prespecified interim analysis of the Phase III BEACON Colorectal Cancer Study was reported (21). This trial enrolled 665 patients with BRAFV600E evenly across three cohorts, including the triplet regimen of encorafenib, binimetinib and cetuximab; the doublet regimen of encorafenib and cetuximab; and a control cohort where patients could receive either cetuximab and irinotecan or cetuximab with FOLFIRI (folinic acid, 5-fluorouracil, and irinotecan). The primary endpoints were overall survival (OS) and RR between the triplet regimen and the control group. The statistical analysis plan was not designed to compare the triplet and doublet regimens. The three cohorts were similar at baseline with the majority of patients being treated in the second-line setting (66%). At the time of interim analysis, the median duration of survival follow-up is 7.8 months. The median OS for the control group was 5.4 months, 8.4 months in the doublet therapy group, and 9.0 months with the triplet therapy (comparing the triplet therapy vs. control; HR 0.52; P<0.001). A blinded independent central review assessed RR in this analysis for the first 331 patients who underwent randomization. The RR in the control arm was 2% compared to 20% with the doublet therapy and 26% in the triplet therapy group (comparing control vs. triplet therapy; P<0.001). Of note, a substantial portion of the patients were not able to be evaluated for response with the majority of these patients being those with clinical progression or who discontinued therapy due to adverse events (15.4%). Median PFS, by central review, was 1.5 months in the control group, 4.2 months in the doublet therapy group, and 4.3 months with triplet therapy. Interestingly, the percent of patients with a response who had a duration of response ≥6 months was greater in the doublet therapy (43%) than with the triplet regimen (24%). Toxicities were similar to that seen in the lead-in phase, however notable improvements in toxicities were seen with the doublet compared to the triplet regimen including diarrhea (62% vs. 33%), acneiform dermatitis (49% vs. 29%), nausea (45% vs. 34%), and vomiting (38% vs. 21%).

Reduced cost next-generation sequencing has resulted in a dramatically improved understanding of CRC including distinct molecular subtypes. It is now standard of care to test the tumors of patients with metastatic CRC for KRAS/NRAS/BRAF mutations, HER2 amplification, and microsatellite instability/mismatch repair deficiency. These molecular alterations are both prognostic and predictive and aid in defining personalized treatment algorithms at diagnosis or first evidence of metastatic disease.

The phase III BEACON Colorectal Cancer Study provides a significant advance for those patients with BRAFV600 mutant metastatic CRC. It is now standard of care to treat patients with BRAFV600 mutant metastatic CRC with the triplet regimen of encorafenib, binimetinib and cetuximab in the treatment refractory setting. It should also be considered reasonable to replace cetuximab with panitumumab if desired by the treating physician. This regimen should replace the use of an anti-EGFR therapy with chemotherapy or as part of the vemurafenib, irinotecan, and cetuximab regimen. It is notable how poorly the control group did with this prior standard therapy.

Of note, not all BRAF mutations have the same clinical impact with BRAFnon-V600 mutations (2% of CRCs) largely having a more indolent clinical course (22,23). These mutations can result in different changes in the BRAF protein other than activating the kinase domain. For now, these regimens presented here should be restricted to those cancers with BRAFV600 mutations or at least alterations that are thought to result in a similar activation of the kinase domain.

Further follow-up is needed to assess the differences between the doublet and triplet regimens. The triplet regimen may result in greater treatment response, however this study was not powered to detect this difference and comes at the expense of greater toxicities. For now, the triplet regimen is preferred due to the response benefit. However, should a patient develop treatment related toxicities requiring dose modification, if these toxicities could in any way be attributable to the MEK inhibitor than would favor discontinuation of binimetinib, over dose reduction or delay of encorafenib or cetuximab. Additionally, for some patients with worse performance status or co-morbidities it would be reasonable to initiate therapy doublet regimen with the doublet regimen.

BRAFV600 mutations also occur in cancers with mismatch repair deficiency (dMMR). BRAF mutations can occur in tumors that develop through the serrated/methylated pathway, which are characterized by the CpG island methylator phenotype (CIMP) (24). CIMP-high tumors commonly possess epigenetic silencing of mutL homolog 1 (MLH1) resulting in dMMR. Those cancers with a BRAFV600 mutation and dMMR have an intermediate prognosis between BRAFV600 mutant cancers without dMMR and BRAF wild-type cancers (24). The Checkmate-142 study recently demonstrated benefit for dMMR CRCs with single agent nivolumab and the combination of nivolumab and ipilimumab. Specifically for those dMMR cancers with BRAF mutations a RR of 25% was observed with nivolumab alone and a RR of 55% was observed with the combination of nivolumab and ipilimumab (25). Anti-PD1 therapies also provide the potential for a much longer duration of response, thus would prefer immunotherapy prior to targeted therapy for patients with BRAFV600 mutant dMMR cancers.

In summary, BRAFV600 mutant metastatic CRC is a distinct biological subtype with a poor prognosis and evolving treatment considerations. Cytotoxic chemotherapy in combination with anti-angiogenic therapy remains the standard of care first-line option. Future clinical studies are needed to assess the benefit of targeted therapies in the first-line setting to better understand which patients with BRAFV600 mutant CRC are most likely to benefit.

Conflicts of Interest: Dr. Kratz has no conflicts of interest to declare. Dr. Deming has served on an advisory board for Array BioPharma.