Acute pancreatitis (AP) is accompanied by intense abdominal pain that often requires hospital admission, but no therapies directed at causes of the disease yet exist (1). Evidence accumulated over decades of research revealed that the initial events of AP target the pancreatic acinar cell, where digestive enzymes are produced (1). Especially during the past 25 years, a hypothesis that has gained wide acceptance is that an excess of acinar cell cytosolic Ca2+ (Ca2+cyt) is a key initial trigger of AP pathology (1-3). This Ca2+cyt overload likely contributes to premature trypsin activation, a hallmark of AP pathology, as well as a plethora of other responses (4,5). Depending on its extent and persistence, Ca2+cyt overload in the acinar cell may perturb cellular energetics, confound complex secretory functions and homeostatic processes like autophagy, or induce cell death.

The basic pathobiology of Ca2+cyt overload is well established. Hyperstimulation of surface membrane receptors in acinar cells releases intracellular Ca2+ stores such as those within the endoplasmic reticulum (ER). Many receptors couple to ER Ca2+ release through activation of the inositol trisphosphate (IP3) receptors, which are ligand-gated, intracellular Ca2+ release channels. Substantial ER Ca2+ release triggers entry of extracellular Ca2+, predominantly through a process called store-operated Ca2+ entry (SOCE). In SOCE, special transmembrane proteins “sense” lowered ER lumenal Ca2+ concentration via lumenal domains. This information is then transferred to the cytoplasm, where a distinct domain mediates opening of certain Ca2+ permeable plasma membrane channels (designated as calcium release activated calcium, or CRAC) through direct physical contacts. Whereas SOCE is normally required for the Ca2+ signaling functions of all electrically excitable and non-excitable cells, its contribution to AP pathology has fueled hopes of developing therapeutic agents that address the root causes of the disease through studies of the mechanisms involved in SOCE and identification of specific targets.

SOCE/CRAC channels were known to exist long before their actual machinery was discovered; only in 2005–2006 were the key mediators of these Ca2+ entry pathways elucidated and first characterized. The components of this pathway (summarized briefly in Table 1) include the stromal interaction molecule (STIM) family molecules STIM1 and STIM2; these are the ER proteins with Ca2+-sensing motifs directed toward the ER lumen. STIM2 turns out to have two (i.e., STIM2α and STIM2β) splice variants with opposite roles as activators and inhibitors of SOCE, respectively (11). Major plasma membrane Ca2+ channels that open as a consequence of specific STIM contacts were found to be the Orai family molecules Orai1, Orai2, and Orai3, which form multimeric channels in a combinatorial fashion. Other plasma membrane channels such as transient receptor potential C3, Trpc3 also exhibit SOCE-like ion channel behavior. Release of ER Ca2+ and subsequent decrease in ER Ca2+ concentration promotes STIM1 clustering and conformational changes, ER dynamic behavior, and formation of tethered ER-plasma membrane contact sites bridged by STIM-Orai interactions. For excellent early reviews of the main components of SOCE and their functions (7,8).

Although much is now known about STIM behavior and direct interactions with Orai, additional auxiliary molecules also regulate SOCE. In 2010, a novel protein called CRAC regulator 2A (CRACR2A) was hypothesized to stabilize the STIM-Orai channel “ON”-state via interactions with both proteins (6). STIM-Orai-mediated SOCE was shown to be sensitive to levels of Ca2+cyt. Thus, after the Ca2+ pores switch ON, they subsequently switch OFF in response to the corresponding rise in Ca2+cyt, following distinct rapid and slow kinetics. Later, a novel protein termed SOCE-associated regulatory factor (SARAF) (formerly designated TMEM66) was identified in a functional screen that revealed its role in lowering mitochondrial, ER and basal Ca2+cyt levels (9). Knocking down SARAF enhanced ON-switching of STIM-Orai channels by removing its interactions with STIM. Thus, SARAF was shown to switch OFF a STIM1-Orai1 channel with slow kinetics (9). Further, its ER localization and structural similarity to STIMs suggested that STIM regulation is its main cellular function. SARAF negatively modulates STIM clustering, a requirement for Orai channel opening (7). A distinct molecule, STIMATE that promotes STIM clustering was found in 2015 by a proteomic approach (12). Thus, regulatory molecules with complementary modes of action participate in SOCE ON- (CRACR2A, STIMATE) and OFF- (SARAF) switching (Table 1). Subsequent studies of SARAF have established further aspects of its role as a brake on SOCE via SARAF-STIM contacts (13). Figure 1 provides an overview of SOCE and the SOCE-braking action of SARAF. 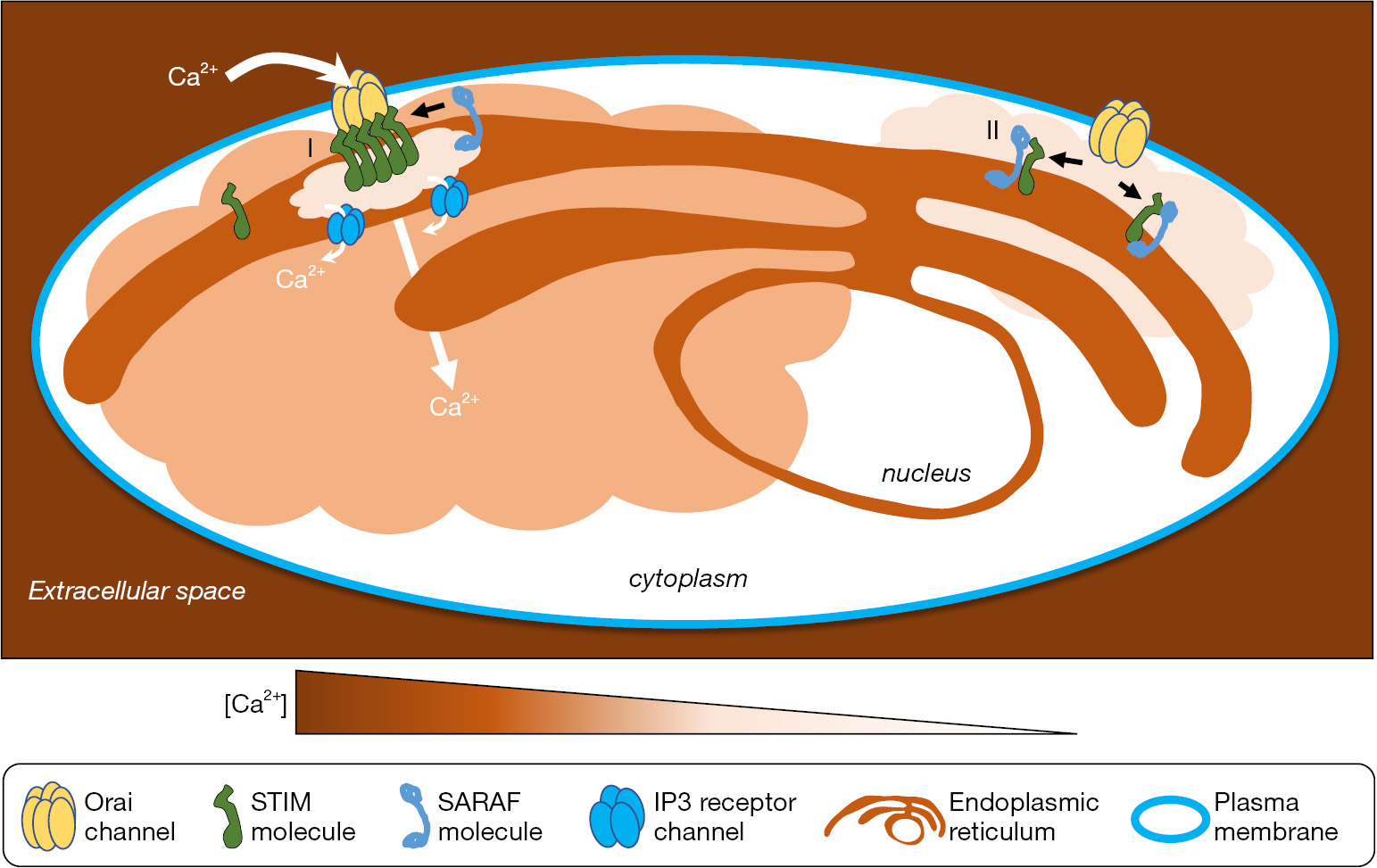 Based on the role of Ca2+ overload in AP pathology and its dependence on Ca2+ entry, blocking SOCE in acinar cells seems like a good candidate to target for an AP therapy. But which approach will prove most applicable? In recent years a focus of research has been on the chemical blockers (GSK-7975A and CM_128, also known as CM4620) that abrogate Orai channel function during SOCE in acinar cells, pancreatic stellate cells and neutrophils, all of which take part in AP pathology (14-17). Caution is warranted in the use of such Ca2+ signaling inhibitors as pancreatitis therapy in humans, as most of the studies have used rodent models and the findings may not translate well (18). In a new study just published in Gastroenterology, investigators drill down further into the mechanistic details of the STIM1-Orai mediated Ca2+ entry, investigating the use of SARAF as a regulatory brake on STIM-Orai mediated SOCE as an alternative approach (10).

To investigate the role of the SOCE regulatory molecule SARAF in pancreatitis, Son et al. manipulated SARAF expression levels in various models and used a fluorescence assay to measure interactions with STIM1. These investigations produce evidence that upon physiologic acinar cell stimulation, a SARAF-STIM1 interaction is enhanced. In contrast, hyperstimulation produces a more biphasic increase-then decrease in this interaction. Overall, the studies recapitulate the concept of SARAF as a brake on SOCE and demonstrate the application of overexpressed SARAF to reduce AP severity.

Roles of Ca2+ entry in AP pathology and severity have been appreciated for some time. Detrimental consequences of excessive Ca2+cyt levels include impairment of essential functions such as maintenance of the mitochondrial electrochemical potential coupled to cellular energy production and the orderly processing and packaging of digestive enzymes into secretory granules in acinar cells. Strategies to abrogate or diminish SOCE were investigated in pancreatitis model systems including those of mice, rats and humans. Until now, the potential of selective Orai channel blockers to attenuate AP severity was at the forefront of such investigations. The new study by Son et al. refocuses these studies onto a new target, SARAF that represents an endogenous regulatory mechanism. This study reinvigorates the quest to identify effective therapeutic agents to treat acute pancreatitis.