Is dyschloremia a marker of critical illness or euchloremia an interventional target to improve outcomes?

Despite chloride being the most abundant extracellular anion, its significance in clinical practice was undervalued for years. In the past decade this has dramatically changed to the point of chloride receiving the distinction of “queen” of electrolytes (1); with several observational and interventional studies focused on the chloride content of crystalloid solutions used for fluid resuscitation.

For years, isotonic 0.9% saline has been the intravenous crystalloid of choice for fluid resuscitation despite its supraphysiologic content of chloride in relation to plasma, its acidic pH, and the absence of other electrolyte content similar to plasma (2). Importantly, murine models of sepsis showed that the use of 0.9% saline for resuscitation caused hyperchloremic metabolic acidosis, increment in pro-inflammatory cytokines such as IL-6, increased nitric oxide release and NF-κB DNA binding, which was attenuated by the use of more balanced crystalloids with less content of chloride (3,4). Furthermore, incident acute hyperchloremia has been linked to increased risk of acute kidney injury (AKI), mediated by distal tubular chloride delivery affecting tubule-glomerular feedback and the imbalance between vasodilatory prostaglandin E2 and vasoconstrictive thromboxane A2 synthesis, thus causing vasoconstriction and ultimately decreasing renal blood flow (5).

Following pre-clinical evidence, several clinical studies focused on comparing balanced solutions (chloride restrictive approaches) vs. non-balanced solutions (chloride liberal approaches) (6-8). These studies showed that chloride-rich solutions are associated with increased mortality and less consistently with end-organ injury (e.g., AKI). Additionally, observational studies in humans confirmed the relationship of high chloride intravenous load and/or hyperchloremia with adverse outcomes in critically ill patients, including mortality and AKI (9-11). More conclusively, two recent large randomized clinical trials (SALT-ED and SMART) (12,13) both demonstrated benefit of balanced solutions over isotonic 0.9% saline as resuscitation fluids for the risk of major adverse kidney events (MAKE). Critically ill adults that received balanced solutions as intravenous resuscitation fluids had less frequent MAKE compared to those receiving 0.9% saline [14.3% vs. 15.4%, OR 0.91 (95% CI, 0.84–0.99); P=0.04]. Similarly, in non-critically ill patients, there was an advantage of balanced solutions over 0.9% saline (4.7% vs. 5.6% incident MAKE, OR 0.82 (95% CI, 0.70–0.95); P=0.01] (12,13). These studies somehow ended the resilience to the utilization of chloride-restrictive approaches for fluid resuscitation, and emphasized the need for implementing the more frequent use of balanced solutions for fluid resuscitation in the intensive care unit (ICU) and non-ICU settings.

In critically ill children, hyperchloremia has also been associated with AKI and increased mortality (14,15). Barhight et al. performed a retrospective single-center cohort study of critically ill children to examine the relationship of admission levels of serum chloride and change in serum chloride levels (<5 vs. ≥5 mmol/L) on the first day of ICU stay with hospital mortality (16). After adjusting for measured confounders, they found that increment in serum chloride of ≥5 mmol/L associates with a 2.3 (95% CI, 1.03–5.21) higher odds of mortality. Importantly, they reported a higher mortality rate in those already hyperchloremic on admission (≥110 mmol/L) in comparison to those with normochloremia (96–109 mmol/L) and hypochloremia (<96 mmol/L) on admission (40% vs. 11% vs. 6% for those with ≥5 mmol/L increase in serum chloride levels on the first day of ICU stay, respectively). This observation parallels the study by Neyra et al. (9) examining a cohort of critically ill septic adults, in which worsening hyperchloremia (every 5 mmol/L increment in serum chloride within the first 72 h of ICU stay) in those patients already hyperchloremic on admission independently associated with hospital mortality [adjusted OR 1.37 (95% CI, 1.11–1.69); P=0.003].

In a commentary related to the work by Barhight et al., Shen et al. raised the concern of interpreting increment in serum chloride levels without addressing the potential interaction with baseline levels on admission (17). Using the MIMIC III database, they reported a bidirectional relationship between increment in serum chloride levels and mortality, highlighting its association with decreased mortality in patients with hypochloremia (serum chloride <85 mmol/L perhaps hypovolemic) and increased mortality in those with hyperchloremia (perhaps hypervolemic) on admission. Moreover, they report that worsening hyperchloremia exhibits a dose-response direct effect on mortality. This bidirectional relationship was likely not observed in the work by Barhight et al. due to the low number of children with hypochloremia on admission. It is possible that patients with hypochloremia may be hypovolemic (chloride “avid”) and that restoring euchloremia may be equally beneficial as avoiding worsening hyperchloremia in their counterparts. It is also important to remark that a possible explanation for this interaction is that serum chloride levels on ICU admission represent not only the volume status of the patient but the pre-ICU type and amount of intravenous fluids administered, which becomes relevant for patients transferred from other facilities or with a prolonged hospitalization before admission to the ICU. Despite Barhight et al. adjusting for total fluid volume in the first 24 h in the multivariable analysis, pre-ICU fluid administration/fluid overload was not quantified.

Hypochloremia has also been linked to increased mortality and organ dysfunction in patients with heart failure and in heterogeneous critically ill populations (18,19). Shao et al. conducted a retrospective cohort study of 6025 critically ill adults and found that dyschloremia (both hypochloremia and hyperchloremia) is associated with AKI (20). Patients with hypochloremia (<100 mmol/L) and hyperchloremia (>108 mmol/L) had a higher incidence of AKI compared to normochloremic patients (43% vs. 30%, P=0.006 and 34% vs. 30%, respectively; P<0.001). Additionally, hypochloremic patients had higher mortality and longer length of hospital stay compared to those without hypochloremia. In a different study, Oh et al. examined temporal change of serum chloride levels in a heterogeneous ICU population and found that decrements in chloride levels by 1 mmol/L within 72 h of ICU stay were associated with a 4% increased odds of developing AKI at the same timepoint (21). This observation was also consistent in a subgroup of patients in which decrements in chloride levels were associated with increased levels of cystatin C, a marker of kidney dysfunction. Unfortunately, the three-way interaction between admission levels, change in serum chloride levels, and outcome was not examined in this study.

Despite evolving research on this topic, the debate on the type (and amount) of fluid therapy to be given to the right patient at the right time is still ongoing. In the era of precision medicine, a pH-guided approach of fluid resuscitation has been proposed in the ICU scientific community and deserves consideration (22). This approach consists of favoring isotonic 0.9% saline for patients with hypovolemia and metabolic alkalosis (a common reason for hypochloremia); balanced crystalloids for patients with no major pH abnormalities; and the use of isotonic bicarbonate for patients with severe non-anion gap metabolic acidosis and/or anion gap metabolic acidosis due to uremia. Nonetheless, the disadvantage of this approach is the possibility of multiple interrelated acid-base disorders with distinct pathobiological triggers in critically ill patients with multi-organ failure. Furthermore, use of isotonic bicarbonate conveys other problems related to hyperosmolarity, carbon dioxide retention with intracellular acidosis, hypocalcemia and hypokalemia (23). In this context, after the increasing evidence that dyschloremias may have negative clinical outcomes; we propose a more practical approach of chloride-guided fluid resuscitation aiming for euchloremia (Figure 1). Importantly, these are theoretical approaches that need to be rigorously and systematically tested in properly designed interventional studies. 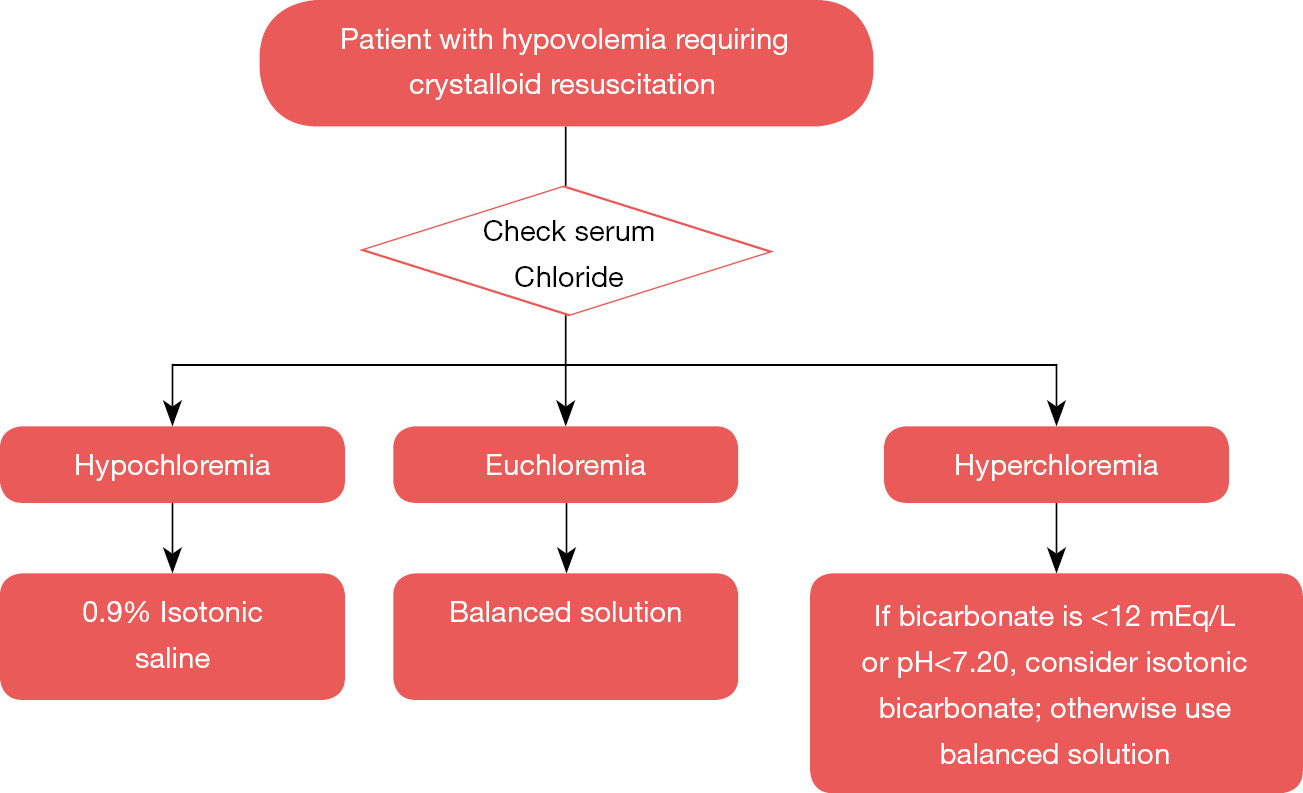 In summary, the past decade has underpinned a surge of evidence supporting the association of dyschloremia with increased mortality and possibly AKI. Worsening hyperchloremia has been consistently associated with worse outcomes in heterogeneous critically ill populations whilst “correcting” hypochloremia (restoring euchloremia) can favor positive outcomes. Therefore, serum chloride levels constitute a relevant and dynamic clinical parameter to guide fluid therapy during acute illness. Though we acknowledge that fluid therapy should be individualized (e.g., timing, type, amount, etc.) according to specific patient needs and fluid responsiveness, an initial approach could be tailored to restoring or maintaining euchloremia.