Non-vitamin k antagonist oral anticoagulants (NOACs) are drugs of choice for the majority of patients with atrial fibrillation (AF) to prevent cerebral strokes (1). The risk for stroke in AF patients is determined by concomitant clinical factors, which are summarized in the CHA2DS2-Vasc risk score (2). Of note, in many patients AF appears to be the consequence of an atrial cardiomyopathy, which triggers the occurrence of AF and induces a thrombogenic endocardial remodeling process (Figure 1). The endocardial remodeling encompasses overexpression of several adhesion molecules, which may cause clot formation at the endocardial surface, and in particular in the left atrial appendage (2-6). Many AF patients will develop coronary artery stenoses, which require stent implantation (PCI). Thus, dual antiplatelet therapy (aspirin and P2Y12 inhibitors) is necessary to prevent clot formation and thrombosis of implanted stents (7-10). The main question is, what is the best antithrombotic therapy in AF patients requiring PCI? Dual antithrombotic regime (DAT) or triple antithrombotic regime (TAT)? 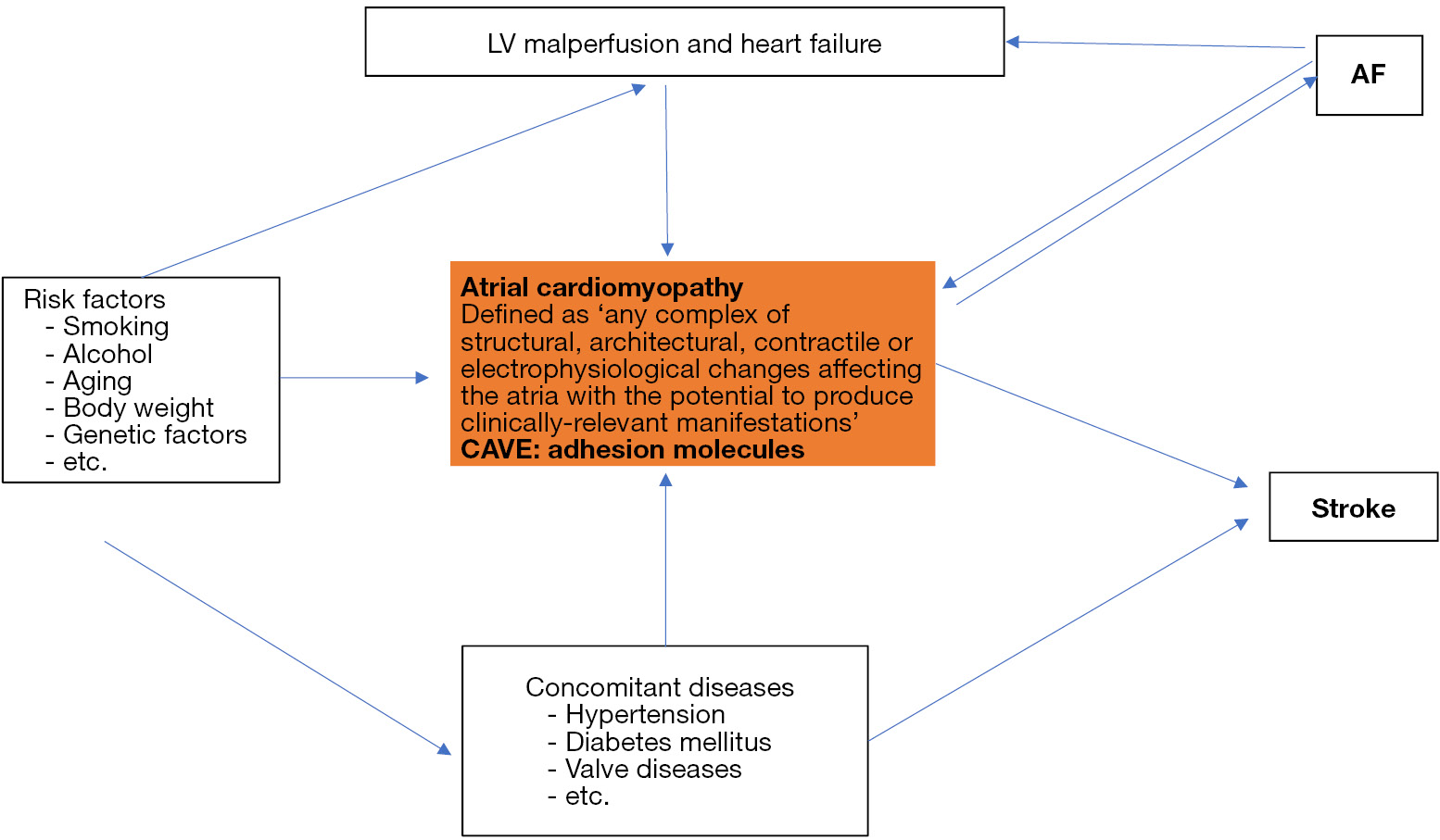 Figure 1 Impact of atrial cardiomyopathy on atrial thrombogenesis in patients with and without AF. In most patients with concomitant risk factors, AF appears to be an epiphenomenon, which characterizes the presence of an atrial cardiomyopathy. The induced endocardial alterations, in particular overexpression of adhesion molecules, cause thrombogenesis in the left atrial appendage. AF, atrial fibrillation.

The AUGUSTUS trial was designed to assess the effect of apixaban versus warfarin in AF patients after an acute coronary syndrome (ACS) or PCI (11). The AUGUSTUS trial had a two-by-two factorial design. AF patients with an ACS or PCI were randomized to receive apixaban or a vitamin K antagonist and to receive aspirin or placebo. Main endpoint of this study was defined as major or clinically relevant nonmajor bleeding. Secondary endpoints were death or hospitalization and a composite of ischemic events. Lopez et al. included a total of 4,614 patients (11). Main endpoint occurred in 10.5% in the apixaban arm, as compared with 14.7% in the VKA arm (hazard ratio, 0.69; 95% CI, 0.58 to 0.81; P<0.001), and in 16.1% of the aspirin treated patients, as compared with 9.0% on placebo (hazard ratio, 1.89; 95% CI, 1.59 to 2.24; P<0.001). The apixaban treated patients had a lower incidence of death or hospitalization compared to the VKM arm (11). The aspirin group of the trial showed similar rates of death or hospitalization and of ischemic events compared to placebo. Thus, AF patients with ACS or PCI treated with a P2Y12 inhibitor, apixaban, without aspirin, resulted in less bleeding and fewer hospitalizations without significant differences in the incidence of ischemic events compared to the other groups studied (11).

The results of the trial are of importance and will influence clinical practice. However, the Augustus trial has some limitations. The trial randomized patients 6.6 days after the coronary event. Thus the first weeks of antithrombotic therapy was not covered in the trial. Furthermore, not all patient received PCI. Therefore, AUGUSTUS analyzed a heterogenous group of AF patients. Follow up in AUGUSTUS was rather short (6 months) and not in clear accordance to current guidelines, which recommend dual therapy in ACS patients for 12 months. In addition, triple therapy was applied for 6 months, which appears to be aggressive in the light of the RE-DUAL trial or ENTRUST AF PCI. A recent meta-analysis has analyzed all four trials, which assessed antithrombotic therapy in AF patients with coronary artery diseases with and without stenting (12). This analysis clearly showed that dual therapy consisting of a NOAC plus a p2Y12 inhibitors is safer than triple therapy encompassing a VKA, aspirin and a P2Y12 inhibitor. Of note, it was also shown that the use of aspirin is of importance in the early phase after stenting to protect the stent against thrombotic events. This first full meta-analysis confirmed previous findings on the advantage of DAT over TAT with respect to bleeding complications (12). However, this analysis showed a significant reduction of intracranial haemorrhage with DAT as compared to TAT. This finding is consistent with prior NOAC studies focusing on AF but non-PCI patients (12,13). Interestingly, there was high heterogeneity across the four AF PCI trials with respect to bleeding endpoints (12). Another clinically relevant finding from the meta-analysis is the increased rates of cardiac ischemia and stent thrombosis. This aspect is relevant and reinforces the notion that the upfront selection between TAT or DAT and/or the optimal timing for aspirin discontinuation after invention or ACS should be individualised (12). The mechanisms through which early aspirin discontinuation exposes patients to higher ischemic risks remain speculative.

Thus, triple therapy is of importance in all AF patients after stenting for some weeks to prevent stent thrombosis (12,13). In contrast, this strategy is not necessary in AF patients with ACS who are medically managed as demonstrated by the AUGUSTUS trial. After 14 days of triple therapy all AF patients might be reduced to dual therapy to reduce the cumulative bleeding risk. After 6 months (in stabile coronary artery disease) or after 12 months (ACS) dual therapy should be terminated and NOAC therapy should be continued as monotherapy (Figure 2A,B). 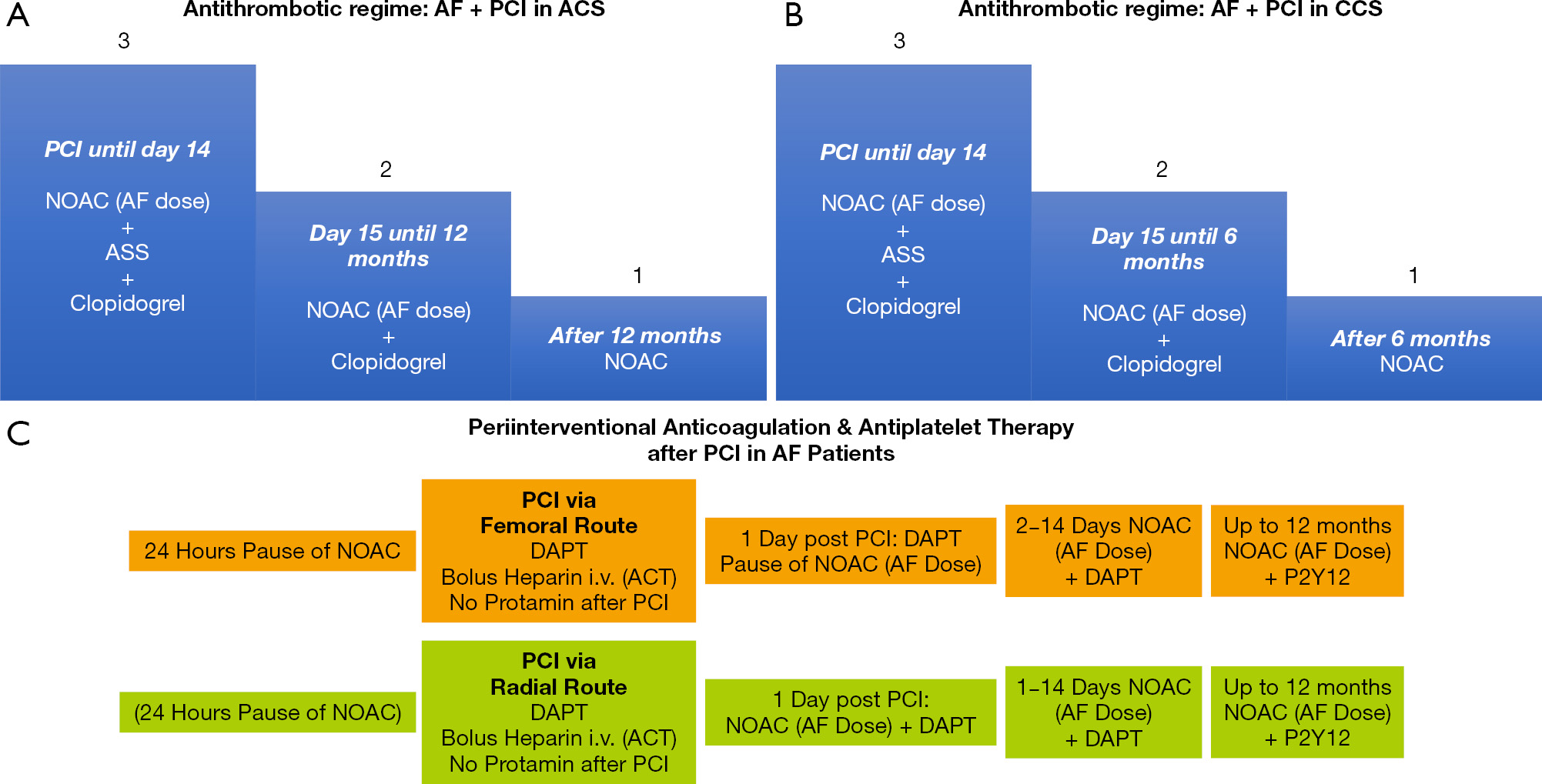 The ENTRUST AF PCI trial suggests that bleeding rates after PCI differ between radial and femoral access (8). Thus, the periprocedural antithrombotic regime might address this aspect. In most centers, which use the femoral rout, oral anticoagulants including NOACs are paused 24 hours prior to the procedure. Re-initiation of therapy might start about 24 hours after the procedure to reduce bleeding from the femoral access site. This temporary pause of NOACs might not be necessary if the radial route is used for PCI (Figure 2C).

Overall, the AUGUSTUS trial in addition to the other three AF PCI trials adds substantial clinical information to the field (8-11). Further substudies are warranted to assess differences between various subgroups of AF patients like ACS and stable CAD (CCS). A latest report from AUGUSTUS suggest than aspirin therapy should be given for at least one week in patients with low risk of stent thrombosis and up to 30 days in patients at high risk (14). Therefore, the suggested time period of 14 days of aspirin therapy (Figures 2A,B) appears as a compromise since aspirin induces an irreversible inhibition of platelet function, and therefore, platelets are inhibited up to 28 days after 14 days of continuous aspirin therapy.

This work was supported by Research grant from the Josef-Freitag-Stiftung Paderborn and Deutsche Herzstiftung.