Acute variceal hemorrhage is one of the crucial complications of cirrhosis (1-4). The overall prognosis has been improved over the past few decades on account of significant improvement in the way of diagnosis and therapy, for instance, endoscopic treatment, vasoactive agents and antibiotics (1,5). However, the mortality rate is still growing, which is about 20% at 6 weeks (1,3-5).

Endoscopic therapy and pharmacological therapy have different mechanisms of action: endoscopic therapy [endoscopic injection sclerotherapy (EIS), endoscopic variceal ligation (EVL)] plays a role directly while vasoactive drugs reduce the portal pressure (6,7). In current practice guidelines, the combined therapeutic procedure of drugs and endoscopy has been highlighted to be the first-line therapy for patients with acute variceal hemorrhage, notably the early application of vasoactive drugs even prior to endoscopic procedure in suspected upper-intestinal hemorrhage (8-10). In the meantime, compared with endoscopic monotherapy, one previous test had proved that, combined therapy in controlling early hemorrhage [relative risk (RR), 1.12; 95% CI: 1.02–1.23] and 5-day hemostasis (RR, 1.28; 95% CI: 1.18–1.39) is more effective when vasoactive drug (vasopressin, terlipressin, octreotide or somatostatin) was administrated during the therapeutic course of endoscopic procedure (11).

Nevertheless, a three-arm trial exhibited that somatostatin, terlipressin and octreotide have similar ratio in mortality (8.0%, 8.9% and 8.8%, P=0.929) and hemorrhage (3.4%, 4.8% and 4.4%, P=0.739), which made it difficult to screen out the preferred vasoactive drugs with the highest efficacy to treat acute variceal bleeding (12). Thus, acquiring comparative evidence on pharmacological agents would be very useful. We therefore performed a network meta-analysis integrating direct and indirect evidence to compare the effectiveness of vasoactive drugs (vasopressin, terlipressin, somatostatin, octreotide) facilitating endoscopic therapy for the treatment of acute variceal bleeding in patients with cirrhosis.

A comprehensive electronic computerized literature was performed to identify original publications with relevant topic from Web of Science, Medline, Embase, Cochrane Library and Scopus regarding the vasoactive drugs for the treatment of the acute variceal bleeding. We used different terms and various combinations in our search details as reported in Table S1. We searched the literature published before March 2019. All searches were restricted to human studies and only full-text available research was included. Reference lists were manually checked to avoid duplicate.

Data on the following study-, patient-, and treatment-related characteristics were abstracted onto a standardized form:

By two authors (Y Xan and Z Zou) independently and discordant results were resolved by discussion between the two authors or by consulting a third senior researcher (X Qi) and resolved by consensus.

We assessed study quality using the Cochrane Collaboration’s tool for assessing risk of bias in RCTs (14). Any disagreements were resolved by seeking for consensuses.

The following endpoints were included in our network meta-analysis:

In the absence of direct (i.e., head-to-head) comparisons, network meta-analysis was performed within Bayesian framework (19). We modeled any two-arm comparison as a function of each intervention with a reference intervention (i.e., placebo). The hypothesis of consistency or intervention effects underlying this approach which is to say the same effects of direct and indirect comparison are reasonable. The Bayesian network meta-analyses results were compared with pairwise meta-analyses results to evaluate inconsistency. The node splitting method was used to calculate the inconsistency of the model (20). Significant inconsistency was indicated if node-splitting analysis derived P<0.05.

Meanwhile, we assessed the ranking probabilities for all treatments. The treatment hierarchy was summarized and reported as surface under the cumulative ranking curve (SUCRA) values which represent the probabilities of each treatment being ranked the best (21). All P values are 2-tailed and a P<0.05 indicates a significant difference for all tests (except for heterogeneity).

We confirm that all studies involved in data synthesis and statistical analysis in fact get informed consent from each study participants and that each study was approved by an ethics committee or institutional review board.

The authors are accountable for all aspects of the work in ensuring that questions related to the accuracy or integrity of any part of the work are appropriately investigated and resolved.

One hundred seventy-seven unique studies were identified in total using the search strategy after which we reviewed 60 studies with full-texts and we included 14 RCTs with potential eligibility at last in this network meta-analysis (12,22-34). Literature search process was demonstrated in Figure 1. 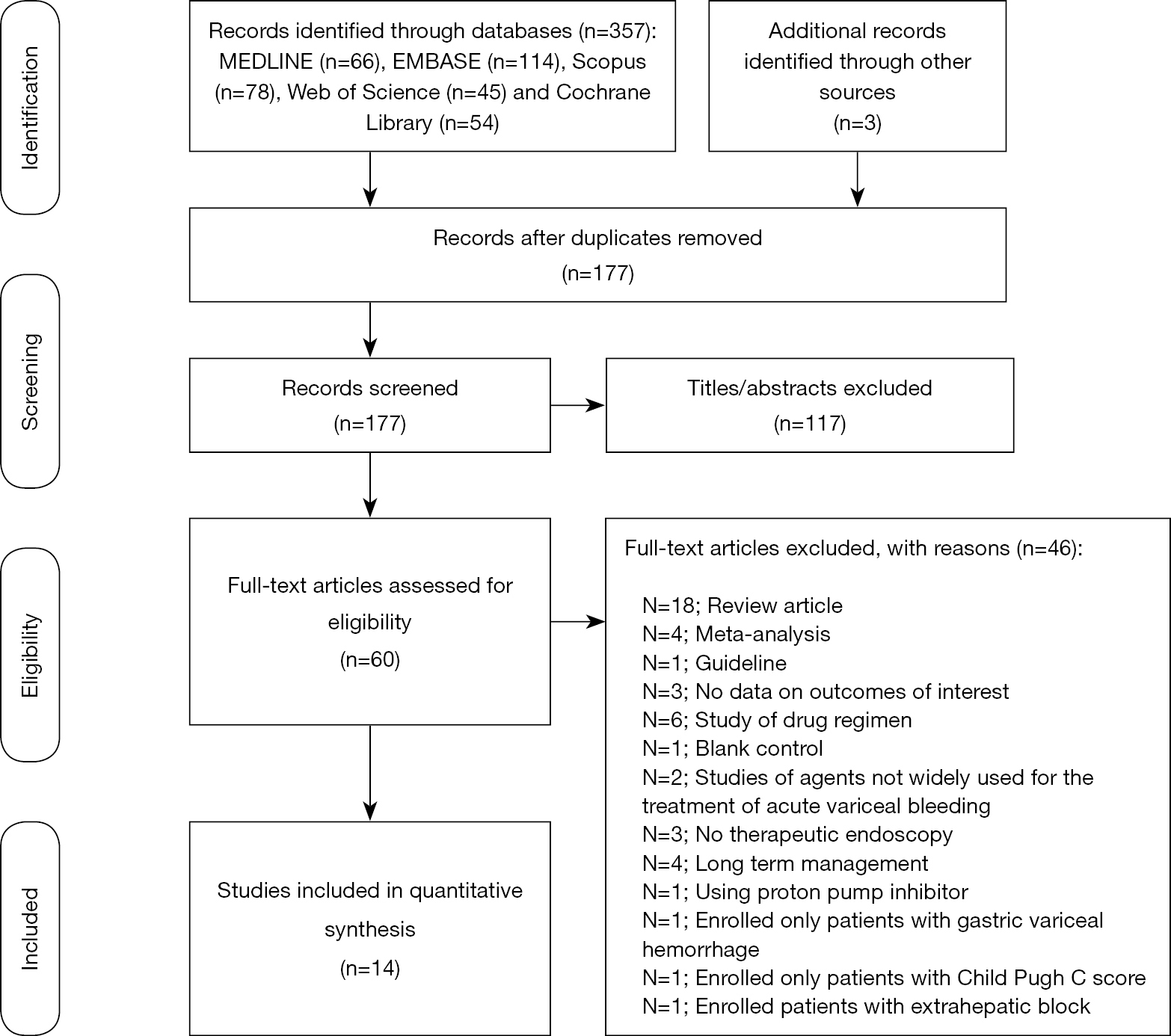 Table 1 exhibits the characteristics of the included RCTs in this network meta-analysis. Overall, these 14 trials enrolled 2,203 patients with liver cirrhosis and acute gastroesophageal variceal bleeding, with a median sample size of 65.5 (33-780) patients. Among the RCTs with potential eligibility, the first RCT was published in 1986 and the most recent publication was from 2015. Twelve RCTs (85.7%, 12/14) were performed as single center trials; the remaining trials were multicenter (12,24). Ten RCTs had regular follow-up time which ranged from 5 to 60 days whereas participants in 4 RCTs were observed until discharged from the hospital. 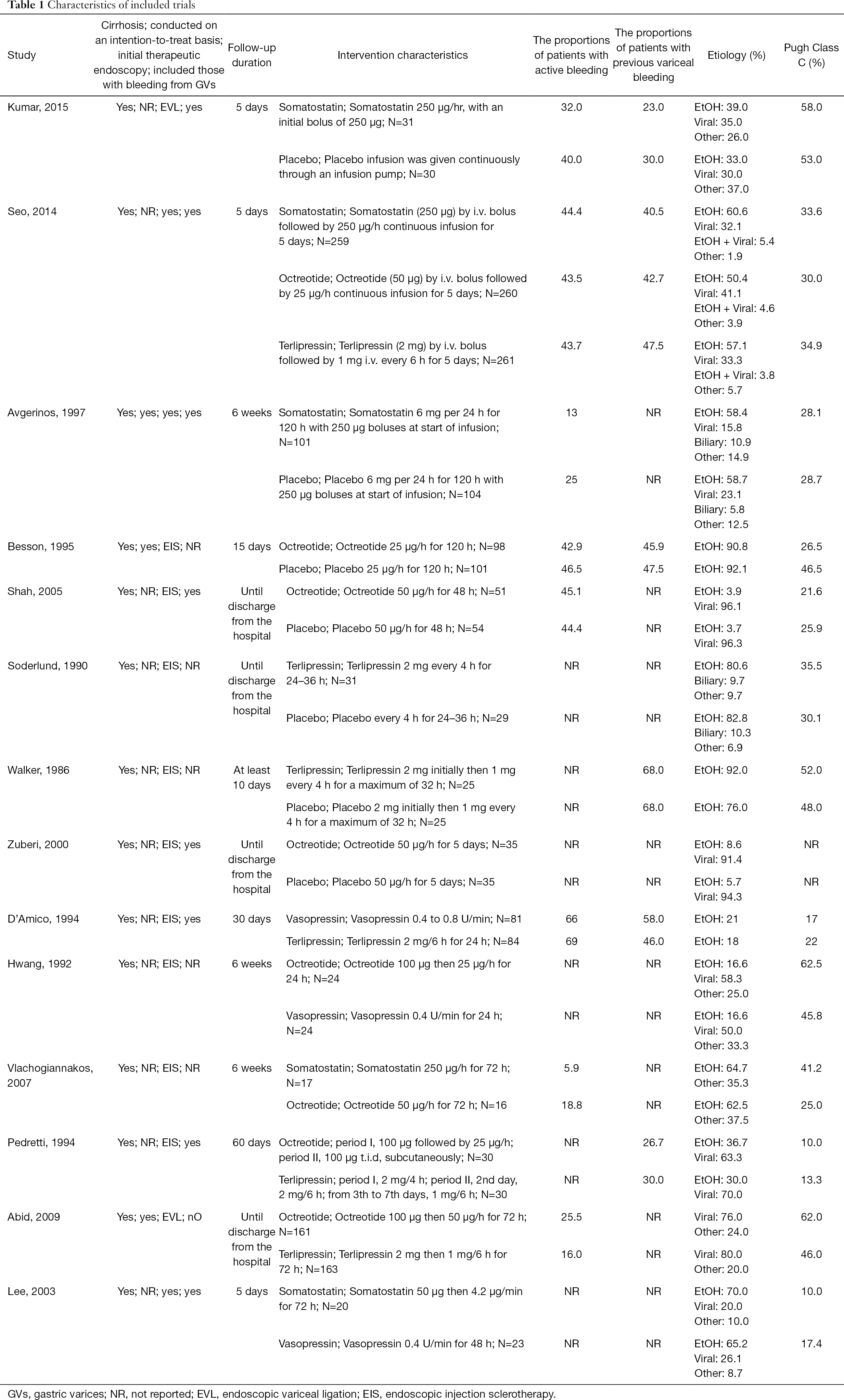 Of the 14 RCTs comparing the efficacy of pharmacological agents to each other or with placebo on the basis of therapeutic endoscopic intervention, 13 were two-arm trial. Among them: 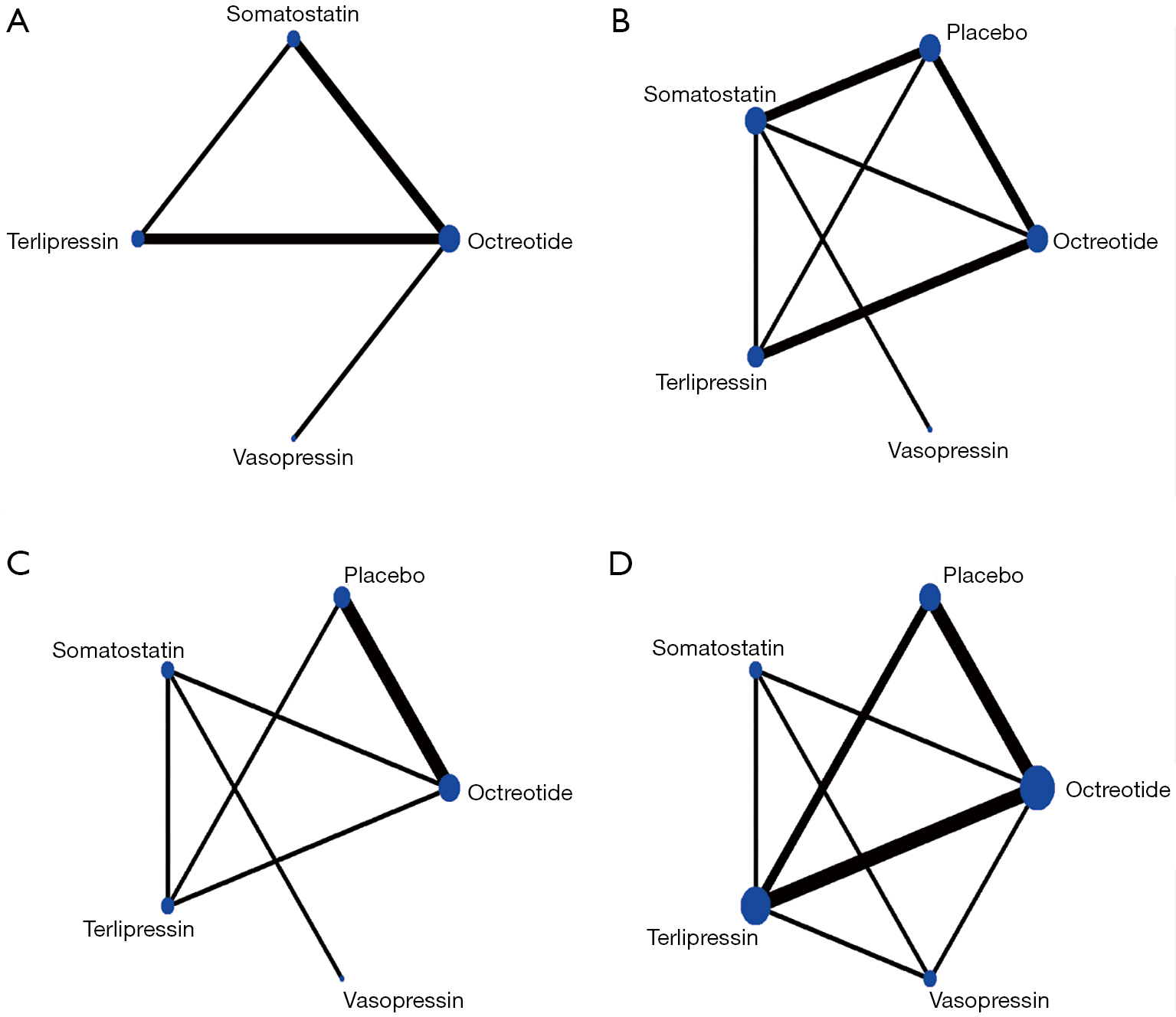 Figure 2 Network geometry of trials for six-week mortality (A), five-day mortality (B), rebleeding (C) and control of initial bleeding (D).

Briefly, the result of quality assessment shows that the studies were felt to be at low risk of bias, with regard to selection, attrition and other bias. Of the 14 included RCTs, 1 RCT (7.1%) did not report the method of generation of randomization sequence. Three RCTs (21.4%) did not provide sufficient details to make a judgement on the adequacy of allocation concealment and another RCT (7.1%) did not report details on blinding of outcome assessors. Meanwhile, 2 RCTs (14.3%), 4 RCTs (28.6%), 5 RCTs (35.7%) did not provide sufficient data in the attrition bias, reporting bias and other bias segment respectively. Overall, the risk of bias in individual studies is summarized in Figure S1.

None of the differences in all comparisons was statistically significant in pairwise meta-analysis as shown in Figure 3A. 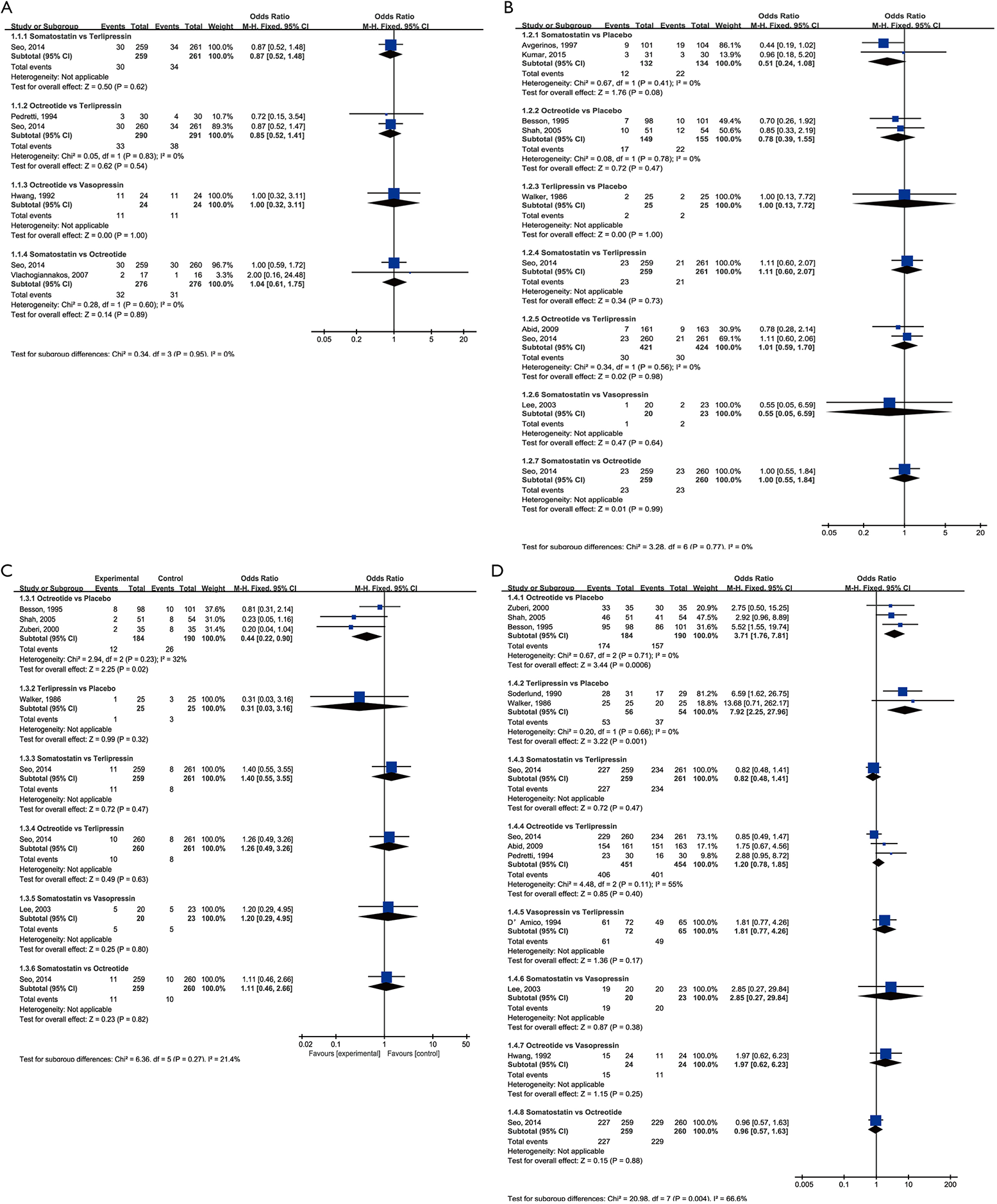 No agent was clearly superior to others in network meta-analysis (Table 2). 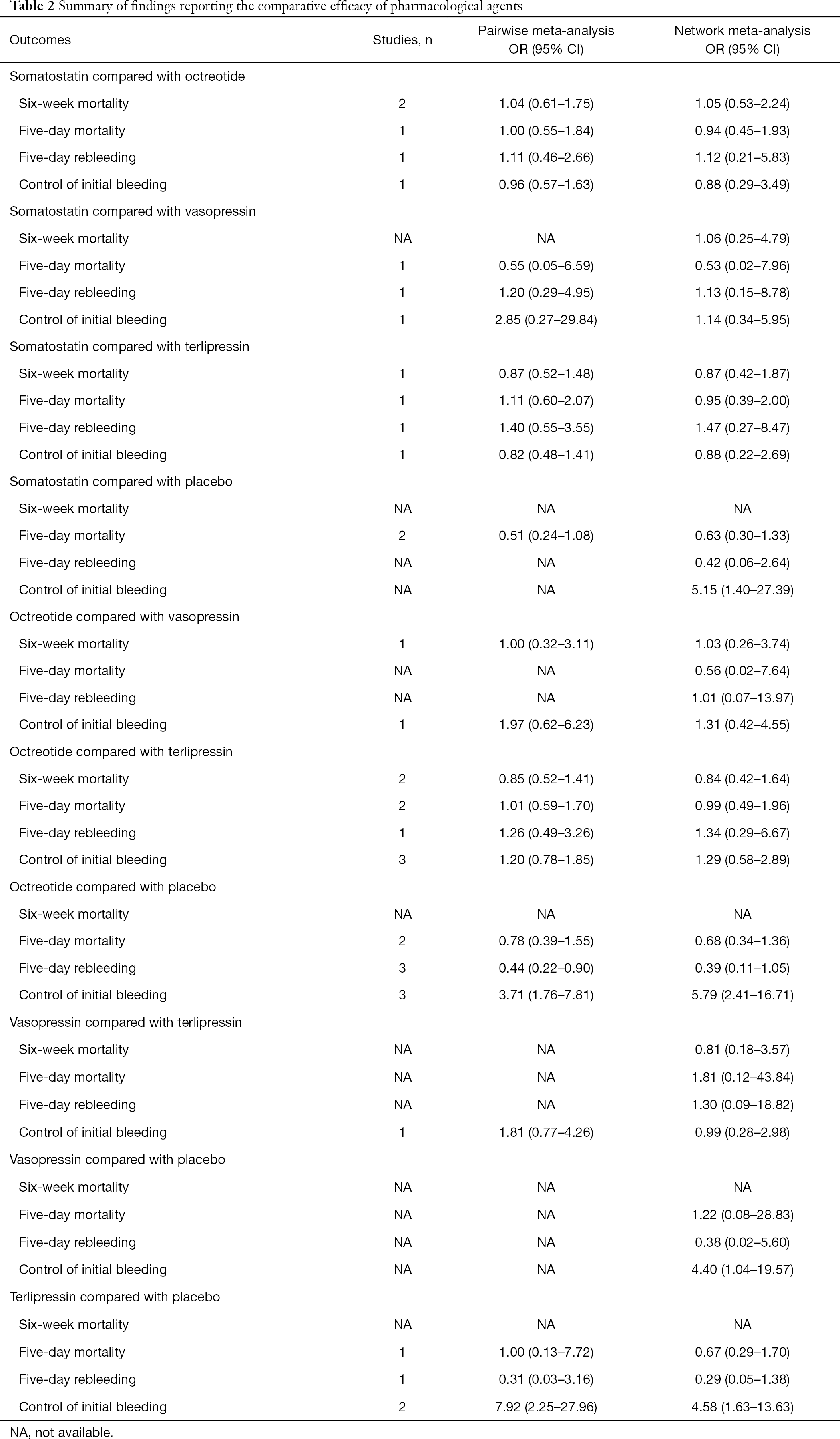 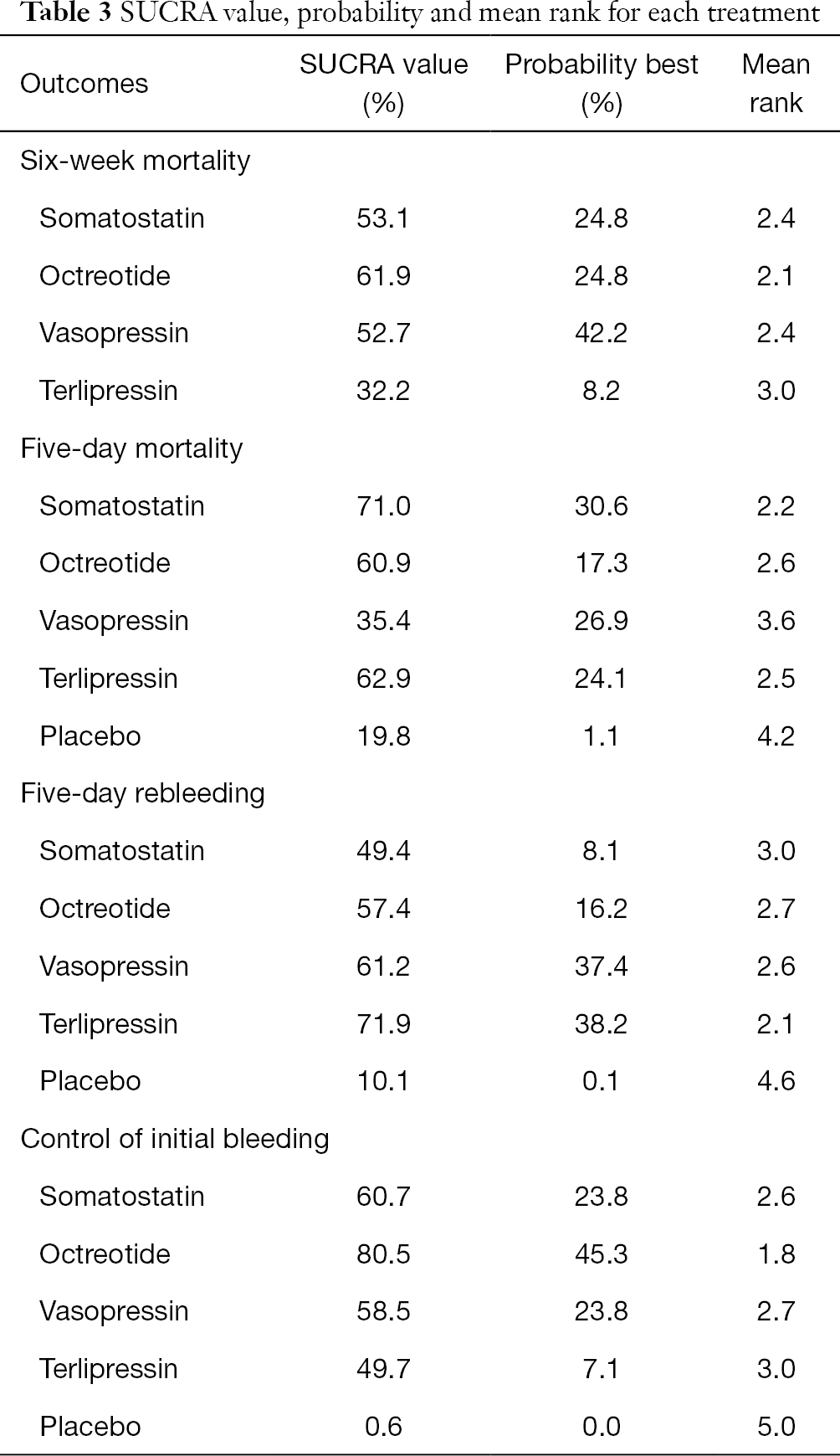 None of the differences in all comparisons was statistically significant in pairwise meta-analysis as shown in Figure 3B.

None of the difference in all comparisons was statistically significant in network meta-analysis (Table 2).

On direct meta-analysis (Figure 3C), the adjuvant therapy of octreotide facilitating endoscopic intervention for the acute variceal bleeding patients to prevent rebleeding compared to placebo (3 RCTs; OR, 0.44; 95% CI: 0.22–0.90) was associated with decreased risk of rebleeding. Other comparisons did not illustrate a significant difference.

None of the difference in all comparisons was statistically significant in network meta-analysis (Table 2).

Control of initial bleeding within 24h after T0

We did not find evidence of publication bias based on funnel plot asymmetry (Figure S2). In addition, Node-splitting analysis indicated that there was no significant inconsistency between direct and indirect evidence in all involving outcome (all P>0.05).

Not only can vasoactive drug require no complex technique but avoid the hazards of invasive methods, which make it appealing in controlling acute variceal bleeding. By the method of enzymatic cleavage, terlipressin, the analogue of vasopressin, is slowly converted into active vasopressin in vivo. With less severe vascular complications and their subsequent discontinuation of therapy, terlipressin have shown to be much more effective than vasopressin in controlling variceal bleeding with an extension of the biological activity (35-37).

In the meantime, the mechanism of somatostatin and its analogue octreotide is the visceral vasoconstriction of the collateral vessels, which can ameliorate the collateral blood flow and have the similar pharmacological effects for variceal hemorrhage (38-40). In addition, on the one hand, octreotide could reduce gastroduodenal mucosal flow and upregulate intragastric pH (41), on the other hand, octreotide is generally well tolerated with transient or mild adverse events (42) mostly occurring in gastrointestinal tract and hepatic duct and related to the inhibition the release of multiple hormones in gastrointestinal tract (43,44).

In this updated systematic review and network meta-analysis, we combined direct and indirect evidence from 14 RCTs involving 2,187 patients with gastroesophageal varices to estimate the comparative efficacy of pharmacological agents as adjuvant therapy to facilitate endoscopic interventions. We made several key observations:

In our network meta-analysis, when comparing the aforementioned four pharmacological agents, we do not appreciate a statistical difference in 6-week mortality, initial control of bleeding, 5-day mortality and 5-day rebleeding. In the meantime, given that none of the vasoactive drugs were associated with statistically significant difference when compared with placebo in the outcome of 6-week mortality, thus indicating the necessity of other pharmacological agents such as carvedilol or propranolol once vasoactive drugs are discontinued. Nevertheless, we do exhibit a superiority when these drugs were compared to placebo and note that octreotide had the highest probability of being ranked the first as for the initial control of hemostasis with mean rank equals to 1.8. Because of the variable definition of specific side effects in the included studies, we did not analyze these in network meta-analysis. Instead, we calculated the total adverse events to exhibit a general evaluation of the safety and tolerability. As a result, octreotide carried the lowest risk of adverse events and serious adverse events compared to other drugs.

It had been illustrated in previous study that risk-stratification model consists of Child-Pugh classification or End-Stage-Liver Disease (MELD) score and clinical manifestation and index including initial systolic blood pressure and serum creatinine are associated with therapeutic effect among those patients who presenting with acute variceal bleeding (12,45,46). Apparently, all these parameters need to be taken into account to tailor the therapeutic strategy for individual treatment on the basis of the comparative results from previous trials. Endoscopic monotherapy and short-term pharmacological therapy can be administrated to patients with low-risk variceal bleeding in avoidance of unnecessary side effects, whereas additional methods of portal pressure reduction such as transjugular intrahepatic portosystemic shunt procedure rendering sufficient and efficient benefit for high-risk patients (47).

Besides inherent limitations of individual trials, there are limitations to our analyses. The doses and administration of the medications differed among the studies, thus possibly producing bias. Meanwhile, the most widely used endoscopic treatment administrated to patients with suspected variceal bleeding were EIS and EVL. Though EVL is technically a superior endoscopic procedure with better results in acute bleeding (48,49), we did not strictly impose restrictions on the choice of endoscopy treatment. Despite of the fact that EIS and vasopressin were no longer used and recommended for acute variceal bleeding, they were hired as spots in Bayesian model in this network meta-analysis. Additionally, there were distinctions of methods of outcome ascertainment among involved trials.

The main assumption underpinning the transitivity of direct evidence and indirect evidence is that there exists the common comparator between the trials (50). In avoidance of the inconsistency, we strictly followed the practice guideline (51) recommendation of the initial endoscopy procedure if the detection of acute variceal bleeding when selecting fulfilling trials. Overall, this systematic review indicated that octreotide provides the best initial hemostasis efficacy, followed by somatostatin and vasopressin, and thirdly by terlipressin. Moreover, only octreotide was more effective than placebo in decreasing 5-day rebleeding. Considering the benefit needs to be balanced against safety and tolerability, octreotide also carries the lowest risk of adverse events and severe adverse events. Taken together, octreotide is rendered as the preferred vasoactive drugs for patients with the detection of acute variceal bleeding.