Globally, head and neck cancers accounted for an estimated 705,781 malignancies and 358,108 deaths in 2018 (1); combined, they are the sixth most common type of cancer worldwide, more than 90% of which is squamous cell carcinoma (2). Head and neck squamous cell carcinoma (HNSCC) is a heterogeneous disease occurring in various sites within the head and neck region, including the larynx, oropharynx, oral cavity, and hypopharynx. The most common risk factors are tobacco and alcohol use and high-risk human papillomavirus (HPV) infection (3,4). Although detection rates vary based on detection method and study populations, approximately 24.9% to 73.1% of patients with oropharyngeal squamous cell carcinomas (OPSCCs) and 6.1% to 28.8% of patients with non-oropharyngeal head and neck squamous cell carcinomas (non-OPSCCs), which include cancers of the larynx, oral cavity, and hypopharynx, are HPV-positive (5-10). Although several types of HPV have carcinogenic potential, the HPV 16 subtype accounts for more than 90% of HPV-positive HNSCCs (6,7,11,12).

Previous studies have shown that patients with HPV-positive OPSCC are clinically distinct from HPV-negative patients and have a better prognosis (7,13). However, the underlying role of HPV 16 in squamous cell carcinomas of the head and neck in regions outside the oropharynx and its relationship to clinical outcomes has not been established (14-16).

The aim of this study was to investigate the prevalence of HPV 16 and its association with survival outcomes in a large non-OPSCC patient cohort. Both Cox proportional hazard regression analysis and propensity scoring methods were used to reduce the effect of confounding variables.

The Peking Union Medical College Hospital (PUMCH) Ethics Committee approved this study protocol. All participants provided informed written consent. Previously untreated non-OPSCC patients who were examined at PUMCH between January 2006 and January 2016 were enrolled in this study. Diagnosis was based on specimens obtained from surgery or biopsy, and each was reviewed by an experienced pathologist. Exclusion criteria included second primary tumor; primary tumor site other than the oral cavity, larynx, or hypopharynx; histopathologic diagnosis other than squamous cell carcinoma; distant metastasis; previous palliative treatment; inadequate specimens; and inadequate follow-up data. A flowchart describing subject recruitment and exclusion is shown in Figure 1. 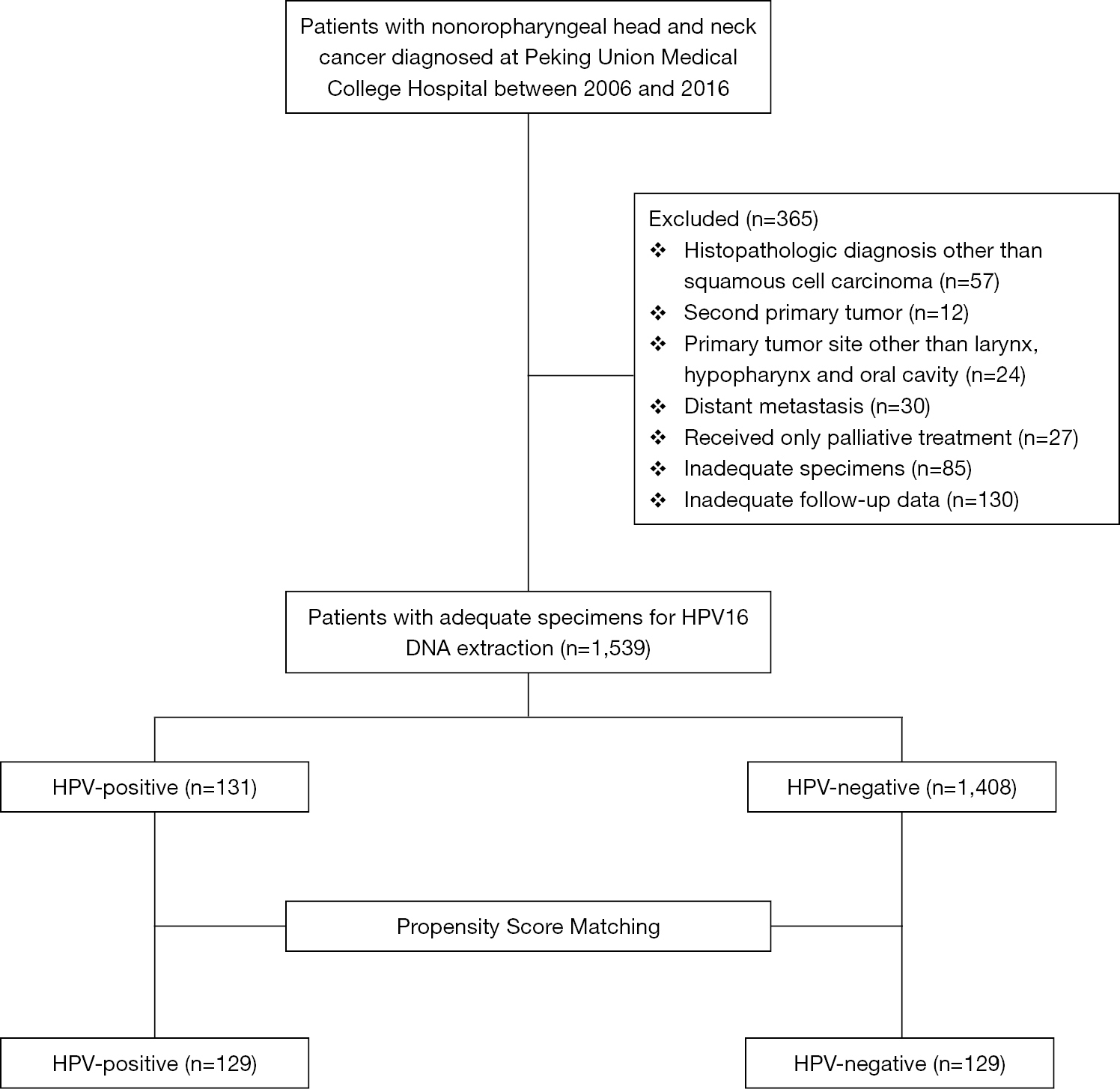 Clinical information was extracted from patient medical records and included gender, age, tobacco and alcohol consumption, medical comorbidity score, histopathologic grade, tumor site, stage, and primary treatment modality. Smokers were defined as patients who had smoked more than 100 cigarettes in their lifetime, whereas nonsmokers had smoked 100 cigarettes or fewer. Drinkers were defined as patients who drank alcoholic beverages at least once a week for more than 1 year during their lifetime; patients who did not meet this criterion were defined as nondrinkers. Medical comorbidity scores were classified according to the Adult Comorbidity Evaluation-27 (ACE-27) (17). All patients were treated with curative intent, and HPV status was unknown at the time of treatment. Treatment decisions were based on the existing policies of the PUMCH Head and Neck Tumor Multidisciplinary Team and were individualized according to patient age, tumor stage, primary subsite, and medical comorbidities. The surgical treatment group included patients receiving surgery only, surgery plus radiotherapy, or surgery plus chemoradiotherapy. The nonsurgical treatment group included patients receiving definitive radiotherapy and/or chemoradiotherapy.

All patients received clinical and radiographic examinations every 3 months in the first to third year, every 6 months in the fourth and fifth year, and annually thereafter. Patients were recorded as living and free of recurrence if disease-free status was confirmed on the date of the last visit. All patients were followed-up for a minimum of 36 months, or until an outcome of interest occurred.

HPV 16 DNA was detected using quantitative real-time PCR (qRT-PCR) with Rotor Gene 6000 and SYBR Premix Ex Taq (Perfect Real Time) (TaKaRa DRR063A). Primers and FAM-MGB-labeled TaqMan probes were designed and optimized to specifically amplify the HPV 16 E6 region. The HPV 16-positive cervical cancer cell lines CaSki and SiHa (ATCC-LGC-HTB-35) were used as positive controls and calibrators for the assay. The detection threshold for HPV-positive status was set, and samples were deemed positive if the threshold was met in duplicate runs.

Categorical data were reported as absolute numbers (n) with proportion (%). Groups were compared using Pearson’s χ2 test. Survival analysis was carried out using the Kaplan-Meier method and was compared to the log-rank test for equality of survival curves. Univariate analyses were performed with the unadjusted Cox proportional hazards model to calculate the hazard ratio (HR). Multivariate analyses were also performed using the Cox proportional hazards model to identify independent prognostic factors through backward elimination. PSM was carried out as described above. All statistical tests were two-tailed, and P values less than 0.05 were considered significant. Data were analyzed using SPSS (Windows version 22.0; Chicago, IL, USA). 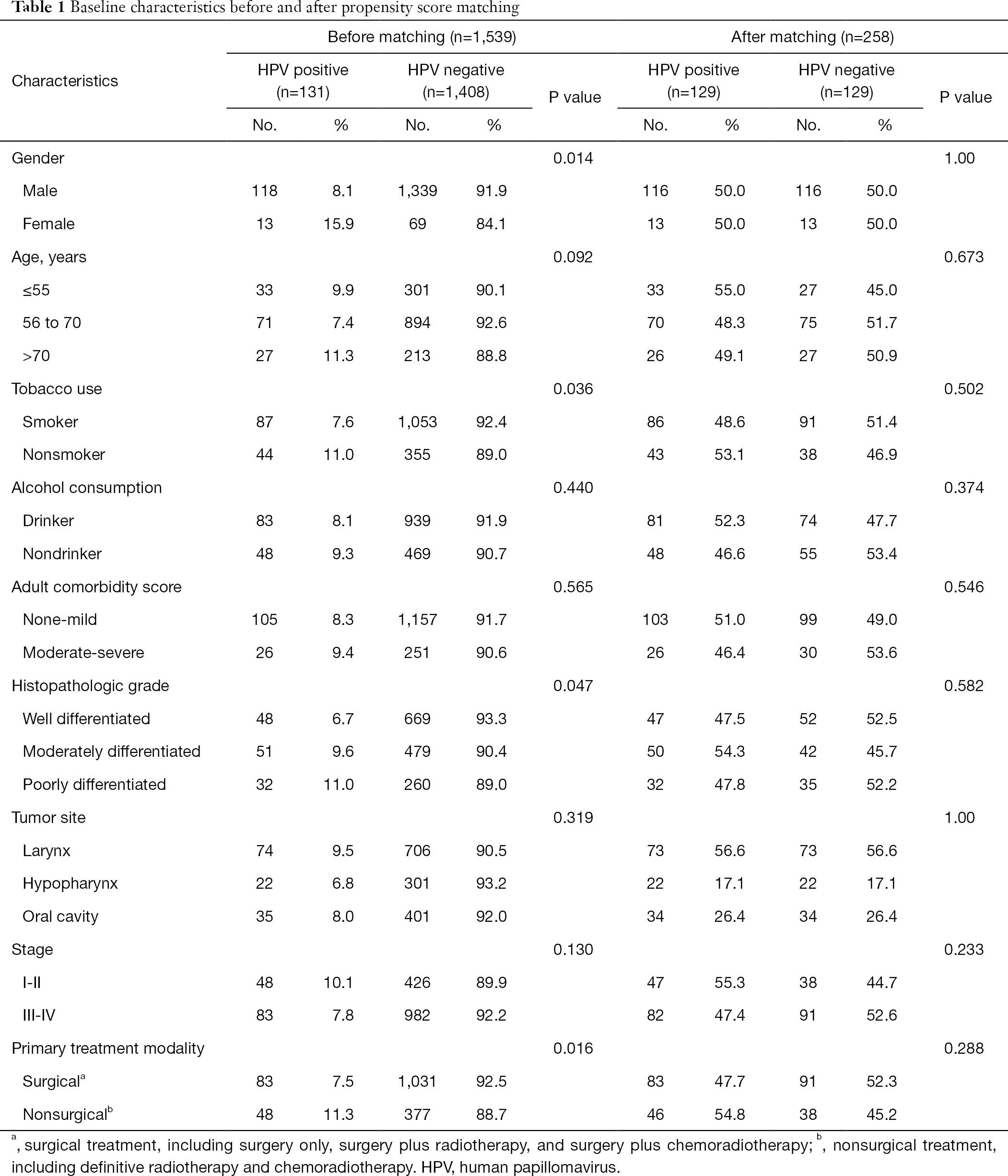 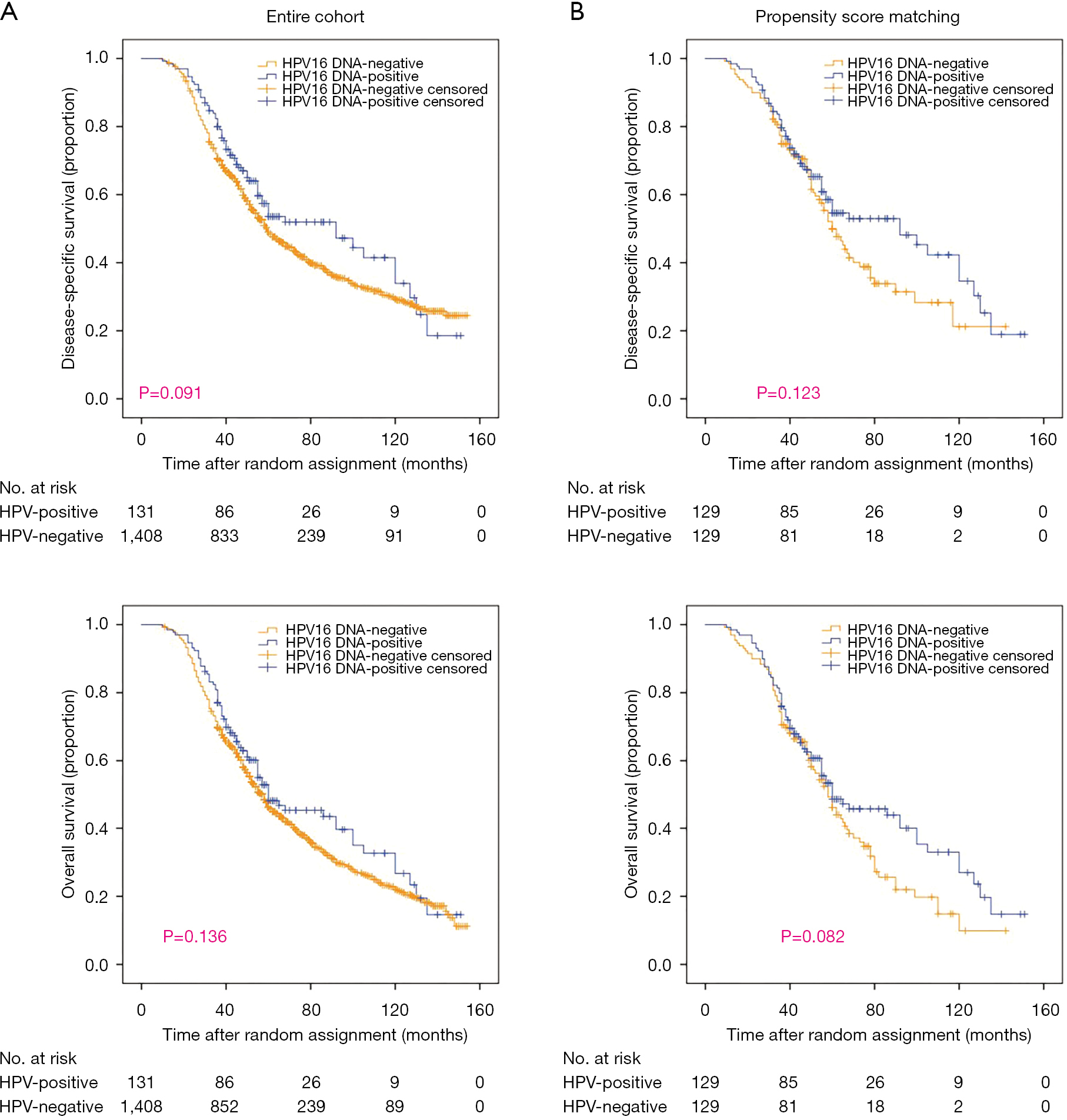 Figure 2 Disease-specific survival (DSS) and overall survival (OS) in HPV 16-positive and -negative non-OPSCC patients before (A) and after (B) propensity score matching. 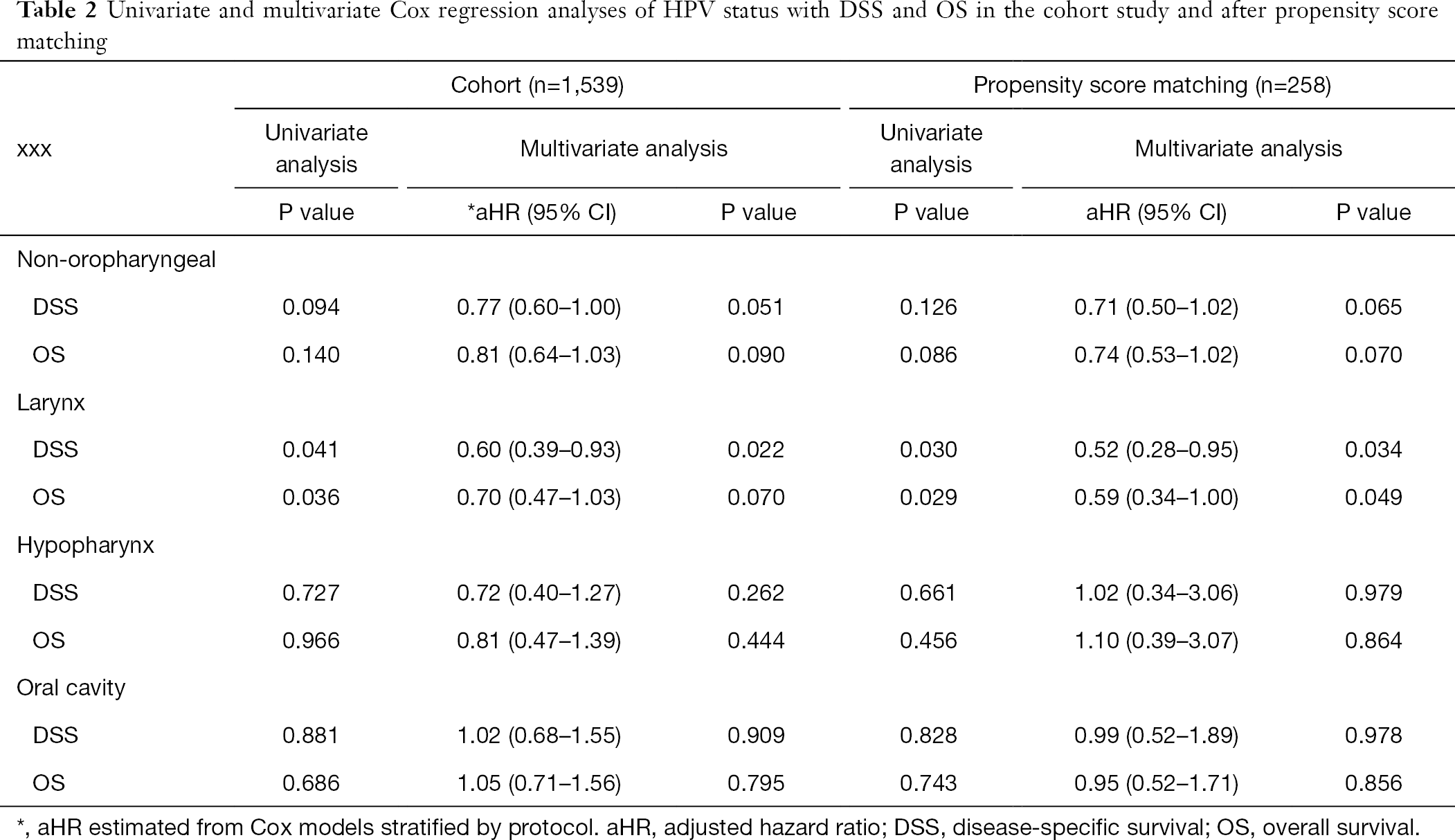 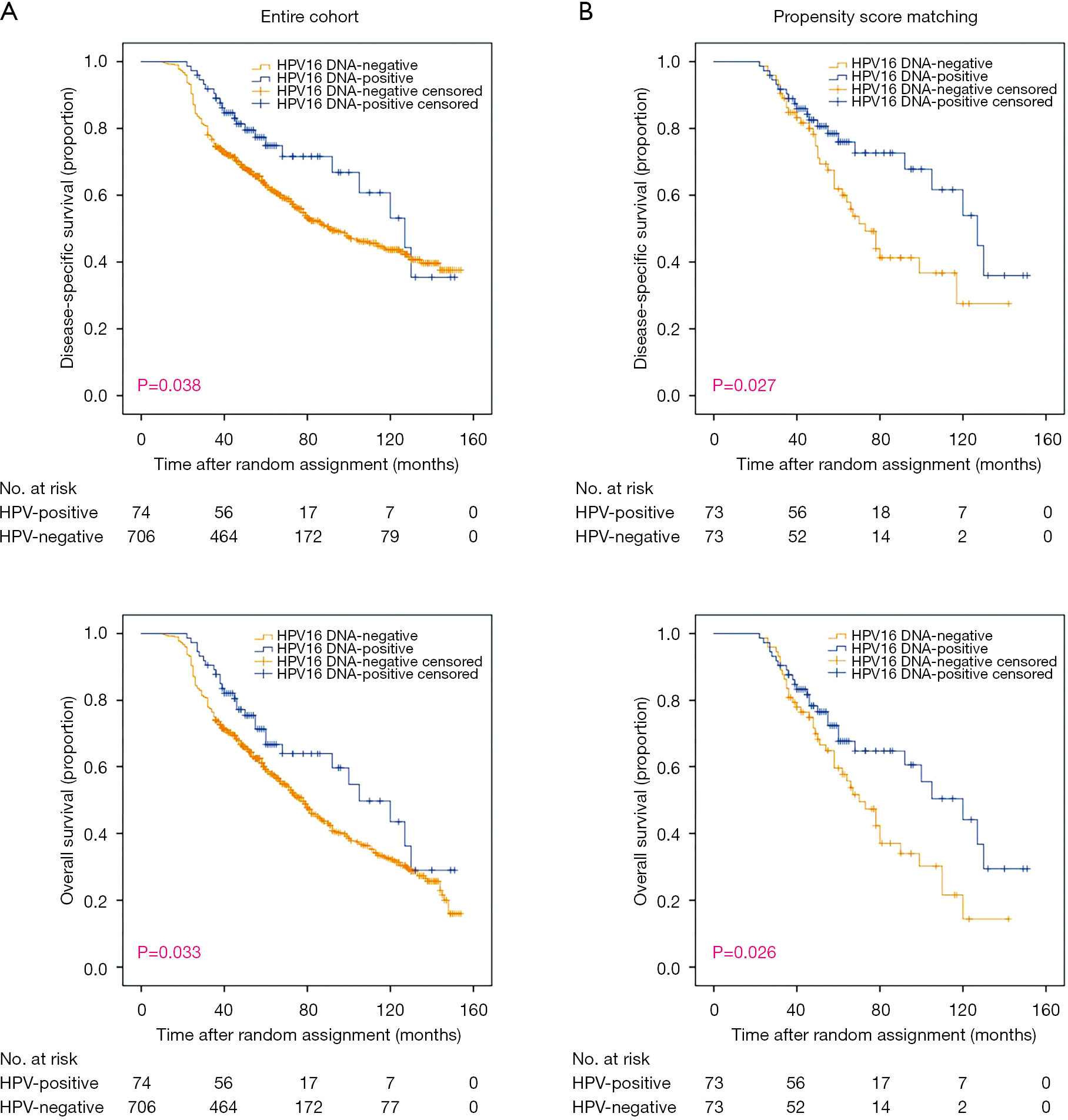 Figure 3 Disease-specific survival (DSS) and overall survival (OS) in HPV 16-positive and -negative LSCC patients before (A) and after (B) propensity score matching. 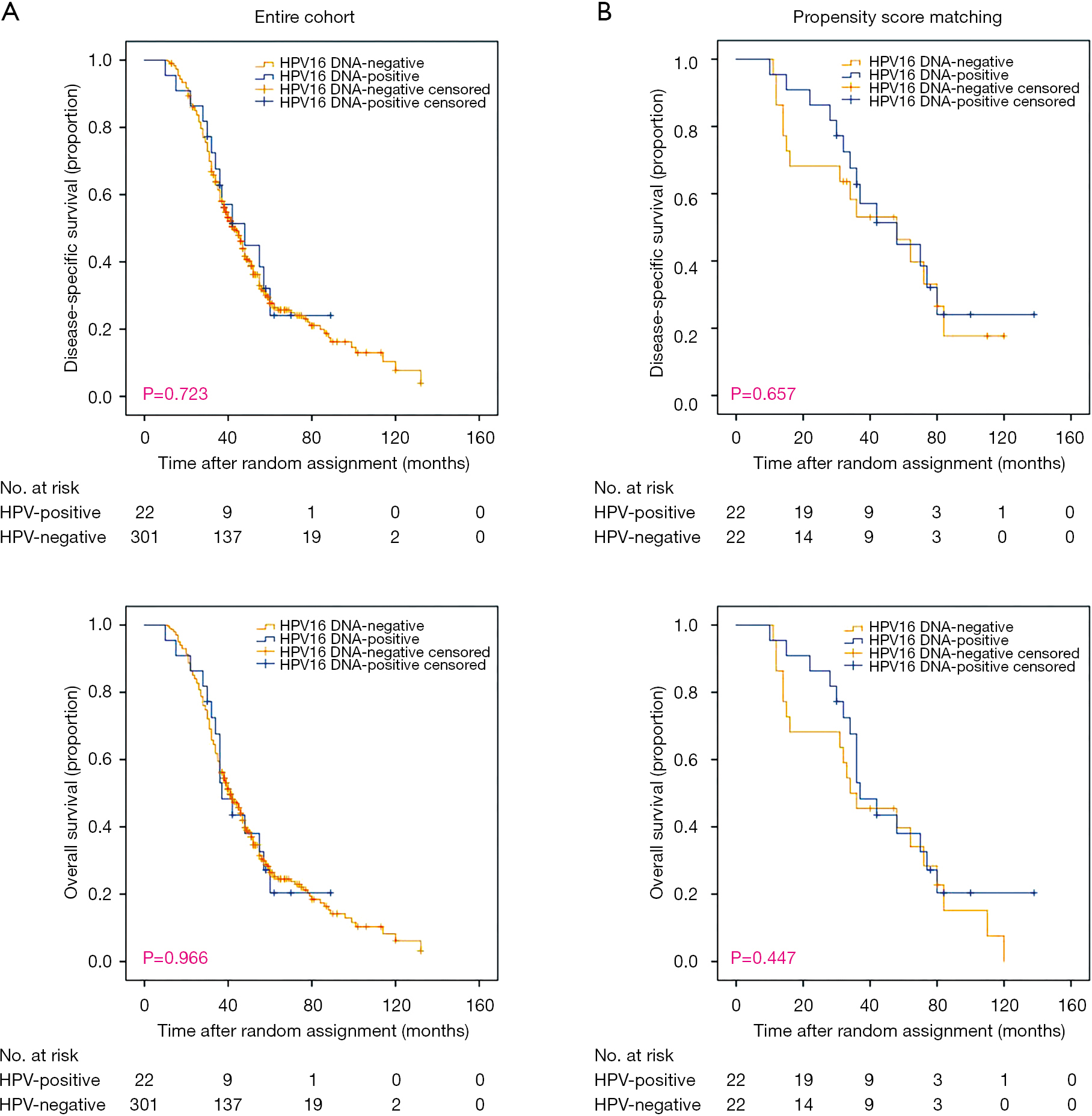 Figure 4 Disease-specific survival (DSS) and overall survival (OS) in HPV 16-positive and -negative HSCC patients before (A) and after (B) propensity score matching. 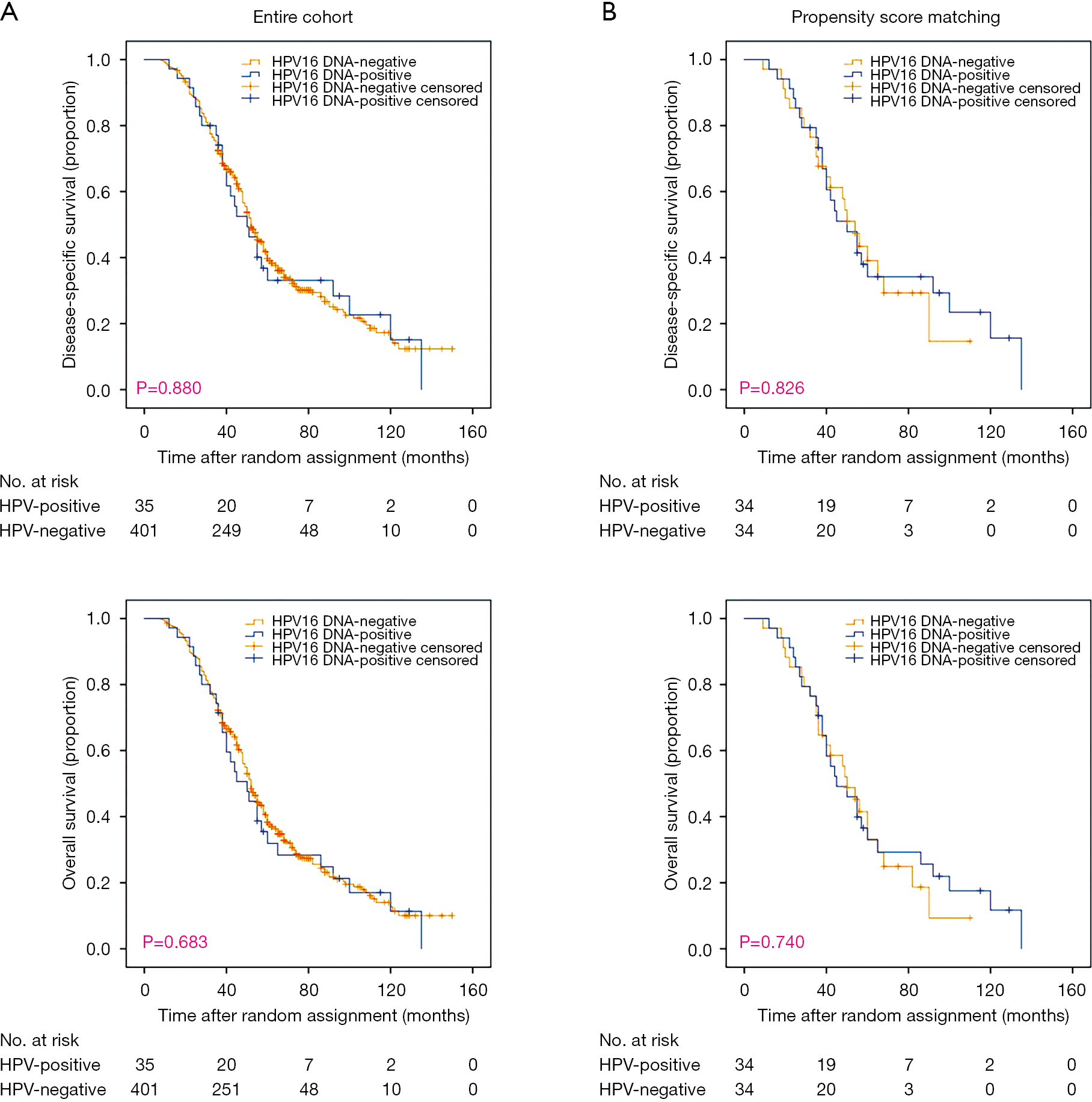 Figure 5 Disease-specific survival (DSS) and overall survival (OS) in HPV 16-positive and -negative OCSCC patients before (A) and after (B) propensity score matching.

In this study, we investigated the association between HPV status and survival outcomes in a large cohort of patients with non-OPSCC. The prevalence of HPV 16 in this cohort was 8.51%, which was comparable to previous studies. Some studies reported HPV detection rates of up to 30% (10). This variability may be due to the use of alternate detection methods or differences between study populations.

PSM has been increasingly used as a statistical tool in observational studies. Clinical and demographic patient characteristics can be balanced between groups, thus mimicking randomized controlled trial design (19). The present study is the first to use both Cox regression and propensity scoring methods to compare survival outcomes between HPV-positive and HPV-negative patients with non-OPSCC by adjusting for possible confounding factors. We chose to perform both PSM and adjusted Cox regression analysis due to limitations of both methods. Some authors have suggested that PSM outperforms standard multivariable methods (20). For our purposes, the advantages of one method did not outweigh the other; therefore, both methods were utilized.

In contrast to the strong prognostic role of HPV 16 status in OPSCC, here we show that patients with HPV 16-positive non-OPSCC had improved OS and DSS, but these improvements were not statistically significant. These findings are consistent with a similar study of 297 non-OPSCC cases, which showed that patients with HPV-positive tumors did not have significantly better progression-free survival (PFS) (HR: 0.77; 95% CI: 0.44–1.33, P=0.35) or OS (HR: 0.64; 95% CI: 0.34–1.21, P=0.17) compared to patients with HPV-negative tumors (15). Similarly, Fakhry et al., evaluated a retrospective, multi-institutional cohort and found no significant association between HPV status and survival in non-OPSCC patients (HR: 1.18; 95% CI: 0.69–2.01) (21). In contrast, a study by Nelson et al., showed that high-risk HPV status (indicated by seropositivity for HPV 16 E6 and E7) was associated with improved OS in oral cavity squamous cell carcinoma (OCSCC) (HR: 0.45; 95% CI: 0.25–0.70) and LSCC (HR: 0.29; 95% CI: 0.25–0.70) (22). This discrepancy may be due to the use of serology for identifying HPV 16 E6 and E7, as opposed to examination of fresh-frozen or FFPE tumor specimens. Additionally, the tumor suppressor protein p16 has shown a similar prognostic role for OS in both non-OPSCC (HR: 0.41; 95% CI: 0.25–0.69) and OPSCC (HR: 0.53; 95% CI: 0.40–0.71) (16). A very recent study of HPV-status in non-oropharyngeal tumors from the National Cancer Date Base (NCDB) found that HPV-status offered better OS for HPSCC and American Joint Committee on Cancer (AJCC) stage III to stage IVB LSCC and OCSCC (23). However, this large cohort study gathered data from 11 researches, which included different populations and used varied test method of high-risk HPV, and might cause some discrepancy from our findings.

Multivariate analysis and PSM identified HPV 16 status as an independent prognostic factor for survival in LSCC patients. These data are consistent with a previous study of 318 early stage LSCC cases, which showed that patients with HPV-positive tumors had significantly improved OS (P=0.038) and RFS (P=0.006) compared to patients with HPV-negative tumors (24). Two additional studies found that HPV-positive LSCC patients had improved survival outcomes compared to HPV-negative patients, although these differences were not statistically significant (25,26). In contrast, Young et al., found no statistically significant association between HPV RNA in situ hybridization status and OS in 80 patients with LSCC (27).

Survival outcomes based on HPV status in the oral cavity and hypopharynx vary between studies. Dahm et al., found that HPV status was not a significant factor in OS for patients with hypopharyngeal squamous cell carcinoma (HSCC) (HR: 0.53; 95% CI: 0.14–1.35, P=0.175) (28). Lai et al., found no difference in OS (P=0.541) or disease-free survival (P=0.723) between HPV-positive and HPV-negative OCSCC patients (29). In contrast, a study based on data obtained from the National Cancer Database (NCDB) found that HPV-positive status was associated with improved survival outcomes for the oral cavity (HR: 0.76; 95% CI: 0.66–0.87) and hypopharynx (HR: 0.59; 95% CI: 0.45–0.77) (30). In the present study, no significant differences in OS or DSS were observed in either OCSCC or HPSCC patients, even after multivariate Cox regression and propensity score-adjusted analyses for bias reduction. A relatively small sample size and low HPV prevalence in OCSCC and HSCC patients may have introduced bias in our results. Further studies with larger cohorts containing a single tumor site are needed to verify these findings.

Several limitations of this study should be noted. First, this study was performed at a single institution, which may impact the generalization of our results. Second, other high-risk HPV types were not evaluated. Finally, HPV detection was not performed by E6/E7 mRNA qRT-PCR, which is the generally accepted standard for determining transcriptionally active HPV status (31). Because of these limitations, the relationship between HPV status and survival outcomes in non-OPSCC patients should be explored with prospective multi-institutional studies.

Funding: This work was supported by the National Natural Science Foundation of China (grant number 81273173).

Ethical Statement: The authors are accountable for all aspects of the work in ensuring that questions related to the accuracy or integrity of any part of the work are appropriately investigated and resolved. The Peking Union Medical College Hospital (PUMCH) Ethics Committee approved this study protocol. All participants provided informed written consent.