Breast cancer has become the second most common cause of mortality and morbidity in women all over the world (1). Breast cancers have many subtypes, but there are three main ones: ER+, HER2+ and triple-negative breast cancer (TNBC) (2). TNBC is a very aggressive cell type with a poor prognosis. Understanding the molecular mechanism of TNBC malignancy should allow researchers to identify new effective drug targets.

Gangliosides are very important in the development (3), differentiation (4,5) and proliferation (6) of cells. Ganglioside D3 (GD3) and ganglioside D2 (GD2) are strongly expressed in neuroectoderm-derived cancers and thought to be important in the malignant transformation of tumor cells (7). The expression profiles of gangliosides in the development and transformation of many cancers have been determined (8,9). GD3 is highly expressed in malignant melanomas (10,11) where it can be used as a biomarker of human melanoma (12) since it is only expressed at low levels in normal melanocytes (13). GD2 is overexpressed in melanomas and small cell lung cancers where it increases the growth and invasiveness of cells (14). GD2 was used as a biomarker of breast stem cells (15) and mesenchymal stem cells (16).

GD3 synthase (GD3s) is one of six members of the ST8Sia subfamily of sialyltransferases (ST8Sia I-VI), also known as ST8SIA1. GD2 and GD3 are highly expressed in many malignant cancers (17-19) and GD3s is the only enzyme that is responsible for biosynthesis of GD2 and GD3 (20). GD3s plays a very important role in the development of cancers (21,22), but the signaling pathways involved in GD3s activity in breast cancers like TNBC have not been fully delineated.

In this study, we explored the expression of GD3s in cells and tissues of different types of breast cancer and found higher GD3s levels in ER− breast cancers than in ER+ breast cancers and a negative correlation with the signature of luminal breast cancer. GD3s overexpression in TNBCs was associated with hypomethylation of the synthase gene, ST8SIA1, and resulted in increased proliferation, invasion, migration and colony formation of cell. Inhibition of GD3s reduced proliferation, invasion, migration and colony formation of cell. Clinically, a lower GD3s expression was clearly associated with relapse-free survival (RFS) and increased overall survival (OS) of breast cancer patients.

The human breast cancer cell lines, MCF-7, MDA-MB-468 and T47D, were purchased from the American Type Culture Collection. MCF-7 cells were cultured in DMEM, while MDA-MB-468 and T47D were cultured in RPMI 1640. Both mediums were supplemented with 10% fetal calf serum, 100 units/mL penicillin, and 100 µg/mL streptomycin at 37 °C in a humidified incubator containing 5% CO2.

Cell proliferation was assessed by MTT [3-(4,5-dimethylthiazol-2-yl)-2,5­diphenyltetrazolium] assay (Sigma-Aldrich, St. Louis, MO, USA). The colony formation assay in soft agar was carried out in six-well culture plates. After 2–3 weeks, the colony were stained with 5 mg/mL MTT and the number was counted. Each experiment was done in triplicate.

About 1×104 cells were seeded on top of the Boyden chamber inserts (BD Biosciences, San Jose, CA, USA) and 10% fetal calf serum was used as the chemoattractant. To reduce the effect of cell proliferation, mitomycin C was added to the cells to a final concentration of 2 µg/mL. Cells that had migrated through the membrane onto the lower surface of the inserts were stained with 1% crystal violet and counted in four randomly selected fields using a microscope. For invasion assays, inserts were coated with a thin layer of Matrigel basement membrane matrix. The subsequent steps in the invasion assay were the same as those of the migration assay.

The Oncomine database (www.oncomine.org) is very useful for investigating genes that are expressed in multiple cancer datasets to validate the relationship between transcription and disease. More advanced analyses were used to check gene expression in a small fraction of samples of a cancer type using different filters. The expression of GD3s mRNA was checked in the subtypes of breast cancers. The Cancer Genome Atlas (TCGA) was initiated by the National Cancer Institute (NCI) and the National Human Genome Research Institute (NHGRI) and can be utilized to study the molecular basis of cancer through the application of genome analysis technologies. The cBioPortal for Cancer Genomics (http://www.cbioportal.org/) provides many different cancer data sets, such as sequencing data, microarray data, RNA-Seq data, etc. The cBioPortal can also be used to assess the effects of co-expression of genes. There is a data set of 1,881 breast tumor samples and a 51-sample breast cancer cell line set available in GOBO (http://co.bmc.lu.se/gobo). Many different analyses can be performed using these data sets, which were all from Affymetrix U133A microarrays. The mRNA expression of specific genes in cancers can be easily checked in GOBO. The association between gene expression and patient outcomes can also be determined by using the GOBO dataset. The website (https://genome-cancer.ucsc.edu/proj/site/hgHeatmap/) was used to assess the methylation of genes in different cancers from TCGA data.

Total RNA (1 µg) was extracted from breast cancer cell lines and used for cDNA synthesis according to the manufacturer’s instructions. (Qiagen, Hilden, Germany). The cDNA was added to PCR mixture that contained 1X SYBR Green PCR master mix (Quanta Biosciences, Gaithersburg, MD) and 300 nmol/L gene-specific GD3s primers (AuGCT). The assays were carried out three times on a CFX thermocycler (Bio-Rad, Hercules, CA). The primers are given in Table 1.

Genomic DNA was extracted from MCF-7 and T47D breast cancer cells (1×106) using a QIAamp DNA Mini Kit (Qiagen, Hilden, Germany) according to the manufacturer’s protocol. The bisulfite DNA modification was performed according to the manufacturer’s instructions and the methylation level of the ST8SIA1 gene was determined by qMS-PCR using two primer sets, one designed for methylated (M) DNA and the other for unmethylated (U) DNA. The primers for the methylation-specific PCR and unmethylated-specific PCR of the ST8SIA1 gene (Table 2) were designed using Urogene’s MethPrimer software: (http://www.urogene.org/cgi-bin/methprimer/methprimer.cgi).

IHC was carried out on five-micron sections from PEAT specimens. Expression of GD3s protein was measured using polyclonal anti-GD3s rabbit antibody (No. HPA026775, Sigma-Aldrich, St. Louis, MO, USA) at a dilution of 1:200. Slides were deparaffinized, then rehydrated and washed in 1X PBS. Antigen retrieval was done with citrate buffer (Sigma-Aldrich) at 100 °C for 10 min. After antigen retrieval, slides were incubated in 3% H2O2 (Sigma-Aldrich) to block endogenous peroxidase at room temperature. The GD3s antibody was added to the slides, which were incubated overnight at 4 °C, followed by 1 h incubation with biotinylated second Ab. Staining was done with diaminobenzidine (Vectastain, Burlingame, CA, USA) and cells were counterstained with hematoxylin (Sigma-Aldrich). The negative controls were treated with rabbit serum alone (Santa Cruz Biotechnology, Dallas, TX, USA). A Nikon Eclipse Ti microscope was used to take photograph of stained sections and staining density was analyzed by Image J software (http://rsbweb.nih.gov/ij/).

The results are given as mean ± SD. Statistical significance between different group was assessed by Student’s t-test. A P<0.05 was considered to be statistically significant. 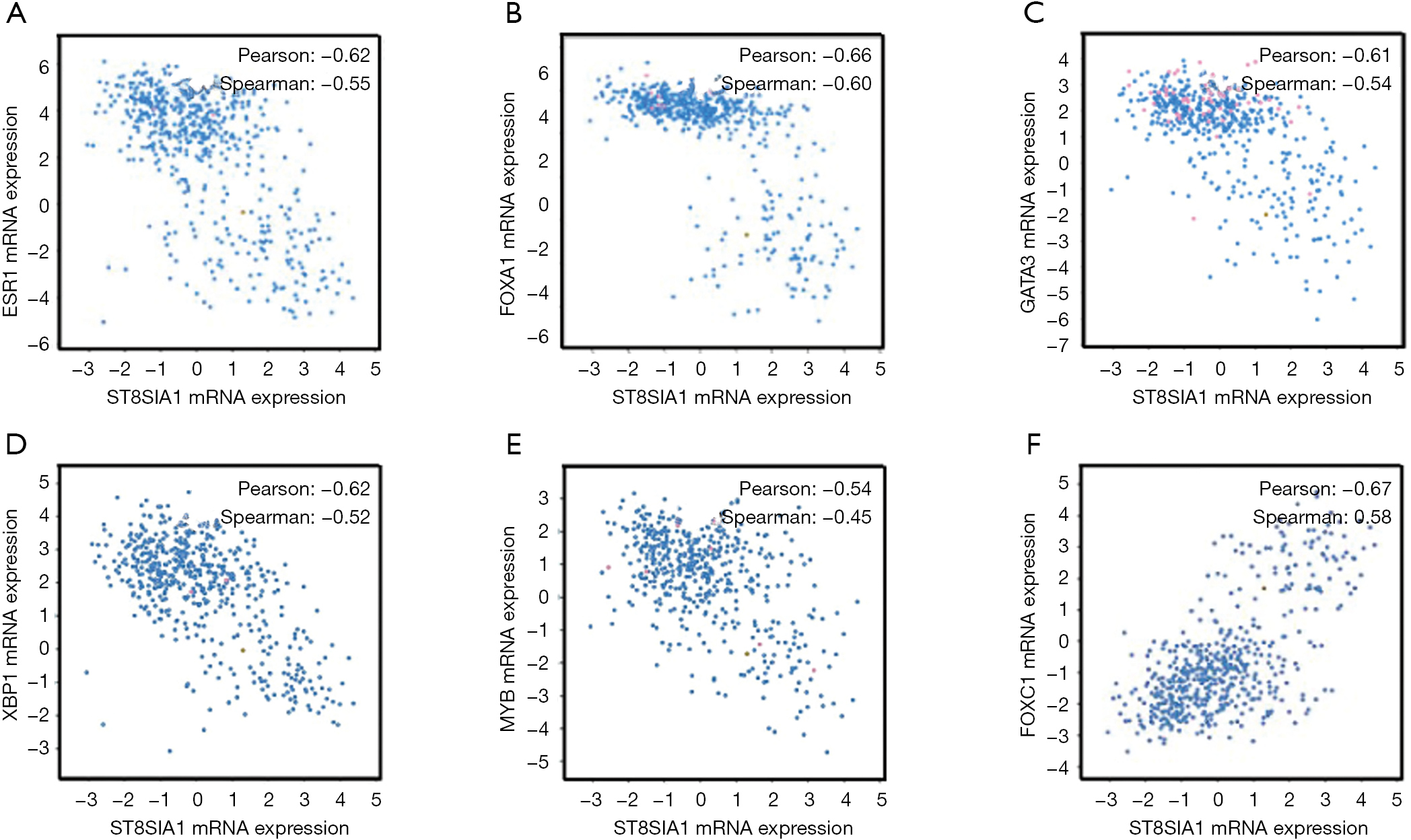 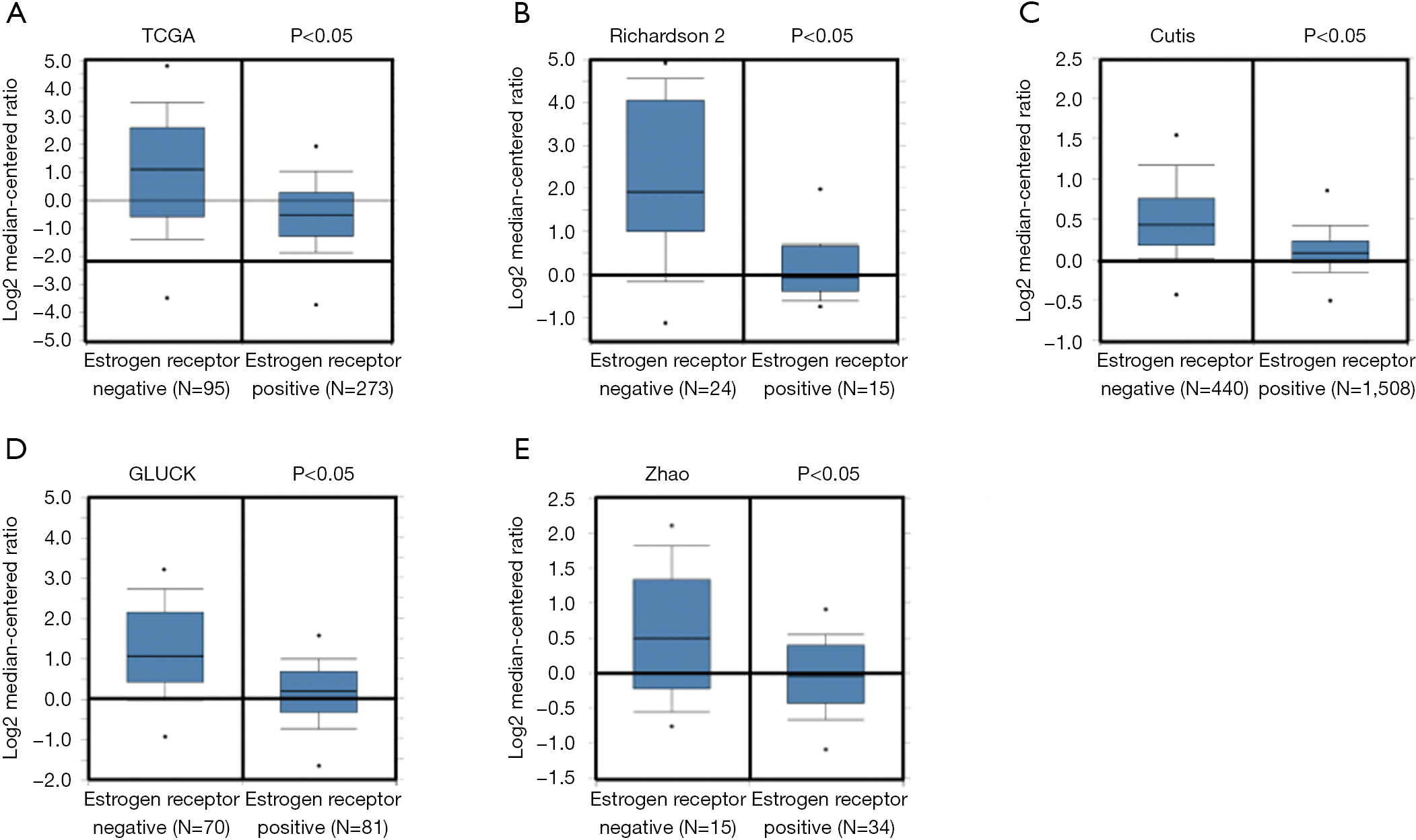 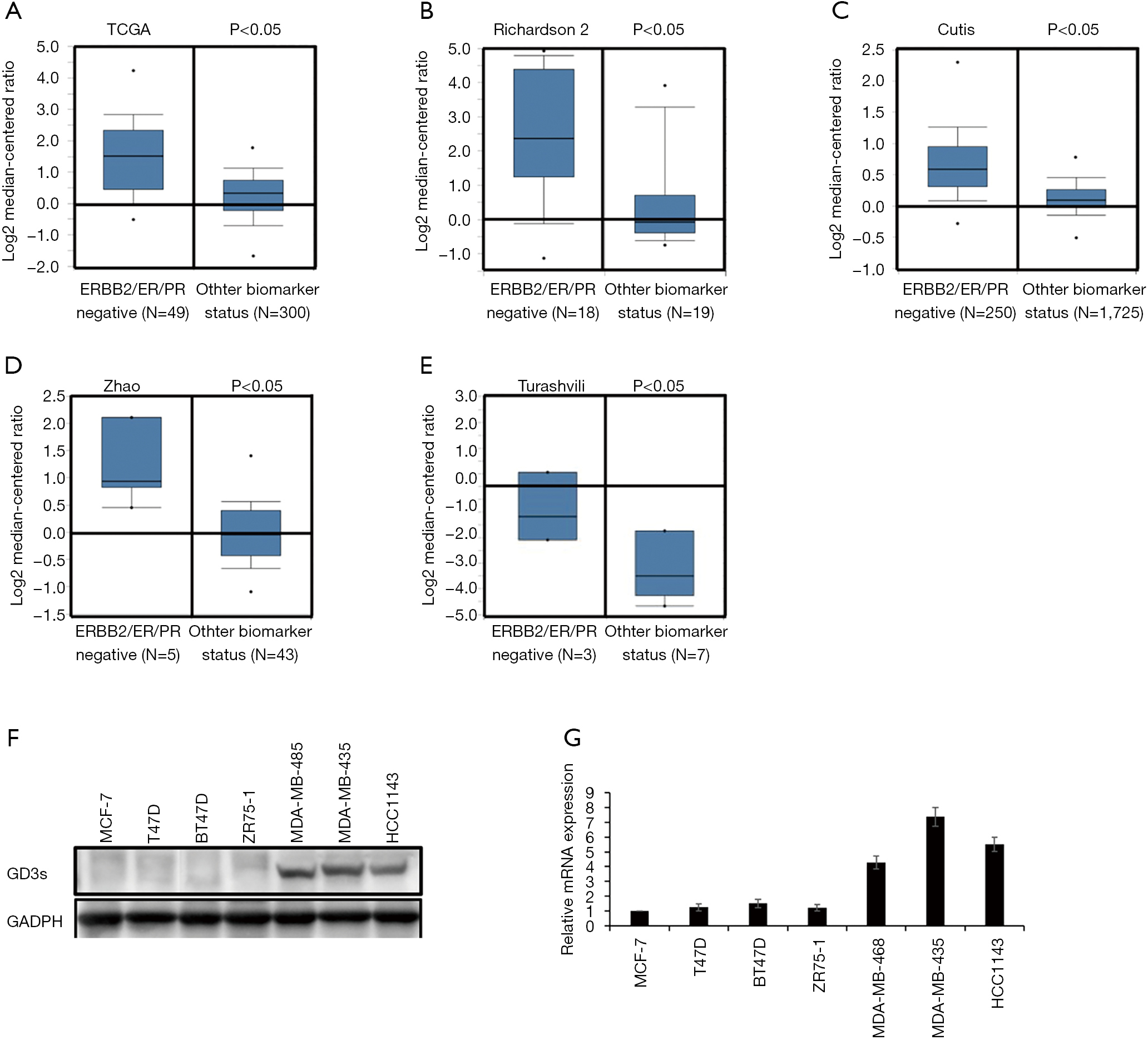 To investigate the functional roles of GD3s in breast cancer, MCF-7 cells which normally have low GD3s expression were transfected with a GD3s expression plasmid. The MDA-MB-468 cell line, which normally has high GD3s expression, was transfected with GD3s shRNA that blocks transcription of the GD3s gene. Controls (cntl) were empty vector for MCF-7 and control shRNA for the MDA cell line. MCF-7-cntl, MCF-7-GD3s, MDA-MB-468-cntl, and MDA-MB-468-shRNA were tested for cell proliferation, migration, invasion and colony formation. Overexpression of GD3s promoted proliferation, invasion, migration and colony formation, whereas knockdown of GD3s inhibited these functions (Figure 4). 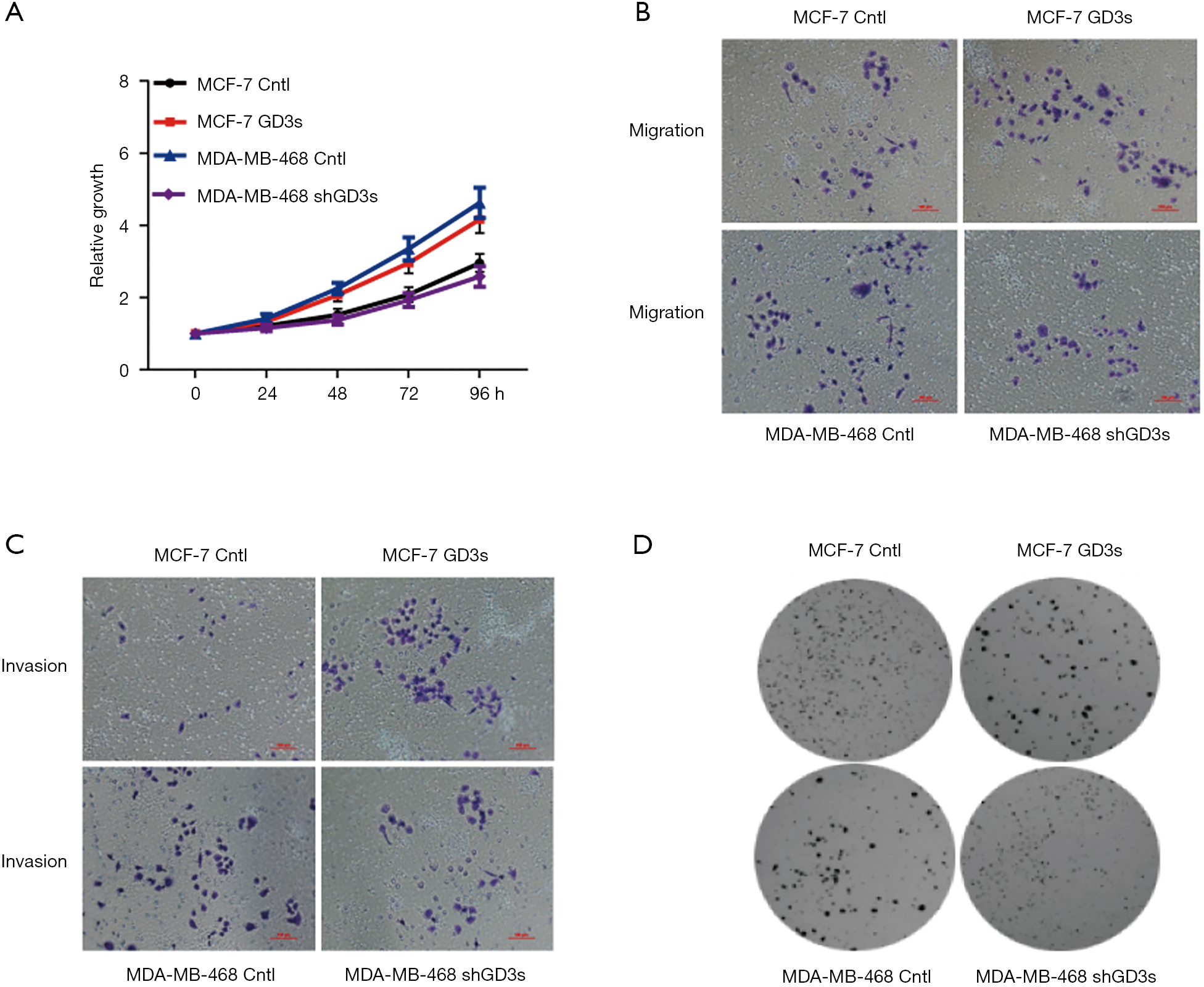 GD3s expression was associated with methylation of the ST8SIA1 gene 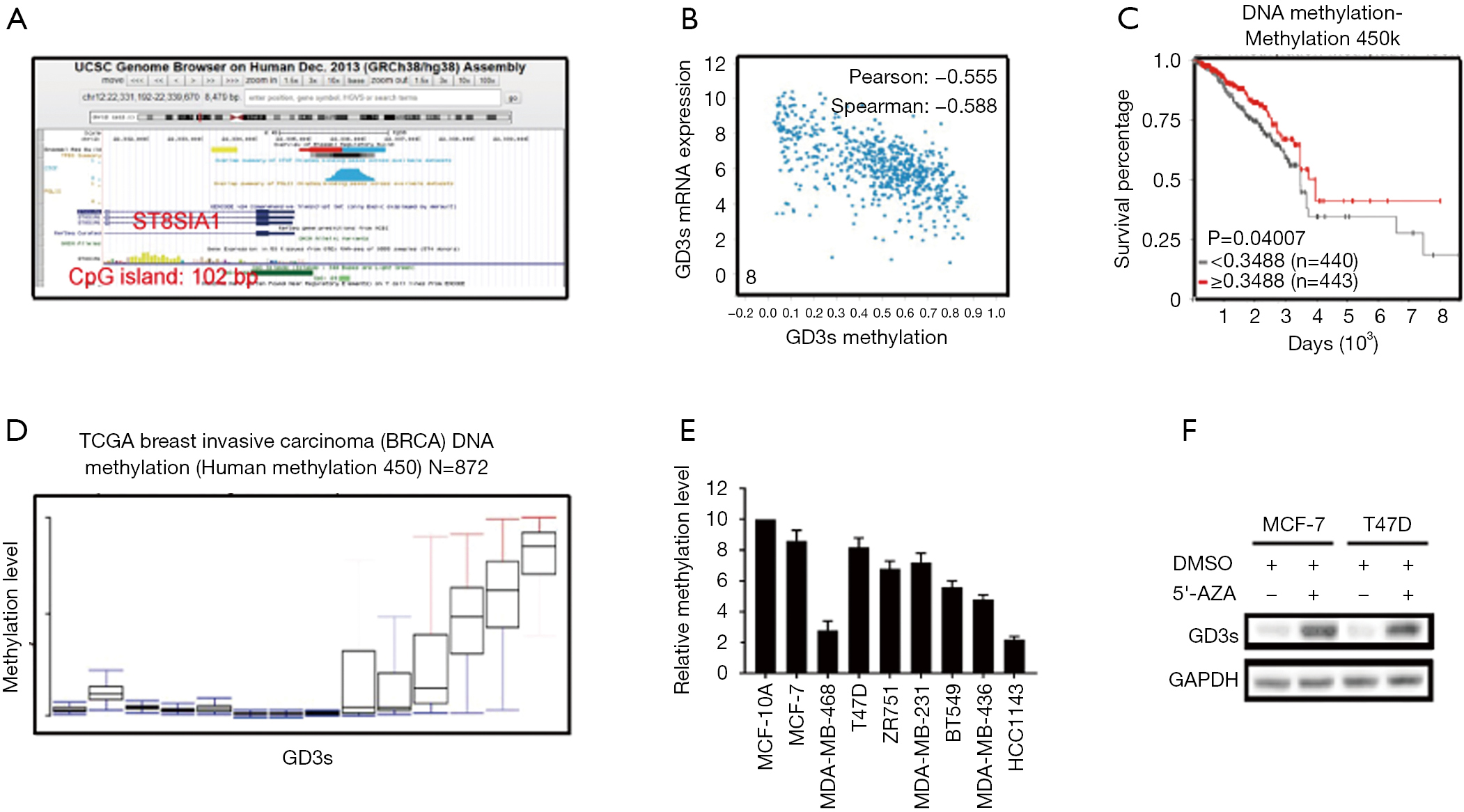 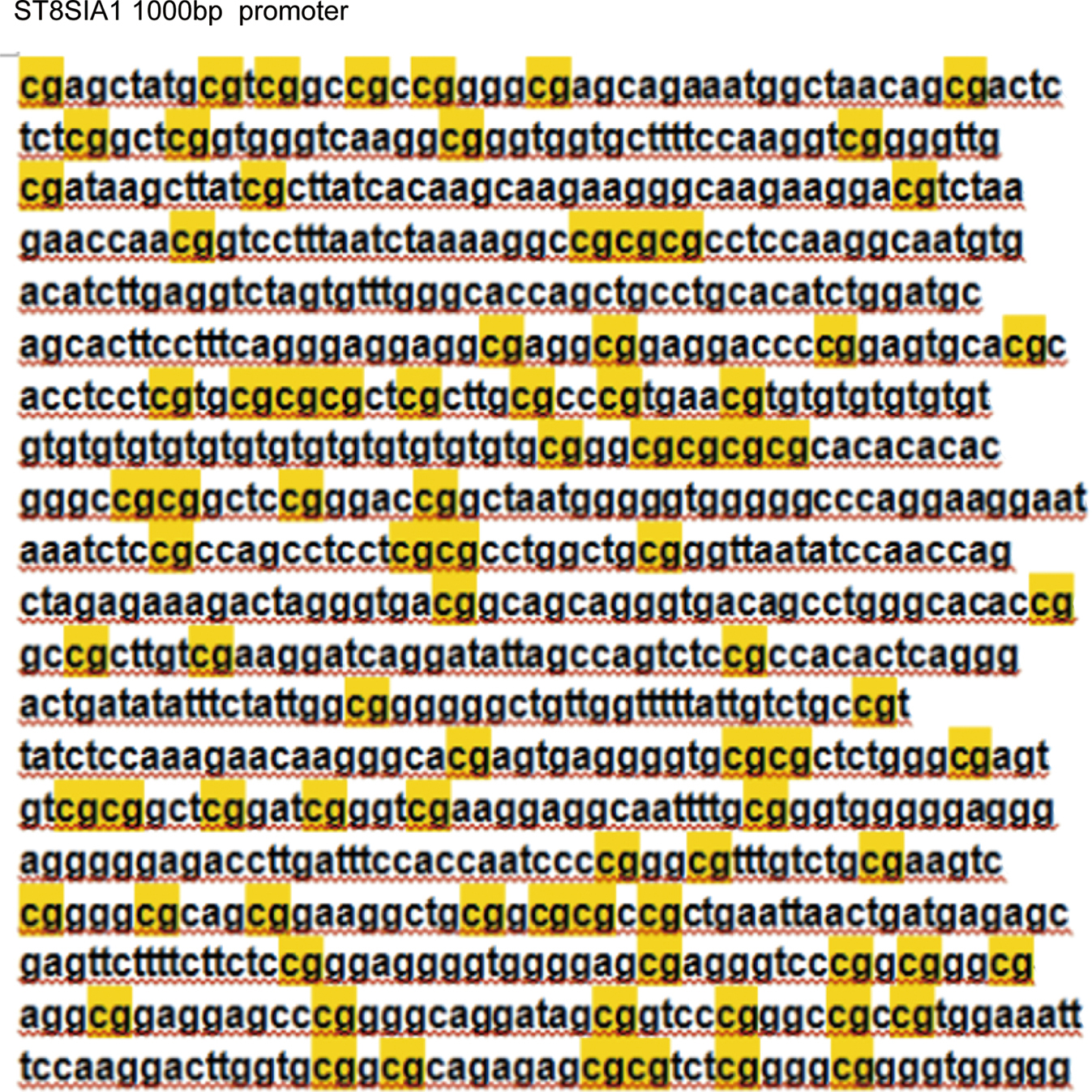 IHC was performed to determine if TNBCs had greater GD3s protein levels than estrogen- or progesterone-receptor-positive luminal breast cancers. Results showed that staining density of GD3s was significantly higher in TNBCs compared to luminal breast cancers (Figure 6A,B). To ascertain whether expression of GD3s affected the survival of patients with breast cancer, Kaplan Meier analyses were carried out. It was shown that patients with high GD3s had lower survival rates, while patients with low GD3s had higher survival rates (Figure 6C). Results from an in silico assay confirmed the survival data (Figure 6D) and showed that low GD3s expression was significantly associated with RFS of breast cancer patients (Figure S2).

Figure S2 Expression of GD3s is significantly associated with relapse-free survival in patients with breast cancer. 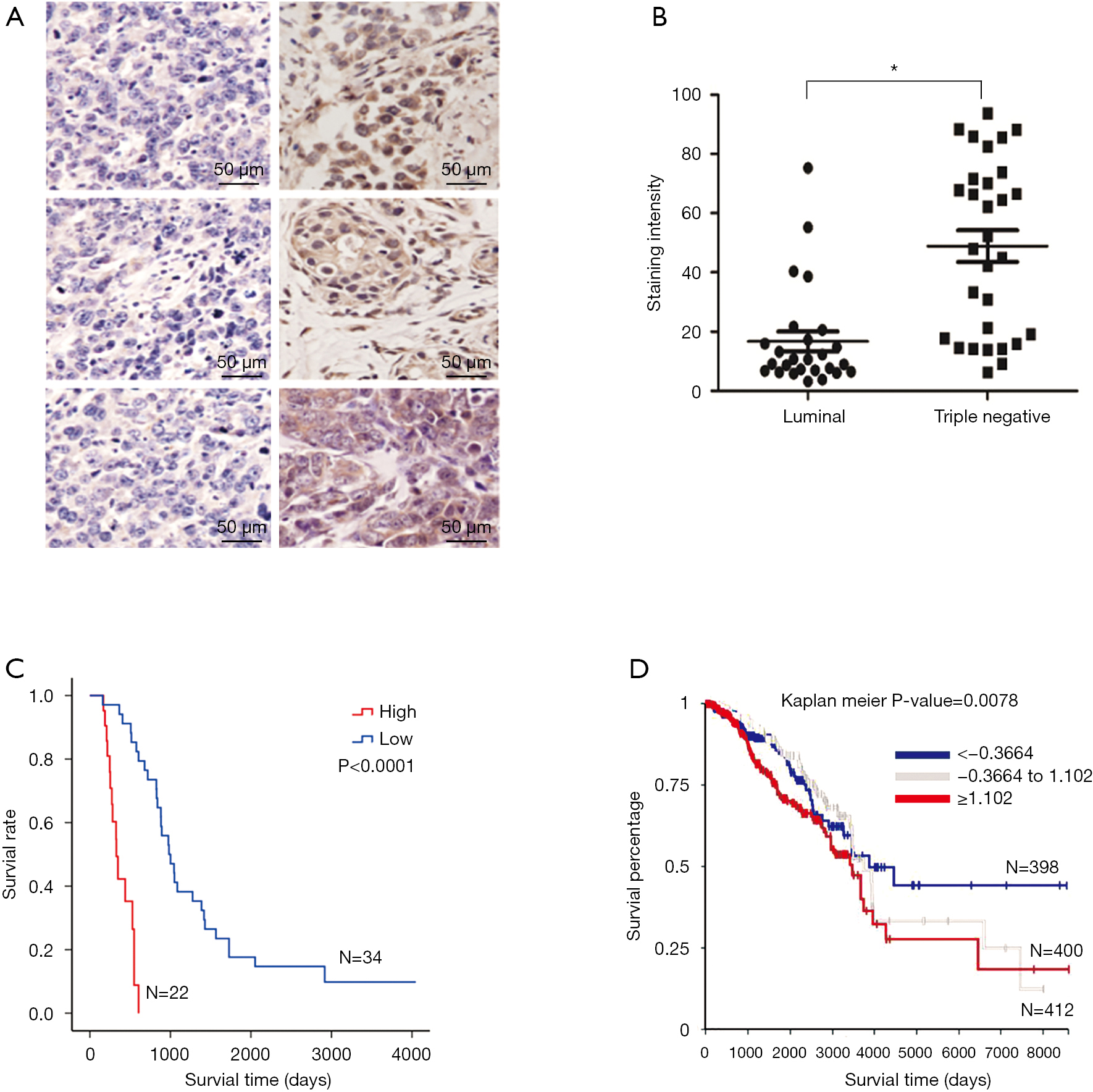 Breast cancers are commonly classified into three subtypes, ER+, HER2+ and TNBC (2). TNBC has the worst prognosis. Up to now, there has been no drug specifically targeting TNBC and the molecular mechanisms controlling TNBC’s malignancy were unclear. Here, we reported that the ganglioside synthase, GD3s, was associated with luminal breast cancer and highly expressed in ER− tumors and TNBC. Expression of GD3s was regulated by methylation of the synthase gene, ST8SIA1 and promoted the proliferation, migration invasion and colony formation of cancer cells. In terms of survival, higher expression levels of GD3s were significantly associated with lower RFS and lower OS of breast cancer patients.

TNBC patients have a poor prognosis and lower OS compared to patients with luminal breast cancer. This may be a result of GD3s over-expression that increases cell proliferation, migration, invasion and colony formation of tumor cells. Higher GD3s expression was first noted in patients with lower rates of OS, relapse-free survival, and distant metastasis-free survival of all breast cancers at grade 3 (Figures S3-S5). GD3s may be used as a biomarker for staging breast cancers and as a potential drug target in the future. 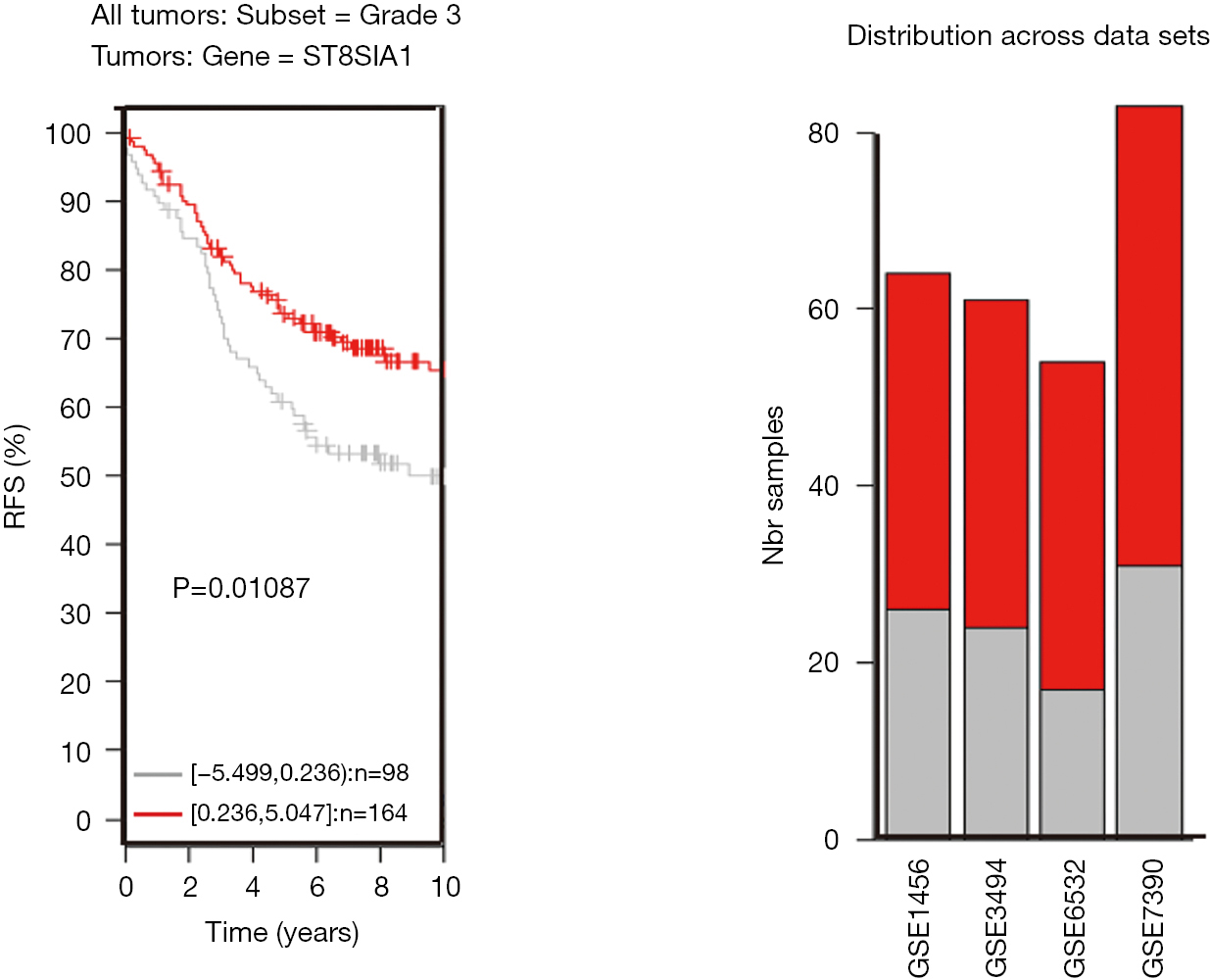 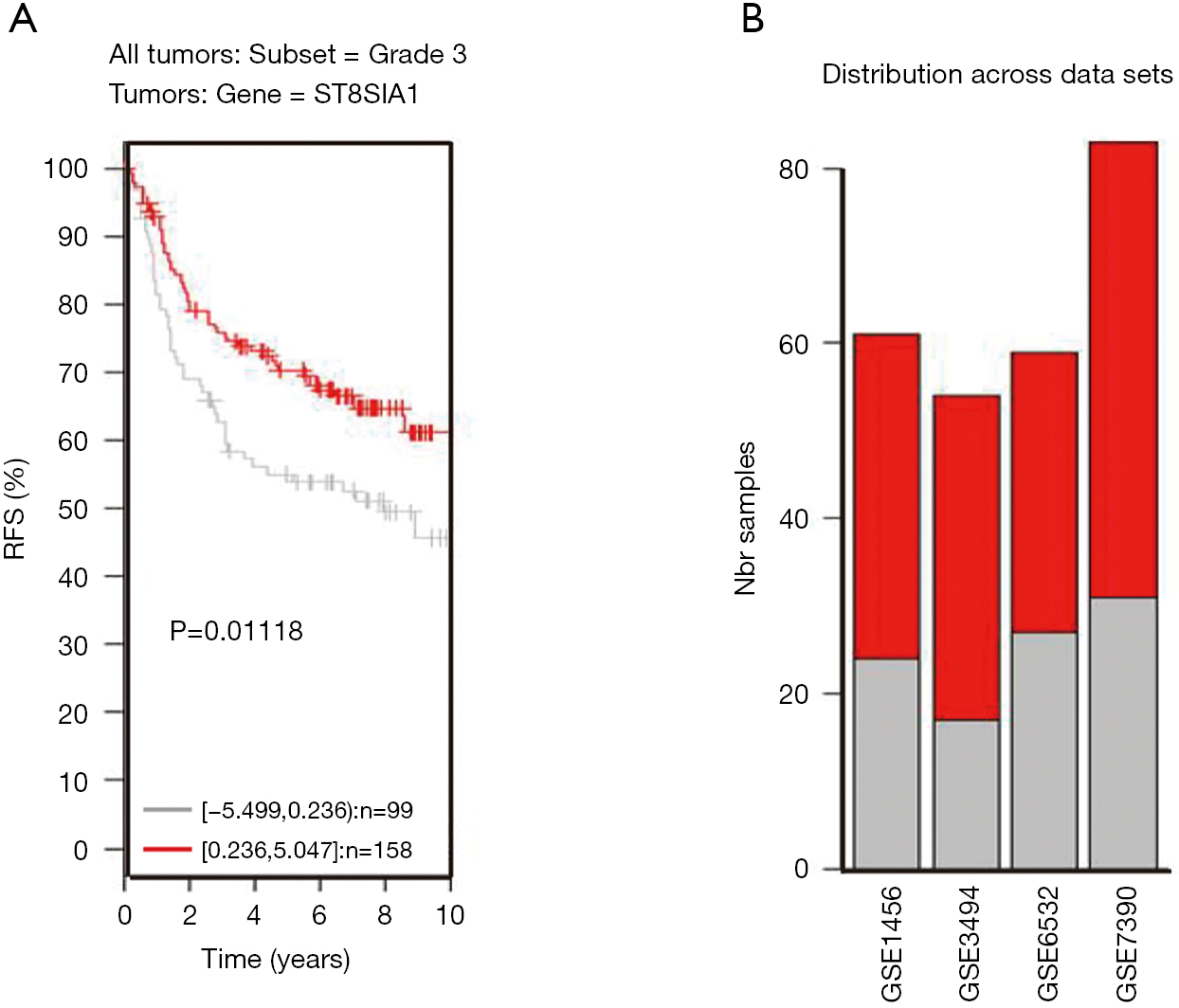 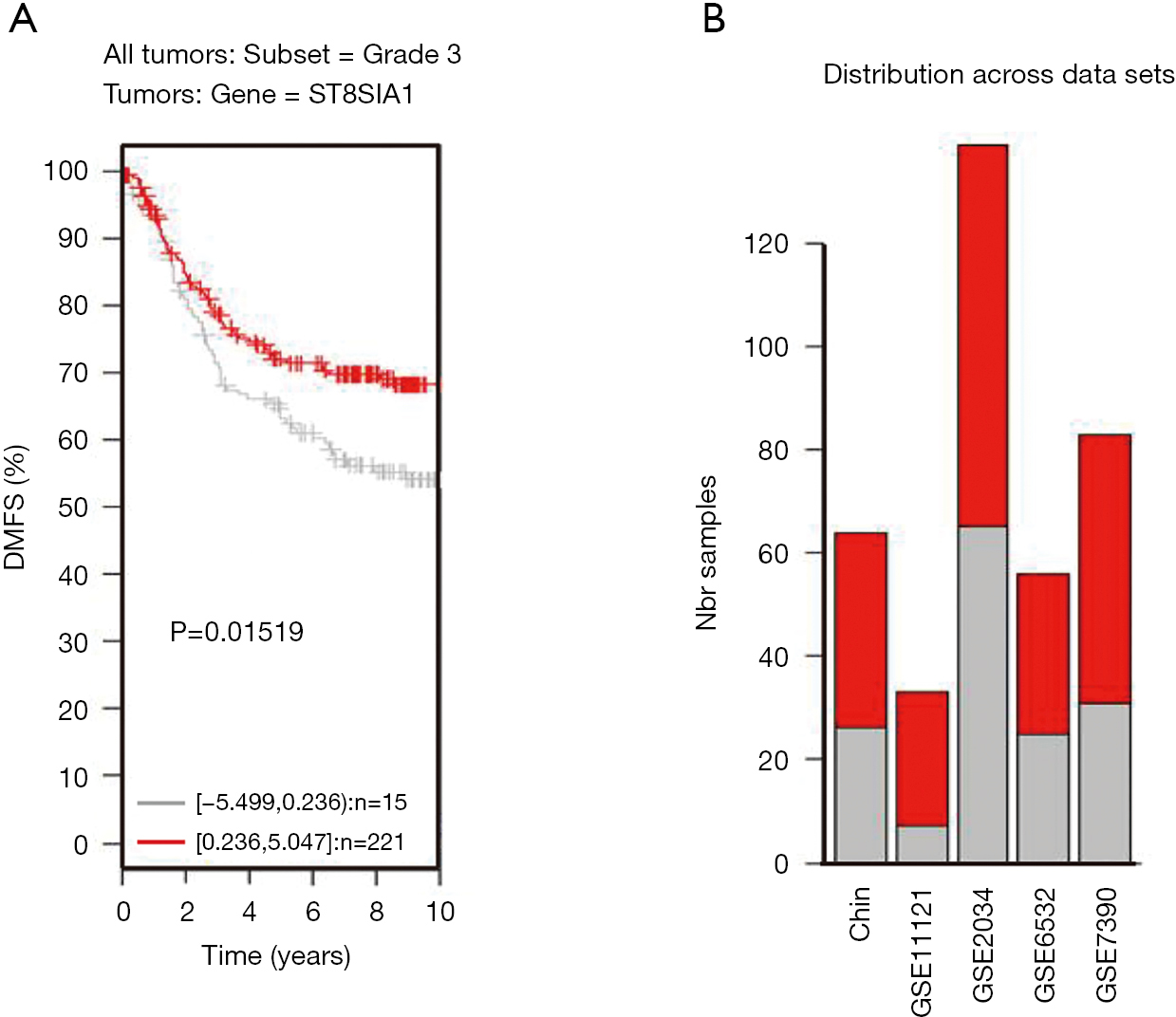 Ethical Statement: The authors are accountable for all aspects of the work in ensuring that questions related to the accuracy or integrity of any part of the work are appropriately investigated and resolved. The Institutional Review Board at the John Wayne Cancer Institute/Saint John Health Center Providence Health System, Santa Monica, CA, approved the use of human tissues (MORD-RTPCR-0095).