This study aims to analyze acute myeloid leukemia (AML); a group of genetically heterogeneous malignant clonal diseases that can block normal myeloid differentiation (1), as well as AML which is also the most common type of adult leukemia with the poorest prognosis.

Only in the United States of 2019, there have been 10,920 deaths, and 21,450 new cases of AML diagnosed (2). At present, induction therapy for AML is based primarily on cytotoxic drugs that enable complete remission (CR) in 70% of adult patients (3). However, the likelihood of the recurrence rate in AML patients is still high, especially in older patients with prognosis of having high-risk factors. Yet, the long-term cure rate was lower in the absence of allogeneic hematopoietic stem cell transplantation (Allo-HCT) in adult AML patients with first complete remission (CR1) (4).

With the emergence of various molecular targeted therapies for AML in the last two years, there are now several new drugs and other clinical trials currently underway; however, there is not enough data to know which newly approved drugs should be chosen or in which order or combination they should be used in (2). New early diagnostic biomarkers and therapeutic targets are therefore urgently needed to improve the diagnosis and risk management of AML in order to reduce the mortality rate of AML.

Epigenetic modifications include a class of heritable non-genetic changes in gene expression, usually including DNA methylation, histone modifications, and chromatin remodeling (5). In healthy hematopoietic stem cells, epigenetic processes play a key role in cell differentiation and hematopoiesis (6). Among them, DNA methylation affects the function of key genes. It is closely related to tumors by silencing tumor suppressor genes and activating oncogenes by high/low methylation (7). Abnormal DNA methylation is considered a hallmark of AML and is considered a powerful epigenetic marker in early diagnosis, prognosis prediction, and treatment decision making (8).

In this study, we performed a comprehensive analysis of DNA methylation and gene expression to identify key epigenetic genes in AML. The methylation genes and differential genes of AML patients and normal individuals were downloaded from the GEO database. After data preprocessing, we identified differential genes between tumors and normal samples and performed KEGG and GO analyses on these genes. Protein-protein interaction (PPI) network construction and module analysis were then performed, and the highest-scoring modules were screened. SurvExpress software and analyzed the genes to be assigned the highest-scoring module with a P value <0.05 were selected to perform survival analysis and risk assessment in the cancer dataset. Finally, MethSurv analyzed the three genes screened by SurvExpress software to explore methylation biomarkers associated with AML survival. 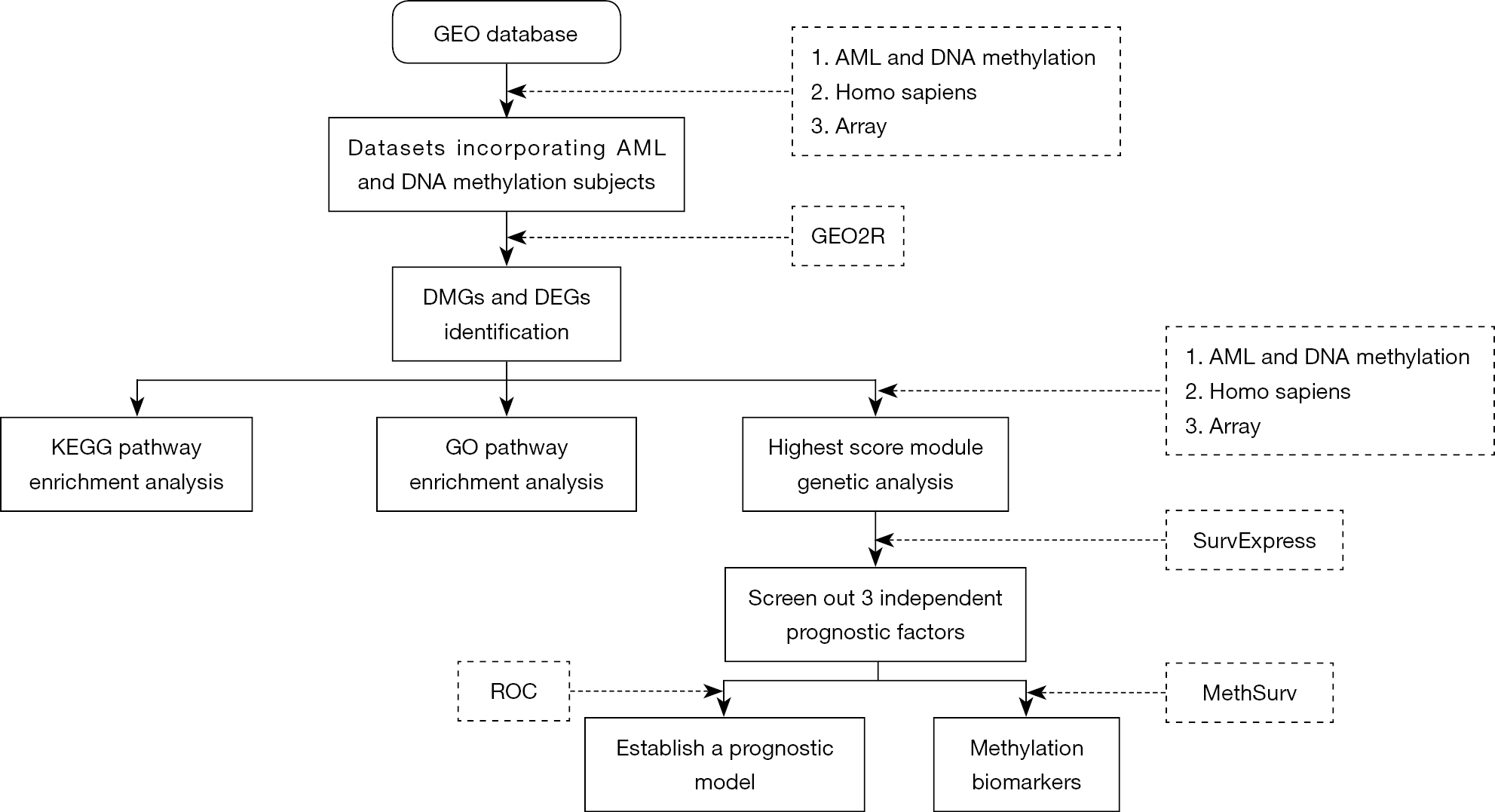 GEO provides users with a useful tool called GEO2R that can be used to analyze microarray data. GRO2R (https://www.ncbi.nlm.nih.gov/geo/geo2r/) were used to analyze gene expression in GSE114868 and GSE63409. Gene expression (GSE114868) and methylation (GSE63409) data set genes were considered statistically significant as |t| ≥2.0 and adj P<0.01. Then, we identified hypomethylated/upregulated genes via overlapping the hypomethylated and overexpression gene lists and identified hypermethylated/downregulated genes via overlapping the hypermethylated and low-expression gene lists. Finally, Then, we use the Venn diagram network tool to draw the Venn diagram. (http://bioinformatics.psb.ugent.be/webtools/Venn/).

The Kyoto Encyclopedia of Genes and Genomes (KEGG) is a database resource for understanding high-level functions and utilities of the biological system from molecular-level information. The Gene Ontology (GO) could be used to perform enrichment analysis. We used DAVID (https://david.ncifcrf.gov/) to make KEGG pathway analysis and GO enrichment analysis, including Biological Process, Cellular Component, and Molecular Function for the hypomethylated/upregulated genes and hypermethylated/downregulated genes.

PPI analysis is used to search core genes and gene modules related to carcinogenesis. In this study, the PPI network analysis of the hypomethylated/upregulated genes and hypermethylated/downregulated genes were performed using the search tool for the Retrieval of Interacting Genes (STRING) database. The interaction score was set at 0.7. Then, MCODE plugin in Cytoscape is used to find clusters with the degree cut-off, haircut on, k-core, node score cut-off, max depth set as 10, 0.2, 2, 0.2 and 100 in PPI network and the module with the highest score would be picked out to make survival analyses.

SurvExpress is a comprehensive gene expression database and web-based tool that uses biomarker gene lists as input to provide survival analysis and risk assessment in cancer data sets (24). We selected genes in the highest-scoring module of the hypermethylated low expression and low methylation high expression overlapping genes, respectively. The univariate Cox model was used to calculate the association between gene expression levels and patient overall survival (OS). When the P value was <0.05, its modular gene was used as an independent prognostic factor for patient survival. AML samples are divided into two groups: (I) high-risk group; (II) low-risk group. Survival analysis was performed by Kaplan-Meier survival plots, log-rank P value, and hazard ratio (HR, 95% confidence interval). By comparing the sensitivity and specificity of risk-based survival predictions, the accuracy of prognostic performance was assessed using ROC curves of patients over time, 10, 30, 50, and 70 months, respectively.

MethSurv is used to explore methylation biomarkers associated with the survival of various human cancers (25). MethSurv is freely available at https://biit.cs.ut.ee/methsurv. Through the MethSurv website, we will analyze the DNA methylation analysis of the selected AML-related genes in the TCGA database.

Identification of DEGs and DMGs in AML 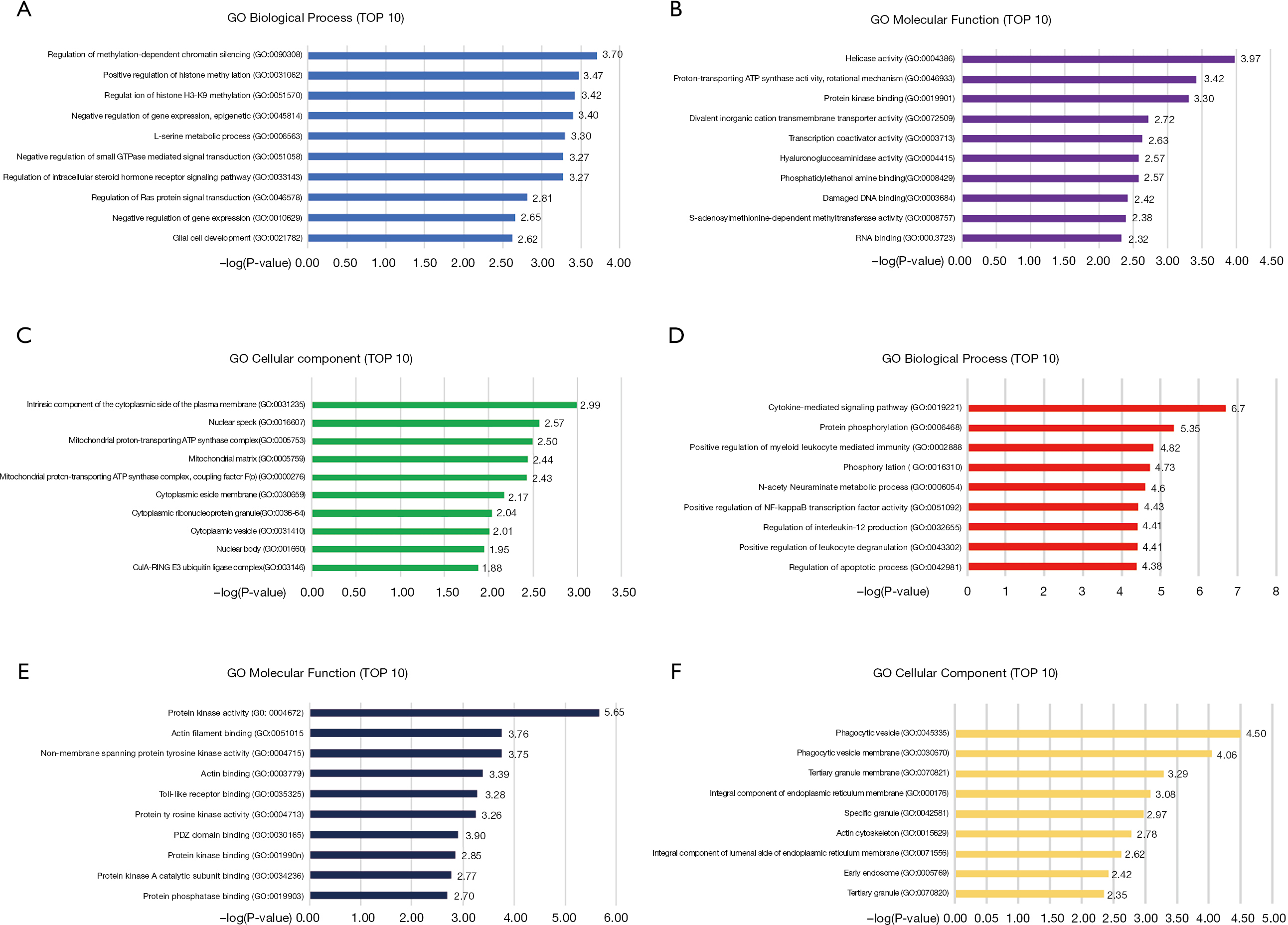 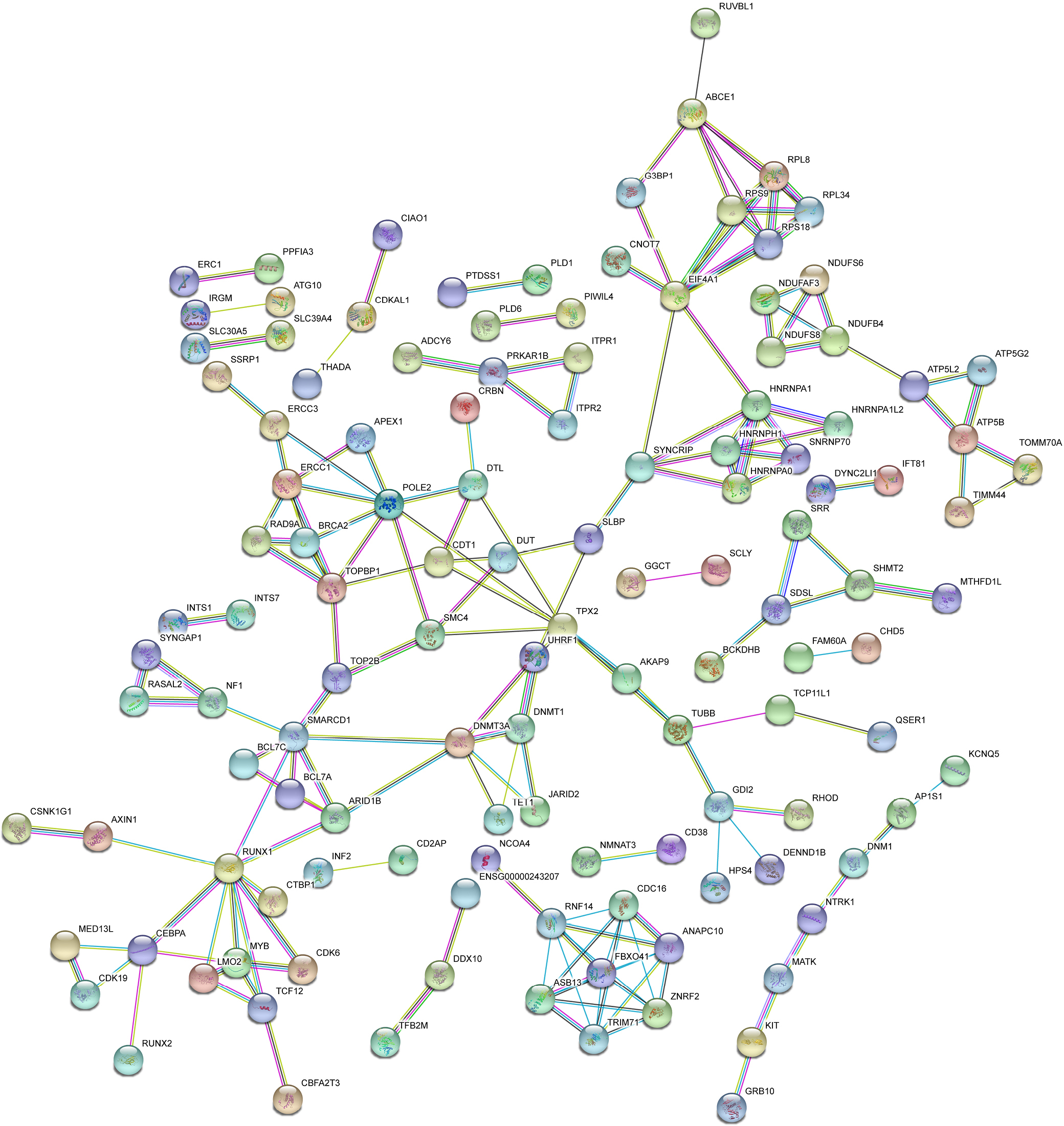 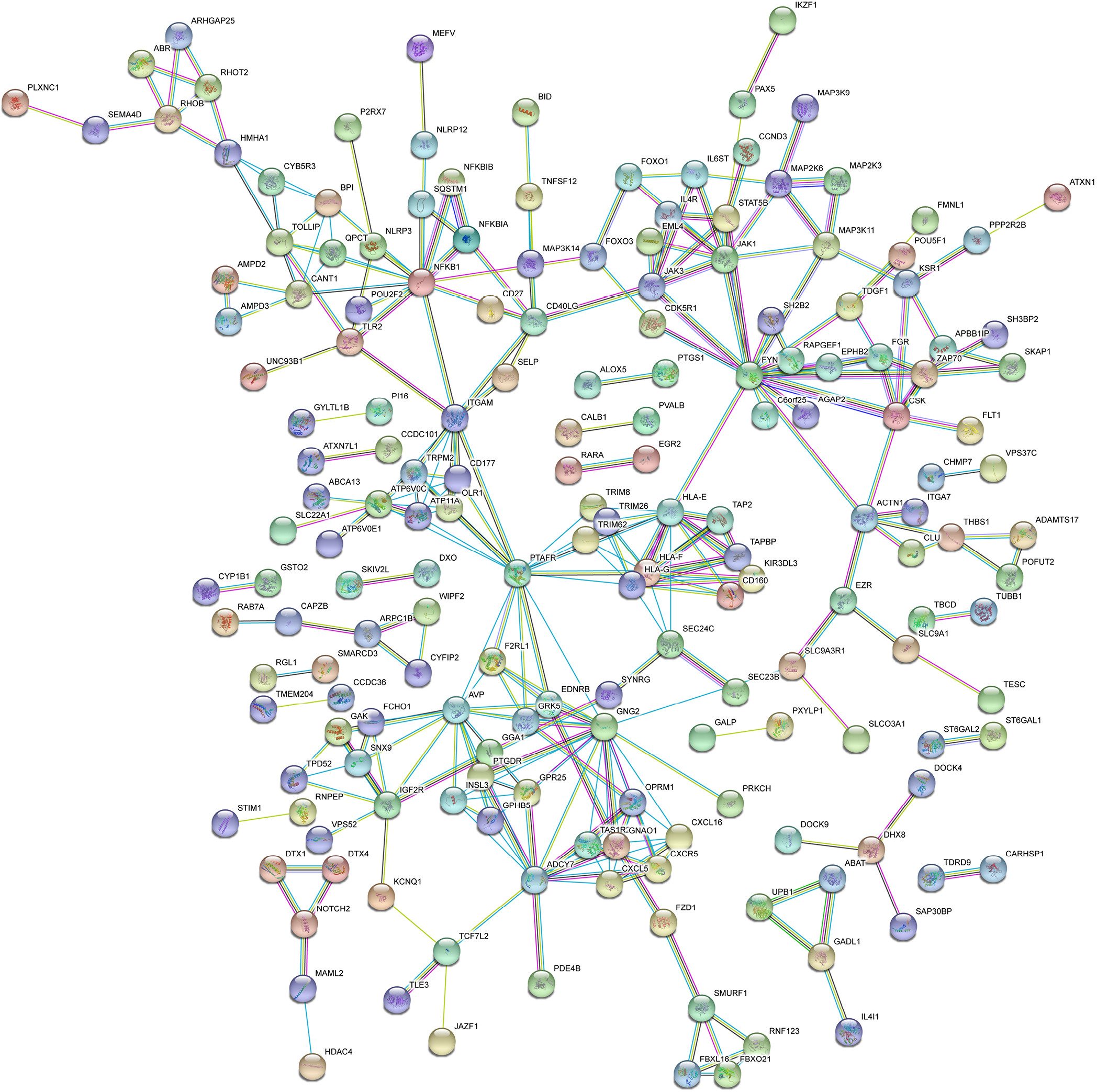 To assess whether the identified prognostic markers are valuable for predicting patient survival, we focused on the genes in the highest-scoring modules. We used SurvExpress software to analyze hypomethylated/upregulated, and hypermethylated/downregulated genes for univariate and multivariate Cox regression analysis. AML samples were divided into two groups: (I) high-risk group; (II) low-risk group. First, we performed the univariate Cox regression analysis of the highest-scoring module gene. The hypermethylation/downregulation gene module 1 has 20 genes, and the hypomethylation/upregulation gene module 1 contains 7 genes (Table 1). We screened for genes with P values <0.05 (ATP11A, ITGAM, ZNRF2). These three genes were then subjected to multivariate Cox regression analysis and found to have P values <0.05 (Table 2). The three genes were independent prognostic factors, and then we use three genes to establish a prognostic model (Figure 8A,B). The ROC curves assessed the accuracy of the prognostic model at 10, 30, 50, and 70 months (Figure 8C). These three genes were used to evaluate the prognosis of AML cytogenetic risk typing and cell morphological typing and found that these three genes differed in the intermediate/Normal and M2 prognostic analysis (Table 3). Finally, we show the expression levels and risk assessment of three key genes (Figure 8D). 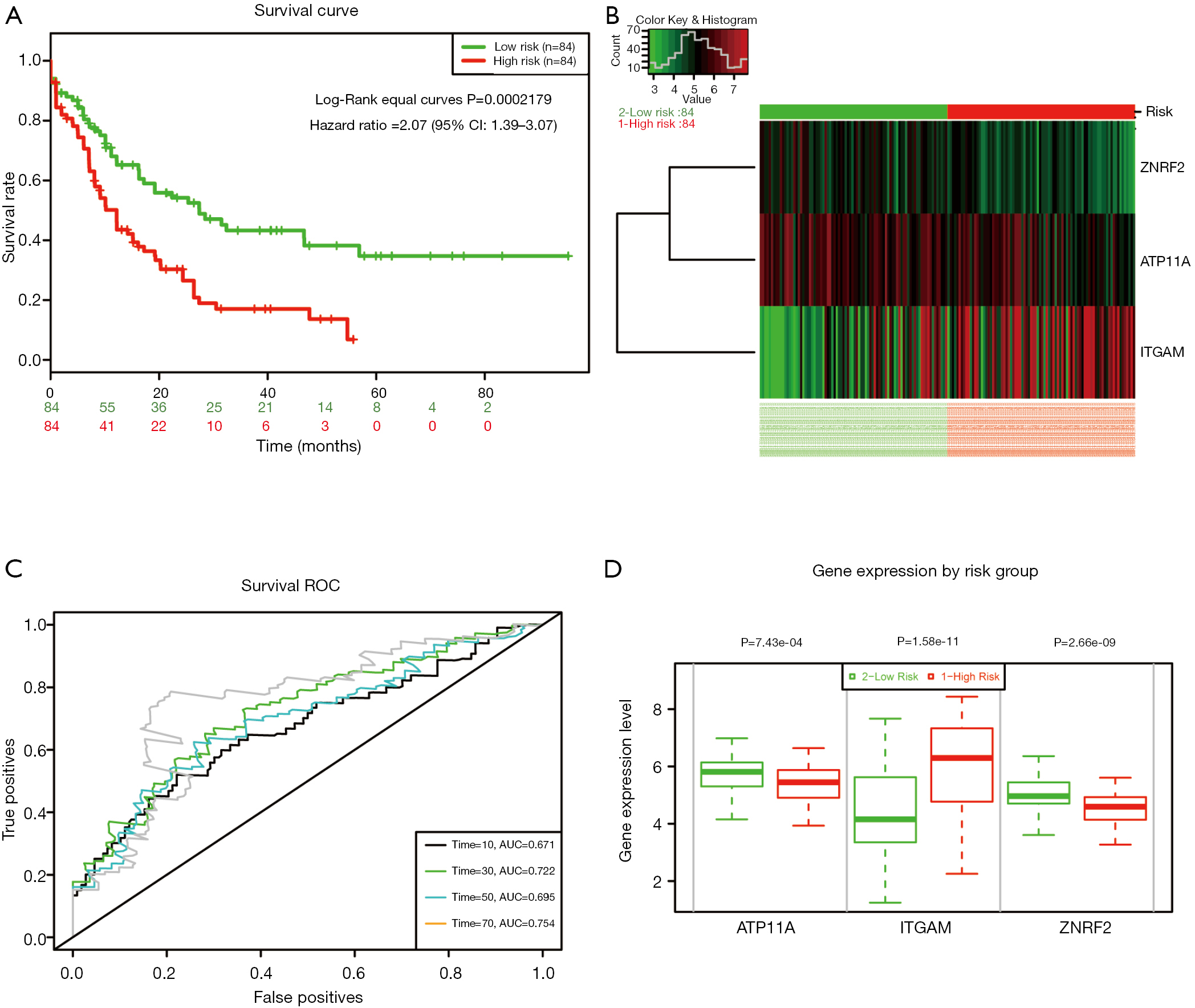 MethSurv is used to explore methylation biomarkers associated with the survival of various human cancers. MethSurv analyzed DNA methylation in TCGA. We performed methylation analysis of three genes (ATP11A, ITGAM, ZNRF2) that can be used as independent prognostic factors for AML in SurvExpress software. In the MethSurv software, we found that the P value of 73 CpG sites in the hypermethylated/down-regulated ATP11A in AML was <0.05, which we considered statistically significant. The top ten sites were shown in Table 4. Similarly, the hypermethylation/downregulation gene ITGAM has two CpG sites with a P value of <0.05, and the hypomethylation/upregulation gene ZNRF2 has three CpG sites with a P value of <0.05, which is statistically significant (Table 4). We found that the difference in DNA methylation between cg00990020 of ATP11A, cg05625471 of ITGAM, and cg07510230 of ZNRF2 was most pronounced (Figure 9A,B,C). 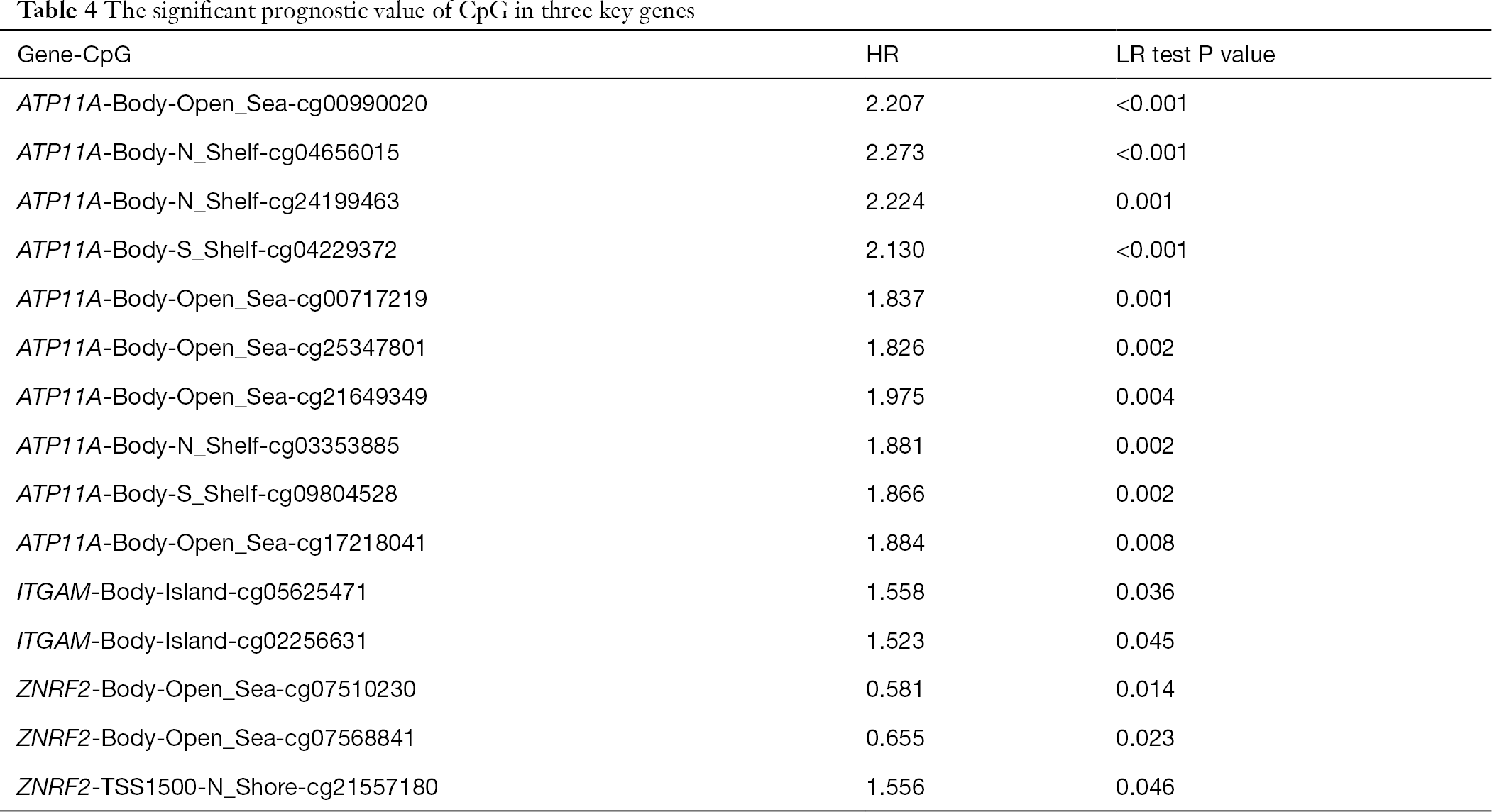 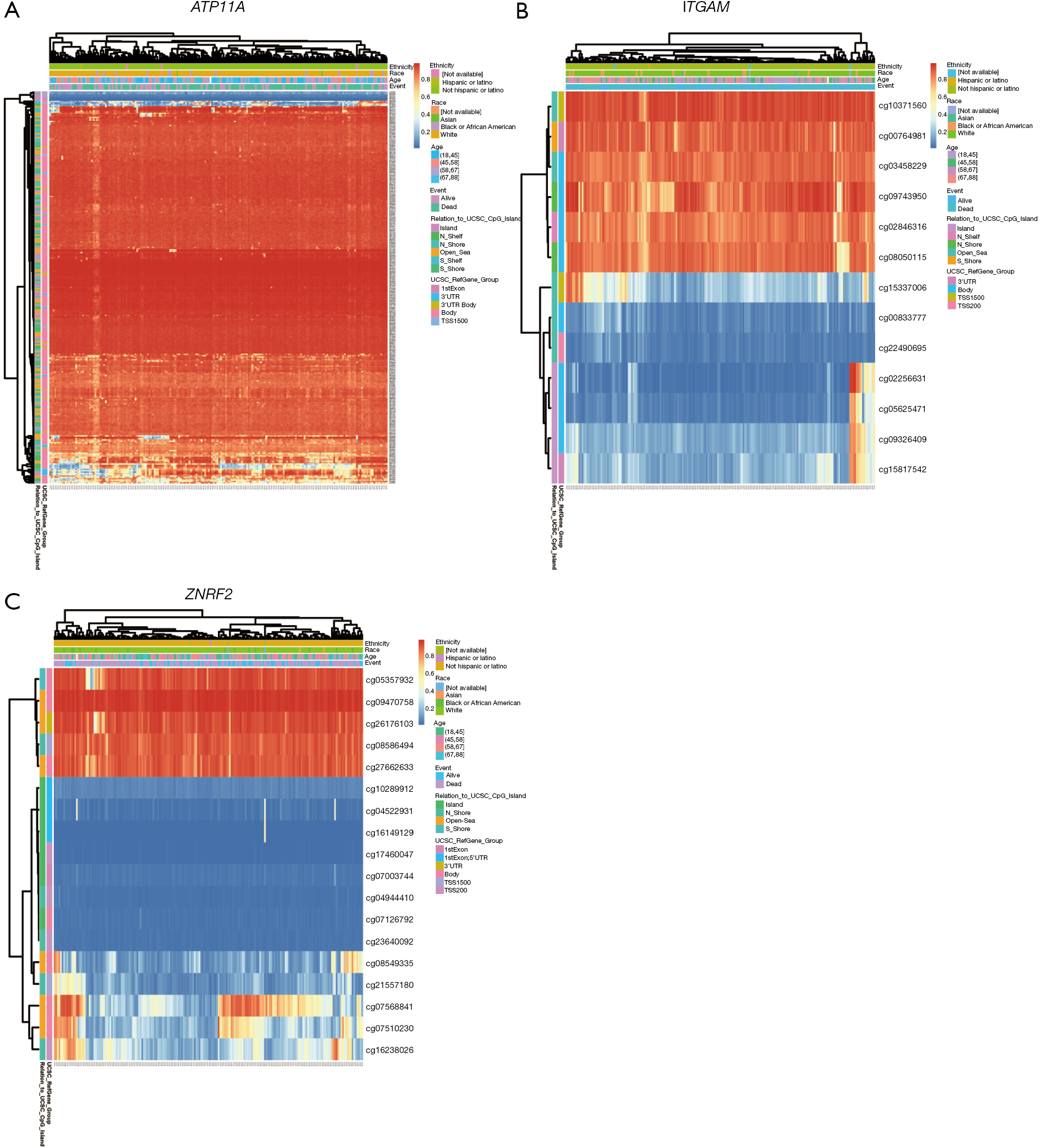 AML is the most common acute leukemia in adults and is a highly heterogeneous and fatal (1). DNA methylation is the most studied epigenetic modification and is essential in the promotion of many important BP (7). Abnormal DNA methylation can lead to a variety of pathological conditions, including carcinogenesis. (8) Certain DNA methylation engages in the initial stages of carcinogenesis, such as RASSF1A in ovarian cancer (26). In addition, DNA methylation is stable over some time and can be detected non-invasively in the blood (27). Therefore, DNA methylation has the exciting potential to become an early diagnostic biomarker for cancer. Multiple studies have shown that gene expression abnormalities are closely related to AML (10). Identification of novel biomarkers will aid in early diagnosis and improved prognosis. In this study, we performed a comprehensive analysis of DNA methylation and gene expression to identify key epigenetic genes in AML.

This study is the first to report bioinformatics studies and its association between gene methylation of AML and the corresponding mRNA expression. Through our research, we found three genes that can be used as independent prognostic factors for AML. These three genes are the low expression/methylation genes ATP11A and ITGAM, and the high expression/low methylation gene ZNRF2. ATP11A is an adenosine triphosphate binding cassette (ABC) transporter homolog gene and belongs to an extended family of ABC transporters that confer multidrug resistance to cancer cells. For example, in lymphocytic leukemia, cancer cells are resistant by increasing ATP11A expression (28). In previous studies, it was found that the expression level of ATP11A gene in colorectal cancer tumor tissues was significantly higher than that in corresponding normal tissues, and it was important for the prognosis evaluation of colorectal cancer (29). Studies have shown that the ATP11A gene is a methylation biomarker for prostate cancer and is expressed in patients with metastatic and lethal PCA (30). ITGAM is a major non-human leukocyte antigen associated with the pathogenesis of autoimmune diseases such as systemic lupus erythematosus (SLE) and IgA nephropathy (31). Recent reports that SNP rs4597342 in ITGAM 3'UTR affect miR-21 binding may be considered a risk factor for psoriasis development (32). However, the above two genes have not been reported in AML. ZNRF2 is a ubiquitin ligase of the RING superfamily. It has been shown that membrane-associated E3 ubiquitin ligase ZNRF2 is involved in mTor activation and regulation through protein interactions, and ZNRF2 depletion reduces cell size and cell proliferation (33). ZNRF2 also plays a crucial role in tumorigenesis. For example, ZNRF2 enhances the mTor and its downstream targets CyclinD1 and CDK in NSCLC cells, and the negative correlation between ZNRF2 and miR-100 in osteosarcoma specimens, low miR-100 is associated with poor prognosis in OS patients (34,35). To date, the role of the ZNRF2 gene in AML and how it regulates AML through aberrant methylation is unclear. These three genes may be good indicators for assessing the prognosis of AML. We used these three genes to set up an independent prognostic model with high accuracy, which can be used to assess the prognosis of patients with AML and as a good target for AML treatment.

This study had several limitations: (I) the small number of cases evaluated; (II) the results of the study have not been validated on clinical samples.

In summary, our research identified many aberrantly expressed genes and pathways that can be regulated by aberrant methylation in AML through a comprehensive analysis of gene expression and methylation microarrays. We identified some new markers and pathways through multi-database analysis that could be an accurate diagnosis and treatment for AML; however, determining the role of these identified genes in the AML process requires more research.

Funding: This study was supported by grants from the National Natural Science Foundation of China (81874049, 81602179, 81570198); the National Science and Technology Major Project for New Drug (No. 2017ZX301033); the Co-construction of Provincial and Department Project (WKJ-ZJ-1919); the Zhejiang Provincial Natural Science Foundation of China (LY19H160036). This study was supported by the Key Laboratory of Tumor Molecular Diagnosis and Individualized Medicine of Zhejiang Province, Zhejiang Provincial People’s Hospital (People’s Hospital of Hangzhou Medical College). Hangzhou Health Science and Technology Project (No. Y201869156).

Ethical Statement: The authors are accountable for all aspects of the work, and the questions related to the accuracy or integrity of any part of the work are appropriately investigated and resolved.