Orthodontic tooth movement (OTM) is accompanied by periodontal tissue remodeling (1), which could improve masticatory ability and restore aesthetics (2,3). However, there are many risks associated with this procedure. Root resorption is one of familiar complications during orthodontic treatment. Previous studies showed that over 90% of orthodontic teeth would suffer from some degree of tooth resorption (4). It seems that root resorption is an unpredictable and unavoidable complication of orthodontic treatment (5). This undesirable result can reduce tooth stability, even cause permanent loss of the tooth. Various cells and cytokines are involved in the complicated process of orthodontic root resorption. Odontoclast with similar biological features to osteoclast (6,7) has been considered to be responsible for the process of orthodontic root resorption (8). Antibody against receptor of macrophage colony-stimulating factor (M-CSF) blocked orthodontically induced osteoclastogenesis, odontoclastogenesis and root resorption (9-11). Osteoprotegerin (OPG)/RANK/receptor activator of nuclear factor kappa-B ligand (RANKL) signaling pathway is known to play a crucial role in the differentiation of osteoclasts. OPG prevents RANK mediated activation of osteoclastic differentiation by binding to RANKL (12). Excessive orthodontic force induced bone resorption on the surface of the alveolar bone and increased OPG-positive cells and production of RANKL/RANK in osteoclasts and odontoclasts in the periodontal tissue, indicating OPG/RANK/RANKL might be involved in the process of root resorption, (13,14).

Cystathionine gamma lyase (CSE) is a synthetase for hydrogen sulfide (H2S), a gas transmitter produced by the somatic cell. H2S contributes to a variety of pathophysiological processes in vivo (15). In recent years, many studies have shown that CSE mediates osteoclast activities (16,17). Whether CSE-H2S modulates the root resorption by regulating osteoclasts and odontoclasts remains unclear. The purpose of this study was to investigate the effect of CSE on root resorption as well as on OPG/RANKL expression under physiological condition and during orthodontic treatment in mice. The data might provide a useful reference for the treatment and prevention of orthodontic root resorption in clinical practice.

All animal procedures were in accordance with the Animal Management Regulations of the Ministry of Health of the People’s Republic of China (Document No. 55, 2001) and approved by the Animal Use and Care Committee of Tongji University. CSE knock-out (CSE-/-) mice were bred at the Shanghai Biomodel Organisms Center, Inc. 8, 26 and 52 weeks old male wild-type and CSE-/- mice were used to evaluate physiological root resorption. Each group has five animals. The orthodontic animal model was established on 8-week-old male mice. Mice were housed under specific pathogen-free conditions with controlled temperature (22±1 °C), humidity (40–60%) and a 12-h light/dark cycle, and fed with soft food and water ad libitum.

To examine the effect of CSE on the orthodontic root resorption, an OTM mouse model was established as described in a previous study (15). Briefly, a nickel-titanium coiled spring (0.2 mm in thickness, 1 mm in diameter and 10 mm in length, Smart Technology Co, Ltd., Beijing, China) was placed between maxillary incisor and first molar for 1, 2 and 3 weeks. The force produced was approximately 0.35N (18) as measured by a dynamometer (HF-2; ALIYIOI). The right side without appliance was used as control.

The molars of mice were extracted from the maxillary bone carefully. The surrounding tissues were removed with tweezers and needles. The tooth was immersed in 2 percent sodium hypochlorite for about 20 min. Root resorption craters were evaluated by micro-CT (SCANCO Medical AG, Bruttisellen, Switzerland) after the surface of the root surface was completely clear. The maxillary first molars were reconstructed by a self-contained 3D analysis software of micro-CT (SCANCO Medical AG).

The molars were further examined with a scanning electron microscopy (SEM) (TM-1000; Hitachi, Tokyo, Japan). The ratio of the root resorption area was calculated using ImageJ software (National Institutes of Health, Bethesda, Maryland, USA) (19). In addition, we assessed the root resorption by calculating the proportion of resorbed area on the pressure side of the distobuccal root of the maxillary first molar.

Maxillae from all groups were dissected and prepared for histological analysis. The specimens were fixed in 4% paraformaldehyde at 4 °C for 24 h, followed with decalcification (4 °C for 4 weeks) by incubation with 10% ethylenediaminetetraacetic Acid (pH 7.4). The specimens were dehydrated in a series of alcohol baths beginning with 50% and progressing to 100%. Thereafter, the samples were embedded in paraffin and five 4-µm horizontal sections were obtained at a depth of 100, 140, 180, 220 and 260 µm from the first molar bifurcation surface. and stained with hematoxylin and eosin (HE) and titrate-resistant acid phosphatase (TRAP) staining. We assessed the root resorption by the proportion of resorbed area on the pressure side of the distobuccal root of the maxillary first molar.

Data were expressed as mean ± standard deviation. The statistical significance of differences among groups was calculated by independent 2-tailed Student’s t-tests or one-way analysis of variance (ANOVA). P<0.05 was considered significant. 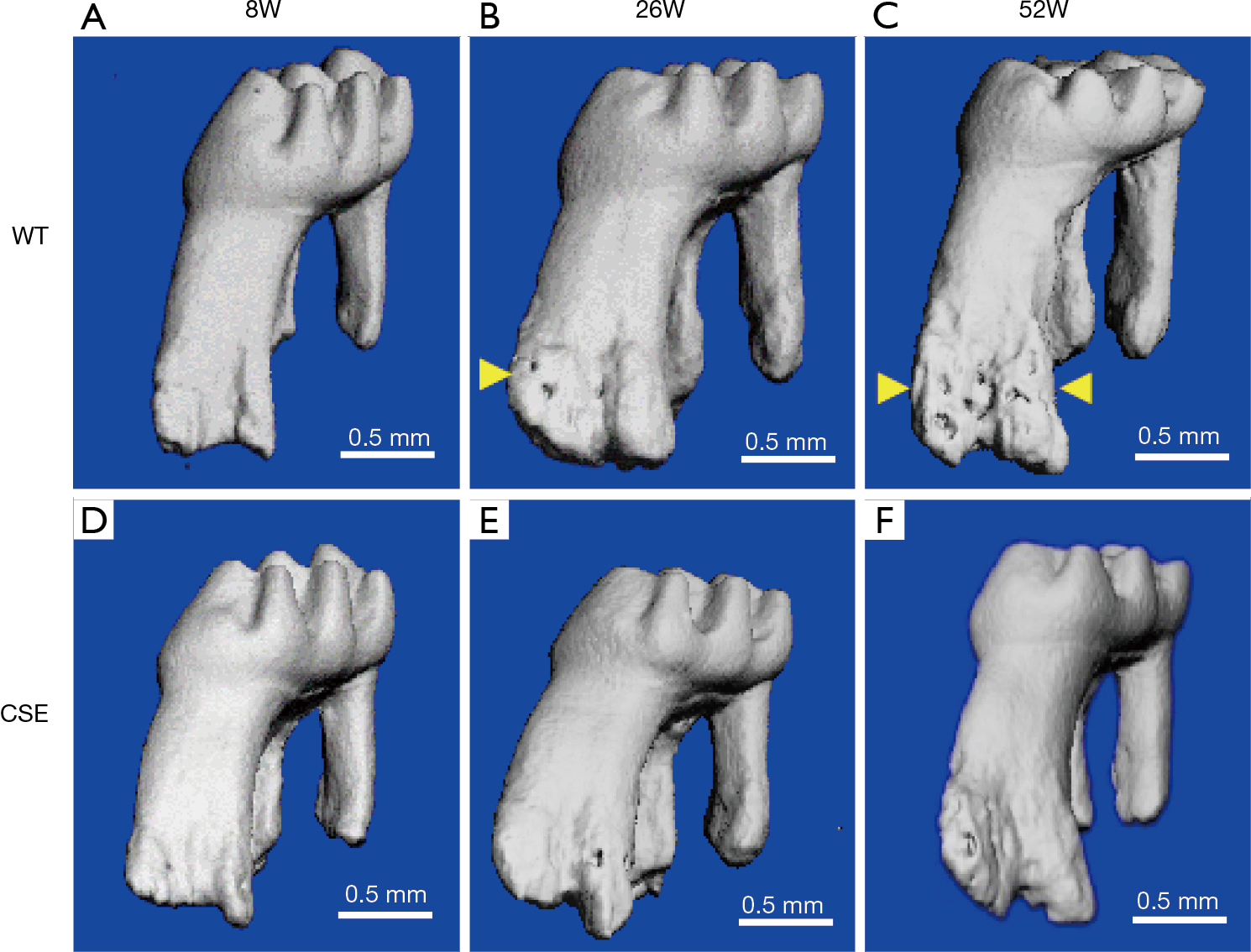 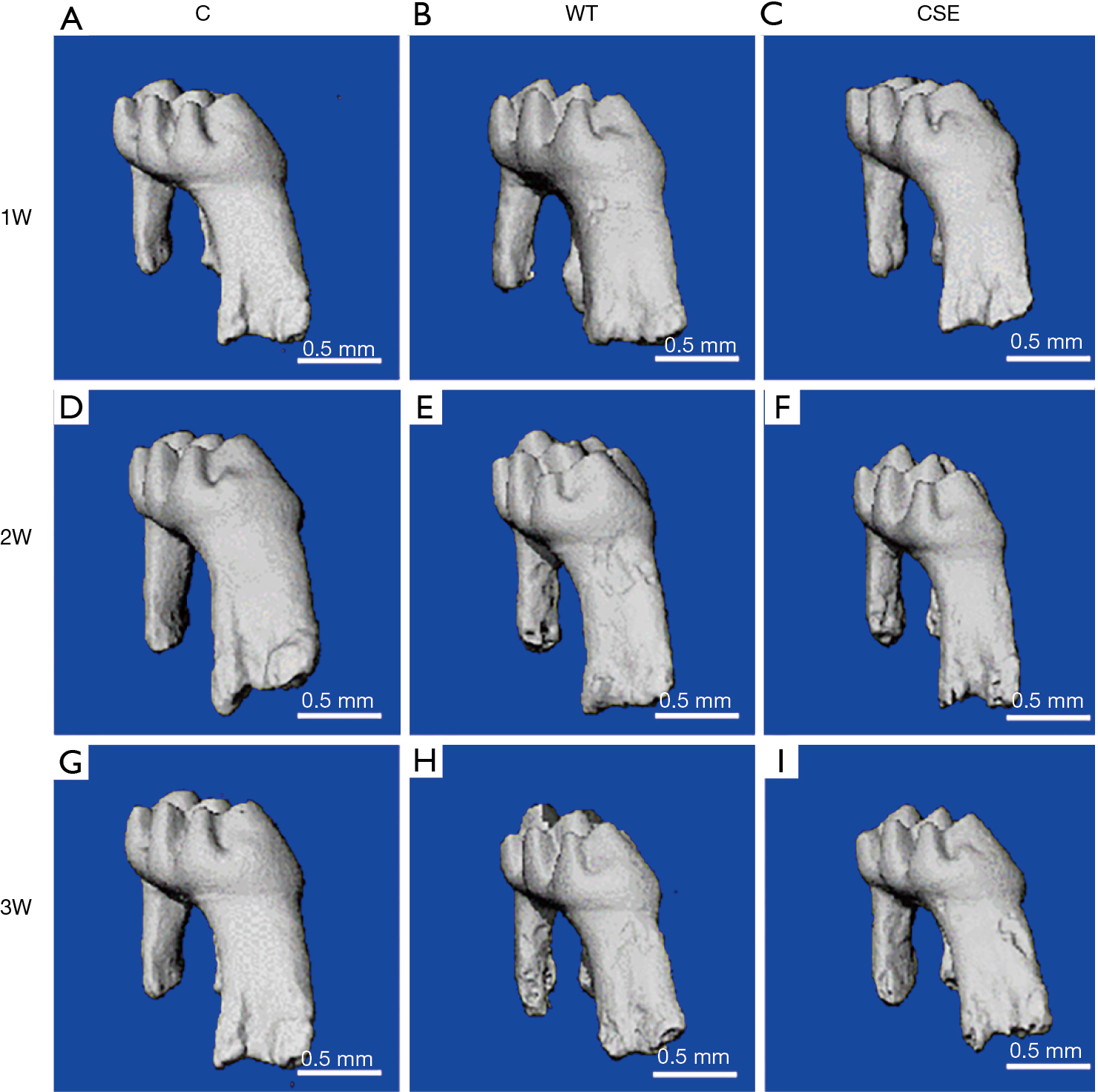 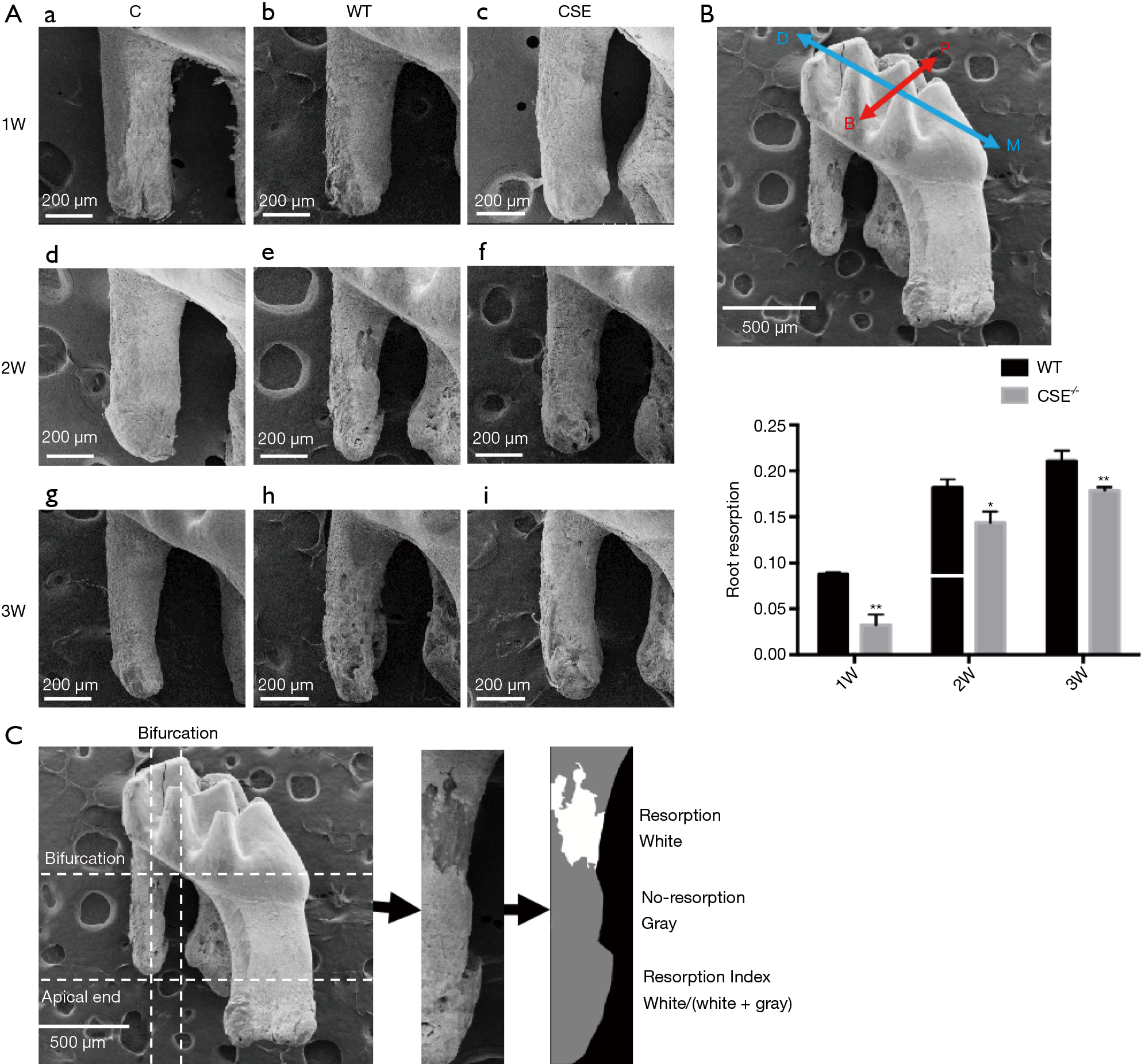 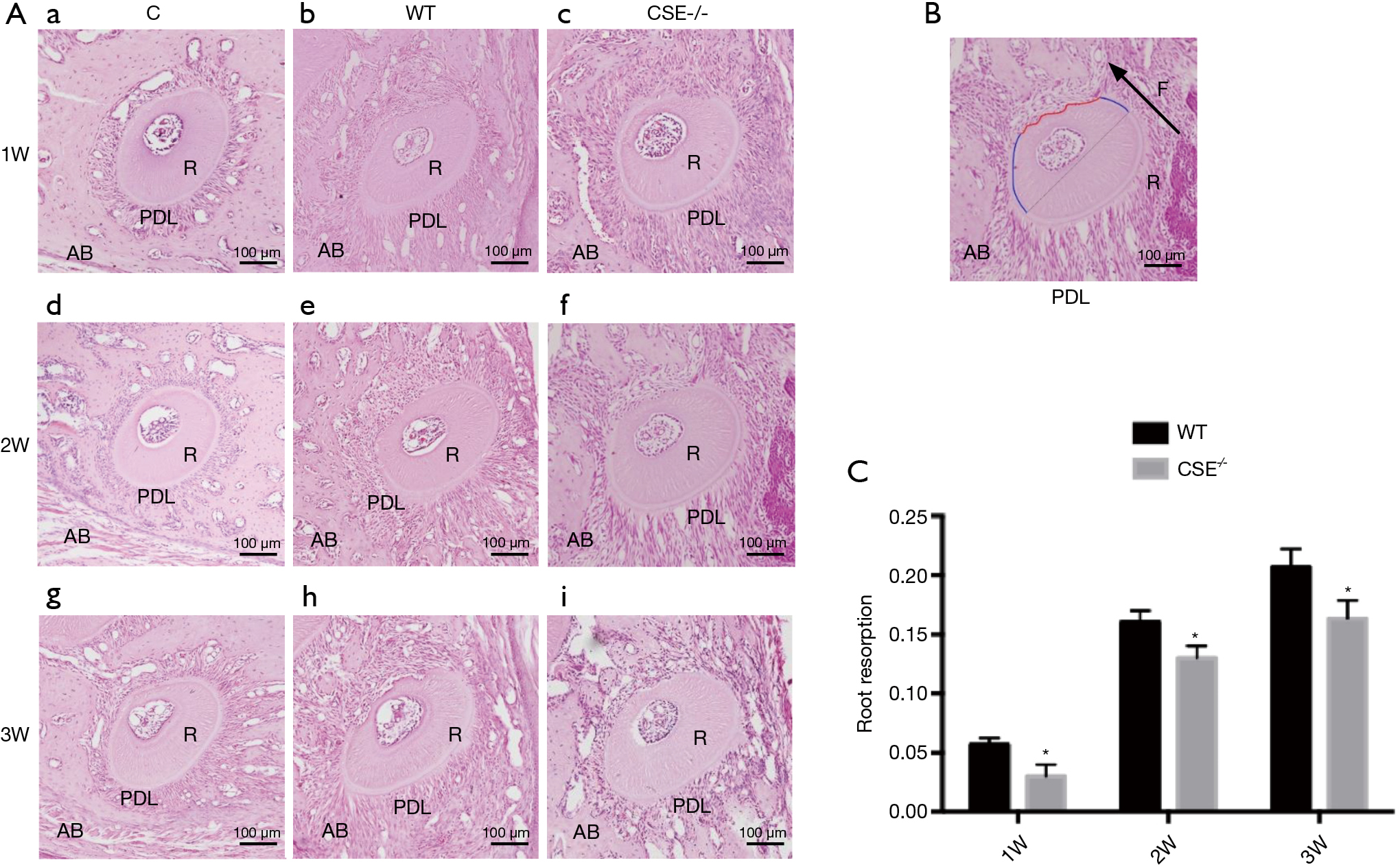 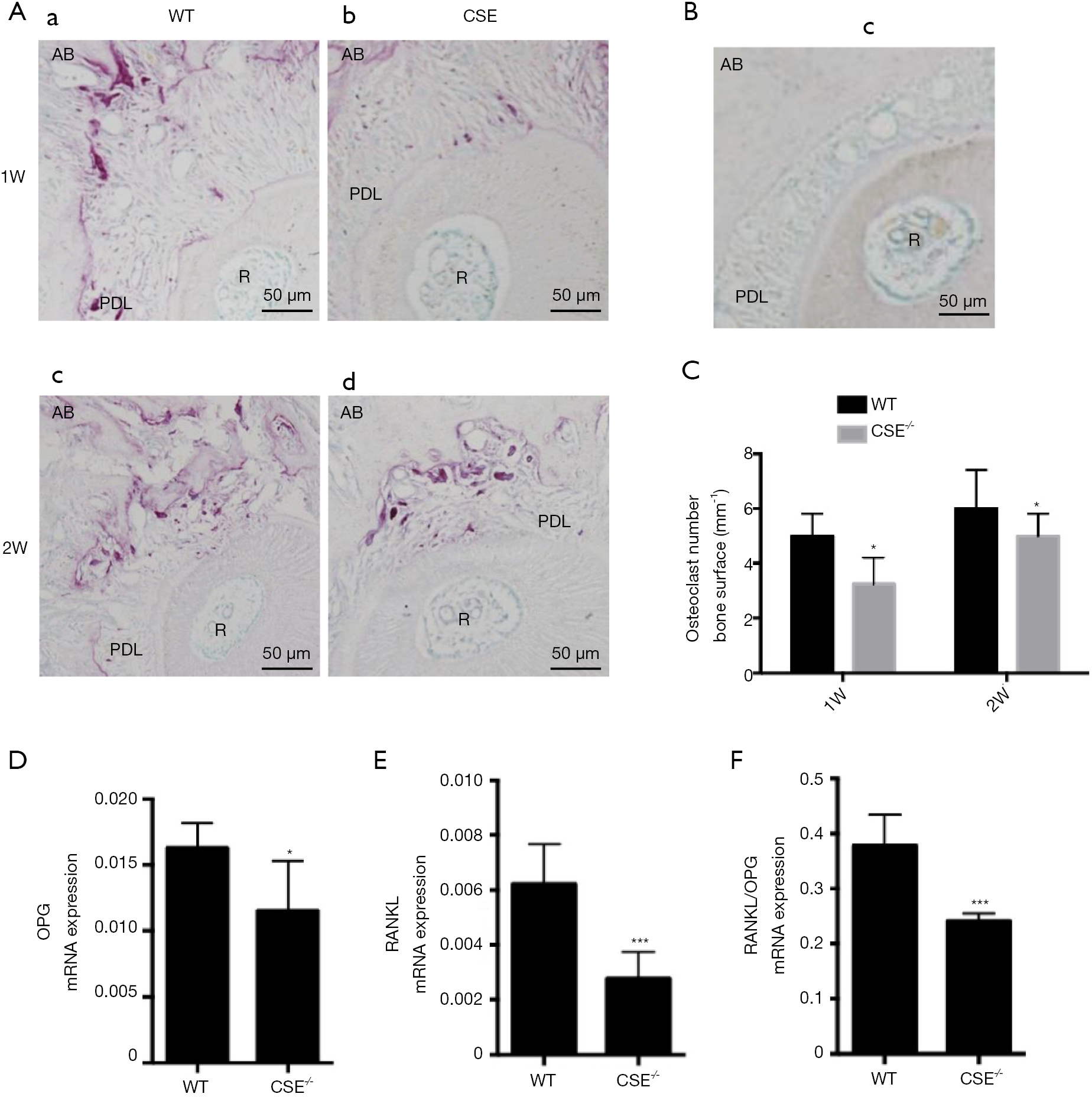 In this study, TRAP staining was performed to evaluate the role of CSE in root resorption and osteoclast response following 2-week orthodontic treatment. It was found CSE deficiency reduced orthodontic root resorption (Figure 5A) and osteoclasts. The changes were statistically significant (Figure 5C). The mRNA expression of RANKL/OPG in alveolar bone around the maxillary first molar was measured by RT-PCR (Figure 5D,E,F). The expression in CSE-/- group was lower compared with WT mice.

Root resorption is a physiological or pathological phenomenon of cementum and dentin defects (20). The incidence of orthodontic root resorption is extremely high. Root resorption can lead to an imbalance in the ratio of crown and root, reduction in root length, poor tooth stability in long term, even loss of tooth (21). On the pressure side of OTM, osteoclasts activated by many molecules in periodontal tissue cause the resorption of bone. Odontoclasts in cementum, as part of periodontal tissue, is also affected. Odontoclasts are very similar to osteoclasts. Under pressure, odontoclasts are activated to cause cementum resorption, which is similar to the process of alveolar bone resorption caused by osteoclasts. This phenomenon is considered as the orthodontic root resorption (22).

In this study, we found that the root resorption of maxillary first molars in both CSE-/- and WT mice was aggravated with age, suggesting that age might be a risk factor of root resorption. The possible causes include a decreased periodontal vascularity and inelasticity, thicker cementum and its firm attachment in the apical third of the root with increased susceptibility (23), Our data showed that CSE-/- mice has less age-related resorption compared with WT mice. CSE is a key enzyme that controls production of H2S in the periodontal tissue. Our study indicates that CSE H2S might play a substantial role in physiological root resorption.

There are many factors that affect root resorption, such as sex, age, genetics, systemic factors, tooth type, root shape, and previous medical history. In addition, orthodontic treatment duration, applied force size, movement type and extraction treatment are associated with orthodontically induced root resorption (24). In the clinical orthodontic practice, orthodontists attempt to find an “optimal” force to remove the dislocated tooth. However, root resorption seems to be inevitable even with light force (25). A previous study has found that 35g of orthodontic force can effectively move orthodontic teeth while minimizing tissue damage (26). However, we found that using 35g of force to move a mouse's maxillary first molar for a week resulted in root resorption.

In conclusion, the results of our study demonstrated that CSE deficiency reduced formation of osteoclasts and odontoblasts, which consequently downregulated physiological and orthodontic root resorption by disruption of the mechanisms of RANKL/OPG-induced osteoclastogenesis and odontoclastogenesis, suggesting careful planning and execution of orthodontic mechanics, such as considering age at the start of treatment and duration of treatment.

Ethical Statement: The authors are accountable for all aspects of the work in ensuring that questions related to the accuracy or integrity of any part of the work are appropriately investigated and resolved. This study was approved by the Animal Use and Care Committee of Tongji University (2018-003).