Venous thromboembolism (VTE) is a common complication of patients with tumors, and is one of the important causes of death of patients with tumors. VTE mainly includes deep venous thrombosis (DVT) and pulmonary thromboembolism (PTE), etc. The overall risk of VTE in cancer patients is 7–8 times higher than that in the general population (1). Patients hospitalized and receiving active anti-tumor therapy are the high-risk groups for VTE. Lung cancer is one of the most common malignant tumors in patients with VTE, and the occurrence of VTE is one of the important causes of death in patients with lung cancer. In our previous study, the incidence of VTE after benign lung tumors was 7.5%, and the incidence of malignant tumors was 16.4% (2), which further confirmed this view. Studies have found that some non-small cell lung cancer (NSCLC) cells have high expression of epidermal growth factor receptor (EGFR), and some NSCLC cells are sensitive to EGFR-TKI drugs, which all suggest that some NSCLC is the result of abnormal expression of EGFR (3-5). The EGFR, a member of the ErbB receptor tyrosine kinase family, is activated by EGF or heparin binding EGF (HB-EGF) in an autocrine or paracrine manner. After ligand binding, EGFR forms homo- or heterodimers with all four family members and activates various signaling pathways that affect vascular cell differentiation and matrix homeostasis. EGFR can also be bound to specific receptors by vasoactive agents such as angiotensin, α1, β-adrenergic receptor agonists, thrombin, etc., leading to reverse transcription that acts on vascular endothelial cells (2). NSCLC accounts for 75–85% of the total cases of lung cancer, among which adenocarcinoma is the main type. In 2011, International Association for the Study of Lung Cancer (IASLC), American Thoracic Society (ATS) and European Respiratory Society (ERS) jointly initiated an international multidisciplinary approach to the classification of lung adenocarcinoma (6). The new classification method of lung adenocarcinoma provides a uniform terminology and diagnostic criteria, and cancels the classification of bronchiolar alveolar carcinoma. Four new names have been added: adenocarcinoma in situ, microinfiltrating adenocarcinoma, infiltrating adenocarcinoma, and infiltrating mucinous adenocarcinoma. Among them, infiltrating adenocarcinoma includes adherent, acinar, papillary, micropapillary, solid, mucinous, fetal, colloidal, and intestinal adenocarcinoma. Currently, there are few relatively studies on the incidence of VTE in patients with invasive lung adenocarcinoma with specific molecular subtypes. The purpose of this study is to observe the clinicopathological data of VTE patients after lung cancer surgery, in order to investigate the incidence of VTE in patients with EGFR mutated lung adenocarcinoma and the related risk factors affecting the occurrence of VTE in patients with lung cancer, so as to provide clinical basis for the perioperative prevention and treatment of VTE in patients with lung cancer.

Ethics approval and consent to participate:

The study was approved by the Ethics Committee of Beijing Chaoyang Hospital (No.2019-D.-221-1). The participants provided written informed consent to participate in this study.

This study was a single-center study, with cases of lung cancer undergoing surgical treatment in the department of thoracic surgery of our hospital from July 2016 to March 2018 as the study object. The authors are accountable for all aspects of the work in ensuring that questions related to the accuracy or integrity of any part of the work are appropriately investigated and resolved.

Inclusion criteria: (I) patients with primary infiltrating lung adenocarcinoma; (II) surgical treatment has been carried out; (III) ultrasound examination of lower limb veins before and after surgery; (IV) complete pathological results of genetic testing were obtained after the operation.

Exclusion criteria: (I) metastatic lung cancer; (II) deep vein thrombosis (DVT) was identified by preoperative low limb ultrasound; (III) no lower extremity Doppler ultrasonography was performed; (IV) other diseases of the blood system; (V) anticoagulation therapy was applied for other diseases before and after operation. Below is our grouping flowchart (Figure 1). 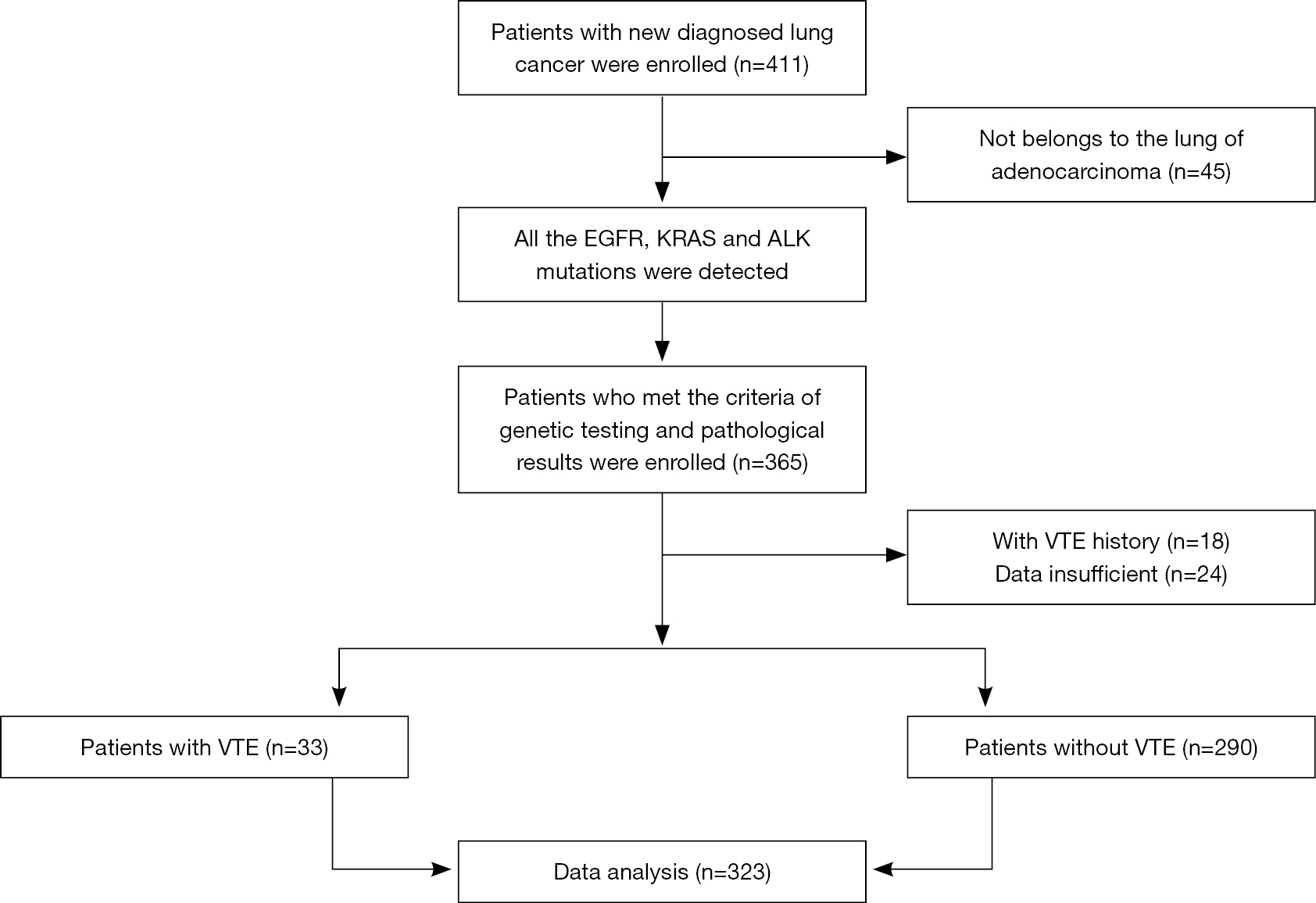 Caprini risk stratification was carried out in all patients, with scores ≤4 points for VTE low-risk, 5–8 points for medium-risk and ≥9 points for high-risk. All the enrolled patients received doppler ultrasound of lower limbs before and after the operation to determine whether there was DVT or not. If there are any of the following problems, CT pulmonary angiogram (CTPA) should be performed to determine whether there is a new pulmonary embolism (PE): (I) PTE symptoms (chest pain, hemoptysis or unexplained hypoxemia and dyspnea); (II) Caprini score ≥9 points; (III) new DVT occurred after surgery.

The diagnosis of lung cancer is based on the pathological results of tumor. All patients with lung adenocarcinoma are classified into subtypes of lung adenocarcinoma according to the classification method proposed by IASLC/ATS/ERS in 2011. DVT was diagnosed by color doppler ultrasound. PTE was diagnosed by CT pulmonary angiography. Postoperative VTE positive was defined as no VTE before surgery, and DVT (including intramural venous thrombosis) was diagnosed after surgery by ultrasound of lower extremity or PE by CTPA.

The measurement data of normal distribution were expressed as Mean ± standard deviation (mean ± SD), and the t-test was used for comparison between groups. Measurement data that do not obey normal distribution are represented by M (QR), and non-parametric test is adopted for comparison between groups. The counters were measured by ratio and rate, and compared by χ2 test. Variables with statistical significance from univariate analysis results were included in multivariate Logistic regression analysis. All data were statistically analyzed using SPSS22.0 software package, and P<0.05 was considered statistically significant. 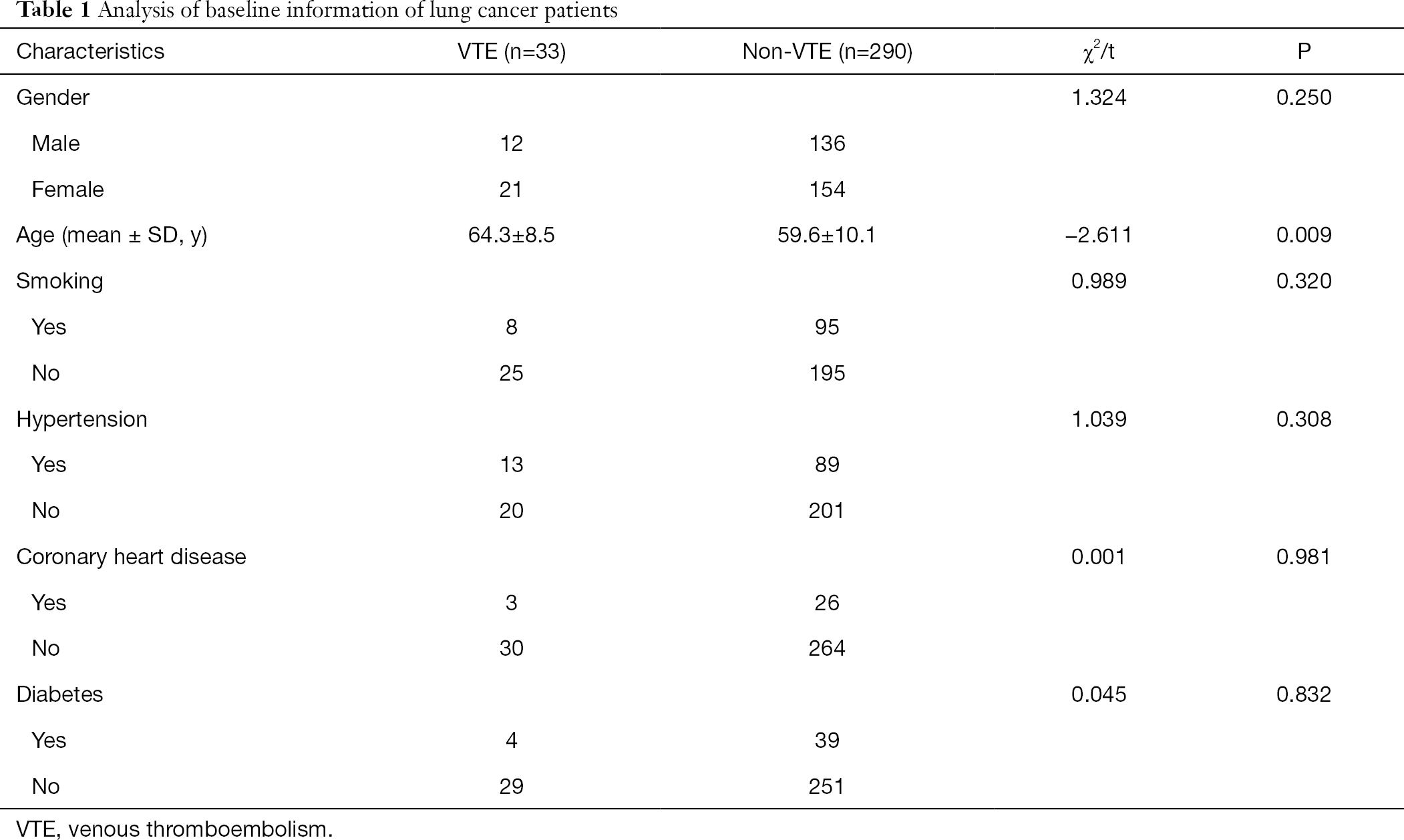 Sixty-two patients (19.2%) underwent thoracotomy and 261 patients (80.8%) underwent VATS. The incidence of postoperative VTE in patients undergoing thoracotomy was higher than that in patients undergoing VATS surgery, with statistically significant difference (P=0.030). The operation duration and blood loss in the VTE group were greater than those in the control group, and there were statistically significant differences (P=0.002, P=0.002). The length of postoperative hospitalization in the VTE group was longer than that in the control group, but there was no statistical difference (P=0.174) (Table 3). 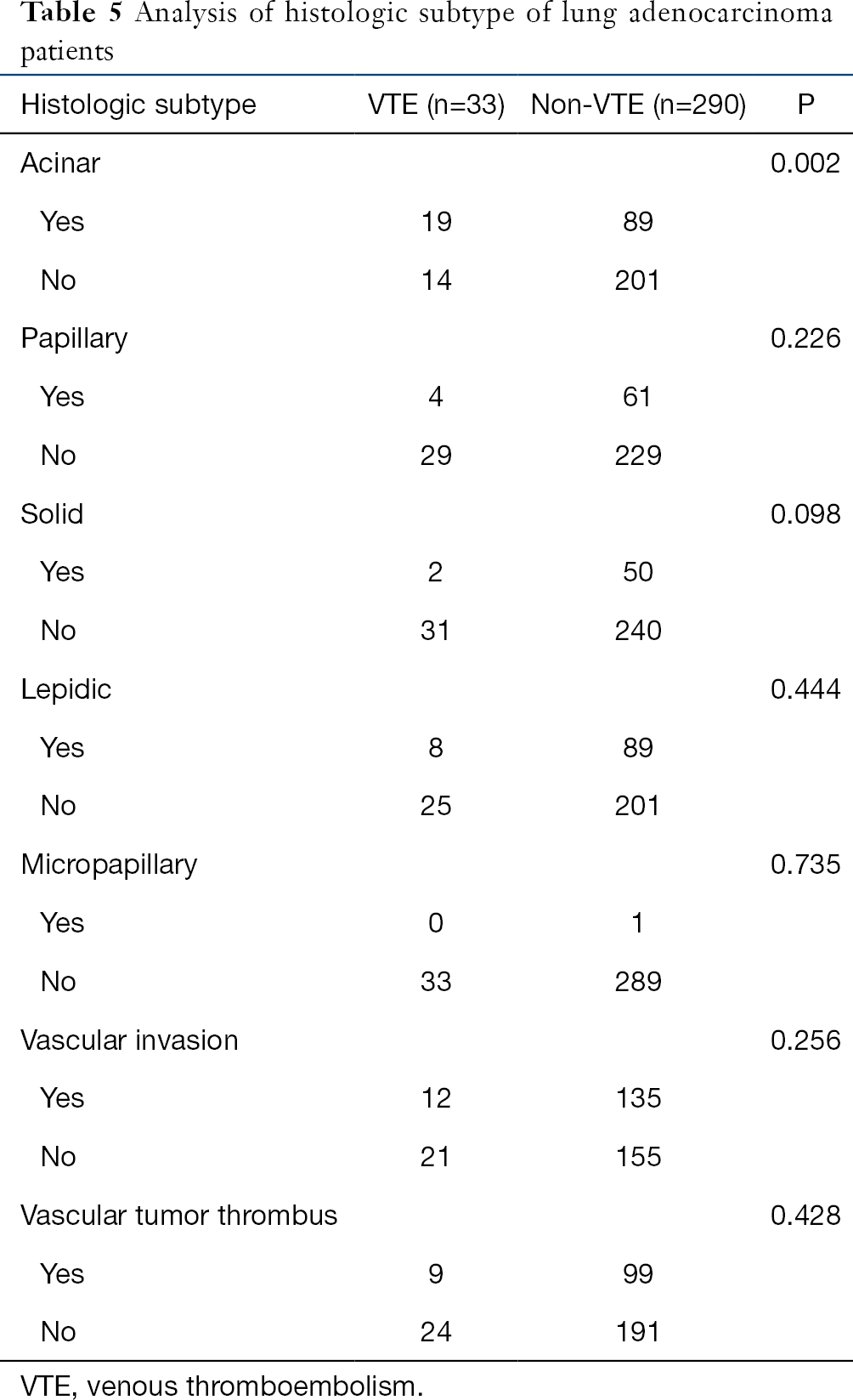 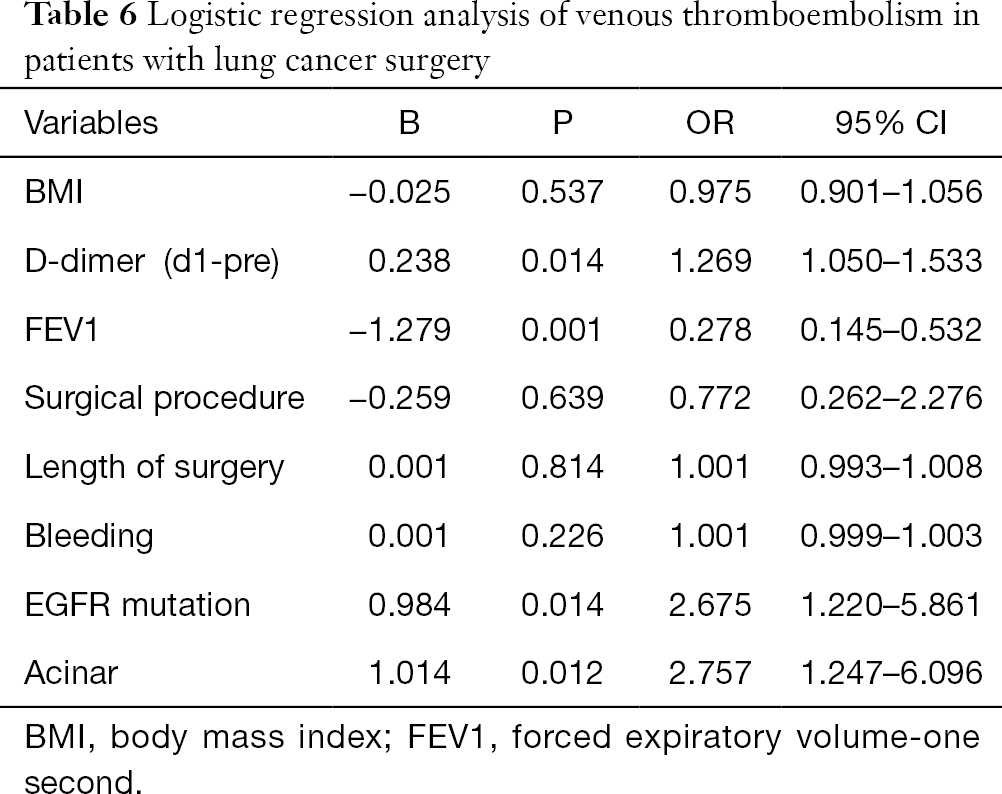 Literature review found that older age was considered as a risk factor for lung cancer with VTE (11). Similarly, higher BMI meant higher risk rate of VTE (12), which was consistent with our conclusions. In the analysis of gene test results, the evaluation of whether tumor gene mutation affects the risk of thrombosis has been the focus of preclinical research and clinical research. Our study showed that patients with EGFR mutations had a higher risk of VTE than those with wild-type EGFR (17% vs. 6%, P=0.002). Review of literature data shows that EGFR amplification or mutation can induce excessive expression of TF in cancer cells (13,14). Increased TF may constitute a direct association between thrombosis risk and oncogene expression. We hypothesized that EGFR mutations might increase TF expression, thereby increasing tumor coagulant activity and VTE incidence. However, previous studies have reported inconsistent correlations between EGFR gene status and VTE risk in lung adenocarcinoma patients (15,16). One possible explanation for the different results is that previous studies included patients from different ethnic groups. Limited clinical data indicate that there is no clinical link between the mutation status of KRAS tumor and the systemic hypercoagulability of cancer patients (15). In our study, KRAS mutation was not independently correlated with the risk of VTE in patients with invasive lung adenocarcinoma, which was consistent with some research results. Relevant literature suggested that ALK gene mutation increased the risk of VTE in patients with NSCLC (1), which was not reflected in our study. We consider that it may be related to the selection of sample enrollment and the difference of sample size. The D-dimer level represents the preoperative coagulation state of the patient, which has high sensitivity and poor specificity, and is mostly used for auxiliary diagnosis and prognosis monitoring of VTE (17). Therefore, we compared the changes of D-dimer in patients before and on the first day after the operation, and we believed that the difference between the VTE group and the control group was more significant, and the difference was statistically significant (P=0.001). Our results suggest that FEV1 level is an independent risk factor for lung cancer associated with VTE. We speculate that this may be related to vascular endothelial injury caused by hypoxia. Lung cancer surgery involves the blocking of important blood vessels, which will inevitably cause local venous injury, while vascular endothelial injury will expose collagen and basement membrane, release TF, promote platelet agglutination, and lead to thrombosis. In the analysis of surgical related factors, there were statistically significant differences in surgical methods (thoracotomy vs. VATS), surgical duration and blood loss between the VTE group and the control group (P<0.05). In the analysis of tumor pathological data, the proportion of acinar dominant lung adenocarcinoma in the VTE group was higher than that in the non-VTE group (57.6% vs. 30.7%, P=0.002). The other types of lung adenocarcinoma showed no statistical difference between the VTE group and the control group. The results of this study may be due to the relatively small sample size, and the included subjects were all patients with invasive lung adenocarcinoma, excluding patients with micro-invasive lung adenocarcinoma and adenocarcinoma in situ. The conclusion may be biased, which needs to be confirmed in further studies. A number of studies have shown that low degree of tumor differentiation and advanced tumor are high risk factors for VTE (18-21), while studies on new classification of lung adenocarcinoma and its correlation with VTE are still lacking. The subjects of this study were patients with invasive lung adenocarcinoma who retained complete pathological and genetic test data after surgery, to determine the incidence of VTE in patients with EGFR mutated lung adenocarcinoma. Compared with other studies on lung cancer complicated with VTE, the conclusion has certain limitations, and more clinical data are needed to support it. As far as we know, our observation of the high VTE rate of acinar primary lung adenocarcinoma in the new classification of lung adenocarcinoma is the first report. Further research needs to be done in a larger prospective cohort.

To sum up, the incidence of VTE was 10.2% in patients with invasive lung adenocarcinoma without prophylactic anticoagulant therapy. EGFR gene mutation is an independent risk factor for postoperative VTE in lung cancer, and the incidence of VTE in adenocarcinoma with alveolar predominance is the highest. Other independent risk factors included the difference of D-dimer (d1-pre) and preoperative FEV1.