Vitamin D (VD) refers to a group of fat-soluble secosteroids that increase intestinal absorption of calcium, magnesium, and phosphate and exhibit numerous other biological effects (1). The most important compounds in VD in humans are VD3 (also known as cholecalciferol) and VD2 (ergocalciferol), which can be obtained via diet or supplements (2,3).

Acute graft-versus-host disease (aGVHD) is a medical complication which may result in significant morbidity and mortality after allogeneic hematopoietic stem cell transplantation (4) and organ transplantation (5). Currently, limited success had been made for the strategies to treat or even control aGVHD (6). To simulate the lymphopenic but delayed pathogenic state of graft-versus-host reaction during aGVHD, spleen cells derived from parental origin were injected into F1 mice which may generate donor CD8+ cytotoxic T lymphocytes specific for host spleen cells in 2 weeks (7).

The traditional view of 1,25-dihydroxyvitamin D3 (1α,25(OH)2D3) is a crucial role in maintaining calcium homeostasis and modulating calcium metabolism. The role of 1α,25(OH)2D3 in immune responses to infection has become an exciting topic of research (8,9). 1α,25(OH)2D3 has been shown to regulate cellular proliferation, differentiation, apoptosis, and innate and adaptive immunity (10) in several diseases, such as inflammatory bowel disease (11), diabetes (12), food allergies (13), and tumors (14). However, whether 1α,25(OH)2D3 exerts a therapeutic effect against aGVHD had not been determined. Therefore, we examined the regulative ability of 1α,25(OH)2D3 in protecting aGVHD. Surprisingly, our results consistently demonstrated that administration of 1α,25(OH)2D3 significantly slowed aGVHD progression and improved survival of B6D2F1 recipients of grafted B6 splenocytes. In vitro studies proved that 1α,25(OH)2D3 induces the differentiation of regulatory T cells (Tregs), which regulate, at least in part, immune hemostasis in aGVHD. The results of the study emphatically proved that 1α,25(OH)2D3 treatment could be useful to prevent aGVHD or other autoimmune disease (15).

C57BL/6 (H-2Kb) and B6D2F1 (H-2Kb/d) mice (male, 8 weeks old) were obtained from the Animal Resources Center, Nanjing Medical University. The mice were housed with standard rodent diet and water provision. Relevant legal and ethical requirements were followed carefully according to the protocol (number NMU08-092), which was approved by the Institutional Animal Care and Use Committee of Nanjing Medical University.

B6 derived CD4+CD25– T cells were labeled with carboxyfluorescein succinimidyl ester (CFSE) (Invitrogen, Carlsbad, CA, USA), and cultured with CD4+ induced Tregs (iTregs) as well as irradiated dendritic cells and anti-CD3 for 3 days at different ratios. The suppressive ability of iTregs was tested through flow cytometry.

Results are shown as the mean ± standard error of the mean (SEM). All analysis were performed using Stata software (version 11.0). P values less than 0.05 (two-tailed) was considered statistically significant.

1α,25(OH)2D3 protects against aGVHD in a mouse model

To investigate the protective effect of 1α,25(OH)2D3 during the pathogenesis of aGVHD, 50×106 B6 spleen cells were injected intravenously into B6D2F1 mice (Figure 1A). Survival was monitored daily. 1α,25(OH)2D3 administration significantly prolonged survival ratio compared with the model group (Figure 1B). Additionally, improvement of the kidney injury was also observed in aGVHD mouse model with 1α,25(OH)2D3 treatment (Figure S1). 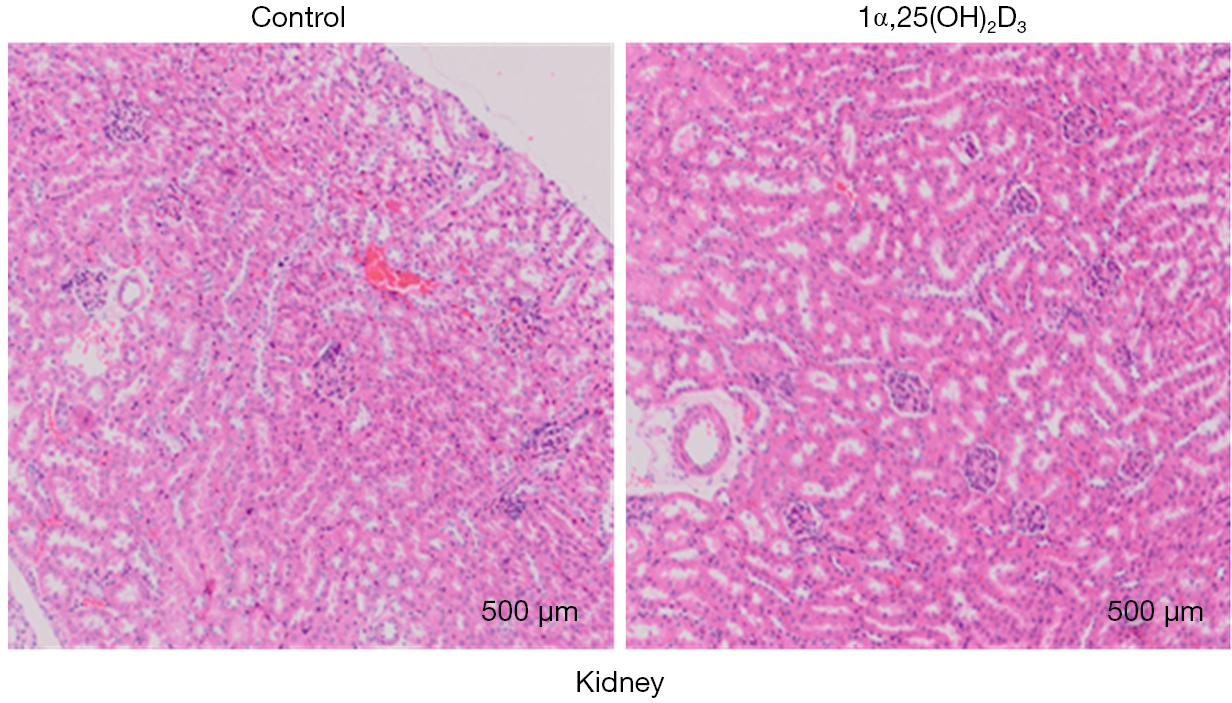 To assess the effect of 1α,25(OH)2D3 administration on the development of aGVHD, mice were sacrificed on day 14 after the establishment of aGVHD, and donor and host cells in the spleen were identified by flow cytometry following H-2Kd and H-2Kb staining (donor cells: H-2Kb+/d−, host cells: H-2Kb+/d+). Donor cells comprised almost 50% of the cells in the Control group (17). Interestingly, 1α,25(OH)2D3 injection suppressed donor cell engraftment (50% to 10%). The primary pathologic characteristic of aGVHD is a reduction of lymphocytes from the host origin (18). What’s more, although B6 spleen cells transfer led to the lower number of the total number of spleen cells and host cells in F1 mice, 1α,25(OH)2D3 presented strong ability to preserve the proportion of host cells and decrease the expansion of donor cells (Figure 2A). 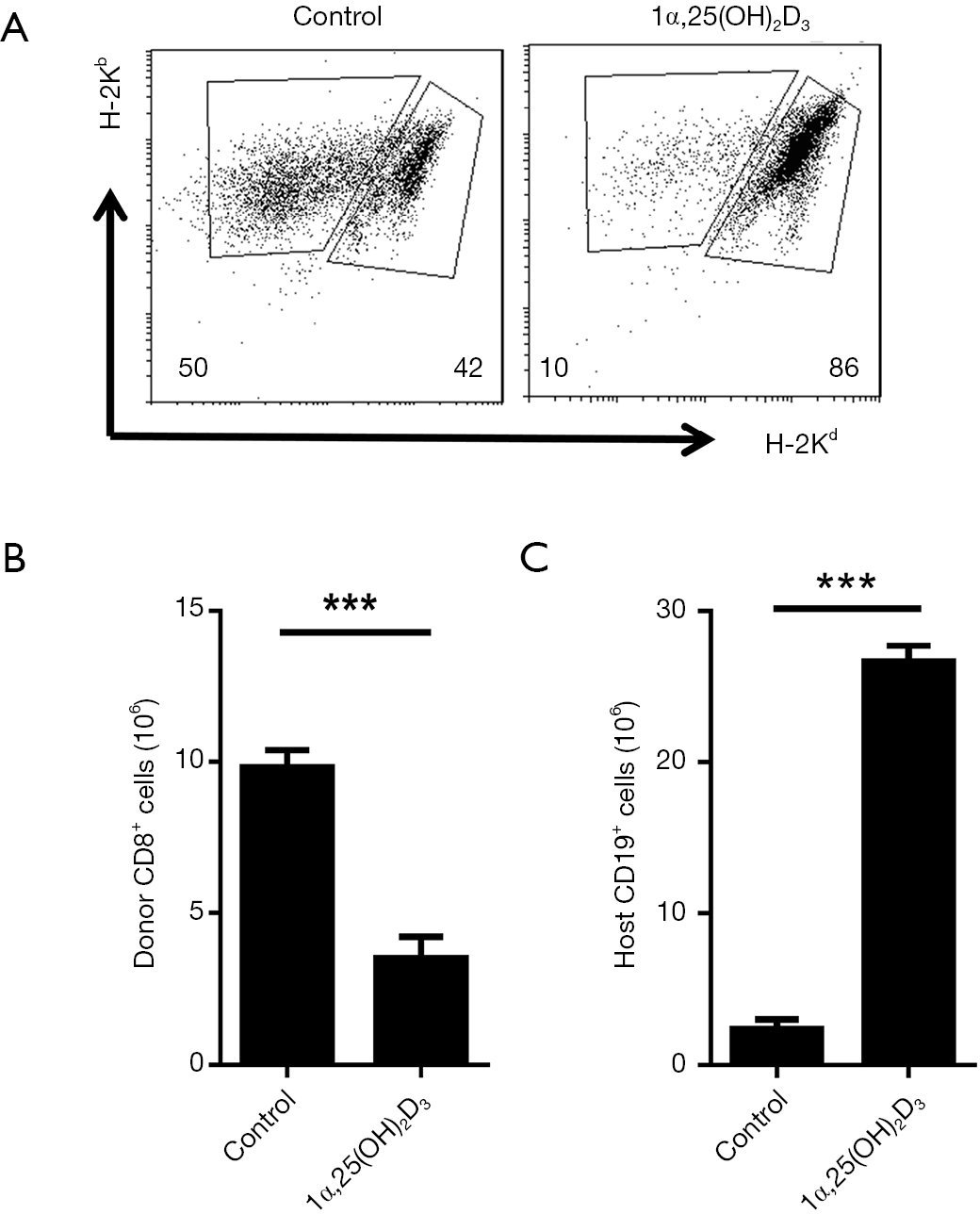 Next, we examined Foxp3 expression in 1α,25(OH)2D3-treated and -untreated mice. Administration of 1α,25(OH)2D3 led to increasing number of spleen lymphocytes in 1α,25(OH)2D3 group mice, which is almost twice the control (data not shown). Therefore, the absolute number of Foxp3-expressing CD4+ cells increased, whereas no difference was observed in the percentage of Foxp3+ T cells in the spleen (Figure 3A). 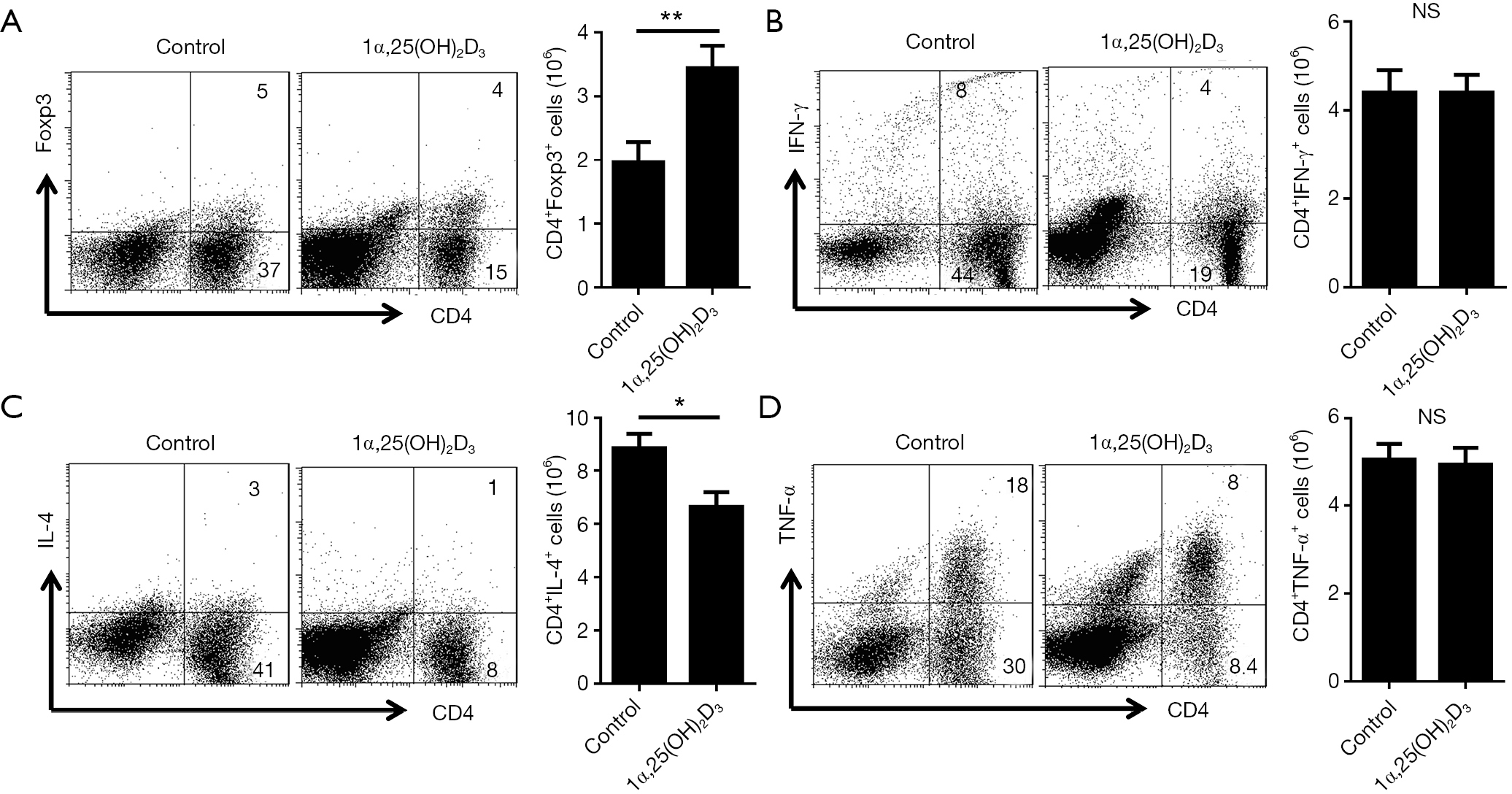 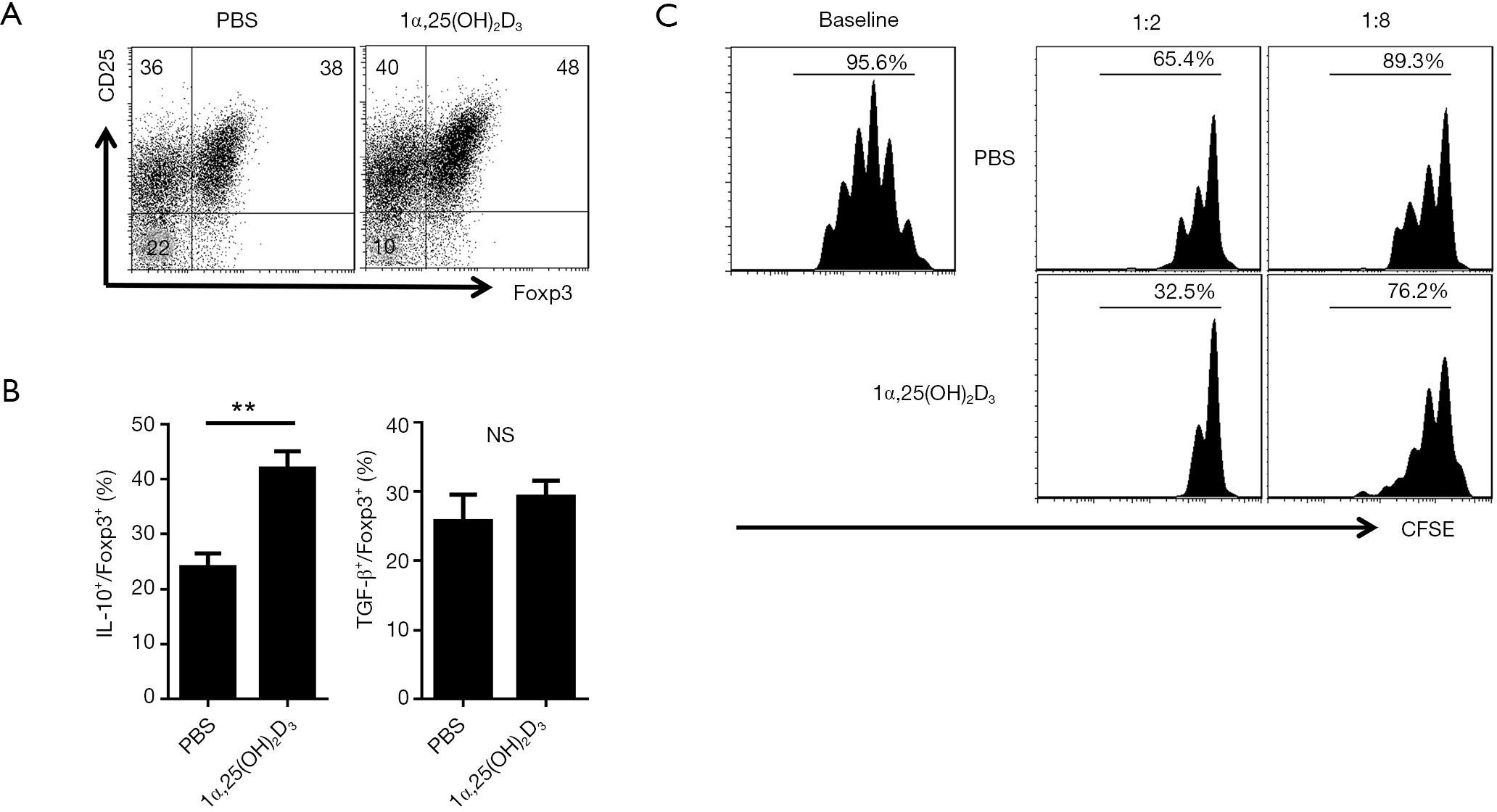 Next, we examined the expression of various cytokines in 1α,25(OH)2D3-treated and -untreated iTreg subsets, as Tregs are known to express anti-inflammatory cytokines such as IL-10 and TGF-β to suppress effector T cell expansion. As expected, 1α,25(OH)2D3 treatment resulted in increased IL-10 expression; however, no significant change was observed in TGF-β expression (Figure 4B). We then directly compared the suppressive effects of both iTreg subsets in vitro. Compared with PBS-treated iTregs, T cell proliferation was suppressed in co-culture with 1α,25(OH)2D3-treated iTregs.

Finally, a monoclonal antibody against CD25 (CD25MoAb or PC61) was used to abolish the function of Tregs in vivo (22,23). Meanwhile, mice in 1α,25(OH)2D3 + PC61 group and 1α,25(OH)2D3 + IgG were injected intraperitoneally with PC61 (250 mg/mouse/day) and IgG (250 mg/mouse/day), respectively for 7 days before they were injected with 50×106 B6 cells. After 14 days, the effect of 1α,25(OH)2D3 on aGVHD was generally examined by flow cytometry, which showed that the protective ability of 1α,25(OH)2D3 was substantially reversed (Figure 5A), consistent with the results of survival analyses shown in Figure 5B.

In this study, we demonstrated that the administration of 1α,25(OH)2D3 reduced the severity of aGVHD in a mouse model. 1α,25(OH)2D3 promoted the expansion of Foxp3-expressing Treg populations and inhibited IFN-γ expressing Th1 and IL-4 expression Th2 cells in vivo during the development of aGVHD.

Several studies have reported that VD has positive effect on the treatment of aGVHD and Tregs are critical regulators of aGVHD (19,24). Silva et al. reported that treatment with VD appears to be effective, safe and inexpensive for the management of patients with chronic GVHD (25). Rosenblatt et al. also demonstrated that VD may have an important role in the prevention and treatment of aGVHD by hindering the maturation of DCs and inducing Foxp3 expressing Treg populations. Zahran et al. reported a strong association between the percentage of Treg phenotypes and VD level in term and preterm pregnant women with VD deficiency (26). Gorman et al. reported an increased proportion of Tregs in VD-treated mice (27). Present data had proved that 1α,25(OH)2D3 successfully increased the number of CD4+Foxp3+ cells both in vitro and vivo, in agreement with previous studies indicating that VD increases Treg populations in vivo. In mice injected with PC61, the effect of 1α,25(OH)2D3 was diminished, confirming that upregulation of Foxp3+ T cells is an important mechanism for 1α,25(OH)2D3 against aGVHD.

In vitro experiments found that 1α,25(OH)2D3 directly enhanced Foxp3 and IL-10 expression as well as the suppressive effects of Tregs 3 days after Treg induction. However, additional studies are needed to elucidate the mechanism by which 1α,25(OH)2D3 regulates the differentiation of iTregs. Such research should also consider other immune cells, including antigen-presenting cells, which exhibit significant cross-talk with Tregs. Dauletbaev et al. demonstrated that VD regulates inflammatory macrophages via downregulation of IL-8 expression (28). In addition, VD was shown to reduce IL-22 expression in innate lymphoid cells (29), and Vanherwegen et al. reported that VD modulates the function of dendritic cells to improve Tregs in glucose metabolism (30), which may indirectly cause the rise of iTregs.

Several previous studies have suggested that increased cytokine production contributes to the pathogenesis of aGVHD. We demonstrated that administration of 1α,25(OH)2D3 modulates the expression of inflammatory cytokines involved in the pathogenesis of aGVHD, such as IFN-γ, IL-4, and TNF-α. These results suggest that VD exerts potent anti-inflammatory activity via suppression of other Th cells. Our data thus indicate that 1α,25(OH)2D3 protects against aGVHD in part via modulation of cytokine expression.

In conclusion, we found that 1α,25(OH)2D3 improves the clinical course of aGVHD in a murine model. 1α,25(OH)2D3 induces the expansion of Treg populations and suppresses that of pro-inflammatory T cells. PC61 injection abolished the protective effect of 1α,25(OH)2D3 against aGVHD. In addition, 1α,25(OH)2D3 inhibits the proliferation of T cells in vivo, which is closely related to the engraftment of donor cells. These data suggest that 1α,25(OH)2D3 is a promising therapeutic candidate for preventing and treating aGVHD.

Ethical Statement: The authors are accountable for all aspects of the work in ensuring that questions related to the accuracy or integrity of any part of the work are appropriately investigated and resolved. Relevant legal and ethical requirements were followed carefully according to the protocol (number NMU08-092), which was approved by the Institutional Animal Care and Use Committee of Nanjing Medical University.