Hepatocellular carcinoma (HCC) is the most frequently occurring primary liver cancer which is the second leading cause of cancer-related deaths globally (1,2). Unfortunately, the incidence of HCC is still expected to increase, and its global trends and predictions regarding mortality are unfavorable in the future (3). Hypertension is a common cardiovascular disease and one of the most important causes of mortality in the world (4). Moreover, hypertension is still a common comorbidity in cancer patients, common adverse reaction of cancer therapies and a predictor of efficacy for cancer treatments (5-7). In previous reports, the rates of HCC patients with hypertension varied from 14.3% to 63.7% (8-10). Regardless of whether primary hypertension or secondary hypertension is associated with tumors, it can increase cancer mortality (11). Anti-hypertensive medication needs to be more carefully studied in cancer patients.

Furthermore, debate still exists on whether RASIs can reduce cancer risk and improve the outcomes of tumor patients (21-23). Hence, we assessed whether HCC patients with primary hypertension could benefit from the use of RASIs regarding time to recurrence (TTR) and overall survival (OS) after curative liver resection.

The inclusion criteria were as follows: (I) BCLC stages 0, A and B; (II) pathological diagnosis of HCC; (III) the minimum period between consumption of anti-hypertensive drugs and surgery was at least two weeks; (IV) Child-Pugh A or B liver function; and (V) no preoperative downstaging treatment. Patients with the following criteria were excluded: (I) recurrent HCC or combined hepatocellular-cholangiocarcinoma; (II) previous medical history of hepatic or other malignant tumor resection; and (III) perioperative mortality.

The diagnostic criteria for HCC were based on the modified WHO classification of tumors of the digestive system (24). The diagnosis and treatment of primary hypertension were identified and prescribed by the patients’ own cardiologists.

Data were extracted from medical records, updated and cross-checked and statistically analyzed. This study was approved by the Clinical Research Ethics Committee of Zhongshan Hospital, Fudan University (Shanghai, China). Written informed consent was obtained from all subjects before operation.

Patients were followed-up as in our previous report (25). TTR and OS were used as endpoints. TTR was calculated from the date of operation to the date when recurrence and/or metastasis was diagnosed. OS duration was defined as the interval between surgery and the time of death due to any cause. During the follow-up period, patients with recurrence or metastasis were treated with optimal therapeutic methods.

MedCalc statistical software (version 18.2.1) was used to analyze the data acquired from this study (26). Continuous variables were analyzed with Student’s t test or the Mann-Whitney U test, and categorical variables were compared with the Chi-squared test, Fisher’s exact test or Wilcoxon signed-rank test, where appropriate. Kaplan-Meier curves and log-rank tests were used to analyze TTR and OS. Forest plots were generated using the forestplot package (https://CRAN.R-project.org/package=forestplot) in R version 3.5.2 (http://www.r-project.org/). All significant variables filtered by univariate analysis were entered into a Cox proportional hazards regression analysis. All statistical tests were 2-tailed, and when the P value was below 0.05, the difference was considered statistically significant.

Figure 1 The flow chart of our study. HCC, hepatocellular carcinoma; RASI, the inhibitor of renin-angiotensin system. 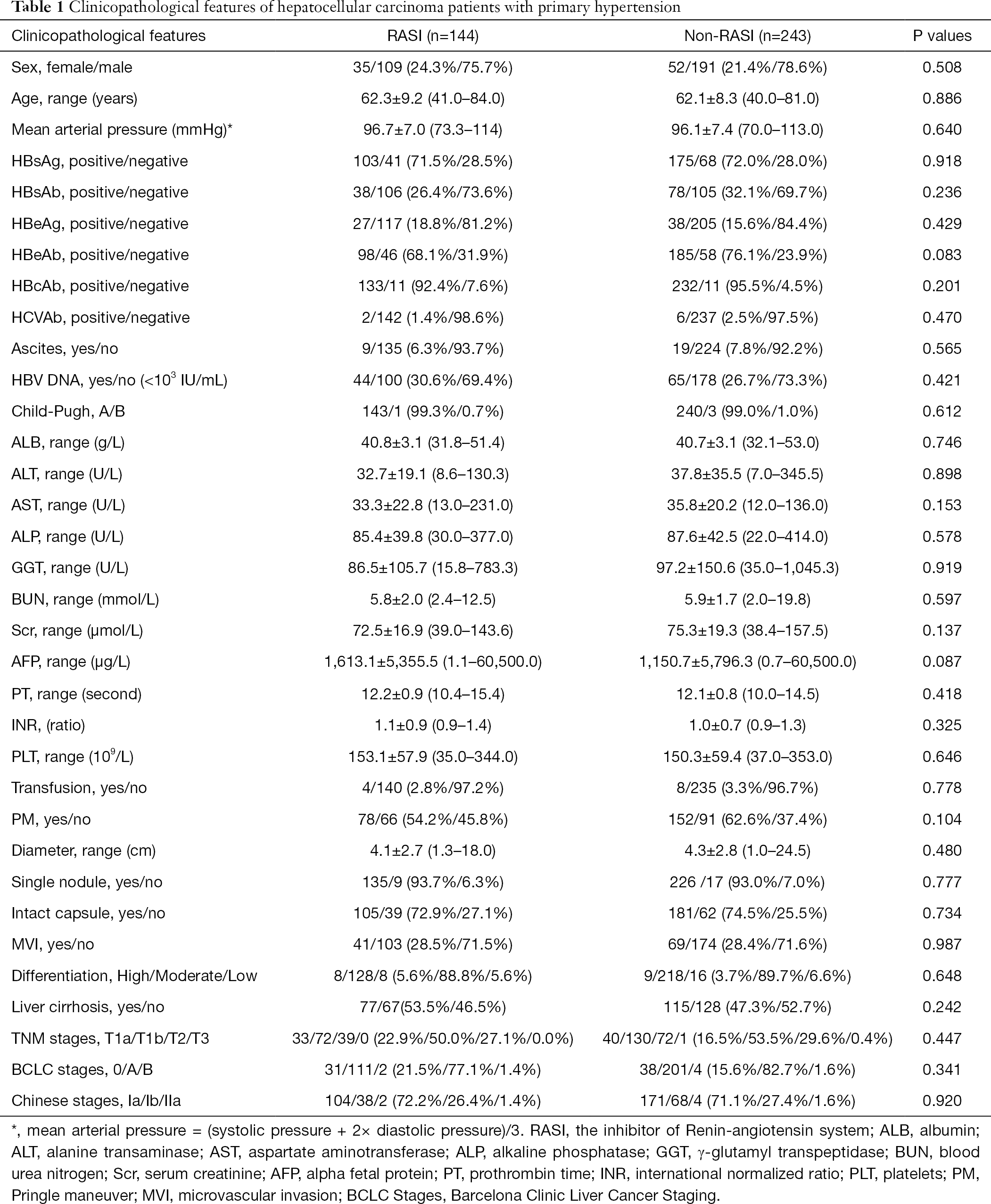 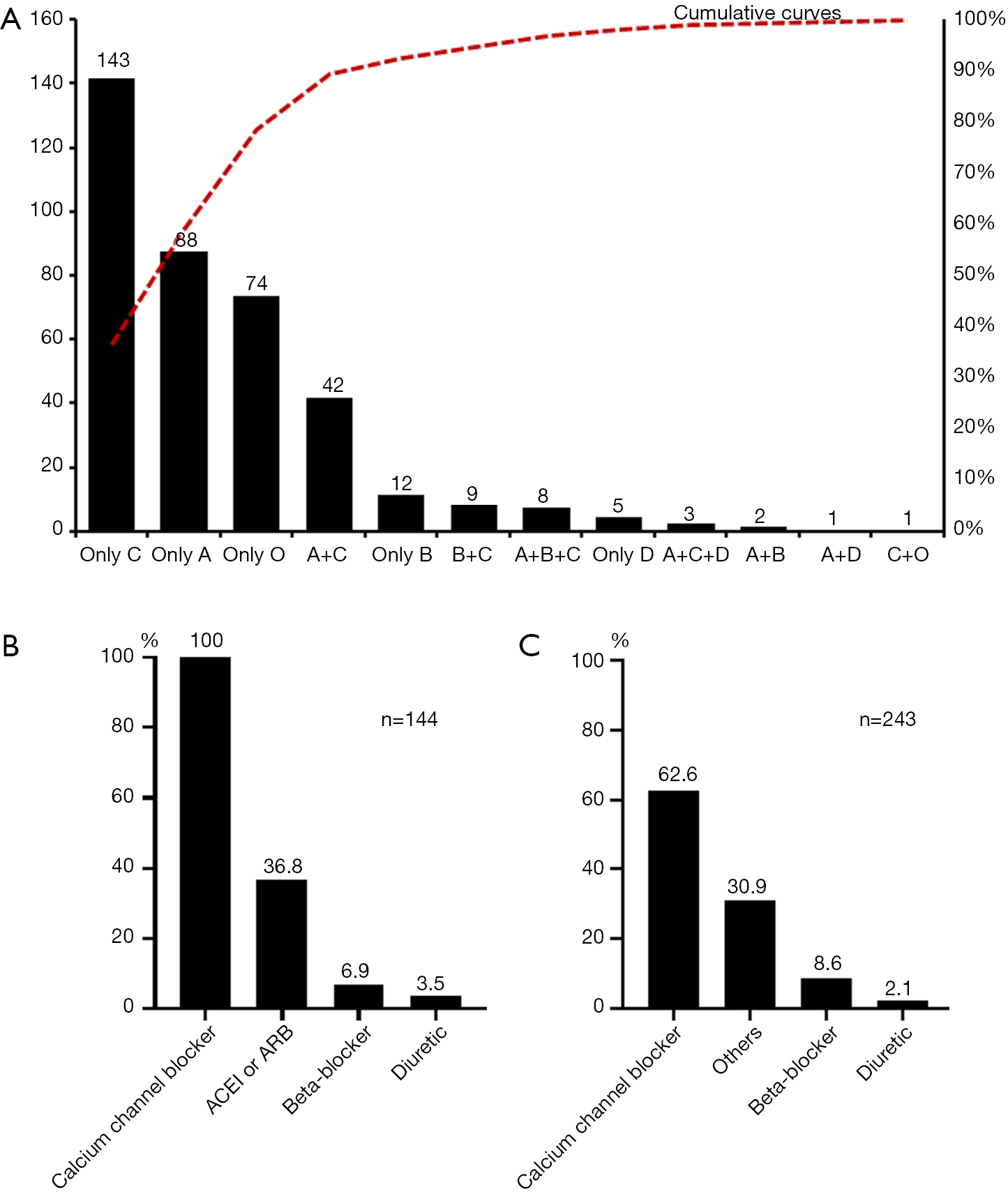 Recurrence, extrahepatic metastases and survival of the study cohort 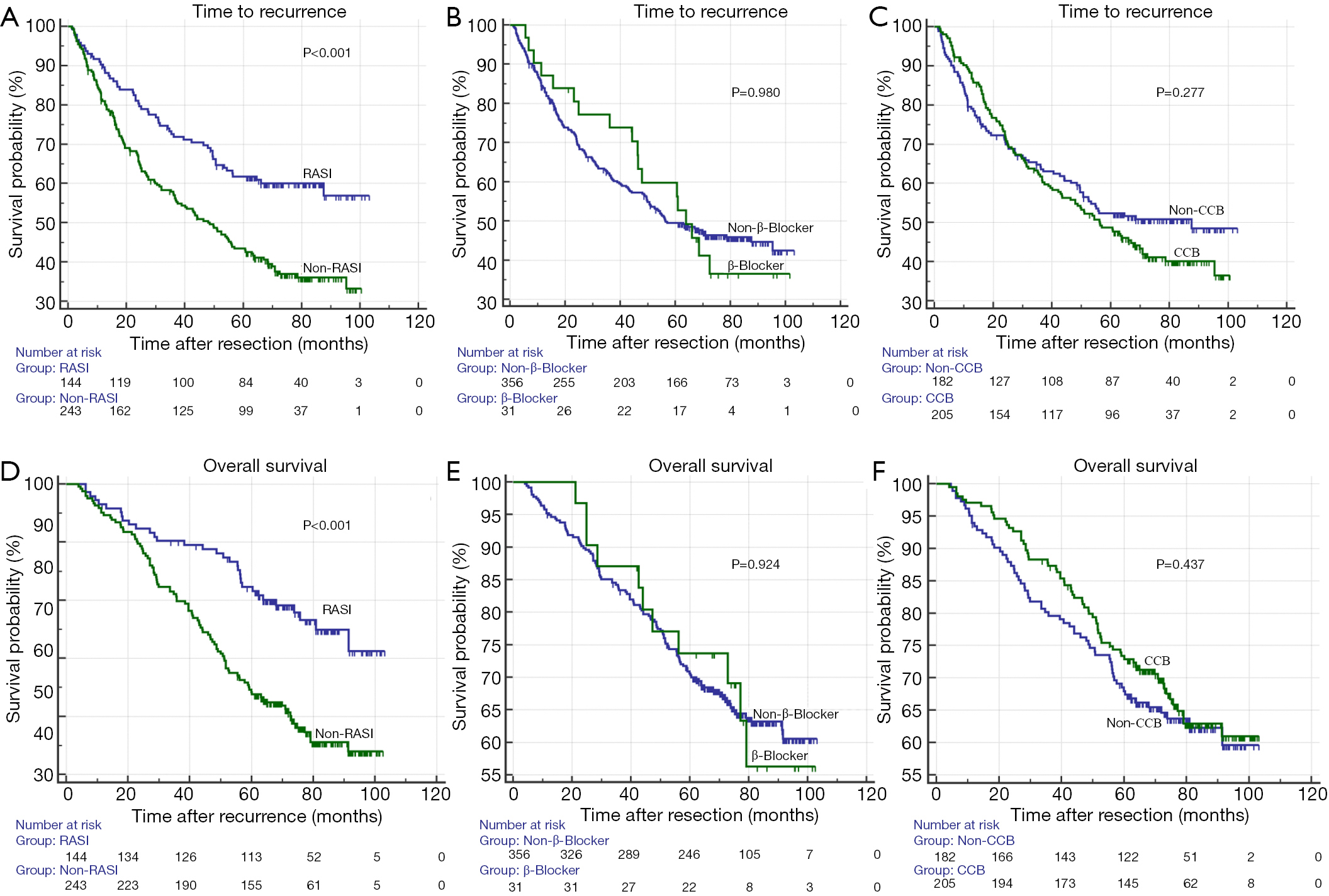 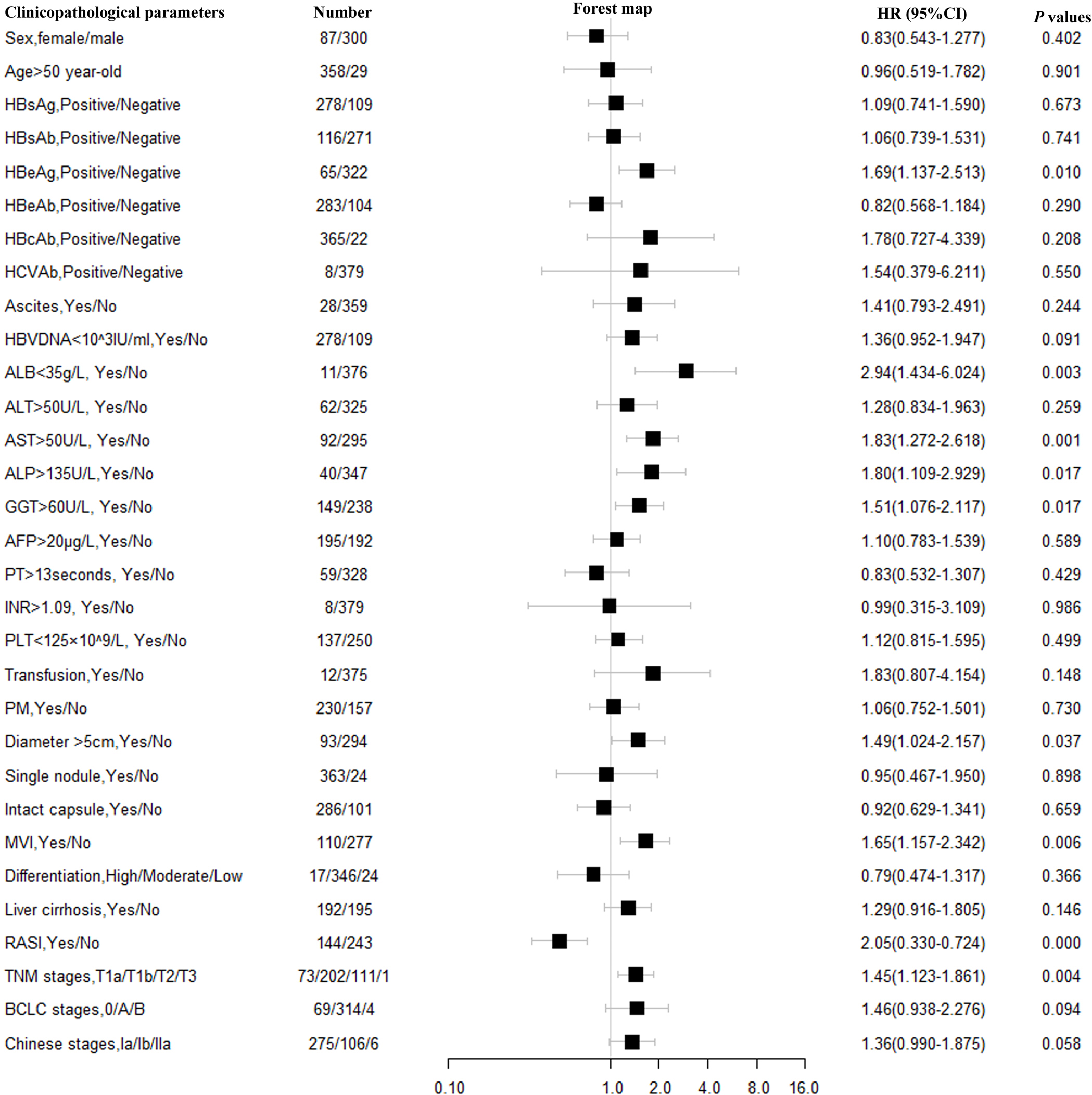 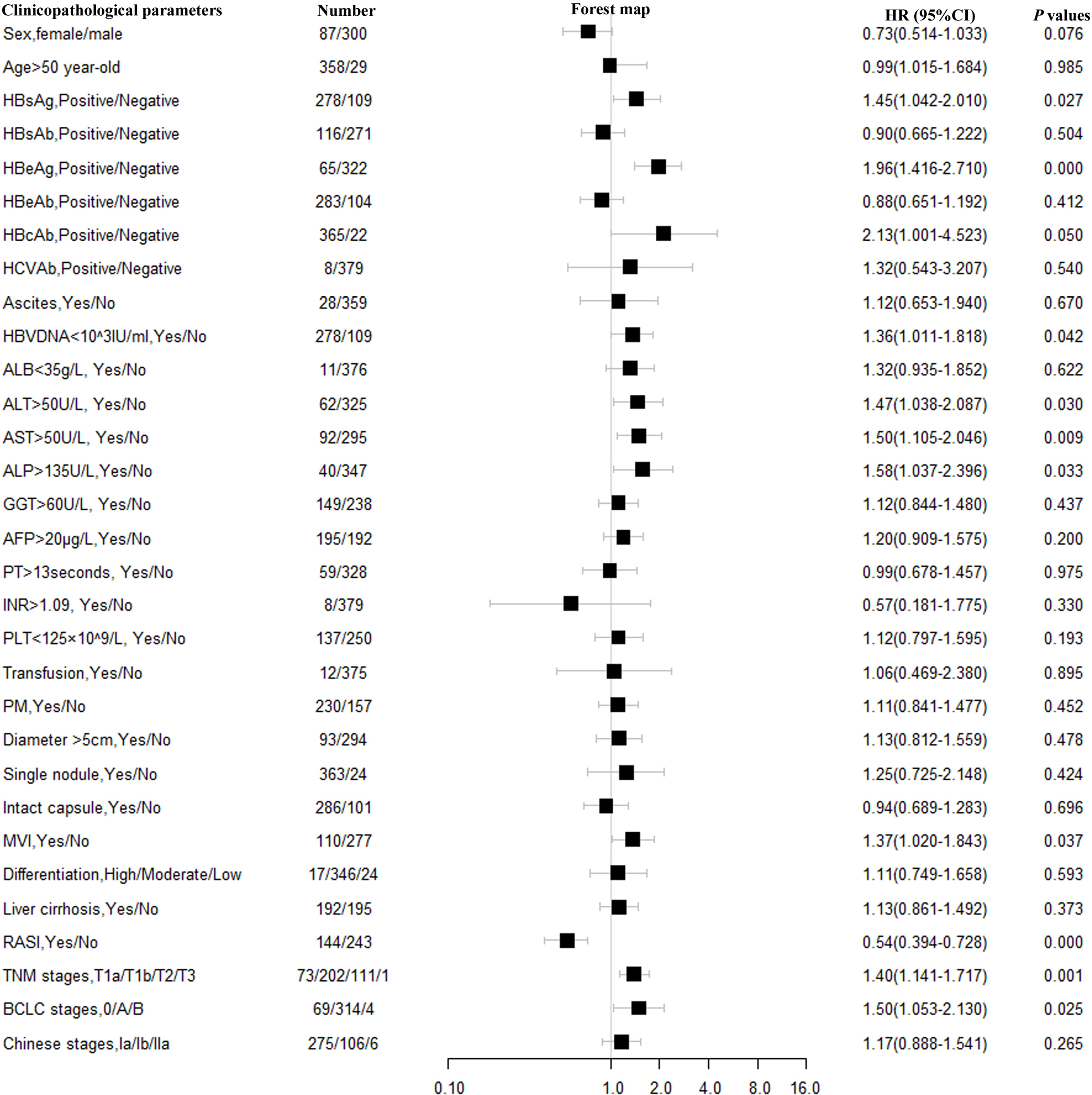 TTR and OS of HCC patients using ACEIs or ARBs

Although great progress has been made in the prevention and treatment of HCC, it is still a challenging problem due to its high recurrence rate and aggressiveness (27,28). In recent years, several conventional drugs, such as aspirin, beta-blockers and metformin, have become important supplemental therapies for malignant tumors (29-31). The RAS could also be a potential therapeutic target. There is still controversy regarding whether targeting the RAS can improve cancer treatment, but increasing supporting evidence has confirmed its feasibility and benefit (15,19). Our data demonstrated that RASIs using was associated with a better survival for HCC patients with primary hypertension after curative liver resection.

To reduce the baseline differences within the cohort, patients with BCLC stage 0, A and B disease were included in this study. Log-rank test demonstrated that patients in the RASI group had better TTR and OS than patients in the non-RASI group (Figure 2). Cohorts from our institution demonstrated that the use of RASIs was an independent prognostic factor for TTR and OS. Lungs are the main extrahepatic organs of hematogenous metastasis of HCC. In vivo, Ang II can promote pulmonary metastasis of tumors by activating adhesion molecules in vascular endothelial cells and inhibiting tumor angiogenesis, and these effects can be attenuated by RASIs (32-34). In our study, extrahepatic metastases of HCC were observed in 23 patients, and pulmonary metastasis occurred in 21 patients. Patients using RASIs had a lower rate of extrahepatic metastasis than patients not using RASIs.

However, the difference in prognosis could be caused by the potentially tumor-promoting effects of non-RASI use instead of the anti-tumor effects of RASI use (18). Beta-blockers were used to treat portal hypertension, and therefore could suggest an important comorbidity influencing survival (35,36). Hence, more groups of anti-hypertensive drugs were established, but no benefits were observed in group beta-blocker vs. non-beta-blocker and CCB vs. non-CCB (Figure 2). However, only 31 patients (8.0%, 31/387) took beta-blocker in our study and it need verifying with more cases.

Etiologically, HCC usually develops from hepatitis and fibrosis, and the Ang II/AT1R axis plays a crucial role in the pathophysiology of liver cirrhosis (1,37). RASIs may delay the progression of fibrosis, ameliorate liver function and improve prognosis (18,38-40). In our study, 71.8% (278/387) of HCC patients were infected with HBV and 3 cases were complicated with HCV. Kaplan-Meier curves showed that patients using RASIs also had a lower recurrent risk and longer survival; Cox proportional hazards regression identified that the use of RASIs was significantly associated with TTR and OS in our cohort (P<0.001 and P<0.001, respectively; Figures S4,S5; Table S1). 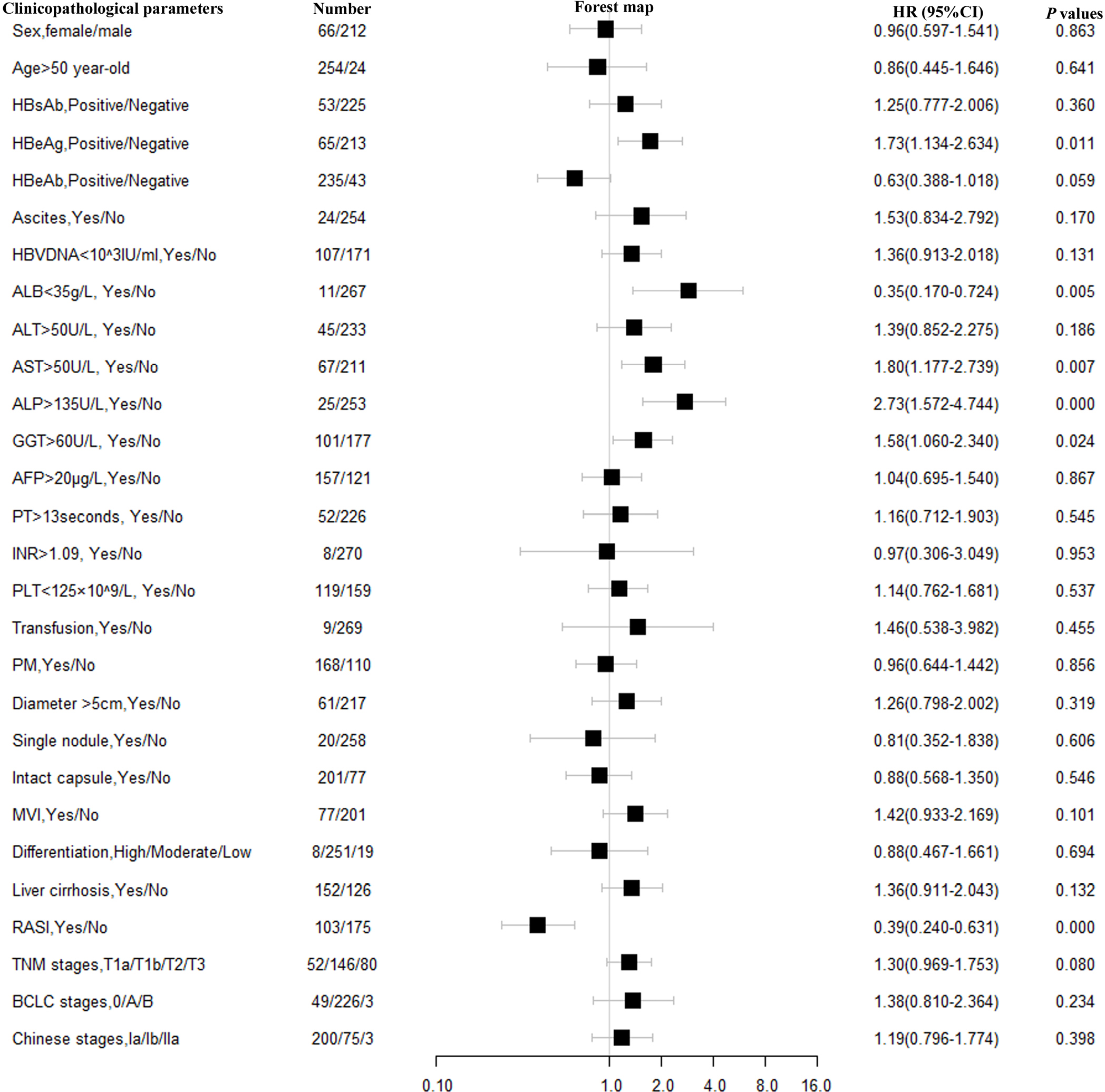 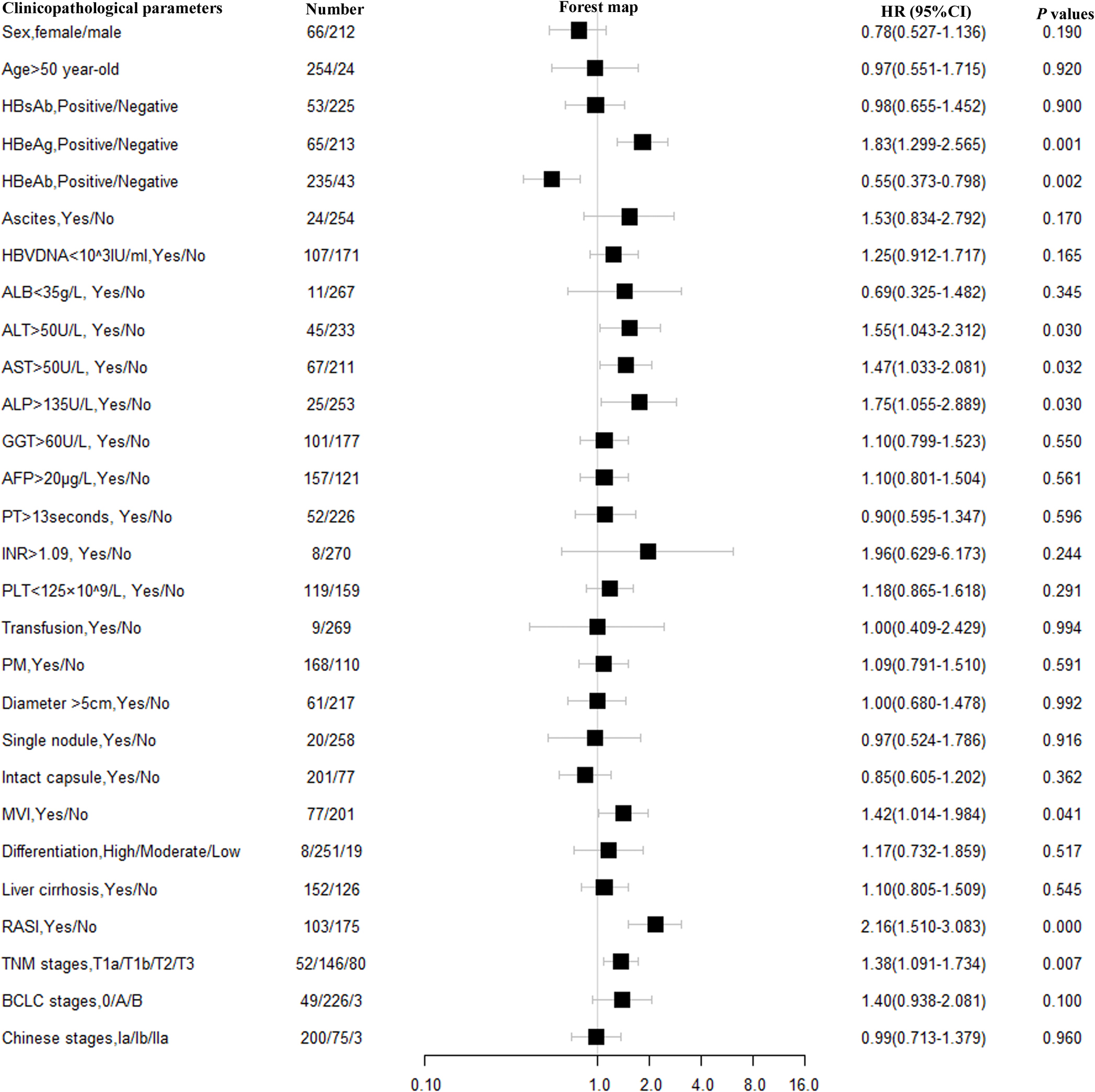 Theoretically, ARBs might theoretically exert better antitumor effects than ACEIs due to its switching action on Ang II receptors. It is because of its blocking that Ang II remains mainly bound to AT2R, which is considered to have negative effects on tumor biological behaviors (14,15). Coincidentally, a previous study not only reported that targeting the RAS could significantly prolong OS and RFS for early-stage HCC patients (BCLC stages 0 and A) after radiofrequency ablation but also demonstrated that patients using sartans (ARBs) had a better outcome than patients using ACEIs (20). However, these antitumor effects were not observed in our study (Figure 3). And some evidence has indicated that the Ang II/AT2R axis also promotes tumor progression via angiogenic and inflammatory pathways (41,42). Moderate increases AT2R expression have been shown to increase instead of decrease the growth of HCC tumors and the proliferation of HCC cells in vitro and in vivo (43).

Ang II can promote VEGF expression and induce angiogenesis (44). Anti-angiogenic therapies, e.g., sorafenib and lenvatinib, are standard of care for patients of advanced HCC, and hypertension is a commonly reported adverse effect of VEGF inhibitors (7). Interestingly, the combination of RASIs with sorafenib could improve OS in patients with advanced HCC and attenuate preneoplastic lesion development in a nondiabetic rat model of steatohepatitis (19,45). RASIs might be preferred Anti-hypertensive drugs for HCC patients with secondary hypertension attributed to the use of VEGF inhibitors. The RAS has significant influences on tumor progress via Ang II/AT1R axis, the Ang II/AT2R axis, the Ang [1–7]/MAS signaling pathway and other pathways, but these mechanisms have not been well explored in HCC (12,14,46-48). The antitumor mechanism of RASIs has not been explored or clearly understood.

Obviously, RASI was a kind of cardiovascular drugs instead of anticancer drugs preferentially and it might control cancer by remolding the tumor cells or reforming the tumor microenvironment instead of killing tumors directly (49). In previous clinical studies, it seemed that RASI significantly suppressed the cumulative HCC recurrence, and without prolonging patient survival (34). Probably, the beneficial effects on OS of RASI in HCC treatment could be more visible when the tumor burden was eliminated (curative resection or radiofrequency ablation) or it was combined with anticancer drugs (19,20).

There are several limitations in our study. First, the main limitation was the lack of information about the time of exposure to the anti-hypertensive drugs and there were some differences on the dosage, duration and therapeutic schedule of anti-hypertensive medicine among individuals inevitably. These might affect the results partly. Second, this was a retrospective study, and all cases were collected from one hospital. A prospective study should be designed, and the antitumor effects on HCC of RASIs should be performed using data from multiple research centers. Third, the time of death due to any cause represents a limitation since the benefit of the treatment should be calculated on the time to death due to causes related to HCC.

Although there were some limitations that might affect the results to a certain extent, we can still conclude that targeting the RAS was associated with a reduced risk of recurrence, decreased rate of extrahepatic metastases and prolonged survival of HCC patients with primary hypertension after curative liver resection, RASIs may be preferred over other Anti-hypertensive drugs among HCC patients with hypertension, and targeting the RAS could be a supplemental therapeutic strategy for HCC.

Funding: This work was supported by the Leading Investigator Program of Shanghai municipal government (17XD1401100), the National Key Basic Research Program (973 Program; 2015CB554005) from the Ministry of Science and Technology of China, and the National Natural Science Foundation of China (81672326).

Ethical statement: The authors are accountable for all aspects of the work in ensuring that questions related to the accuracy or integrity of any part of the work are appropriately investigated and resolved. This study was approved by the Ethics Committee of Zhongshan Hospital, Fudan University (Approval No. B2012-010). Written informed consent was obtained from all subjects before operation.