Infantile hemangiomas (IHs) are the most common tumor of infancy, with a prevalence estimated at 1–10% of the infants worldwide. IHs most often appear on the head, neck, and trunk and some patients will experience complications, such as pain, ulceration and functional limitation (1). Previous studies indicate that decreasing gestational age, low birth weight, and female predominance are closely associated with higher IH incidence (2). In 2008, Léauté-Labrèze et al. reported the success to treat hemangioma with propranolol (3), which leads to a revolution of IH management, and the use of propranolol has come to the forefront because of its efficacy and minimal side effect. Since then, propranolol and other beta-adrenergic receptor antagonists have become the first-line treatment instead of corticosteroid therapy. For superficial IHs, topical beta-adrenergic receptor antagonists have been commonly used (4-6) and oral propranolol has become the standard treatment for high-risk and deep IH (7). However, the clinical response rate of the first-line treatment with propranolol is around 90% and there are still cases with large size or serious complications or low sensitivity to propranolol can not receive notable improvement after beta-adrenergic receptor antagonists (7,8). Therefore, a combination of prednisone and beta-adrenergic receptor antagonists is brought to the forefront (9-13) by several investigators. There were few studies in this filed, however, higher dose or longer duration of prednisone were used, or fewer cases were reported.

In this study, we summarized our experiences of treating refractory IH patients with a combination of low dose and short duration prednisone and beta-adrenergic receptor antagonists, which demonstrated a promising perspective for these cases.

We conducted the retrospective cohort study of refractory IH patients between June 2014 and June 2018 at our outpatient clinic at the Department of Oral and Maxillofacial Surgery, Shanghai Ninth People’s Hospital, Shanghai Jiao Tong University School of Medicine. Patients that fulfilled our inclusion and exclusion criteria were consecutively enrolled. The inclusion criteria was: patients who received oral propranolol at least 1 month after treatment initiation; the hemangioma score value was evaluated before and after oral propranolol treatment, and the hemangioma score variations were defined as ≤1; parents or guardian of patients gave written informed consent. The exclusion criteria included hypersensitivity to propranolol, heart defects or arrhythmia. Patients were followed up through outpatients and by mobile application or phone call, if necessary.

This study was carried out in accordance with the recommendations of Declaration of Helsinki. The protocol was approved by the Institute Review Board of Shanghai Ninth People’s Hospital (SH9H-2019-T272-1). All parents or guardian of participants of this study gave written informed consent in accordance with the Declaration of Helsinki for the participation in the study, and the publication of identifiable images at the initiate prescription.

Patients were divided into two groups retrospectively depending on whether received additional oral prednisone. For patients in group 1, prednisone (Shanghai Sine Pharmaceutical Laboratories Company, China) was used only for one month at a dose of 1 mg/kg every other day and other drug administrations were as the same as the patients (group 2) who received monotherapy of beta-adrenergic receptor antagonists. The drug administrations were continued until objective goals were obtained or no further improvement was achieved.

Until now, no standardized or validated method exists for outcome measurement of hemangiomas. Because the goal of treatment was minimizing functional and cosmetic impairment, we modified the semi-quantitative hemangioma score system (6) to evaluate the therapeutic effects. The outcomes of each patient were evaluated based on the improvement of color, size, surface consistency, firmness, depth and functional disturbance (as shown in Table 1). Evaluation of the improvement was conducted twice by the other two independent physicians when the first visit, the diagnosis of refractory IH made, one month after oral prednisone and after the full course of treatment. Therapeutic response was assessed by the percentage of changes in score values as follows: excellent response (75–100%), good response (50–75%), fair response (25–50%) and poor response (0–25%). 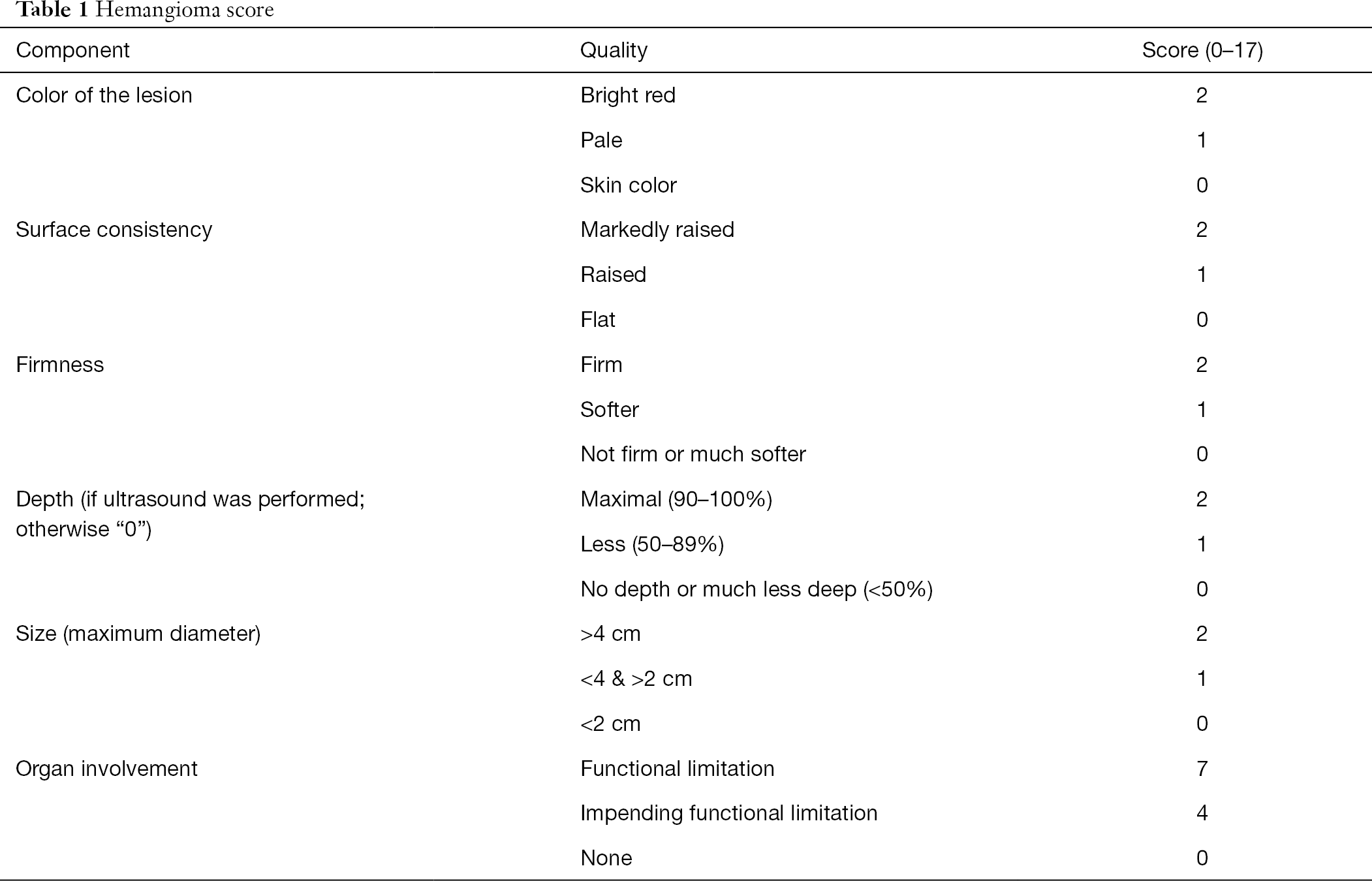 Statistical analysis was performed using the SPSS software package (version 16.0; SPSS, Chicago, IL) and R program. Descriptive data were expressed as number, percentage, or means ± standard deviation. Wilcoxon test was used to compare the clinical response at different groups and based on the percentage of changes in score values. Spearman rank correlation was used to analyze the correlation between clinical characteristics and the percentage of changes in score values. Orient logistic regression analysis was used to determine the important factors to the treatment response. P value <0.01 were considered significant.

Eighty-six patients were identified as eligible for the study because their hemangioma score variations were defined as ≤1. Ten were excluded because of missing data. The remaining 76 made up the cohort. The mean age when the diagnosis of refractory IH was mad was 5.52 (±2.85) months, and 54 patients (71.05%) were female. The detailed histological features were in Table 2. 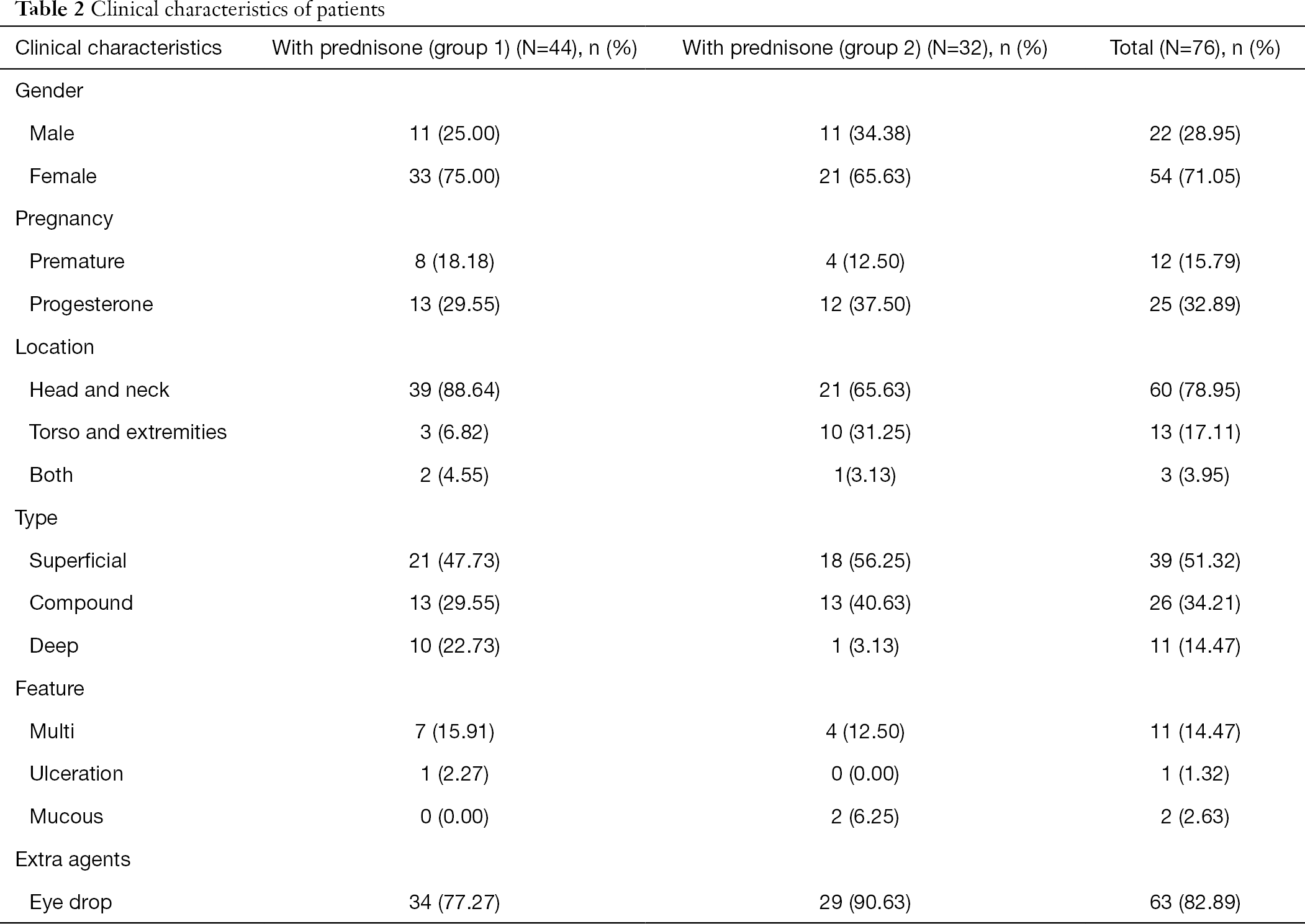 Based on the treatment regimen, the cohort was divided into 2 groups, forty-four patients who received combined treatment of propranolol and prednisone were assigned to group 1, and thirty-two patients who received monotherapy of propranolol were assigned to group 2 as control. Patients with superficial, compound but no mucosa IHs (n=63) received extra topical 0.5% timolol maleate eye drops, among them, thirty-four were in group 1 and twenty-nine were in group 2.