Characterization of LAG-3, CTLA-4, and CD8+ TIL density and their joint influence on the prognosis of patients with esophageal squamous cell carcinoma

Esophageal cancer is a common malignant tumor of the digestive tract. Patients with esophageal squamous cell carcinoma (ESCC) (mainly in Eastern countries) suffer from high mortality rates, with a 5-year survival rate of less than 20% (1). At present, the treatment strategies for patients with ESCC mainly include cytotoxic chemotherapy, radiotherapy, and surgery. These modalities convey small survival benefits and significant adverse effects on patients (2,3). Therefore, finding novel and more effective therapeutic strategies for patients with ESCC remains an urgent need.

The last decade has witnessed the rapid development of immunotherapy, which can reverse tumor immune escape mechanisms by suppressing immune checkpoints (4). The inhibition of cytotoxic T-lymphocyte-associated antigen-4 (CTLA-4) can activate T cells to eliminate tumors (5,6). The inhibitors of CTLA-4 have shown promising efficacy in a variety of cancers (7,8). However, the efficacy of anti-CTLA-4 antibodies is still unproven in ESCC. Moreover, less than 20% of patients are expected to benefit from anti-CTLA-4 therapy (9), which highlights the necessity for further investigation into other checkpoint modulators in patients with ESCC, especially those associated with adaptive resistance to CTLA-4 inhibition.

Lymphocyte activation gene-3 (LAG-3) is another important immune checkpoint which belongs to the immunoglobulin superfamily. LAG-3 is expressed in various kinds of immune cells, including tumor-infiltrating lymphocytes (TILs), which play a key role in inhibiting T cell proliferation, activation, and homeostasis (10,11). LAG-3 is not only a surface molecule selectively upregulated on regulatory T (Treg) cells but also a key modulator of maximal Treg activity (12,13). LAG-3 can downregulate CD4+ T cell activity through binding with the major histocompatibility complex II (MHC class II) (14,15). Similarly, CTLA-4 can enhance Treg immunosuppressive activity and downregulate CD4+ T cell activity, which may have a synergistic effect with LAG-3 (6,12,16). It has been reported that LAG-3 expression on TILs was significantly correlated with that of programmed death 1 (PD-1) on TILs and programmed death ligand 1 (PD-L1) on tumor cells (17). However, the relationship between LAG-3 and CTLA-4 on TILs has not been investigated. LAG-3 has been demonstrated to be a favorable prognostic factor in ESCC (18,19) in contrast to its negative prognostic impact in other cancers, including head and neck squamous cell carcinoma, gastric cancer, and lung cancer (17,20,21). In order to promote and optimize the future application of immunotherapy in operable ESCC, we aimed to comprehensively explore the clinicopathological features of LAG-3 expression and the association between positive LAG-3 expression and clinical outcomes in patients with ESCC after surgical resection. More importantly, we also assessed the relationships between LAG-3, CTLA-4 expression, and CD8+ TIL density and further investigated the prognostic value of the different combinations of these three markers.

We retrospectively reviewed 261 patients with esophageal cancer who underwent surgical treatment in our department in the Second Affiliated Hospital of Soochow University, China, from January 2009 to December 2014. The patients in our study had to meet the following inclusion criteria: (I) patients that had not undergone any systemic therapy before surgery, and (II) patients who were pathologically confirmed with primary squamous cell carcinoma. The exclusion criteria were (I) patients with autoimmune diseases and other kinds of esophageal cancer (e.g., adenocarcinoma), (II) patients lost to follow-up, and (III) patients with concurrent multiple primary tumors or other malignancies. According to the criteria, 78 patients were excluded, while 183 patients were included in the current study. This study was approved by the Institutional Review Board of the Second Affiliated Hospital of Soochow University. Because of the retrospective nature of this study, the informed consent of patients was waived.

Three serial 4-µm-thick formalin-fixed paraffin-embedded tissue sections were taken from the same tumor specimen for LAG-3, CTLA-4, and CD8+ staining. First, the sections were deparaffinized and rehydrated, and endogenous peroxidase was quenched with 10% H2O2 at room temperature for 10 min. After this, nonspecific proteins were blocked with 10% goat serum for 1 h. The sections were then rinsed and incubated with the detection antibody [LAG-3 (Abcam, ab40465, China), CTLA-4 (Biorbyt, orb385624, China) and CD8+ (Abcam, ab4055, China)] overnight at 4 °C. The DAB Horseradish Peroxidase Color Development Kit (Beyotime, China) was used for color development after incubating with horseradish peroxidase conjugated secondary antibody at room temperature for 30 min. Cell nuclei were counterstained with hematoxylin, and the slides were dehydrated in an ethanol gradient, mounted with neutral gum, and stored for downstream analyses.

All specimens were determined by two experienced independent pathologists who were blind to the data (Li F and Zhang Y). Five visual fields were randomly selected in each section. Cells were regarded as positive if the cell membrane and/or cytoplasm stained brown. The intensity of staining and the percentage of positive cells were evaluated in all sections, and the final score was derived from the multiplication of the two parameters. The scoring system for staining intensity was as follows: one point, absent/weak staining; two points, moderate staining; three points, strong staining. The scoring system for the percentage of positive cells was as follows: one point, 33%; two points, >33% to 66%; three points, >66%. Sections with a final overall score of ≤3 were defined as the LAG-3 or CTLA-4 negative expression group; other sections were defined as the high expression group (22,23). CD8+ TIL density was evaluated both in the tumor parenchyma and mesenchymal area and was defined as low CD8+ TIL density if infiltration was <1% in the parenchyma and <10% in the mesenchyme at the same time, and defined as high CD8+ TILs density for other values (24). A consensus was reached after discussion if there were controversies or discordance in terms of immunohistochemical evaluation.

All clinical data are shown as mean ± standard deviation and n (%). We performed the chi-square test to assess the correlation between LAG-3 and clinical pathological variables. Spearman’s rank correlation analysis was used to analyze the association between LAG-3 and CTLA-4 or CD8+. We used variables of P<0.2 for a logistic regression model to investigate the independent predictive factors of LAG-3 expression. Also, the log-rank test was used to compare the survival for distinct groups of a variable. To evaluate the independent predictive factors for recurrence free survival (RFS) and overall survival (OS), a Cox proportional hazard regression model was applied to evaluate the prognostic impact of a potentially survival-related variable. The survival curves were estimated by the Kaplan-Meier method. Statistical analyses were performed in SPSS 25.0 (IBM Corporation, Armonk, NY, USA). In addition, we used the Tumor IMmune Estimation Resource (TIMER, a website based on the Cancer Genome Atlas database, https://cistrome.shinyapps.io/timer/) to explore differential gene expression in tumors and normal tissues as well as the correlation between LAG-3 and CTLA-4, which served as external validation. In our study, a two-sided P value of less than 0.05 was considered statistically significant. 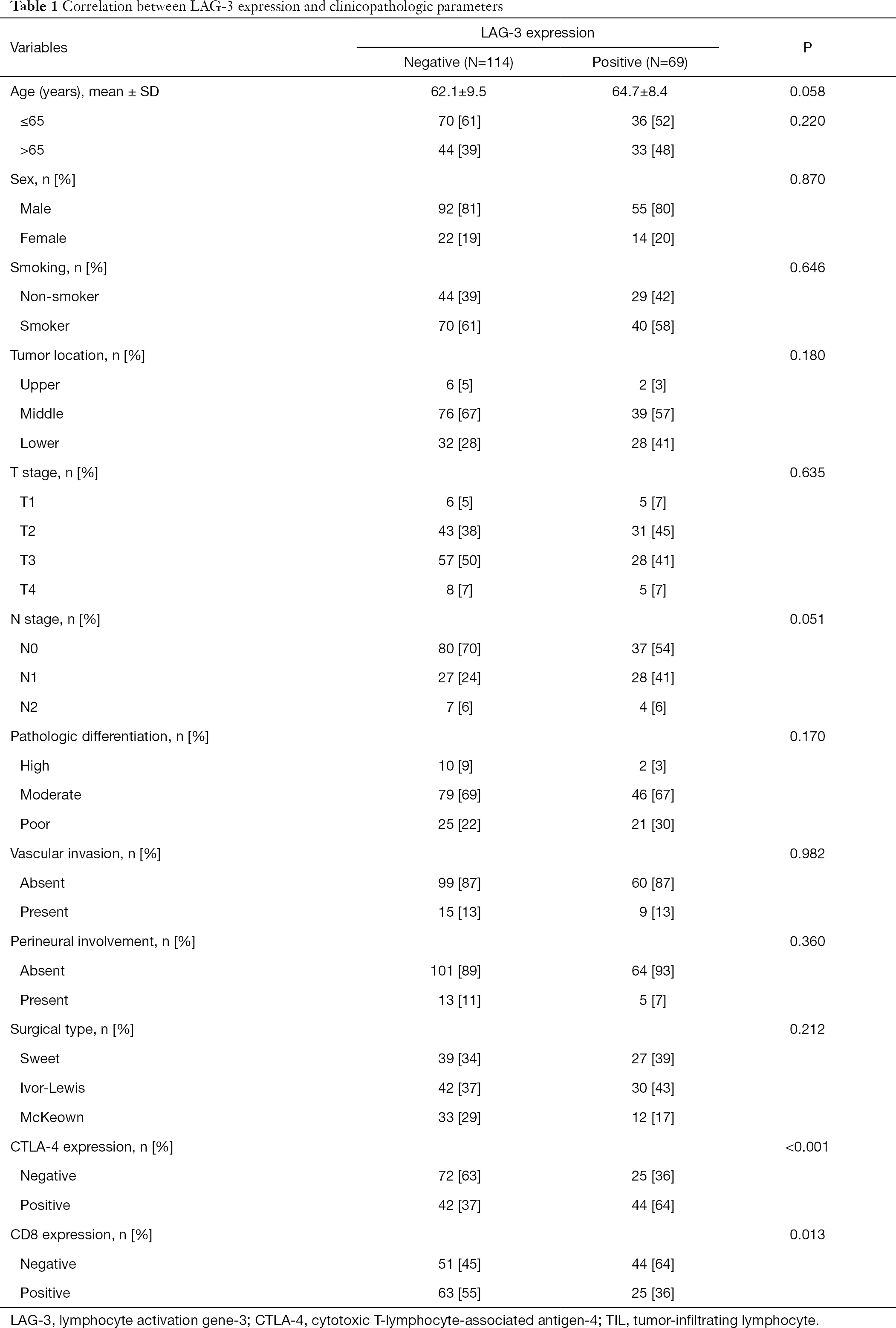 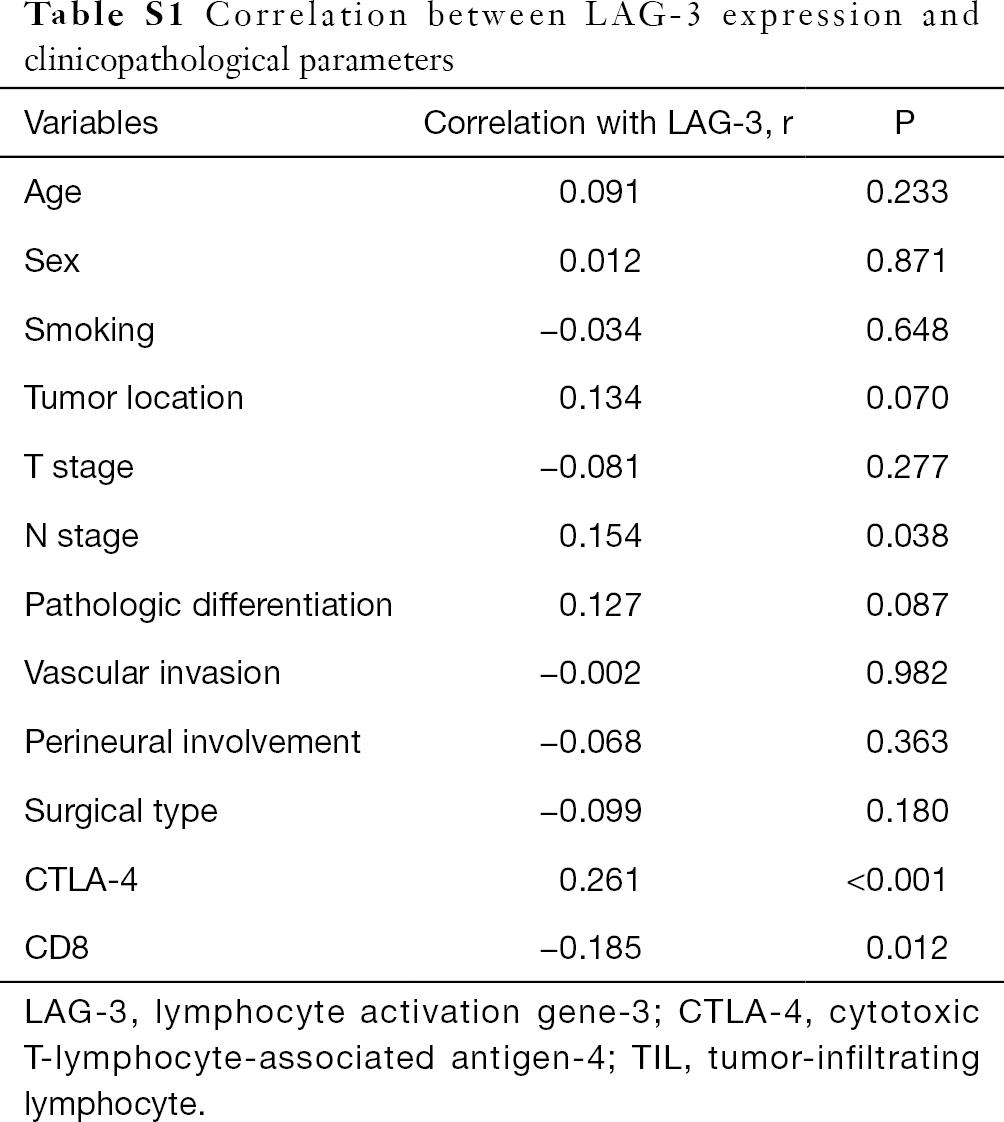 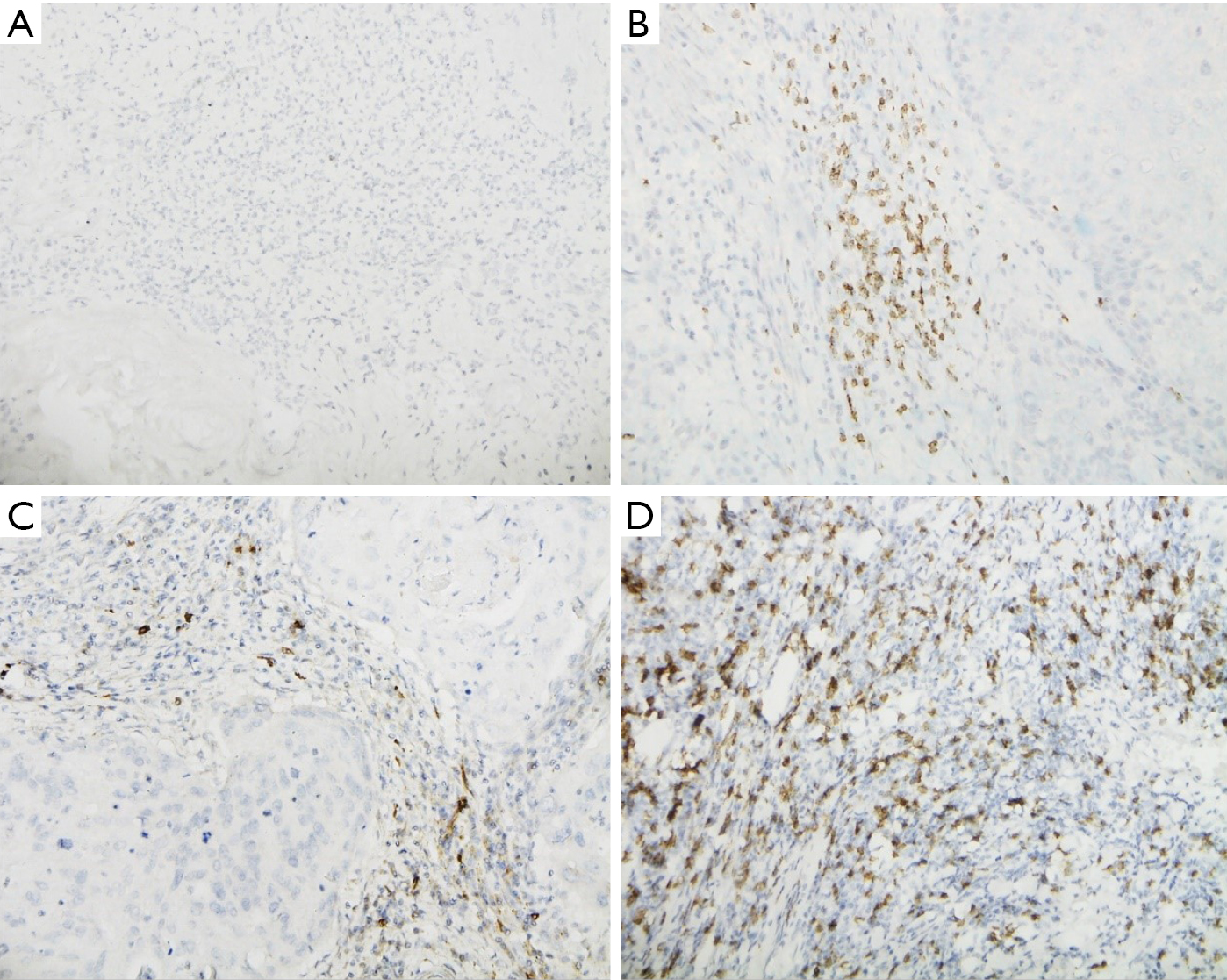 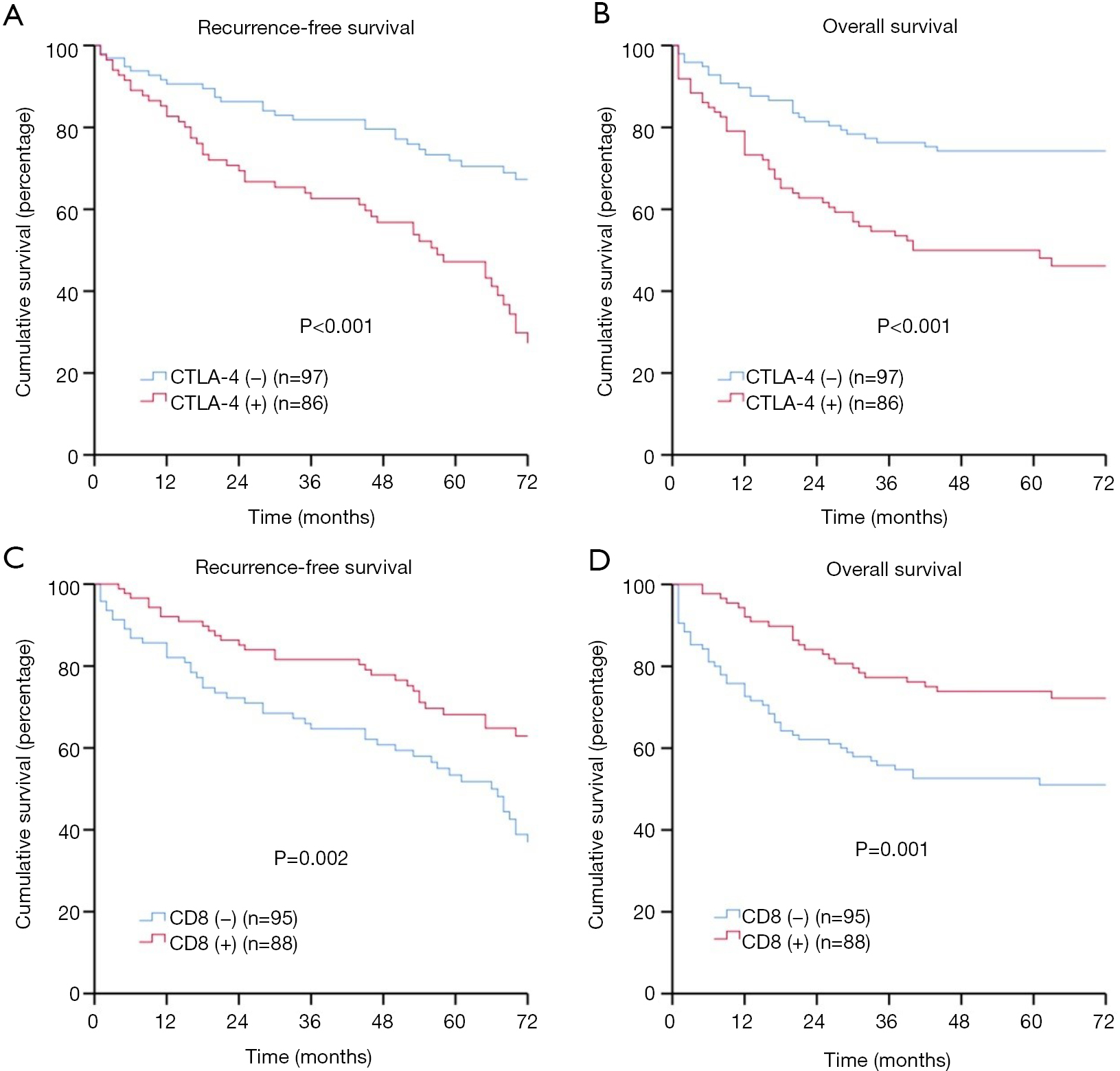 Correlation between a combination of LAG-3 and CTLA-4 expression and/or CD8+ TIL density, and clinical outcomes 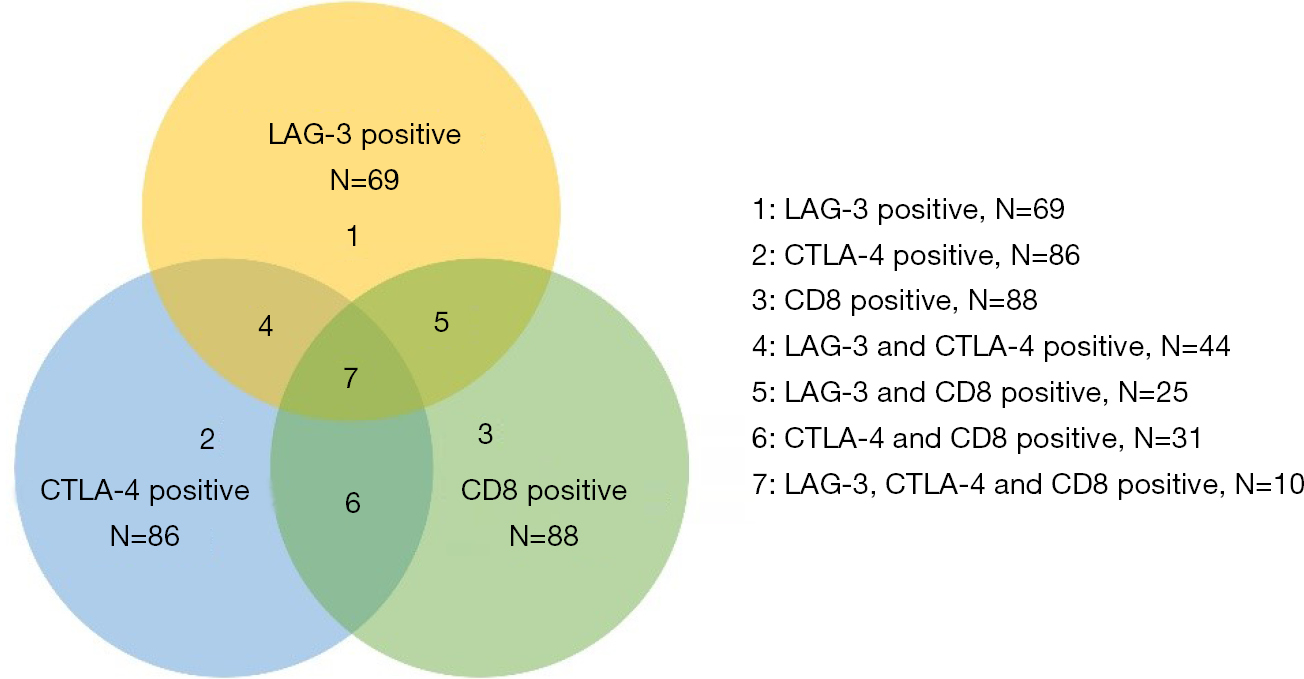 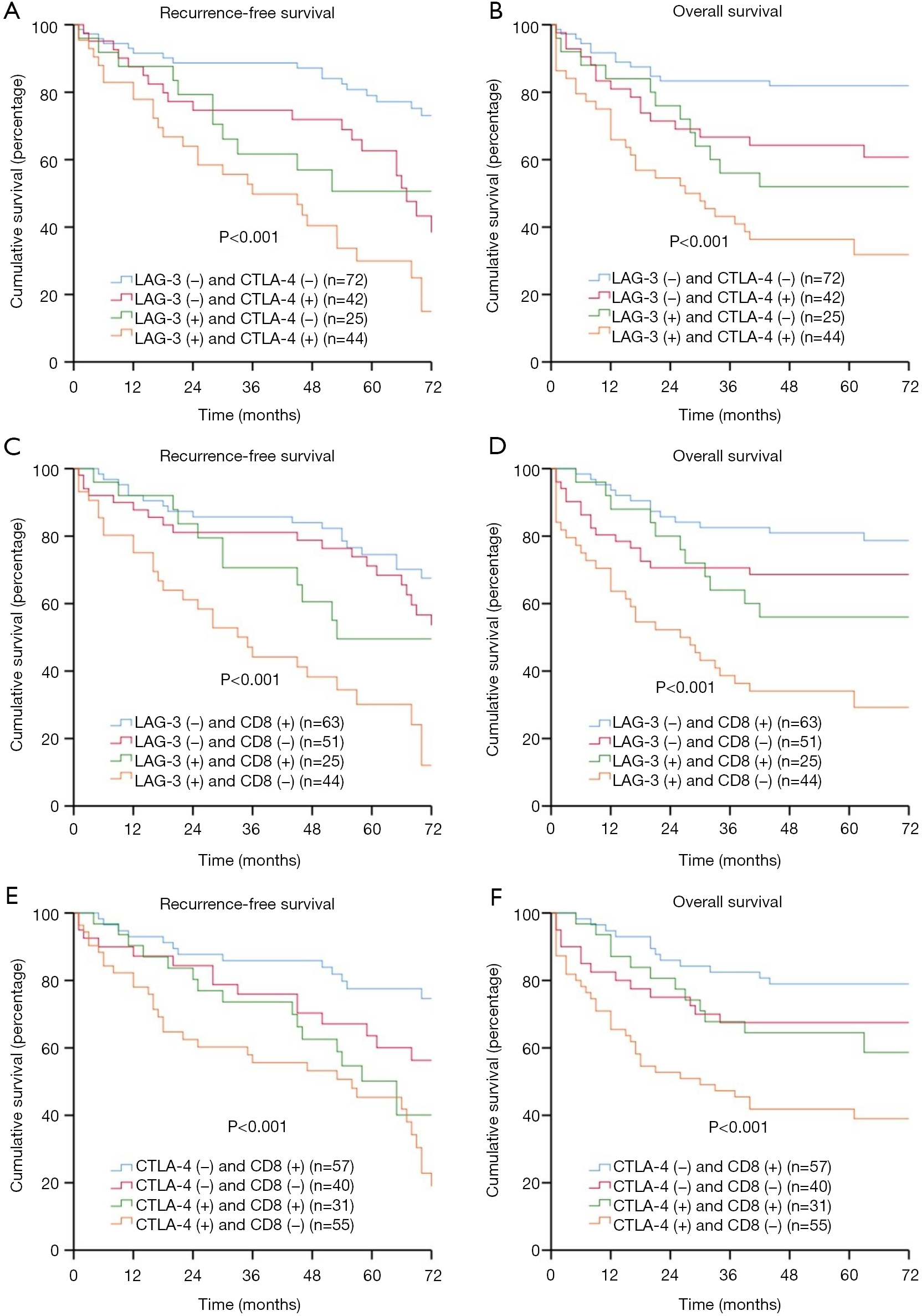 Multivariate analysis of RFS and OS 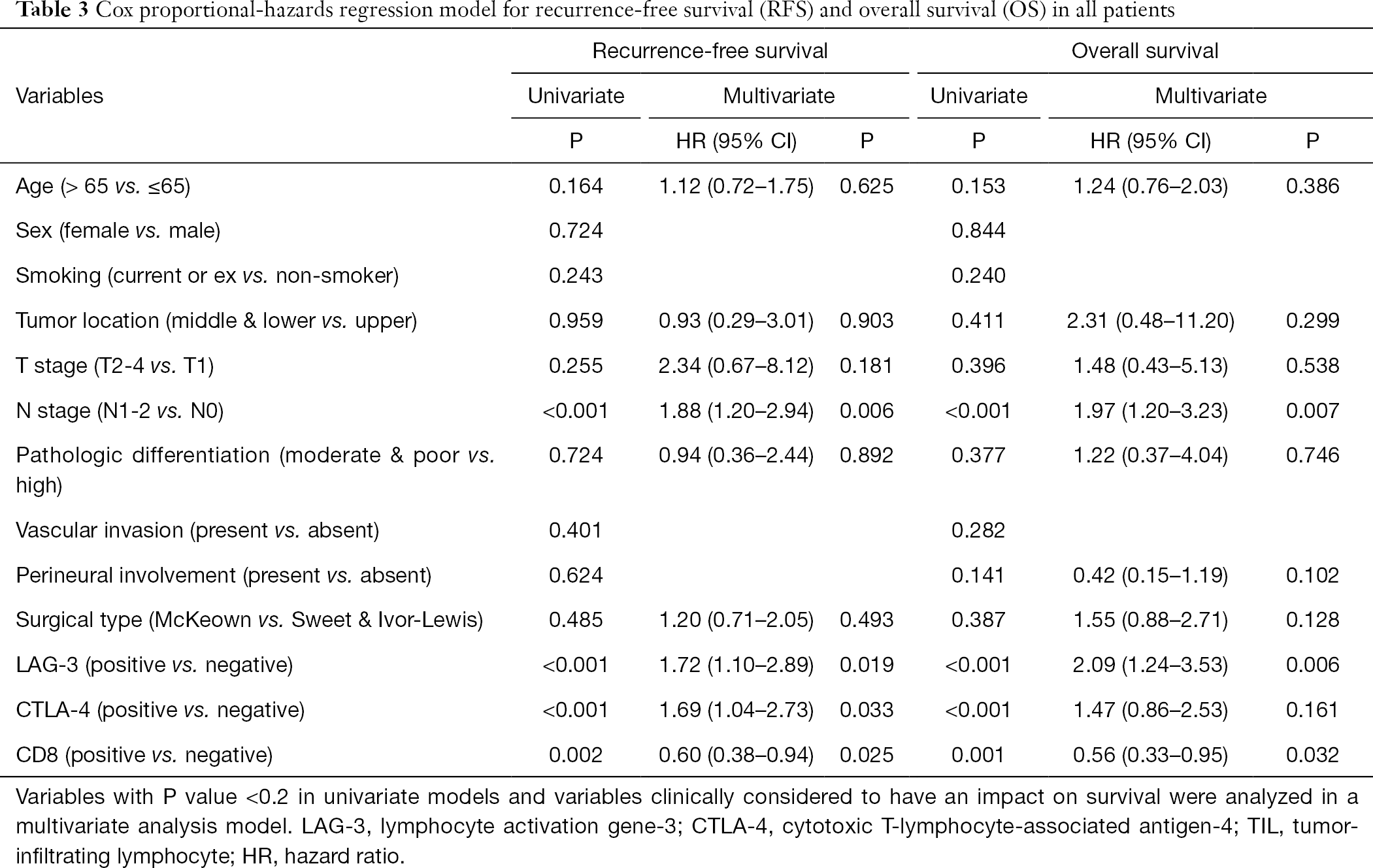 As shown using TIMER, the respective expression level of LAG-3 and CTLA-4 in tumor tissues was significantly higher than that in normal tissues (LAG-3: P<0.05; CTLA-4: P<0.001) in patients with esophageal cancer (Figures S3,S4). Furthermore, LAG-3 expression levels were significantly correlated with CTLA-4 expression levels in tumor tissues (r=0.781; P<0.001) (Figure S5), which partly supported our results. To the best of our knowledge, this is the first study to characterize LAG-3 and CTLA-4 expression, along with their prognostic significance in patients with surgically resected ESCC. We found that CTLA-4 positivity was an independent predictive factor for LAG-3 expression. Moreover, positive LAG-3 expression, positive CTLA-4 expression, and low CD8+ TIL density were independent predictors of worsening RFS and OS. The combination of these three markers could further stratify patients into different subgroups with distinct prognoses. 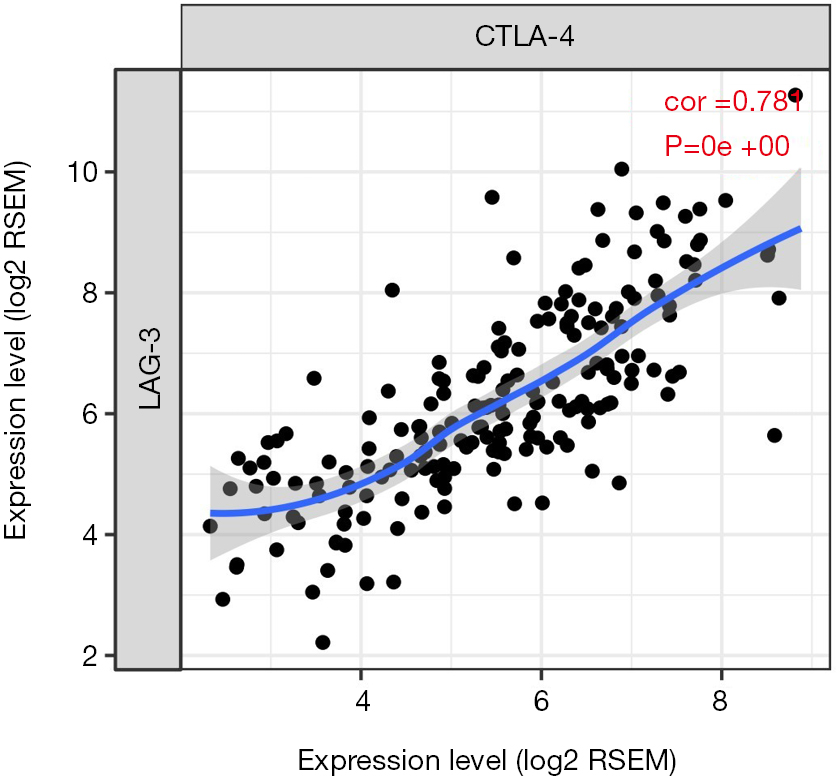 The use of immunotherapy is a milestone for cancer treatment, which activates the immune system to eradicate tumor cells. However, the exact clinical utility of immunotherapy for ESCC is still unclear. LAG-3 is a promising target because it is one of the key inhibitory receptors that contributes to T-cell exhaustion (25). Anti-LAG-3 inhibitors can activate T effector cells and reduce the immunosuppressive activity of Tregs, whereas anti-PD-1 and anti-PD-L1 inhibitors do not reduce the activity of Tregs (26). Furthermore, studies have reported that LAG-3 plays an important role in the immune response and the relative safety of anti-LAG-3 inhibitors in animal models (27).

Additionally, LAG-3 inhibitors (such as Relatlimab, IMP321, BMS-986016, LAG525, MK-4280, TSR-032) have entered clinical trials for different cancers, either alone or in combination, and are showing promising efficacy (28-30). It was reported that the blockade of LAG-3 and other checkpoints could synergistically enhance T-cell activity and anti-tumor immunity (31). However, there has been no study characterizing the relationships between LAG-3 and CTLA-4. Since LAG-3 and CTLA-4 have similar effects in suppressing the immune system by down-regulating CD4+ T cells and enhancing Tregs, blockade of LAG-3 may help overcome the adaptive resistance of CTLA-4 inhibitors, which could also be helpful in improving CTLA-4 inhibition-based therapy. Therefore, anti-LAG-3 inhibitors may exhibit greater efficacy in the future immunotherapy of ESCC patients with positive LAG-3 expression (32).

Two previous studies have demonstrated that LAG-3 was a favorable prognostic factor for patients with ESCC (18,19), which conflicts with our results. The potential reason for this discrepancy may be attributed to the following: (I) different analytical methods and (II) different definitions of positive LAG-3 expression. Specifically, expression levels based on immunohistochemical staining may be different from those measured by mRNA microarrays. Also, an optional cut-off value for defining high and low LAG-3 expression may affect the survival analysis of the patients. More importantly, the two studies mentioned above demonstrated that the expression of LAG-3 in tumor tissues was significantly higher than that in surrounding tissues, and blocking LAG-3 could activate CTLs, suggesting that LAG-3 may be involved in tumorigenesis, and therefore, the blockade of LAG-3 may activate the immune system.

As shown in our study, positive LAG-3 expression significantly correlated with positive CTLA-4 expression. The combination of different expression levels among LAG-3, CTLA-4, and CD8+ could stratify patients into more detailed subgroups. According to the Kaplan-Meier curves for RFS and OS, the expression of a single immune checkpoint is not enough to determine the use of an immune inhibitor. For instance, when CTLA-4 and CD8+ expression was positive, the prognosis was not affected regardless of LAG-3 expression. Therefore, when positive LAG-3 expression was detected alone, substantial survival benefit would not be obtained in patients treated with anti-LAG-3 inhibitors alone. More importantly, for ESCC expressing both LAG-3 and CTLA-4, combined immunotherapy targeting LAG-3 and CTLA-4 could be more effective, especially for those infiltrated with abundant CD8+ T cells. This is because the cytotoxicity of pre-existing T cells would be turned off by LAG-3 and CTLA-4 engagement. Taken together, for current immunotherapy, the expression levels of multiple immune checkpoints should be monitored. A combination of LAG-3 inhibitors and CTLA-4 inhibitors may be an effective method for patients with ESCC. Additionally, the combination of LAG-3 and PD-1/PD-L1 may be a future direction of more attempts.

There are some limitations to our study. First, because of the retrospective nature of this study, selection bias and performance bias were inevitable. Second, the number of patients enrolled in our study was limited, which potentially affected our subgroup analyses, as patients with esophageal adenocarcinoma were not included in our study. Further prospective multicenter studies are warranted to address these limitations.

We want to thank Dr. Feng Li for his substantial aid in the review of the paraffin sections.

Funding: This work was supported by the Suzhou Key Discipline for Medicine (SZXK201803), the Suzhou Key Laboratory of Thoracic Oncology (SZS201907), the Municipal Program of People’s Livelihood Science and Technology in Suzhou (SS2019061), and the Municipal Program of Science and Technology in Suzhou (SYS201725).

Conflicts of Interest: The authors have no conﬂicts of interest to declare.

Ethical Statement: The authors are accountable for all aspects of the work in ensuring that questions related to the accuracy or integrity of any part of the work are appropriately investigated and resolved. This study was approved by the Institutional Review Board of the Second Affiliated Hospital of Soochow University.