Studies have shown that in many countries, intrauterine insemination (IUI) can be recommended as the first-line treatment for infertile couples who are pursuing treatment for infertility. IUI provides an opportunity to increase the probability of conception, and is simple, fast, and low cost (1). Some studies recommend the use of OS for IUI (2). Other studies have shown that IUI should be performed without OS (3). A randomized trial showed that after more than 4 IUI cycles, the pregnancy rate for young couples after superovulation was higher (33%) than that for unstimulated couples (18%) (4). However, the clinical pregnancy rate in women aged 40 and above was merely 5% (5).

A recent retrospective study found that IUI with OS could produce an increase in the upper limit of the pregnancy rate of more than 35% for females and infertile patients with unexplained factors and ovulation disorders. Natural cycle (NC) IUI has its own advantages in improving patients’ pregnancy rates with cervical factor infertility, male factor infertility, endometriosis, and other female infertility (6). Huang et al. performed 14,519 IUI cycles in 8,583 couples. Compared with NC IUI (6.2%), live birth rates were significantly higher in IUI cycles stimulated with the use of clomiphene citrate (CC) (8.9%), letrozole (9.4%), and gonadotropins (9.5%). The multiple pregnancy rate associated with the NC was 0.7%, while those associated with the CC cycle, letrozole cycle, and gonadotropin cycle were 4.6%, 1.3%, and 4.2%, respectively (7).

Currently, there are many stimulatory drugs in use including CC, gonadotropin-releasing hormone (GnRH) agonists, letrozole, HMG, and combinations of these drugs (8). However, there is no consensus on the best ovarian stimulants. To explore the effectiveness and safety of different OS schemes during IUI treatment for infertile patients and to evaluate the effects of single and multiple follicle growth during IUI treatment, we analyzed the clinical pregnancy rate, live birth rate, and multiple pregnancy rate in natural versus IUI stimulation cycles.

We organized a retrospective study at Yijishan Hospital’s Reproductive Medicine Center, Wannan Medical College. All data in this article were retrieved and exported from our clinical database. The research was approved by the local ethics committee and meets ethical demands.

The patients treated with IUI in our study were divided into those treated with or without OS. From January 2014 to December 2018, 658 couples underwent IUI treatment. The inclusion criteria were as follows: (I) couples have normal sexual life without contraception for more than one year without pregnancy, and the wife’s hysterosalpingography or laparoscopy results show unilateral or bilateral fallopian tube patency; (II) the husband performed semen analysis with a semen concentration exceeding 5 million per ml or with the total number of sperm progressive motility greater than 3 million.

The exclusion criteria were as follows: (I) bilateral fallopian tube pathology; (II) ovulation failure after IUI by ultrasound; (III) a total sperm count after semen treatment of <5 million per mL or total number of sperm progressive motility less than 3 million.

Patients were treated with NC IUI during a regular menstrual cycle. OS was performed in patients with irregular menstruation, abnormal follicle development, or ovulation disorders. Two types of OS protocols (letrozole vs. letrozole + HMG) were applied in this study: for the letrozole protocol, letrozole (Hengrui, Jiangsu Province, China) was administered continuously on the 3rd to 5th day after progesterone-induced menstruation or NC menstruation. The dosage was 2.5–5.0 mg/day for 5 days. For the letrozole plus HMG protocol, the dosage of letrozole was 2.5–5.0 mg per day, and letrozole was administered orally for 5 days. From day 3 to day 5, 75 IU HMG (Livzon, Zhuhai, China) was administered. Depending on the ovarian response, HMG was used at different times.

We used transvaginal sonography (TVS) to monitor follicular growth on the 8th to the 10th day of the patient’s cycle. Next, we monitored the follicles every 2 days according to the follicle numbers and sizes. When TVS indicated that there were follicles larger than or equal to 18 mm, we induced oocyte excretion by injection of 5,000–10,000 IU human chorionic gonadotropin (hCG) (Livzon, Zhuhai, China). If more than three dominant follicles were present, the couple was advised to cancel the cycle.

Artificial fertilization was scheduled from 36 to 40 hours after hCG injection. After abstinence from sexual activity for 3–7 days, semen was collected in the laboratory, and then washed with density gradient centrifugation and evaluated for count and motility of spermatozoa. The patient was fertilized in the artificial insemination room with a fertilization dose of 0.5 mL. After the operation, the patient lay supine for 30 minutes.

Beginning on the 2nd after insemination, progesterone support comprised 20 mg/d dydrogesterone (Duphaston, Abbott Biologicals, USA) in all patients. Serum hCG levels were measured on the 14th day after insemination to evaluate the occurrence of pregnancy. Ultrasonography was used 16–19 days after artificial fertilization to confirm pregnancy.

Ultrasonographic findings of an intrauterine pregnancy sac can be was considered clinical pregnancy. Ultrasound examination revealing 2 or more gestational sacs in the uterus indicated multiple pregnancies. Live birth is defined as a fetus born more than 28 weeks pregnant and has signs of normal life after birth.

From January 2014 to December 2018, data from 658 couples participating in this research were collected. Among the cycles studied, there were 150 NCs, 207 letrozole stimulation cycles, and 648 letrozole + HMG cycles. The patients’ basic characteristics are displayed in Table 1. The duration of infertility, infertility type, etiology, serum level of estradiol (E2), and PRL were not significantly different between the three groups (P>0.05). The female age, body mass index (BMI), serum level of follicle-stimulating hormone (FSH), serum level of luteinizing hormone (LH), and antral follicle count (AFC) were significantly different between the groups (P<0.05). 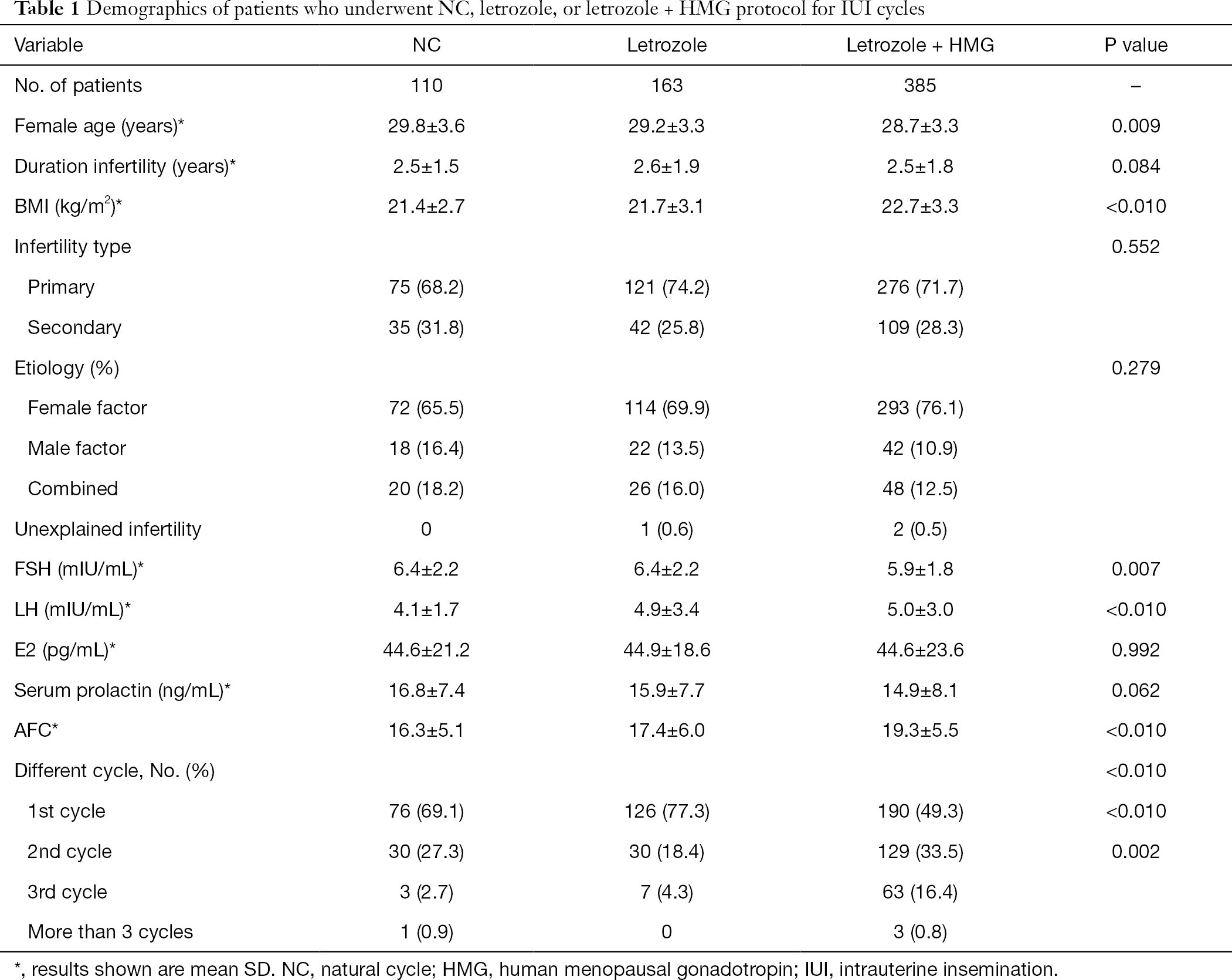 In the IUI protocols, OS include CC, letrozole, HMG, urinary FSH (uFSH) or recombinant FSH (rFSH), and GnRH agonists (9-13). Letrozole is used only for OS or in combination with injectable gonadotropin as an adjuvant (14-16). One of the main advantages of letrozole alone is its ability to restore single follicular ovulation in anovulatory infertility, for example, in polycystic ovary syndrome (PCOS) (17). Franik et al. (9) concluded that compared to CC, letrozole could enhance the pregnancy rate and live birth rate of subfertile patients with anovulatory PCOS. OS with letrozole may increase the live birth rate compared with NC IUI without increasing the multiple pregnancy rate in an IUI protocol for unexplained or mild male-factor infertility (7). In ovulating women, letrozole combined with HMG can significantly improve the live birth rate (2). Letrozole can act through different mechanisms in the central and external periphery. Aromatase inhibition improves gonadotropin secretion by decreasing estrogen output from the pituitary and hypothalamus to postmenopausal levels and by transmitting estrogen-associated negative feedback. The peripheral effects of letrozole involve the resulting accumulation of androgens in ovarian follicles when letrozole prevents androgens from converting into estrogens. The accumulation of androgens to a certain extent can promote the expression of the FSH receptor, thereby improving the sensitivity of growth follicles to FSH (9), which may account for the benefits of the combination of HMG and letrozole in OS.

Ovarian-stimulating drugs can stimulate the growth and simultaneous development of multiple follicles in the ovary and endometrium proliferation. A successful pregnancy is affected by implantation, which is a complex process that requires an interaction between the blastocyst and endometrium. Studies have shown that letrozole can activate the Wnt/β-catenin pathway, with more endometrial growth in patients with OS using letrozole compared with patients who use CC to stimulate the ovary (18). Letrozole has a good response to the endometrium of PCOS patients throughout the proliferative phase, which is associated with CC (19). The above studies show that letrozole can better increase the thickness of intima compared with CC, which may be the reason for increasing the clinical pregnancy rate.

Funding: This project was supported by the Science Foundation of Wannan Medical College for Young Scholars (Grant No. WK2017F28).

Ethical Statement: The authors are accountable for all aspects of the work, and the questions related to the accuracy or integrity of any part of the work are appropriately investigated and resolved. The research was approved by the local ethics committee and meets ethical demands.