A growing number of insulin-refusing type 2 diabetes patients increases the risk of a significant number of patients not achieving glucose control, facing diabetes-related complications, and impaired quality of life (5). Recent studies report insulin therapy refusal rate among insulin-naïve patients with type 2 diabetes in the range of 20–70% (6-12), with Asian populations more likely to refuse insulin than non-Asian populations (13). In fact, insulin refusal rate was reported as 70.6% in Singapore (6) and 42.5% in Bangladesh (8), compared to 33.0% in the United States (8). Moreover, insulin refusal rates are higher among low-income and racial minority populations, regardless of country of origin or residence (11).

Attitudes and beliefs of patients from Korea regarding insulin therapy may differ from those of patients from other cultures or countries. Specifically, diabetes management, including adherence to insulin therapy, is not always seen as high priority among the Korean population, with family obligations or financial comforts often making top of the list (14-16). This suggests that the differences in insulin refusal rates may result from cultural norms and the healthcare systems available in a particular country; individual health-related beliefs and psychosocial factors also play a role (17,18). To-date, only one study reported on insulin refusal among the Korean population, which, over a decade ago, was estimated at 67% (10). Nevertheless, this study had several limitations. First, the sample size was relatively small (N=76). Second, PIR was assessed with an invalid instrument. In addition, it should be noted that healthcare policy on chronic disease management in Korea has changed significantly over the past 10 years; as such, attitudes and beliefs toward insulin, and thus the insulin refusal rate, are likely to have changed. Since the publication of the first study of insulin refusal among Koreans, the data regarding PIR in this population has not been updated and the impact of the psychosocial burden of diabetes on insulin therapy uptake remains incompletely understood. To fill this gap, this study examined the insulin refusal rate and PIR level among Korean patients with type 2 diabetes.

Patients with type 2 diabetes, registered at the endocrinology departments of two university hospitals and two public healthcare centers in an urban area of Korea, participated in this study; data were collected between January and December in 2016. Required sample size to compare the PIR level among groups was calculated based on the prior study (10) using G*Power 3.1 (www.gpower.hhu.de), applying an effect size of 0.25 (medium), power (1-β) 0.80, and an α of 0.05 for one way ANOVA analysis. The required sample size was 73, a total of 515 patients were satisfied this requirement in this study. However, we tried to include as many eligible participants as possible to investigate the insulin refusal rates. Individuals were eligible for inclusion in the study if they were diagnosed with type 2 diabetes, recommended insulin therapy, and ≥19-year-old. Participants were excluded from the study if they were diagnosed with a psychological disorder or cognitive impairment, such as dementia, if they were hospitalized during the study period, or diagnosed with type 1 or gestational diabetes.

Patients provided written informed consent during their scheduled follow-up appointments after receiving an explanation of the purpose and procedure of the study (including the voluntary nature of the study, the right to withdraw, and confidentiality). Trained research staff administered the questionnaire during a face-to-face interview at a private outpatient office. After completing the questionnaire, prescriptions were checked to confirm the treatment type (i.e., oral agents, injections) recommended to each patient.

Only the G2 group patients were asked about their intention to receive insulin therapy. The following question was used: “Do you intend to take insulin, as recommended?” This was a multiple-choice question with available answers as follows: “Not necessary (recognized as insulin denial),” “Would like to delay insulin therapy as long as I can,” and “Will receive within 3 months.”

PIR was measured using the Korean version of the Psychological Insulin Resistance scale (K-PIR), which was developed and validated by Song et al. (3). The K-PIR consists of two subscales that include psycho-cognitive (negative feelings, low awareness, low confidence in being able to self-inject, dependent lifestyle, and embarrassment) and supportive (economic burden and feeling about family/friends) factors. The 18 items included in the scale were evaluated using a five-point Likert scale to yield a total score of 18–90, with higher scores indicating a higher level of PIR. In a study conducted by Song et al., Cronbach’s alpha was 0.90 for the psycho-cognitive factors and 0.74 for supportive factors (3); in this study, Cronbach’s alpha was 0.90 and 0.76, respectively.

The insulin refusal rate was calculated based on the number of participants who did not take insulin therapy (G1) over the total number of patients who were recommended insulin therapy (G2). Independent t-test and chi-square tests were performed to compare the distribution of patient demographic characteristics between G1 (insulin acceptance) and G2 (insulin refusal) groups. The degree of PIR in the insulin refusal group was examined using ANOVA and a post-hoc Scheffe test. P values <0.05 were considered statistically significant.

Table 1 presents the prevalence of insulin refusal. The insulin refusal rate was 35.7% (the percentage of insulin-refusal patients (G2, n=184) among all patients recommended to undergo insulin therapy by their health care providers (G1 + G2, n=515). 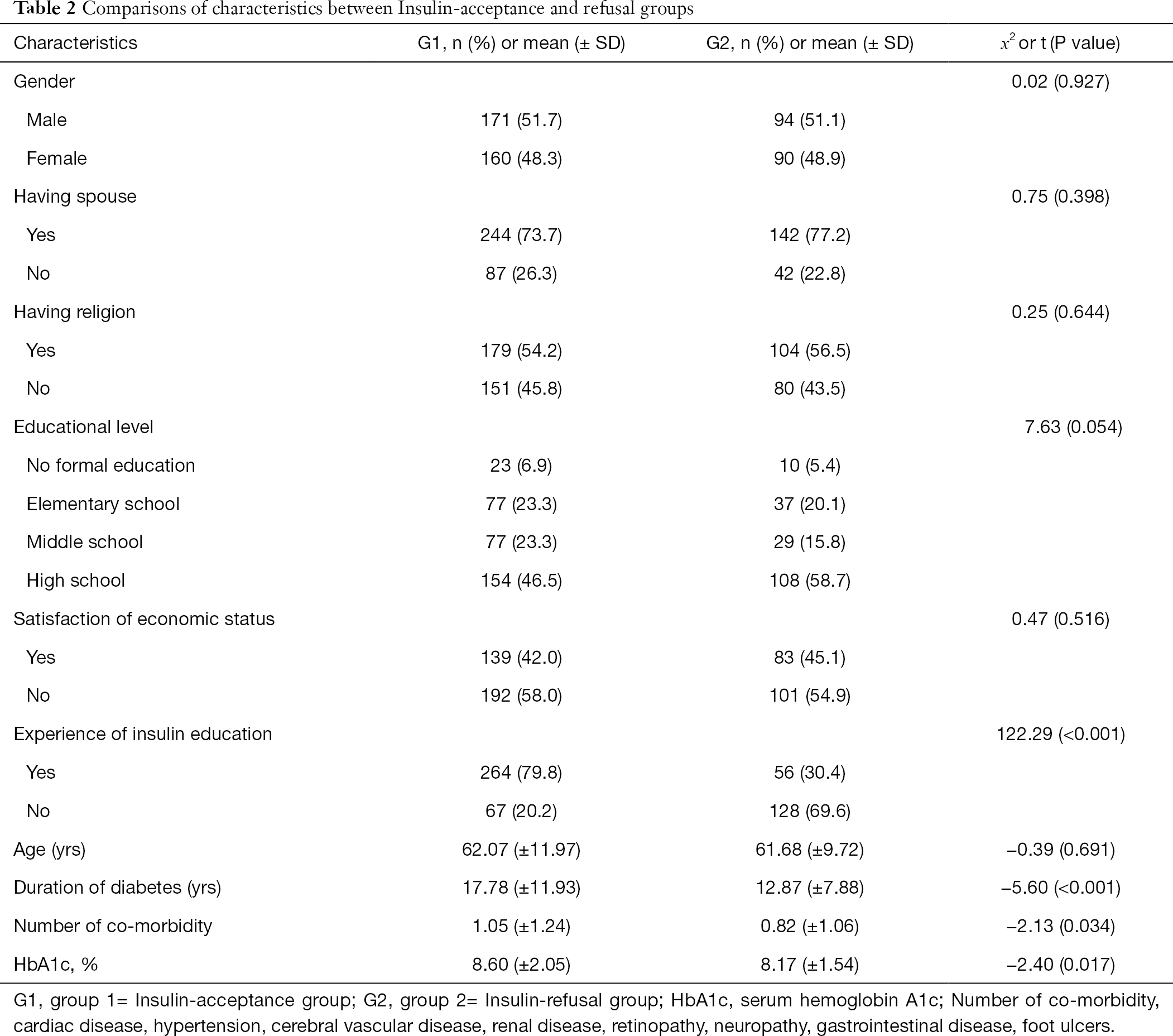 Intention to receive insulin therapy among the insulin refusal group

The total mean PIR score was significantly lower for patients willing to receive insulin therapy within 3 months (F=26.83, P<0.001) than for individuals in the “insulin unnecessary (insulin denial)” and “want to delay” groups. The mean scores for the psycho-cognitive (F=31.91, P<0.001) and supportive (F=4.80, P=0.009) factors were highest for patients in the insulin refusal group who answered, “Not necessary (insulin denial).”

Over the last decade, in Korea, the prevalence of diabetes has rapidly increased to 12.4% in 2011, compared to 9.1% in 2005; a further 2-fold increase is expected over the next 40 years (16). Despite the growing prevalence of diabetes, insulin refusal rate has declined from 67% in 2008 (10) to 35.7% in the current study. This decrease coincides with efforts to reduce the prevalence of diabetes in Korea that have been taking place since 2008. Health policies have emphasized the importance of following diabetes treatment guidelines and have encouraged clinicians to identify patients needing insulin therapy. For example, patients with type 2 diabetes requiring insulin may now receive insulin therapy education from advanced medical institutes, with support from Korea’s national health insurance. Moreover, since 2011, several regional public healthcare centers have implemented diabetes registration and control programs for older adults, with support from the Korea Centers for Disease Control & Prevention (19), and the recommendation of insulin pen uses by physicians. These activities may have influenced the prevalence of insulin refusal.

Although the rate of insulin acceptance has increased, the PIR levels among insulin-refusal patients remain similar to those observed in a previous study (10). This demonstrates that the perceived psychological barriers to insulin therapy initiation and adherence among insulin-refusing patients have not changed, despite implementation of a diabetes control program in Korea in 2011. In the Diabetes Attitudes, Wishes, and Needs (DAWN) study, conducted in 13 countries, the 5As (assess-advise-agree-assist-arrange) program was developed to identify the precise barriers and sources of concern for individuals with PIR (20). The 5As program recommended specific approaches to address insulin use barriers (20), but most of the recommended strategies involved explaining the reasons for prescribing insulin and teaching the patient how to simplify insulin administration. Some studies reported that PIR can be influenced by culture, age, sex, and socioeconomic status (11), as well as linked with individual psychological states, such as depression and distress (21). As such, educational approaches focused on the medical aspect of insulin therapy alone may be limited in their ability to reduce PIR among some insulin-naïve patients. Luk stated that ‘healthcare providers should be alerted to the multi-dimensional nature of PIR’ (21). Nevertheless, the need remains for further comprehensive research to better understand the factors related to PIR and how to address them with patients.

Some limitations were present in this study. First, the patients involved in this study were from two cities in Korea, which might limit the generalizability of the findings. Future research should include larger samples across multiple research sites. Second, reluctance toward insulin was investigated through a self-report and confirmed with a medical record check, which is associated with a risk of patients concealing their real attitudes toward insulin and some records might have been omitted. As a result, insulin refusal rate reported in this might be subject to bias. Third, the PIR measurement tool used in this study, the K-PIR tool, may also present a limitation. Although the K-PIR was developed from existing instruments, including the Barriers to Insulin Treatment questionnaire and the Problem Areas in Diabetes survey, the simple comparison of PIR levels between other ethnic groups and Koreans may be a limitation. Further studies are needed to analyze the differences in PIR levels between Asian and non-Asian populations, using the same tool. As an example, the DAWN study used specific tools to compare various psychosocial outcomes, such as quality of life and diabetes treatment burden, in 17 countries (18). Moreover, reasons for PIR in patients should be investigated using in-depth interviews for better understanding of the motivations driving each patient’s decision-making.

Despite these potential limitations, this study was, to the best of our knowledge, it attempts to explore various aspects of insulin refusal and PIR in Korean patients with type 2 diabetes. Several important clinical implications for the care of Koreans with type 2 diabetes can be addressed. As previously emphasized in the literature, PIR should be continuously monitored among all patients with diabetes, and appropriate interventions should be applied. Healthcare providers should understand that psychological resistance to insulin therapy is a continuous process experienced by patients with diabetes. Furthermore, healthcare providers should respect patients’ decisions, while also planning individualized education and counseling regarding insulin use and other self-management techniques implemented in healthcare settings. This study found that the prevalence of insulin resistance has decreased in Korea over the past decade, but the PIR level in the insulin-naïve group has remained unchanged. As national policies and support may affect insulin refusal rates, economic support and the national insurance system should be further developed to reduce resistance to insulin therapy among Korea patients with type 2 diabetes.

Funding: This work was supported by the National Research Foundation of Korea (NRF) grant funded by the Korea government (Ministry of Science and ICT, MSIT) (NRF-2019R1A2C1006016).

Ethical Statement: The authors are accountable for all aspects of the work in ensuring that questions related to the accuracy or integrity of any part of the work are appropriately investigated and resolved. The study protocol was approved by the appropriate institutional review boards (No. 2-1046881-A-N-01-201410-HR-046 and CNUH 2015-09-005).