Although the incidence of nasopharyngeal carcinoma (NPC) accounted for approximately 0.7% of all new cancer cases diagnosed in 2018, a very unique pattern of geographic and ethnic distribution was observed (1). This cancer has the highest prevalence in the south of China (30 cases per 100,000 population) but the annual incidence of this cancer in Europe and the United States (US) is rare (less than 1 case per 100,000 population (1). In 2005, the World Health Organization (WHO) classified NPC into the following two histologic subtypes based on microscopic morphology: keratinizing squamous cell carcinoma (KSCC, WHO type I), and non-keratinizing carcinoma (NKC) (2). NKC subtype was further classed as being ‘differentiated’ (DNKC) and ‘undifferentiated’ (UNKC) (2). There are environmental, genetic, and ethnic factors linked to the development of the aforementioned histological categories (3-5). KSCC is the predominant histological type observed in Caucasians, whereas only 0.4–1% of these is identified in Chinese populations (6-11).

There have been limited studies comparing the survival of different histological subtypes from NPC endemic areas due to the low incidence of KSCC and DNKC in endemic areas (10,12,13). Several studies from non-endemic areas found that the outcome of KSCC was significantly poorer than for NKC (14,15) but further analysis of outcomes for DNKC and UNKC have not been performed. However, previous studies have found that those patients with a DNKC subtype had poor survival compared to those with UNKC subtype (16,17). For the KSCC subtype, the disease failure pattern was mainly local recurrence, while distant metastasis was the most common reason for disease failure in those with NKC subtype (18,19). A study from NPC endemic areas previously indicated that 2 years was the peak follow-up time for disease failure associated with NPC and most patients were the NKC subtype (20). However, to the best of our knowledge, no consensus exists regarding the follow-up of NPC patients stratified by different histological subtypes. Early diagnosis of disease recurrence could result in aggressive disease management with curative intent and improved outcome in selected patients. Therefore, the aims of this study were to determine the hazard function of disease-related death and determine the prognostic effect of early and late disease-related death in NPC according to histological subtypes. This may provide a tailored follow-up strategy for different histological subtypes using real-world data.

We employed retrospective data from the Surveillance, Epidemiology and End-Results (SEER) program in this study (21). The SEER program includes incidence, demographic, clinicopathological, treatment and outcome data for cancer in approximately 28% of the US population. Patients diagnosed with KSCC (ICD-O-3 codes 8070 and 8071), DNKC (ICD-O-3 codes 8072 and 8073), and UNKC (ICD-O-3 codes 8020, 8021, 8082, and 8083) types of NPC were identified based on the third edition of the International Classification of Diseases for Oncology (ICD-O-3). In addition, patients who received beam radiotherapy, available tumor (T) stage, nodal (N) stage were included, while race/ethnicity were also recorded. Patients with metastatic disease and no pathological diagnosis were excluded. The Institutional Review Board approval of this study was not required because the SEER database is a globally accessible database to the public.

The following variables were identified from the SEER database in this study: age, gender, histological subtypes, T stage, N stage, race/ethnicity, and chemotherapy. The definition of the staging system was based on the sixth edition of Union for International Cancer Control/American Joint Committee on Cancer TNM classification system. The primary clinical end-point of the study was NPC-specific survival (NPC-SS).

Patient characteristics were compared using the Chi-squared test. The life-table method was used to calculate the annual NPC-related death hazard rate over time i.e., the conditional probability of manifesting NPC related-death in a year given that the patient was clinically free from NPC related-death at the beginning of the year. Kaplan-Meier curves for NPC-SS were plotted and compared using the log-rank test. Univariate and multivariate Cox regression analyses were performed to investigate the independent prognostic indicators associated with NPC-SS, and the results were presented as hazard ratios (HRs) and 95% confidence intervals (CIs). All statistical analyses were conducted in SPSS, version 22.0 (IBM Corporation, Armonk, NY, USA) and STATA version 14.0 (StataCorp., Texas, USA), and P values less than 0.05 were considered statistically significant. 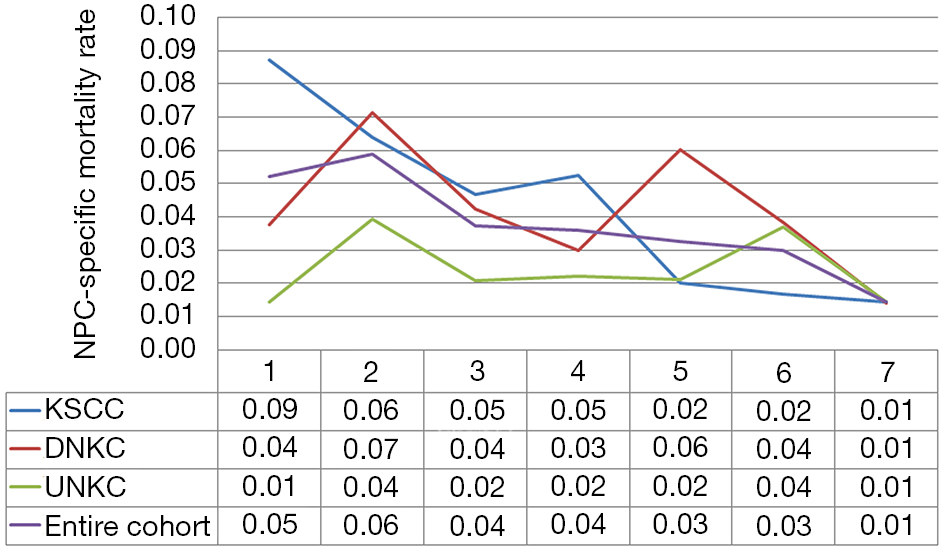 The effect of histological subtypes on outcome with extensive follow-up 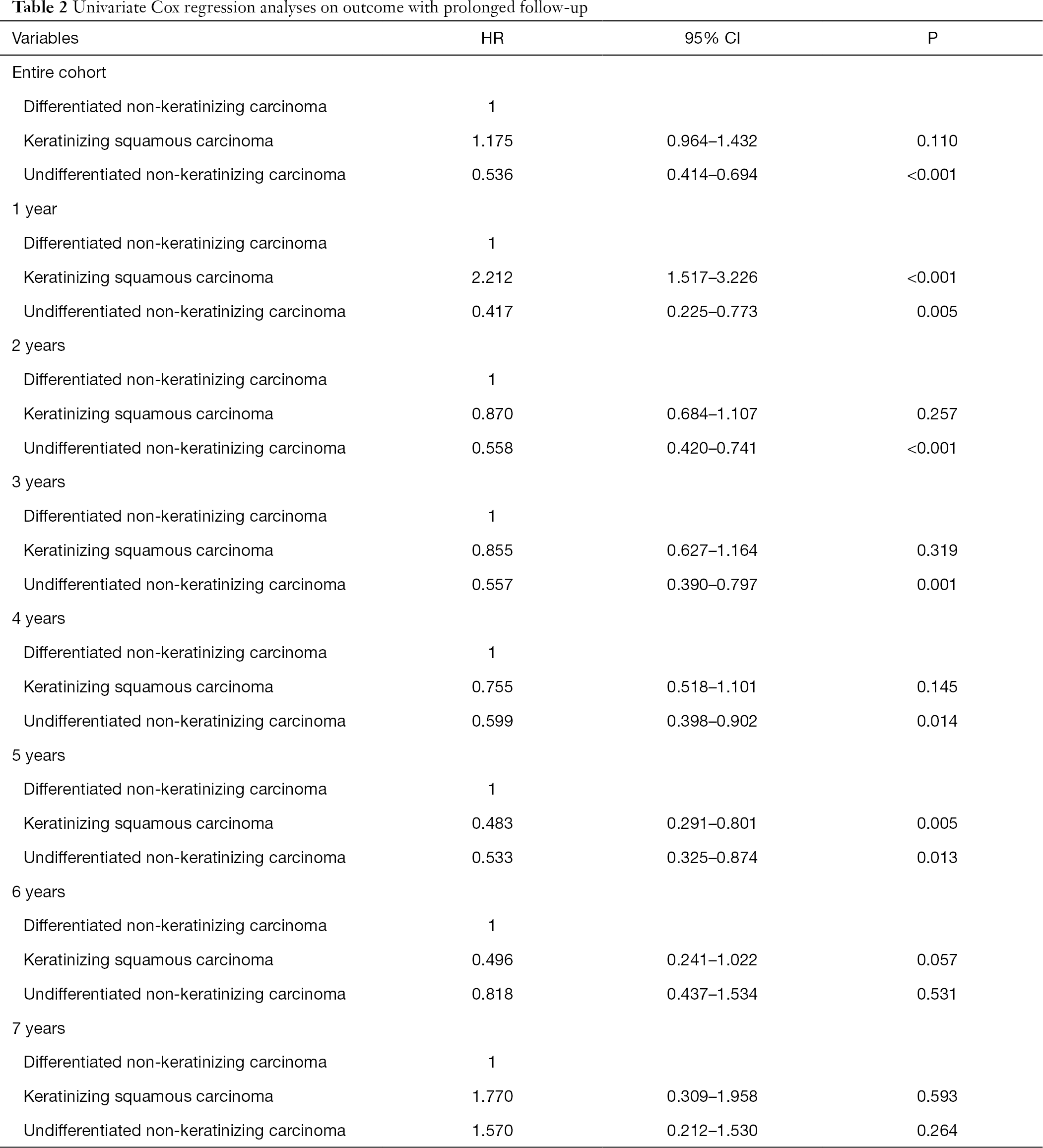 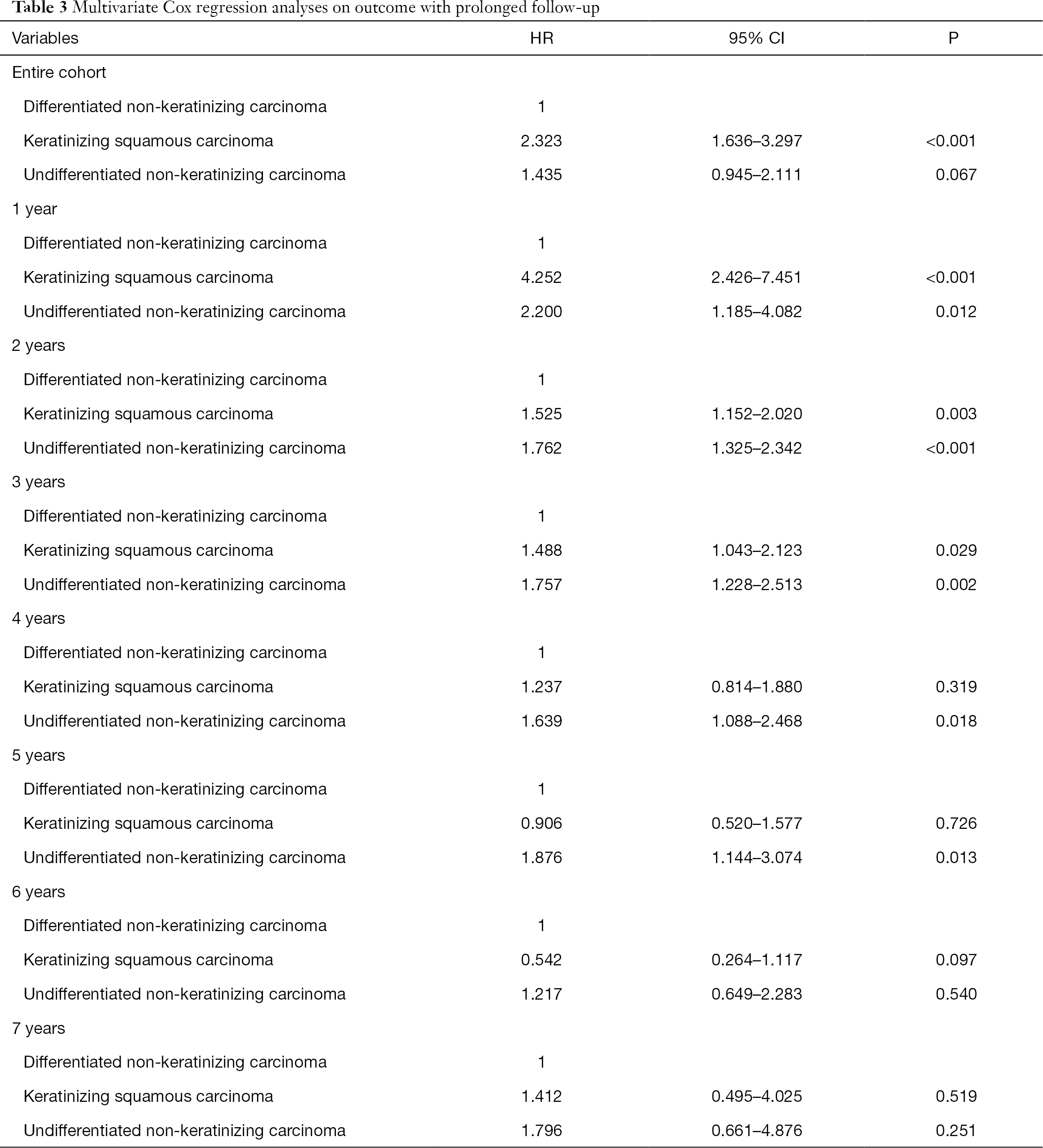 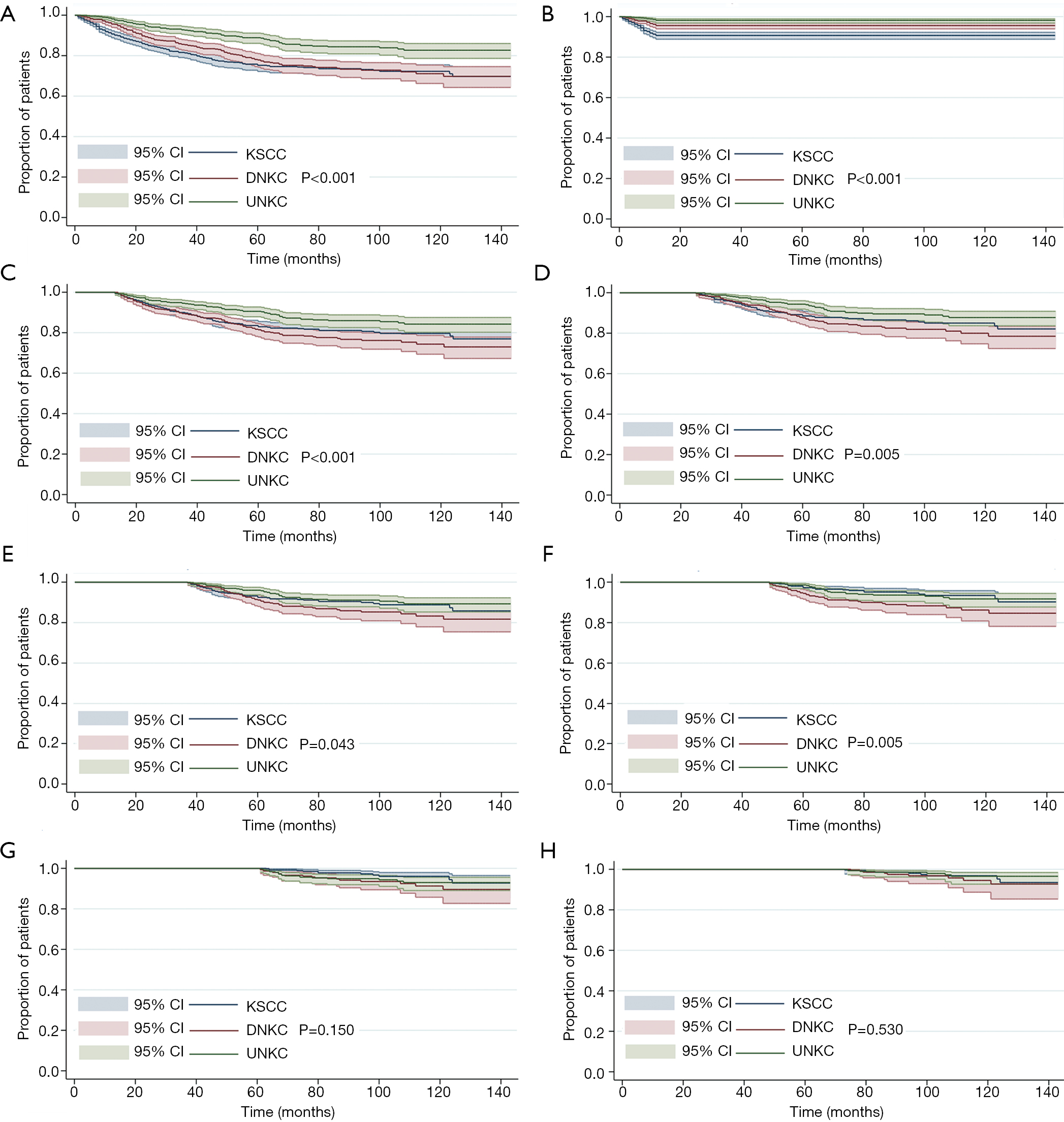 The understanding of the changes in the risk of NPC-related death could help radiation oncologists to tailor more individualized surveillance and follow-up strategies of NPC patients. For the entire cohort, our study showed that the hazard curve for NPC-related death peaked at 2 years, and then declined gradually between 3 and 6 years. The study from Sun Yat-sen University Cancer Center included 749 patients with NPC (99.3% with NKC, and 0.7% with KSCC) also indicated that the hazard curve for treatment failure peaked at 2 years, and between 3 and 5 years it slowly declined and then dropped sharply (20). This was similar to our findings. However, the aforementioned results did not distinguish by outcome between DNKC and UNKC (20). In our study, we included NPC patients from non-epidemic areas where KSCC is the predominant histology type. Previous studies have shown differences in the risk of disease failure between DNKC and UNKC (16,17). To the best of our knowledge, no consensus exists regarding the follow-up of NPC patients in assessing the risk of NPC-related deaths over time by different histological subtypes. Our subgroup analysis indicated that the risk of NPC-related death for those with a KSCC subtype was 9% within 1 year and 2.0% during the first 5 years of follow-up. In addition, both DNKC and UNKC had two peaks for NPC-related death.

For patients with KSCC, the predominant pattern of disease failure was local recurrence, while for NKC, distant recurrence was the predominant pattern (18,19). Therefore, the higher risk of mortality associated with KSCC may contribute to uncontrolled locoregional tumors in the first year of diagnosis. Although the majority of NPC-related deaths occurred within 2 years of diagnosis, the findings from our study indicate that the hazard rate was 6.0% in DNKC patients who developed a late NPC-related death during the 5 years of follow-up, while UNKC patients developed a late NPC-related death during the 6 years of follow-up. The tumor dormancy hypothesis includes immunosurveillance, angiogenic dormancy, and cellular dormancy (G0-G1 arrest), and these may be the mechanisms that explain this phenomenon (22). Several compelling preclinical studies have indicated that angiogenesis switch may be a key trigger in reversing tumor dormancy, which could cause tumor local recurrence and distant metastasis (23,24). These findings suggest that a deeper understanding of the underlying tumor biology that drives dormancy in NPC patients is needed in order to better elucidate by different histological subtypes.

The different response mechanisms to the same treatment may also be one of the biological mechanisms responsible for different risks in NPC-related death by histological subtypes. In a study of patients from a NPC epidemic area, the expression of drug resistance-related protein-excision repair cross complementation group 1 (ERCC1) was significantly higher in the DNKC subtype compared with the UNKC subtype. Patients with ERCC1 overexpression had a significantly higher risk of locoregional and distant failure than patients with low ERCC1 expression (16). However, no patients had KSCC in the aforementioned study. Previously, it has been reported that low ERCC1 expression was related to better survival benefit from cisplatin-based chemotherapy in non-small-cell lung cancer (25). In current clinical practice, cisplatin-based chemotherapy was also the main chemotherapy regimen for NPC. A similar observation of poor response to treatment and outcome with overexpression of ERCC1 in KSCC or DNKC subtypes compared to the UNKC subtype has been reported from patients in a non-endemic region (17). Therefore, patients with ERCC1 overexpression may have a lower response to radiotherapy. Given the different radiosensitivities of various histological subtypes, we believe that the relatively higher proportion of the KSCC and DNKC subtypes is the main reason for poorer survival in non-endemic areas (7).

The current follow-up guideline for NPC from the National Comprehensive Cancer Network recommends follow-up every 1–3, 2–6, and 4–8 months in years 1, 2, and 3–5, respectively (26). Our study queries whether it is reasonable to use the same intensive follow-up strategy in NPC patients with different histological subtypes. According to our results, strict follow-up should be performed in patients with KSCC diagnosed within 1-3 years compared with those who have UNKC, whereas patients with DNKC should strictly be followed up for at least 5 years. In patients with DNKC who are more likely to relapse, intensive monitoring the trend of changes in post treatment Epstein-Barr virus (EBV) DNA copies are critical. In addition, those who are at higher risk of relapse can be considered for investigational adjuvant treatment, for instance there is suggestion that tegafur may reduce risk of relapse (27,28). Moreover, the other area worth looking into in the future is 3 and 12 months post treatment positron emission tomography-computer tomography in high risk subgroups, especially for KSCC to predict early relapse.

There were several limitations to our study. First, we could not include the patient characteristics such as EBV status, smoking status, alcohol consumption, socioeconomic environment, performance status, or comorbidities due to the retrospective nature of our study. This might have importance for assessing outcome of NPC, especially for KSCC subtypes (29). Secondly, the SEER database also lacks details regarding chemotherapy regimen, radiotherapy technique, radiotherapy dose, completion rate of therapy, and sequence of chemotherapy and radiotherapy. Therefore, treatment strategies were somewhat heterogenous in our study. Moreover, we only analyzed NPC-SS in this study due to lack of patterns of locoregional and distant recurrence. Finally, our findings may not be representative of populations from NPC epidemic areas. However, we believe our study is the first study to assess the hazard rate of NPC-related mortality according to histological subtypes using real-world data.

In conclusion, our study suggests that the patterns of hazard rates for NPC-related mortality significantly differed among patients with different histological subtypes. Tailored surveillance and follow-up strategies should be devised for NPC patients according to their histological subtype.

The authors acknowledge the efforts of the Surveillance, Epidemiology, and End Results (SEER) Program tumor registries in the creation of the SEER database.

Ethical Statement: The authors are accountable for all aspects of the work in ensuring that questions related to the accuracy or integrity of any part of the work are appropriately investigated and resolved. The approval process of Institutional Review Board was waived because of the de-identified information of the patients included in the SEER.