Orthostatic proteinuria (OP), which is also called as postural proteinuria, is characterized by the presence of protein in the urine collected in the upright position and the absence in the urine collected in the supine position. Usually, the urine protein/creatinine is <0.2 mg/kg, and the 24 h-proteinuria is <1 g. It was first described by Pavy in 1885, while Striling found that it was related to the posture in 1887. OP is the most common in children and adolescent with proteinuria (75%), and 90% of them with asymptomatic proteinuria (1). It affects about 2.5–5% of children or young adults with asymptomatic proteinuria (1), but recent studies report the incidence of OP is higher than 15% in children between 6 and 18 years of age (2,3). OP belongs to functional proteinuria, but is different from the transient proteinuria, which is caused by infection, dehydration or sports. The pathogenesis of OP is unknown although its prognosis is good. A few studies have revealed patients with OP have evident kidney injury which may even progress into the end-stage renal failure (4). Thus, it is very important to distinguish OP from the serious kidney diseases, especially the early stage and latent kidney diseases. Several tests have been developed for the diagnosis of OP, such as West test, upright lordotic position test and Robinson test, but there is no golden standard for its diagnosis. Moreover, some children have difficulty in receiving the complicated tests. These make the diagnosis of OP challenging. The present study aimed to investigate the clinical value of micro-proteinuria in combination of ultrasonography of the left renal vein (LRV) in the diagnosis of OP.

The study was approved by the Ethics Committee of Shanghai Children’s Hospital (2019R052-E01). All authors are accountable for all aspects of the work including full data access, integrity of the data and the accuracy of the data analysis.

All patients with suspected OP in clinic and enrolled to be in hospital were recruited between January 2013 and January 2018. All cases were screened by electronic medical records. They received West test, upright lordotic position test, Robinson test, and detections of urine microscopy, micro-proteinuria in the morning and after activity, 24 h-proteinuria, serum albumin and creatinine as well as ultrasonography of the LRV. Micro-proteinuria including urine IgG/Cr, Alb/Cr, NAG/Cr, α1Mu/Cr were tested by immunoturbidimetry. The diagnostic criteria for OP were as follows: (I) no proteinuria in the morning; (II) exclusion of hematuria, and primary or secondary kidney diseases such as nephrotic syndrome, lupus nephritis, infectious nephritis, etc., according to clinical manifestations and laboratory examinations (liver and kidney function, Alb, ASO, hepatitis, autoantibody, complements, etc.); (III) positive results in all the three tests (West test, upright lordotic position test and Robinson test); (IV) 24 h-proteinuria <1 g; (V) no disease progression with normal morning urinary micro-proteinuria test. Patients who were not diagnosed with OP were included in the non-OP group.

The urine samples were collected in the upright position and supine position, on the next morning and after activity for 2–3 h. Positive West test is defined as the morning urine protein test showing negative, but positive after 2–3 h activity, which supports the diagnosis of OP (5).

The subject stands by the wall after urination with the upright lordotic posture, the heels were 15 cm away from to the wall and the head was close to the wall, or a bar/pillow was placed behind the lumbar spine for 15 min. The urine sample was collected after 2-h supine position and then at 1 h after the lordotic position. If proteinuria test shows negative in the supine position, but ++ or higher in the upright position, the test supports the diagnosis of OP (6).

Ultrasonography of the LRV

Philip Iu22D with 5-1 MHz (Philips Ultrasound, Bothell, WA, USA) was used to do ultrasonography. We did ultrasonography in both supine and upright for each patient. Anteroposterior (AP) diameter and peak velocity (PV) were measured three times at 2 points in the LRV, one at the lateral portion of the LRV near the hilum and the other where the LRV courses between the aorta and the superior mesenteric artery (aortomesenteric portion). The ratio of AP in the hilar and narrow portions (a/b) was calculated. If a/b is larger than 4 when the subject is in a recumbent position or in upright lordotic posture for more than 20 min (8).

Data are presented as mean ± standard deviation (SD). Comparisons between groups were carried out using the Wilcoxon matched-pairs signed rank test. The correlation between different parameters was studied using the Spearman’s correlation analysis. A value of P<0.05 was considered statistically significant. Statistical analysis was performed with SPSS version 19.0 (SPSS Inc., Chicago, IL, USA). We got area under the curve (AUC) from receiver operating characteristic (ROC) which made by SPSS 19.0 and the best value was the point that Youden’s index (YI) was the biggest.

The morning urine micro-proteinuria test showed normal in the non-OP group, but it slightly increased after activity. The urine Alb/Cr and IgG/Cr were significantly different between two groups (Z=–3.29 and –3.35, P<0.05), while NAG/Cr and α1Mu/Cr were comparable between them (Z=–0.31 and –0.34, P>0.05) (Table 1). Ten of subjects without OP had LRV entrapment on ultrasonography.

These findings suggest that the LRV entrapment and the micro-proteinuria after activity affect the OP. Thus, the contribution of both to the OP was further investigated. Results showed the AUC for elevated Alb/Cr, IgG/Cr, NAG/Cr and α1Mu/Cr after activity in the diagnosis of OP was 0.84, 0.84, 0.76 and 0.56, respectively, and the best cut-off value was 13.2 mg/mmol, 2.52 mg/mmol, 0.64 U/mmol, and 0.51 mg/mmol. The AUC and the best cut-off value for LRV (a/b) were 0.58 and 4.06, respectively. The increased micro-proteinuria after activity and the LRV entrapment on ultrasonography have a good performance in the diagnosis of OP, especially Alb/Cr and IgG/Cr (Figure 2).

Figure 1 Patients suspected with OP in clinic and enrolled into hospital were excluded by hematuria and other kidney diseases, failure to complete any one of three clinical tests for OP and insufficient clinical data. OP, orthostatic proteinuria. 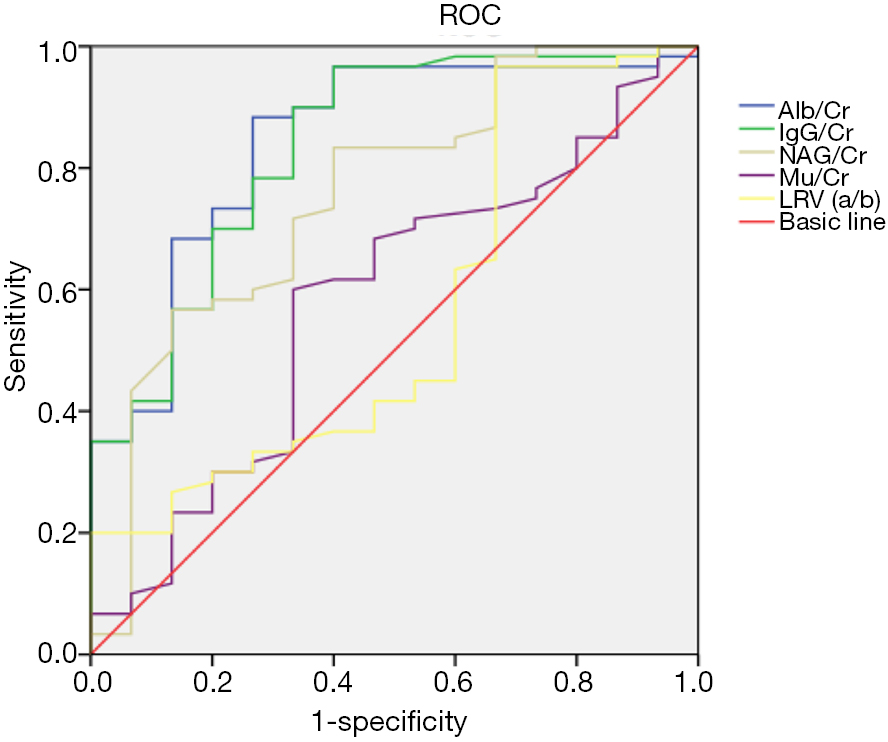 The pathogenesis of OP is unclear. Three potential mechanisms have been proposed: (I) obstructive factor. Since the proteinuria increases upon standing, some physiological responses may result OP, such as LRV is compressed between the aorta and the superior mesenteric artery (11). (II) Hemodynamic factor. The hemodynamic abnormality may result in OP. Increased renin and angiotensin II upon standing may increase proteinuria (3,12). (III) Immunological factor. OP might be related to the minor renal damage and the immune-complex deposition in the kidney, the latter two of which also have a close relationship (13). Nathan (14) and Shintaku et al. (15) for the first time connected the OP to the LRV entrapment. LRV entrapment was reported as the main cause of OP (16). Some investigators also found the LRV entrapment/Nutcracker syndrome could cause OP (11,17). Proteinuria increased in mice with LRV entrapment, which was also accompanied by the decreased glomerular filtration rate, increased glomerular capillary pressure and compression of the arteriolar glomerularis efferens, while proteinuria was lowered after ARB treatment (18). Shintaku et al. found that 9 children had LRV entrapment in 80 healthy children, of whom three were diagnosed with OP (15). Devarajan (19) reported that OP was improved in a patient after donation of the kidney with RV entrapment, while the recipient had no proteinuria. Ultrasound may be an effective and non-invasive tool for identifying LRV entrapment in OP patients (20). Recently, some investigators employ CT for the detection of LRV entrapment (21). Ha and Lee reported a girl with 24 h-proteinuria >1.5 g but normal morning urine protein was diagnosed with moderate LRV entrapment on magnetic resonance angiography (MRA); the renal biopsy and pathological examination showed moderate mesangial hyperplasia but normal immunofluorescence and electron microscopic findings; remission was observed after ARB treatment (22). Some clinicians speculate that interventions are not necessary for OP because it will recover with the growth and development (23). In our study, there was significant difference in the number of patients with LRV entrapment between OP group and non-OP group. The AUC of LRV entrapment was 0.58 in the diagnosis of OP. It implies that LRV entrapment is related to the OP.

Frey (24) found the ingredients of proteinuria changed from supine position to upright position in OP patients except for the increased proteinuria, but it did not change in nephritis patients. Hence, OP is a kind of selective proteinuria. Macro-molecular proteins such as IgG and C3 may appear in the proteinuria upon standing (25). Kanai et al. found the comparison of urinary fibrin/fibrinogen degradation products (uFDP) level in supine/upright urine could be reliable for the diagnosis and differentiation of OP and active GN (26). Our results showed Alb/Cr and IgG/Cr in the morning urine were higher than those in the urine collected after activity in the OP group. The macro-molecular proteinuria (Alb and IgG) increased more than the micro-molecular proteinuria (NAG) although NAG/Cr increased after activity. The urine Alb/Cr >13.2 mg/mmol, IgG/Cr >2.52 mg/mmol and NAG/Cr >0.64 U/mmol after activity are important for the diagnosis of OP.

Based on our findings, we recommend micro-proteinuria in combination with ultrasonography of the LRV for the screening of OP. OP should be considered in patients with asymptomatic proteinuria, especially in those with normal morning urine protein and proteinuria after activity (especially 24 h-proteinuria <1 g).

Funding: The present study was supported by the Major Innovation Project of Translational Medicine of the Medical School of Shanghai Jiao Tong University (No. 15ZH1007, 15ZH4008), the National Nature Science Foundation of China (No. 81500540), the Youth Projects of Shanghai Municipal Commission of Health and Family Planning (No: 20144Y0177, 20174Y0086), the Outstanding Youth Training Plan offered by Shanghai Children’s Hospital (award to Sheng Hao, 2013).