As an important connection between the forefoot and midfoot, tarsometatarsal (TMT) joints have various complicated functions in both standing and walking postures. According to the anatomic characteristics and functions, Myerson (1) divided the midfoot structures into three parts: the medial column, the middle column, and the lateral column (Figure 1). Injuries to the TMT joints account for 0.2% of all orthopedic injuries with 55,000 cases per year (2). Injuries to the 4th and 5th TMT joints are seen in various traumatic events. Current researches (3-5) focus on the management of the three medial TMT joints, while scarce literature has discussed the lateral TMT joints. 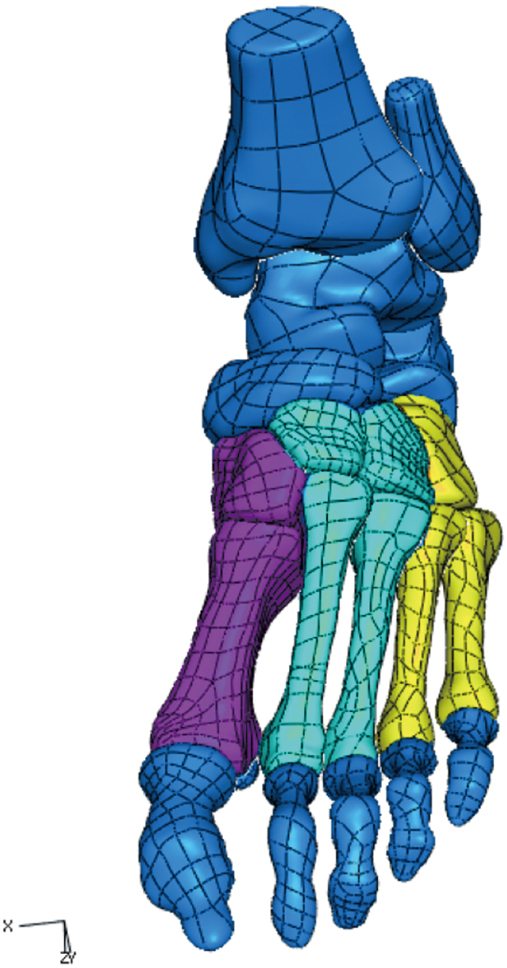 Injuries of the midfoot are usually caused by a direct or indirect force, which can be divided into four different types according to modified Myerson classification system (15) (Figure 2). The isolated 4th or 5th TMT joint injury especially long-term severe arthritis is rarely reported. Thus, the surgical treatments to such kinds of injuries are still controversial. At present, the surgical managements of the 4th and 5th TMT injuries can mainly be classified as open reduction and internal fixation, TMT arthrodesis, and arthroplasty (16-18). This study mainly discussed the 4th and 5th TMT arthrodesis. Most studies suggested motion-preserving procedures since they believed that arthrodesis of lateral column could increase the risk of post-operative nonunion, pain, foot stiffness, adjacent joints degeneration, and stress fractures (19,20). However, the arthrodesis of lateral TMT may be the only choice when structural deformity or severe pain occurred. Raikin et al. (21) reported 23 cases with severe deformity and pain, who undergone the arthrodesis of 4th and 5th TMT joints, and the results showed that the arthrodesis of 4th and 5th TMT joints produced good outcomes such as pain relief and functional improvement, but 13 cases still complained about subjective stiffness of the lateral foot. Although a few studies suggested that the arthrodesis of 4th and 5th TMT joints could obtain pain relief and functional improvement, these studies were all short-term to mid-term researches without a proper evaluation of the influence on the normal midfoot biomechanics. 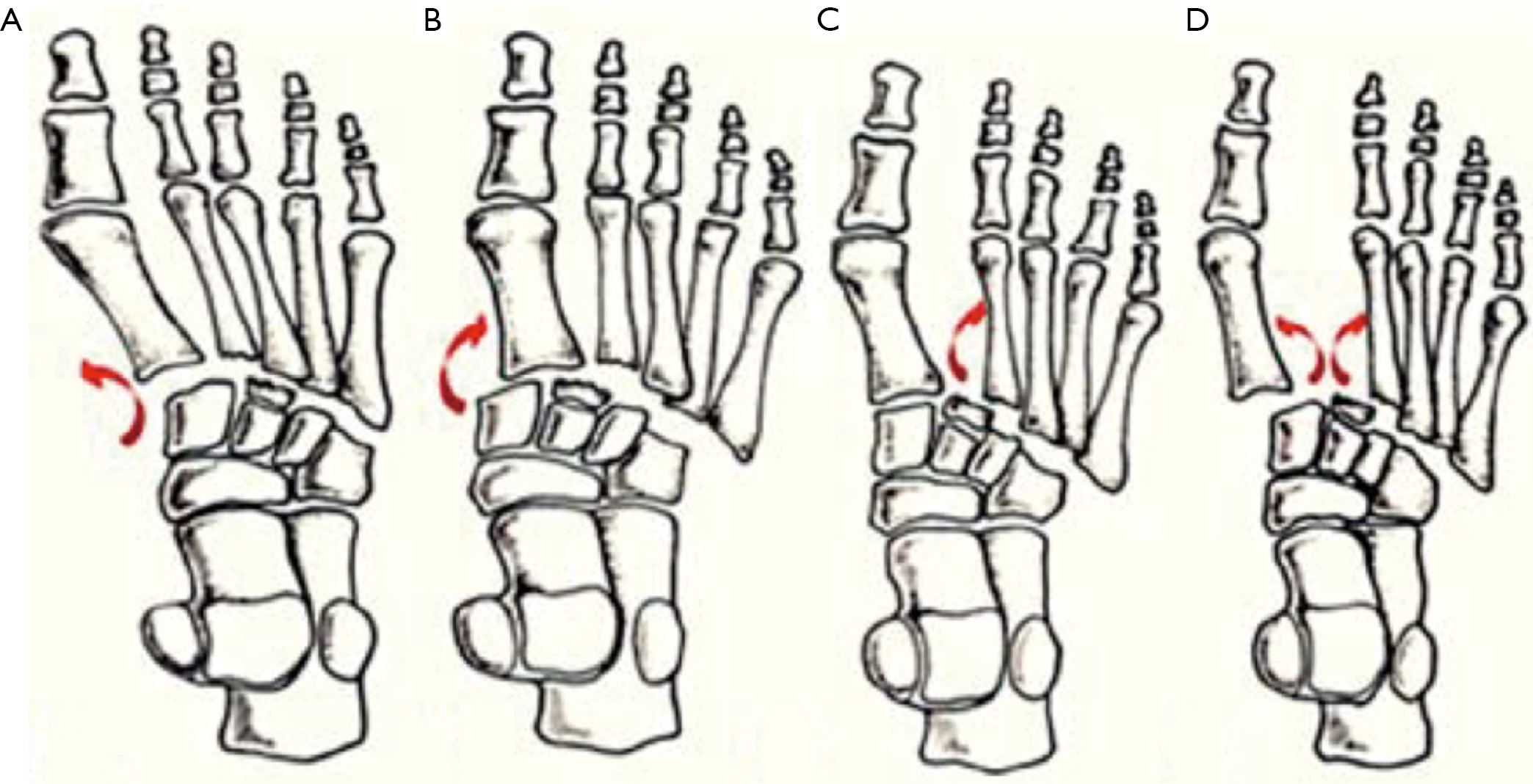 The specimens were provided by Tongji University, School of Medicine. Ten fresh frozen cadaveric lower extremities were stored at −20 °C and thawed to room temperature before testing. Mean age of the specimens was 46.3 (ranging from 26 to 60) years old. There were six male and four female specimens. There were five left feet and five right feet. This was a cadaveric study, thus the ethics approval was not required for this study.

The femur was transected approximately 15 cm above the condyles of femur. The knee joint was fused by using three 3.5-mm Steinmann pins. The skin, subcutaneous tissues, neurovascular bundle, and extensor tendons were removed without any injury of the bony and ligamental structures. The Achilles tendon, peroneus longus, peroneus brevis, flexor digitorum longus, flexor hallucis longus, and posterior tibial tendon were exposed, and left for tensile loading (Figure 3). The fusion fixation was done with the 3.5-mm fully threaded cannulated screws. For the isolated 4th TMT joint fusion, a screw was placed across the 4th metatarsal into the cuboid. For the whole midfoot lateral column fusion, another screw was placed in an axial direction from the 5th metatarsal into the cuboid. And the starting point of this screw was on the lateral apex of the triangle-shaped 5th metatarsal to obtain optimal fixation. For the isolated 5th TMT joint fusion, the screw for isolated 4th TMT joint fusion was removed (Figure 4). 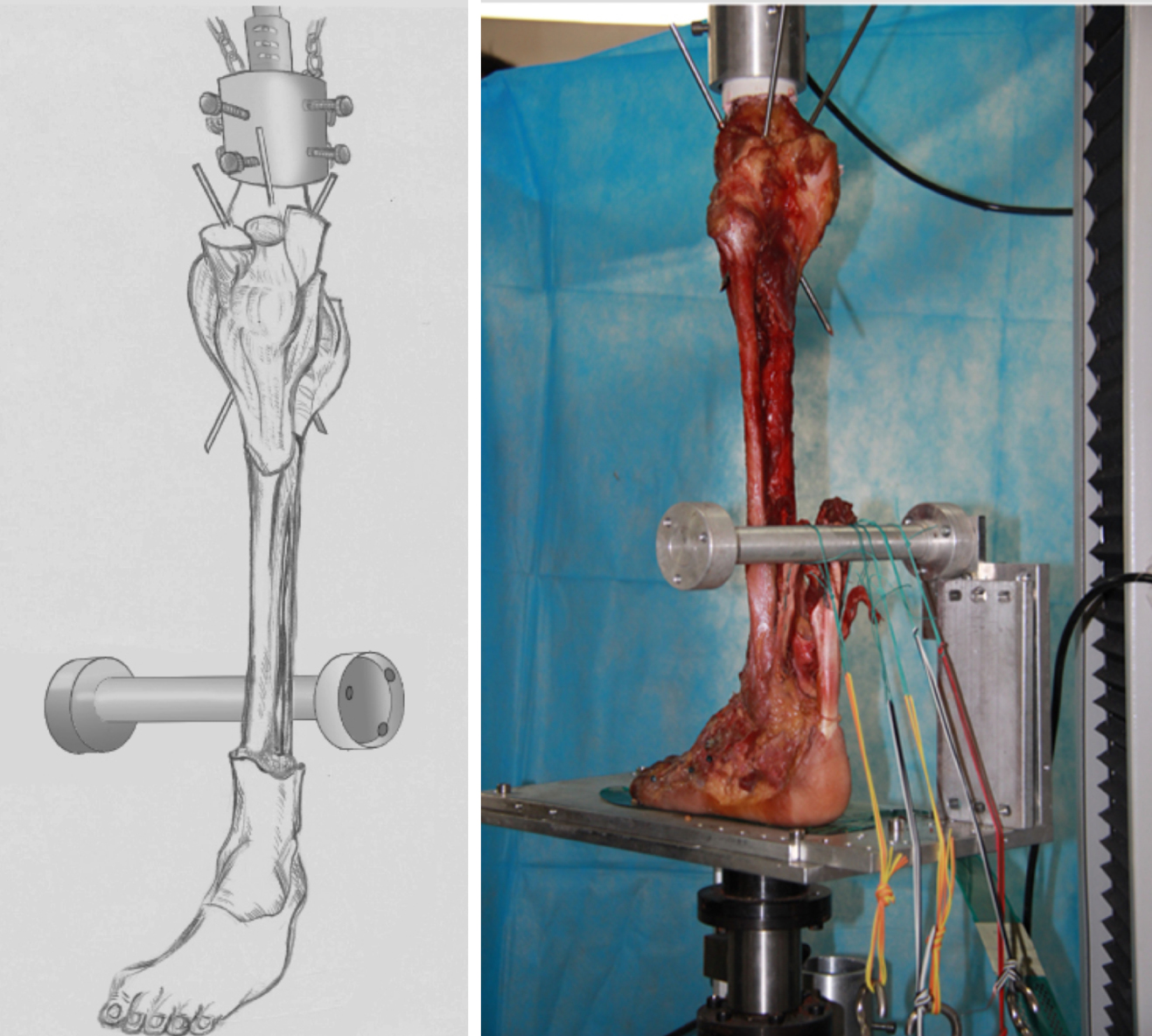 In this study, each specimen was examined in a quasi-dynamic state simulating two-legged stance with the tibia at 90° to the floor. The specimens were mounted onto a holding device to maintain consistent vertical alignment during testing. The device was attached to a loading frame (DDL 20, Changchun Academy of Machinery Science & Technology Co. Ltd). Each tendon of muscle was stripped then sutured. The tensile load was applied to them: posterior tibial tendon, 40 N; flexor digitorum longus, 22 N; flexor hallucis longus, 22 N; peroneus brevis and peroneus longus combined, 35 N; and Achilles, 200N. The tensile load was associated with the peak contractile tension of the triceps surae strength percentage, work percentage, and cross-sectional area (22,23). Before each measurement, an external 72 to 400 N straight axial force was applied cyclically at 0.5 Hz for 30 cycles to keep muscle tensioning and mechanical equilibrium.

The calibration was confirmed that the load measured by the pressure sensors during testing was within 8% of the applied load (24). The calibration method has been reported previously with the Tekscan software in a study of patellofemoral contact pressure across the trochlear surface (25). With each specimen, measurements were conducted under four conditions: the intact foot, the isolated 4th TMT joint fusion, the 4th and 5th TMT joints fusion, and the isolated 5th TMT joint fusion. Both plantar pressures and calcaneocuboid joint pressures were recorded under each condition.

All the radiographic parameters and plantar pressures were assessed under each condition to identify any difference. All data were expressed as mean ± standard deviation, and analysis was conducted with SPSS 20.0 by using one-way ANOVA analysis of variance. LSD was used in pairwise comparison. Significance was set at P<0.05. 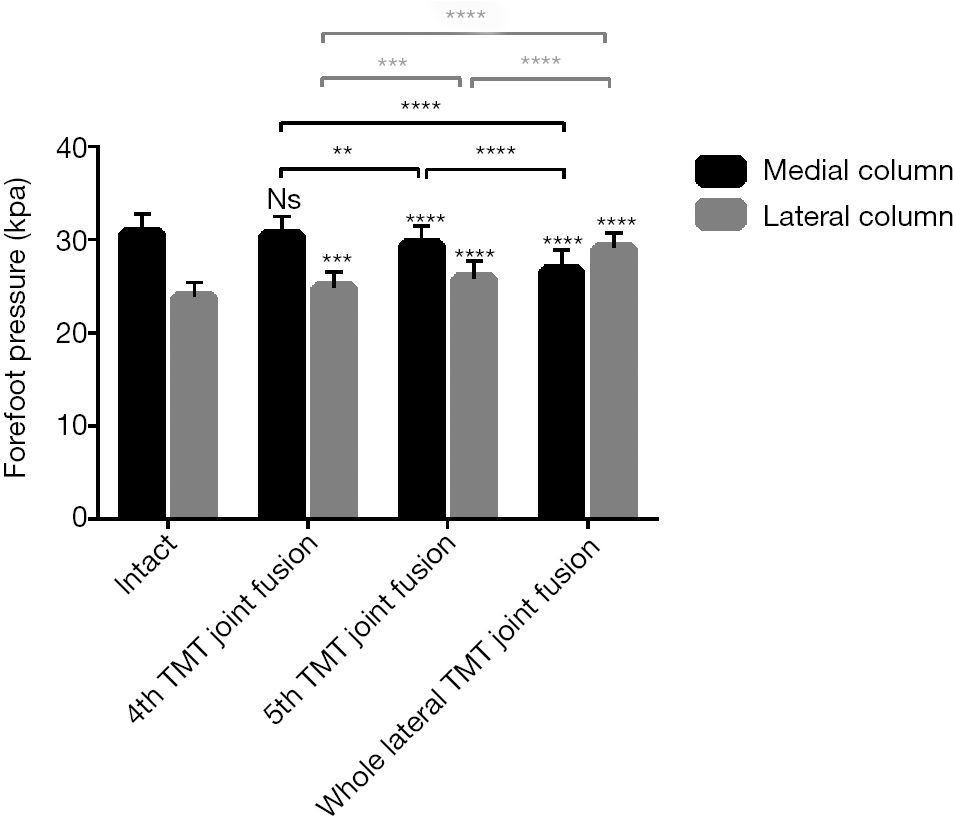 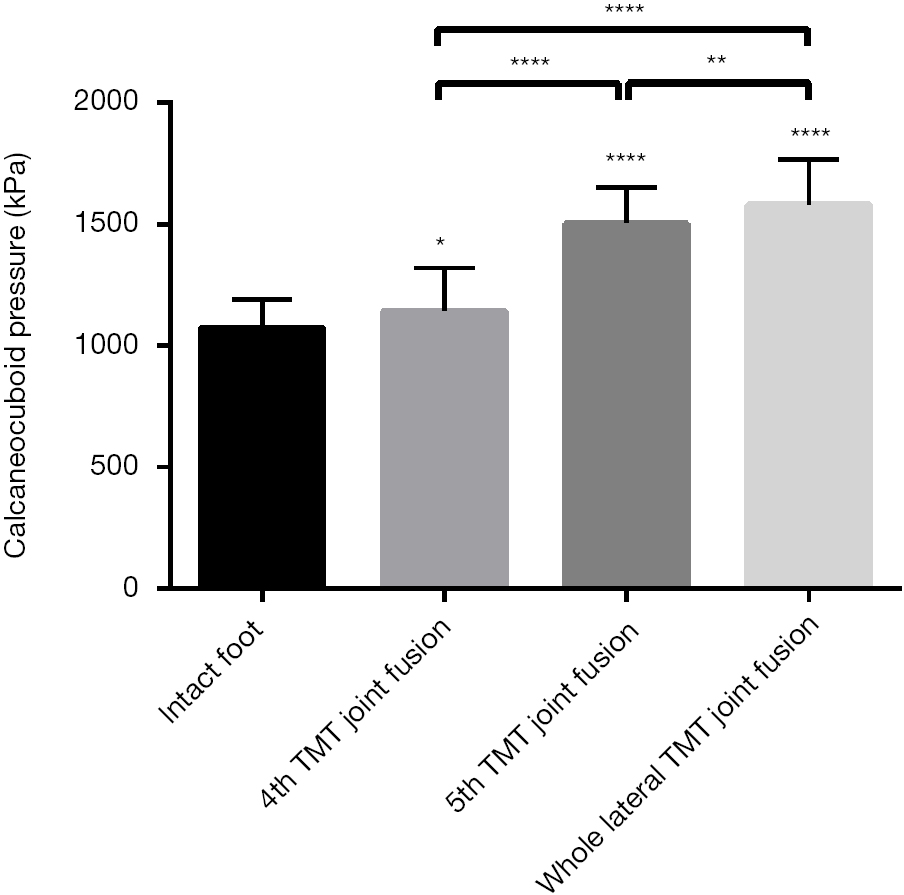 Previous studies (7,8,13) have shown that the 4th and 5th TMT joints were allowed for larger mobility than other TMT joints which could accommodate the forefoot on uneven terrain and buffer the pressure during walking. Consequently, arthrodesis regarding midfoot lateral column was not recommended usually. Komenda et al. (28) conducted a retrospective study in 32 patients with TMT joints fusion and reported that two patients with fusion of all the 5th TMT joints required subsequent osteotomies due to intractable metatarsalgia. A study by Yu GR et al. (29) also indicated that rigid fixation of the 4th and 5th TMT joints required a large dissection of soft tissues which was not biomechanically desirable. Sangeorzan et al. (30) followed up 16 patients after TMT joints fusion and reported that five patients had poor outcomes. Unfortunately, these reports enrolled a small number of cases, without addressing the specific problem itself. Under many situations, it was hard to achieve correction of the residual deformity without providing rigid lateral supports by reduction and arthrodesis.

Moreover, there were studies showing optimistic results. Raikin et al. (21) indicated that arthrodesis of the 4th and 5th TMT joints could and should be done in patients with uncorrectable lateral midfoot collapse and rocker bottom foot deformity. Twenty patients showed good outcomes after arthrodesis of the 4th and 5th TMT joints. Rammelt et al. (31) followed up 22 patients with fractures and dislocations of the TMT (Lisfranc) joints and concluded that the difference between patients with medial column fusion and those with the whole tarsometatarsal joint fusion was not significant.

There were still some limitations of this study. It was a cadaveric study which did not simulate the clinical settings exactly. The specimens were cyclically loaded in a neutral position which could not imitate the real gait phase in uneven terrain. Moreover, the specimens did not have pathologic changes which might typically found in real patients. In order to achieve the maximum control of variable, the specimens were not removed during the experiment and the joints were fused without resecting the joint surfaces. Thus, further biomechanical studies should be conducted to investigate the influences of different models on uneven surface.

Funding: This study was funded by Key Specialty Construction Project of Pudong Health and Family Planning Commission of Shanghai (Grant No. PWZzk2017-25).

Conflicts of Interest: The other authors have no conflicts of interest to declare.

Ethical Statement: The authors are accountable for all aspects of the work in ensuring that questions related to the accuracy or integrity of any part of the work are appropriately investigated and resolved. This was a cadaveric study, thus the ethics approval was not required for this study.