Comparison of efficacy between video-assisted thoracoscopic surgery and thoracotomy in children with mediastinal tumors: 6-year experience

The records of the patients who received surgery at our department between March 2012 and September 2018 were obtained. A total of 167 patients with a mediastinal lesion were identiﬁed. Of them, three patients who had large tumors in anterior or upper mediastinum died of respiratory collapse during general anesthesia and were excluded from our study. Clinically, two of them might have malignant lymphomas and one might have germ cell tumor (Table 1). All patients who had received puncture biopsy for diagnostic intent were not involved. A total of 137 patients who had undergone VATS or thoracotomy were enrolled in this study. The patients’ age ranged from 0 to 155 months. This retrospective study was approved by the Medical Ethics Committee of Children’s Hospital of Nanjing Medical University.

All patients were assessed with computed tomography (CT) before surgery, and magnetic resonance imaging was prescribed for those suspected of having paravertebral sulcus or vertebral invasions. Five patients’ operations were performed with the assistance of a neurosurgeon because their lesions were found to be associated with the spinal canal (Table 2). Early complications were deﬁned as undesired events during hospitalization or within the ﬁrst week after discharge. Late complications were deﬁned as unfavorable events that occurred between day 7 and day 30 after discharge. Physical examination and CT scans were performed 6 months and 12 months after surgery, and then once a year to detect recurrence.

All the operations were conducted by 3 surgeons, who determined the surgical approach according to the size and location of the tumor and their preference (Figure 1).

A total of 137 patients were enrolled in the study, of which 43 (31.4%) underwent VATS and 94 (68.6%) underwent thoracotomy (including 4 whose surgical approach was converted). Two patients who underwent open surgery were excluded from the study because they were lost to follow-up. There was no significant difference in gender, age, weight and tumor distribution between the two groups. The number of patients with malignant tumors who underwent thoracotomy was significantly higher than those who received VATS (78.0% vs. 22.0%, P=0.04). The patients who received thoracotomy had signiﬁcantly larger mean tumor diameter than those who underwent VATS (7.6±3.8 vs. 4.4±1.7 cm, P<0.001) (Table 3). 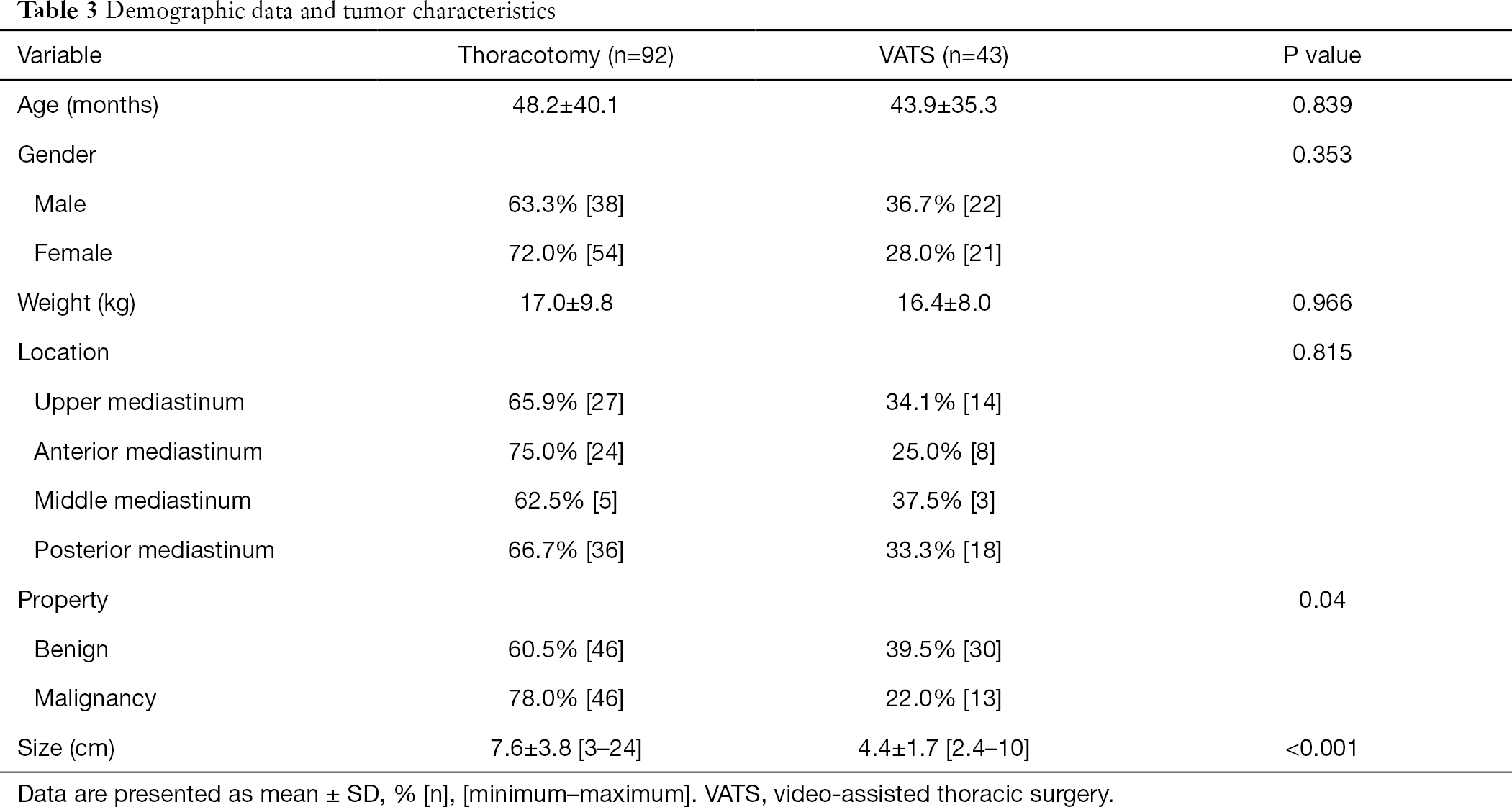 There was no difference between the two groups in terms of postoperative complications. The most common early complication was diaphragmatic eventration which occurred to 3 (2.2%) patients. Two patients (1.5%) had repeated pleural effusion and one had an esophageal rupture during thoracotomy for which esophageal repair was performed. In the late period, two patients (1.5%) had wound site infection.

One patient who had tumor invasion in the main airway died of airway obstruction during thoracotomy. No mortality occurred in either group in the ﬁrst 30 postoperative days. The pathological data of all cases are listed in Table 5. Of all the cases, ganglion cell neuroblastoma (n=26, 19.3%) was the most common lesion, and neuroblastoma (n=22, 16.3%) ranked the second. Neurogenic tumors account for 41.5% of all lesions. During the follow-up, no significant difference was found in recurrence rate between the two groups; local recurrences were found in 8 (8.7%) patients who underwent open surgery. Among these patients, three (including one who refused chemotherapy) died of recurrence at month 2, 3, 8 after surgery respectively; reoperation was attempted in two patients whose had recurrent neuroblastoma and mixed germ cell tumor at postoperative month 10 and 11.2; two patients who had recurrent ganglion cell neuroblastoma at postoperative month 12 and 19 refused reoperation because they could not afford the expenses; another patient had a recurrent lymphangioma at postoperative month 2. The latter three patients were kept under close follow-up. Although four patients underwent thoracotomy died, there was no significant difference in mortality between the two groups (Figure 2). 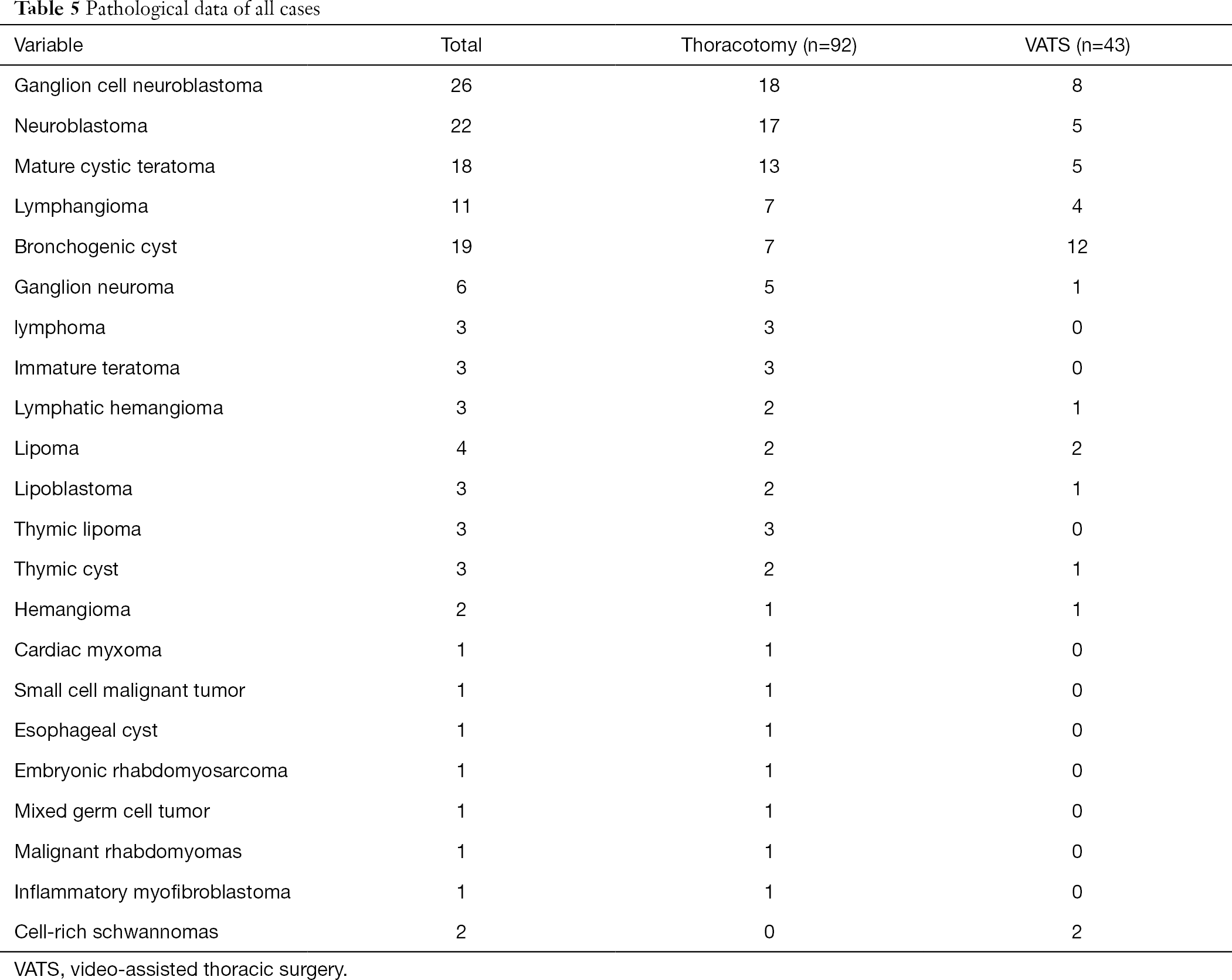 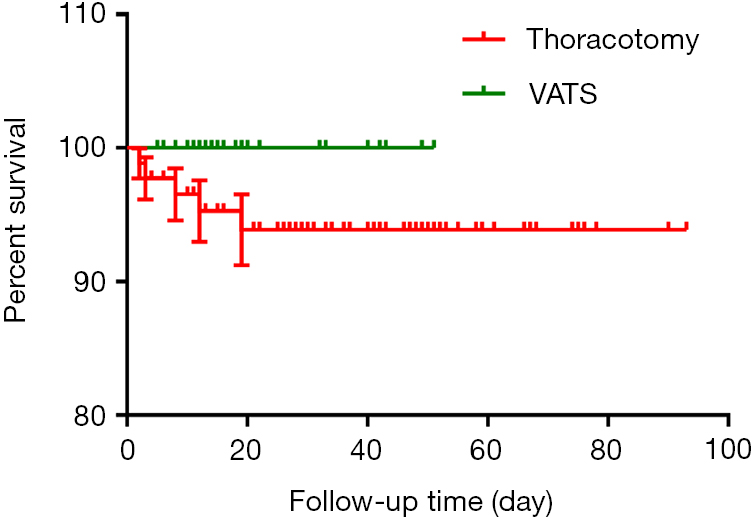 Figure 2 The overall survival plots of thoracotomy vs. VATS. There was no significant difference between the two groups. VATS, video-assisted thoracic surgery.

Fatalities resulting from severe airway and cardiac compression during general anesthesia induction with mediastinal tumors have been reported (6,7). Kawaguchi et al. (8) have reported orthopnea as a predictive risk factor associated with airway obstruction during general anesthesia induction for pediatric mediastinal tumors. In our study, the 3 patients who died during anesthesia induction developed cough, wheezing and chest tightness; two of them with orthopnea could hardly lie flat. Despite the use of the reclining position and the rigid cannula during intubation, severe airway collapse occurred. For cases with suspected lymphoma in the upper or anterior mediastinum and a high risk of cardiorespiratory morbidity during general anesthesia induction, prebiopsy steroid treatment was offered to reduce the tumor size and lower the anesthesia risk. For the cases with compression caused by a large substantial tumor, if necessary, the tumor was removed under the extracorporeal circulation via the femoral artery and vein cannula (9). One patient survived with this method but had more bleeding loss during surgery due to heparinization. In addition, improvements in anesthesia strategies, including induction of anesthesia in a sitting position and maintenance of spontaneous breathing, were effective in reducing the risk of anesthesia.

Mediastinal tumors have complex pathology and varied subtypes, including neurogenic tumors, reproductive-derived tumors, lymphoid tumors, teratomas, bronchogenic cysts, cardiac tumors and lipomas, among which neurogenic tumors and teratomas are the most common types (10). In our study, 56 (41.5%) of the 135 mediastinal tumors were neurogenic tumors, 21 (15.6%) were teratoma, 19 (14.1%) were bronchogenic cysts, and 17 (12.6%) were vascular origin tumors. Mediastinal tumors have no obvious clinical symptoms in the early stage, but the development of tumors may stimulate the pleura and compress trachea, great vessels, esophagus and nerves. As a result, atypical clinical symptoms such as cough, respiratory distress, lip cyanosis and chest pain may occur.

Thoracotomy and VATS are two most recommended options for mediastinal lesions. The incision for thoracotomy is based on the position of the tumor. The children’s chest is elliptical and elastic, which avails to easy and clear exposure of the tumor (11). Also, thoracotomy is a comparatively simple procedure and can be applied for large tumors and severe thoracic adhesion. However, open surgery may cause more bleeding, resulting in longer operative and recovering time. Moreover, thoracotomy breaks the thoracic structure, which seriously affects the patient’s appearance. Thoracoscopic surgery has been reported to detect and diagnose chest diseases in pediatric patients since 1976 (12). Due to the limitations of surgical instruments and techniques, the use of thoracoscopy is relatively limited until Peter W. first introduced VATS in pediatric patients in 1993 (13). Since then, VATS surgery has become popular in children with chest diseases, including mediastinal tumors. Compared with open surgery, thoracoscopic technique has the advantages of clear anatomy, less bleeding, small incision, quick recovery, and less postoperative complications (4,5,14). It has gradually become a routine procedure for pediatric thoracic surgery. But VATS has its own limitations, such as limited operating space and high requirement of the anesthesia and surgical skills.

Liu et al. (15) believe that open surgical methods are preferable for tumors >8 cm. Li et al. (16) report that thoracotomy is necessary for tumors larger than 6 cm. While those are all based on surgical data of adults, few have been reported in children. In this study, the mean tumor size of thoracotomy group was 7.6±3.8 cm, and VAST group was 4.4±1.7 cm (P<0.001). A total of 46 (78.0%) patients with malignant tumors underwent thoracotomy, and 13 (22.0%) underwent VATS (P<0.05). Therefore, our results also revealed open surgery is preferable for patients with large and malignant masses.

In our study, four patients were converted to open surgery because of severe adhesions in the chest cavity. For patients with pleural effusion or those who need pulmonary surgery, preoperative evaluation was needed to determine the final procedure.

Approximately 35.8–52% of pediatric mediastinal masses occur in the posterior mediastinum, most of which are of neurogenic origin (17,18). In addition, approximately 10–20% of posterior mediastinal neurogenic tumors have a spinal canal component (19). In our study, 54 (40%) patients were diagnosed with posterior mediastinal tumors and 5 had intraspinal invasion. Since their tumors were suspected of neurogenic tumors, MRI was routinely performed to determine whether the tumor has intraspinal invasion. During the operation, a neurosurgeon was invited to participate in the surgery to ensure maximized removal of the tumor. One patient suffered local relapse and received reoperation. All those patients were alive and under close follow-up.

Our study had several limitations. Because we included all kind of mediastinal tumors, disease heterogeneity was inevitable. The proportion of cases with malignant and lager masses was higher in open surgery group than in VATS group. And other limitations include the small sample size, short follow-up, and retrospective nature. Despite those limitations, we describe our initial experience regarding the safety and effectiveness of VATS by comparing it to open surgery. VATS might be a safe and feasible approach for mediastinal tumors, and thoracotomy is appropriate for large tumors with neuroforaminal involvement. In the future study, multicentered and prospective investigations with a larger sample size and a longer follow-up are required to confirm the roles of these two procedures in pediatric patients.

Funding: This work was supported by funding from The National Natural Science Foundation of China (81770509), Jiangsu Provincial Special Program of Medical Science (BL2013003).

Ethical Statement: The authors are accountable for all aspects of the work in ensuring that questions related to the accuracy or integrity of any part of the work are appropriately investigated and resolved. This retrospective study was approved by the Medical Ethics Committee of Children’s Hospital of Nanjing Medical University.