The concept of TD was proposed by scientist Gabriel as early as 1935. He discovered and reported the tumor-like nodular masses besides the colorectal tumor and in the fat tissue of mesocolon and mesorectum (1). With the deepening of research, the conclusion that TD is a poor prognosis for colorectal cancer has been confirmed eventually (2-4) and was finally included in the N1c stage in colorectal cancer separately in the 7th edition of the TNM staging (5). Puppa et al. reported that TD not only existed in colorectal cancer but also other solid malignant tumors such as gastric cancer, cholangiocarcinoma, and pancreatic cancer (6). However, the prognostic value of TD in gastric cancer is controversial. In the 8th edition of TNM staging, TD tend to be considered as metastatic lymph nodes (7), while there is some studies that indicate that TD should be regarded as serosal invasion (8,9). This study aims to invest the value of TD in the prognosis of gastric cancer through propensity score matching (PSM).

A prospective retrospective database was applied by this study, including the consecutive gastric cancer patients with curative resection from October 2007 to October 2012 in Sun Yat-sen Memorial Hospital. There is no intentional inclusion or exclusion. All patients diagnosed with gastric cancer at in our institution were registered with the follow-up data, including survival state, causes of death, and the follow-up times. Follow up data were recorded through telephone, email, and outpatient.

Patients diagnosed with gastric cancer from October 2007 to October 2012 were selected along with their clinicopathological data, including sex, age, method of therapy, tumor deposits (TDs), lymphatic nodes, depth of invasion, differentiated degree, the follow-up date, overall survival (OS), and cancer-specific prognosis. All the selected patients are performed curative tumor resection with lymph node dissection, but not including gastric cancer resection and combined metastatic organ resection. Patients with malignancies other than gastric adenocarcinoma, or recurrent gastric cancer, or gastric stump cancer, or accepted neoadjuvant chemotherapy, patients with the number of LN detection less than 15 were excluded. Finally, a total of 803 patients were included. According to the 8th edition of TNM staging in gastric cancer (10), only when center of tumor is 2 cm away from the gastroesophageal junction, the tumor should be including in TNM staging for gastric cancer.

TD was defined that discrete foci of tumor found in the perigastric fat or adjacent ligament away from the primary tumor, without evidence of residual lymph node tissue but within the lymph drainage area of the primary tumor. The examination for TD was dependent on two pathology professors at Sun Yat-sen Memorial Hospital by a double-blind method, and if there is a disagreement between them, the third pathology professor will diagnose it. The depth of invasion and lymphatic nodes metastasis were classified by 8th edition of TNM staging system.

To estimate propensity score, logistic regression analysis was performed using nearest neighbor matching. The ratio for matching was 1:2 using a caliper of width equals to 0.2 of the standard deviation of the logit of the propensity score.

Survival analysis was performed using the Kaplan-Meier method with log-rank analysis to compare survival functions between groups. Multivariable cox regression analysis was applied to consider the association between TD and prognosis. Patients who died from other cause or still were alive were treated CSS. Survival rates between groups at 60 months were reported.

Statistical significance was considered at P<0.05. All analyses were performed using the R language version 3.4.2.

Patient’s clinicopathologic characteristics before and after propensity score match 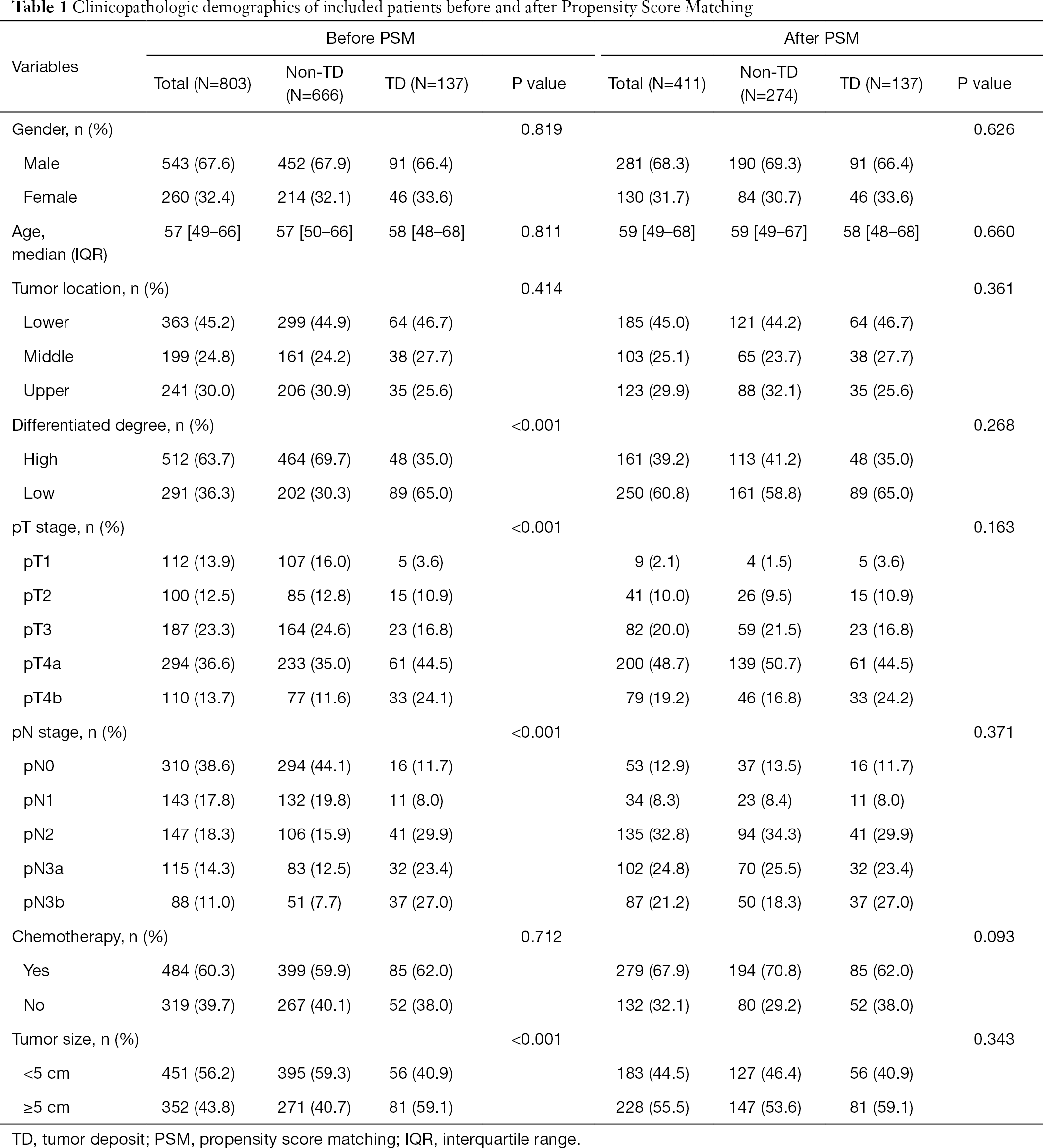 After a propensity score match of 1:2, 137 patients with TD and 274 patients without TD were obtained, and there was no significant difference in between the two groups considering gender, age, tumor location, differentiated degree, pT stage, pN stage, chemotherapy, and tumor size (Table 1).

Survival analysis in the matched cohort 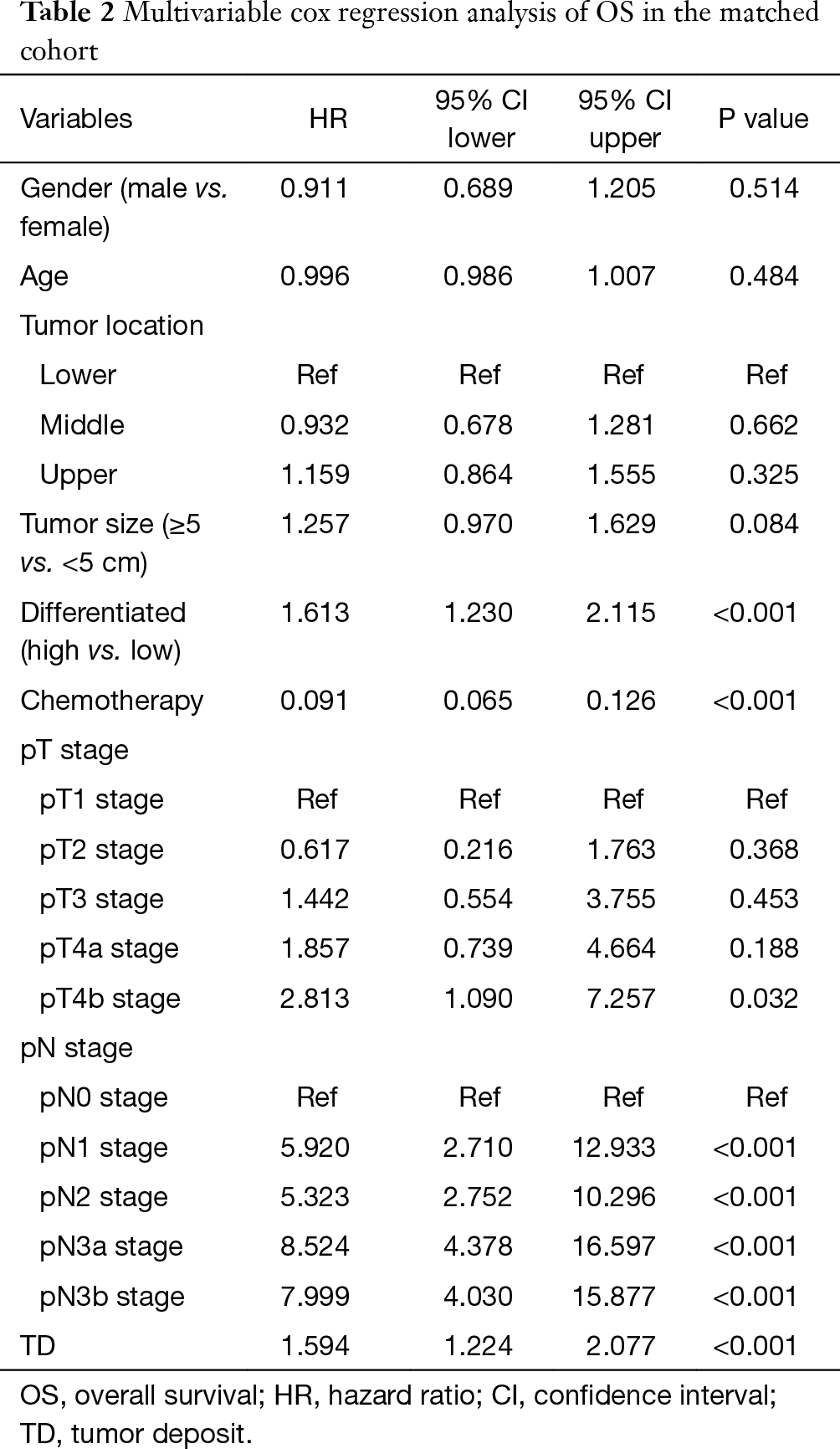 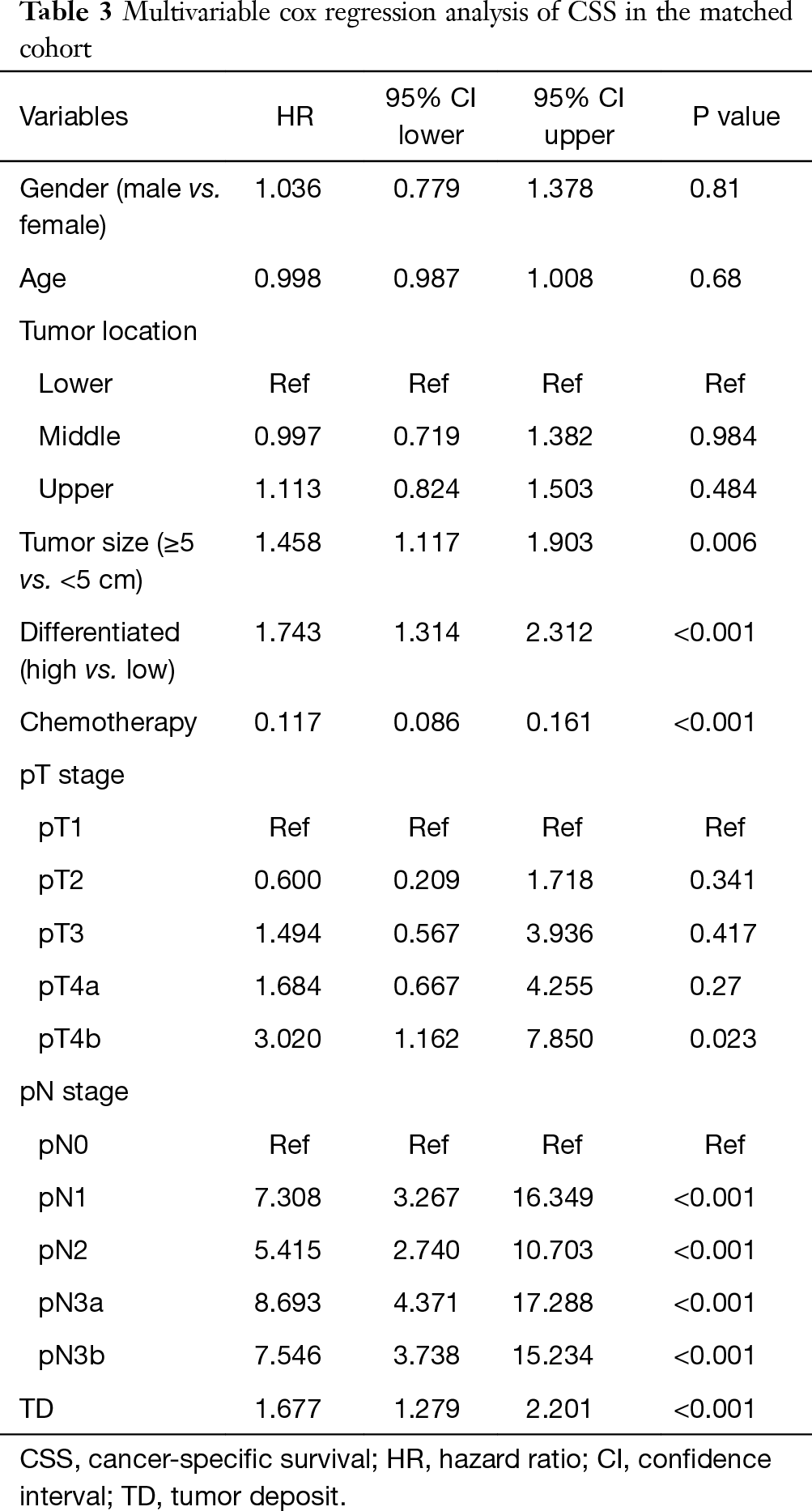 Survival analysis in all patients 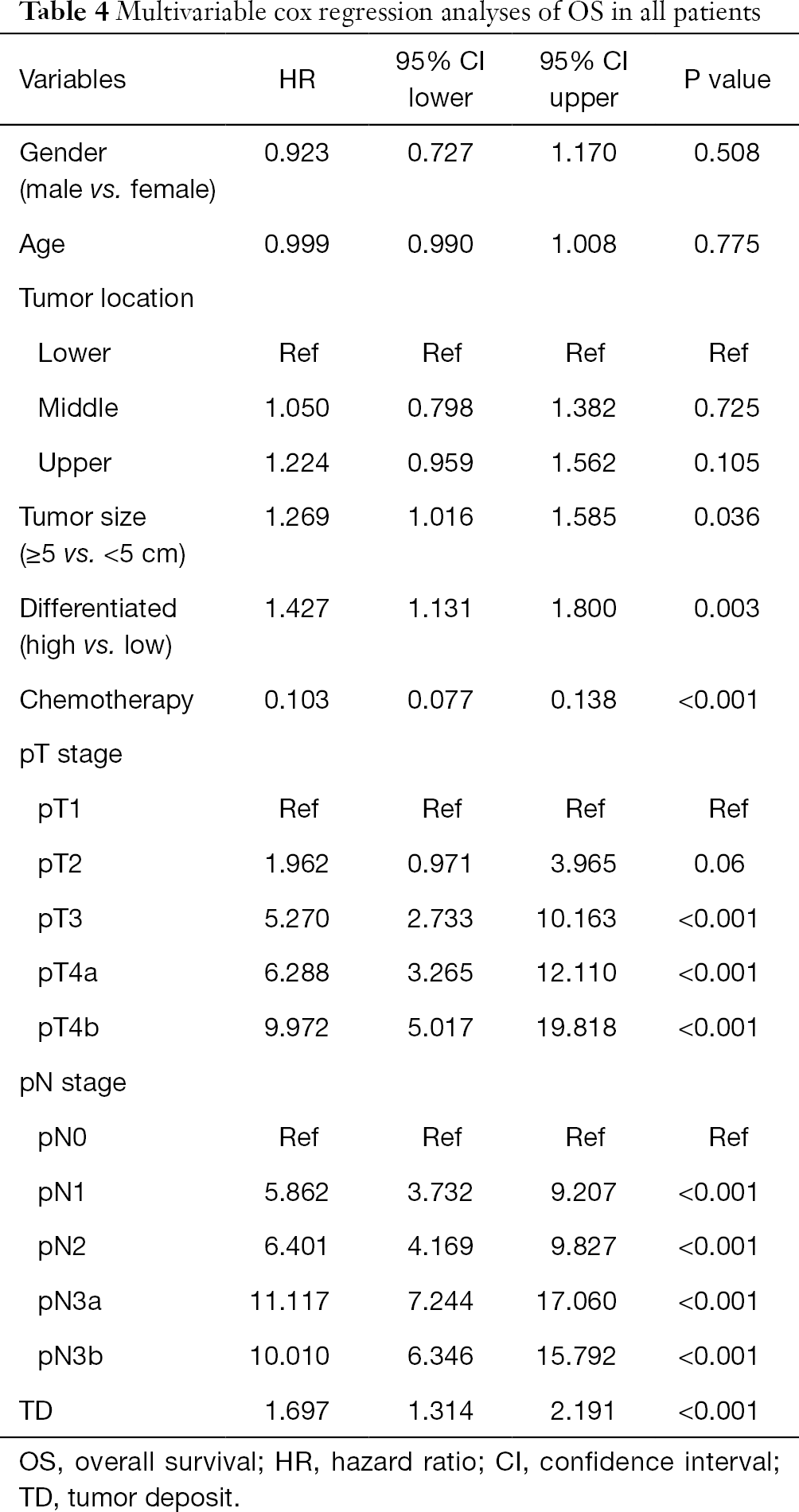 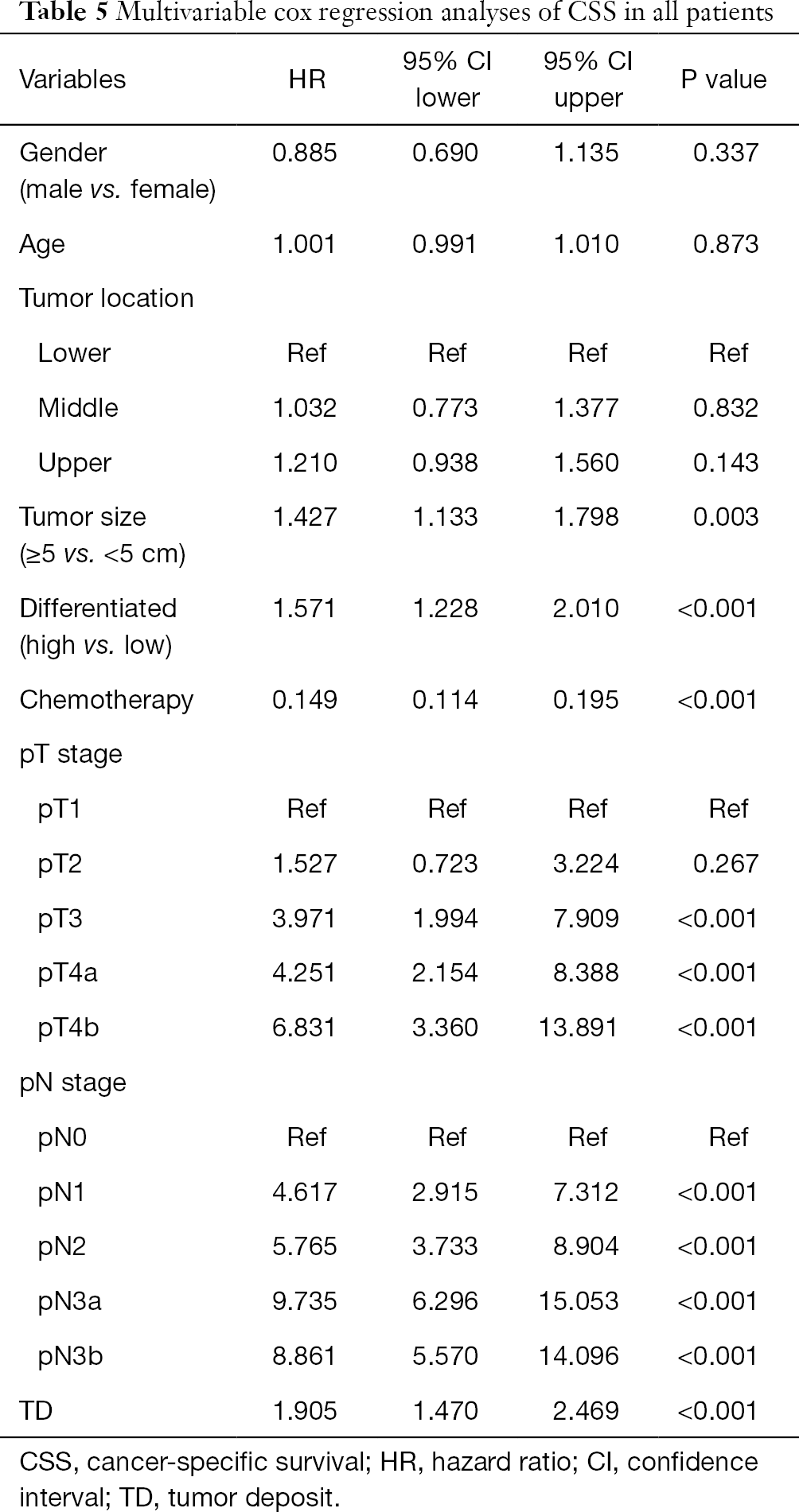 With the advances made in medicine, more attention is paid to the examination of the pathology of specimens after curative surgery of gastric cancer. In the pathological examination, an increasing number of lymph nodes, vascular invasion, nerve infiltration, and TDs were discovered and reported (11). Many studies had reported TD indicated worse prognosis in a variety of malignancies (12-14). However, the significance of TD in gastric cancer is still controversial.

To analyze the effect of TD on the prognosis of gastric cancer, we used PSM analysis. This analysis method considers and eliminates potential factors that may have an impact on the outcomes, widely applied to multicenter cohort researches (15). In our study, we recorded the baseline data included age, tumor size, differentiated degree, gender, pT stage, pN stage and tumor location, chemotherapy, and there exist difference in these baseline data between TD group and non-TD group, which may affect the survival outcomes independently. After PSM, the quality of analysis has improved significantly with the elimination of the difference in baseline data.

Whether the TD should be incorporated in pN or should be considered in TNM staging in gastric cancer is controversial. To answer this question, we analyze the prognosis between patients with TD and patients without TD in pN0, pN1, pN2, pN3 stage, respectively. The results all showed the appearance of TD made for a worse prognosis on patients with gastric cancer; even the prognosis of patients with TD was comparable to patients with pN3 stage. Interestingly, there are 5 (3.6%) cases with TD in pT1 stage and 15 (10.9%) case with TD in pT2 stage. In Hye Seung Lee’s study, only 2 cases of pT1 stage and 4 cases of pT2 stages were found to have TD, accounting for only 0.9% of the total number of cases (16). These finds support the opinion that TD may be a manifestation of advanced gastric cancer.

Interestingly, there are quite several patients with TD but have no peritoneal metastasis. Therefore, it is not likely to treat TD as a peritoneal metastasis. The appearance of TD is associated with vascular infiltration, neural infiltration, and lymphatic infiltration (19). In other words, the present of TD showed that the tumors had already metastasized through multiple pathways such as blood vessels, nerves, and lymph vessels. This also explains why TD could significantly affect the prognosis of gastric cancer, even comparable to patients in pN3 stage.

The first limitation of this study is the shortage of PSM that we could not match the unrecorded factors which may affect the outcomes. Secondly, the study is a retrospective analysis and therefore, has the related weakness from it. At last, we did not analyze the correlation between number of TD and prognosis. Larger sample studies are needed to confirm this conclusion further.

TD has a marked impact on the prognosis of gastric cancer, even patients with TD had the same prognosis with patients in pN3 stage. Considering these results, we think a TD may not simply be treated as a metastatic lymph node, but it should be staged for independence.

We thank for all the patients and their families taking part in the study.

Funding: This study is supported by the National Nature Science Foundation of China, No. 81572925.

Ethical Statement: The authors are accountable for all aspects of the work in ensuring that questions related to the accuracy or integrity of any part of the work are appropriately investigated and resolved. All procedures performed in studies involving human participants were following the ethical standards of the institutional and national research committee and with the 1964 Helsinki declaration and its later amendments or comparable ethical standards. This study also has been approved by the ethics committee of Sun Yat-sen Memorial Hospital (ID: SYSEC-KY-KS-2018-039).