Breast cancer with ipsilateral supraclavicular lymph node metastasis (ISLNM) is one of the indicators of poor prognosis (1). In 2003, patients with ISLNM were included in the stage IIIc category of the tumor-node-metastasis classification from M1 stage in the sixth edition of the American Cancer Commission staging system (AJCC-TNM) (2). It is suggested that this kind of patient be reclassified from advanced incurable individuals to locally advanced individuals with the possibility of cure. The treatment recommendation was also changed into a comprehensive scheme of chemotherapy plus surgery followed by radiotherapy and endocrine therapy.

Only a few retrospective reports have focused on the prognosis of patients with synchronous ISLN metastasis; however, these studies are important because the prospective study of these patients is unattainable. These studies also have several limitations including very small sample sizes, inhomogeneous study populations, selection bias, and absence of pathological proof for ISLN metastasis, which results in over staging.

Neoadjuvant chemotherapy (NAC) combined with or without targeted therapy is already the standard treatment model for locally advanced breast cancer. Patients who attain pathologic complete response (pCR) in breast and axillary sites have improved survival and are highest in aggressive HR–HER2− and HER2-positive tumor subtypes (3). However, there is no study on the related factors and prognostic value of supraclavicular pCR in breast cancer after NAC. We aimed to investigate the influencing factors of supraclavicular pCR and its relationship with disease-free survival (DFS) for breast cancer patients with pathologically proven synchronous ISLN metastases.

We retrospectively and consecutively identified a total of 214 patients treated with NAC followed by breast, axillary, and supraclavicular lymph nodal surgery in the Department of Breast Surgery, Henan Cancer Hospital from August 1, 2012 to April 10, 2018. The key inclusion criteria were as follows: (I) the breast lesions were diagnosed as primary unilateral invasive breast cancer by coarse needle biopsy before chemotherapy; (II) the ipsilateral supraclavicular lymph nodes (ISLN) were confirmed to be cancer metastasis by fine needle or coarse needle puncture; (III) estrogen receptor (ER), progesterone receptor (PR), human epidermal growth factor receptor 2 (HER2), and Ki-67 data integrity; (IV) acceptable NAC ≥2 cycles. The exclusion criteria were as follows: (I) bilateral breast cancer; (II) distant metastasis at diagnosis; (III) simultaneous or previous history of other malignant tumors. The chemotherapy regimen contained anthracycline only in 33 (15.5%) patients and taxane only in 25 (11.7%) patients. A total of 155 (72.8%) patients received both anthracycline and taxane as NAC. Meanwhile, only 27.8% (n=30) of patients used trastuzumab in the HER2-positive disease (n=108). After NAC, all individuals received standard modified or breast-conserving therapy and ISLN dissection followed by radiotherapy. Concurrent adjuvant endocrine therapy for hormone receptor (HR)-positive disease was recommended. Outpatient registration and telephone follow-up continued until January 26, 2019, with the median length of follow-up being 16.2 months (range, 2.1–74.1 months), and 9 patients being lost to follow-up (4.2%).

Pathologic specimens were reviewed by dedicated breast pathologists at Henan Cancer Hospital. We performed immunohistochemical (IHC) staining for ER, PR, HER2, Ki-67, androgen receptor (AR), cytokeratin (CK5/6), and epidermal growth factor receptor (EGFR) on 5-mm paraffin sections. The criteria were as follows (3,4): positive ER or PR (>1% of tumor cell nuclei staining) or positive AR (>10% of tumor cell nuclei staining) were collapsed into a single HR or AR “positive” category. HER2 positive was defined as 3+ receptor overexpression on IHC staining and/or gene amplification on fluorescence in situ hybridization. “Low expression” was defined as Ki-67 levels below 30%, and “high expression” as levels above 30%. Cases were considered as EGFR positive or CK5/6 positive if any membranous and/or cytoplasmic staining was detected in the tumor cells, even if focal. Breast pCR was defined as no evidence of residual invasive and in situ carcinoma (ypT0). Axillary pCR or supraclavicular pCR was defined as no evidence of metastatic carcinoma (ypN0). DFS was defined as invasive ipsilateral tumor recurrence, invasive contralateral breast cancer, local or regional invasive recurrence, and distant recurrence from time of operation. 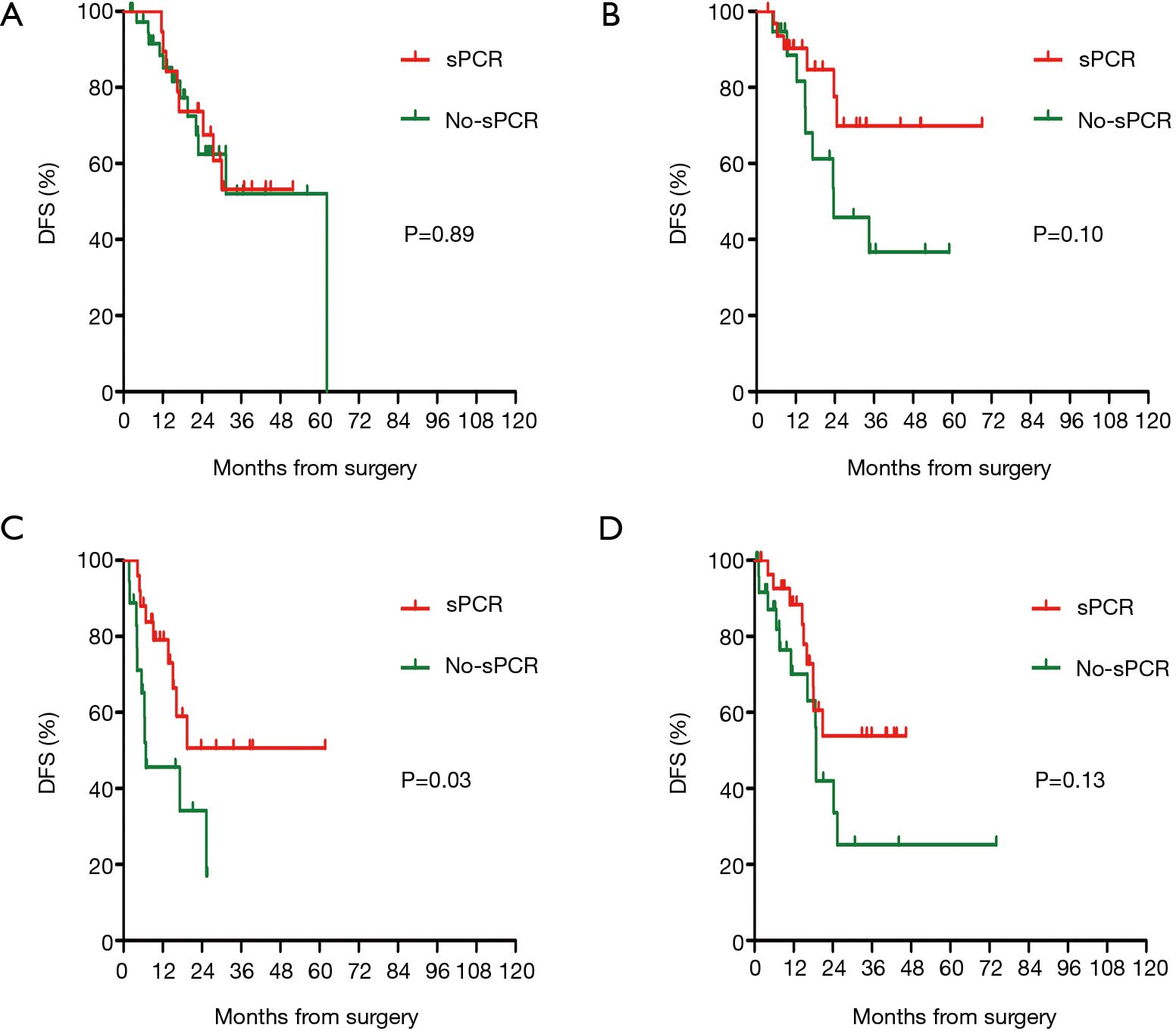 Figure 2 Prognostic impact of sPCR on disease-free survival (DFS) according to breast cancer intrinsic subtype. DFS was notably increased only in highly aggressive HR-HER2- and HER2+ tumors. (A) HR+HER2−, (B) HR+HER2+, (C) HR-HER2−, (D) HR-HER2+. 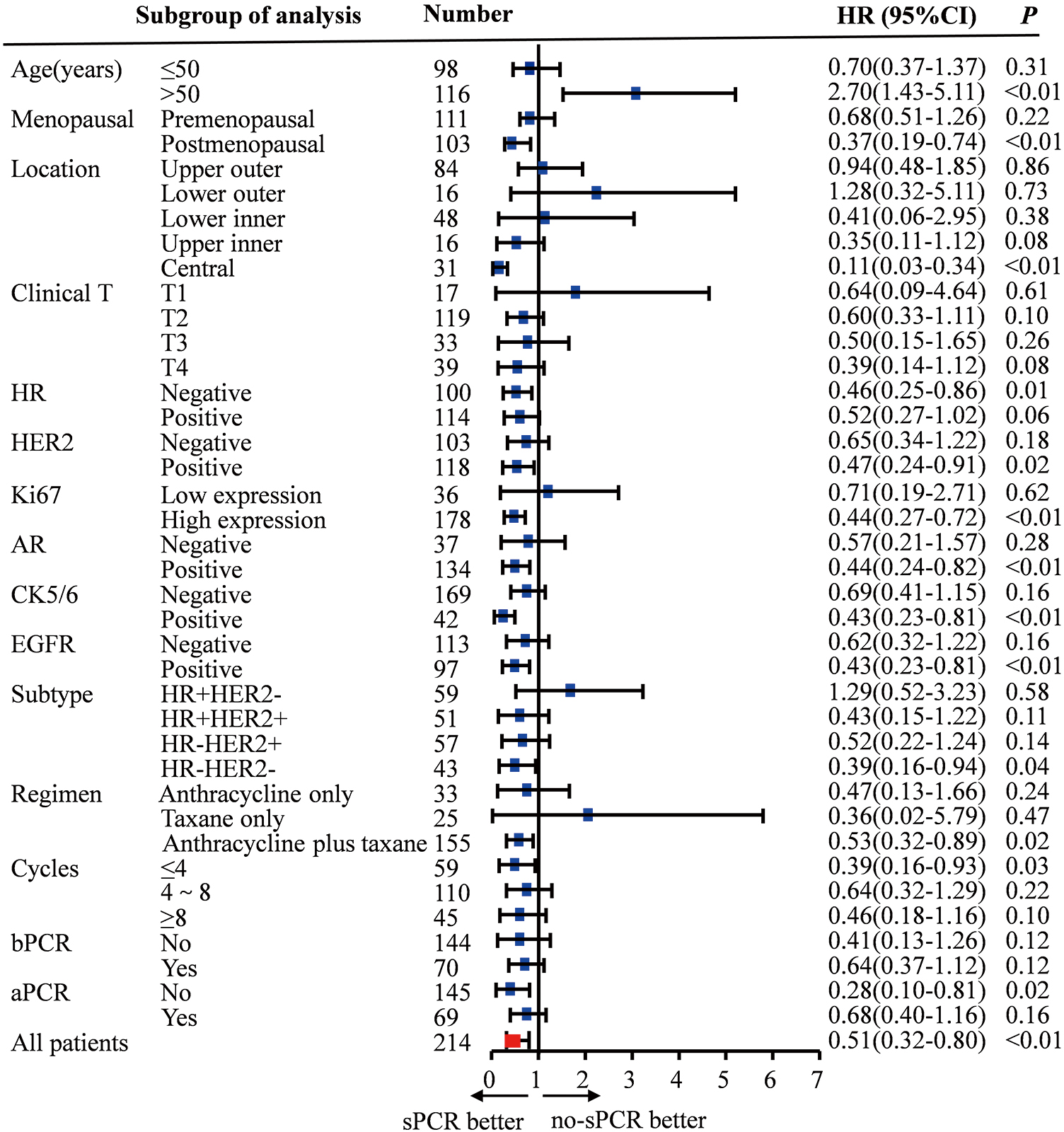 To adjust for confounding factors, a Cox regression model was performed to test effects of supraclavicular pCR interactions with DFS. The HR for DFS favoured those patients achieving supraclavicular pCR after neoadjuvant therapy (HR 0.46, 95% CI, 0.26–0.84, P=0.01), which demonstrated that supraclavicular pCR was an independent and strong predictor for DFS. Unexpectedly, there was no such relationship with breast pCR and axillary pCR (Table 3). 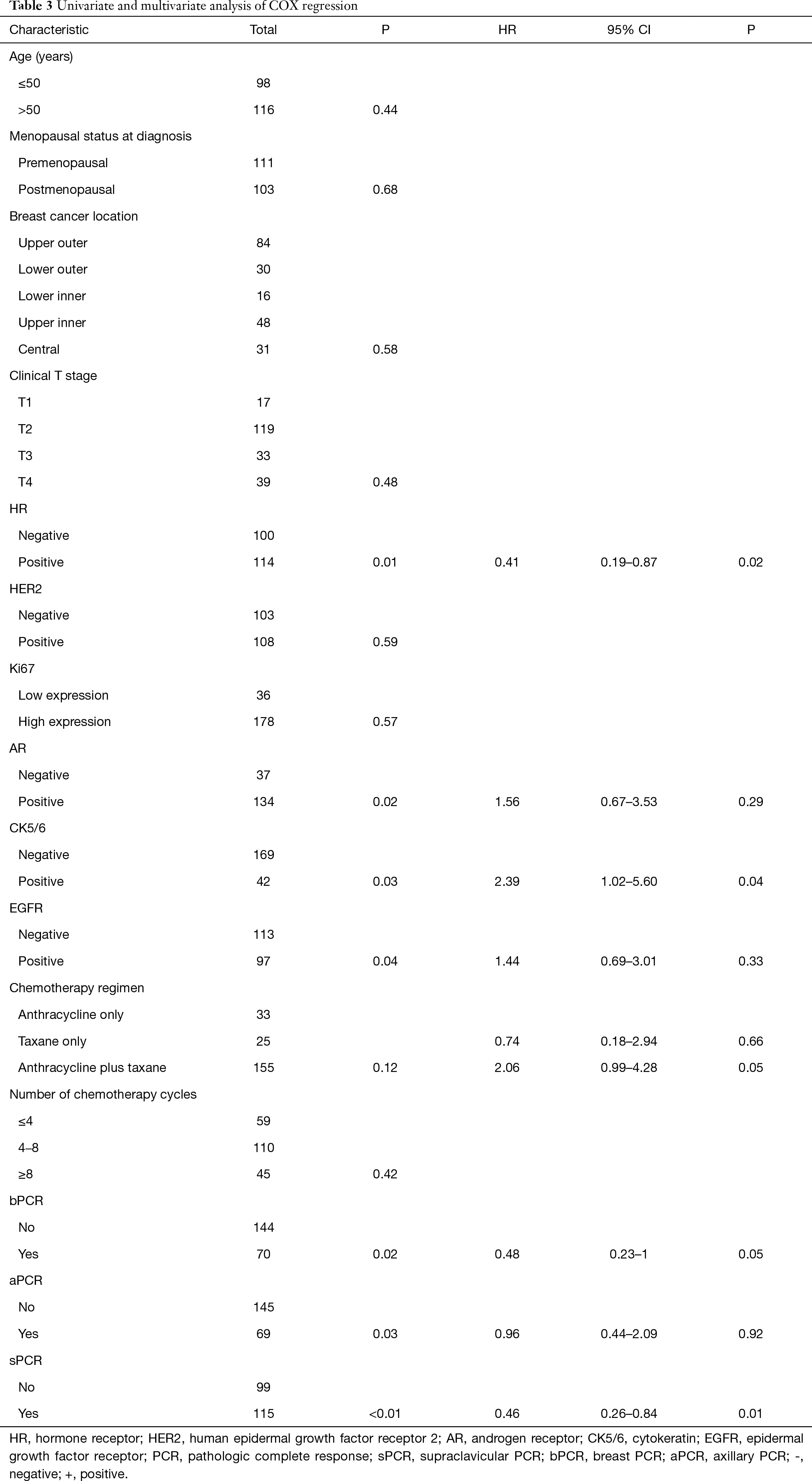 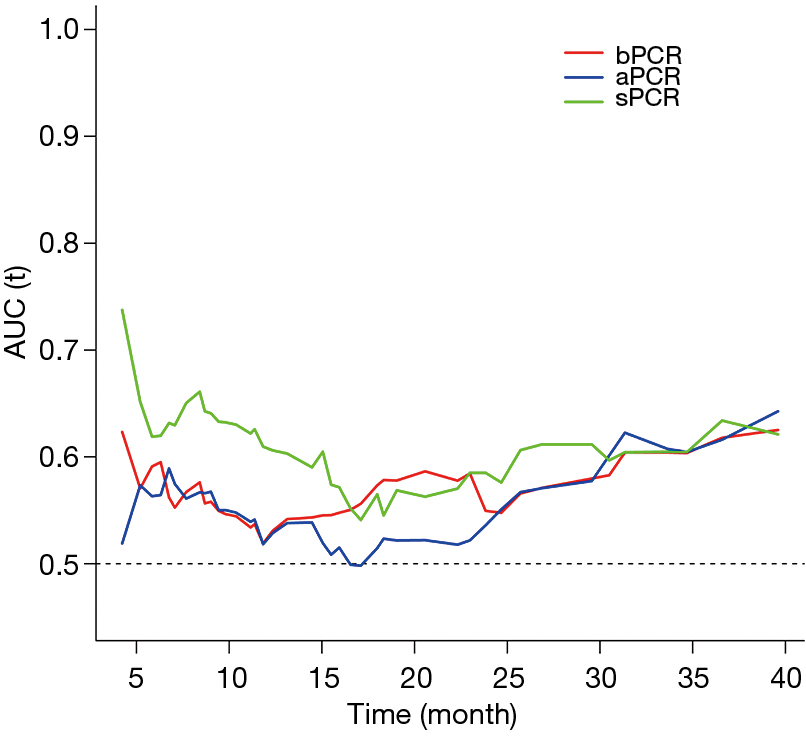 The supraclavicular lymph node is one of the lymphatic drainage fields from the primary tumor to the draining lymph nodes, while the likelihood of lymphatic drainage from the unilateral breast to the ipsilateral supraclavicular is 3.1% (5). Although the incidence of isolated ISLNM in breast cancer is approximately only 1–4% of newly diagnosed cases, it is one of the more important indicators for poor prognosis (6). The occurrence of ISLM in breast cancer has been significantly correlated with a variety of clinicopathological factors. Consistent with previous studies (7), our work also found that ISLM was always found in patients with younger age, larger T stage, HR-negative and HER2-positive tumors. It is suggested that patients with high risk factors of clinicopathological features may also be more likely to develop ISLNM at the time of initial diagnosis.

Based on the study by Brito et al. who put forward the idea that isolated ISLNM breast cancer was curable (8), patients with ISLNM was adjusted and included in the stage IIIc category of the tumor-node-metastasis classification in the sixth edition of the AJCC staging in 2003. Therefore, patients with ISLNM but no other evidence of distant metastases warrant therapy administered with curative intent; i.e., combined-modality therapy consisting of neoadjuvant chemotherapy, surgery, radiotherapy, and endocrine therapy (9). However, there is still controversy pertaining to the treatment method of the local supraclavicular lymph node region in isolated ISLNM breast cancer. A host of researchers believe that supraclavicular area radiotherapy can benefit the patients in survival, which was also recommended in the National Comprehensive Cancer Network (NCCN) guidelines (10,11). However, the value of supraclavicular lymph node dissection (SLND) in such patients is still under debate. On the one hand, a portion of studies assert that SLND can improve the survival of patients (12,13), while others argued that these patients could not receive survival benefit from surgery (14). On the other hand, a plethora of studies have indicated that PCR in the breast and axillary sites should be proposed as a surrogate endpoint for the prediction of long-term clinical benefit after surgery as disease-free survival and overall survival, notably in patients with triple-negative and HER2-positive disease (3,15). However, the related factors affecting supraclavicular pCR after NAC and its relationship between supraclavicular pCR and prognosis are not clear at present. Accordingly, there is growing scientific interest in the identification of predictive factors and the prognostic value of supraclavicular pCR.

Our study has some strengths and limitations. This is so far, to our knowledge, the first and largest collective study on treated primary breast cancer with ISLNM which investigates supraclavicular pCR as a predictive and prognostic factor after NAC. The limitations are, first, that this is a retrospective report rather than a prospective clinical study with a higher level of evidence. Secondly, all patients collected in the study were treated with supraclavicular surgery combined with radiotherapy, and there were no patients who received radiotherapy alone. Finally, our early survival results need to be confirmed by a longer follow-up. The importance of a long-term follow-up is acknowledged, and these results, together with those of the overall survival analysis, will be reported in the future.

The findings from this study evaluating the largest group of patients with ISLNM at diagnosis indicate that ISLN was more likely to reach PCR than primary breast and axillary node metastases tumors after NAC. Supraclavicular PCR was highly correlated with the expression of Ki67, breast pCR, and axillary pCR. Our results also confirm that supraclavicular pCR was an independent predictor for DFS, mainly manifesting in HR-HER2- and HER2-positive diseases. This paper suggests that the utility of supraclavicular lymph node surgery in patients with ISLNM may be that it can accurately obtain supraclavicular pCR, which is of great significance for predicting the prognosis of patients.

We are grateful to Dr. Yizhou Jiang for his help with the preparation of the manuscript.

Ethical Statement: The study was carried out with the approval of the Ethical Review Committee of the Affiliated Cancer Hospital of Zhengzhou University. As this study was retrospectively designed, informed consent was waived by the Affiliated Cancer Hospital of Zhengzhou University. The authors are accountable for all aspects of the work in ensuring that questions related to the accuracy or integrity of any part of the work are appropriately investigated and resolved.