Suicide accounted for 1.4% of all deaths worldwide, making it one of leading cause of death in 2016 (1). Cancer patients in US have nearly twice the suicide rate of the general population (2). Researchers have demonstrated suicide risk factors of patients with one specific cancer, such as lung cancer, colorectal cancer, head and neck cancer and so on (3-7). It has been discovered that male sex, white race, and older age at diagnosis may be associated with higher risk of suicide among cancer patients (2).

Adolescents and young adults (AYA) are defined as people whose age is between 15 and 39 (8). In 2017, adolescents and young adults aged 15 to 24, 25 to 34, 35 to 44 had a suicide rate of 14.46, 17.53, 17.94 per 100,000 individuals in US respectively (9). About 70,000 adolescence and young adult (ages 15–39) are diagnosed with cancer each year in the United States, and cancer is the leading cause of disease-related death in the AYA population (8). Additionally, cancer incidence increased faster in AYAs than in younger or older population (10). Nowadays, AYA cancer patients lose advantage of prognosis compared to older cancer patients, and survival quality of AYA cancer patients should be focused on (11).

However, there is no comprehensive study to compare suicide issues between AYA group and all-age group in pan-cancer view. The purpose of this research is to analyze the necessity to separate AYA cancer patients as a special group to identify high risk patients.

Inclusion of patients with multiple primary cancers may have potential effect on suicidal behaviors which may lead to different result of high-risk population (5,14). To prevent the interference of multiple primary cancers, we extracted data of patients diagnosed with only one primary cancer of 20 kinds of solid carcinoma. Demographic and clinicopathological variables of interest encompassed sex, race, marital status, age at diagnosis, year of diagnosis, grade, stage, surgery, cause of death and survival time. Patients whose cause of death variable coded as “Suicide and self-inflicted injury” were identified. They were divided into 3 groups according to age at diagnosis (younger than 15 years, 15–39 years, and older than 40 years). We sorted patients by white, black and others, and categorized patients as married or unmarried. Year of diagnosis were allocated into 3 groups (before 1993, 1994–2003, after 2004). Surgery was classified as performed, not performed, and unknown. Disease stage for the analysis was coded based on the variable “SEER Historic Stage A”. We give a value of 0.5 months to those who didn’t survive for a full month after diagnosis, because SEER record their survival time in months (13). 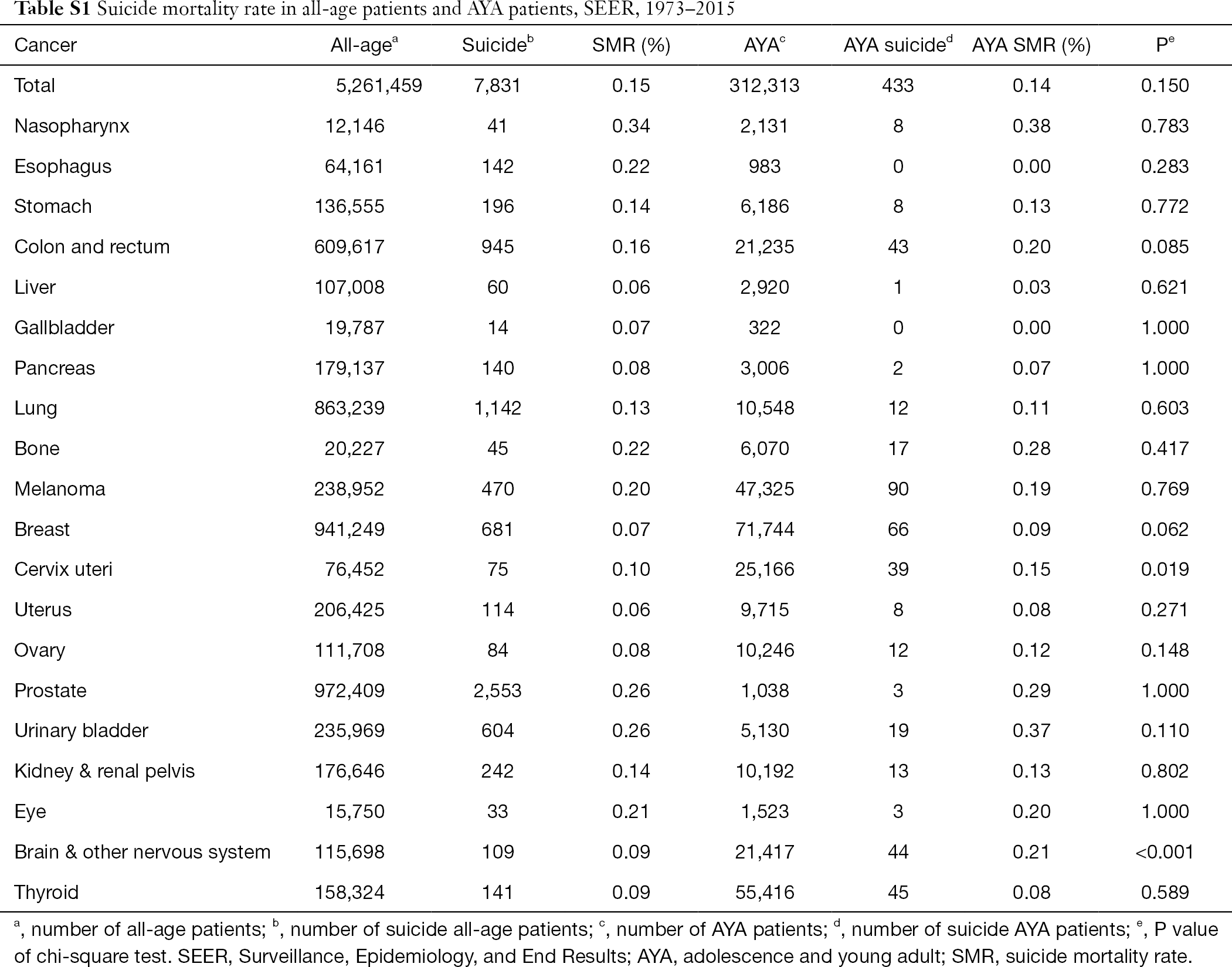 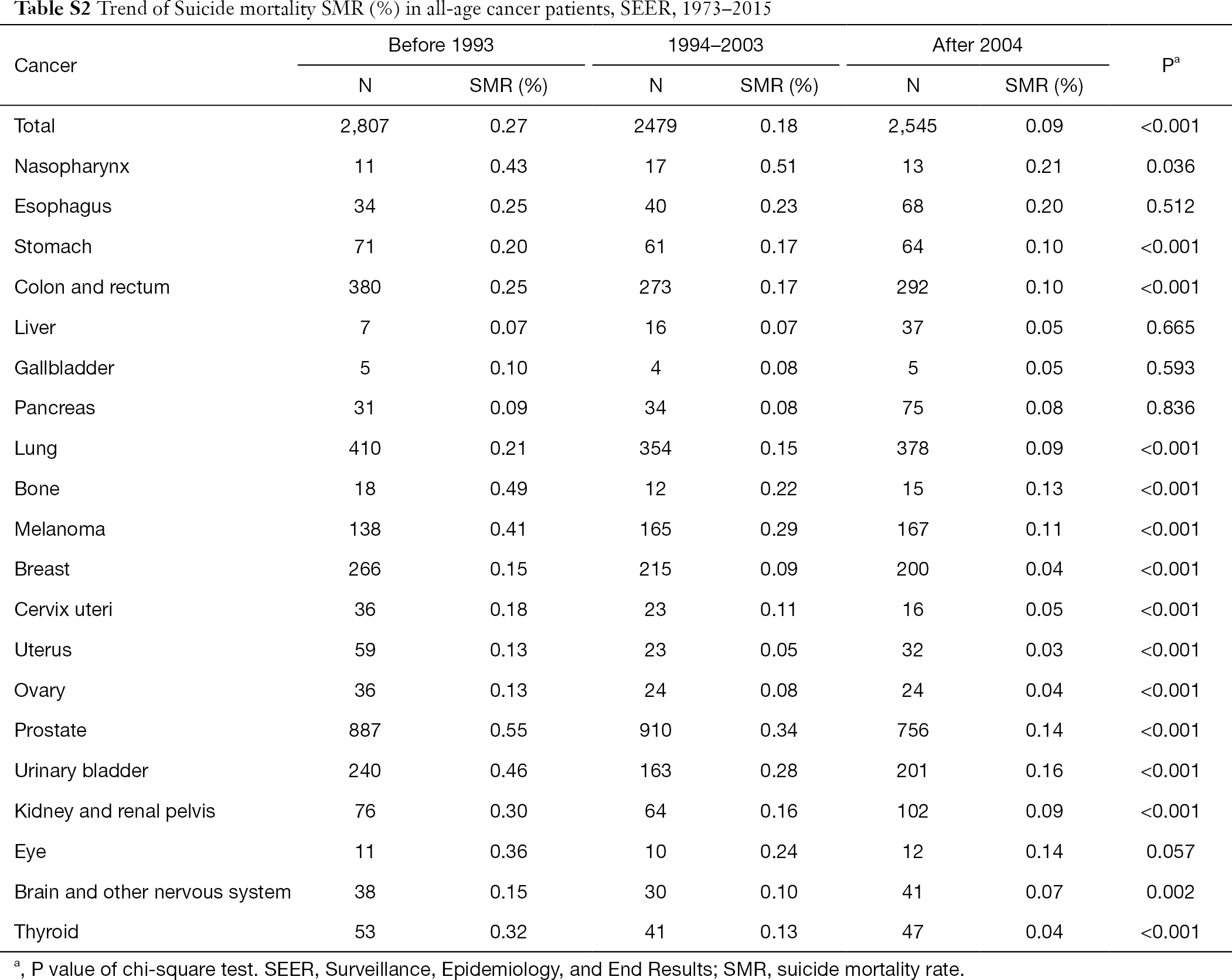 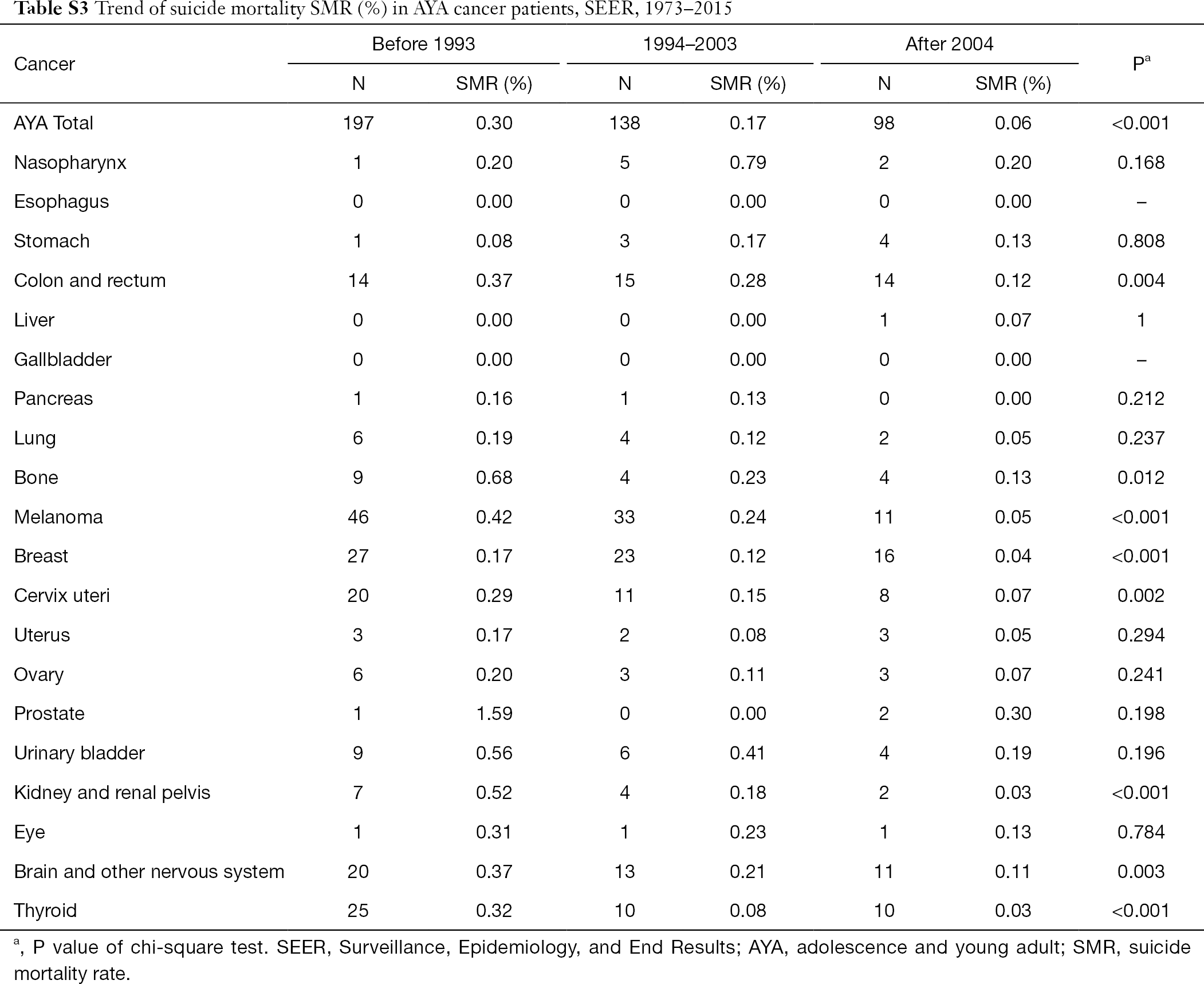 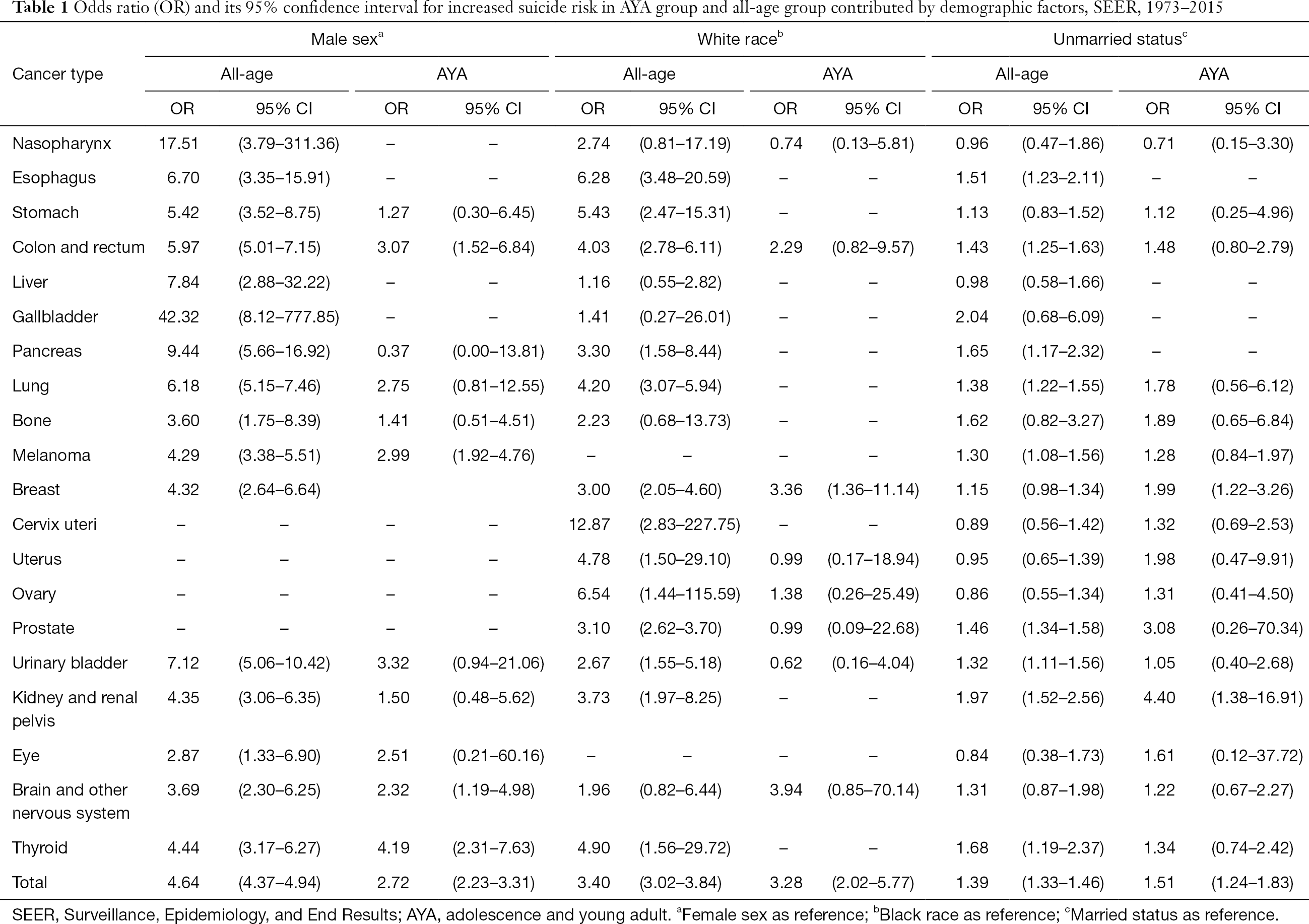 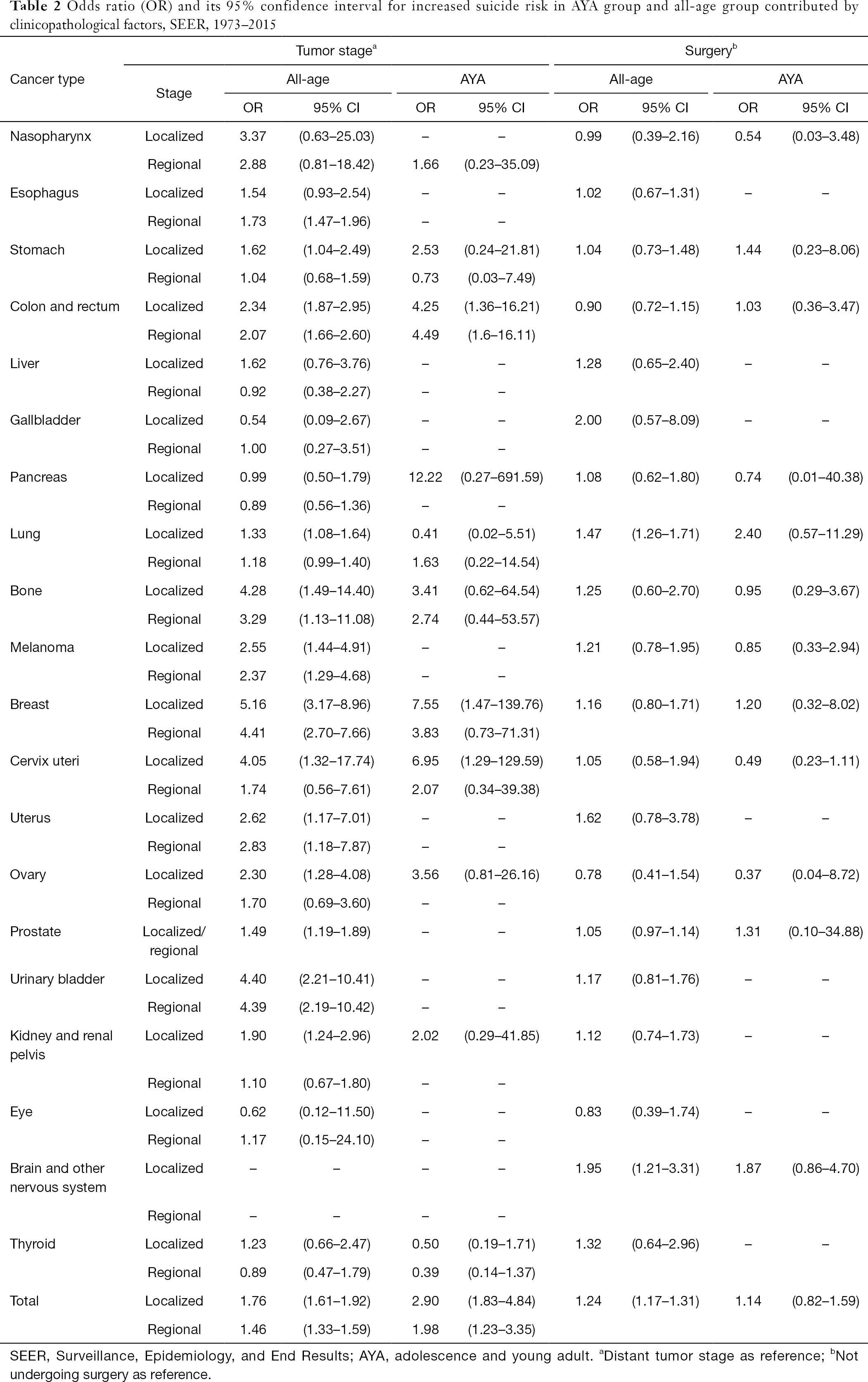 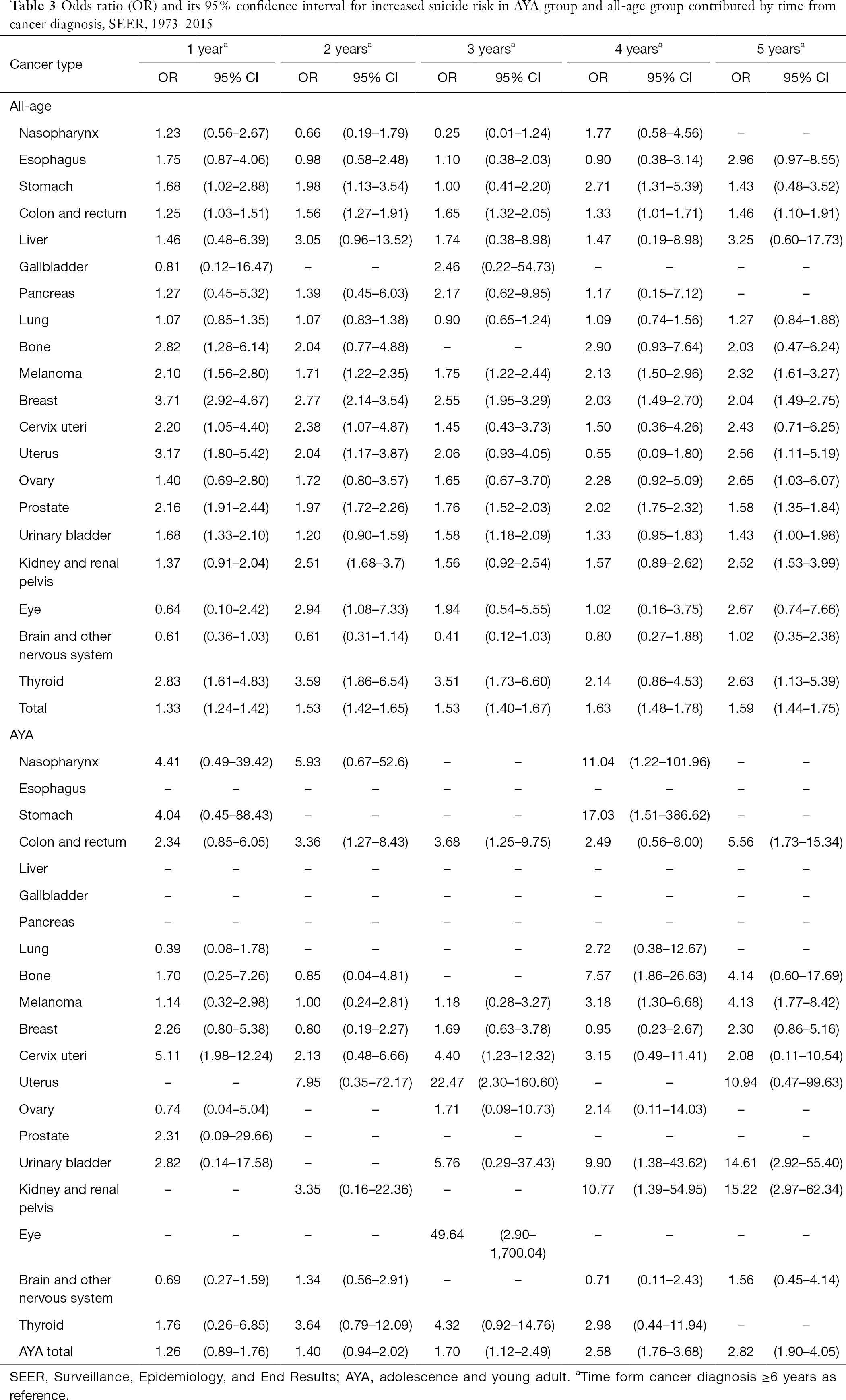 Our study observed that suicide rate of AYA cancer patients is marginally lower than all-age cancer patients. On one hand, AYA cancer patients may use internet more frequently than older patients or children (15,16). They may acquire more information about their cancer and psychological support from the Internet, which may enhance their confidence to fight against cancer and lower their ideal of suicide (15,17). On the other hand, AYA cancer patients may have need of fertility preservation, and it may provide AYA cancer patients the impetus to survive (18). According to the result, both AYA patients and all-age patients with nasopharynx cancer, prostate cancer and urinary bladder cancer have highest SMR. But former researches showed highest suicide rate occur in lung, stomach, and head and neck cancers patients, which is not completely consistent with our result (2). Also, the sites correlated with the greatest suicide rate vary depending on the report (3,19,20). The underlying reason is unknown, and it may be explained that nasopharynx cancer has a catastrophic impact on patients’ quality of life (21,22). Contrary to increasing suicide rate of US population, significant improvement in suicide prevention is observed both in AYA group and all-age group cancer patients (23). This result is consistent with previous studies (20,24). It may be explained by the improvement of prognosis of all-age cancer patients and AYA cancer patients due to development of advanced therapy such as targeted chemotherapy and immunotherapy (10,25-28).

Longer period from cancer diagnosis is associated with higher suicide risk of both all-age patient and AYA patients within 5 years from diagnosis. Previous study showed Austrian cancer patients is most likely to commit suicide within 1 year from diagnosis, which is different from our result (40). The different result may be explained by accumulated pain in treatment and poor quality of life in long-term survivors of cancer (41). When analyzed in specific cancer, breast cancer patients in all-age group have highest suicide risk in first year from cancer diagnosis, which is consistent with former research (7). In AYA group, cervical cancer patients have highest suicide risk in first year from cancer diagnosis. A possible reason is that cervical cancer may deprive fertility of AYA patients, leading to depression of AYA patients (42).

Our study still has some limitations. SEER is a database only contains information of US cancer patients, so our study has a weakness of research area, and research over the world is still needed. Suicide is a complicated phenomenon affected by many factors, but detailed information such as socioeconomic status and treatment details is not available in SEER database.

Ethical Statement: The authors are accountable for all aspects of the work in ensuring that questions related to the accuracy or integrity of any part of the work are appropriately investigated and resolved. Approval was waived by the local ethics committee, as SEER data is publicly available and de-identified. The study was exempted from Institutional Review Board approval, due to the use of a large cancer database with unidentifiable patient information.