Thoracic radiotherapy is widely used for the treatment of lung cancer. However, it can also cause different levels of radiation-induced lung injury in lung tissue adjacent to tumor. Radiation dose delivered to the tumor was therefore partly limited by the radiation-induced lung injury including the acute pulmonary inflammation and chronic pulmonary fibrosis, which seriously affect the quality of patients’ life, and in worst scenario, could even lead to death (1,2). At present, glucocorticoids, antibiotics, bronchodilators and immunosuppressive agents are commonly used to treat acute radiation-induced lung injury. However, these strategies have suboptimal effect with side effects that may adversely affect the quality of patients’ life (3,4).

The mechanism of radiation-induced pneumonitis has not been fully understood until recently. It is generally believed that radiation-induced pneumonitis is a multi-factorial process that involves target cell damage, reactive oxygen species activation, and cytokines generation. Therefore, inflammation-related protein and inflammatory cytokine, such as TGF-β1, TNF-α and IL-6 released by infiltrated inflammatory cells, might be effective targets whose inhibition could theoretically prevent radiation pneumonitis (5-7).

Ophiopogon japonicus (O. japonicas) is an evergreen perennial plant in the Liliaceae family, which has been used as a traditional Chinese medicine to treat various inflammatory diseases for thousands of years (8). It has been reported that O. japonicas has certain roles in inhibiting tumor growth and reducing toxicity of chemotherapy (9,10). This work aims to evaluate the protective effect of O. japonicas on radiation-induced pulmonary inflammation using an acute lung injury mouse model.

Preparation of lung tissues for histology

Left-lung tissues of irradiated mice were fixed in 10% formalin and then embedded in paraffin. For histological study, sections were stained with hematoxylin and eosin (HE) and immunohistochemical (IHC) stains.

Preparation of lung tissues for detection of hydroxyproline, MDA, MMP-2 and TIMP-2

The concentrations of hydroxyproline and MDA in the lung tissues were measured using the activity assay kit (Nanjing Jiancheng Bioengineering Institute, Nanjing, China). All of the procedures were conducted according to the instructions of the manufacturer. For detection of MMP-2 and TIMP-2, tissue sections were incubated with an anti-MMP-2 or anti-TIMP-2 primary antibody (1:100 dilution, Santa Cruz, Dallas, TX, USA) at 4 °C overnight. Slides were then incubated with secondary antibodies labeled with HRP (Abcam, Cambridge, UK) and were developed using 3, 3-diaminobenzidine tetrachloride (DAB; DAKO, Carpinteria, CA, USA). Integrated optical density (IOD) was measured by image analysis software (Image-Pro Plus; Media Cybernetics, MD, USA), and the positive area was compared with the total area for semi-quantitative analysis.

Preparation of plasma for detection of IL-6, TNF-α and TGF-β1

Mice blood samples were collected and then centrifuged at 1,500 rpm for 5 min. Plasma were then collected and prepared for testing IL-6, TNF-α and TGF-β1 concentrations by enzyme-linked immunosorbent assay (ELISA).

All the measurement data are expressed as the means ± standard error of mean (SEM). The t-test or one-way analysis of variance (ANOVA) was applied to analyze the differences between groups, using data statistics software SPSS 17.0. P<0.05 represents a significant difference. 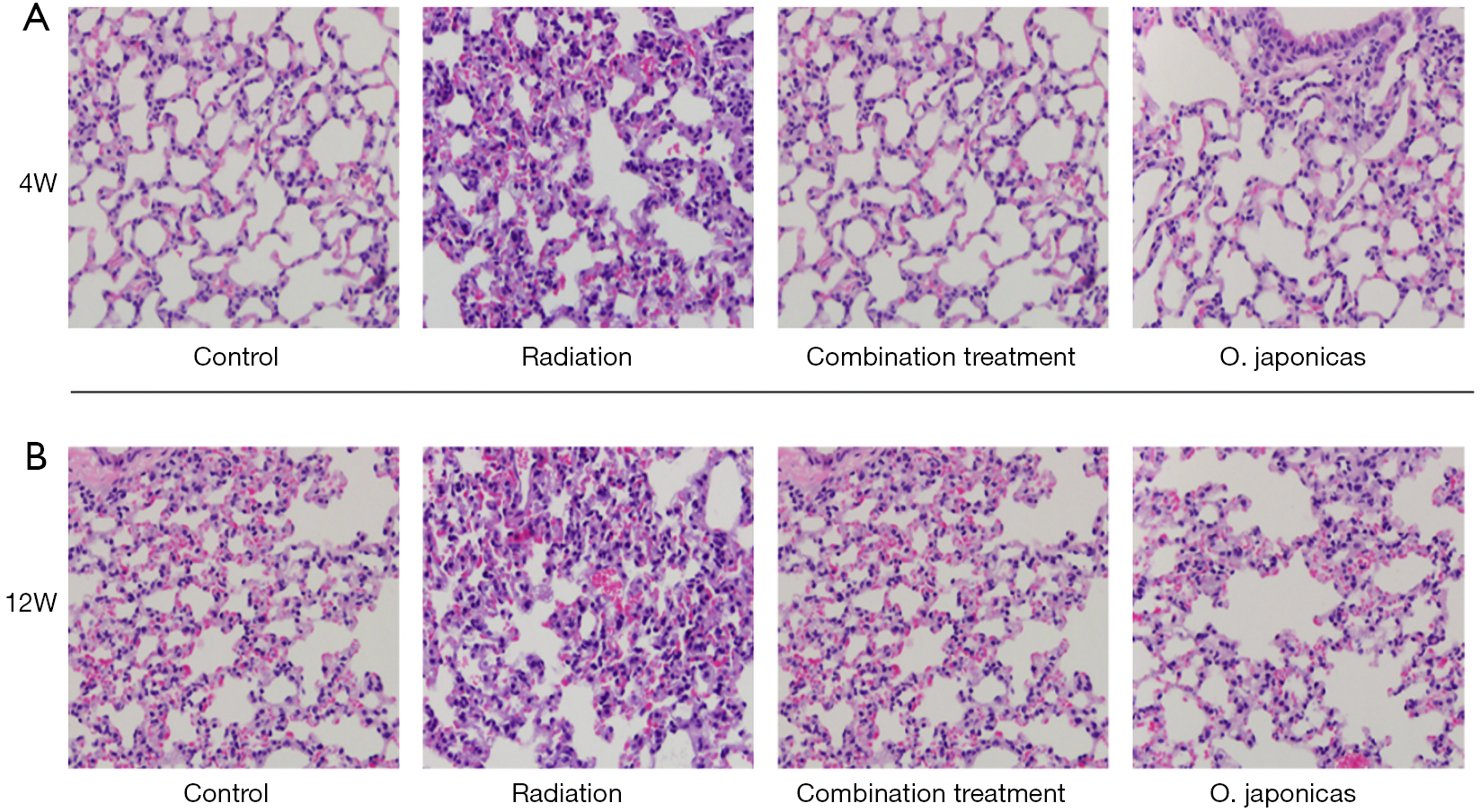 Effects of O. japonicus on inflammation-related protein expression in plasma

To understand the underlying mechanism, we compared the inflammation-related protein expression in mice plasma after radiation with or without treatment of O. japonicas or dexamethasone-cephalexin. Expression of inflammation-related cytokines (IL-6, TNF-α and TGF-β1) was significantly increased in irradiated mice plasma. Treatment with O. japonicas or dexamethasone-cephalexin depressed the increasing expression of IL-6, TNF-α and TGF-β1 at 4 weeks after irradiation. Importantly, compared to the combination treatment, treatment with O. japonicas resulted in a much enduring inhibition in the up-regulation of cytokines at 12 weeks after irradiation (Figure 2).

To study the effect of O. japonicas on radiation-induced inflammation-related protein expression in lung tissue, we compared the inflammation-related protein expression of lung tissue after radiation with or without treatment of O. japonicas or dexamethasone-cephalexin. Expression of inflammation-related protein (hydroxyproline, MDA, MMP-2 and TIMP-2) was significantly increased in irradiated mice lung tissue. Treatment with O. japonicas or dexamethasone-cephalexin could both inhibit the up-regulation of hydroxyproline, MDA, MMP-2 and TIMP-2 at 4 weeks after irradiation (Figure 3). Notably, compared to combination treatment, O. japonicas achieved a more sustained inhibition of hydroxyproline and MDA expression when detected at 12 weeks after irradiation (Figure 3A,B). Its effect on MMP-2 and TMP-2 was similar to the combination treatment. 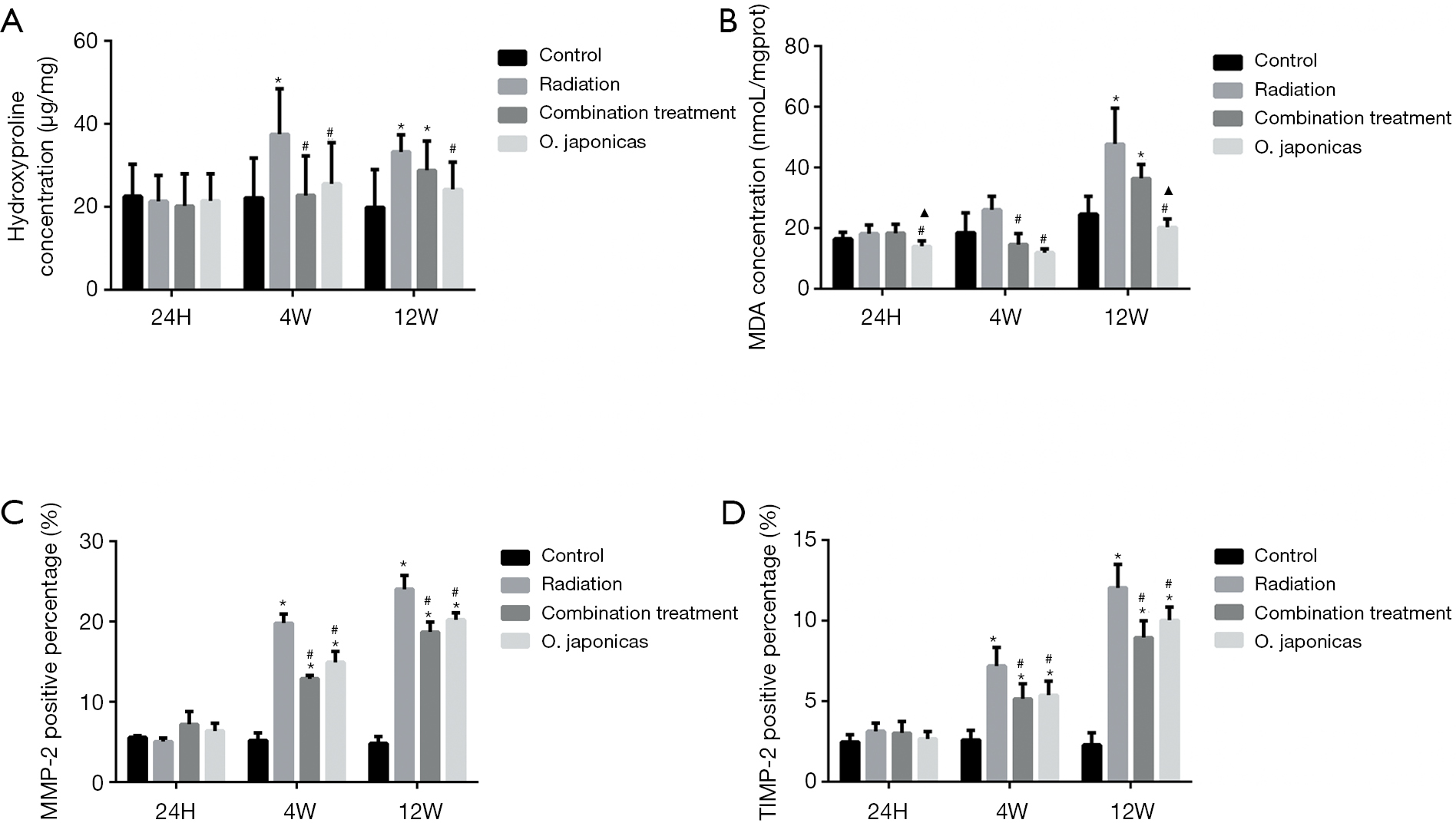 Radiation-induced lung injury is a major obstacle in thoracic radiotherapy. Current approach to prevent and treat such injury has been focused on certain key factors, such as the recombinant human keratinocyte growth factor (rHuKGF), which can promote the proliferation and differentiation of type II epithelial cell of the lung (12); or free radical scavengers, which can increase the free radical content of lung tissue after radiotherapy; as well as agents which are capable of inhibiting TGF-β1 and its relevant signal transduction proteins (2). However, it is now clear that radiation-induced lung injury is not a simple pathologic process driven by a single factor but rather a cascade effect of a network of cells and cytokines in the lung tissue.In this study, we constructed a model of acute radiation pneumonia in mice. We found that the lung tissue of irradiated mice showed acute pulmonary inflammation changes at 4 weeks after irradiation, which manifested as accumulation of neutrophils in alveolar spaces and capillary congestion. At 12 weeks after irradiation, histopathological examination showed altered pulmonary interstitium, reduced alveolar space, increased cellulose exudation, as well as migration of macrophages and fibroblasts into the alveolar space. We also found that the concentration of plasma IL-6, TNF-α, TGF-β1 and the expression of hydroxyproline, MDA, MMP-2, TIMP-2 protein in lung tissue were all increased.Cytokine-mediated multi-cell interactions are involved in the development of radiation-induced pulmonary inflammation. Studies have shown that radiation promotes lung alveolar epithelial cells, fibroblasts, alveolar macrophages and vascular endothelial cells to synthesize and secrete large amounts of cytokines, including those involved in local injury and inflammatory response (such as TNF-α, IL-1, IL-6, IL-8, etc.) and factors involved in tissue repair and organ fibrosis (such as TGF-β1) (13). Rübe et al. have shown that bronchial epithelial cells could release proinflammatory cytokines, TNF-α, IL-1, and IL-6, after 1 hour of pulmonary irradiation, which initiated and maintained intratracheal inflammation in radiation-induced lung injury (14). Anscher et al. found that TGF-β1 and its mRNA expression were up-regulated in the pulmonary fibrosis model, indicating that TGF-β1 has the function of promoting collagen production and deposition (15). They also measured changes in plasma TGF-β1 level in patients with lung cancer before, during, and after radiotherapy, and found that plasma TGF-β1 level was increased at the end of radiotherapy in patients with radiation-induced pneumonia (16). Our study found that the levels of IL-6, TNF-α and TGF-β1 in plasma of the mice in radiation group were higher than those in the control group, indicating that our model recapitulated some key features of radiation-induced pulmonary inflammation. Treatment with O. japonicas or dexamethasone-cephalexin inhibited the up-regulation of IL-6, TNF-α and TGF-β1 at 4 weeks after irradiation. Interestingly, we also found that compared to the combination treatment, O. japonicas could achieve a more sustained suppression of those inflammatory cytokines at 12 weeks after irradiation, which suggested that the protective effect of O. japonicus could be more enduring than dexamethasone in combination with cephalexin.Hydroxyproline is an important component of collagen which correlates to the severity of the lung fibrosis (17), and MDA is an important lipid peroxide that reflects the damage caused by oxygen free radical (18). Our results showed that the content of hydroxyproline and MDA in lung tissue in the radiation group was significantly higher than that in the control group. Treatment with O. japonicas or dexamethasone -cephalexin suppressed the up-regulation of hydroxyproline and MDA in lung tissue at 4 weeks after irradiation. In addition, O. japonicas was found having more sustained suppression in hydroxyproline and MDA when compared to the combination treatment at 12 weeks after irradiation.Some studies have shown the levels of MMPs are elevated in the BALF from COPD patients (19,20), high expression of both MMP and TIMP have been found in sputum from chronic bronchitis which are correlated with impaired lung function (21). Our results showed that the expression of MMP-2 and TIMP-2 in lung tissue in the radiation group was significantly higher than that in the control group. Treatment with O. japonicas or dexamethasone-cephalexin both inhibited the up-regulation of MMP-2 and TIMP-2 in lung tissue at 4 and 12 weeks after irradiation.In conclusion, treatment with O. japonicas or dexamethasone-cephalexin could both significantly attenuate the lung inflammatory response to radiation through reducing the expression of plasma proinflammatory cytokines IL-6, TNF-α and fibrosis promoting cytokine TGF-β1. Treatment with O. japonicas or dexamethasone-cephalexin could also inhibit the up-regulation of hydroxyproline and MDA, as well as MMP-2 and TIMP-2 in lung tissue. What's more, the protective effect of O. japonicas was found more enduring than dexamethasone combined with cephalexin. These results suggested that O. japonicas may be a novel therapeutic strategy for radiation-induced pulmonary inflammation.

Ethical Statement: The authors are accountable for all aspects of the work in ensuring that questions related to the accuracy or integrity of any part of the work are appropriately investigated and resolved. This study was supported by the Fuzhou General Hospital (No. IACUC-2014-0010).