Decreased expression of EFCC1 and its prognostic value in lung adenocarcinoma

Lung cancer is the most common cancer and the leading cause of cancer-related deaths worldwide (1). Lung adenocarcinoma (ADC), with increasing tendency annually, becomes the most frequent pathological subtype of lung cancer (2). Although the development of early diagnosis and introduction of targeted therapies have improved clinical outcomes of lung ADC, patients at advanced stages still have a high mortality rate (1). The tumor-node-metastasis (TNM) classification is the most important prognostic factor for lung ADC. Nevertheless, patients with the same TNM stage often have different clinical outcomes (3). Serum biomarkers which are routinely assessed in clinical practice, including carcinoembryonic antigen, cytokeratin 125, and neuro-specific enolase, have limited efficiency for prognostic evaluation (4). Therefore, it is necessary to identify novel biomarkers with clinicopathological significance and prognostic value for lung ADC.

During the past decade, the next-generation sequencing (NGS) technology has led a revolution in molecular biology and provided new insights into cancer research. Significant genetic and molecular events can be identified from NGS data through bioinformatic analysis (5). The Cancer Genome Atlas (TCGA) database has abundant genomic and clinicopathological data of various cancers. Initially, we identified genes which displayed consistent expression changes with the progression of lung ADC in TCGA data through bioinformatics analysis. Among the top ten upregulated and downregulated genes, the vast majority-such as B3GNT3, NME1, SMAD6, SPN, SRPK1and TUBB3-have been related to carcinogenesis, progression, or prognosis of lung cancer (6-12). However, the relationship between EF-hand and coiled-coil domain containing 1 (EFCC1) and lung cancer has not been reported.

EFCC1, a member of coiled-coil domain-containing (CCDC) family, is also termed coiled-coil domain containing 48 (CCDC48). Up to date, its expression patterns and bio-functions are still unclear. Previous studies have reported that CCDC family members CCDC6, CCDC8, CCDC88A, and CCDC67 were involved in the progression and have been closely related to the prognosis of lung cancer and other cancers (13-16). Based on the consistent downregulation trend of EFCC1 with the progression of lung ADC revealed by the bioinformatic analysis in TCGA data, we hypothesized that the expression of EFCC1 might also be related to the prognosis in lung ADC patients.

In this study, we first analyzed EFCC1 expression and its prognostic value in lung ADC in TCGA data. Then, both mRNA and protein expression levels of EFCC1 were validated in five clinical lung ADC and matched adjacent non-tumor tissue samples. Finally, the association of EFCC1 expression with clinicopathological characteristics and overall survival (OS) in lung ADC patients was further investigated in 130 clinical lung ADC samples with tissue microarray (TMA).

Matched genome and RNA sequencing data, DNA methylation data, and clinical data of 533 lung ADC patients were downloaded from TCGA Data Portal (https://cancergenome.nih.gov/). The mRNA expression level was expressed as log2-transformation of transcripts per million (TPM) +1. The DNA methylation level was expressed as a mean beta value. Data of 488 patients with survival information were used for survival analysis.

Bioinformatic analysis was performed using R software. Differences between groups were compared by the Wilcoxon rank-sum test. For survival analysis, a Cox proportional hazards model was used to determine whether the expression of EFCC1 was associated with OS. The survival curves were constructed according to the Kaplan-Meier method and compared with the log-rank test. P<0.05 was considered statistically significant.

To identify genes that displayed consistent expression changes during cancer progression, we performed differential expression analysis for normal and early-stage (stage 0–II) samples (group 1), and early-stage and advanced-stage (stage III–IV) samples (group 2) using edgeR (17). The significant common genes (at the threshold of P<0.05 in both groups, q<0.05 in at least one group) with the same expression trend were considered for further analysis. And the top ten upregulated and downregulated genes (ordered by the P values in group 1) were shown by heatmap.

Fresh-frozen and paraffin-embedded lung ADC tissues with their matched adjacent non-tumor tissues of five patients were obtained from the Department of Thoracic Surgery, West China Hospital, Sichuan University from August 3, 2018, to August 14, 2018. The written informed consent of using biological samples and clinical data for scientific research was obtained from each patient. Fresh-frozen tissues were used for qPCR and Western blot, and paraffin-embedded tissue was used for immunohistochemistry (IHC) analysis.

The fresh-frozen tissues were lysed with RIPA buffer (Solarbio, Beijing, China) in the presence of protease inhibitor PMSF (Solarbio, Beijing, China). Protein concentration was measured by BCA protein assay kit (Solarbio, Beijing, China). An equal amount of proteins (30 µg) were separated on 10% SDS-polyacrylamide gels and transferred to polyvinylidene fluoride membranes (Merck Millipore, Cork, IRL). Then the membrane was blocked with defatted milk at room temperature for 1 hour and incubated with anti-EFCC1 rabbit polyclonal antibody (1:250; Abcam, #ab151108) at 4 °C overnight. After that, the membrane was incubated with fluorescence-labeled anti-rabbit IgG antibody (1:5,000; Li-Cor, #926-32211) at room temperature for 1 hour and then visualized using ODYSSEY CLX fluorescence developing system (Li-Cor, Lincoln, NE, USA). An anti-β-actin mouse monoclonal antibody was used as the loading control.

Statistical analysis was performed using the SPSS 22.0 software (SPSS Inc., Chicago, IL, USA) and GraphPad Prism 6 software (GraphPad Inc., La Jolla, CA, USA). The difference in EFCC1 expression between lung ADC and matched adjacent non-tumor tissues was compared using Student’s t-test. The relationship between EFCC1 and clinicopathological variables was analyzed by the Pearson chi-square test. The survival curve was constructed with the Kaplan-Meier method, and the significance of difference was examined by the log-rank test. The Cox proportional hazards regression model was used for univariate and multivariate analyses. The hazard ratio (HR) and 95% confidence interval (CI) was calculated to estimate the hazard risk of variables. P<0.05 was considered statistically significant. 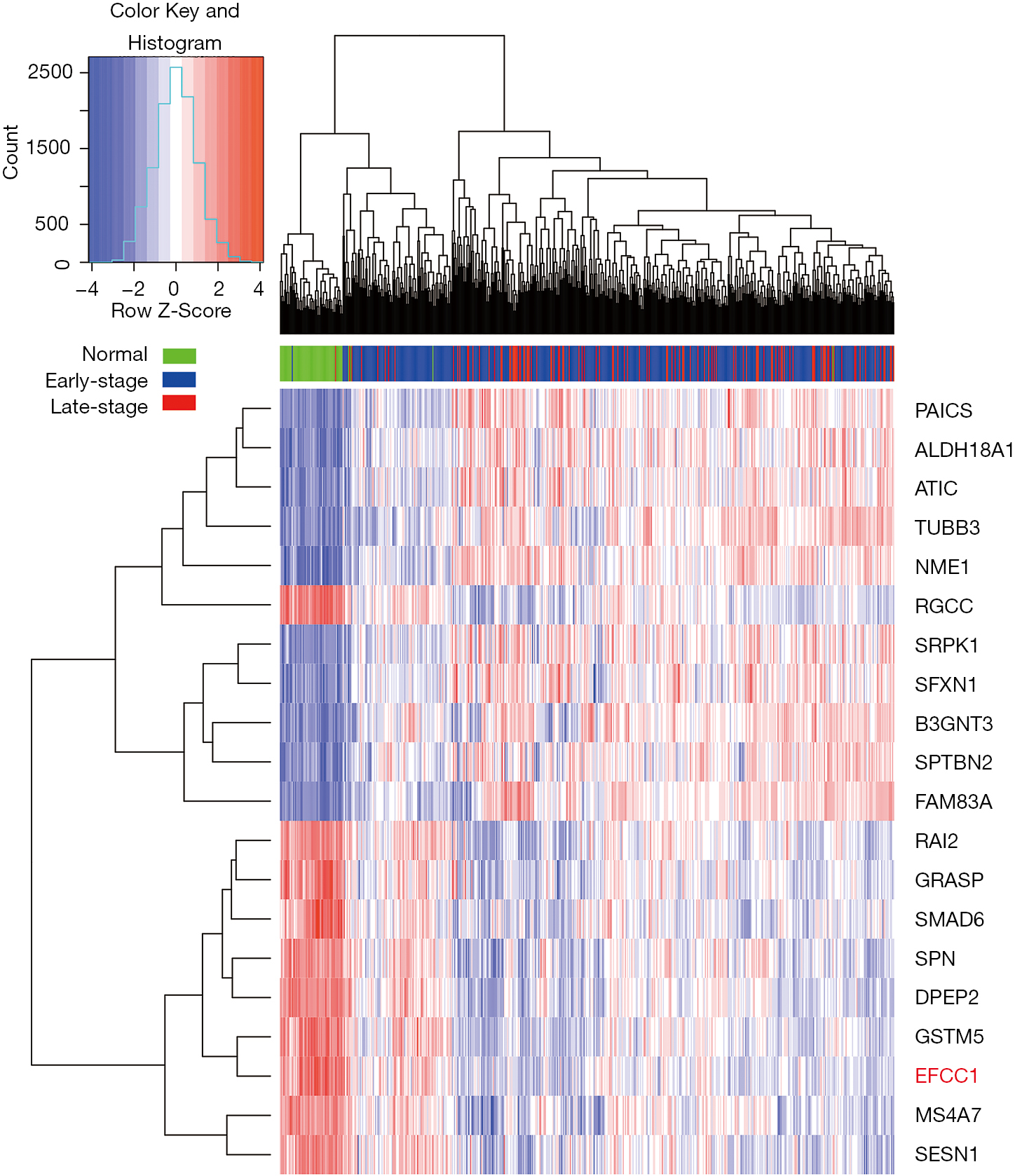 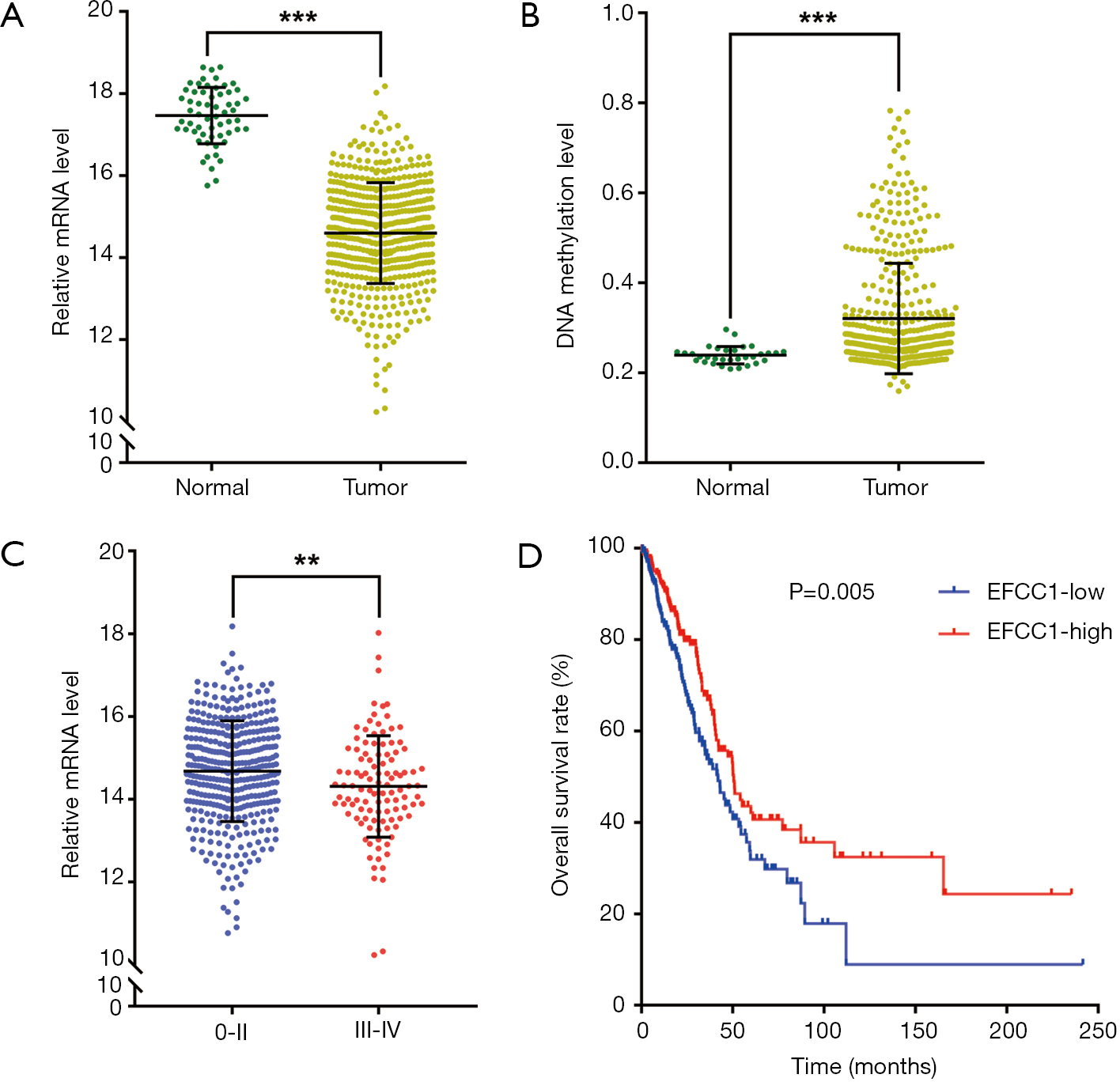 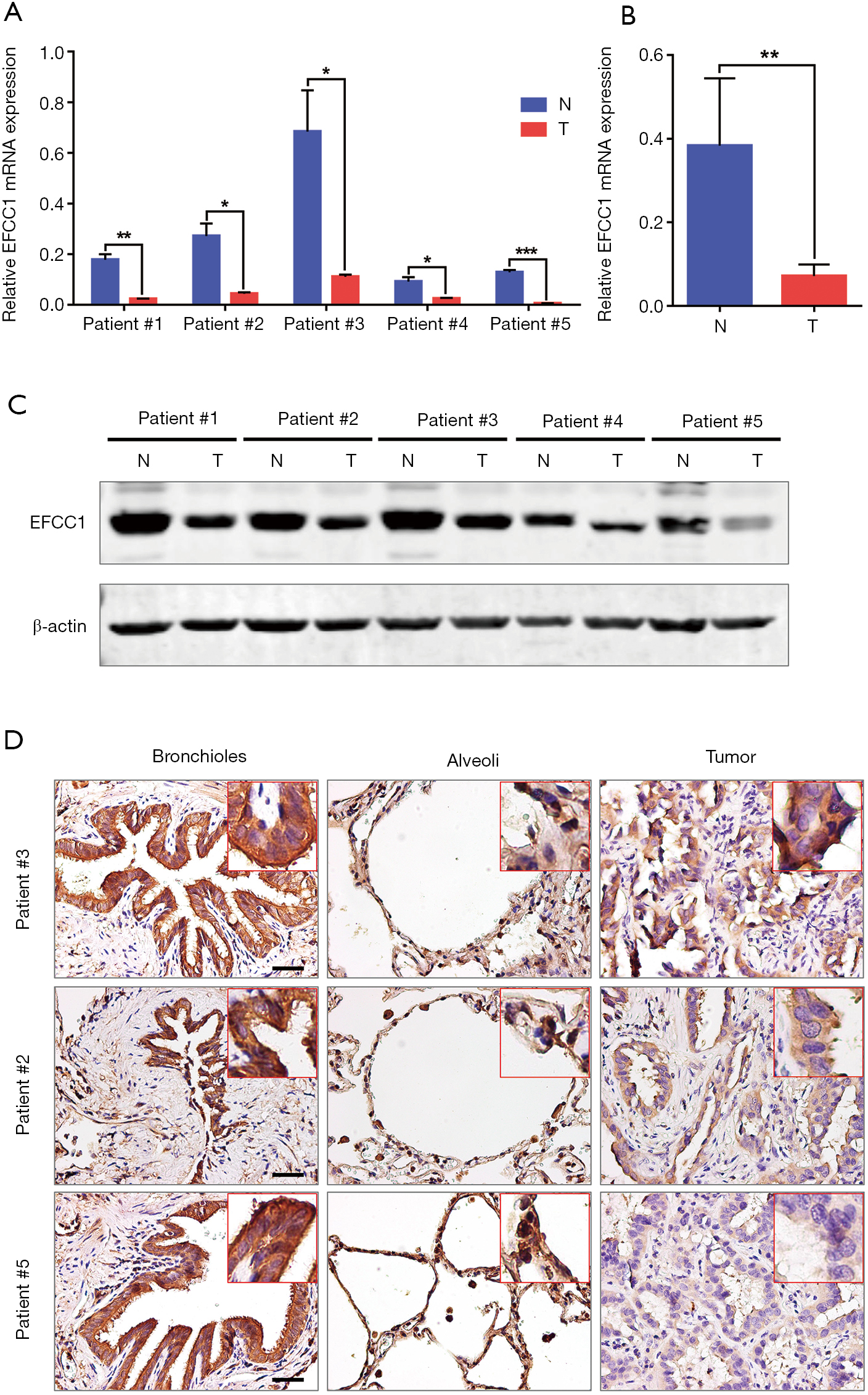 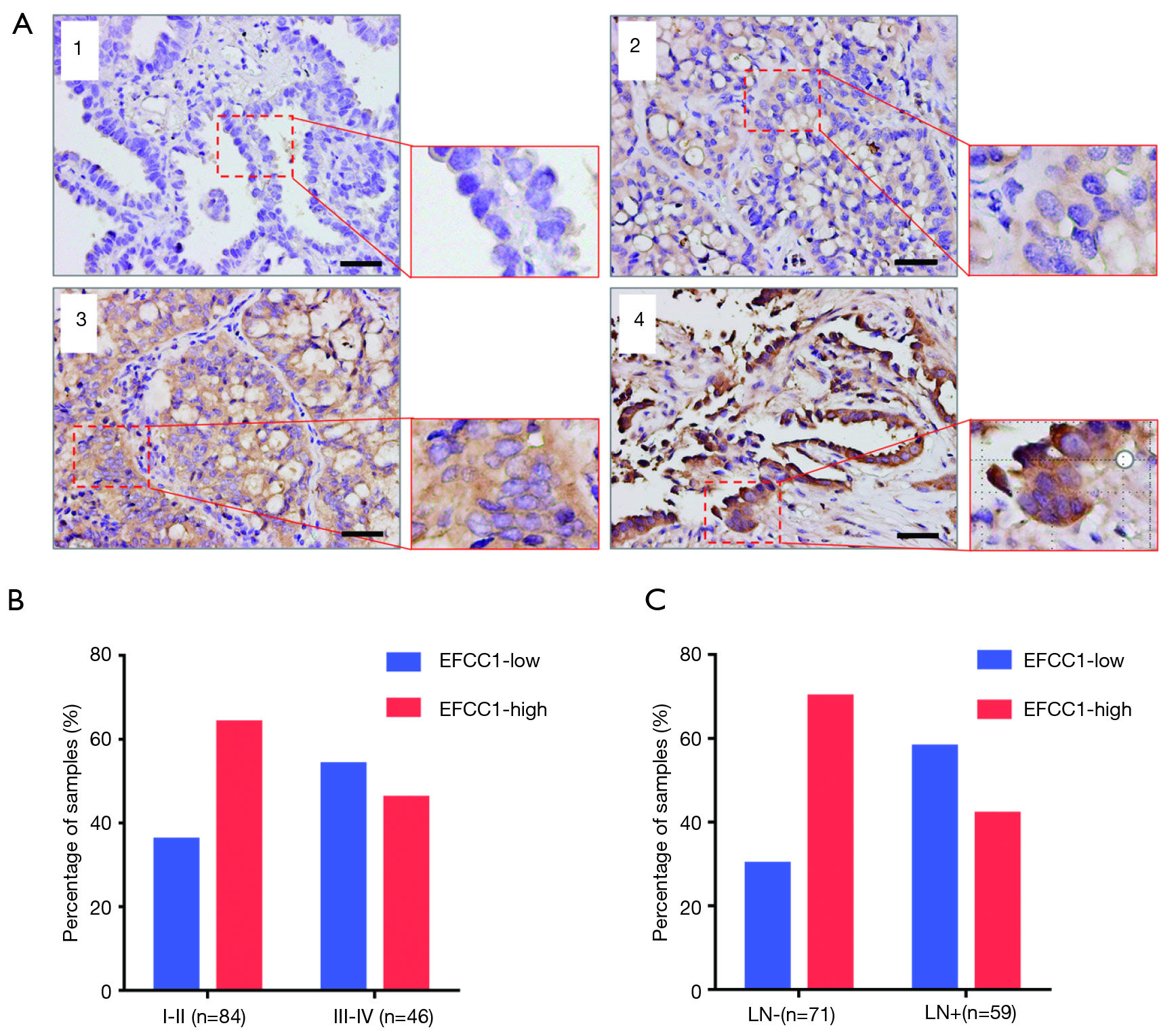 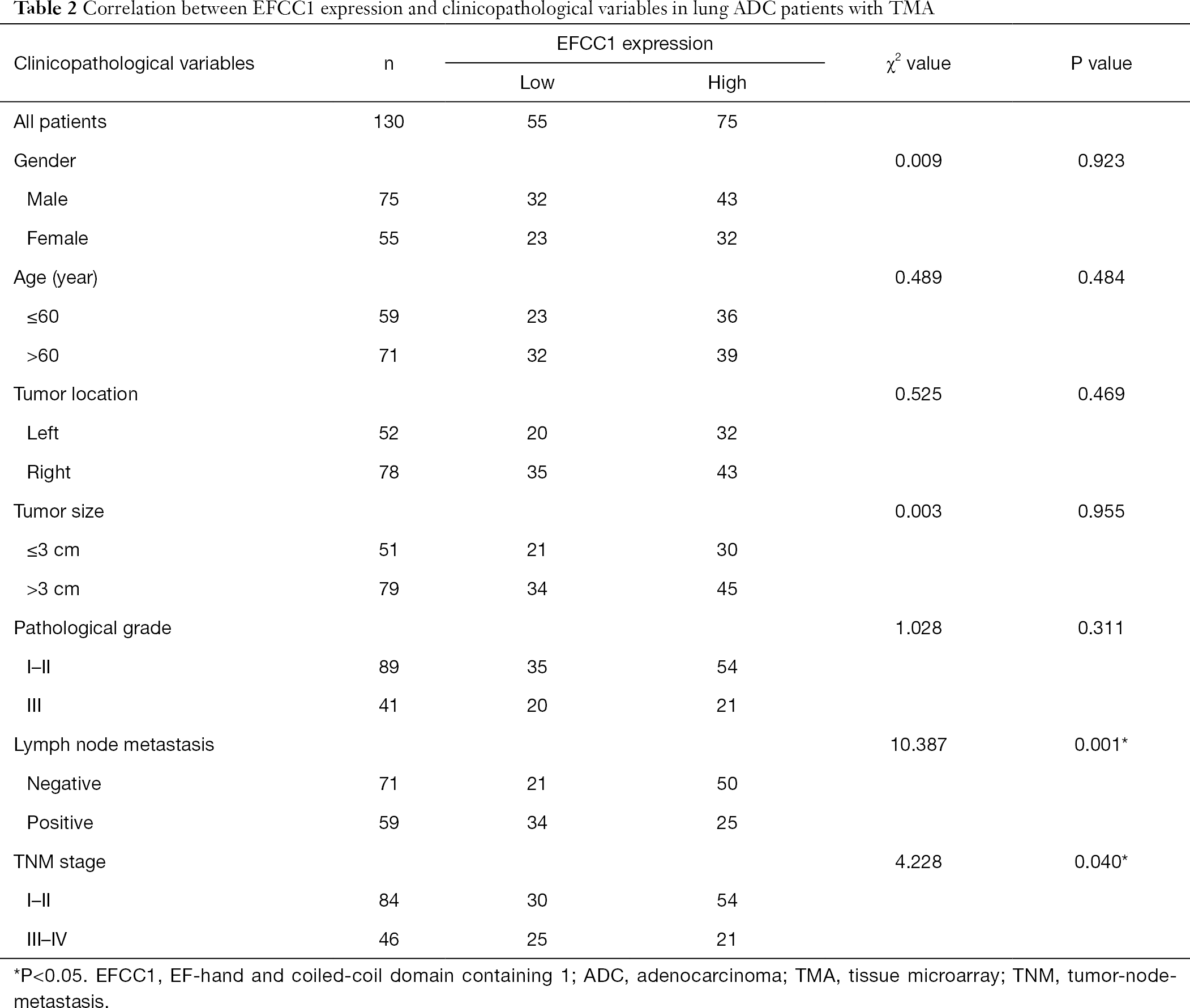 Based on immunoreactivity scores of EFCC1 in clinical lung ADC samples with TMA, we further investigated the correlation between EFCC1 expression and survival in lung ADC patients. The Kaplan-Meier survival curve with log-rank test showed that patients with low EFCC1 expression had shorter OS time than those with high EFCC1 expression (P=0.001) (Figure 5). 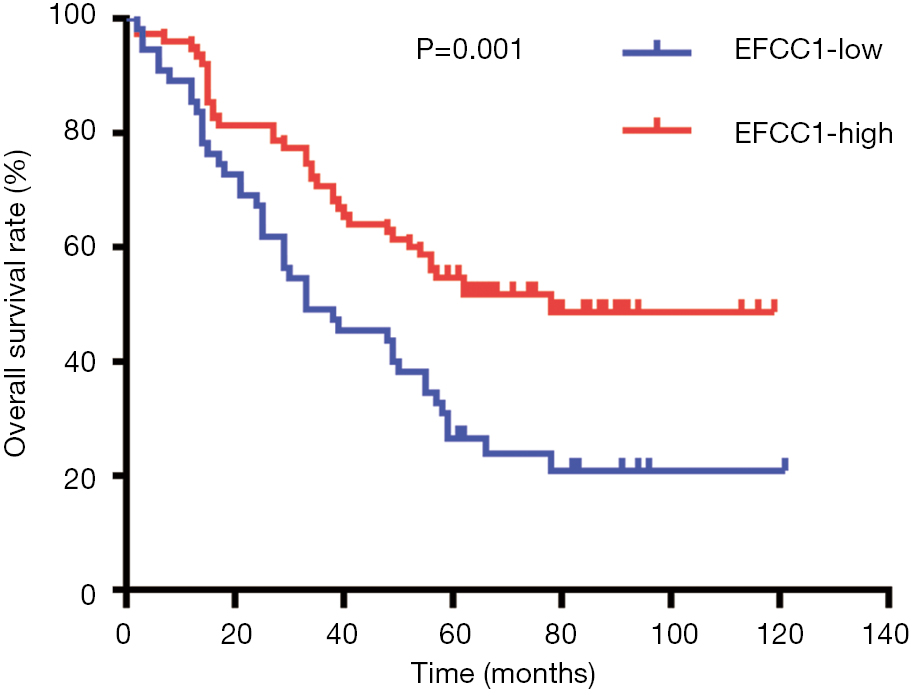 CCDC family is a group of genes coding coiled-coil domain-containing proteins, and more than 140 CCDC family members have been identified so far (16,19). Owing to the highly versatile folding motif, CCDC genes exhibit diverse functions (16). Previous studies have revealed that some CCDC genes were related to human diseases, including mitochondrial disease, diabetes, and other metabolic diseases, epigenetic disease, and cancers (16,20-23). Among cancer-related CCDC family members, some are upregulated and exhibit tumor-promoting functions, such as CCDC88A in pancreatic cancer, CCDC178 in hepatocellular carcinoma, and CCDC34 in bladder cancer and colorectal cancer (15,24-26). Some others are downregulated and exhibit tumor-suppressive activities, including CCDC6 and CCDC8 in lung cancer, and CCDC67 in gastric cancer (13,14,16). However, the functions and clinical significance of more than 60% of CCDC members, including EFCC1, remain unknown. Through differential expression analysis for RNA sequencing data in the TCGA database, we found that EFCC1 was included in genes which were significantly downregulated during lung ADC progression. This result prompts us to investigate the expression patterns and clinical significance of EFCC1 in lung ADC.

As the first study toward EFCC1, we initially analyzed EFCC1 expression and its clinical significance in TCGA data and then validated these results in clinical lung ADC samples to make reliable conclusions. In TCGA data, EFCC1 mRNA was lower in lung ADC samples than in normal lung samples. Likewise, both mRNA and protein of EFCC1 were significantly downregulated in lung ADC compared with their adjacent non-tumor counterparts in clinical tissue samples. Furthermore, EFCC1 mRNA was decreased form early-stage to advanced-stage lung ADC in the TCGA database. And low EFCC1 protein expression was associated with positive lymph node metastasis and advanced stages of lung ADC in clinical samples with TMA. All these results indicated that EFCC1 might be involved in carcinogenesis and progression of lung ADC, and EFCC1 expression level can be used to predict lymph node metastasis status and TNM stages for lung ADC patients. Also, we found that the methylation level of EFCC1 DNA was significantly higher in lung ADC samples than in normal lung samples in TCGA data. Since DNA methylation is considered a key mechanism for silencing of tumor suppressor genes in various cancers (27,28), our finding suggested that downregulation of EFCC1 in lung ADC may result from aberrant DNA methylation.

In survival analyses, the Kaplan-Meier survival curve with log-rank test showed that low EFCC1 expression was significantly associated with poor OS in lung ADC patients in both TCGA data and clinical samples. More importantly, multivariable Cox regression analysis further demonstrated that EFCC1 expression level was an independent prognostic factor for lung ADC in both sets of data. Despite specific mechanisms and involved signal pathways of EFCC1 in lung ADC need further investigations, our findings suggested that EFCC1 expression level can be served as an independent survival marker for lung ADC patients.

There are numerous genomic alterations accumulated during the pathological processes of cancers, some of them have been identified as oncogenic drivers, including KRAS, P53, PTEN, EGFR, BRAF, and ERBB2 mutation, and ALK, ROS1 and RET rearrangement (29,30). Those oncogenic drivers are important biomarkers and therapeutic targets for cancers (30). However, some other genes without mutation or rearrangement, which are only significantly upregulated or downregulated during the development of cancers, may not be the oncogenic drivers. In our study, we demonstrated these genes, such as EFCC1, could also serve as biomarkers for cancers.

Ethical Statement: The authors are accountable for all aspects of the work in ensuring that questions related to the accuracy or integrity of any part of the work are appropriately investigated and resolved. This study was approved by the ethics committee of West China Hospital, Sichuan University (No. 2018-599).