Sugammadex in the management of myasthenic patients undergoing surgery: beyond expectations

Myasthenia gravis is an autoimmune disease characterized by antibodies that bind to acetylcholine receptors or functionally related molecules in the postsynaptic membrane of the neuromuscular junction. These antibodies induce skeletal muscle weakness that can be generalized or localized, is typically more severe in proximal muscles, and nearly always involves the eye, producing diplopia and ptosis. Muscle weakness improves with rest and worsens with activity (1). Myasthenia gravis is the most common primary disease of the neuromuscular junction, with an annual incidence of approximately 8 to 10 cases per 1 million persons and a prevalence of 150 to 250 cases per 1 million people (1). Acetylcholinesterase inhibitors, with or without concurrent immunosuppressive therapy, represent first-line treatment for the disease. Thymectomy should be considered in patients with a thymoma and myasthenia gravis (1).

Anesthetic drugs may contribute to the development of a perioperative myasthenic crisis (2). Neuromuscular-blocking agents (NMBAs) are especially problematic, as patients with myasthenia gravis are particularly sensitive to these drugs (1,2). The anesthetic approach is often modified to avoid or limit the use of NMBAs in these patients. Gritti and colleagues reported that increasing the percentage of patients receiving general (propofol, sevoflurane or desflurane) anesthesia without NMBA from 67% to 94% increased the rate of patients transferred to the surgical ward after surgery from 26.0% to 93.2%, significantly reducing intensive care unit (ICU) admission rates (5). Similarly, Fujita and colleagues reported that thymectomy was successfully performed in 90.9% of patients receiving combined general (sevoflurane) and epidural anesthesia without NMBAs, and the percentage of patients not extubated in the operating room because of respiratory depression or other reasons was lower in patients who did not receive NMBAs (28.3%) than in those who received NMBAs (50%) (6). In a study of 122 thymectomies performed under combined general (sevoflurane) and epidural anesthesia without NMBAs, Watanabe and colleagues reported that 11.5% of patients developed a postoperative myasthenic crisis, requiring reintubation after failed extubation and/or prolonged ventilator support for more than 48 hours postoperatively (7). Thus, anesthesia per se can trigger factor a myasthenic crisis, but the risk of a crisis is clearly increased with the use of NMBAs (1-7). Although avoidance of NMBAs is recommended, this is not always possible (5-7); NMBAs are particularly advised for laparoscopic surgery (2).

Sugammadex has changed the management of intraoperative neuromuscular blockade (NMB) in patients with myasthenia gravis (2). Sugammadex is a modified γ-cyclodextrin that reverses the effects of steroidal NMBAs. It is most commonly used for rocuronium reversal at the end of surgery. After intravenous injection, sugammadex initially acts by encapsulating and inactivating unbound rocuronium circulating in the plasma to form tight 1:1 complexes that are excreted in the urine. Secondly, sugammadex promotes the dissociation of rocuronium from neuromuscular junctions by creating a concentration gradient from the neuromuscular junction to the plasma, where it is subsequently encapsulated, inactivated, and excreted. Sugammadex does not affect the release or breakdown of acetylcholine, and it does not interfere with the morphology or physiology of the neuromuscular junction. So, when used for reversing NMB, sugammadex is not accompanied by the risk of triggering a cholinergic crisis, which may occur with cholinesterase inhibitors. Several case reports and series have described the potential benefits of a rocuronium-sugammadex strategy for neuromuscular block management in myasthenic patients undergoing intravenous or inhalational general anesthesia (Table 1) (8-25). In the majority of reports, use of sugammadex was associated with fast, complete reversal of rocuronium-induced NMB, as well as successful extubation at the end of surgery and no postoperative complications (8-25). The few reported cases of incomplete recovery [train-of-four (TOF) ratio <0.9 during neuromuscular function monitoring] after sugammadex and concomitant muscle weakness (14,15,17,25) were successfully managed after administration of acetylcholinesterase inhibitors (15,17,25). However, there is a paucity of studies comparing the effects of sugammadex versus acetylcholinesterase inhibitors on perioperative outcomes of patients with myasthenia gravis. 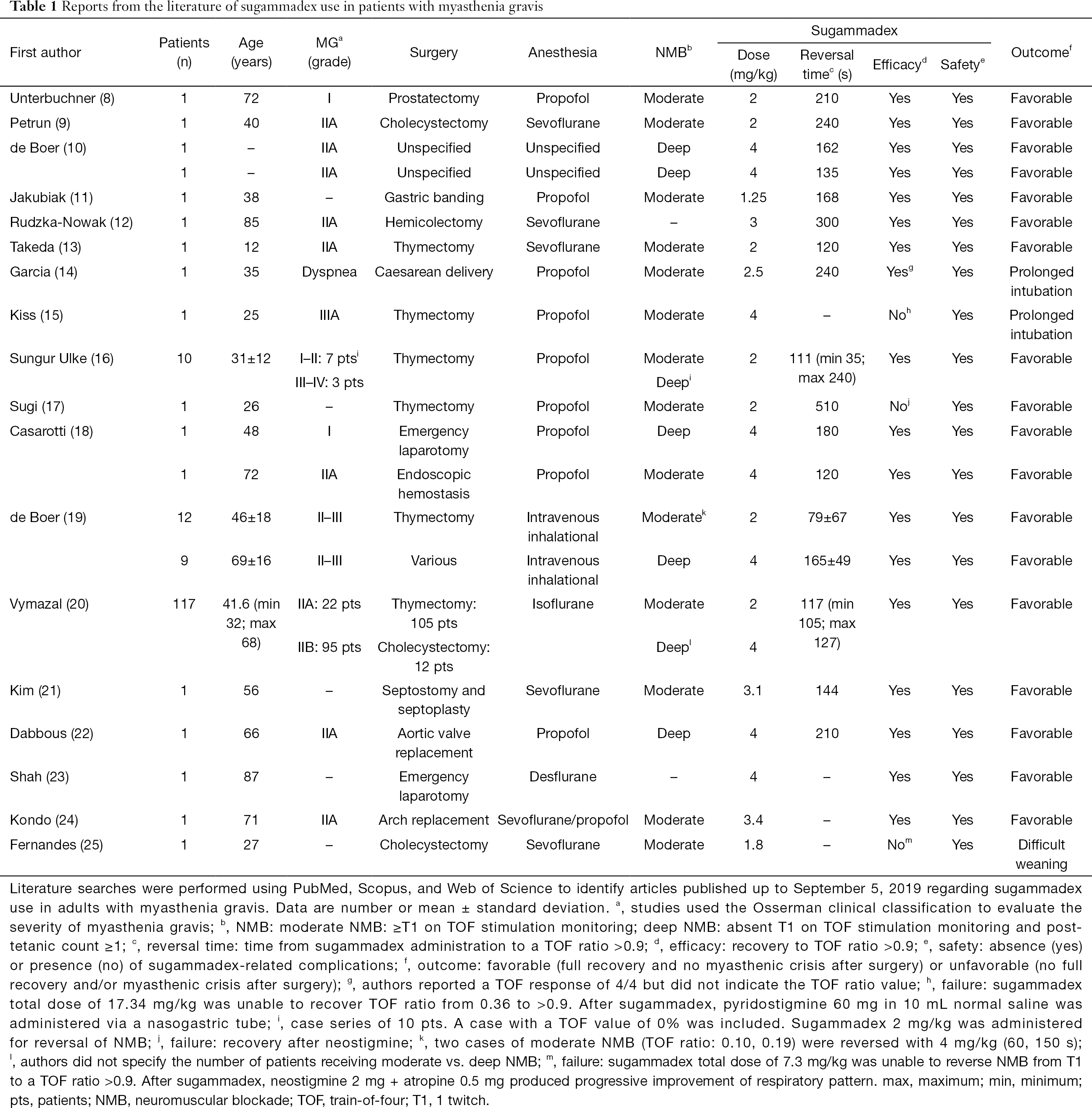 In an article published on May 20, 2019 in Anesthesia & Analgesia, Mouri and colleagues reported the results of their retrospective cohort analysis of 795 adults with myasthenia gravis who underwent thymectomy under general anesthesia from July 1, 2010 to March 31, 2016 (26). The patients were selected from the Japanese Diagnosis Procedure Combination nationwide database. Patients who received sugammadex were compared to a control group of patients who did not receive sugammadex; the authors did not specify the reversal agent (if any) used in the control group. The primary outcome was postoperative myasthenic crisis, which was defined as respiratory failure necessitating prolonged (≥3 days) mechanical ventilation postoperatively or reintubation in the first 30 days post-thymectomy. The secondary outcomes were the occurrence of postoperative pneumonia or tracheostomy, 28-day mortality, hospital length of stay after surgery, and total hospitalization costs (26). The main result was that, compared to control group patients who did not receive sugammadex (n=288), patients managed with rocuronium-sugammadex (n=507) had a significantly lower risk of postoperative myasthenic crisis [4.3% vs. 8.7%; odds ratio (OR), 0.48; 95% confidence interval (CI), 0.25–0.91] (26). Unfortunately, the authors did not indicate whether the postoperative myasthenic crises were the result of failure to adequately reverse rocuronium-induced NMB by sugammadex (26). Based on the literature, approximately 98% of patients with myasthenia gravis treated with sugammadex underwent successful tracheal extubation at the end of surgery after reaching full recovery from NMB (documented by a TOF ratio >0.9), avoiding postoperative ICU admission for mechanical ventilation (8-25).

It is important to note that although sugammadex may avoid muscle weakness related to the residual effects of NMBAs, it may not prevent exacerbation of the underlying myasthenia gravis after surgery. Severity of the disease itself is associated with an increased risk of postoperative myasthenic crisis. In multivariate logistic regression analysis, Leuzzi and colleagues showed that Osserman stage IIB (OR, 5.69) and III–IV (OR, 11.33), body mass index >28 kg/m2 (OR, 3.65), previous myasthenic crisis (OR, 24.10), duration of symptoms >2 years (OR, 5.94), and lung resection (OR, 8.48) were all independent risk factors for the development of a postoperative myasthenic crisis (4). When a myasthenic crisis occurs, administration of an acetylcholinesterase inhibitor, such as pyridostigmine or neostigmine (1,2), seems to improve muscle weakness after general anesthesia (14,15,17,25). Intravenous immune globulin or plasma exchange are other options suggested for persistent severe myasthenic crises (1).

The study of Mouri and colleagues was unable to demonstrate a significant decrease in postoperative pneumonia with sugammadex, compared to the control group (1.0% vs. 2.4%, respectively; OR, 0.44; 95% CI, 0.17–1.14) (26). Previous reports in non-myasthenic patients have shown that use of NMBAs increases the risk of pneumonia, and reversal of NMB reduces this risk. Bulka and colleagues reported that surgical patients receiving an NMBA had a higher absolute incidence of postoperative pneumonia (9.00 vs. 5.22 per 10,000 person-days at risk), with a significantly increased incidence rate ratio of 1.79 (27). Patients who received an NMBA but no reversal agent were 2.26 times more likely to develop postoperative pneumonia than patients who received an NMBA and neostigmine (27). Appropriate monitoring of neuromuscular function and reversal are thereby recommended to minimize the risk of complications related to residual NMB, including postoperative pneumonia (28). In a meta-analysis of randomized controlled trials involving patients without myasthenia gravis, our group noted that sugammadex was associated with a significantly lower risk of postoperative respiratory adverse events (OR, 0.36) and weakness (OR, 0.45), compared to neostigmine (28). The Mouri and colleagues’ study is the first study providing evidence in support of the potential benefits of sugammadex over neostigmine in reducing the risk of postoperative pneumonia, although the favorable trend did not reach statistical significance (26).

Interestingly, the study of Mouri and colleagues showed that use of sugammadex reduced median length of hospital stay after surgery (10 vs. 11 days; P<0.001) and total hospitalization costs ($13,186 vs. $14,119; P<0.001), compared with non-use of sugammadex (26). Although sugammadex produces faster and more predictable recovery from NMB than neostigmine, the direct cost of sugammadex is higher. Cost-effectiveness analyses have demonstrated that using sugammadex to reduce the time to full reversal of NMB in the operating room can be economically beneficial, depending on the cost of the operating room, the actual time saved by using sugammadex, and whether this saved time is used productively (29-31). In addition to enhancing operating room efficiency by accelerating transfer from the operating room, use of sugammadex may also reduce overall costs by decreasing the risk of postoperative complications and unplanned ICU admissions (30). Furthermore, Ledowski and colleagues noted that sugammadex use reduced the length of hospital stay by several hours (73 vs. 78 h; P=0.044) in non-myasthenic patients and suggested that this may contribute to economic benefits if it avoids an additional night in the hospital (with an estimated average cost of US $420) (32). Thus, it is not surprising that Mouri and colleagues found a significant reduction in total hospitalization costs with sugammadex. Oh and colleagues previously reported that sugammadex reduced total hospital charges by 24% in non-myasthenic patients undergoing major abdominal surgery, compared with neostigmine (33). In that study, sugammadex was associated with a 20% reduction in hospital length of stay and a 34% reduction in 30-day unplanned readmission rate. Readmission data were not reported in the Mouri and colleagues’ study (26). Whether sugammadex results in further potential economic benefit in patients with myasthenia gravis will depend on readmission costs and the extent of reduction in 30-day unplanned readmission rates in these patients (34).

The study by Mouri and colleagues leaves us with some important messages. Sugammadex is superior to neostigmine for reversing rocuronium-induced NMB in patients with myasthenia gravis undergoing surgery. It represents the treatment of choice for reducing the risk of perioperative myasthenic crisis, and possibly decreasing the risk of postoperative pneumonia, in these patients. Given the current high costs of medical care, the overall economic benefits of sugammadex represent a welcome addition to the armamentarium of anesthesiologists.

Conflicts of Interest: M Carron has received payments for lectures from Merck Sharp & Dohme (MSD), Rome, Italy. A De Cassai and F Linassi have no conflicts of interest to declare.