Can the preoperative nutritional risk score be a predictor of the outcomes in critically ill patients of lung transplantation: a retrospective study

Lung transplantation is now an alternative for many end-stage lung disease patients to be treated. As lung transplantation experience increases, early postoperative survival is improving. And some study found that the transplant candidate always had malnutrition status, such as cirrhosis awaiting liver transplantation which was at least two thirds patients (1). However, Malnutrition is frequently overlooked in LTX candidates because nutritional assessment is not routinely carried out as part of clinical practice (2).

Malnutrition is usually correlated with immune dysfunction, inflammatory procedures, and wound healing delay or failure that directly increases the incidence of postoperative complications (3). European ESPEN rules propose a screening tool called the NRS2002 (nutritional risk screening) for in-hospital use (4). Recently, one study found that PNI score also was an effective nutrition evaluation index, which might have some relationship with lung transplantation (5,6). There was a study found that early enteral feeding could prevent the rate of postoperative complication (7). And early nutritional support has been recognized as a vital component of the management to help patient, who were high nutrition risk, recovery (8).

In view of the connection between the dietary status and the prognosis of LTX individuals, we came up with the hypothesis that the nutrition status by NRS2002 and PNI before LTX could be associated with clinical prognosis. That is, the purpose of this study is to determine whether preoperative nutrition status at admission or postoperative nutrition treatment during admission for LTX was linked to clinical outcomes. And it also aims to found some potential prognosis factors of mortality.

This single-center, retrospective cohort study included 50 successive patients who underwent LTX at Wuxi People’s Hospital between 01-01-2018 and 06-30-2018. Adult lung transplantation patients (>18 years) were included in this study. Patients were excluded when they had incomplete or missing nutritional information. We excluded eight patients who missed nutrition information or incomplete. Finally, 42 patients were included in the analysis and data on energy intake and laboratory result were accurately recorded for all admitted patients during the admission period. All patients included were classified as survivors or non-survivors based on post-LTX survival status.

Surrogate markers for the assessment of status in nutrition

Problems that occurred in the postoperative period

We contrasted the incidence of postoperative complications in distinct nutritional status patients. Acute kidney injury (AKI) was described as an rise in the amount of creatinine to 0.3 mg/dL within 48 h or a 50% boost in the level of creatinine from the base value (11) while it was the first 1 week after LTX. Acute rejection was described as a medical condition that required steroid pulse treatment with clinical proof of suspected rejection or pathological results. The presence of pneumonia on a chest radiograph and favorable sputum cultures or cultures needing therapy for bronchioalveolar lavage was described as respiratory infection. Within 3 months after LTX in hospital, all significant postoperative complications and diseases were evaluated.

The primary endpoints for this study were as follows: overall survival according to the preoperative PNI score and NRS2002; major postoperative complication, including acute rejection, and postoperative pneumonia and AKI; and all cause mortality. Other secondary endpoints included ICU and hospital length of stay (LOS), postoperative extracorporeal membrane oxygenation (ECMO) and the duration of mechanical ventilation (MV) in days.

The procedure for collecting data and how it was protected

During normal clinical care, all parameters were regularly gathered into a database. Checking was done manually. Data was collected on a safe hospital computer and was de-identified and stored.

Institutional Review Board provided ethical permission for the research (No. KS2019050). As a consequence of the retrospective design and anonymization of patient identifiers, it did not involve informed consent.

For all variables, descriptive information for patient features have been calculated. Data normality was evaluated through distribution visual inspection. Depending on the distribution of information, continuous information is recorded as a mean [± standard deviation (SD)] or as a median [and interquartile range (IQR)]. Continuous variables have been dichotomized or classified when needed. As frequency or proportion, categorical variables are provided. Where applicable, differences in constant variables were analyzed using independent t-test, Manne Whitney U-test or Kruskal Wallis test. Levene’s test was conducted to evaluate variance equality. Chi-square tests or Kruskal Wallis tests were used to analyze categorical variables and frequencies where appropriate. For the primary outcome, variables associated with a univariate effect on prognosis (P value <0.05) were included in the Kruskal Wallis test. Variables considered were: age, gender, body mass index (BMI), baseline blood tests, PNI score, NRS2002 and time before commencement of feeding. Collinearity among confounding variables at different time was investigated using logistic analysis. Data analysis was performed using SPSS statistics for Windows (version 17.0). For all analyses, P<0.05 was considered statistically significant.

During the study period, 50 patients were admitted, of these patients 42 were eligible. 8 patients were excluded because of insufficient nutritional data. All enrolled 42 patients were divided into two subgroups, according to PNI score or NRS2002 (Figure 1). 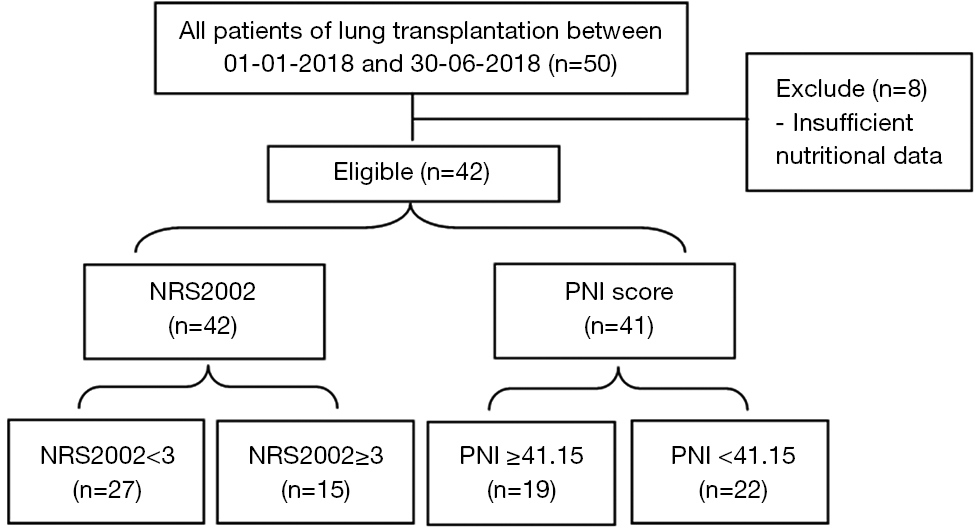 Table 1 provides the basic features of all patients with LTX and details of the underlying lung diseases of the preoperative condition. Table 2 presents the treatment and complication postoperative condition. Among the 42 patients in the study, the most common reason for LTX was idiopathic pulmonary fibrosis [26 (61.9)]. The following preoperative parameters showed important distinctions between survivors and non-survivors: age, the average calorie intake first 3 days, the average calorie intake first 7 days, parenteral nutrition within 7 days, furosemide, the time of postoperative MV, postoperative ECMO, hospital LOS. However, parameters of preoperative nutritional state were not, including BMI, NRS2002, PNI score, high risk of RFS. 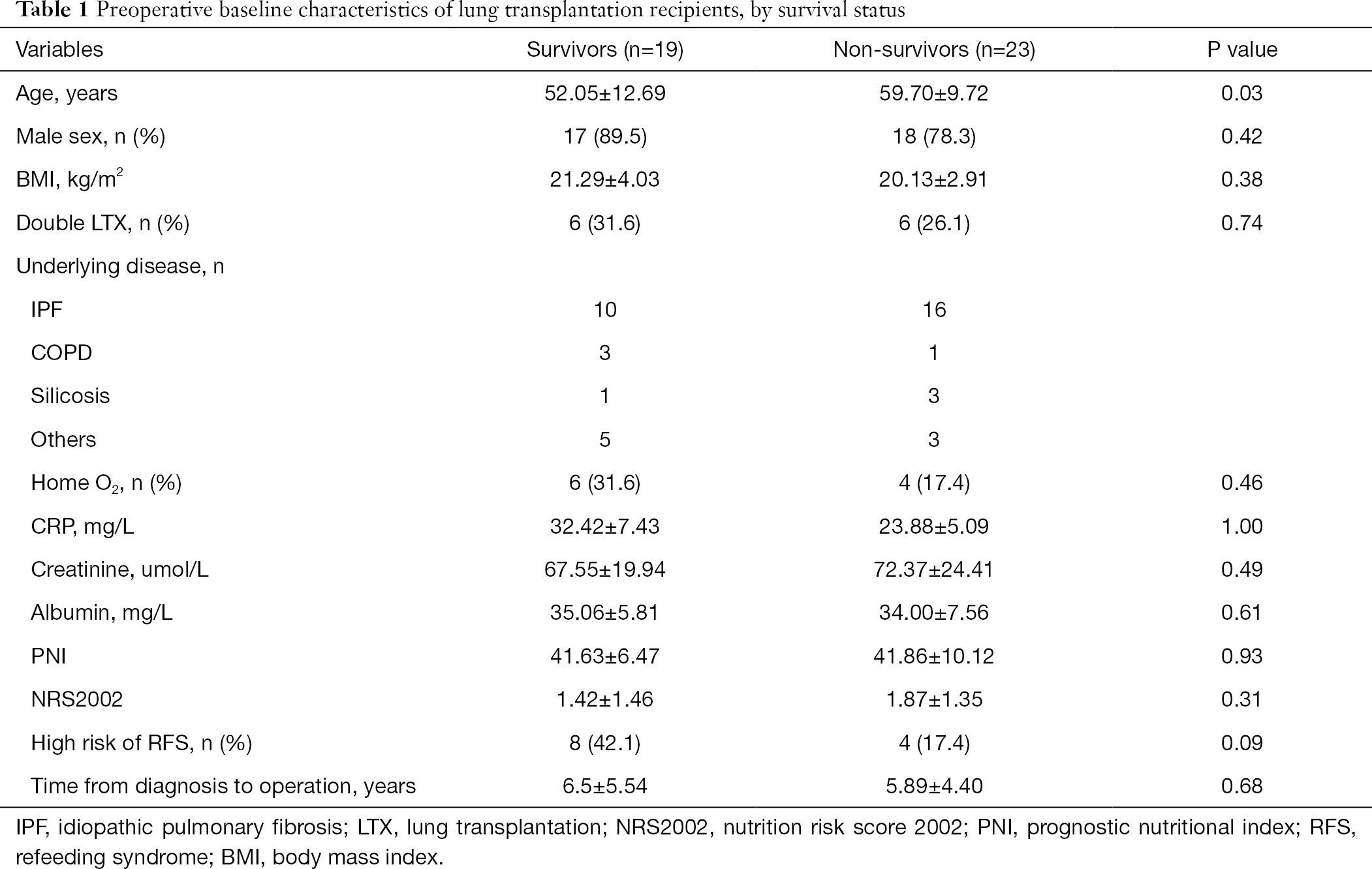 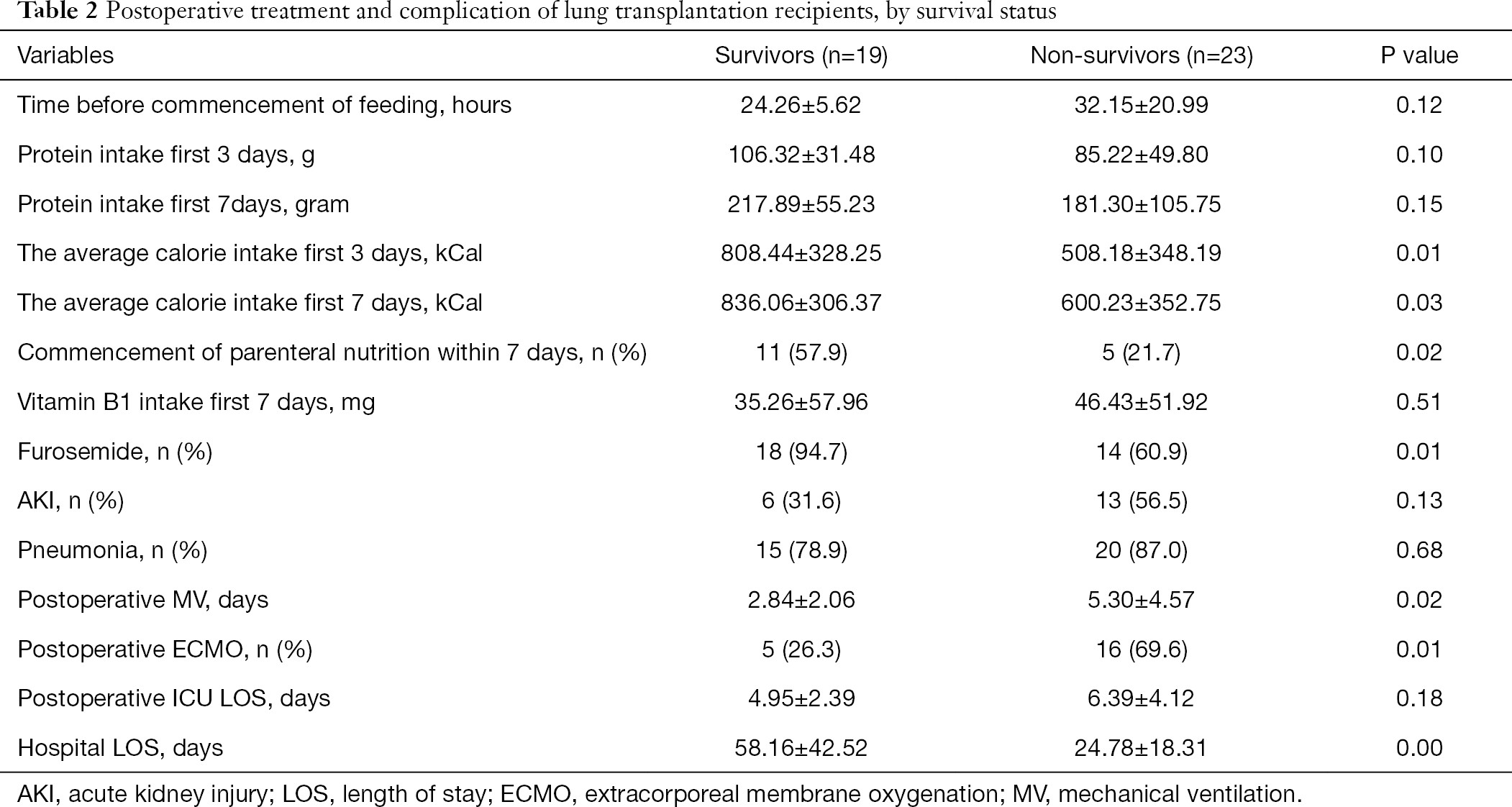 To further discuss the median cut-off PNI and NRS2002 score for the prediction of postoperative mortality by ROC analysis, the result indicated that there was no suitable cut-off point of PNI score and the cut-off point of NRS2002 was 0.5. The NRS2002 cut-off value of 0.5 corresponded to the sensitivity and specificity on the ROC curve (sensitivity: 81.6%; specificity: 31.8%), but the area of NRS2002 by ROC curve was only 0.59 (Figure S1). 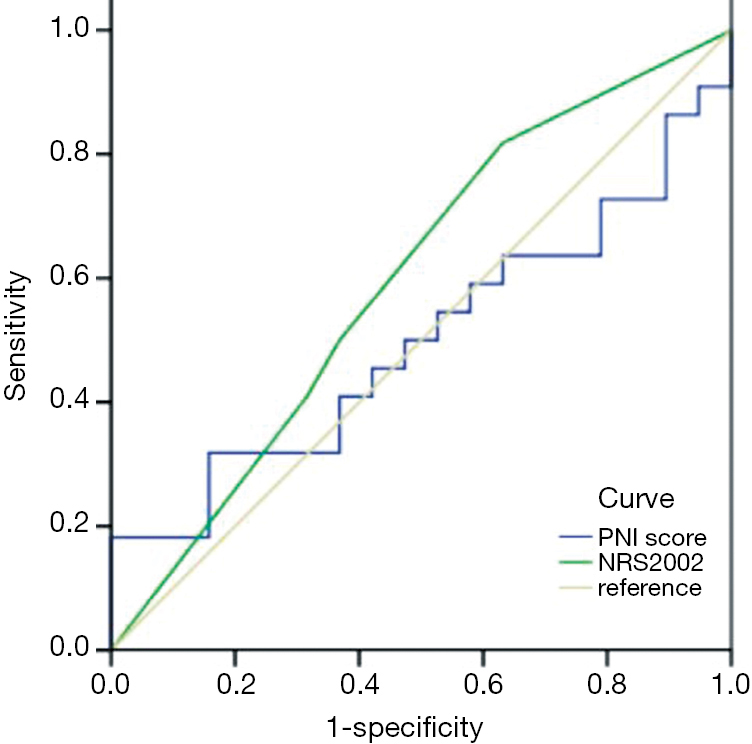 As is shown in Tables 3,4, the primary endpoints for this study and the other secondary endpoints did not differ between this different PNI score and NRS2002 score. 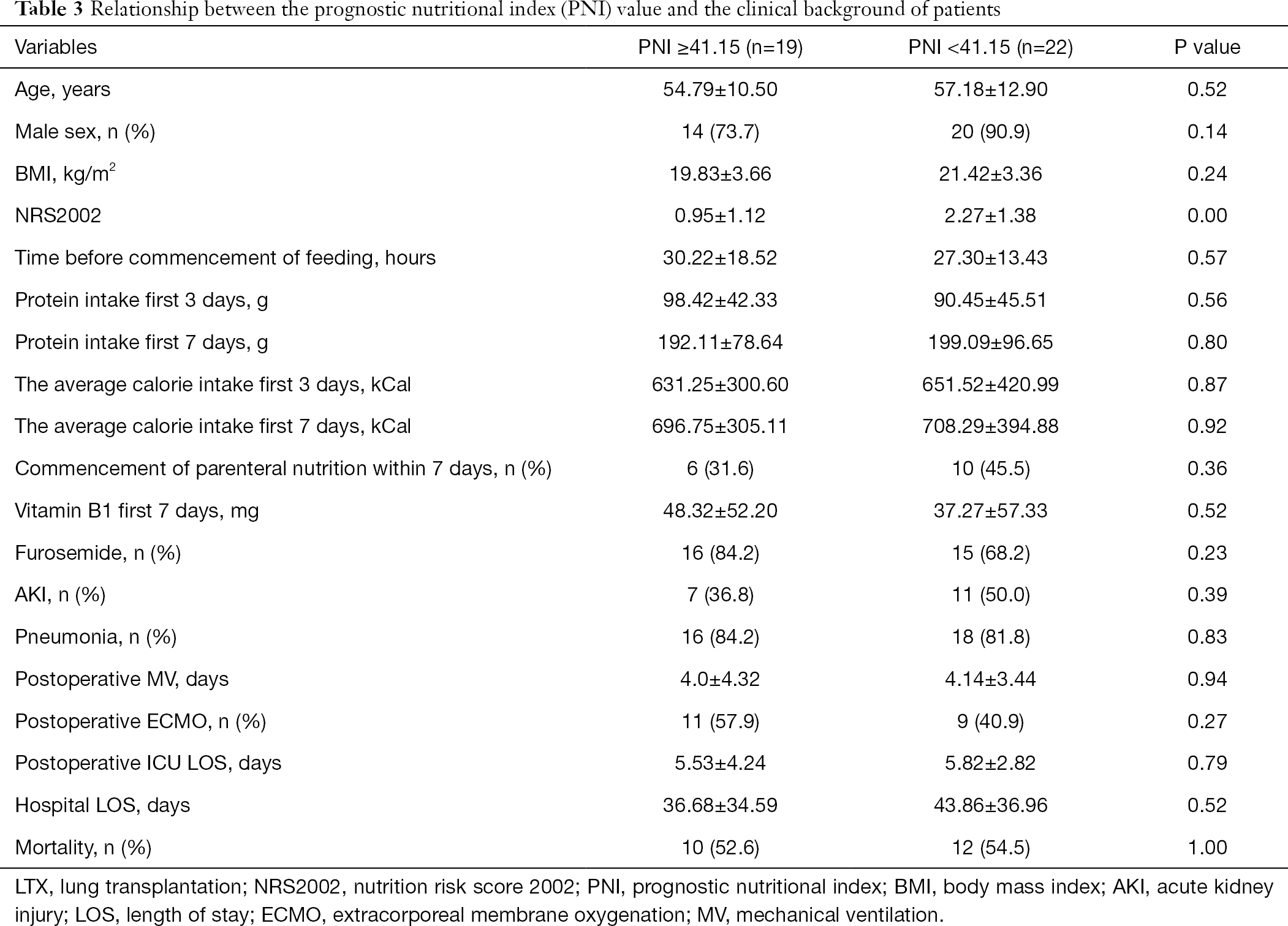 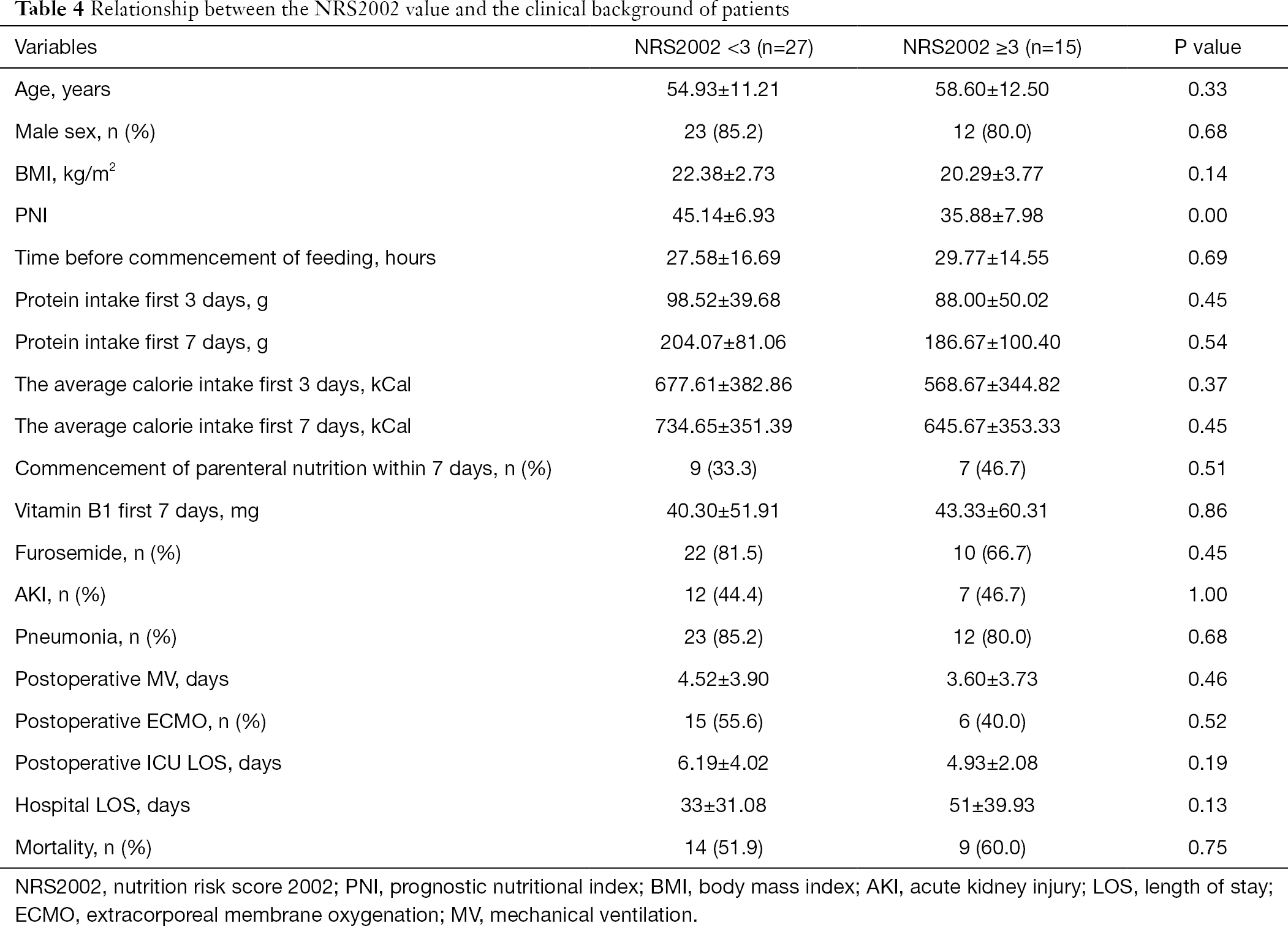 The prognosis factors and mortality

To further explore the prognosis factors related to mortality, according to univariate Logistic analysis, there were significant differences in the following parameters: age, the average calorie intake first 3 days, commencement of parenteral nutrition within 7 days, the using of furosemide after LTX and whether postoperative ECMO assistance were needed or not (Table 5). According to multivariate logistic analysis, the HR was 9.59 (95% CI: 1.07–86.13; P<0.05) for the postoperative ECMO assistance group (Table 6). 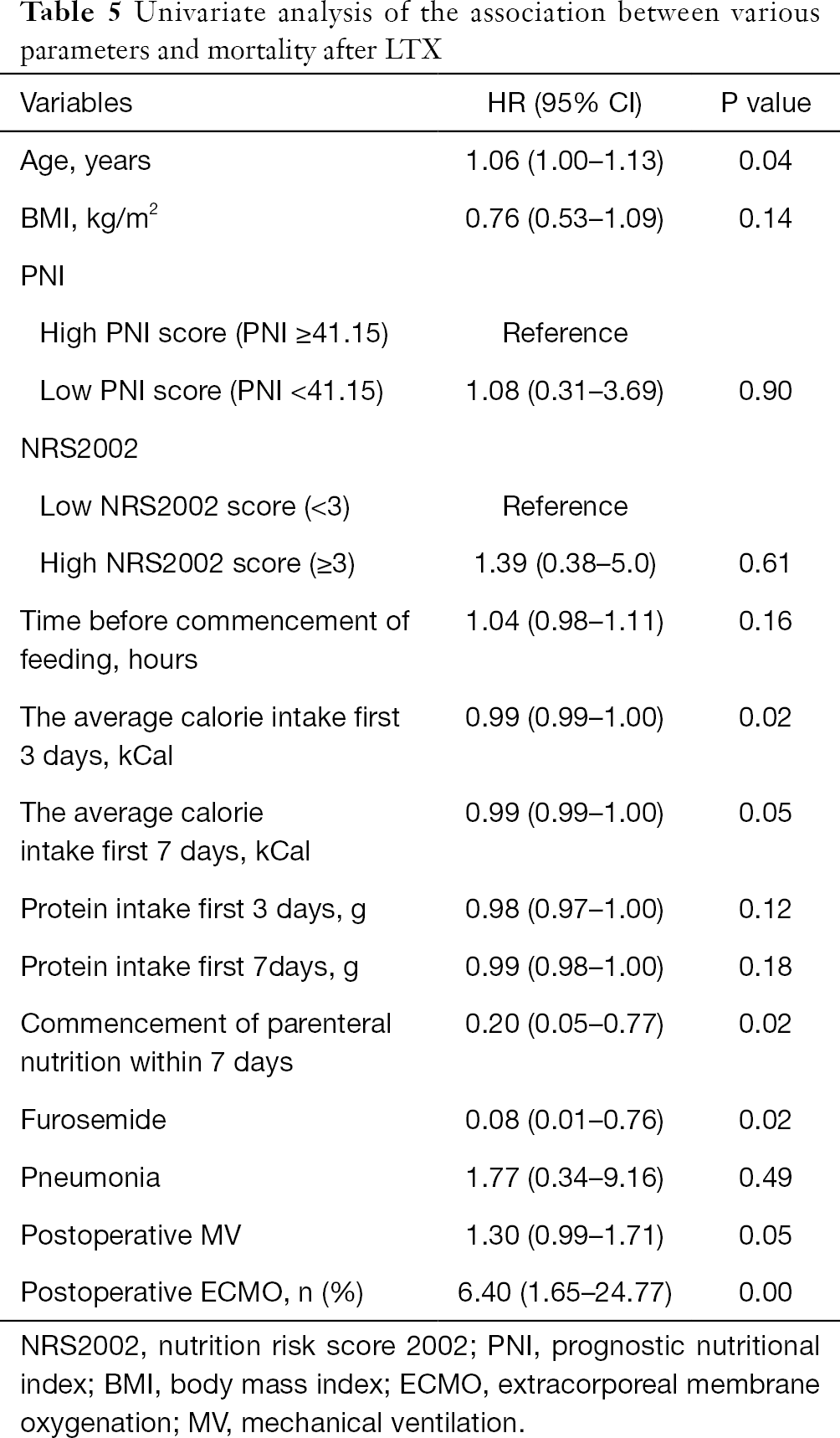 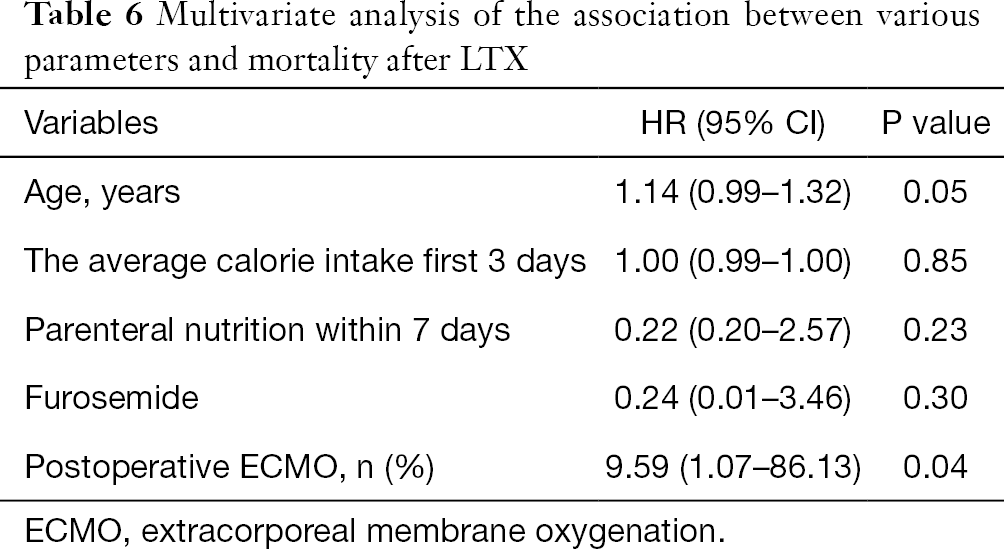 This research explored the connection among lung transplant recipients between preoperative nutritional state, nutritional treatment, and postoperative survival and complications. After adjusting for other confounding factors, we discovered no connection between nutrition and mortality outcome and complication. But we found higher mortality for patients with assistance of postoperative ECMO even after adjustment for other confounding factors.

To represent nutritional status, numerous indicators were used, including BMI, serum phosphate, and nutritional indices such as NRS2002 that were applicable to all inpatients. Onodera et al. recently proposed that a PNI score based on serum albumin concentrations and peripheral lymphocyte counts could be used as a nutritional status and mortality prognosis indicator (12). Some study (13) investigated the association between nutritional status and clinical outcomes and found that the NRS2002 were strong predictors of morbidity and mortality. What’s more, NRS2002 is also an indicator recommended by European ESPEN guidelines. However, there also was a study (14) and It was found that pre-operative feeding habits research may be sufficient to identify patients at increased risk of complications, but not nutritional risks alone.

To the best of our knowledge, there was the few studies to evaluate the association between nutrition risk and survival of lung transplant recipients. Barge-Caballero et al. found that preoperative malnourished patients of heart transplantation had a higher risk of postoperative complication and mortality after heart transplantation, and preoperative nutritional risk score may help to identify candidates who might benefit from nutritional intervention (15). This phenomenon also was found in Candidates for Continuous Flow Left Ventricular Assist Device Therapy (16). Previous nutritional studies on lung transplantation had shown that PNI has been a helpful prognostic marker for identifying high-risk lung transplant recipients and pre-operative nutritional evaluation using PNI can provide helpful data to reduce post-operative morbidity and mortality (5). In the present study, it can be found that the mortality was higher in high nutritional risk than low by PNI and NRS2002, but there was no significant difference (P>0.05). And the same as the previous study (15), the high nutritional risk by PNI received much calorie than the low. However, the intake calorie was less in high nutritional risk than low by NRS2002, although there was no statistical difference. The result seems that the PNI and NRS2002 had no obvious relationship with mortality and morbidity.

There are several constraints to this research. The first restriction is the study’s retrospective design and we found that the clinicians did not routinely assess nutritional risk in LTX, such as PNI or NRS2002. Second, although PNI and NRS2002 has been proposed as a simple surrogate marker for evaluation of the nutritional status, but there are not specific to lung transplant patients, even not to surgical patients. Third, as mentioned earlier, due to the retrospective nature of the research, we were unable to assess whether an enhancement in nutritional status before surgery impacted patient results. At last, this retrospective study only had 42 LTX patients, due to insufficient sample size, it cannot be effectively drawing a correct conclusion.

Ethical Statement: The authors are accountable for all aspects of the work in ensuring that questions related to the accuracy or integrity of any part of the work are appropriately investigated and resolved. The protocol for the research project has been approved by Ethics Committee of the institution of Wuxi People’s Hospital affiliated to Nanjing Medical University (No. KS2019050) and it conforms to the provisions of in accordance with the Helsinki Declaration as revised in 2013.