Patients with metastatic renal cell carcinoma (mRCC) who have metastases to the brain have poor prognosis and median overall survival (OS) of 6 to 10 months (1,2). Local treatments such as surgical resection, stereotactic radiosurgery (SRS) and whole brain radiation therapy (WBRT) are the mainstay of treatment in these patients. The decision to choose one of these approaches depends on the number, size and location of the brain lesions, presence or absence of symptoms and the level of expertise available in the treating facility. Surgical resection is generally performed in patients with a solitary and easily accessible brain lesion. WBRT is mostly utilized in the treatment of patients with numerous brain metastases (mostly for >10 lesions) and SRS is the treatment of choice in patients with limited brain metastases (up to 10 lesions). The rate of local control with SRS is more than 90% (3,4) and overall, it has been found to be safe and well-tolerated by patients. 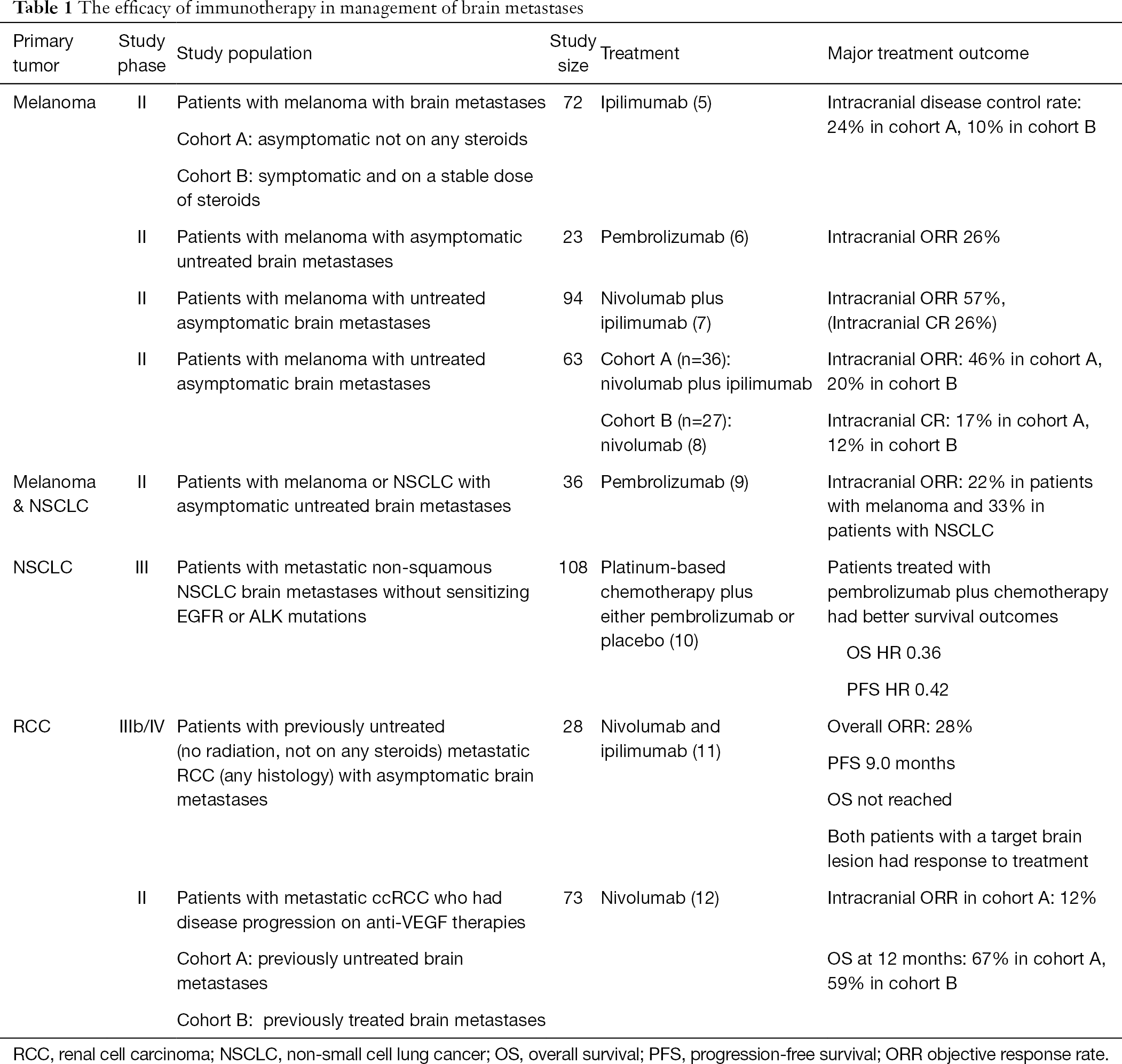 CheckMate-920 is a phase IIIb/VI clinical trial to study the safety and efficacy of the combination of ipilimumab plus nivolumab followed by maintenance nivolumab in previously untreated mRCC. The cohort 3 of this clinical trial enrolled patients with mRCC of any histology who had asymptomatic brain metastases. Among 28 patients who were enrolled in the brain metastases cohort, 21 patients had non-target (smaller than 10 mm or previously irradiated) brain lesions. The minimum follow up at the time of interim analysis was 6.5 months at which point, 2 patients had significant decrease in size of the target brain lesion and 5 patients (17%) had progression of non-target brain lesions or developed new brain metastases (11).

The GETUG-AFU 26 NIVOREN Brain Metastases study is a phase II clinical trial which enrolled patients with mRCC brain metastases who had disease progression on at least one prior anti-VEGF therapy. Patients with asymptomatic previously untreated target brain lesions were included in cohort A (39 patients) and those with previously treated target brain metastases were included in cohort B (34 patients). In Nivoren-26 clinical trial, the ORR was 19% which was lower than the ORR 25% in CheckMate-025. The worse outcomes in Nivoren-26 can be due to the previously heavily treated patient population which are less likely to respond to treatment. In Nivoren-26 study, 31% of the patients had 2 prior anti-VEGF therapies and 31% of the patients were previously treated with at least 3 anti-VEGF therapy, whereas in CheckMate-025 study, 72% of the patients had only one prior anti-VEGF therapy. Moreover, RCC cells which invade into the brain may be less responsive to immunotherapy, which might have led to worse outcomes in patients in the Nivoren-26 study compared to CheckMate-025 study which excluded patients with brain metastases (12,14).

Using concurrent immunotherapy with radiation therapy can yield a synergistic effect against tumor cells. One of the mechanisms that malignant cells evade the immune system is by decreasing the expression of the tumor antigens. Radiation therapy to solid tumors results in necrosis of the tumor tissue and release of tumor antigens into the blood which increases the exposure of the immune system into the tumor antigens. PEMBRO-RT is a phase II clinical trial which randomized 72 patients with metastatic NSCLC to receive the combination of pembrolizumab plus SBRT or pembrolizumab only. No increase in toxicity was observed in the combination arm. The ORR at 12 weeks was significantly better in patients treated with combination therapy (36%) compared with those treated with pembrolizumab monotherapy (18%). However, there was no statistically significant difference in PFS and OS between the treatment arms. A subgroup analysis showed that the clinical benefit from addition of RT to pembrolizumab was mainly seen among patients with negative PD-L1 expression (20). Several clinical trials are currently investigating the abscopal effect with combination of RT and immunotherapy in patients with Hodgkin’s lymphoma (NCT03480334), melanoma (NCT03354962), esophageal and gastric cancer (NCT02830594), and carcinoma of unknown primary (NCT03396471).

Retrospective studies suggest a synergy between SRS of brain lesions and systemic treatment with checkpoint inhibitors. In a retrospective study of 260 patients with melanoma, NSCLC and RCC with brain metastases, patients treated with stereotactic radiosurgery-stereotactic radiation therapy (SRS-SRT) and concurrent immunotherapy (within 2 weeks of radiation) had significantly longer OS compared to those who were treated with SRS-SRT only (HR 2.69, P 0.002) or non-concurrent immunotherapy (HR 2.40, P 0.006). Moreover, there was a significant decrease in incidence of new brain metastases in patients treated with concurrent SRS plus checkpoint inhibitors (odds ratio 0.33, P=0.045) (21). Several ongoing clinical trials are investigating the safety and efficacy of the combination of SRS plus checkpoint inhibitors in patients with melanoma and NSCLC with brain metastases (NCT03340129, NCT02858869).