Pathological diagnosis of oncocytic renal tumor is usually difficult task, and their differential diagnosis involves chromophobe renal cell carcinoma (ChRCC), renal oncocytoma (RO), clear cell renal cell carcinoma (CCRCC), epithelioid angiomyolipoma (EAML), etc. Hybrid oncocytic/chromophobe tumor (HOCT) of the kidney is an emerging entity, and there is no description on HOCT in the WHO classification of the urinary system, third edition (1). HOCT was first used to describe tumors showing pathological features of both RO and ChRCC. At the beginning, HOCT has been reported in patients with Birt-Hogg-Dubé syndrome (BHD) (2,3), or those with renal oncocytosis (4,5). Recently, HOCTs have been also reported in patients without background diseases (6,7). Thus, HOCT has been recognized as a renal tumor, but there is only brief description on HOCT in the histopathology section of ChRCC in the 2016 WHO classification of renal tumors as below (8); “A small subset of tumors have overlapping histology between RO and ChRCC, and which are commonly seen in BHD and renal oncocytosis”. It is currently a field of undergoing intense study whether HOCT is a subtype of RO, ChRCC or a distinct renal tumor entity. Therefore, we comment on important studies of HOCT including recently published paper by Ruiz-Cordero et al. (9). In addition, we briefly describe the differential diagnosis of solid renal tumors with oncocytic/eosinophilic cytoplasm from a pathological point of view, which includes oncocytic variant of ChRCC.

Clinically, the median age of the HOCT patients at the diagnosis was seventh and eighth decades, and male patients tended to be slightly more common than female (7,9,10). Characteristic BHD clinicopathological background is observed in HOCTs associated with BHD, but no characteristic symptoms have been reported in HOCTs of non-BHD patients. Many patients with sporadic HOCT had solitary masses, but multiple tumors including bilateral ones occurred in some patients, particularly those with BHD. Majority of HOCT patients seemed to behave indolently without evidence of malignant behavior, but distant metastasis and unclassified renal cell carcinoma (RCC), WHO/ISUP grade 4, arising within background of HOCT were recently reported (9).

Macroscopically, HOCT is well circumscribed and non-encapsulated, and their cut surfaces are homogenous tan to brown without necrosis. Generally, they are localized tumors without invasion to the adipose tissue nor vascular invasion (7). Histologically, HOCTs are consisted of slightly atypical nuclei and rich eosinophilic cytoplasm mainly showing a solid alveolar pattern (Figure 1). Perinuclear halo and binucleated cells are frequently observed (Figure 1), but there are no raisinoid nuclei, characteristic to ChRCC. Perinuclear cytoplasmic clearing is observed in HOCT, resembling ChRCC closely. Tumor cells are similar to those of RO. Some HOCTs might have morphological features both of RO and ChRCC. There might not be a clear boundary between RO-like regions and ChRCC-like regions. 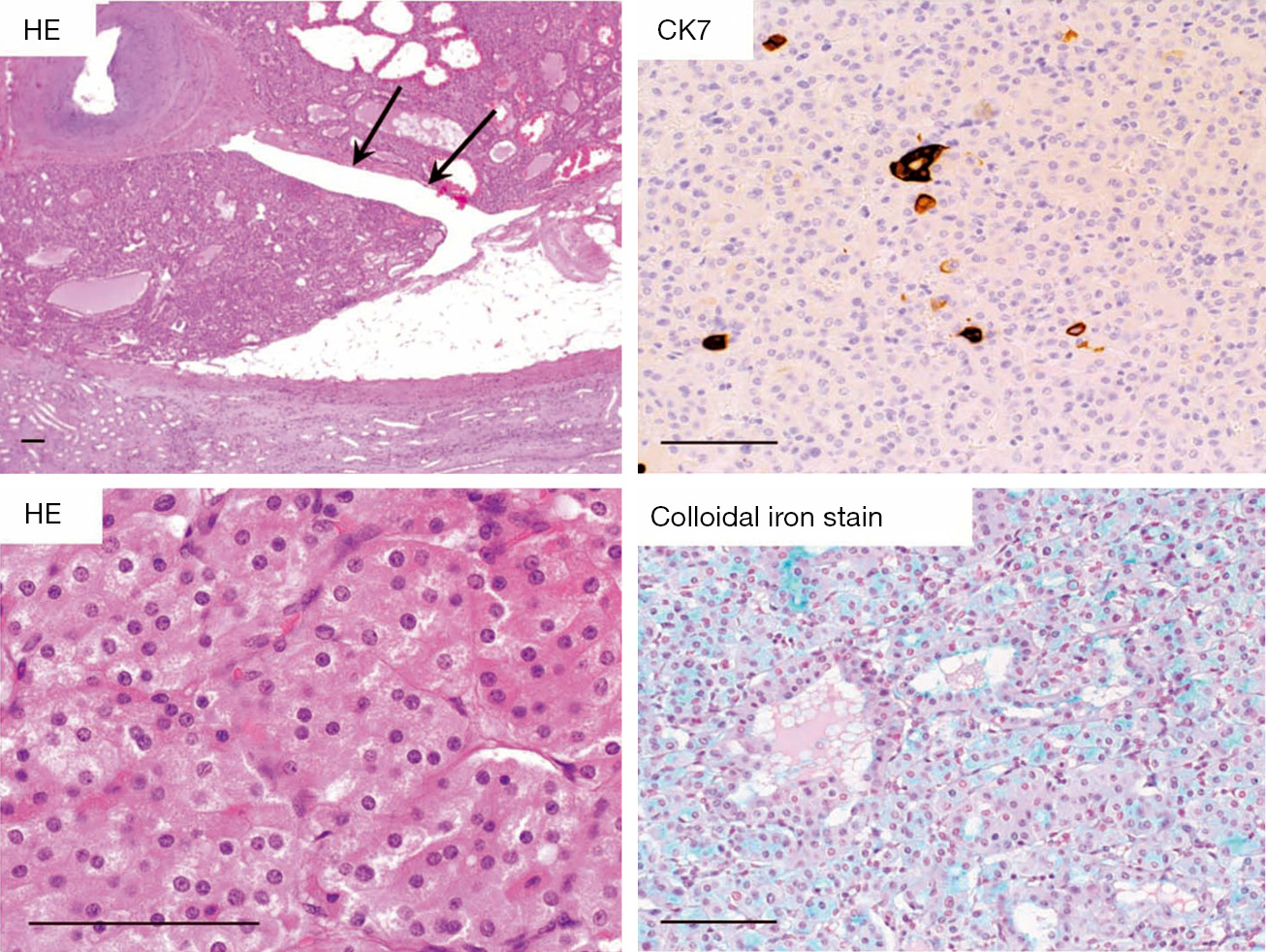 Hale’s colloidal iron stain is only focally positive in the apical portion of tumor cells of HOCTs, by contrast to ChRCC with diffuse positive staining. This staining pattern is rather similar to that in RO. Immunohistochemically, all HOCTs are positive for pan-cytokeratin and mitochondrial antigen. Cytokeratin 7 (CK7), E-cadherin, and parvalbumin expression are also observed in most cases, but the proportion of positive cells varies among cases. On the contrary, α-methylacyl-CoA racemase (AMACR), CK20, CD10, carbonic anhydrase 9 (CA9) staining tended to be negative except for focal staining in some tumors. Based on morphological and immunohistochemical characteristics, HOCT is considered to harbor a mixture of the immunohistochemical features that overlap with those of RO and ChRCC.

To elucidate the molecular characteristics of HOCT, analyses were performed by 2 groups, but conflicting results were obtained. Analysis of 14 sporadic HOCTs by fluorescence in situ hybridization and Sanger sequencing revealed that all HOCTs showed some chromosomal imbalances, and the most common numerical aberration was found in chromosome 20 (7). This result is distinct from those of both RO and ChRCC. Another analysis of 10 sporadic HOCTs and 2 HOCTs associated with BHD using array-comparative genomic hybridization showed no chromosome imbalances in about half cases (58%) (10). These findings and similar Hale’s colloidal iron staining pattern suggested HOCTs might be a variant of RO. In recent study by Ruiz-Cordero et al., the mutational and transcriptomic analysis of HOCTs was performed in addition to the DNA copy number analysis (9). This study revealed that up to 40% of HOCTs did not show chromosomal arm-spanning imbalances, and the results is consistent with the previous study (10). Losses at chromosome 1 or X/Y were predominant copy number aberrations and this is similar to these reported in RO and eosinophilic variant of ChRCC (7,10). Furthermore, even deep-targeted next-generation sequencing of HOCTs failed to find genetic abnormally in genes reported to be mutated in RO (ERCC2) or ChRCC (TP53 and PTEN). Finally, an analysis of differently expressed genes between RO and ChRCC revealed that HOCTs show an intermediate features between RO and ChRCC, and this results are compatible with the pervious study of three HOCTs associated with BHD (11). These data, altogether, indicates that HOCTs are clinicopathologically and molecular biologically distinct from RO and ChRCC. Therefore, pathologist should render correct diagnosis of HOCT instead of “RO with chromophobe areas” or “tumor of overlapping histology” (12,13).

Correct pathological diagnosis of HOCTs requires accurate differential diagnosis of solid eosinophilic renal tumors, such as CCRCC, ChRCC, RO, EAML, etc. CCRCC with granular or eosinophilic cytoplasm is characterized by rich and fine vascular network and diffuse CA9 staining. A perinuclear halo, raisinoid nuclei, diffuse staining pattern of Hale’s colloidal iron stain, CD117, CK7 are observed in ChRCC. Although perinuclear halo is common in HOCTs, no raisinoid nuclei is observed in HOCTs. Typical RO differs is distinct from HOCT in that small tumor cells proliferate in solid alveolar pattern. RO also shows cytoplasmic CD117 staining, but negative or only focally positive for CK7. In addition, Hale’s colloidal iron staining was limited to the apical portion of RO tissue. EAML is sometimes misdiagnosed as high-grade RCC or other tumors. Most importantly, EAML should be suspected in cases where the morphological characteristics of RCC and RO are poor. Immunohistochemically, EAML is negative for CK and EMA, and positive for melanocytic differentiation markers, such as Melan A.

As for differential diagnosis of oncocytic/eosinophilic renal tumor, such as RO, ChRCC and HOCT, a new variant of ChRCC, namely an oncocytic variant of ChRCC, previously proposed by Kuroda et al. should be considered (14). This variant has not been described in the WHO 2016 classification of renal tumors (8), but we diagnose ChRCC, oncocytic variant as often as HOCT in daily pathological diagnosis. Macroscopically, the tumor was well-circumscribed without encapsulation, and the cut surface showed brown without necrosis nor hemorrhage. In ChRCC, oncocytic variant, eosinophilic tumor cells were mainly arranged in tubular pattern, and some cases showed focal solid growth (Figure 2). Tumor cells showed relatively uniform in size, indistinct to slightly distinct cell border without apparent perinuclear halo. These findings are similar to those of RO not ChRCC, but diffuse CK7 staining was observed in ChRCC, oncocytic variant, in contrast to negative for focally positive staining in RO. CD117 is negative in ChRCC, oncocytic variant, and this was different from that in RO and typical ChRCC. Furthermore, FISH analysis revealed that the loss of chromosome 7, 10, 13, 17 and 21 in all tumors, which was characteristics of ChRCC. Recently, Trpkov et al. reported low-grade oncocytic tumors of kidney (CD117-negative, CK7-positive), and these tumors were similar to ChRCC, oncocytic variant (15). 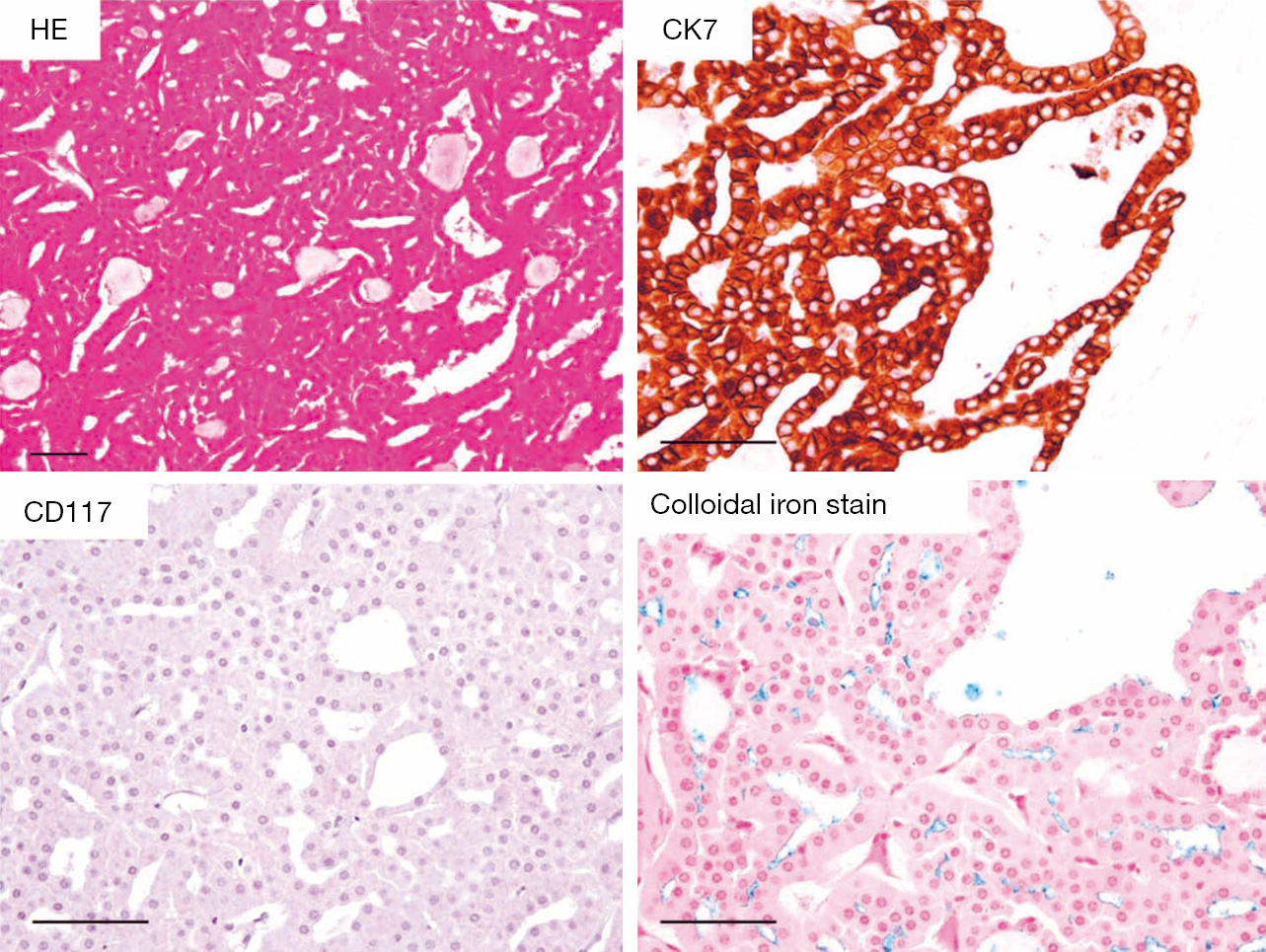 In conclusions, these data clearly indicate that HOCT is a distinct tumor entity and that ChRCC, oncocytic variant, is a distinct subtype of ChRCC. Therefore, we think that HOCT should be included in the WHO classification of urinary system, fifth edition, as a new entity, and that the description of ChRCC, oncocytic variant, should be added in histopathology section of ChRCC.

The authors thank Mr. Kazunari Shibata and Takashi Mamizuka, Department of Diagnostic Pathology, Keio University Hospital, for their technical assistance. This manuscript was supported in part by a Grant-in-Aid for Scientific Research (C) (19K07468) from the Ministry of Education, Culture, Sports, Science, and Technology of Japan (MEXT) (Shuji Mikami).