BRAF mutations occur in 8–12% of metastatic colorectal cancers (mCRC) and more than 95% of them consist in a T>A transversion in exon 15 resulting in an amino acid substitution from valine to glutamic acid (V600E) that is able to increase BRAF kinase activity by approximately 10-fold (1,2). BRAF V600E mutant mCRC is a hard challenge of modern oncology due to its awfully poor prognosis: the median overall survival (OS) of patients affected by BRAF mutant mCRC with standard treatments is around 12 months, that is close to the median first-line progression free survival (PFS) of patients with BRAF wild-type tumours (1,2). In fact, not only the clinical outcome with upfront doublets plus a targeted agent is unsatisfactory, but also the percentage of patients able to receive further treatments after progression is extremely low and the benefit provided is limited, with reported overall response rate (ORR) of less than 10%, median PFS of about 2 months, and median OS ranging from 4 to 6 months (3-5).

Therefore, drawing from the rationale of counteracting the intrinsic biologic aggressiveness of this disease with an intensified upfront regimen, and based on results of a retrospective experience (6), a prospective phase II study (7), and a subgroup analysis of a phase III randomized study (8), FOLFOXIRI (fluorouracil, oxaliplatin and irinotecan) plus bevacizumab is now regarded as a “standard” first-line option for patients with BRAF mutant mCRC, able to receive this treatment.

Nevertheless, this recommendation is based on a relatively small number of treated patients and only a percentage of BRAF mutant patients in the clinical practice is fit enough to receive this regimen, also considering the higher incidence of BRAF V600E mutation among elderly patients and the frequent occurrence in patients with suboptimal general conditions (ECOG PS 2).

Many efforts have been made in order to turn BRAF V600E mutation from a strong point for the tumour into its Achille’s heal. Initial results with BRAF inhibitors were unexpectedly disappointing compared to those achieved in metastatic melanoma. Only one partial response was reported among 21 patients treated with vemurafenib monotherapy in a phase II study with a median PFS of 2.1 months (9). An explanation to this failure was found moving back from bedside to bench, since preclinical data suggested an hyperactivation of EGFR able to convey a reactivation of MAPKs in CRC cell lines—and not in melanoma lines—following BRAF inhibition. Targeting EGFR was an efficacious strategy to make these cell lines sensitive to the BRAF inhibitor, thus achieving a synergistic inhibition of tumour growth. Subsequent phase I and II studies combining BRAF inhibitors (vemurafenib and dabrafenib) with anti-EGFR monoclonal antibodies (cetuximab or panitumumab) confirmed improved activity in BRAFV600E mutated mCRC, but with heterogeneous results across different trials assessing different combinations (10).

Preclinical studies showed that a deeper inhibition of the MAPK pathway could be obtained by combining BRAF and MEK inhibition. Differently from results in advanced melanoma, this strategy as well as other combinations of chemotherapy and BRAF/EGFR inhibitors did not provide the awaited improvements with an ORR of approximately 20% and a median PFS of 4–5 months, highlighting the need to develop more effective therapies (11). In this scenario, the triple combination of BRAF, MEK and EGFR inhibitors was evaluated. A phase II study of dabrafenib, trametinib and panitumumab reported an encouraging ORR of 21%, with a not impressive median PFS of 4.1 months (12). More recently, a new ATP-competitive BRAF inhibitor with a more than 10-time longer dissociation half-life (>30 hours) than either dabrafenib or vemurafenib, encorafenib, was developed. The combination of encorafenib with cetuximab showed promising results in a phase II study enrolling patients who had progressed after at least one therapy with a confirmed ORR of 24%, a PFS of 4.2 months and a median OS of 9.3 months (13). The same combination with the addition of the non-ATP-competitive, allosteric MEK1/2 inhibitor binimetinib was evaluated in the BEACON study (14,15). This open-label, randomized, three-arm, phase III trial was launched to evaluate the efficacy and safety of encorafenib plus cetuximab with or without binimetinib versus cetuximab combined with either irinotecan or FOLFIRI at investigators’ choice in patients with BRAFV600E mutated mCRC progressed after one or two prior regimens. Since the triplet combination of binimetinib, encorafenib and cetuximab had not been clinically evaluated before, a safety lead-in (SLI) phase including around 30 patients was planned to determine the safety, tolerability and preliminary activity of the “biological triplet” at the doses planned for the randomized phase of the trial. Overall, the treatment was well tolerated with a safety profile similar to that previously reported for individual agents, being fatigue (13%), anaemia (10%), increased AST (10%), increased creatine-phosphokinase (10%) and urinary tract infections (10%) the most common grade 3 or 4 adverse events. Grade 3/4 skin toxicities were rare and were less common than the 12% rate of rash reported with cetuximab monotherapy, suggesting that the simultaneous BRAF inhibition might be able mitigate this cetuximab-related adverse event. Efficacy results of the SLI phase were quite exciting with a confirmed ORR of 48%, median PFS of 8.0 months and median OS of 15.3 months, almost doubled as compared to other triple combinations (14). Based on these data, NCCN guidelines included this triplet combination as a treatment option in patients with BRAF mutated mCRC progressed after one or two prior regimens (16).

At the last ESMO World Congress on Gastrointestinal Cancer, the overall results of the phase III BEACON trial were presented (15). In the original design, the primary endpoint of the study was the OS of the triplet versus the control arm. PFS and ORR of triplet versus control and OS, PFS and ORR of doublet versus control would have been tested as secondary endpoints in a hierarchical manner if the primary endpoint was met. Results of the SLI led to the inclusion of ORR as an additional primary endpoint and to the introduction of an interim OS analysis to allow an early assessment of trial’s results. Overall, 224 patients were treated with encorafenib, binimetinib and cetuximab, 220 with encorafenib and cetuximab and 221 with irinotecan or FOLFIRI plus cetuximab. The study met its primary endpoints. At a median follow-up of 7.8 months, median OS was significantly longer in the triplet arm respect to the control arm (9.0 vs. 5.4 months; HR: 0.52, 95% CI: 0.39–0.70; P<0.0001) and also ORR was significantly higher in the triplet arm (26% vs. 2%; P<0.0001). In addition, all other secondary endpoints were in favour of the triplet or doublet arm as compared with the control arm (Table 1) (15). Notable, even if the study was not powered to formally compare the results of the triplet to the doublet combination, the efficacy and activity of encorafenib, binimetinib and cetuximab was similar to encorafenib and cetuximab. The safety profile of the triplet was acceptable, similar to that of the control arm, but worse than the doublet. Most common grade 3 or 4 AEs of triplet, doublet and control arm reported in more than 5% were diarrhoea (10% vs. 2% vs. 10%), abdominal pain (6% vs. 2% vs. 5%), nausea (5% vs. <1% vs. 1%), asthenia (3% vs. 3% vs. 5%) and anaemia (10% vs. 5% vs. 4%) (15). 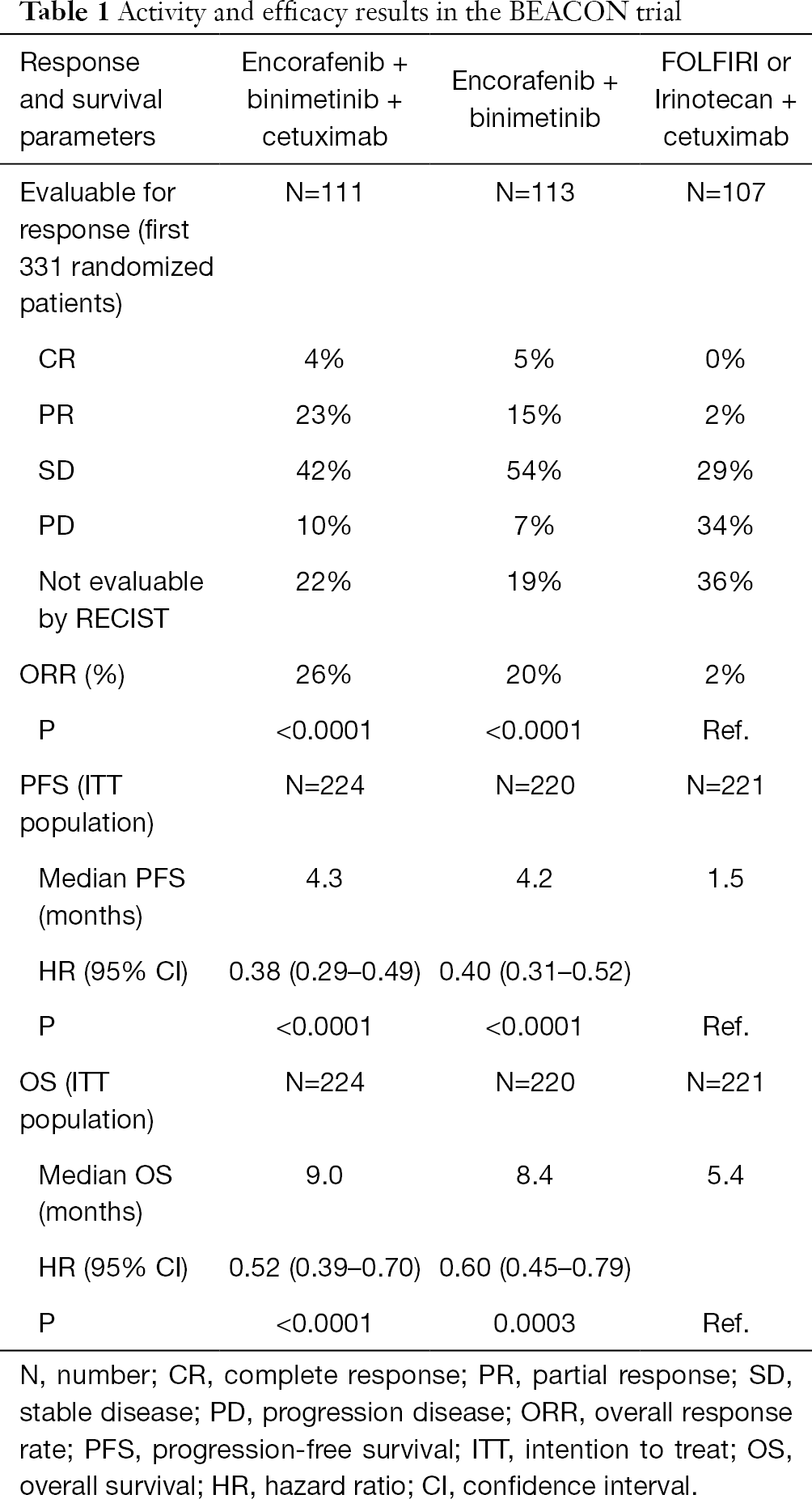 BEACON is the first phase III trial conducted in the specific population of BRAF V600E-mutant mCRC patients and provides the first demonstration of the efficacy of a targeted approach in this subgroup at poor prognosis. Moreover, the “BEACON strategy” stands as one of the first examples of personalized oncology in the field of colorectal cancer, identifying BRAF V600 mutation as a positive predictor of benefit from a therapeutic approach.

At the same time, both the study design and its findings deserve some considerations.

Firstly, the choice of the control arm of the BEACON study is rather questionable, as the usefulness of anti-EGFR antibodies in BRAF mutant mCRC is limited or null, especially in the second and further lines of treatment. The PICCOLO study showed a statistically significant detrimental effect of the addition of anti-EGFR to irinotecan in terms of PFS when administered in the second line therapy of BRAF-mutant mCRC (17). On the other hand, an advantage by adding aflibercept or ramucirumab to second-line FOLFIRI was suggested in the VELOUR (18) and RAISE (19) study respectively, with a median OS of 9–10 months with the antiangiogenics as compared with 4–5 months with FOLFIRI alone.

Secondly, even if not formally compared, outcomes reported with the triplet and the doublet are quite similar with a better safety profile for the doublet, thus not demonstrating any reduction of the BRAF inhibitor-related toxicity, especially the occurrence of secondary squamous-cell skin cancer and other skin adverse events with the addition of the MEK inhibitor, as previously demonstrated with vemurafenib/cobimetinib (20) and dabrafenib/trametinib (21). This observation might be explained by the higher extent of BRAF inhibition by encorafenib—as compared with other BRAF inhibitors—that could reduce the paradoxical activation of MAPK pathways in normal tissues, thus limiting adverse events associated with this biological effect, while enhancing the anti-tumour activity. This hypothesis is supported also by the low incidence of skin-related toxicities, and in particular of secondary skin malignancies, reported so far. By a clinical point of view, based on available data, the added value of the MEK inhibitor in this therapeutic strategy is questionable.

Thirdly, an open issue is the management of mCRCs bearing both BRAF V600E mutation and microsatellite instability, considering the association of these molecular characteristics in up to 30% of BRAF mutant mCRCs (1). Only the 5–10% of patients included in the BEACON study had a MSI-high or dMMR tumour, probably as a consequence of the simultaneous diffusion of checkpoint inhibitors as a therapeutic tool for MSI-high tumours in the United States. Based on available data, though in the absence of a formal comparison, results achieved with immunotherapy agents seem more convincing and are independent of BRAF mutational status (22,23).

Forthly, emerging evidence shows a high degree of heterogeneity among BRAF-mutant mCRC patients both by a clinical and molecular point of view (24). From a molecular perspective, two distinct subgroups of BRAFV600E mutant CRC were recently distinguished based on gene expression profile beyond microsatellite instability: one, named BM1, exhibiting high KRAS/mTOR/AKT/4EBP1, EMT activation and immune infiltration and the other, named BM2, presenting cell cycle checkpoint dysregulation. BM1 cell lines are more sensitive to BRAF, BCL2 and MEK inhibition as compared with BM2 lines. On the other hand, BM2 cell lines are more sensitive to CDK1 inhibition as compared with BM1. Therefore, a retrospective gene expression analysis of tumour tissues of patients enrolled in the BEACON trial could help to personalize treatment choices in BRAF mutant mCRC patients.

In conclusion, the BEACON study lights up a new hope for BRAF mutant patients and for the development of targeted strategies in mCRC. The combination of encorafenib and cetuximab with or without binimetinib should become a new standard in this setting. A phase II study named ANCHOR-CRC (encorAfenib, biNimetinib and Cetuximab in Subjects witH previOusly Untreated BRAF-mutant ColoRectal Cancer) is currently ongoing to explore the usefulness of this approach also in first-line (25).