Esophageal cancer is the eighth most common malignant tumor and the sixth most common cause of death from cancer worldwide (1). Surgery still remains to play an important role in treating esophageal cancer. Currently, minimally invasive esophagectomy (MIE) has been widely utilized as an alternative to open esophagectomy due to the fact that MIE could yield favorable perioperative outcomes with similar oncological outcomes compared with open esophagectomy (2,3). Performing MIE was time-consuming with an average time duration of about 4 to 6 hours (4). Unlike during open thoracotomy with wide flexibility, the surgeon was required to keep a nearly fixed gesture for a relatively long time due to the limitation of port design during MIE. Usually, thoracoscopic esophagectomy required longer operative time than open esophagectomy (5), which could increase the workload of surgeons causing considerable fatigue (6). Moreover, for thoracoscopic esophagectomy, there was no proposed standard procedure and port design, indicating that improvement still existed for it. Therefore, ergonomic port design was badly needed for MIE. Moreover, difficulties still existed in maintaining an excellent surgical field as well as meticulous procedures (5,7), especially for dissection of lymph nodes around the left recurrent laryngeal nerve (RLN) and subcarinal lymph nodes. Therefore, here we described our ergonomic port design for easy thoracoscopic esophagectomy as well as our novel procedures of lymphadenectomy via tissue interactive retraction for easy lymphadenectomy in this pilot randomized study.

From January 2018 to December 2018, patients with pathologically confirmed esophageal cancer intended for McKeown video-assisted MIE with two-field lymphadenectomy were randomly assigned into ergonomic incision design group and conventional port design group at one surgical team (Figure 1). Preoperatively, all those patients underwent endoscopy examination, chest computed tomography (CT), abdominal CT, cardiopulmonary function and blood testing routinely, and were evaluated as having a resectable esophageal cancer preoperatively (cT1–3N0–2M0). Data for analysis included demographic data and comorbidities (hypertension, coronary artery disease, diabetes, and chronic obstructive pulmonary disease) as well as clinical and pathologic TNM stage. Perioperative data of in-operating time, blood loss, postoperative hospital stay, major complications (severe pneumonia, anastomotic leakage, RLN paralysis, esophagotracheal fistula), and 30-day mortality rate were also collected and compared. For ergonomic assessment, the pause times of the surgeon forced by fatigue during surgery in the thoracic part were recorded for each patient by one of the authors in the operating room during surgery. Moreover, at the end of the thoracic stage, the surgeon was asked to report his symptoms referable to the musculoskeletal system on a rating score from 1 (uninfluenced) to 10 (maximum fatigue) as described by Shen et al. (6), which was also recorded by the same author. 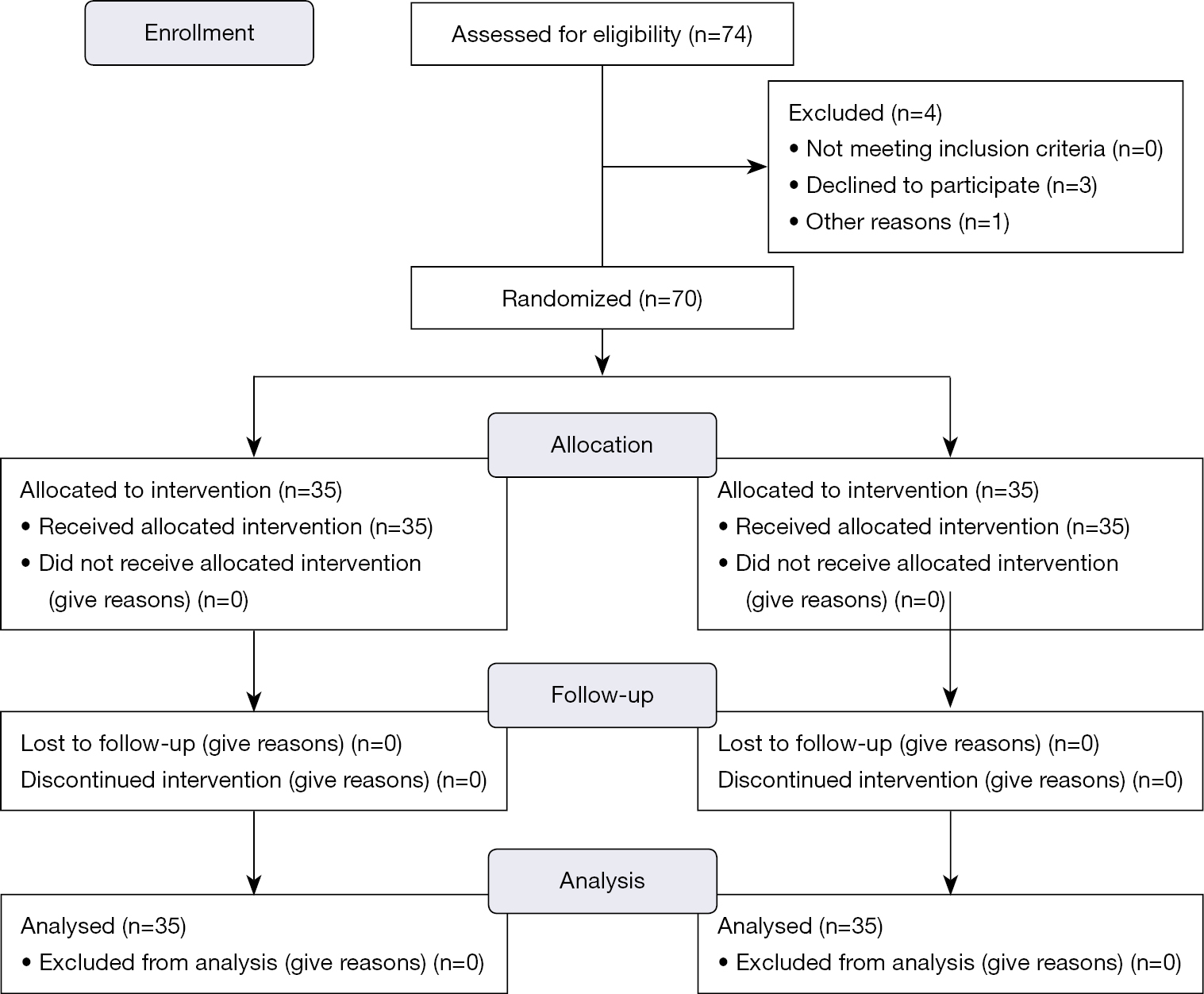 Figure 1 A flow diagram of our pilot study.

Our work was approved by institutional review board of West China Hospital, Sichuan University (No. 20170730) and informed consent was obtained from each patient participating in the study.

After the posterior aspect of the esophagus was dissected, it was pulled laterally and anteriorly by an assistant through the port at the fifth ICS via pulling the surrounding tissues around the esophagus, exposing the left side of the esophagus as much as possible. Because the trachea was attached with the esophagus, both the esophagus and trachea were pulled together via their tissue interactive retraction. Due to the fact that the left mediastinum was deeper in the thorax, the surgeon temporarily utilized the port at the third ICS and port at the ninth ICS to ease the dissection of lymph nodes around the left RLN, which was carefully identified and protected, as well as the left upper mediastinal lymph nodes (Figure 3B).

Surgical techniques in the abdomen and anastomosis

The following procedures in the abdomen and approach for anastomosis were the same for patients in each group. Our port design for abdominal part for both groups was described in detail in our previous study (10). After freeing the stomach and completion of lymphadenectomy in the abdomen, we created a 4-cm-wide gastric tube with a linear stapling device (Johnson & Johnson) with the stomach pulling out through an additional small upper mid-abdominal incision (10). Finally, we performed a layered hand-sewing esophagogastric anastomosis in the left neck for patients in each group.

Data were presented as number and (%) for categorical data or mean ± standard deviation for continuous variables. Student’s test or Mann-Whitney U test was applied to compare continuous variables, depending on normality of distribution; while for categorical data, chi-square or Fisher’s exact test was applied. All statistical analyses were performed using IBM SPSS software (version 22.0; IBM Corp., Armonk, NY, USA). A two-side P value of <0.05 was considered statistically significant.

The flow diagram of our pilot study was shown in Figure 1. Finally, a total of 70 patients were randomly assigned into two groups (ergonomic pot group and conventional port group). There were 35 patients undergoing esophagectomy under ergonomic port design and another 35 patients under conventional port design. The baseline characteristics of the two groups were presented and compared in Table 1. There was no significant difference of age (P=0.453), gender (P=0.584), height (P=0.934), weight (P=0.676), comorbidity (P=0.314) as well as clinical TNM stage (P=0.889) between the two groups. Moreover, there was also no significant difference of pathologic TNM stage (P=0.860), number of total dissected lymph nodes (P=0.543) and positive lymph nodes (P=0.942) as well as total dissected mediastinal lymph nodes (P=0.280) between the two groups. As for perioperative outcomes, there was no significant difference of in-operating time (P=0.283) and blood loss (P=0.651) in the thoracic part between the two groups (Table 2). However, there were significantly less times of forced pause of the surgeon by fatigue during thoracic part in the ergonomic group compared to conventional group (mean time: 1.1 vs. 7.4, respectively; P<0.001). Moreover, the symptom score referable to the musculoskeletal system by the surgeon was significantly lower in the ergonomic group than in the conventional group (2.3 vs. 7.6; P<0.001). Postoperatively, there was no significant difference of hospital stay (P=0.153), rate of complications (P=0.403), and 30-day mortality rate (P=1.000) between the two groups. 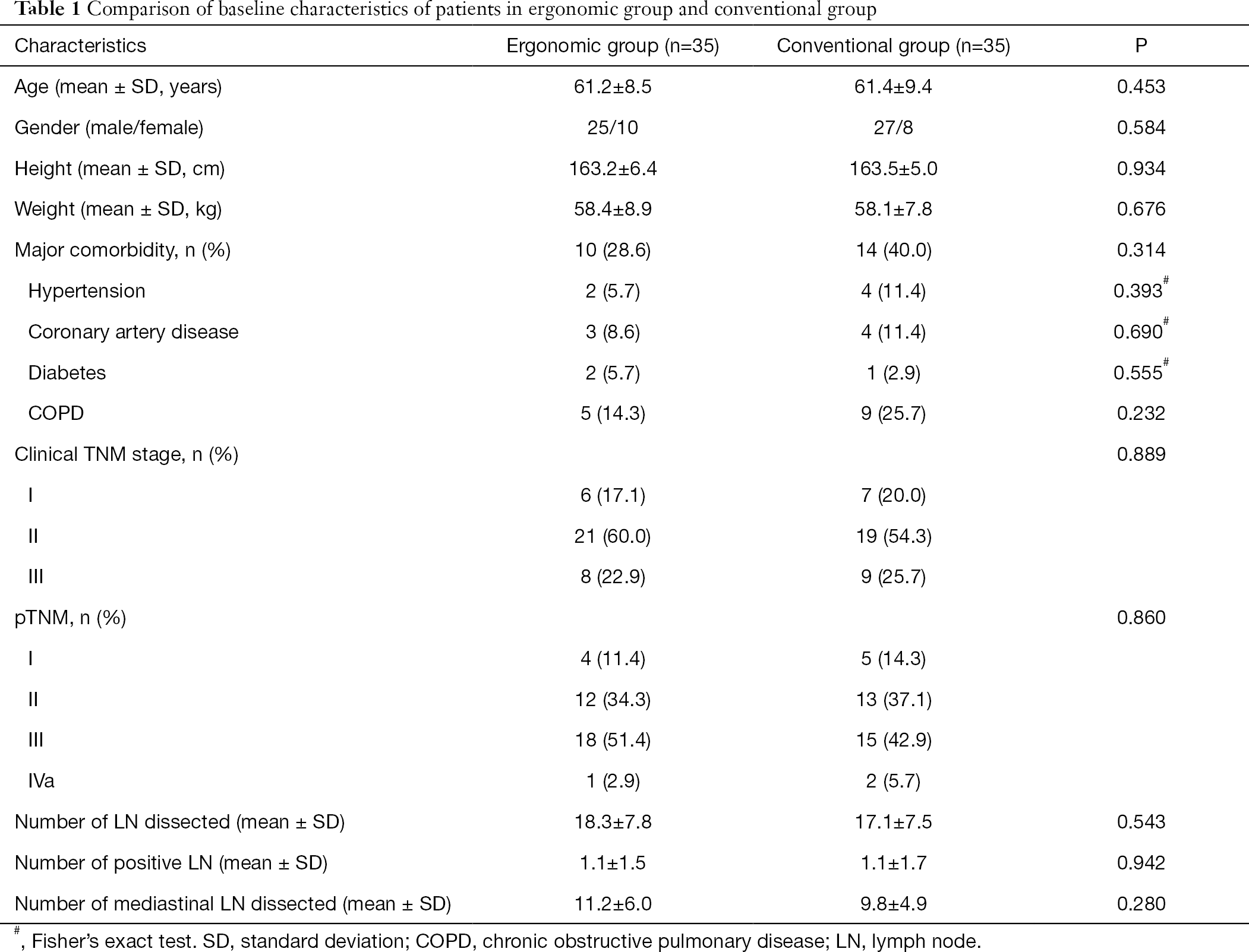 Compared to conventional port design which was widely applied in China, our ergonomic port design could significantly reduce the fatigue of surgeons during freeing the esophagus and lymphadenectomy in the thorax, for the fact that the main working ports were set at the third ICS and the fifth ICS around the posterior axillary line, which were close and parallel to each other, and in this case, the surgeon could put down his hands and did not need to lift his arms with his shoulders kept in adduction throughout the procedure avoiding muscle fatigue, which showed ergonomic benefits for the surgeon. Moreover, difficulty still existed in how to mobilize the esophagus as well as performing lymphadenectomy easily and efficiently, and therefore, improvement of those procedures still needed further research (14). Our procedures of mobilization of the esophagus and lymphadenectomy by utilizing the tissue interactive retraction could make thoracoscopic esophagectomy easier and more efficient. For example, at the very beginning, the arch of azygos vein was ligated at the conjugation of azygos vein and superior intercostal vein and the azygos vein and right superior intercostal vein as well as the arch of azygos vein were clipped respectively without any risk of bleeding, which provided excellent surgical field and grasping point for mobilization of the esophagus. For the dissection of left mediastinal lymph nodes, the esophagus and trachea were pulled laterally and anteriorly via the interactive retraction force between the esophagus and trachea to provide excellent surgical field for easy dissection avoiding injury to the left recurrent nerve. The subcarinal lymph nodes were en bloc resected along with the esophagus from left to right via the interactive retraction of the esophagus and the lymph nodes when pulling the esophagus laterally and then posteriorly, which eased the procedure significantly. In conclusion, our initial experience confirmed those advantages of the ergonomic thoracoscopic esophagectomy with lymphadenectomy in the thoracic phrase.

However, our study still had several limitations. First, this study suffered from the limitation of relatively small sample size, which may limit our analytical power. Second, application of subjective parameter in the ergonomics evaluation could also limit the validity of our results. Moreover, we only presented our initial preliminary results from the pilot study in one surgical team, which may limit the generalization of our conclusions. Therefore, further well-conducted multicenter randomized-controlled trials are needed to confirm and update our conclusions.

Our novel ergonomic port design for thoracoscopic esophagectomy as well as lymphadenectomy via tissue interactive retraction was proved to be safe and viable for ergonomically freeing the esophagus and completing lymphadenectomy in the thorax, which could be mastered easily by most of the thoracic surgeons. Further studies are needed to confirm and update our conclusions.

Ethical Statement: The authors are accountable for all aspects of the work in ensuring that questions related to the accuracy or integrity of any part of the work are appropriately investigated and resolved. Our work was approved by institutional review board of West China Hospital, Sichuan University (No. 20170730) and informed consent was obtained from each patient participating in the study.