Approximately 1 in 4 patients with renal cell carcinoma (RCC) present with metastatic disease, with an additional 20–30% experiencing metastatic relapse after primary surgical therapy for localized disease (1). Despite the high rate of local and/or metastatic relapse, there are no randomized studies to guide therapy. Retrospective studies have shown that patients with metastases have a poor prognosis, however, subsets of patients have shown favorable outcomes, with 5-year overall survival (OS) rates above 70% (2). Specifically, patients undergoing local surgical therapy aimed at controlling metastatic sites have shown increased survival, particularly those with longer disease free intervals and single sites of metastatic disease (3). Traditionally, local metastatic management was performed with surgery and has shown good outcomes, although complication rates can be significant; specifically, overall surgical complication rates of 45.7% and significant grade 3 and 4 complication rates of up to 27.5% have been reported (4). Given its efficacy and similarity to surgery in the metastatic setting (5), some patients may benefit from achieving metastatic control with a non-invasive local ablative therapy such as stereotactic body radiation therapy (SBRT).

SBRT allows for highly conformal radiation therapy to be delivered safely and effectively in a limited number of treatments (typically ≤5) to well defined targets, while respecting adjacent organs at risk (OAR) tolerances due to its steep dose gradients and image guided stereotactic localization (6). For RCC specifically, the high doses per fraction associated with SBRT can overcome radioresistant properties of RCC seen with traditional conventionally fractionated and palliative dose regimens (≤5 Gy) (7). High doses per fraction increase the therapeutic efficacy of radiotherapy by increasing dose-related DNA cytotoxicity, alteration of the tumor microenvironment, and enhancing immunomodulatory effects (8). A previous systematic review identified 389 patients with 730 RCC metastases treated with SBRT, with a weighted local control of 89% (9). Of particular clinical interest are also the systemic effects of localized radiotherapy, including the propensity of SBRT to elicit distant systemic responses (abscopal effect) (8).

The recently published study by Franzese et al. adds to the existing body of literature supporting SBRT in the treatment of oligometastatic RCC (10). This study retrospectively evaluated 58 patients (73 separate lesions) presenting with limited (≤3 sites) metastatic disease and previously resected primary tumors for whom surgical resection was not feasible. Tumors were predominantly clear cell histology (82.7%) and located in the lungs (53.4%), lymph nodes (26.0%) or bones (9.5%). Most patients had single (75.9%), metachronous (79.3%) metastases. Most patients (65.5%) also had received prior systemic therapy treatment. The nominal dose delivered ranged between 18 and 75 Gy (median: 45 Gy) over 1 to 10 fractions (median: 5) corresponding to a biologically effective dose3Gy (BED3Gy) range of 66.6 to 700 Gy. At a median follow up of 16.1 months, the local control at last follow up was 90.2% (clear cell, 89.9%) and 18-month progression free survival (PFS) was 35%. Among patients with clear cell histology, PFS and OS were improved with metachronous presentations and single metastases at presentation for SBRT treatment. Overall toxicities were low; no acute grade 3 or 4 toxicities were observed, and late toxicities were limited to pneumonitis (seen in four patients). The authors concluded that SBRT is safe and effective in oligometastatic RCC and that future studies are needed to assess OS and quality of life.

This study is a welcome addition to the literature and confirms the known strengths of SBRT in the oligometastatic setting for RCC. Specifically, SBRT shows excellent local control and palliation of symptoms, particularly when compared to conventionally fractionated radiotherapy regimens (7,11). It also confirms very low rates of acute and late side effects in appropriately selected patients with a promising potential influence on PFS and OS, particularly among patients with limited metastases, metachronous lesions, and with all known sites of disease treated; this is in line with the surgical literature that shows similar prognostic factors (2,3).

Despite these robust results, several issues remain unclear. The target dose of radiation required to achieve optimal local control and improve survival remains somewhat vague. Optimizing local control remains a focal point of SBRT in the oligometastatic setting, as it can result in the delay of starting a new treatment (in oligorecurrent disease), delay in switching to a new agent (in oligoprogressive disease), and potentially improve OS (in line with previously published surgical and radiotherapy series) (2,3,12). Previous studies have investigated these effects, showing BED >80 Gy (7) and 24 Gy (among patients treated with a single fraction) (11) are needed for significant improvements in local control and palliation to occur. With the critical OARs dependent on metastatic location, standardization of dose and fractionation schedules may need to be tailored by site; recent prospective studies have attempted to extrapolate from successful prior retrospective and prospective experiences in choosing doses that are effective yet safe (Table 1). Achieving a uniform approach to dosing and fractionation will improve the consistency and reliability of clinical results while serving as a true benchmark for future studies. 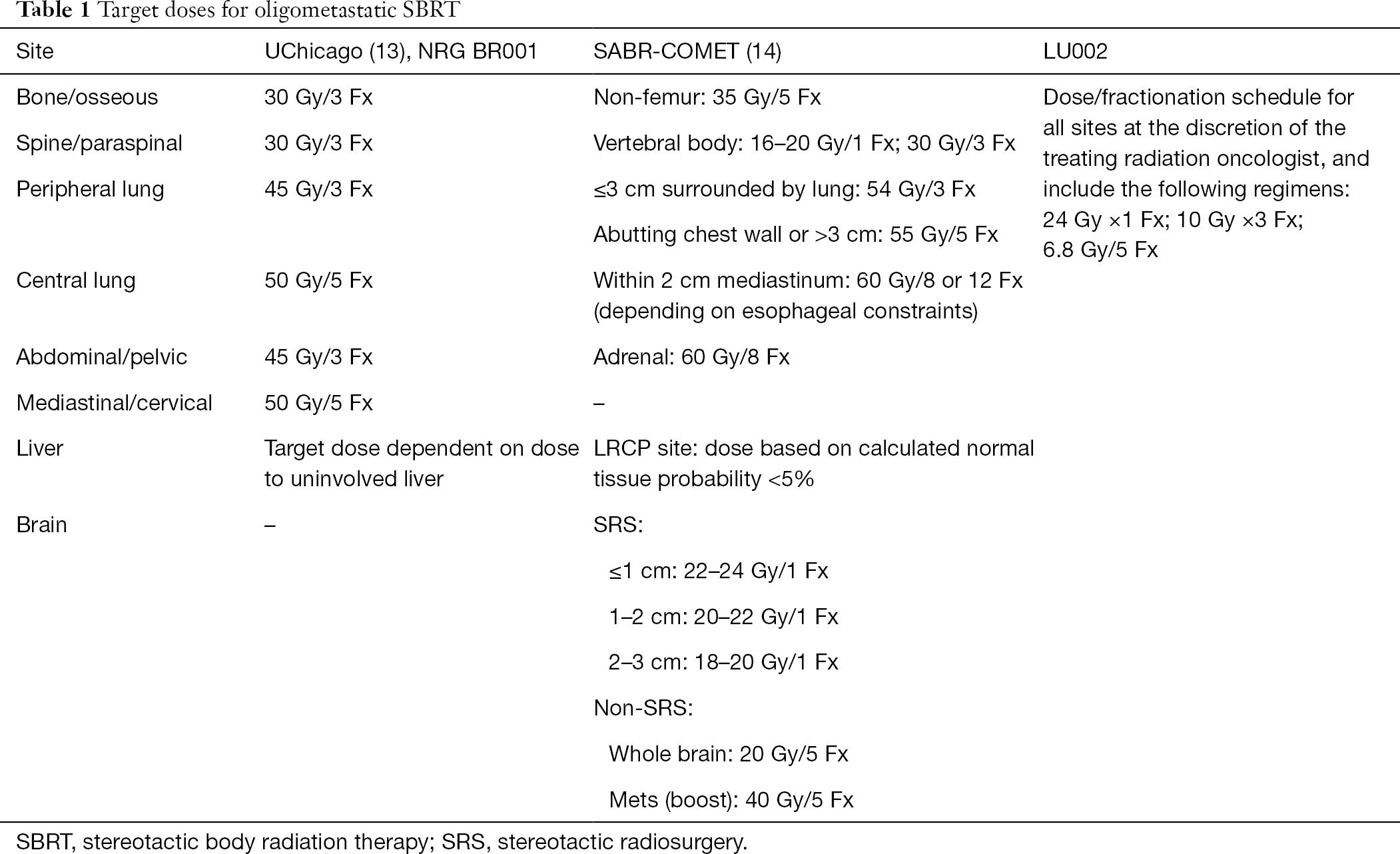 Next, the determination of which patients are appropriate candidates for treatment of RCC oligometastases is also unclear. A recent publication by Dagan et al. suggests most radiation oncologists believe oligometastatic treatment should be limited to patients with an adequate performance status, ≤5 active lesions, where all lesions can be treated in an attempt to achieve local control at all sites (15). Combinations of previously established risk factors have also been used to stratify patients, including the International Metastatic Renal Cell Carcinoma Database Consortium (IMDC) criteria, which uses performance status (KPS <80%), time from diagnosis to treatment with systemic therapy (< one year), hemoglobin concentration (< lower limit of normal), calcium (> upper limit of normal), platelets (> upper limit of normal), and neutrophil counts (> upper limit of normal) to stratify patients into favorable (0 risk factors), intermediate (1–2 risk factors), and poor risk groups (3–6 risk factors) (16). Novel genetic risk scores have also been developed, which have shown promise in stratifying oligometastastic cohorts among favorable and unfavorable disease-free survival (DFS) and OS subgroups (17). Other prognostic variables include synchronous vs. metachronous presentations and limited (single) metastatic foci (10), however these have yet to be formally integrated into any patient selection criteria and are without any consistent specific cutoffs reported in the literature. Moving forward, incorporating such prognostic variables into patient stratification should improve patient selection and identify cohorts who may benefit from intensified approaches.

Should local treatments be utilized in patients with oligometastatic disease, however, treating all sites of disease appears to be the preferred approach, as there is a radiobiologic rational (18,19) and potential for a survival benefit (3,20). Specifically, radiotherapy is thought to alter the local tumor microenvironment by increasing tumor antigen presentation and increasing immune mediated cell death. These changes enhance the systemic effects of radiotherapy responsible for peritumoral and distant responses, even at low doses, while untreated lesions may actually antagonize such responses (18,19). Some have argued that the strategy of irradiating a single metastatic site (rather than multiple) in an effort to engender abscopal responses should be abandoned due to limited evidence of effect (14). While these immunological responses often seen in RCC continue to be evaluated and optimized in preclinical and clinical models, translating these key findings into future clinical trials and studies will help make such systemic responses more frequent and robust.

Additionally, the interaction and optimal timing between systemic therapy and SBRT for RCC remain understudied, and the information we do know underutilized. Although there is no clear benefit to adjuvant treatment after surgery for primary localized disease, several treatments have shown significant benefits in advanced disease (21). With increasingly effective agents, caution should be exercised in balancing the known benefits of systemic treatment and the emerging data supporting definitive local treatment to metastatic sites. And while some may consider sequencing the treatments, the safety of such an approach is unknown; as outlined by Kroeze et al., little is known about the interaction of SBRT with systemic therapies, including immunotherapy, tyrosine kinase inhibitors, and other antibody therapies, with the potential for life threatening adverse events (22). That said, to optimize the synergy between immunotherapy and SBRT, the sequencing and timing of each must be carefully evaluated and administered based on the mechanism of immune modulation (23). Furthermore, enhancing the efficacy of SBRT and systemic therapy combinations also benefits from delivering radiotherapy to all sites of disease, as this approach promotes local tumor microenvironments at each site receptive to immunomodulation, particularly in lesions with few neoantigens and low T-cell infiltrates, with immunotherapy providing the costimulatory molecules and/or cytokines to nurture and support systemic effects (24).

Recent clinical investigations have explored these interactions between systemic therapy and SBRT in the oligometastatic setting. Luke et al. recently published their phase I experience with sequential pembrolizumab 7 days after multisite SBRT in metastatic solid tumors among 73 patients (RCC, n=1) with 2–4 metastatic sites (not all sites were targeted) (25). At a median follow up of 5.5 months, no dose reductions were required, but 6 patients experienced grade 3 toxicities (pneumonitis, n=3; colitis, n=2; hepatic toxicity, n=1). While the objective response rate was only 13.2%, investigators were able to prospectively evaluate toxicity and serve as a baseline for future studies. Within RCC, another Phase I dose escalation trial utilizing concurrent SBRT and pazopanib showed only one dose limiting toxicity (grade 4 hypoglycemia) among 13 patients treated, where the maximum tolerated dose was not reached, and the recommended dose was 36 Gy over 3 fractions (13). Additional ongoing studies include SBRT with agents such as nivolumab (NCT02781506), nivolumab/ipilimumab (NCT03065179), interleukin-2 (IL-2) (NCT01896271), and pembrolizumab (NCT02855203, NCT02599779). These studies should provide additional clinical and correlative biologic data to confirm preclinical findings and help inform the next series of therapeutic studies.

Lastly, the endpoints for treating patients with oligometastatic disease are rigorous, depending heavily on the rationale for the treatment at hand. Recent studies of patients with oligometastatic disease (all histologies) treated with SBRT suggest that OS improvements can be achieved. In a landmark Phase II study by Palma et al., 99 patients with oligometastatic (1–5 lesions) disease were randomized 1:2 to receive standard of care treatment versus SBRT to all metastatic lesions (20). At a median follow up of 25–26 months, the median OS was 28 months versus 41 months (HR 0.57, P=0.09). Despite the increase in adverse events with SBRT [Grade 2+ adverse events: 9% vs. 29%; Grade 5 adverse events: 0% vs. 5% (n=3)], this extraordinary result remains the foundation upon which future studies can be positioned. Using this approach, other potentially meaningful endpoints for patients include the delay in use of further systemic therapy and PFS as well as improving the therapeutic window by reducing severe, G3+ toxicities can be explored. Finally, as patients continue to live longer with systemic disease, validating the early experiences of excellent local control will be essential with extended follow up, particularly with the dose/fractionation schedules yet to be universally adopted.

In summary, SBRT is a promising strategy in the treatment of oligometastatic RCC, and its initial successes are highlighted by Franzese et al. in their recent publication. The historical success of surgical metastasectomy in metastatic RCC makes SBRT an ideal case for patients with inoperable disease, with outcomes suggesting superb local control, limited side effects, and prolonging the need for further systemic therapy. The ideal candidates for an aggressive approach are becoming clearer, with clinical and pathological prognostic models showing great promise in delineating patients expected to have favorable and poor responses. Prospective studies have demonstrated improvements in OS are possible and this should be the goal when a limited number of lesions (≤5) is present and all lesions can be treated safely. Combining SBRT with systemic therapy should be done with caution but may be ideal among high-risk patients with limited lesions treated with SBRT to all lesions or to enhance the systemic effects of radiotherapy among subtotally treated patients. Moving forward, these issues will continue to be further elucidated to optimize the treatment landscape for this complex patient population.