Blood-borne infection is a major concern in transfusion procedures and for health care workers with occupational exposure to patients’ blood (1,2). In recent decades, the human immunodeficiency virus (HIV), hepatitis B virus (HBV), hepatitis C virus (HCV), and syphilis have been the main threats of transfusion-transmitted infections worldwide (3).

In China, blood screening for these pathogens is mandatory for blood donors and essential for most patients under hospitalization. This policy started in the 1990s and effectively decreased the incidence of transfusion-transmitted infection in the next decade (4,5). However, a recent study has reported that the overall positive rates of transfusion-transmitted infection were still 2.11% among 154,038 blood donors in southwestern China (6). This may be due to the window period between onset of infection and completion of seroconversion when serum concentrations of specific antigens or antibodies are insufficient for detection assays to identify a positive result (6,7). Therefore, detection assays of high sensitivity and strong ability in early stage detection are crucial to avoid false-negative results during blood screening.

Currently, enzyme-linked immunosorbent assay (ELISA), electrochemiluminescence immunoassay (ECLIA) and chemiluminescence immunoassay (CLIA) are the most widely used assays in the screening of blood-borne pathogens in China (8). ELISA is a proven method characterized by rapid detection, high sensitivity, and low costs. However, it also has several limitations including inherent instability, lack of automation, and the “Hook effect” (9). ECLIA and CLIA are emerging detection technologies with characteristics of superior diagnostic performance, high precision, good repeatability, and full automation. Xu et al. (10) evaluated the performance of ECLIA and ELISA on HBV detection in 359 serum samples. The results showed that ECLIA had better sensitivity than ELISA in weak reactive samples. Research by Wang et al. (11) indicated that ECLIA could detect positive results earlier than ELISA during seroconversion of HIV infection. Similar results were identified for comparison between CLIA and ELISA (12,13).

One thousand unselected samples and 100 reserved weak reactive samples were collected from residual blood samples of hospitalized patients in Renmin Hospital of Wuhan University on the condition that they met the following criterion: (I) sample volume >1,000 µL; (II) a sample matrix of serum, heparin plasma, or EDTA plasma; (III) age of subject ≥18. Weak reactive samples were identified with Roche Elecsys system and were defined by the cut off index (COI) for each pathogen marker: COI ranges of 0.8< COI <4.0, 0.9< COI <5.0, and 0.5< COI <5.0 were respectively used for the detection of HBsAg, anti-HCV, and anti-TP. The study protocol was in accordance with the Helsinki Declaration and was approved by the Ethical Committee of Renmin Hospital of Wuhan University.

A total of 29 seroconversion panels (SeraCare Life Sciences) were used to evaluate the sensitivity of the two systems in early stage detection (Table S1). Five panels were used for HBsAg detection, 10 for anti-HCV, 2 for anti-TP, and 12 for HIV (anti-HIV-1 and HIV-1 antigen p24). 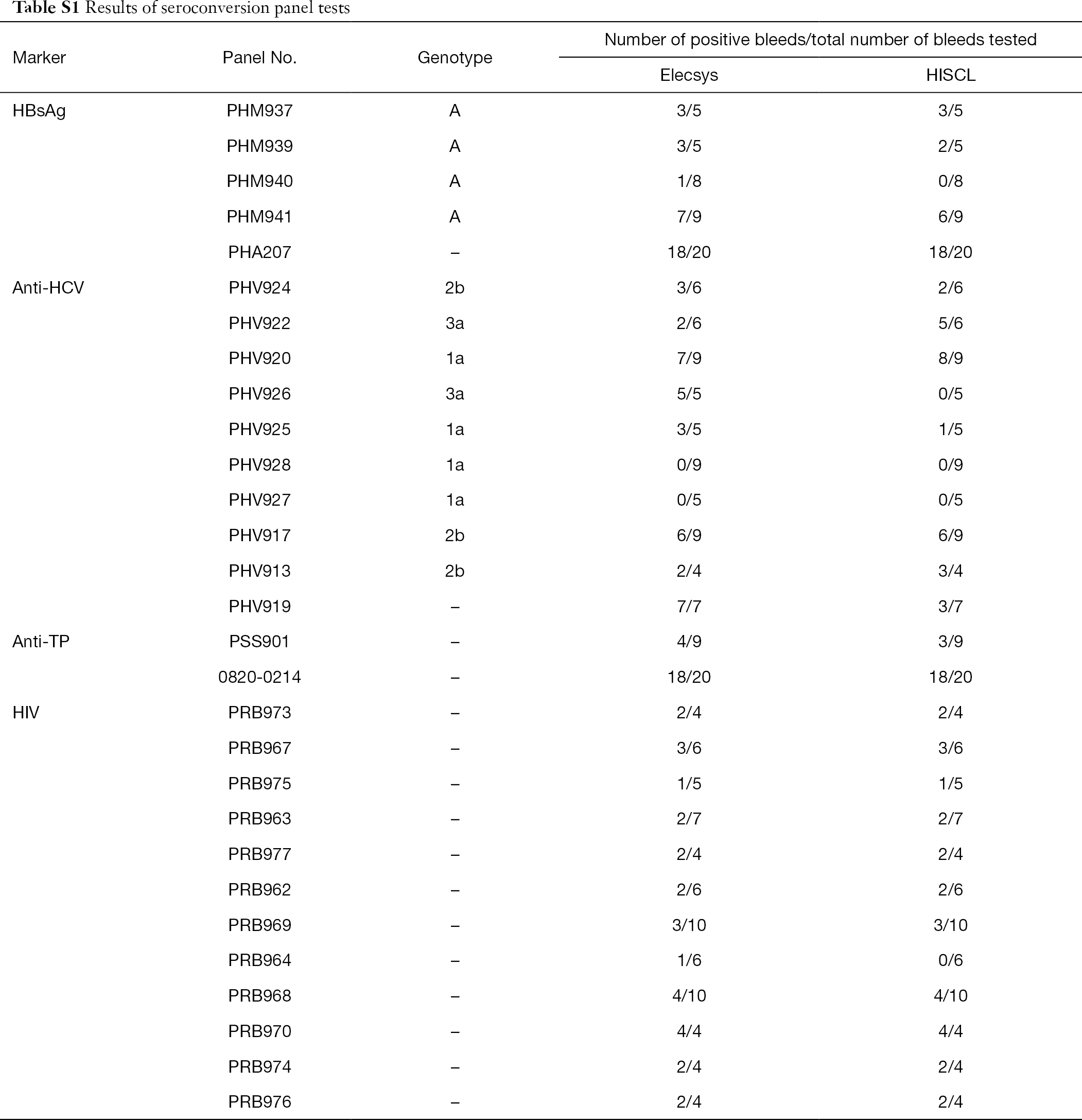 Evaluation of sensitivity and specificity

Each clinical sample was separately tested by the two systems for the detection of four pathogen markers. All clinical samples were masked with a unique blind serial number. For inconsistent results, anti-HCV, HIV, and anti-TP samples were confirmed by Mikrogen Immunoblot Tests or recombinant immunobinding assay (RIBA) method; HBsAg samples were tested by a confirmatory test of each system at first, and then Abbott Architect HBsAg assay (Abbott Laboratories, Abbott Park, IL, USA) was used for final confirmation if necessary (Figure 1). All tests for a single clinical sample were completed within 24 hours. The concordance rate, sensitivity, and specificity of each system were then calculated. 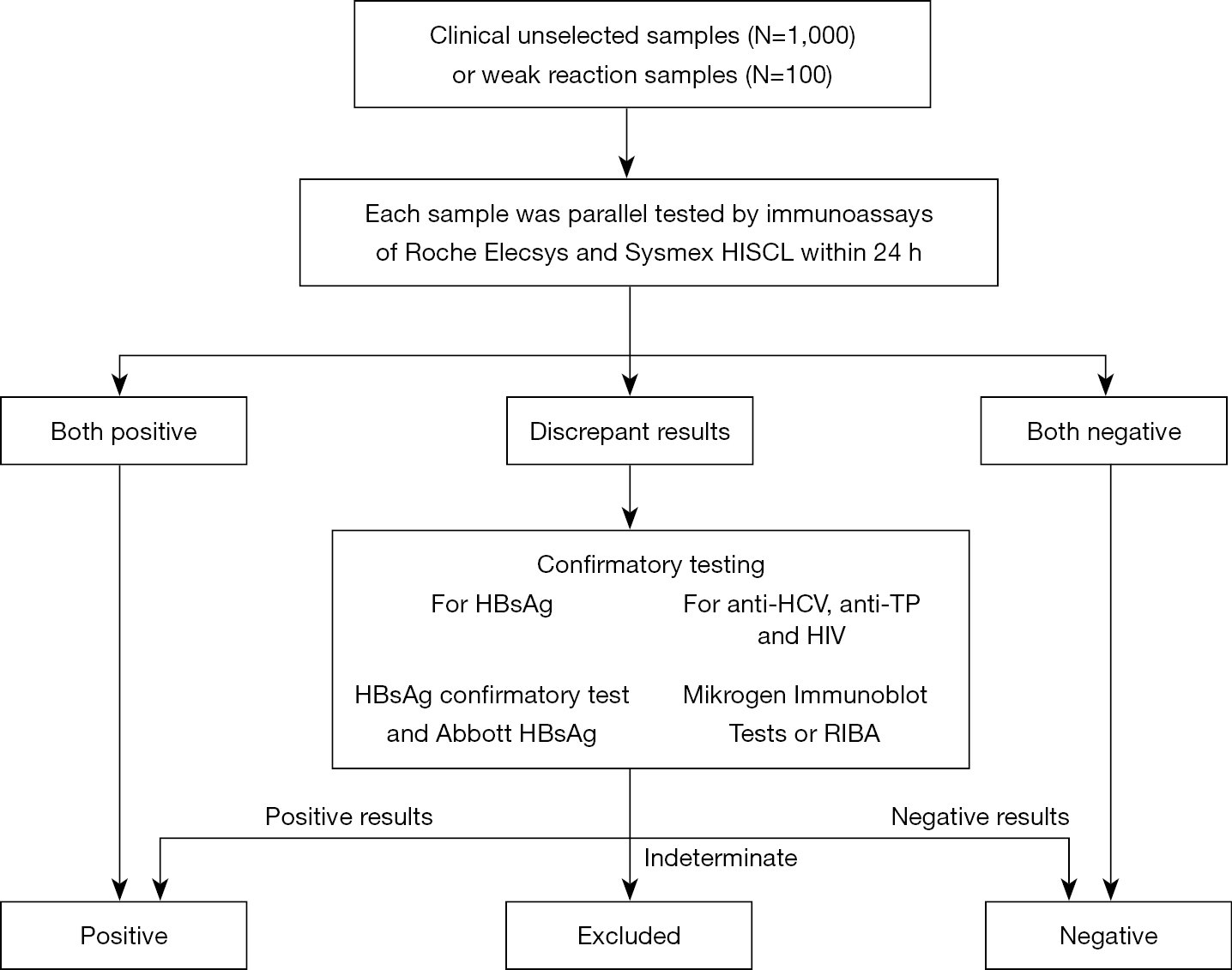 Each seroconversion panel was simultaneously tested by Elecsys and HISCL, and the number of days needed to identify a positive result was recorded.

Simulations of gradient concentration sample were completed by diluting seroconversion panels with negative serum into a series of titers (1:5, 1:20, 1:40, 1:80, …, up to 1:163,840). These simulations were sequentially tested by the two systems until the result turned negative.

Within-run and intermediate precision were assessed according to the CLSI EP15-A guideline (14). Concentrations of high level, medium level, and low-level samples for each pathogen marker were tested by Elecsys and HISCL 3 times a day and repeated for 5 days. Low and medium levels were defined according to precision control standards of Roche Elecsys system. High-level samples were selected from serum samples with high COI value (>100). Coefficients of variation (CV%) were calculated.

Roche Elecsys Cobas e 601 (Roche Diagnostics) and Sysmex HISCL 5000 (Sysmex Corporation) are both fully-automated immunoassay analyzers capable for simultaneous detection of antigens and antibodies in serum or plasma, but their mechanisms in detecting antigen-antibody complex are different. For the Cobas e 601, the immune complex attached to the microparticles is magnetically sequestered on the electrode, and the chemiluminescence is electrically induced and measured. Meanwhile, for the HISCL 5000, demagnetization separation technology is used to separate the immune complex and free impurities and chemiluminescence is then measured by filter switching technology.

The immunoassays used for each pathogen are listed in Table 1. Most of them were qualitative assays with the exception of HISCL HBsAg. 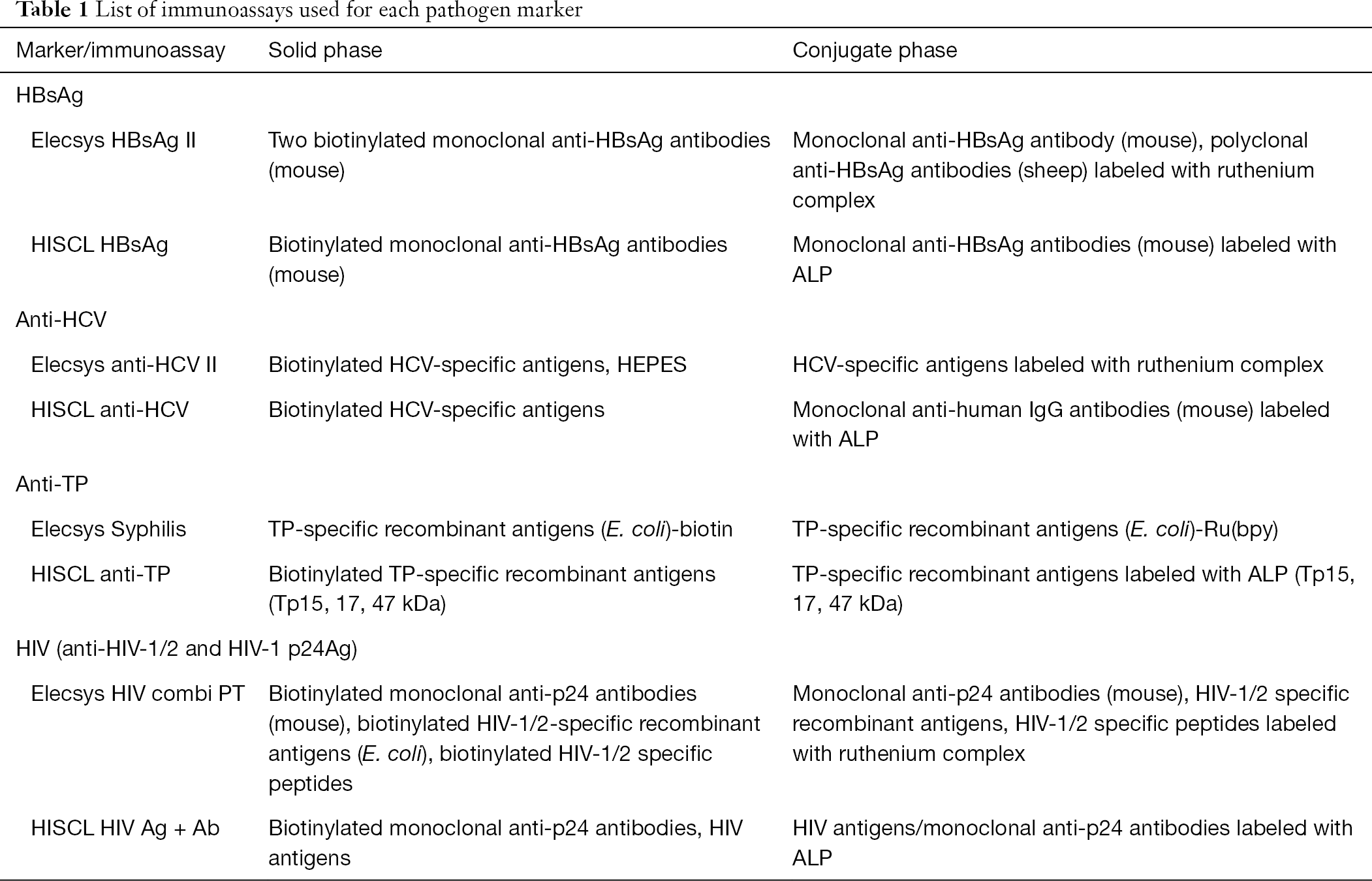 The concordance rates of Elecsys and HISCL were higher than 99% for all pathogen markers in the 1,000 unselected clinical samples (Table 2). A sensitivity of 96.59% for HBsAg and 100% for both anti-HCV and anti-TP was obtained for Elecsys, while the corresponding values were 97.73%, 94.12%, and 100% for HISCL. No positive sample was identified for HIV detection. Both Elecsys and HISCL had an excellent specificity of higher than 99%. Similar results were observed for 100 weak reactive samples (Table 3).

Results of seroconversion panel tests are listed in Table S1. Elecsys could identify a positive result earlier than HISCL in three panels: one HBsAg panel (PHM940), one anti-TP panel (PSS901), and one HIV panel (PRB964). However, the results of the 10 anti-HCV panels were controversial: three panels (PHV919, PHV925, and PHV926) favored Elecsys, while three other panels (PHV913, PHV920, and PHV922) favored HISCL.

Results of precision evaluation showed that both Elecsys and HISCL had a stable performance in all tests in spite of the concentration levels. Within-run and intermediate CV% ranged from 0% to 6.8%, with the results meeting the requirements of the manufacturer.

The screening of blood-borne pathogens is crucial to avoid transfusion-transmissible infections and cross infections in hospital, yet the requirements for optimal detection methods are different in two scenarios (15). For screening in blood donations, sensitivity is the most important property to identify every single sample that is potentially infected. In addition, the capability of early-stage detection is also important since infections caused by these pathogens could be asymptomatic and hard to detect in the window period. However, for regular screening in hospitalized patients, minimizing false-positive results should be considered in order to save medical resources and patients’ utility.

We conducted a comprehensive comparison between Roche Elecsys and Sysmex HISCL in their detection performance on blood-borne pathogens, with reference to ECLIA and CLIA respectively. Results of the unselected clinical samples and weak reactive samples indicated that both Elecsys and HISCL had excellent sensitivity and specificity, and the concordance rate of the two systems exceeded 95% in all tests. Additionally, they were fully-automatic analyzers with good within-run and intermediate precision. Thus, our results suggest that both Elecsys and HISCL are capable of screening blood-borne pathogens, regardless of the property concerned.

Results of seroconversion panel tests demonstrated that Elecsys had a slightly better performance than HISCL in early detection of all pathogen markers except for anti-HCV. Interestingly, Feng et al. (19) compared anti-HCV assays of these two systems and found that Elecsys had a superior seroconversion sensitivity to HISCL (detection rate: 64.62% for Elecsys and 46.15% for HISCL). This advantage may be explained by the difference between ECLIA and CLIA in the detection mechanism. ECLIA yields a specific chemiluminescence reaction initiated by electrochemistry on the surface of the electrode, which is easier to control and more accurate than when initiated by simple mixing of the compound (CLIA) (23). Similar advantages were also observed in dilution tests showing that Elecsys could detect lower titers in several seroconversion panels of HBsAg, anti-HCV, and anti-TP. However, further studies involving samples from different populations are needed to confirm these findings.

Our study had some limitations. First, clinical samples used in our study were retrospectively collected from residual samples of hospitalized patients. Therefore, clinical diagnosis information was not available and could not be used to confirm positive results. Secondly, we did not collect or restrict the genotypes of these pathogens, and so further comparison based on subtypes was not possible. Lastly, no positive HIV samples were collected in our study.

Nevertheless, to the best of our knowledge, this was the first study to compare multiple immunoassays of Elecsys and HISCL in the screening of four common blood-borne pathogens. Our results suggested that both Elecsys and HISCL had superior performance in the detection of HBsAg, anti-HCV, anti-TP, and HIV. The two systems are both adequate for clinical use, but Elecsys probably may have some advantages in early stage detection due to the features of ECLIA.

This study was supported by Roche diagnosis (Shanghai) Limited. The funder was also responsible for the supplement of detection reagents and for the support of corresponding detection technology.

Ethical Statement: The study protocol was in accordance with the Helsinki Declaration and was approved by the Ethical Committee of Renmin Hospital of Wuhan University.