Pancreatic carcinoma (PC) is a leading cause of cancer death worldwide, with the accelerating incidence and mortality in recent years. An estimated 37,685 new cases were diagnosed in United States annually (1). With the increasing complexity of the risk factors, the incidence of PC is rising. Its advanced stage at diagnosis and insensitivity to current therapies makes PC having the poorest prognosis of any major tumor types (2-4). Accordingly, it is imperative to explore new therapeutic targets for PC.

MicroRNAs (miRs) are short (∼21 nt in length) non-coding RNAs, which suppress target gene expression by base pairing with complementary nucleotides in the 3'untranslated region (3'UTR) to induce messenger RNA (mRNA) silence or translational inhibition (5). MiRs are involved in numerous pathological activities, including the development and progression of tumors (6). Some miRs are reported to participate in the genesis of pancreatic cancer. Downregulation of miR-192 could promote pancreatic cancer progression (7). miR-222, miR-182, and miR-454 have been discovered as potential regulatory factors for pancreatic cancer (8-11). Upregulation of miR-19b-3p has been reported in many types of cancers, including lung cancer (12), nasopharyngeal carcinoma (13), and breast cancer. However, the role of miR-19b-3p in pancreatic cancer is unknown. Phosphatase and tension homolog (PTEN) is a well-known target gene of miR-19b-3p involved in many tumorigenesis process (14), and the lipid phosphatase function of PTEN is critical for its anti-tumor activity.

Capan-2 cells were incubated with starvation medium containing 50 nM EdU (Life, China) for 2 h before the endpoint of the experiment. Capan-2 cells were fixed in 4% polyformaldehyde (PFA) at room temperature for 1 h. Then cells were incubated with 0.5% Triton X-100 for 15 min. Finally, cells were stained by Cell-Light™ EdU Cell Proliferation Detection Assay (Life, USA) according to the operating instruction. Numbers of EdU-positive and 4',6-diamidino-2-phenylindole (DAPI)-positive cells (counterstain) were counted under fluorescent microscope (Nikon, Germany). Ratio of proliferative cells were calculated by the ratio of EdU positive cells to DAPI positive cells.

RNA in cells was extracted by chloroform-isopropanol method and NanoDrop was used to determine the concentration of RNA. 400 ng RNA was converted into cDNA by iScripTM cDNA Synthesis Kit (Bio-Rad). The obtained cDNA was diluted 60 times and applied to quantitative PCR (qRT-PCR). Premix Ex TaqTM II (Perfect Real Time) in CFX384TM qRT-PCR Detection System (Bio-Rad) was used for detection. The temperature and time were pre-denaturing at 95 °C for 3 min, then 95 °C for 15 s, 60 °C for 30 s, 72 °C for 30 s. The cycle was repeated for 40 times. 18S RNA and 5S ribosomal RNA (5S rRNA) were applied as internal reference for mRNA and miR normalization, respectively. The primers used were derived from primerbank (https://pga.mgh.harvard.edu/primerbank/). PTEN, Froward: 5'-TGGATTCGACTTAGACTTGACCT-3', Reverse: 5'-GGTGGGTTATGGTCTTCAAAAGG-3'. 18S, Froward: 5'-TCAAGAACGAAAGTCGGAGG-3', Reverse: 5'-GGACATCTAAGGGCATCAC-3'Relative expression levels were determined using the 2‒ΔΔCt method.

Statistical analysis was carried out with SPSS statistics 20.0 (IBM, USA). The data were expressed as mean ± standard error of the mean (SEM). P values were calculated using tests for parametric, and an independent Student t test was used to compare two groups of experimental data, while the one-way ANOVA was used to analyze the results in multiple groups. If there were significant differences among three or more groups, Bonferroni’s test was performed to distinguish groups with significant differences. A significance value of P value <0.05 was set for all tests. 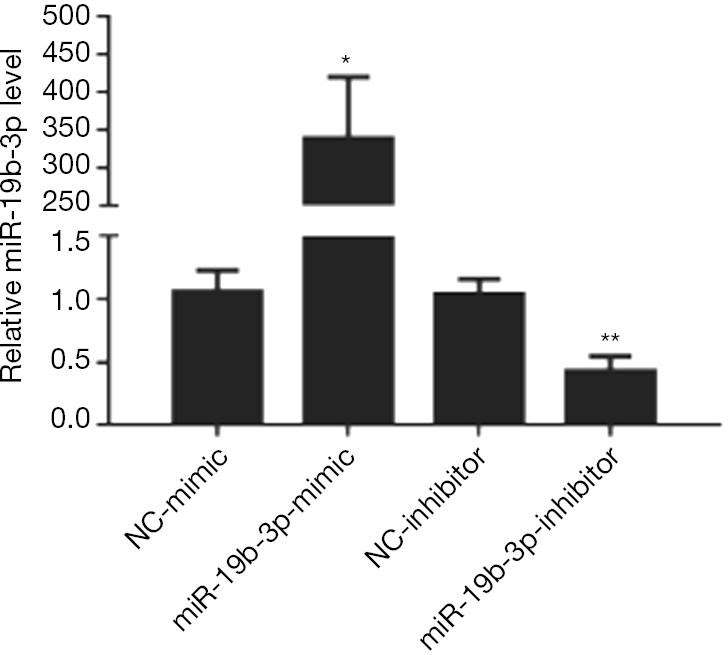 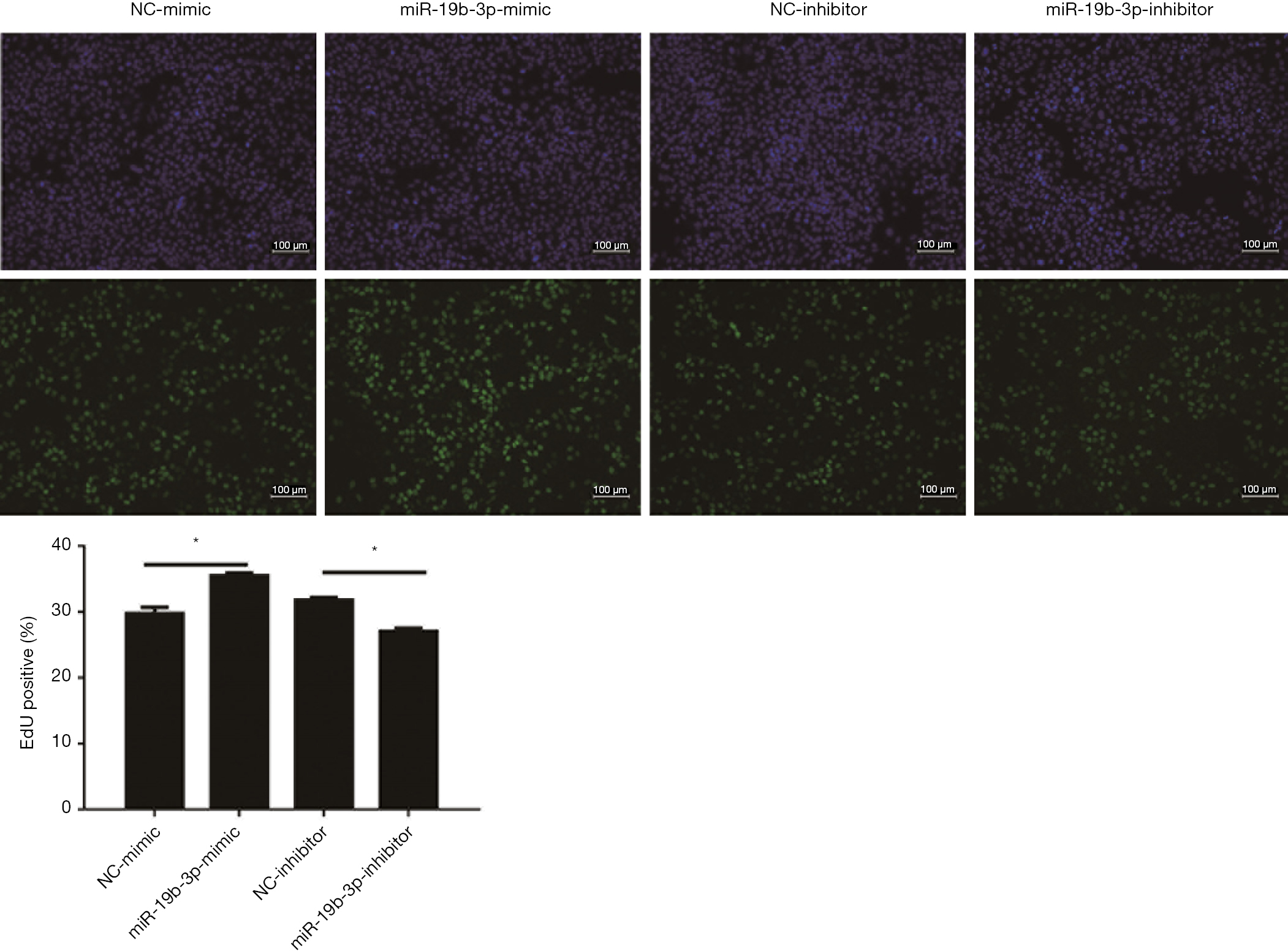 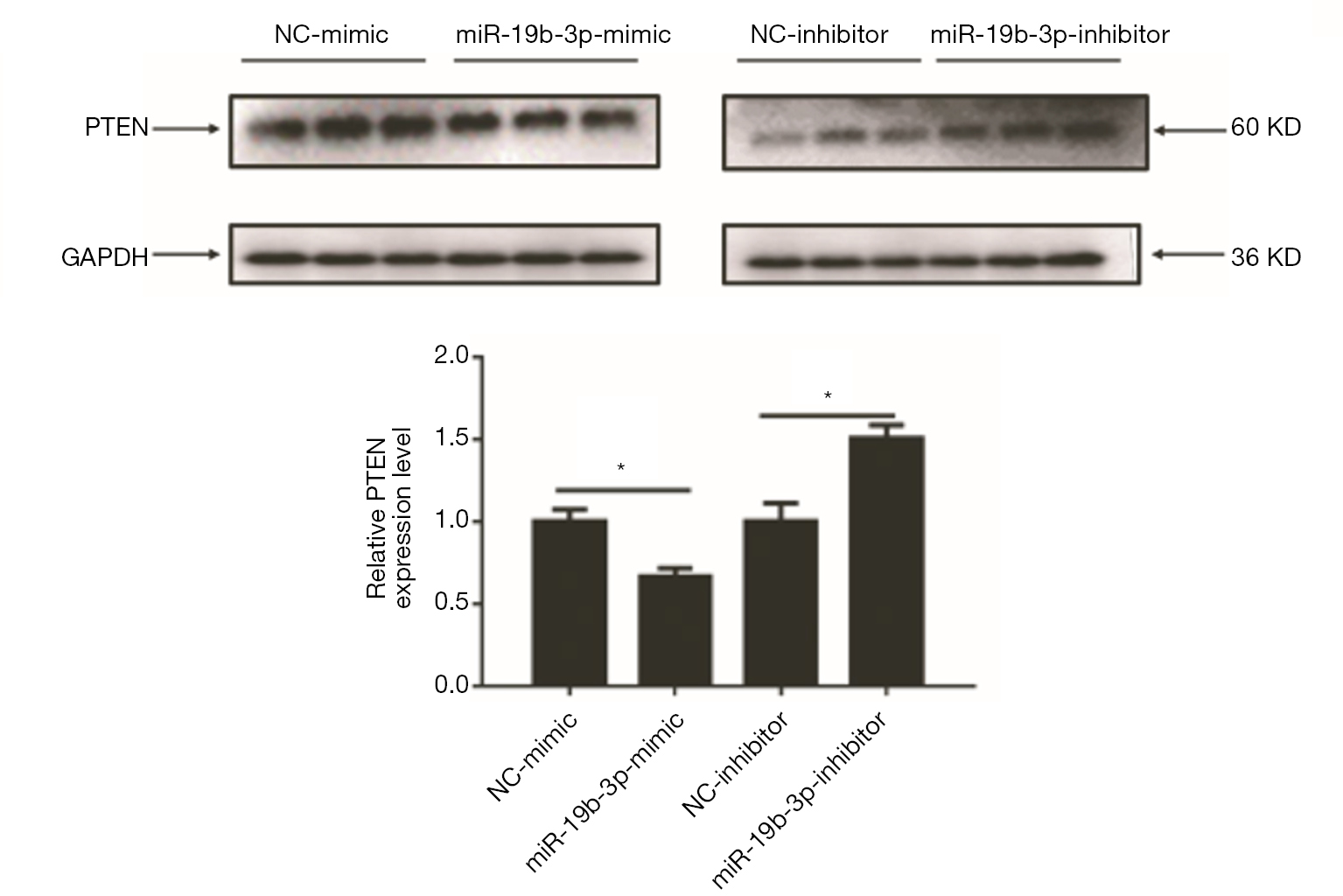 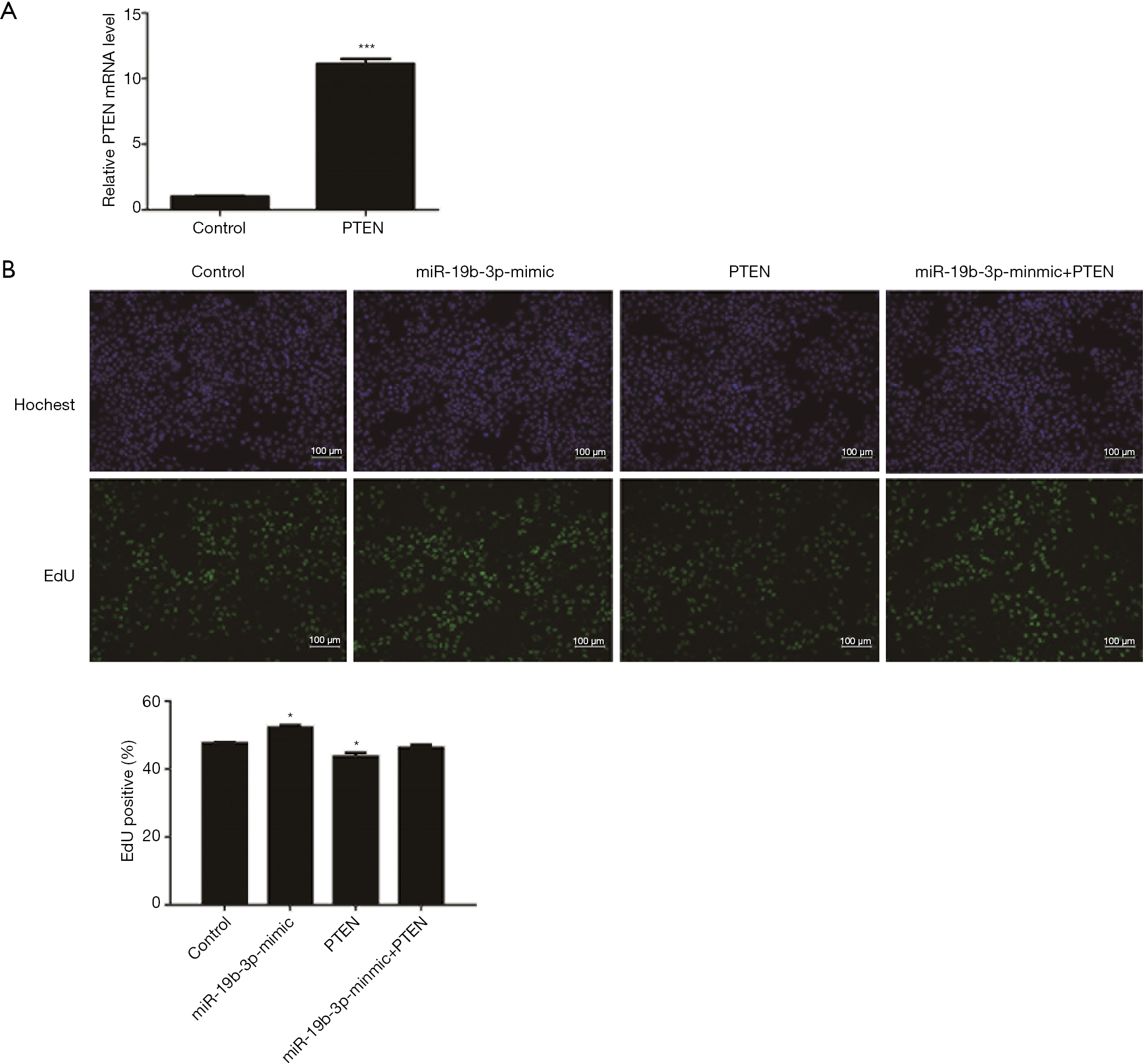 Aberrantly expressed miRs contribute to many biological and pathological processes including cell growth, initiation and progression, apoptosis (18), which indicated the crucial role of miRs in tumor growth and development. miR-19b-3p can be generated by two kinds of stem loop. miR-19b-1 is leaguer of the miR-17-92 cluster, and miR-19b-2 belongs to miR-106-363 clusters. miR-19b-3p has been reported to control cell growth and survival (12,19). miR-19b-3p serves as an oncogene in multiple types cancers, including breast cancer, ovarian cancer, non-small cell lung cancer and colorectal cancer. The role of miR-19b-3p in tumor metastasis and angiogenesis, which is also crucial for tumor development, has also been reported (10,20). Especially, miR-19b-3p could regulate the differentiation and secretory function of β-cells (21), however the expression and contribution of miR-19b-3p in pancreatic cancer are still uncharted.

PTEN deleted on chromosome 10 has been characterized as a negative regulatory factor of the phosphoinositide 3-kinase (PI3K)-akt serine/threonine kinase 1 (AKT) signaling pathway. The most widely discussed anti-tumor activity of PTEN is its lipid phosphatase function (22-24). These could abnormally enhance the signaling, and thereby accelerate tumor cell growth, promote resistance to apoptosis and tumor progression. As a precancerous lesion of pancreatic ductal adenocarcinomas, intraductal papillary mucinous neoplasias (IPMNs) are developed in ductal cell-specific PTEN deficient mice, and the lesions have a more pronounced tendency to progress toward adenocarcinomas. These effects may or may not depend on the occurrence of KRAS proto-oncogene (K-RAS) activation. In IPMN patients, absence of PTEN in situ means poor prognosis and prone to malignant tumors. Besides, proliferation, invasion and mesenchymal-epithelial transition of human pancreatic cancer cells are inducted through PTEN/PI3K/AKT signaling (25,26). PTEN is a reported target gene of miR-19b-3p in other types of cells (27,28). In this study, we further confirmed the negative regulations of miR-19b-3p and PTEN in human pancreatic cancer cells. The functional rescue experiment showed that PTEN overexpression eliminated the pro-proliferation effects of miR-19b-3p mimic in Capan-2 cells. Interesting, some other target genes of miR-19b-3p have been reported, such as glycogen synthase kinase 3 beta (GSK3β), BRCA2 DNA repair associated (BRCA2), and their roles in miR-19b-3p-induced pancreatic cancer cells proliferation need further investigation (20). Nevertheless, this study demonstrates that PTEN is a target gene of miR-19b-3p in Capan-2 cells. Several limitations of the present study should be highlighted. Firstly, different types of pancreatic cancer cell line are required to strength the evidence for the effect of miR-19b-3p on pancreatic cancer cells. Secondly, the expression of miR-19b-3p and its target gene in human pancreatic cancer tissues remains unclear, which can provide more information for understanding the role of miR-19-3p in pancreatic cancer progression.