Pleomorphic carcinoma of the lung: from thin-walled cavity to solid tumor

Pulmonary pleomorphic carcinoma accounts for less than 1% of all lung malignancies. It is more aggressive than other forms of non-small cell lung cancer (NSCLC), and usually presented as a solid mass on computed tomography scan. A thin-walled lung cavity is more suggestive of a benign lesion. A small subset of lung cancer may present with thin-walled cavities with signs like asymmetric thickening wall, septum in cavity and irregular margin. Malignancies including pulmonary pleomorphic carcinoma should be taken into account when differentiating thin-walled lung cavities.

A 39-year-old woman presented to our hospital with cough and intermittent hemoptysis for 2 months. She denied fever, chills, chest tightness and chest pain. Vital signs, including blood pressure and heart rate, were normal. Medical history revealed that she underwent a radical resection of breast cancer which was confirmed as pathological stage I (T1bN0M0) 3 years ago. Then the patient received four cycles of adjuvant chemotherapy with docetaxel and cyclophosphamide. Before the breast operation, her chest computed tomography (CT) revealed a thin-walled (<4 mm) cavity with 3.0 cm × 2.5 cm located in the left lower lobe (Figure 1). The thin-walled cavity was considered to be a benign lung cyst and no further assessment was performed. It remained stable at the second-year follow-up after breast operation. No recurrence of breast cancer was found during the 3-year follow-up period. After the current admission, her chest CT scan showed that the left lower lobe cavity transformed to a 6.0 cm × 7.0 cm solid mass (Figure 2 and Figure 3). Fiberoptic bronchoscopy showed that there was a new organism with a few hemorrhage inside of subsegmental bronchial a (B6a) of dorsal segment of the left lower lobe, and biopsy revealed a small number of spindle cells. Positron emission tomography (PET) show that there was no abnormality in the operation area of left breast, metabolism of left lower lobe mass was increased and hilar lymph node was slightly enlarged. We excluded distant metastasis of left lower lobe mass and recurrence of breast cancer based on the above findings. The primary diagnosis was suggested as malignant tumor. According to all the preoperative examinations, the clinical stage (cTNM) was classified as IIIA stage and there was no obvious contraindication. Then the patient underwent video-assisted thoracoscopic left lower lobectomy, and lymphadenectomy after systemic evaluation. The mass was confirmed as malignant tumor by frozen section during surgery. Postoperative pathological examination demonstrated the diagnosis of pleomorphic carcinoma (a mixture of adenocarcinoma and spindle cell carcinoma) (Figure 4). A total of 10 lymph nodes were removed with hilar nodal metastasis, and the pathological stage (pTNM) was classified as IIIA stage. The patient underwent an uneventful post-operative course and discharged home 4 days after surgery. She was referred to the medical oncologist 1 month later, and only routine chemotherapy was performed according to Non-small Cell Lung Cancer NCCN Clinical Practice Guidelines in Oncology (1). 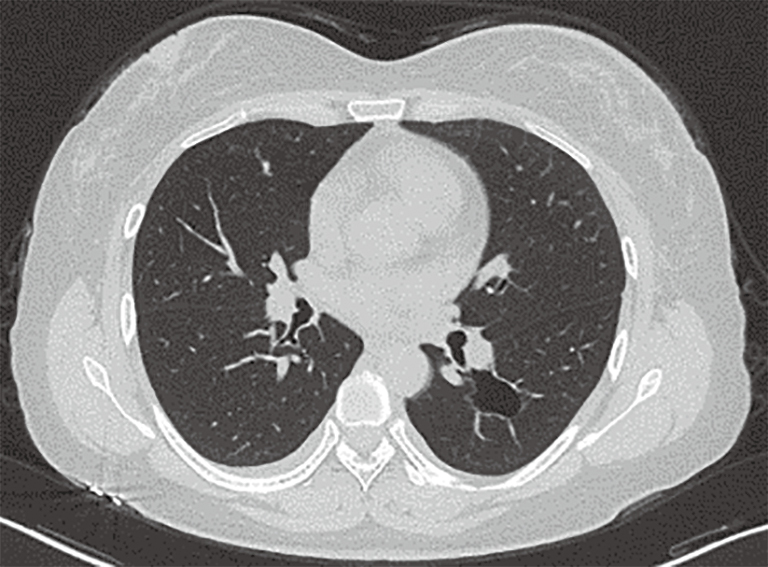 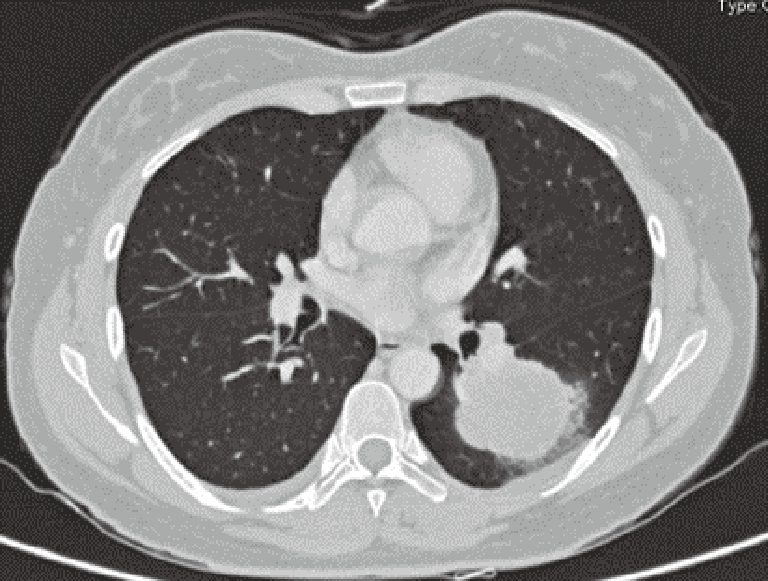 Figure 2 A solid mass in the left lower lobe on CT scan at admission. 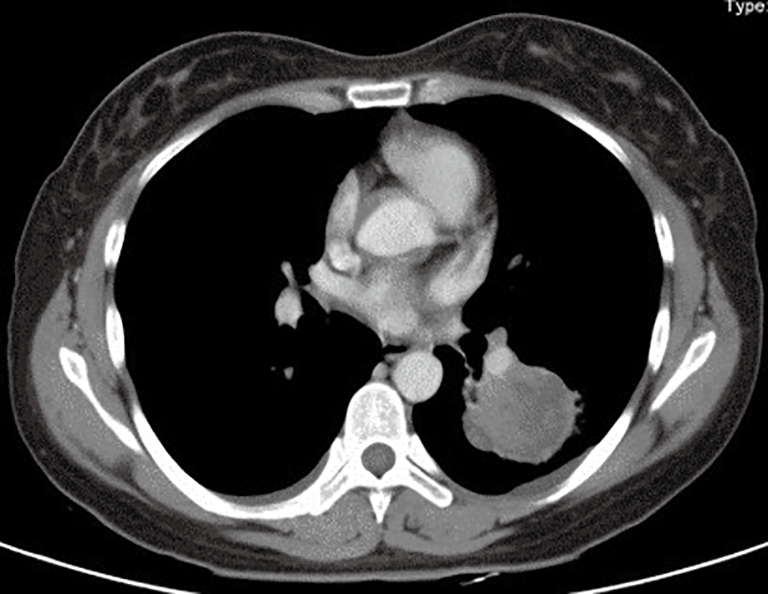 Figure 3 A solid mass in the left lower lobe on CT (mediastinal window) scan at admission. 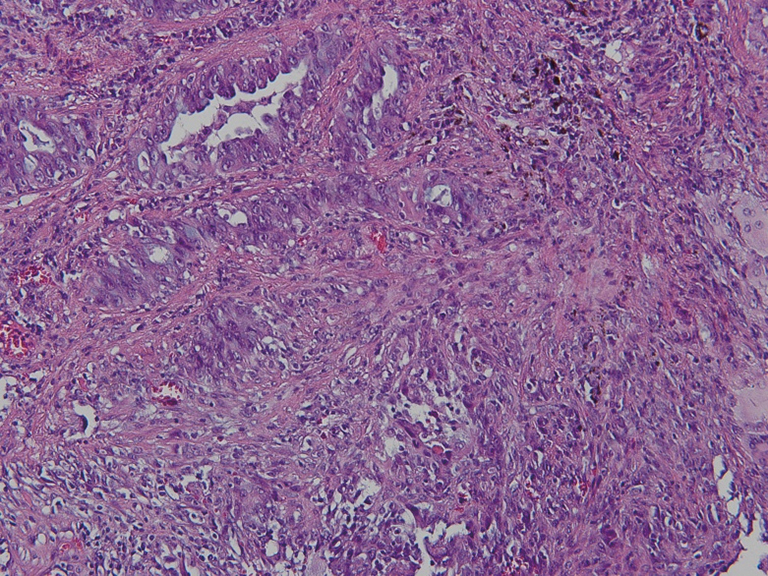 Figure 4 Postoperative section with hematoxylin and eosin staining confirmed the diagnosis of pleomorphic carcinoma (a mixture of adenocarcinoma and spindle cell carcinoma) (×200).

Pulmonary pleomorphic carcinoma is a subset of sarcomatoid carcinoma which accounts for less than 1% of all lung malignancies (2,3). It is defined as a poorly differentiated NSCLC like squamous cell carcinoma, adenocarcinoma or undifferentiated NSCLC with a component of at least 10% spindle and/or giant cells, or a carcinoma only consisting spindle and giant cells (4). The prognosis is worse than other forms of non-small cell lung cancer (3). Surgical resection followed by appropriate adjuvant therapy might improve the survival of these patients (3,5-7).

Pleomorphic carcinoma usually presented as a solid nodule or mass on chest CT scan, and occasionally with a thickened wall cavity inside the tumor (2). Here we report a rare case of pleomorphic carcinoma initially presented with a thin-walled lung cavity. The features of pulmonary carcinomatous cavity on CT scan included wall thickness larger than 4 mm, spiculated or irregular inner and outer margins, enlarged lymph nodes, and sometimes, a soft-tissue mass infiltrating the adjacent chest wall. A thin-walled lung cavity is usually more suggestive of a benign lesion when comparing with irregularly thickened wall cavity. Xue et al. summarized 18 cases of thin-walled cavity lung adenocarcinoma which were more common in the lower lobe (8). All the cases presented with asymmetric thickening wall while more than half of them had septum in cavity and irregular margin. The present case showed thin wall without septum at initiation but finally diagnosed as more aggressive pleomorphic carcinoma. For these thin-walled lung cavities, a strict follow-up observation is required. The present of solid components is a potential sign of invasive malignancy which may require more aggressive intervention.

In conclusion, we report a case of pleomorphic carcinoma initially presented as a thin-walled lung cavity. Although the thin-walled cavity is usually benign, special attention should be paid to differentiate the malignant signs.

Funding: This study is supported by the 1.3.5 Project for Disciplines of Excellence (ZYJC18009), West China Hospital, Sichuan University.